Tianjin is located along the Bohai Sea in Northern China, close to the capital Beijing. The unique geographical location has enabled Tianjin to grow rapidly into an international metropolis and a favorite short-distance travel destination for residents in neighboring Beijing, Hebei Province and Shandong Provincei. It is also a great shore excursion for international cruises travellers who make stops at Tianjin Cruise Port.

Tianjin is a city where the old memories and bright hope both exist. In 1860, the British and French coalition forces captured Tianjin, and Tianjin was forced to be the first port trader. In the past, the concessions of various countries have survived and become a large-scale European-style ancient building complex. These buildings are clustered on the Five Avenues of the city, carrying the memories of the people of Tianjin while the modern and promising Binhai District at the coast shows the splendid future of the city.

Till now, Tianjin still has been developing steadily and creating its own ethos which is implied in the antique cultural street, mouthwatering snacks and food, unique cross talk shows of “Xiangsheng”, regardless of the oppressive impact from the capital Beijing, which is only 30minunte’s train ride away.

Latest News: Beijing applies to the 144-Hour Visa Free Transit policy. Travellers who holding valid passport and connecting flight/cruise to the third country or region (HK, Macao) can travel in Beijing without visa up to 6 days.

Following are some useful travel guide and articles about Tianjin, including top attractions and things to do, transportation, weather, maps, etc. Since we are local, really know the destination well, and have mastered the best way to travel, so you can completely rely on our local expertise and experience. Contact us to plan your trip in Tianjin here>>

Tianjin Top Attractions and Things to Do

Huangyaguan Great Wall is praised as a miniature of the Great Wall of China because you can see the features of many other sections of Great Wall - "strong" of Badaling, "steep" of Jiankou, "ancient" of Gubekou. Located in the mountainous area of Jixian County, 126 km away from Tianjin City, it is also not crowded. Here you can enjoy a hiking about 2 hours (about 2150m) from the east section to the Huangyaguan Pass on the west.
Recommended tour: 2 Days Tianjin Huangyaguan Great Wall Tour

The Five Great Avenues, or Wu Da Dao are 5 parallel streets where there are over 230 houses of all kinds from the architecture of Britain, France, Italy, Germany and Spain, which make it reputated as the “World Building Exposition”. It used to be concessions during colonial period. Nowadays it is a charming cityscape in Tianjin city. You could either take a horse-drawn carriage or walk down the avenues to appreciate the architecture and experience the local life. 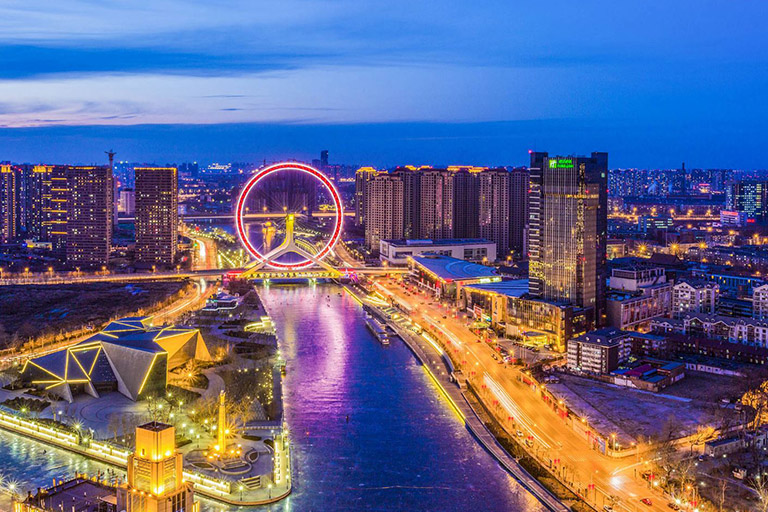 Tianjin Eye is a 120-meter tall giant ferris wheel built over the Haihe River. Not being as famous as the London Eye, but it is the only ferris wheel in the world built on a bridge, providing an interesting 30-minute ride in an air-conditioned car encircling the wheel. Atop the wheel, you’ll get great views of the spiraling metropolis of Tianjin and capture fantastic view of Haihe River. The wheel is lit with colorful LEDs that reflect onto the river below in night either.

Ancient Culture Street is a Place where you can enjoy the special architectural styles, purchase folk crafts, and taste local snacks. It is a great place to look around and buy something you wouldn’t see anywhere else. There are many little stores and shops selling everything from small to big, modern to traditional. Among all stores, Yangliuqing Painting Galley and painted clay sculpture of Clay Figure Zhang are most famous. All goods are genuine and affordable. 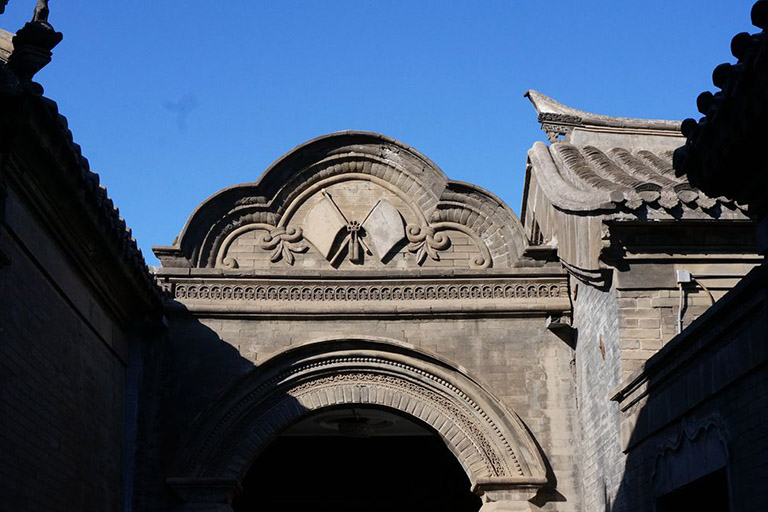 Shi Family Mansion is a large and well-kept civil residence made up of 12 ancient-style quadrangle courtyards, elegant pavilions, pools and gardens. The architectural style and decorations fully represent the folk culture and custom of the late Qing Dynasty and show the 200-year-long history of the Shi Family in Yangliuqing. Now it serves as the folk custom museum with a large collection of folk arts like Yangliuqing New Year pcitures, brick sculpture. 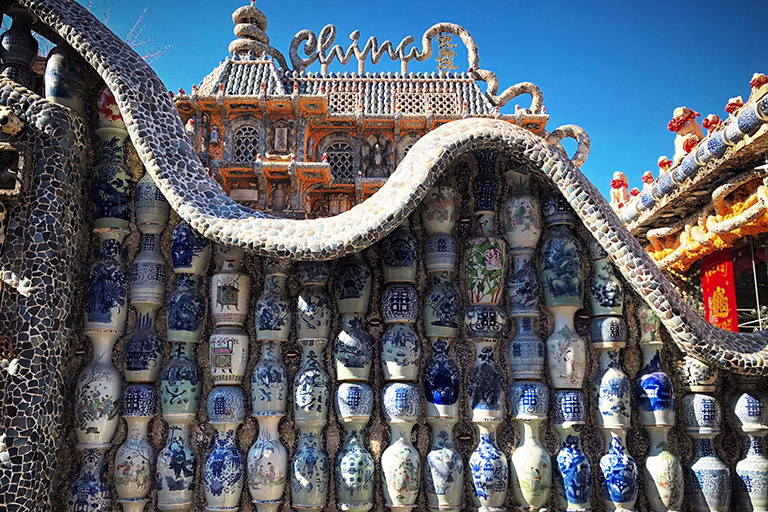 Porcelain House is an historic house-turned-museum. Decorated by antique collector Zhang Lianzhi, it is a true gem among the flashy billboards and touristy food streets in downtown Tianjin. About 80 percent of the materials used are damaged antiques spanning from Tang through Qing Dynasties. The exterior of the house is lined with porcelain vases, while the interior exhibited various wooden antiques, as well as porcelain mosaic art.

Jingyuan is the former residence of Puyi, the last emperor of Qing Dynasty. It was named after the emperor who try to strengthen himself with noble spirit by living in a peaceful place with lush flowers, mazy corridor, rugged rocks and clear spring, just like an hidden world. The complex consists of the main building, library, servants’ chamber, kitchen and garage. The rooms in the building were decorated in a rich and elegant way, each with a very large area. 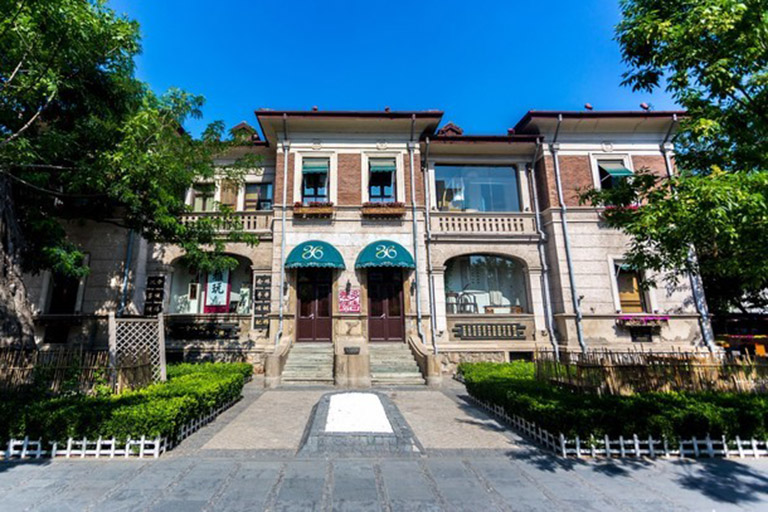 Italian Style Street is a tourist resort of Italian style. It was formerly known as the only concession outside of Italy, and now is a unique large Italian-style building in Asia. For the unique location, the Xin Yi Street is merged with different cultures. It is worth a visit on a nice day for stroll and something to eat or drink at the many street side cafes, people watch, small number of market stalls. A visit here will remain you of Shanghai, or could be a taste of Europe in China.

Below are some helpful articles written by our Tianjin travel experts to help you learn the essential things to know before you go, regarding tour planning, visa, airport layover, accommodation, etc. If you have any question or tour idea, please don't hesitate to contact us. We are always ready to help. 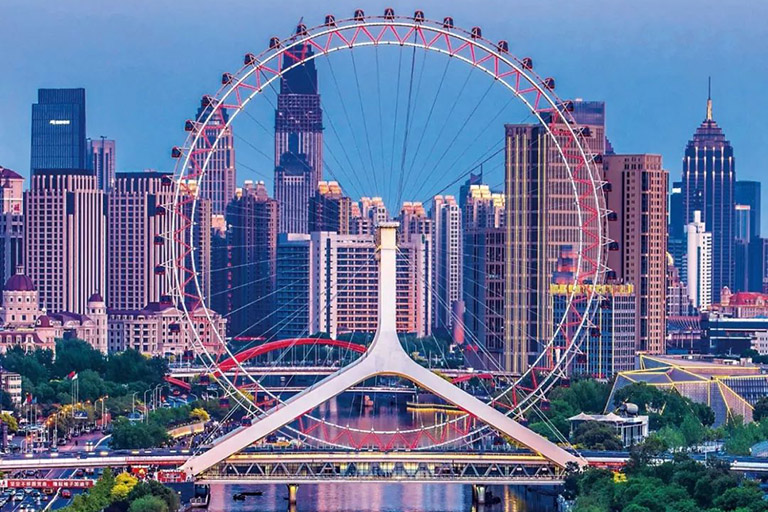 How to Plan Tianjin Tour

Usually only 1 day or 2 days to visit Tianjin. One day to visit the city landmarks, such as Tianjin Eye, Porcelain House, Ancient Culture Street etc., and try some local snacks and food. If you have one extra day, you can go to hike Huangyaguan Great Wall. Actually, travellers rather taking side trips to Beijing than spending all time in Tianjin. 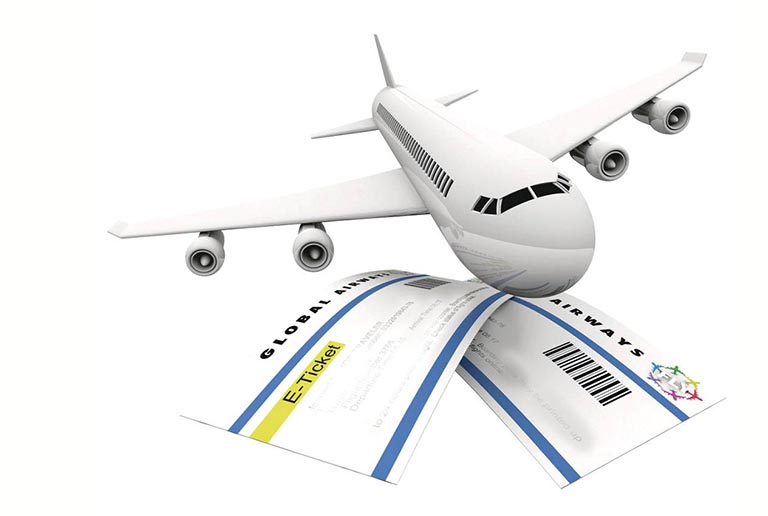 Foreign travellers of 53 countries holding valid international travel documents and connecting flight or cruise tickets to a third country or region (your country/region A --> Tianjin (Beijing-Tianjin-Hebei) --> country/region B), are allowed to apply Transit Visa Exemption after arrival, and stay up to 6 days without in Tianjin, Beijing and Hebei Province. 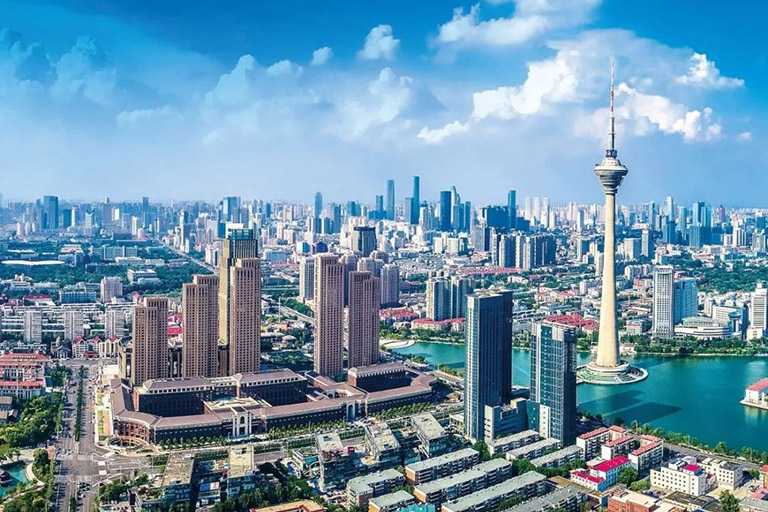 Tianjin has a semi-moist continental monsoon climate. It is windy and dry in the spring, hot and rainy in summer, cool in the autumn and cold and snowy in the winter. The annual average temperature is 12 °C. Tianjin is suitable for travelling all the year round. While, the natural sceneries are the most beautiful during spring (mar~may) and autumn (sept~nov). 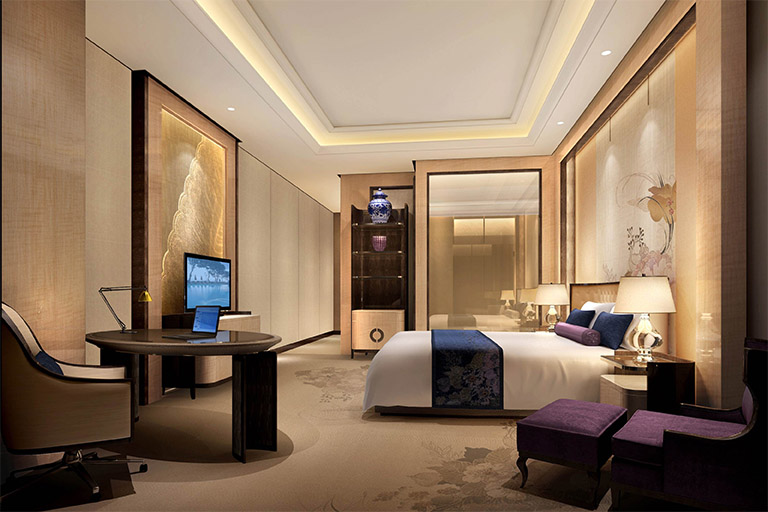 How to Get to & Around Tianjin

From the transportation choices' point of view, Tianjin even provides even more flexibe choices of transportation tools than Beijing. It not only operate numerous flights, trains and highways like Beijing, but also has the largest coastal port in China. Currently Tianjin has one international airport, one international cruise port, 8 railway stations, 7 subway lines and hundreds bus stations. To know more transportation information of Beijing, please check how to get to & around Tianjin!

How to Get to Tianjin

There is only one airport in Tianjin - Tianjin Binhai International Airport. Currently there are nonstop, stopover, and connecting flights from about 50 cities in different countries and regions to Tianjin Binhai International Airport, such as London, New York, Los Angeles, Paris, Toronto, Sydney, Singapore, Tokyo, etc. It is also widely connected to more ethan 100 cities in mainland China, including the major cities and hot tourist destinations such as Shanghai, Xi’an, Hangzhou, Guangzhou, Chongqing, Chengdu, Guilin, Kunming Zhangjiajie…

Tianjin Port operates international cruise routes from South Korean, Japan and Russia. The most popular vessels which cruise around the Asia Pacific include Costa Cruises, Carbibbeans, Voyager of the Seas, Sapphire Princess, Holland America Volemdam, Oceania Nautica etc. The cruise port locates about 140km away from Beijing, about 70km away from the downtown of Tianjin. Location: No. 1001 Guanhai Road, Binhai New District, Tianjin天津市滨海新区观海道1001号

Travel Between Beijing and Tianjin

Beijing and Tianjin are only 125km away from each other, with hundreds high speed trains and buses transferring between two cities each day. The 144-Hour Transit Visa Free Policy allows travellers stay in Beijing and Tianjin up to 6 days without a Chinese visa. Usually it takes about 3~5 days to visit both Beijing and Tianjin. You are suggested to stay one day in Tianjin and spend rest of your time in Beijing as Beijing has much more things to do than Tianjin.

-Private tour: traveling with a private tour arranged by China Discovery is strongly recommended if you want to enjoy a worry-free and leisure vacation in Beijing and Tianjin. Itinerary and tour service can be customized according to your requirements.

-Subway: recommended for independent travellers. Tianjin has 6 subway line, connected to train stations, airports, cruise port, shopping streets and some attractions, usually operating from 6am to 11pm. You can take Line 2, 3 and 9 to Tianjin Railway Station from which many attractions are within walking distance, such as Italian-Style Street, Wudadao, Ancient Culture Street, etc.

-Bus: Public bus serves wider larger area of Tianjin than the subway, but you need to do a lot of homeworks if you can’t read and speak Chinese. Usually costs around CNY 2~20. There are buses to Beijing from Tianjin Tongsha Bus Station (天津通莎客运站).

-Taxi: Cheap by Western standards, and sufficient when it is not rush hours. Recommended for short distances ride.

-Cycling: Most places in Tianjin are flat and allowed to cycle. You'd better only ride the wide and less crowded roads.

-Car rental: not recommended, as it is much challenging and hazardous for foreigners who are not aware of the complicated Chinese road conditions and driving rules.

To help you know better about location, airports, railways, train stations, cruise port, subway and tourist attraction of Tianjin, here we have prepared some useful Tianjin maps for you. Please click detailed maps below. 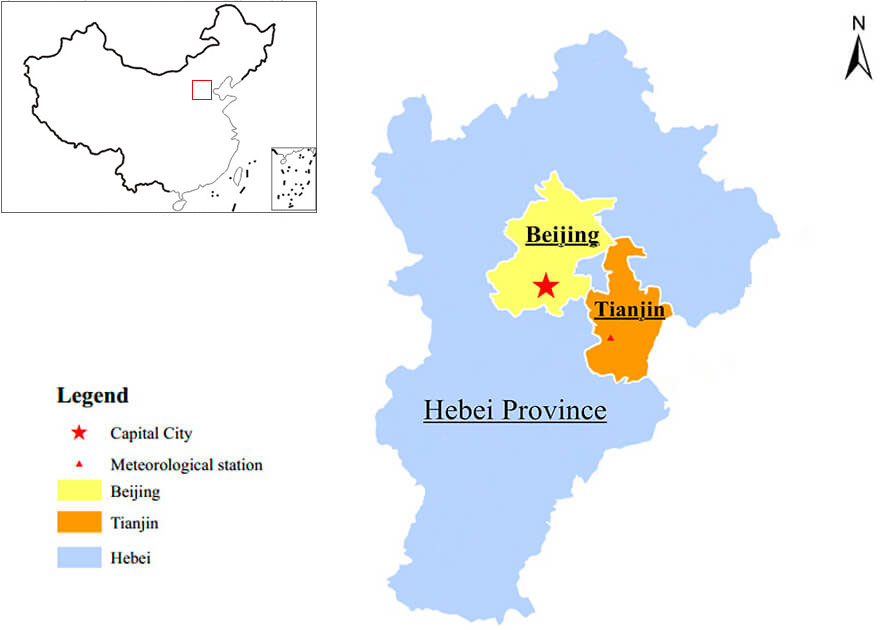 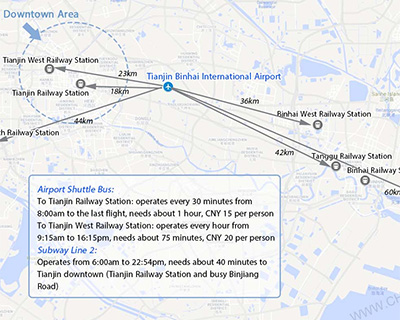 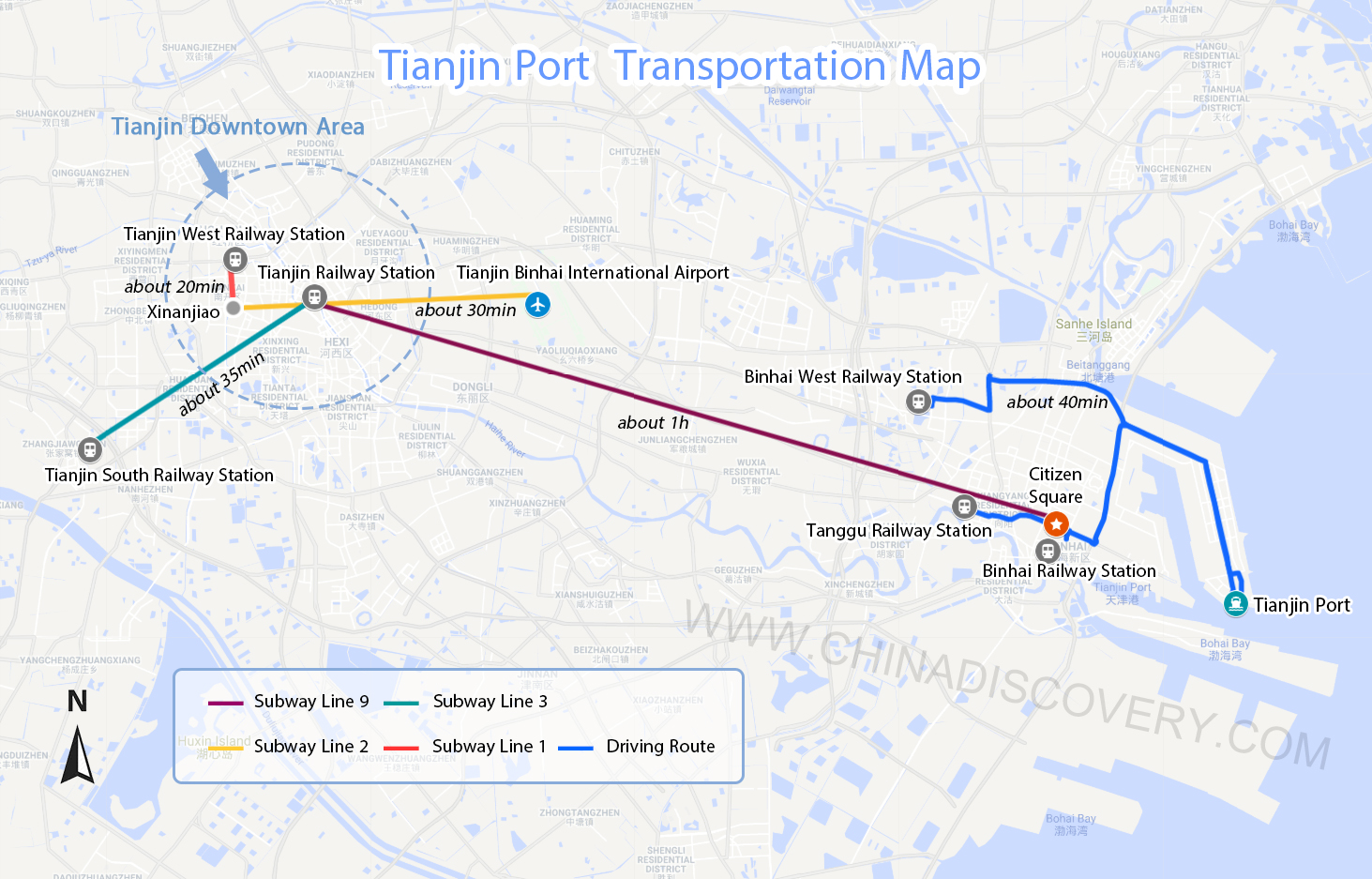 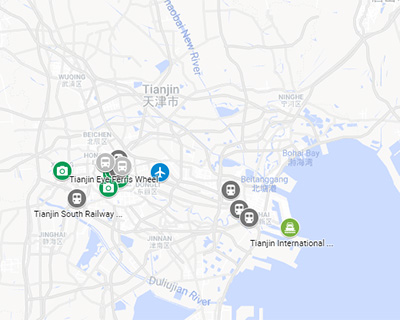 If you are seeking for a short break in Tianjin, you can have a day tour in the city to explore the landmarks of Tianjin Eye, Porcelain House, Wudadao, Italian Street, Ancient Culture Street. While we recommend 2 days to explore more highlights of Tianjin, such as Great Wall, Dule Temple, etc. It is strongly recommended to travel from Tianjin to Beijing to see the Forbidden City, Mutianyu Great Wall, Summer Palace and enjoy a Peking Duck dinner if you have 2 or more days layover in Tianjin. You can even extend your trip to Xian to discover the Terracotta Warriors if you have 3 or 4 days. If you have a layover in Tianjin during winter, you can also take a flight or train to Harbin to enjoy the party of International Ice and Snow Festival. All of your expectations can be tangible in our Tianjin tours. We are also specialized in tailor-made tours that fit you best according to your own interests, requirement, traveling time, etc. 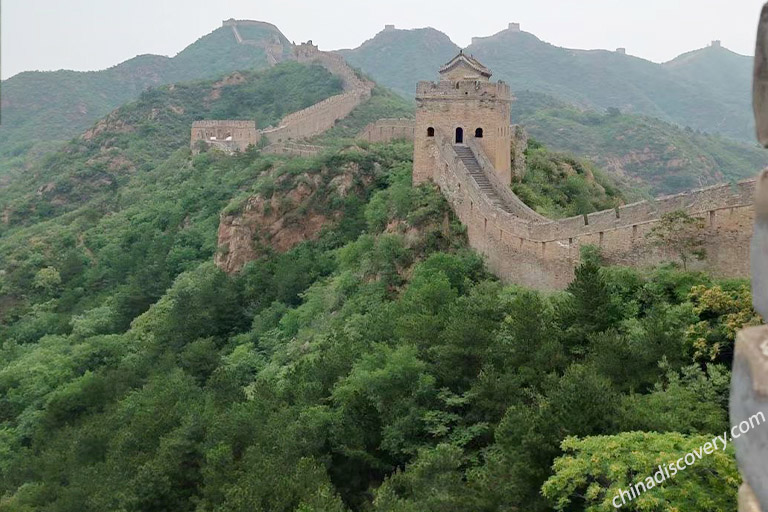