Because the outbreak and spread of “COVID-19”（Corona Virus Disease 2019) in Wuhan, lots of trains, high speed bullet trains and normal trains have been stopped in many cities. Tourists can get free cancellation wherever tickets were bought. China Discovery kindly remind you avoiding going out. When in public occasions, you must wear a respirator all the time, such as when taking a train at train station, taking a metro, etc. And remember to wash hands frequently and do proper disinfection.

You can contact us to check the latest train schedules and get more useful advice! 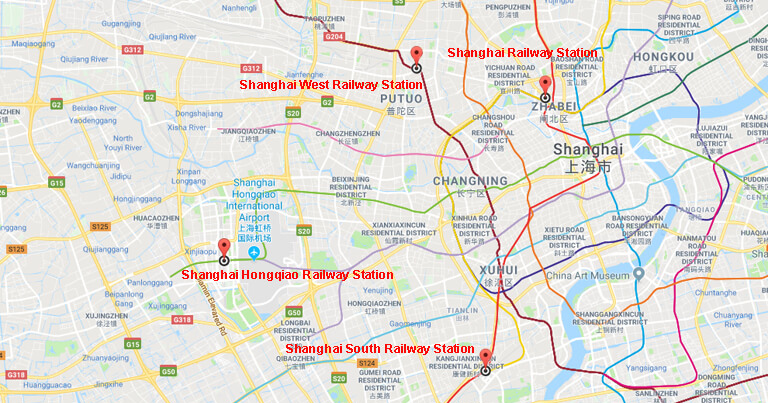 There are 4 floors in the building of Shanghai Hongqiao Railway Station. The first underground floor (B1) includes station exit and connections to other forms of transportation. There is also some fast food, like KFC, Dongfang Jibai, Gongfu etc. There are also available Automated Ticket Machines (only helpful to people with Chinese ID card) and ticket windows. The first floor (1F) is the platform layer and travelers transit through here to the second floor. The second floor is the departure hall, containing ticket windows, waiting hall, checking gate etc. The third floor is the commercial layer selling food, drinks, souvenirs, etc.

Checking Gate: All checking gates are equipped in the waiting hall with a small electronic board which displays the present and next checking information.

Exit: There are six exits in Shanghai Hongqiao Railway Station, and each platform has access to a corresponding exit. 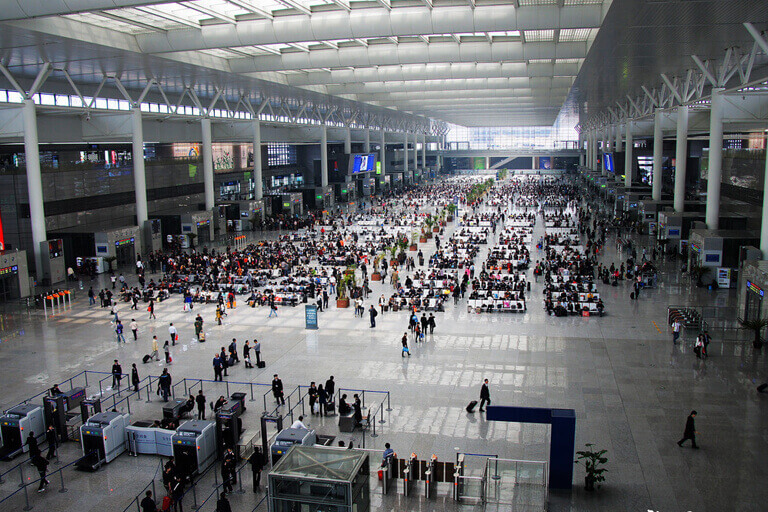 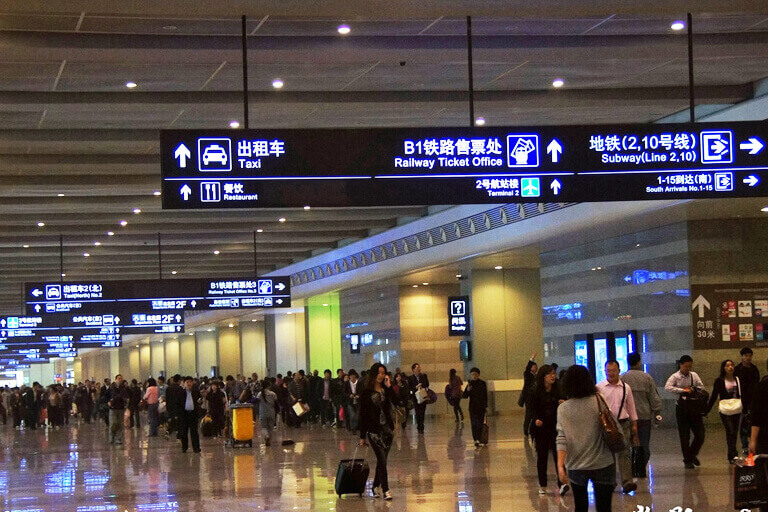 How to Get to Shanghai Hongqiao Railway Station

● By Maglev Train: From Shanghai Pudong Airport, you can take maglev train to Longyang Road firstly, and then take metro Line 2 to railway station.

● By Taxi: The driving from Pundong Airport to Shanghai Hongqiao Railway Station takes about 1 hour and 20 minutes.

By Subway: It is available to take metro Line 17 directly from Zhujiajiao to Shanghai Hongqiao Railway Station which cost only about 40 minutes. Shanghai Subway Maps >> 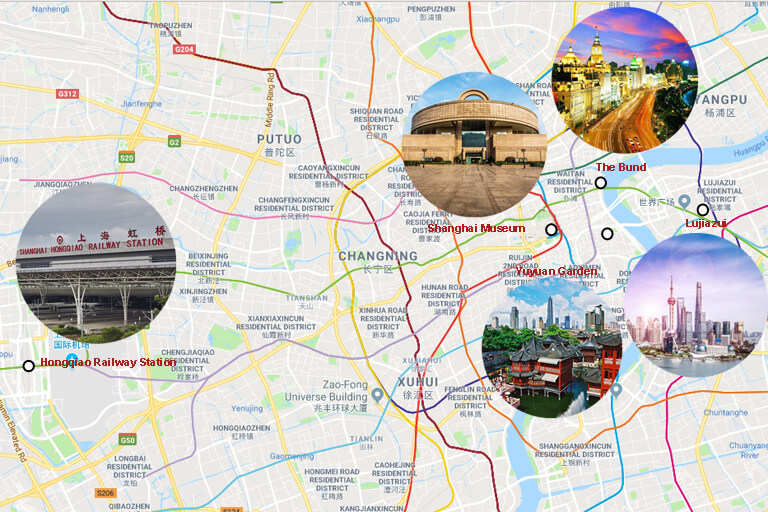 There are two squares in Shanghai Railway Station, namely North Square and South Square. From each of them, you can enter the waiting rooms. The ticket offices (equipped with booking, altering, canceling windows) are outside the entrance. After collecting your tickets, you can pass the security check and enter the railway station. There are 9 waiting rooms in the second floor Shanghai Railway Station. As you enter the station, you can see an electronic board from which you can find which waiting room for your train. Waiting Room 0 is located in the first floor. Climbing to the second floor with an escalator, you can see two lines of waiting halls on eastern sides and western sides. There are toilets and drinking fountains between two adjacent waiting rooms. The commercial areas where you can get some fast food and drinks are beside the Waiting Room 3 and Waiting Room 4. Each waiting room is equipped with enough seats and several checking gate. When it’s time to check, the broadcast will remind you in bilingual language (English and Chinese). After passing the checking gate, you can take an escalator or a barrier free elevator to the first floor to catch your train. Getting off the trains and follow the signs to exit, you will get to the southwestern exit and northeastern exit. The subway station is located in the underground floor of the South Square and the first ground of the North Square. 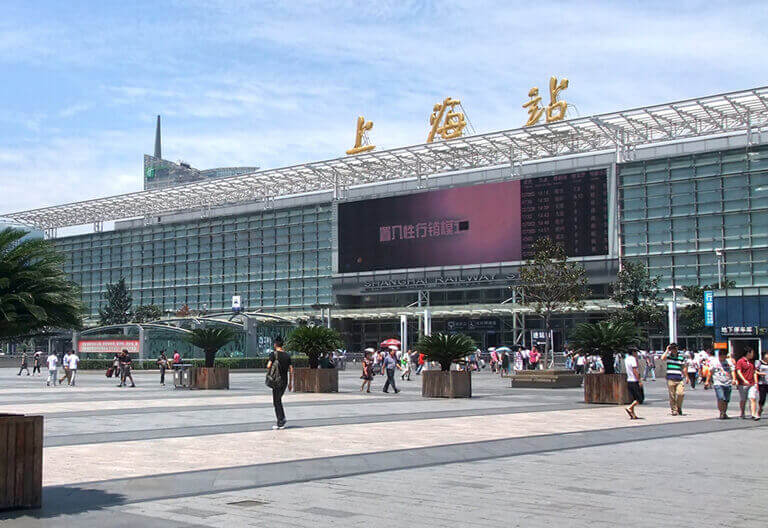 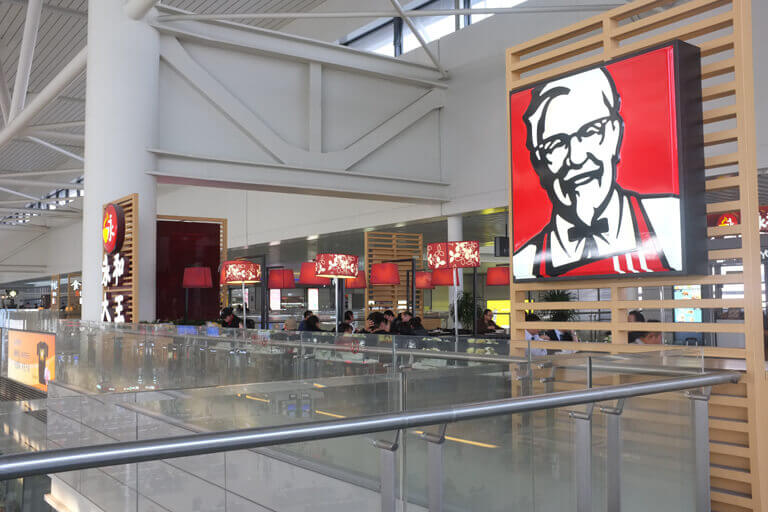 How to Get to Shanghai Railway Station

With a good location in the downtown area, Shanghai Railway Station offers convenient access to the nearby attractions.

Shanghai Railway Station is only about 3km away from Nanjing Road, and you can reach there by metro Line 1 within 15 minutes. From Nanjing Road, you can walk to the Bund to savor the beautiful architectures in Shanghai.

● By Shuttle Bus: There are frequent shuttle buses transferring between Shanghai Pudong International Airport and Shanghai Railway Station which take about 2 hour.

● By Subway: It is also available to take metro Line 2 and then transfer to metro Line 4 at People Square Station, taking about 1.5 hours.

● By Taxi: To save time, you can choose to call a taxi which needs about 1 hour regardless of traffic jam.

● By Taxi: Rather than complicated transfer, you are suggested to take a taxi directly, which takes about 1 hour.

● By Subway: Take metro Line 2 and then transfer to metro Line 4 at Zhongshan Park Station. You needn’t worry about the traffic jam and the whole trip takes about 50 minutes.

● By Bus: It cost longer time but you don’t need to transfer if you take public bus No. 941 which takes nearly 2 hours.

● By Taxi: Calling a taxi or using a private car which needs only about 50 minutes if you are lucky to miss the traffic jam. 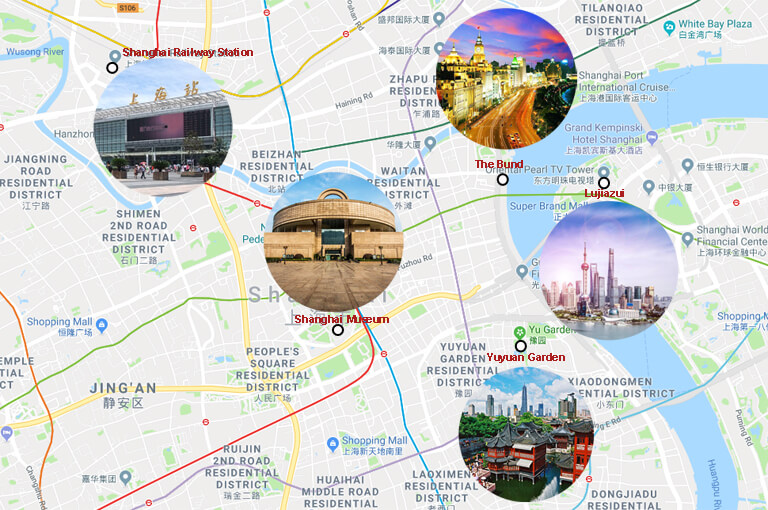 Shanghai South Railway Station is another major railway station mostly serving high speed C-trains to other towns in Shanghai and other ordinary trains to cities in southern China. It is featured with a unique design with a huge round body which looks like a UFO. There are three floors and two squares. The underground floor is arriving floor. The first floor is equipped with platforms and passages which connects the southern square and northern square. The second floor is departure floor with waiting hall which can accommodate 10,000 people.

How to Choose the Best Railway Station

Before boarding a right train, you have several steps to follow: 1) Prepare your documents well (passport, visa); 2) Get to the right trains station in advance 3) collect train tickets; 4) Read your train ticket; 5) Pass the security control; 6) Security check & luggage check; 7) Find right waiting room; 8) Cross the ticket checking gate; 9) Get to the right platform; 10) Get on your train. After you get off your train, your ticket will be check again to leave the station. Check details>

As a professional travel agency based in China, China Discovery have helped thousands of travelers obtain their great holiday in Shanghai and other popular destinations. Traveling with us, your Shanghai tour will be customized according to your own taste, interest and budget. Our local travel guide and driver will meet you at the exit of the railway station and accompany to your hotel and every attraction. 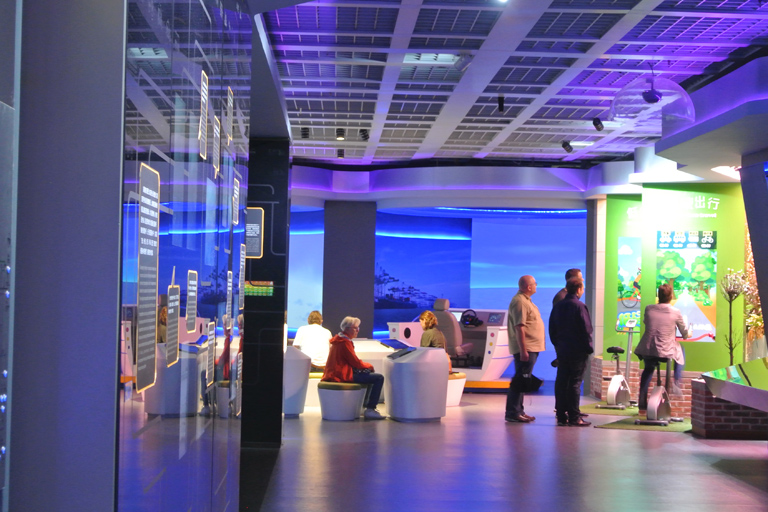 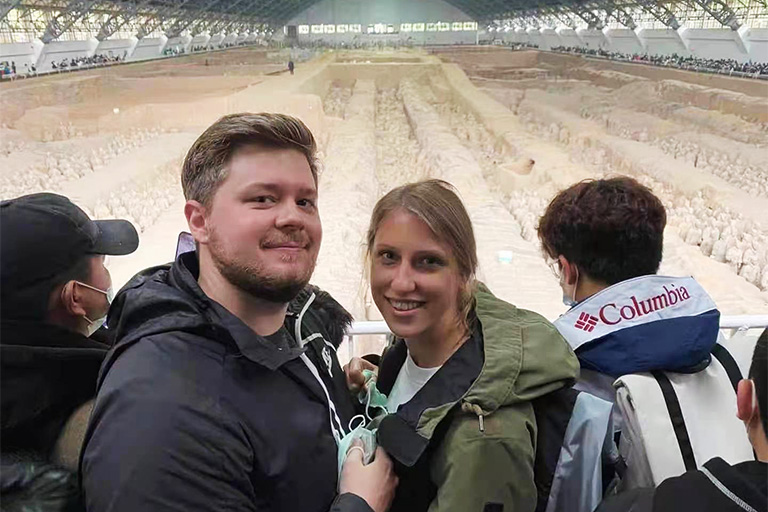 Ellen
Shanghai Hongqiao train station
If I’ve bought a ticket online where can I exchange it? Is there any parking area for scooters so I can leave it and pick it up next day?
2019-08-12 13:32
Hi Ellen,

Thanks for your question! You can exchange you e-ticket to a paper one at any railway station in Shanghai. And if you are going to exchange your ticket at Shanghai Hongqiao Railway Station, you can follow the signs to the second floor (F2), where you can get the ticket from one of those ticket offices (售票处).

In the railway station, there is no specific parking area for scooters, but only for cars. As Shanghai Hongqiao Railway Station is well-linked with Shanghai Metro Line 2, 10 and 17, you are suggested to ride the metro lines to the station.

If you are interested, you can get more information about how to collect China train tickets at:
https://www.chinadiscovery.com/china-trains/how-to-collect-china-train-tickets.html

Yes, there are high speed train runing from Suzhou to both Shanhai Train Station and Shanghai Hongqiao Train Station. Shanghai Train Station is located about 50km northwest of your destinational hotel, which needs about 1 hour driving. Shanghai Hongqiao Train Station lies about 60km away from the hotel, but with same ride time. Anyway, it takes about 1 hour to get to your hotel from any one of the two stations by taxi. If you want a worry-free Shanghai and Suzhou tour without any transfer concerns, you can select from our popular tour packages (Shanghai Tours: https://www.chinadiscovery.com/shanghai-tours.html, Suzhou Tours: https://www.chinadiscovery.com/suzhou-tours.html, Shanghai Suzhou Tours: https://www.chinadiscovery.com/shanghai-suzhou-tours.html) or contact us to customize a unique private tour in Shanghai and Suzhou.
Caroline at China Discovery 2019-03-13 12:32

Harold Vanderhart
Hongqiao airport to Suzhou
Our flight from Hong Kong is scheduled to arrive at Hongqiao airport at 3:50pm on Monday March 25th with China Eastern Airline. The two of us plan to take a bullet train from the Hongqiao train station to Suzhou. We need to allow sufficient time to collect our luggage, travel from the airport to the train station, collect our tickets and find the right place to board the right train.

If we allow 2 hours, then we would look for a 5pm train or later. Is that enough time or should we allow 3 hours and look for a 6pm or later train?

We are staying at Grand Aster Hotel at 488 Sanxiang Rd. from there we call a taxi from the Suzhou station to the hotel. Does that sound reasonable?

Thank you.
2019-03-12 05:48
Hi Harold,
Thanks for attention and trust on us. Normally, it takes at least 1 hour for international flights passengers to collect the luggage and go throught the customs clearance. If your flight is delayed, you will need more time.

Shanghai Hongqiao Train Station is located next to Hongqiao Airport, that you can conveniently transfer from Terminal 1 to the train station within 20 minutes, by subway (Line 10 with 2 stops) or by walking. Since Hongqiao Train Station is a very big and crowd rail hub in Shanghai, it would be a big pressure for you to collect tickets, pass security and luggage checks with long queues, and find the right waiting hall and ticket check gate within 30 minutes. So we strongly suggest you spare sufficient time, better get 2.5 hours or above. We checked that there are nearly 20 bullet trains running from 18:20pm to 21:42pm (the last train), so you have lots of choices.

Suzhou Train Station is located about 7km north of Grand Trustel Aster Hotel, much closer than Suzhou North Train Station. Upon arrival, you can take a taxi from the station to the hotel less than 30 minutes, or you can directly take a Rail Trainsit Line 2, get on from Suzhou Train Station and get off at Sanxiang Square Station with only 4 stops. The last metro leaves at 22:56pm.