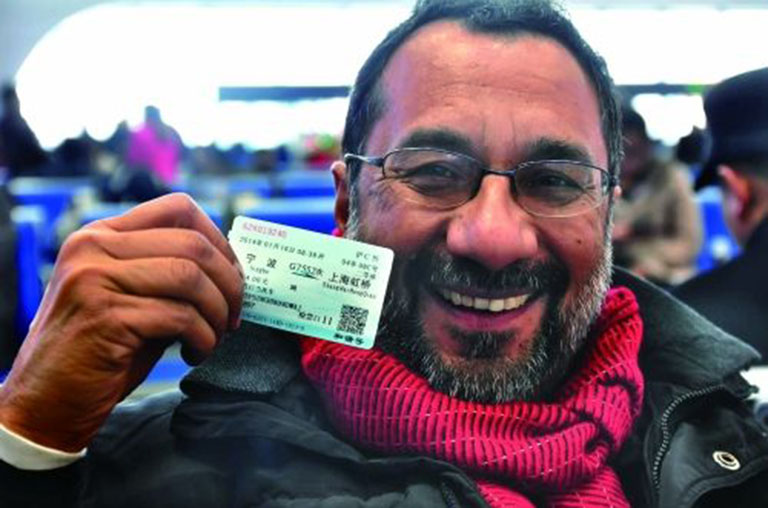 Once you get your ticket, you can find that the main information like destination is printed in Chinese and pinyin, while other important information like time is shown in number. No English available, so it might be confusing to read such a China train ticket. Do not feel trouble, you can have a totally understanding after read the below information.

Types of Tickets for China Trains

The two main types of China High Speed train tickets are printed in blue and red. The biggest difference between the two kinds of tickets except the color is that the blue magnetic ticket can be read by the automatic entry or exit gate while the red paper ticket is validated manually at the gate by a railway employee.

How to a Read China Train Ticket

To make the process of reading a China train ticket easier, take a look at the sample ticket in the image below and read about what each block means. 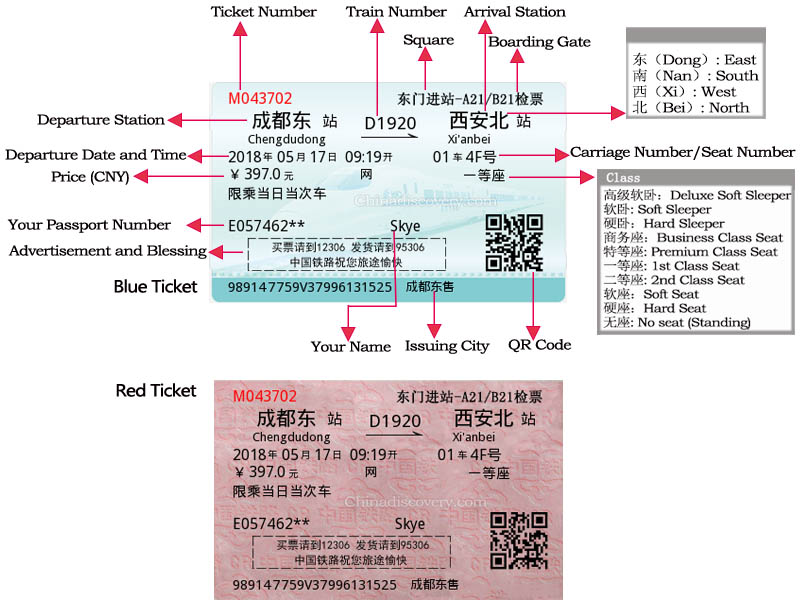 You can find your ticket number on the top left corner. The red ticket number consisted of both letters and digits are the serial number of train tickets issued from one terminal or ticket window, which don’t really matter to you.

Shown on the top right corner of your ticket, boarding gate is the exact place for you to board after get into the train station. Not every ticket has the boarding gate information (though Most of them have). If there is no gate information, you should check that at the big LED Screen as soon as you ended the security check when enter the station. 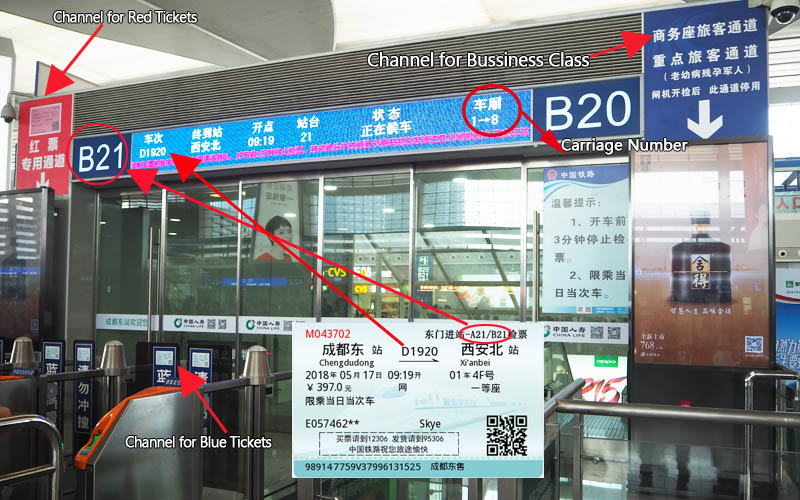 With departure station name lies on the left and arrival station name on the right, the station names are the largest characters printed in bold on the ticket. The English letters below them are their Chinese pronunciations in pinyin, which are not always spell like English words though they look definitely like. For example, Chengdu East is spelled as Chengdu Dong in pinyin, and Xi’an North is spelled as Xi’an Bei.

The ‘city name+location name’ mode is the main way to name a newly built train station, such as Beijing Nan (south in English) and Chongqing Xi (west in English), thus it will be helpful if you have learned the location name in Chinese before your trip.

Between the departure and arrival station is your train type and number which consist of one English letter prefix and up to four digits. The prefix English letter shows you the type of your train, while the following numbers tell you the exact train you will take.

G (gaotie): High Speed EMU Trains with the average speed of 300 km/h or above

Under the pinyin of departure station are the departure date and time, which is in the order of year/month/date/hour/minute. Keep in mind that the time is written in the 24-hour format and there is no arrival time printed.

Important!Note that both the departure time is ALWAYS written in China Standard Time (CST), GMT +8. This means that in order to not miss your train or to avoid any mix-up you have to check your phone or watch whether it is in China Standard Time or not. Also, it will help you a lot if you have learned below Chinese characters before your China High Speed Train trip:

Under the pinyin of arrival station are the exact number of your carriage and seat, which is in the order of carriage/seat. The Chinese character 车means carriage in English, while 号 means number. For example, 4车4F号 means Carriage 4 and Number 4F.

These are located in the fifth row, with price on the left and class on the right. The price is printed in currency Chinese Yuan (¥).

Your Personal Passport Number and Name

According to the real-name policy, the passenger's name and passport or ID number are printed on the ticket. Don not feels trouble about your privacy. Not every letter is showed on the ticket, some are replaced by asterisks （*）.

The two Chinese sentences inside the dotted line box are an advertisement and blessing. The first sentence is trying to advertise the passenger ticket booking web (12306.cn) and freight transport service web (95306.cn) of the China Railway Corporation, while the second sentence is to wish you a happy journey.

This is in the last row in Chinese characters, telling in which city the ticket was printed. To its left, is a code made up of digits and English letters. It is used to verify the authenticity of the ticket, as does the two-dimensional code in the right bottom corner.

The code is mainly used for anti-counterfeiting and boarding. Other than this, the specialized scanner of train stations can quickly read your information after scan the code, which will save you a lot of travel time.

Thanks for your question! The arrival time varies according to the city and the train station you are going to depart from. At some train stations, you may have to wait in line to get in, while at others you may not. Usually, you are suggested to leave yourself AT LEAST half an hour in the train station to collect your train tickets and find the right boarding gate.

Thanks for your question! The carriage number is shown both outside and inside the HSR train. The outside number may be above or next to the entrance door, while the inside always shown at the end of every carriage. Usually, passengers are supposed to board the train from appointed carriage. However, if you are really in hurry, you can board from the carriage next to you and then find your carriage and seat.

For more information of HSR carriage and how to Board & Disembark from the train, please visit:
https://www.chinadiscovery.com/china-high-speed-train-tours/facilities-on-speed-trains.html