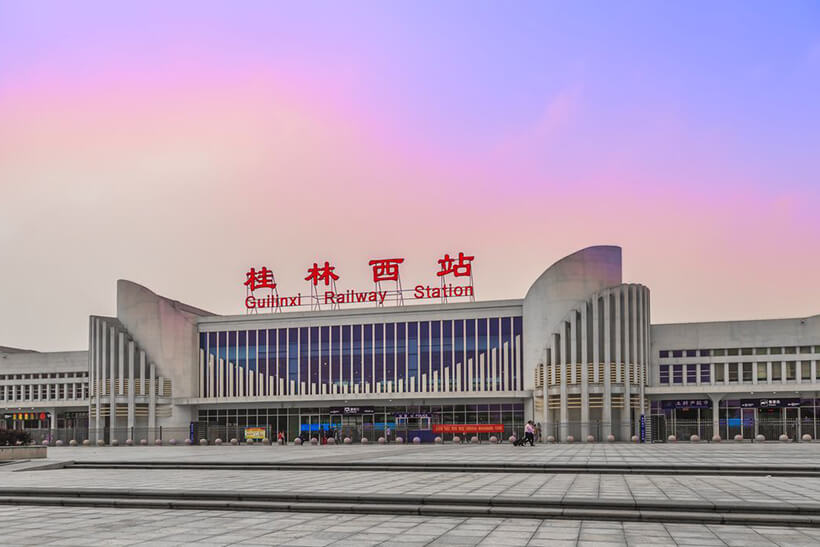 As the one of the popular tourist destinations in Southern China, Guilin has four train stations running high speed trains, including the Guilin Railway Station, Guilin North Railway Station, Guilin West Railway Station and Yangshuo Railway Station. Totally, these four train stations departs around 250 daily trains to Guangzhou, Chengdu, Chongqing, Kunming and lots of domestic major cities. The former two stations operate both G trains and D trains while the latter one only has D trains for transfer. To help you experience high speed train travel to Guilin and tour around from Guilin, we listed the detailed location, transportation and train routes guide for your trip planning of Guilin. All Trains to Guilin >> 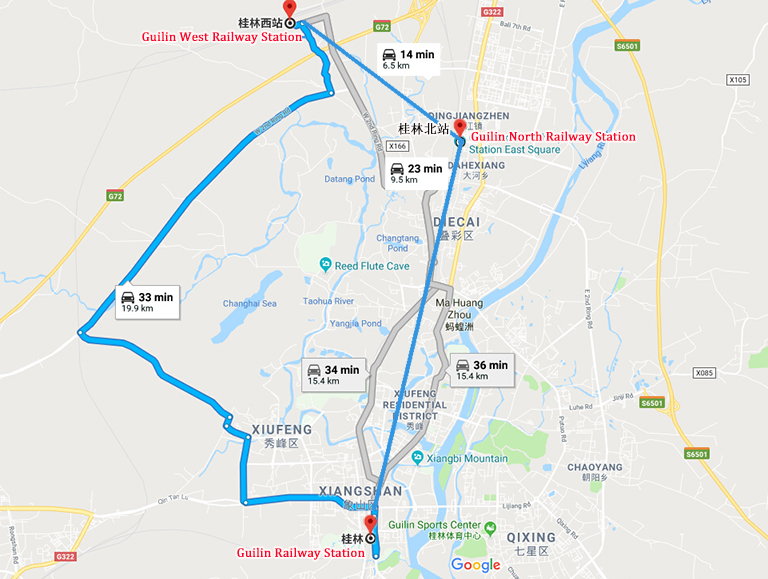 With its long history, Guilin Railway Station is a local train station, somewhat old and not big. The front area is a square for passengers’ distribution, where you can take bus, taxi to get to or leave. Please note that everyone is required to pass through security check to enter the station, to Ticket Office or Waiting Hall.

The station building is a three-storeyed rectangular architecture with a courtyard and 2 platforms. Once entering, there you can see a large entrance hall, around 220 sq m. On the left hand side is Ticket Office while the other side is a waiting room and a separating waiting area for maternal and child. A second security check is required to go inside after you buy or collect tickets.

Up to the 2nd floor, there are huge waiting rooms for group and individual passengers. While staying here, you need to pay attention to the display board and check ticket at the right gate according to signs and broadcast notification. VIP Waiting Room is in the south and there is only a small shop inside, so you’d better have meal in advance or prepare some snack before getting in.

As for the 3rd floor, it is the elevated level for office occupancy of train staff.

*Because the main station building was constructed years ago, the waiting rooms are in low-light conditions and there is usually no elevator to take, except walking stairs, maybe inconvenient for large-luggage carriers and the old and child passengers. 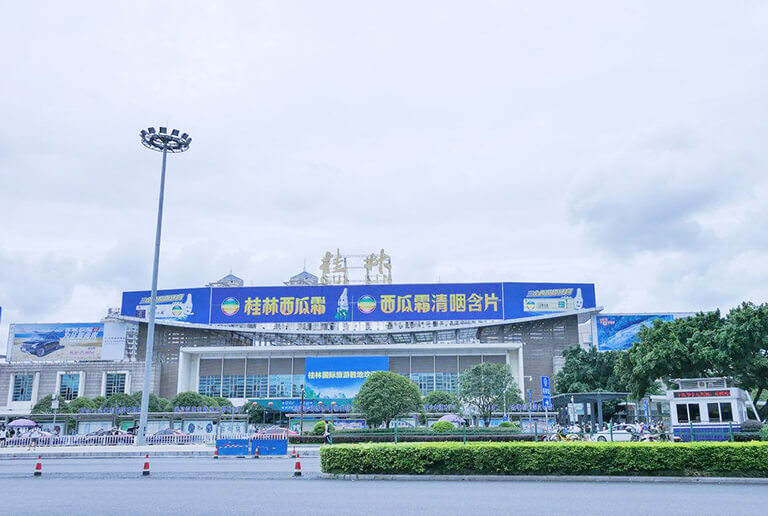 The Facade of Guilin Railway Station 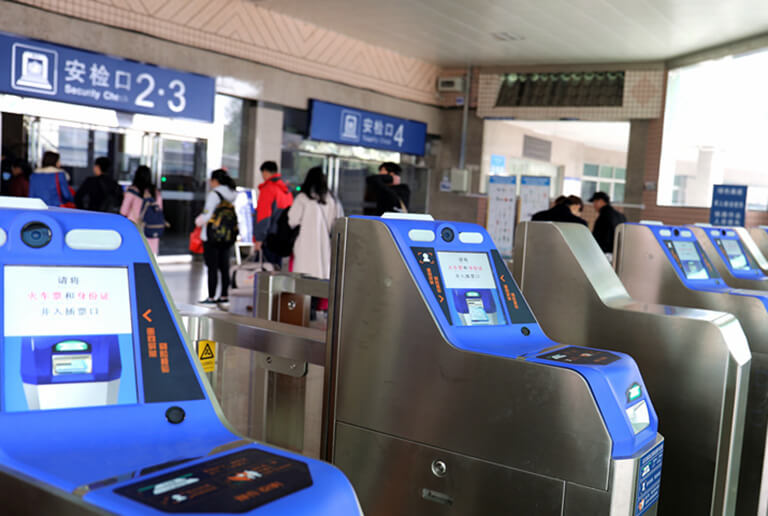 Guilin Railway Station is one of the oldest train stations used in Guilin, just a bus stop close (330m) to Guilin Bus Terminal. Speaking of transportation, the stations is thought to be the train station of the most convenient traffic in Guilin, for its perfect connection with all city areas via bus and taxi. The best part is that you can get direct bus to Guilin North Railway Station or downtown from here.

Guilin Liangjiang International Airport (桂林两江国际机场, IATA: KWL) is located in Lingui District, west suburb Guilin, about 28km of downtown and 28km to Guilin Railway Station. So far there is no airport bus shunts between the airport and Guilin Railway Station directly, so the most convenient and fastest way is taking a taxi for about 40mins’ ride.

Guilin Railway Station is located in upper stream and west bank of Li River, very close to the downtown area. To begin your Guilin travel with enough pre-work, you can read the following transportation guide to find a time-saving way.

If you are going to take a cruise of Li River to experience the essence of beauty and enjoy in a leisure way, you need to get to the Zhujiang Pier or Mopanshan Pier first. The two piers in southeast Guilin are quite close but serve with two different kinds of cruise boats.

● To Elephant Trunk Hill (Xiangbi Mountain): about 10mins’ driving by taxi or half an hour walking 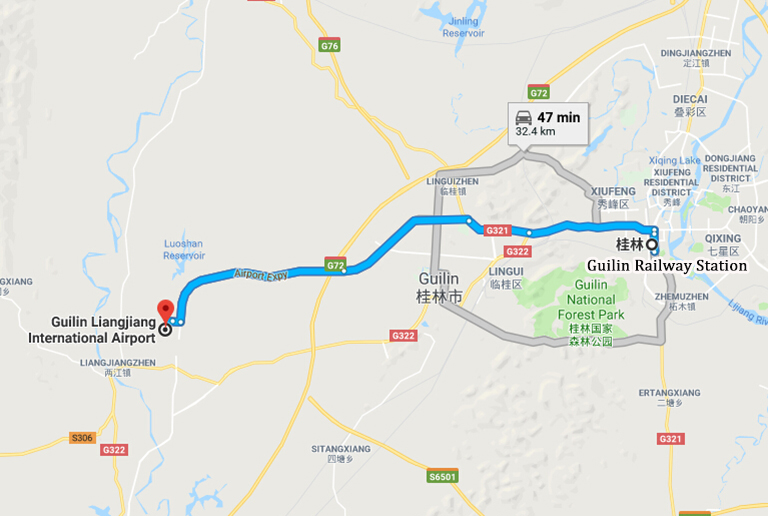 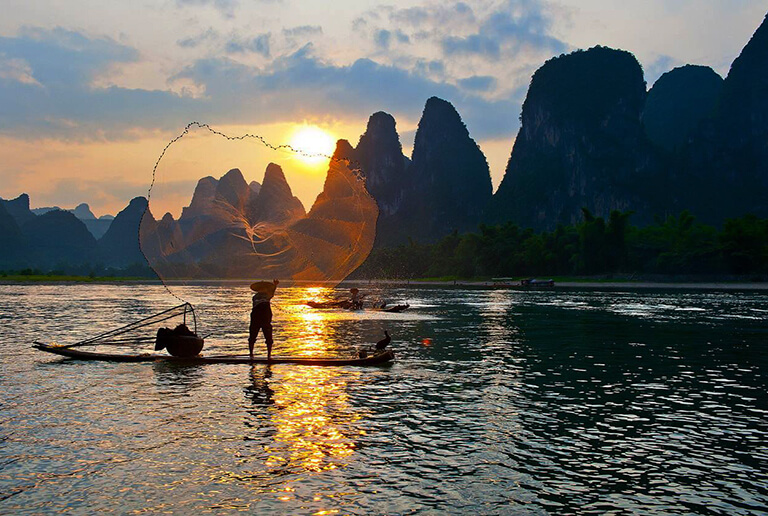 Since Guilin is a major tourist destination in China, lots of high speed trains (G & D trains) starts from or passes by Guilin Railway Station to more domestic cities and surrounding areas in Guangxi Zhuang Autonomous Region, such as trains from Guilin to Beijing, Shanghai, Guangzhou, Shenzhen, Hangzhou, Chengdu, Kunming, Changsha and to Nanning and so on. Check more railway links of Guilin to plan your China high speed train travel. 6 Days Best Hong Kong Guilin Tour with Guangzhou Layover >>

Guilin North Railway Station experienced several reconstruction and expansion, and even in the future it will be extended to a larger size with an additional station building. After the latest renewal, the east station building that is being used covers about 100,000 sq m with 4 waiting rooms (2 on 1st floor & 2 on 2nd floor) 9 platforms, 18 tracks and 39 elevators.

The square in front of the station building has a capacity of over 400 parking spaces. You can take public bus next to the parking lot and get supply from the Carrefour Supermarket, small shops and restaurants nearby

To buy or collect ticket from Ticket Office, you have to pass through security check first with your luggage. And the ticket office is 600 sq m large with 12 counters, and there are 9 automatic ticket machines and 6 ticket pick-up machines on one side. After walking in, you can see a LED display screen showing the train number and exact waiting room and an information desk you can ask for help.

Then you can take elevator to wait in the 2nd floor. After you check ticket, you will walk a bridge, and go to the platform by elevator or stairs. Passengers holding business class of ticket can have a good rest in the Business Waiting Room. Please go to the right checking gate up to the color of your ticket, red or blue.

*Free WIFI is available in the station hall. 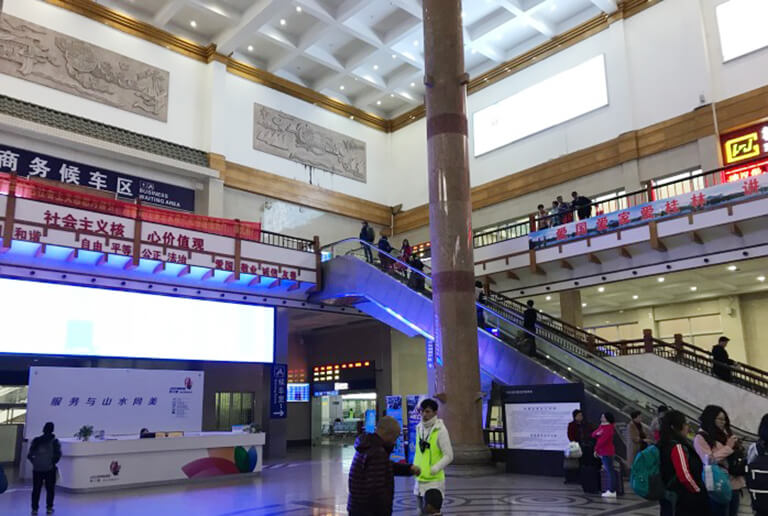 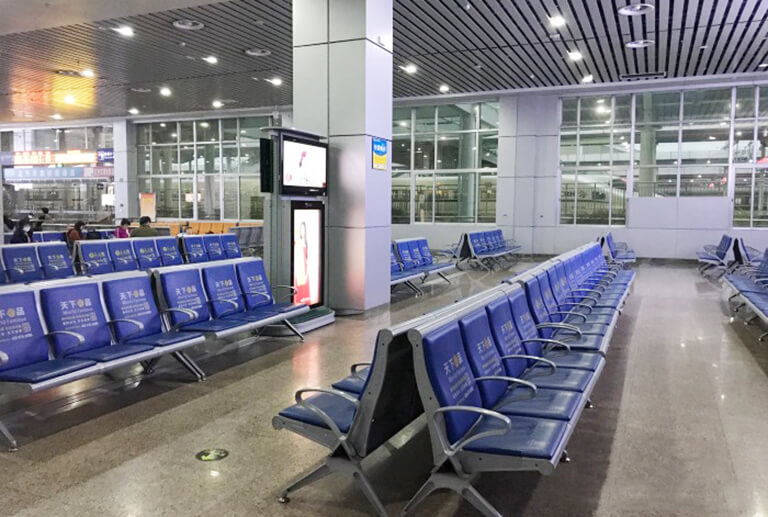 Get to Guilin North Railway Station - Location and Transportation 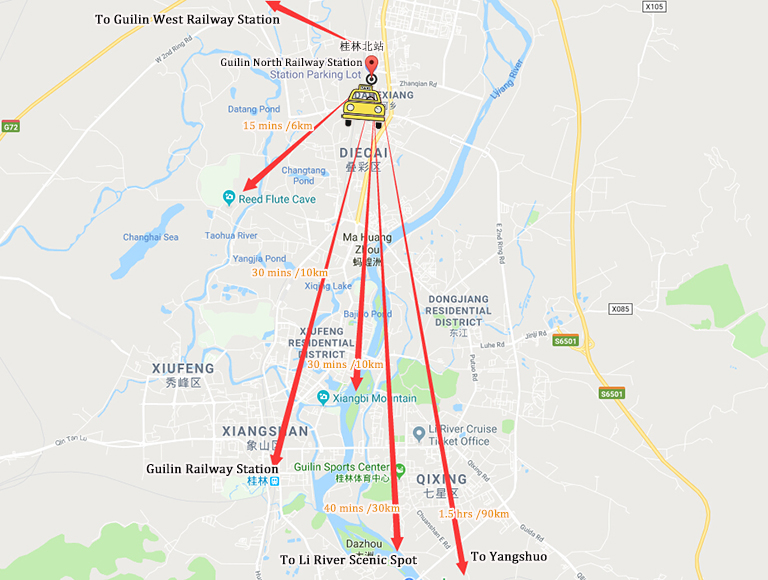 Working as an assistant high speed train station, Guilin West Railway Station is the smallest train station in Guilin, about 15km to downtown Guilin, 35km to Li River Cruise (Piers) and 1.5 hours' driving to Yangshuo. The station is a major transfer point that handles 60 D trains for passengers and cargo transport of Guiyang Guangzhou Railway and Sanjiang-Guangzhou Rail Line.

Officially put into use in 2016. Guilin West Railway Station is an intermediate station where trains of Guiyang Guangzhou high speed trains pass by. The two-floor station covers a total area of 4984 sq m with 4 platforms.

Ticket Office is in the right hand of the first floor (93 sq m), offering ticket service with one counter and 4 automatic ticket machines. The other side is exit for passengers.

There is only one Ticket Check Gate in Guilin West Railway Station, therefore passengers need to queue up long for checking and boarding. Please remember to get to the station earlier according to your schedule.

*Passengers should better prepare some snacks or have meals in advance, because there are no restaurants near the station but one small shop inside. 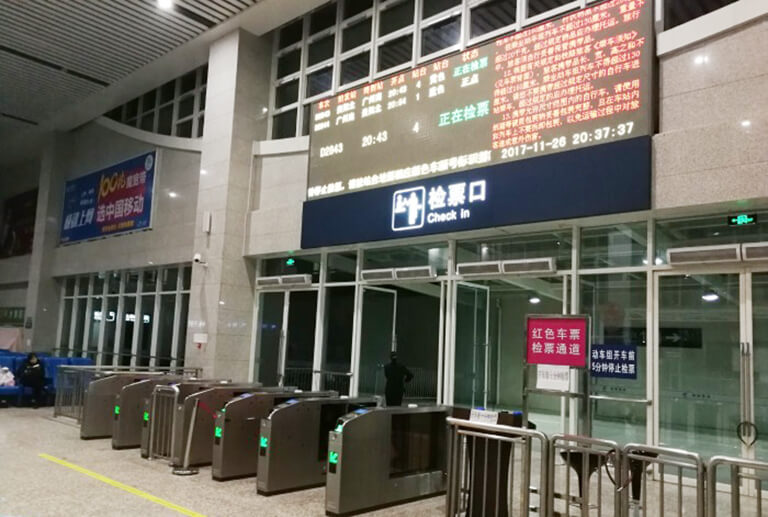 Get to Guilin West Railway Station - Location and Transportation

Guilin West Railway Station is located in north suburb of Guilin, about 11.8km to the downtown, only connected with two public buses. If you will arrive at Guilin at this station or take trains from here, it’s highly suggested to take a taxi. Local buses are not recommended, because you will wait for a long time and it can be overcrowded if you take lots of luggage. 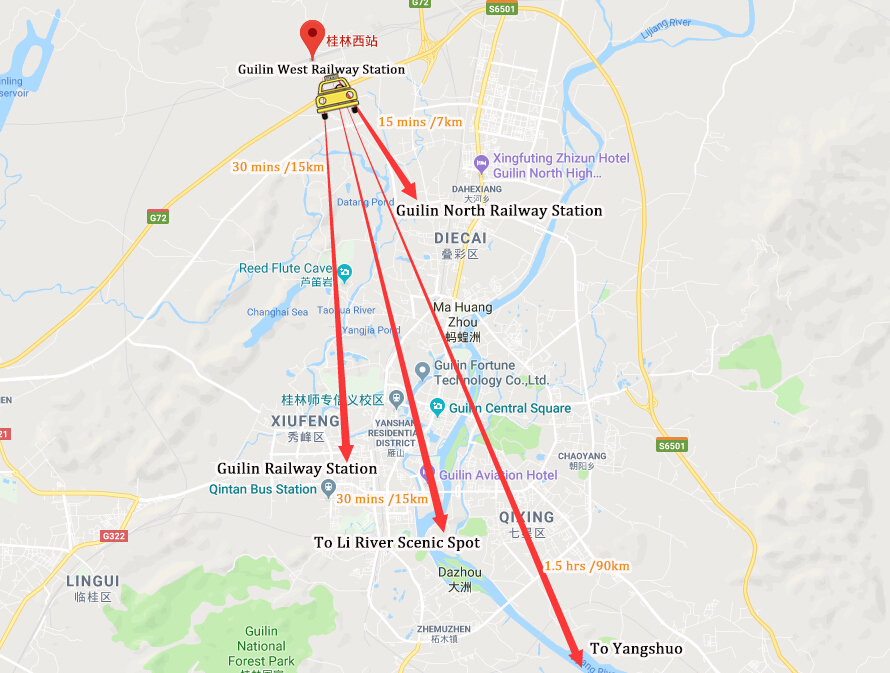 Among all the four high speed train stations in Guilin, Guilin Railway Station, Guilin North Railway Station and Guilin West Railway Station are the major three frequently used stations to/leave Guilin. Located nearest to downtown and Li River, Guilin Railway Station is the most recommended station for arrival. And there are daily high speed bullet trains running from Beijing, Shanghai, Guangzhou, Shenzhen, Guiyang, Chengdu, Kunming, Wuhan, Nanning, Hangzhou and other cities to the station. The other two stations also have passing-by trains to Guangzhou, Guiyang, Chengdu and cities in south China. If you get off at Guilin West Railway Station, located in north suburb Guilin, the transportation to downtown, attractions maybe a little inconvenient than other two stations. 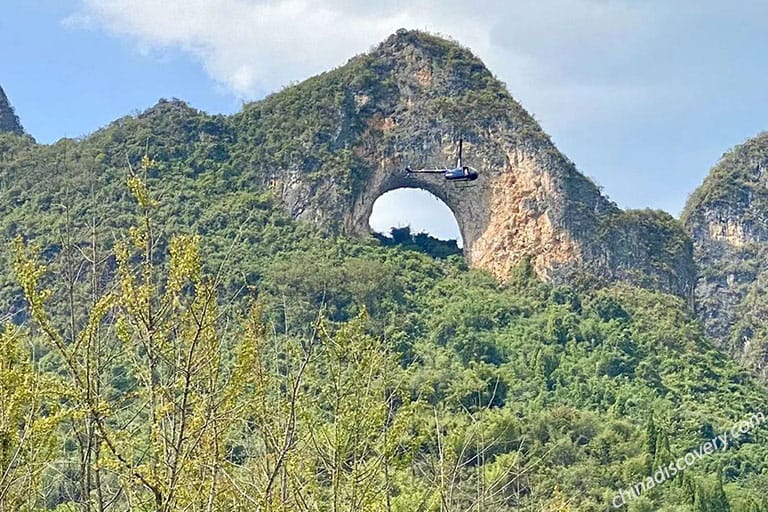