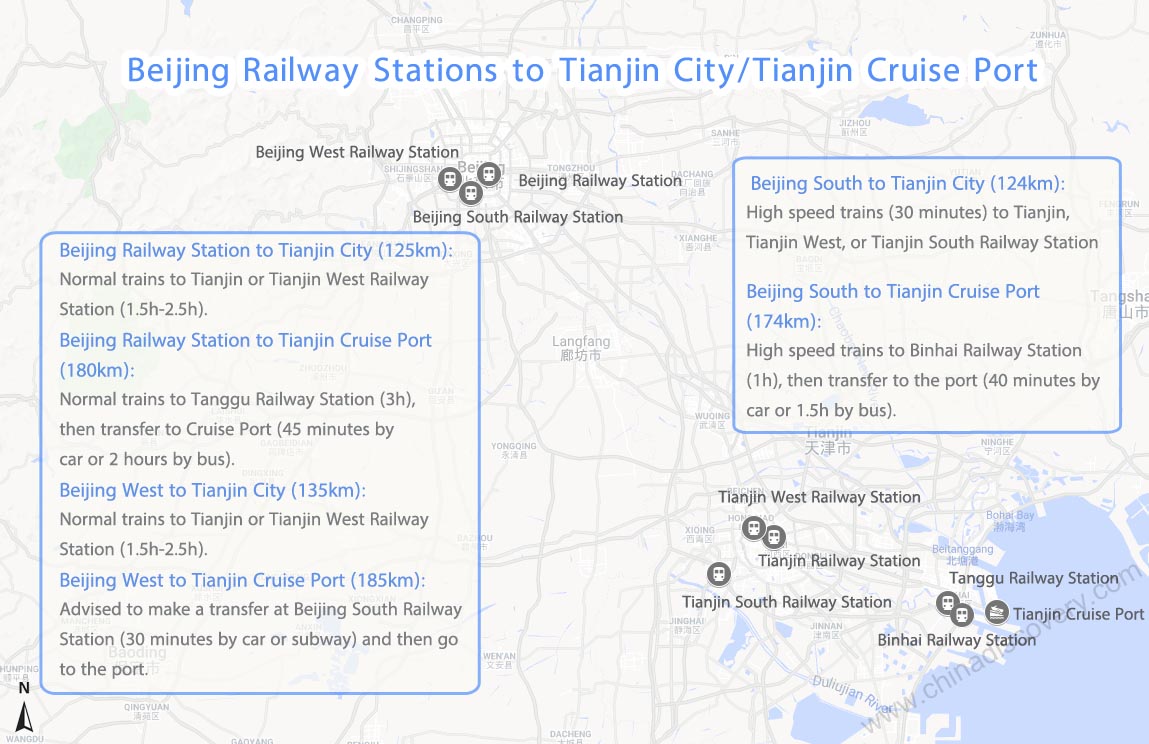 Among all the railway stations in Beijing, Beijing South Railway Station is the most convenient one to get to Tianjin and Tianjin Port because of the frequent high speed trains.

The fastest way is to take high speed trains to Binhai Railway Station (1h), and then transfer to Tianjin Cruise Port. There are about 25 high speed trains traveling from Beijing South to Binhai Railway Station every day. The earliest one departs at around 06:00am and the latest one is around 21:30pm. When you get to Binhai, you can take a taxi there, which will cost around CNY 80 and 40 minutes, or take the direct bus No. 513, which will need 1.5 hours.

Another way is to take high speed trains to Tianjin Railway Station first, then take light rail line 9 to Civil Square Station (市民广场站) and transfer to bus No. 513 to the port. In this way, apart from the 30 minutes on the train, you will need another 2.5 hours to get to your destination. You can also choose to take a taxi directly from Tianjin railway station to the port. It will need about 1.5 hours and CNY 200. 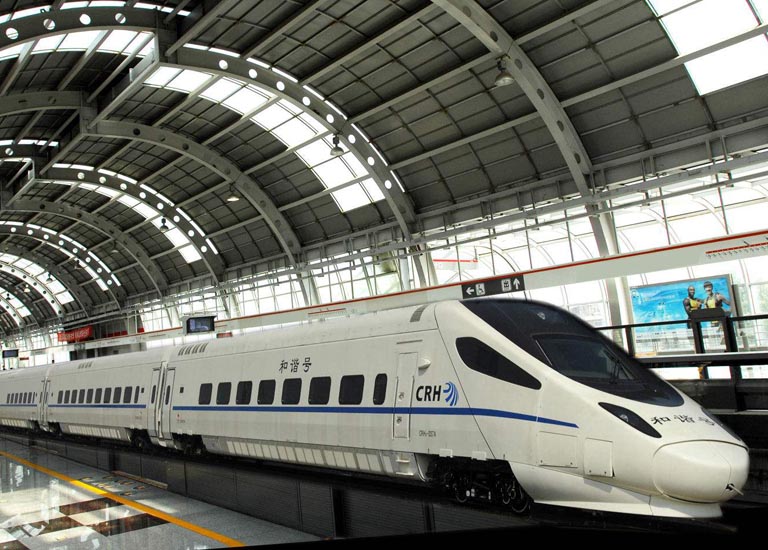 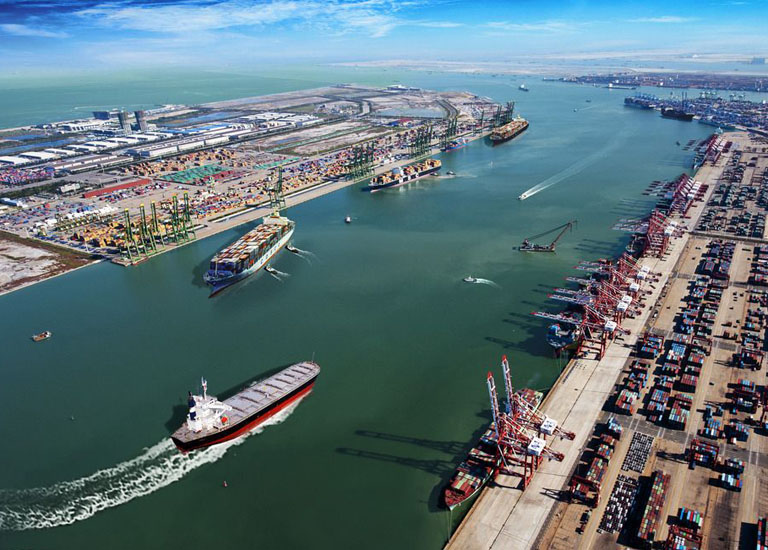 About 25 normal trains depart from Beijing Railway Station to Tianjin or Tianjin West Railway Station nearly all day round from 00:17am to 23:49pm. As they are all normal trains, the duration will be slightly longer, which ranges from 1h16m to 2.5h. The ticket price is from CNY 18.5 – 241.5. If you prefer taking the high speed train, it is also very convenient to get to Beijing South Railway Station (30 minutes by car or subway).

Getting tired of all the transfer and looking for a worry-free trip? Why not try travel with China Discovery? Our professional tour guide and driver will pick you up at your hotel and escort you to your next destination (tourist attraction, train station, etc.) on a comfortable private car. All the problems such as ticket buying, meal, accommodation, transportation will be well taken care of. All you need to do is just fully enjoying your trip! >>Contact us now! 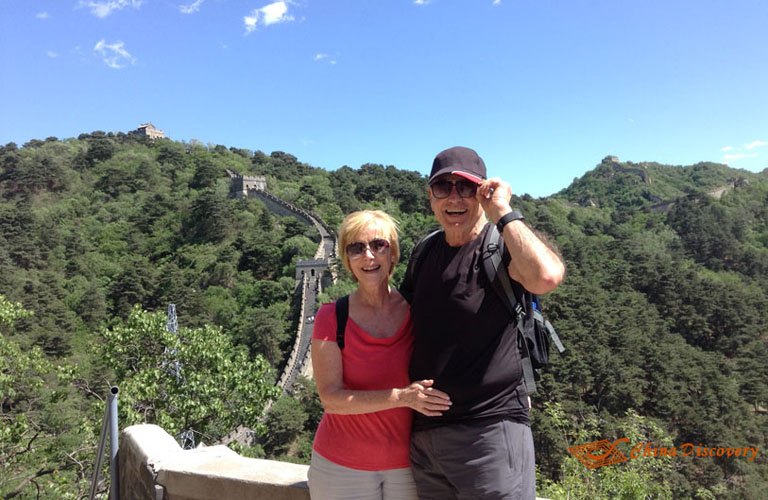 How to Plan a Beijing Tianjin Tour

As the capital of China, Beijing has so much to offer. You can spend 2 to 4 days visiting the Forbidden City to witness the royal buildings of the ancient China empire, hiking on the incredible Great Wall to feel the grandeur of this man-made wonder, and wandering along the traditional Beijing hutongs to experience the authentic local life... When you arrive in Tianjin, 2 or 3 days are usually enough to cover its major highlights such as North Jiefang Road Financial Street (the “Wall Street in the East”), Five Great Avenues (Wudadao Area), Jingyuan Garden (former residence of the Last Emperor of Qing Dynasty – Puyi), and Porcelain House (China House).

If you have other ideas or questions about a Beijing Tianjin Tour, please feel free to contact us. We are also specialized in tailor-made tours that fit you best according to your own interests, requirements, traveling time, etc. 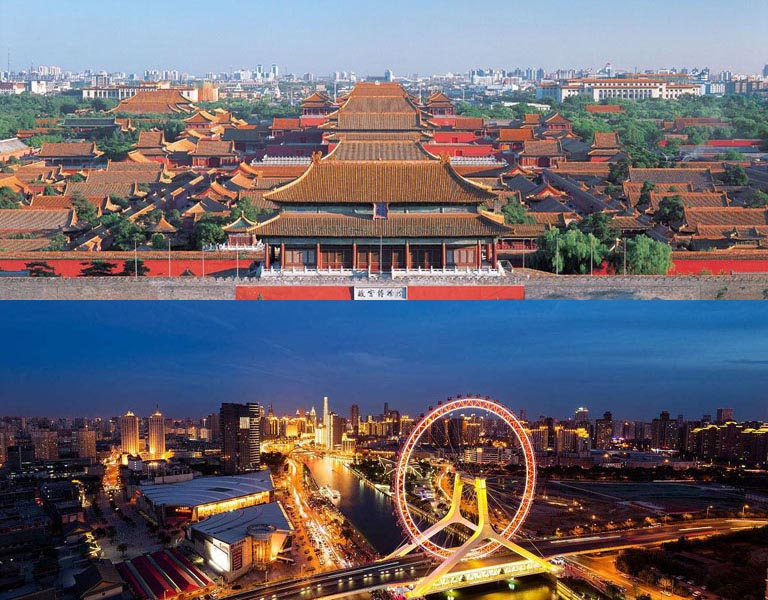