As a coastal city, Tianjin has two gateways, namely Tianjin Port (Xingang Port) and Binhai International Airport. If you get to China by water at Tianjin and expect to explore this amazing country, you can always transfer here to the train stations of Tianjin and take a high speed bullet train to the nearby cities such as Beijing, which is reachable within 0.5h. If you would like to explore the further cities such as Shanghai, Xian, Guilin, besides taking a train, you can also transfer to the Airport in Tianjin and get to most of the other cities in China by air within about 2 hours.

Meanwhile, passengers landed in Tianjin Airport can head to Tianjin Port (Tianjin Cruise Port) where you can depart from China and sail for the other Asian countries such as Korea and Japan, etc.

The followings are detailed information on how to get from the Port to Tianjin Airport and the transferring ways to the opposite direction. 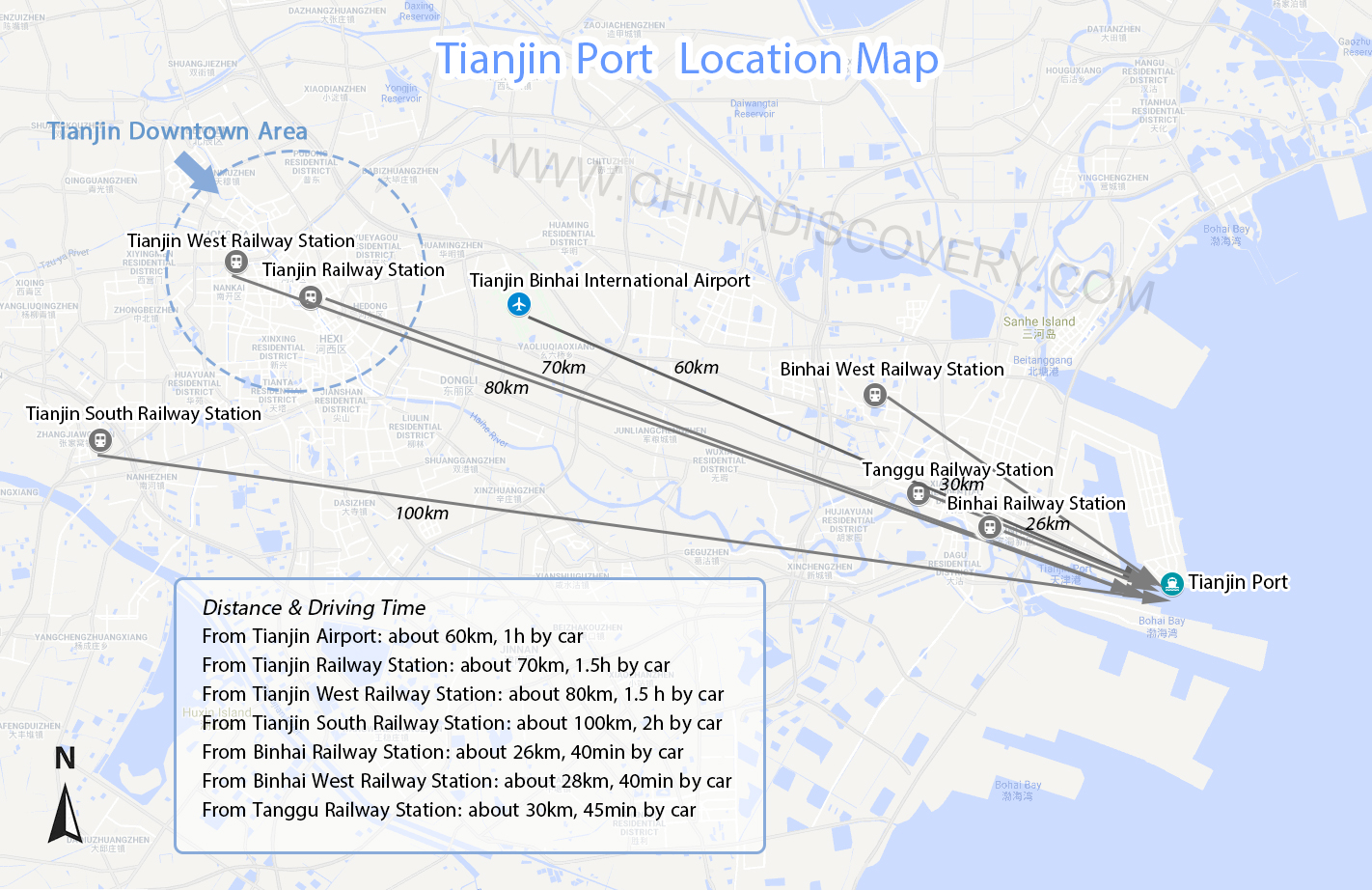 Tianjin International Cruise Home Port (Tianjin Port or Tianjin Cruise Port for short) is about 70km away from downtown, located in the east of Binhai New District, close to the Binhai Railway Station, facing the Bohai Sea.

Where is Tianjin Airport

Tianjin port is linked by Bus 513 to the Subway line 9 at Citizen Square Station (市民广场) to downtown. However, the bus only serves from 6:00am to 6:00pm and the subway runs between 6:00am to 10:30pm. Out of this serving time, you may need to take a taxi to get from one to the other. The distance is about 60km. it takes about 1 hour by car and costs around CNY 200. Due to the long distance, the actual price might be higher and sometimes you may need to negotiate with the taxi driver. You can choose the private car service provided by China Discovery. We will pick you up from your hotel and send you to the great wall safely with comfortable vehicles, skilled drivers, and professional guides. >>Contact us now

Besides taking a taxi or booking a private car from us (about one hour by car), you can also choose to reach the port by subway and bus.

Get on the subway line 2 from the airport to Tianjin station (天津站) and then transfer to subway line 9 to Citizen Square station (市民广场). After getting out of the subway station from Exit A, you may need walk about 400 meters passing by a gas station along Xincheng West Road (新城西路) and the 513 bus station is right next to the west gate of citizen square. Take Bus 513 there and the last stop, namely Dongjiang Cruise Home Port (东疆邮轮母港 Pinyin: dōng jiāng yóu lún mǔ gǎng) is where you should get off. The duration will be about 3 hours. 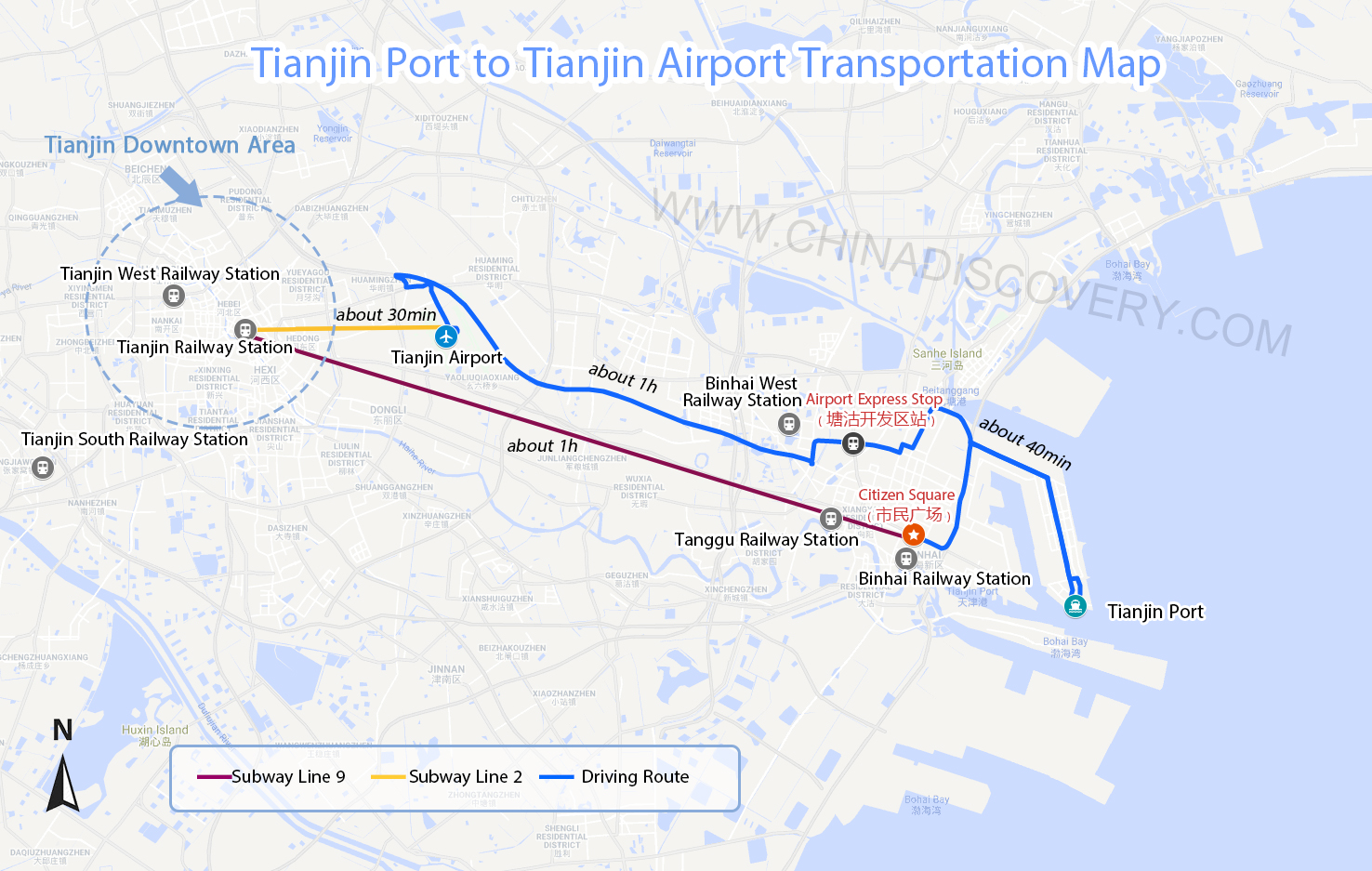 You can follow the same route, taking bus 513 to the citizen square and transfer to subway line 9 and later subway line 2 to the airport. Also, if you can get a taxi to Tanggu Kaifaqu Station (塘沽发区站), there is an airport express station, located at the crossing of Huanghai Road (黄海路) and the First Avenue (第一大街). Tanggu Kaifaqu Station is about 25km away from the Port, 0.5h by car. The airport express departs every 30min from 5:30am to 7:30pm and it takes about 1 hour from the Tanggu Kaifaqu Station to Tianjin Airport. You can also transfer with the same transferring route to the opposite direction, from Tianjin Airport to Tianjin Port (Tianjin Cruise Port).