Ningbo (宁波), situated in the eastern part of Zhejiang province(浙江省), is a national famous historic and cultural city as well as one of the three economic centers in Zhejiang. It will show you the very modern and prosperous scene that is due to the important status as a major harbor city in China, the long history of more than 7000 years since the Hemudu Culture (河姆渡文化) which demonstrates the truth that Chinese people have planted the rice by themselves from the ancient time, rich culture of Buddhism which can be felt in the famous temples, the various types of buildings of foreign styles that tell the colonial story of this city, multiple charming natural attractions, and so on. Besides, the tasteful snacks in Ningbo make visitors marvel at this harbor city with water town charm.

To discover the natural, historic and cultural beauty of Ningbo, you can go to a series of famous attractions. See them below for details! 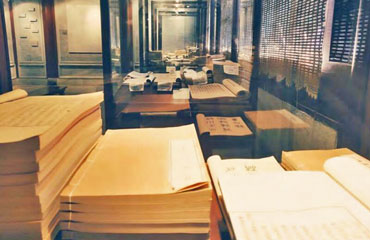 Tianyi Pavilion (天一阁) built during 1560s in downtown Ningbo is the oldest library in Asia, one of the three world earliest family libraries and the now existing earliest private library in China. More than 300 thousand ancient books of diverse fields gives visitors a good chance to feel the profound culture and long history of Chinese nation. 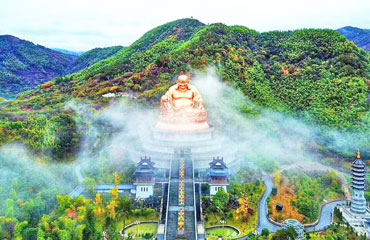 Xikou (溪口) Scenic Area has long been regarded as the “Abode of Immortals on the Sea”, where appealing natural beauty of ravine, streams, waterfalls, pavilions, etc. are available in Xuedou Mountain that is one of the five famous Buddhist mountains in China. Also, you can get close to see the hometown of Jiang Jieshi and imagine life of this famous family. 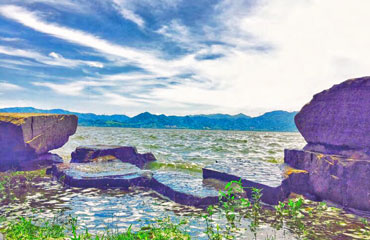 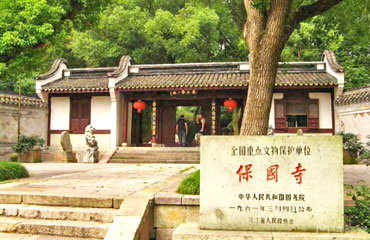 Baoguo Temple (保国寺) was first built in East Han (25-220 AD) and is famous for its well-preserved timber architecture that is one of the most ancient ones at the south of Yangtze River. Moreover, typical and fancy historic buildings of Han, Tang, Song, Ming, Qing, Republic of China, etc. gather here to exhibit the constructions in China. 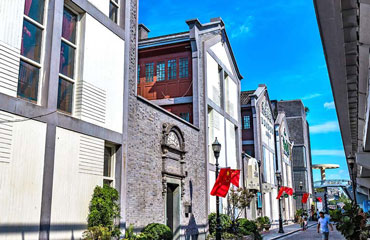 Ningbo Old Bund (老外滩) in the downtown is even 20 years older than the Bund in Shanghai. A series of buildings of western styles were gradually set up after the Opium War, so you can appreciate the beautiful historic buildings with Chinese and Western features and spend leisure time in the bars and restaurants. 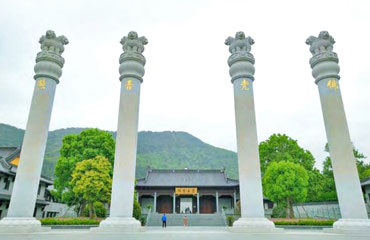 Asoka Temple (阿育王寺) is over 1700 years old and reputed as the “Buddhist land in Southeast China”. This temple is famous for its precious Sarira of Skyamuni worshipped in, delicate dagoba, and a lot of cultural relics. Besides, it is China’s only temple named after the Indian King Asoka.

As a famous cultural city for many years in China, Ningbo offers many interesting activities for you to have fun. Let’s start to play high!

Riding a bike to tour the Dongqian Lake is super relaxing and pleasing. Around the lake, you can admire the terrific natural scenery of rich kinds from day to night and do not have to worry about too many visitors in the tourist area. Tricycles for rent and bikeway around the lake are very professional.

Ningbo as a famous harbor city has its special charm, especially at night. Wander in this city, especially the Sanjiangkou (三江口) part, at night when all the colorful lights shining prosperously and the reflections on the running water, you can feel that time has ceased and life is really good!

Ningbo has a lot of delicious food for you foodies. You can try the Ningbo stuffed lard and sesame rice dumplings, steamed pork with rice flour in lotus leaves, etc. to be pleased by the Ningbo food. If you want to try the snacks, the City God Temple is a good place to go. Also, you can enjoy the seafood to get more Ningbo flavor! 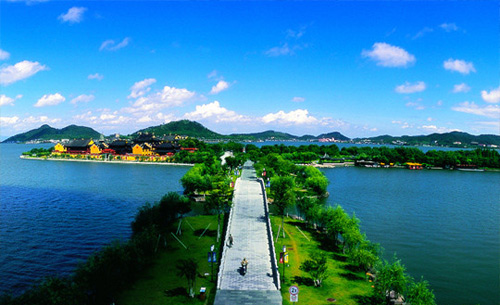 Ningbo belongs to the subtropical monsoon climate area, enjoying moist and warm weather with four distinct seasons, which provides diverse enjoyment for visitors to Ningbo. It has an average annual temperature of 16.4℃，average temperature of over 22℃ in summer, 0-10℃ in winter, and 10-22℃ in spring and autumn. Usually, the spring begins in the late March, summer in June, autumn in late September, and winter in late November. The average annual rainfall of Ningbo is about 1480 mm, among which it covers about 60% from May to September.

The best seasons to visit Ningbo are spring and autumn, when the temperature is warm and the UV is not so strong. However, it is recommended to take your rain gears if you visit Ningbo during May and September, and sunglasses as well as sun cream in summer. 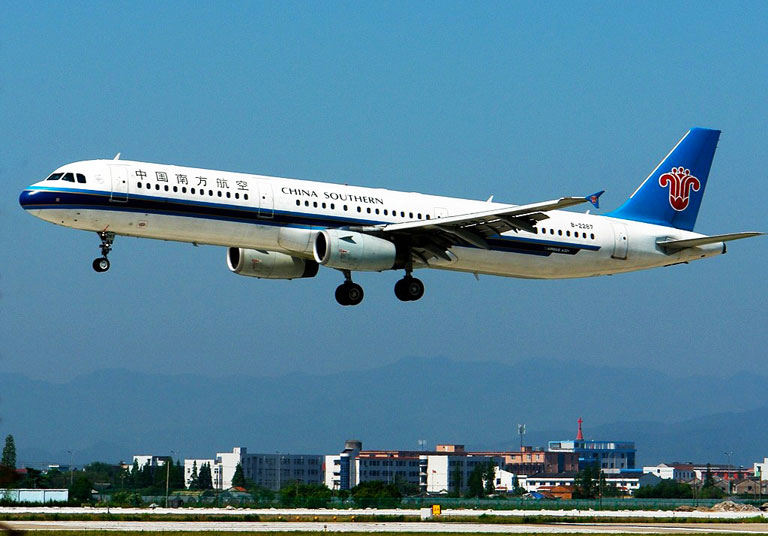 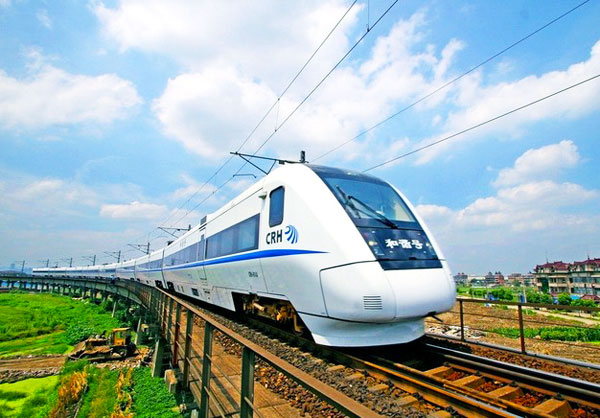 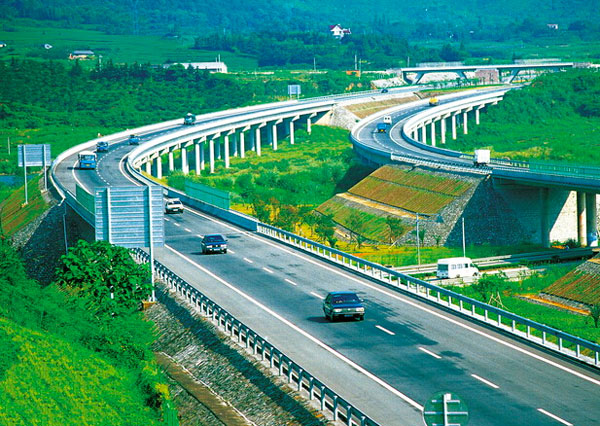 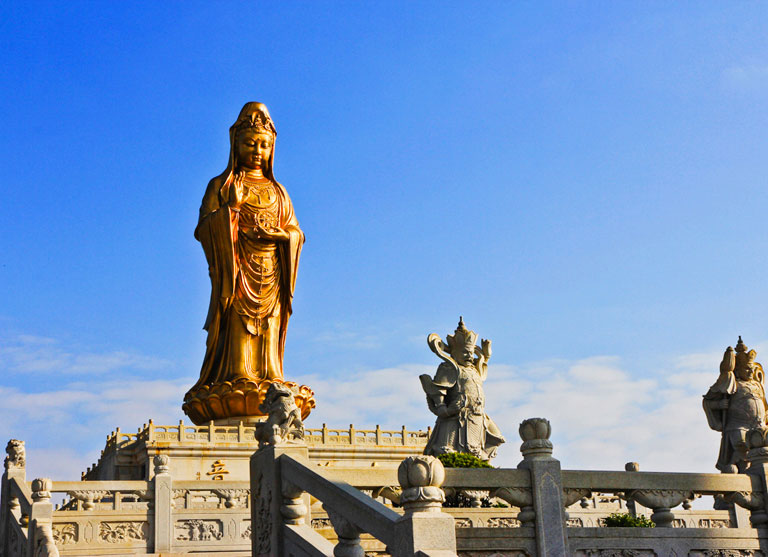 Ningbo Lishe International Airport (宁波栎社国际机场) about 14 km from the downtown is the only airport in this city, which has many daily flights between Beijing, Shanghai, Xian, Guangzhou, Chengdu, Kunming, Zhengzhou, Changsha, Chongqing, Shenzhen, etc. Also, international flights from Hong Kong, Macao, Taiwan, Singapore, Jeju Island, Osaka, etc. are available for you to get to Ningbo.

Besides, you can first take a flight to Hangzhou Xiaoshan International Airport (杭州萧山国际机场) in Hangzhou city, about 130 km away, and transfer to Ningbo by other vehicles.

You can take a bullet train from Beijing, Shanghai, Xian, Hangzhou, Guiyang, Chongqing, Nanjing, Zhengzhou, Xiamen, Fuzhou, Nanchang, Tianjin, Shenzhen, Wenzhou, Wuhan, etc. to get to Ningbo. Besides, fast trains from Chengdu, Guangzhou and other cities to Ningbo are also available.

Ningbo Railway Station (宁波站) usually for bullet train is located at the downtown area and you can transfer to your hotel or attractions by the Subway Line 2 without effort.

Ningbo Passenger Transportation Center (宁波客运中心) at the downtown is linked with other places in this city by the Subway Line 2, where many long distance coaches run to Shanghai, Hangzhou, Yiwu, Shaoxing, Yangzhou, Suzhou, Nanjing, Huangshan, Mount Jiuhua, Wuxi, and other cities, so you after your Ningbo tour, you can take a coach to the next nearby destination to continue the exploration of China’s beautiful sightseeing.

Bus, subway, taxies, and other city vehicles are very convenient to take you to where you want to go here in Ningbo.

Take the airport coach to Zhoushan and transfer to Mount Putuo by speedboat, which needs about 4 hours.

You can buy a joint ticket of coach and speedboat in Ningbo North Bus Station or Ningbo South bus Station, take a coach to Beilundaxie Island in Ningbo for about 1 hour and take a speedboat to Mount Putuo for about 70 min.

Besides, you can take a coach to shenjiamen in Zhoushan city and transfer to Mount Putuo by a speedboat from Banshengtong Dock in Shenjiamen, which takes about 3 hours. 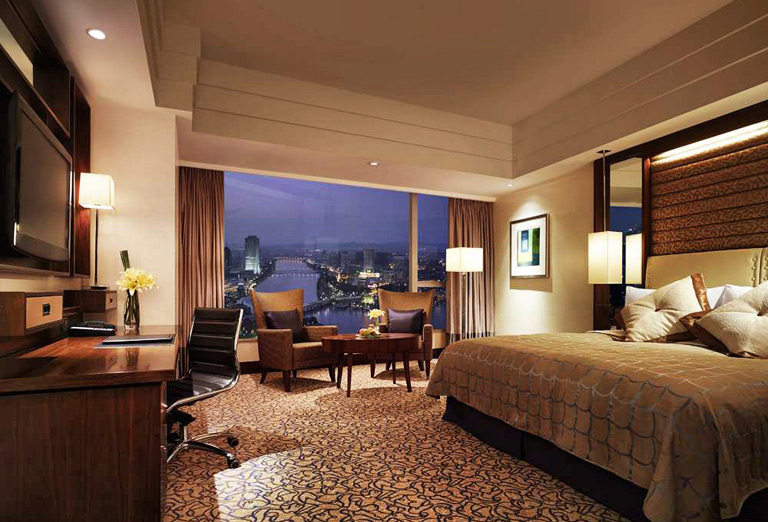 Ningbo has a great number of hotels and hostels of different standards for you to stay. You can accommodate at a luxury 5-star hotel, like Shangri-La Hotel Ningbo, Howard Johnson Plaza Ningbo, Sheraton Ningbo Hotel, Crowne Plaza City Center Ningbo, Ningbo Marriott Hotel, New Century Grand Hotel Ningbo, Sofitel Wanda Ningbo Hotel, and so forth to get the super good service and environment. Comfort hotels like Zhe Hai Grand Hotel, Ningbo Haiju Lijing Hotel, and so forth provide very cozy rooms and hospitable services. Besides, economy hotels and hostels near the attractions, subway stations, railway stations, etc. are very easy to be found and offer good services, clean rooms, tasteful food, free Wi-Fi, hot water, and so on.

Here we list some very useful maps about Ningbo City for your reference. You can feel free to use them when you want to know the attractions, location.

Location Map of Ningbo in Zhejiang 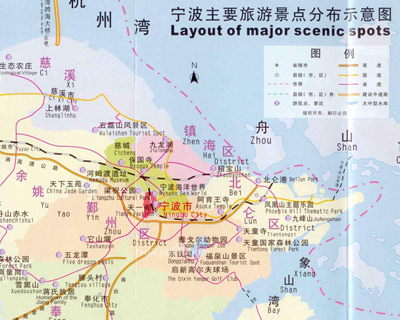 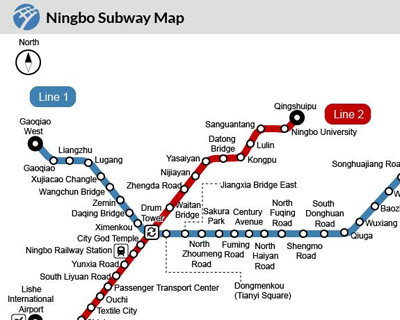 After a Ningbo tour, you can take a bullet train to Shanghai, Hangzhou, Huangshan, Suzhou, Shaoxing, Jiaxing, Yuyao to find more interesting attractions. Also, you can go to the sacred Putuo Mountain in Zhoushan to feel rich Buddhist culture. Discovery now! 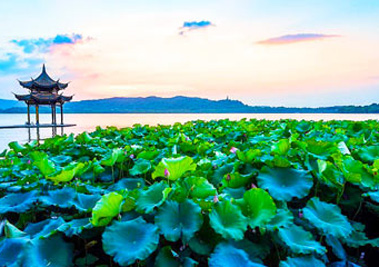 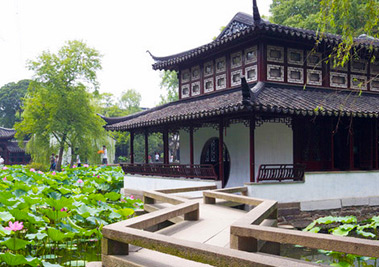 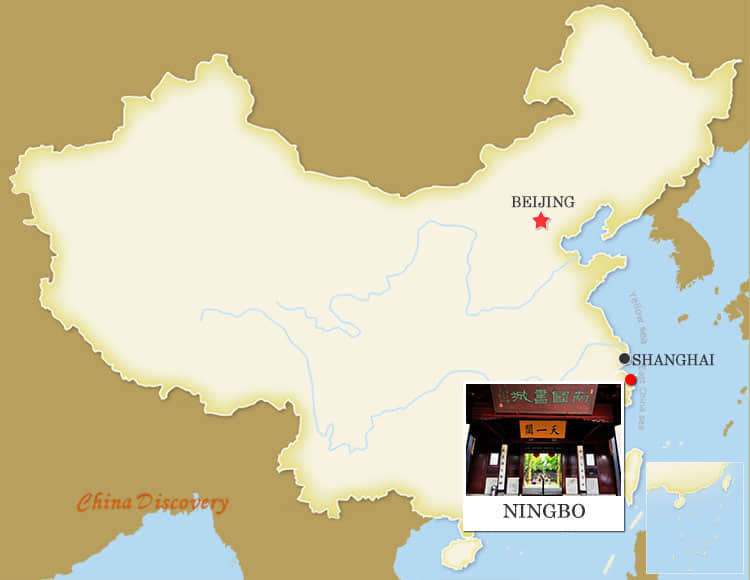 You can spend 2 to 3 days to see all the classic attractions in Ningbo, like the Tianyi Pavilion, Xikou Scenic Area, Dongqian Lake, Baoguo Temple, Asoka Temple, and Ningbo Old Bund. If you have more time, Putuo Mountain in Zhoushan, Former Residence of Lu Xun, and other famous places in Zhejiang province are very worth for a visit.

If you do not have enough time, do not miss Tianyi Pavilion and Xikou Scenic Area, which will take about 1 to 2 days.

You can feel free to contact our professional travel consultants to customize your own itineraries which would perfectly suit your likes and requirements. 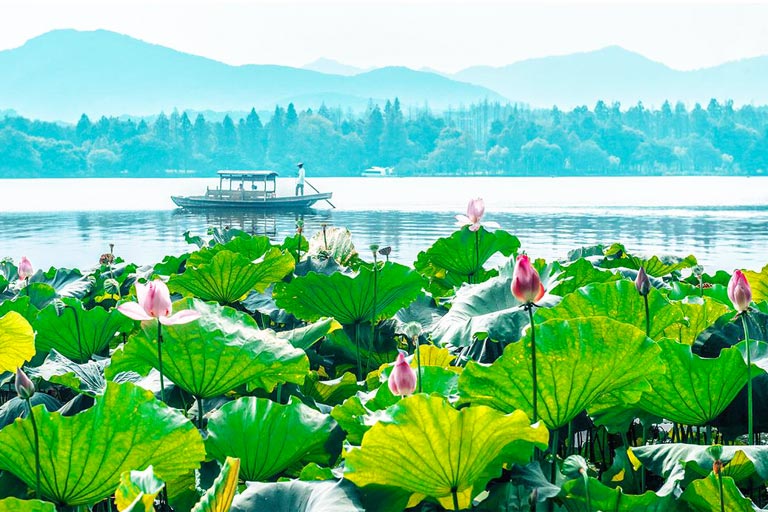 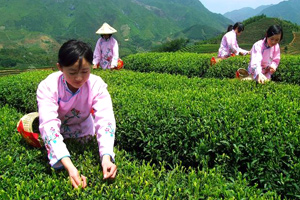 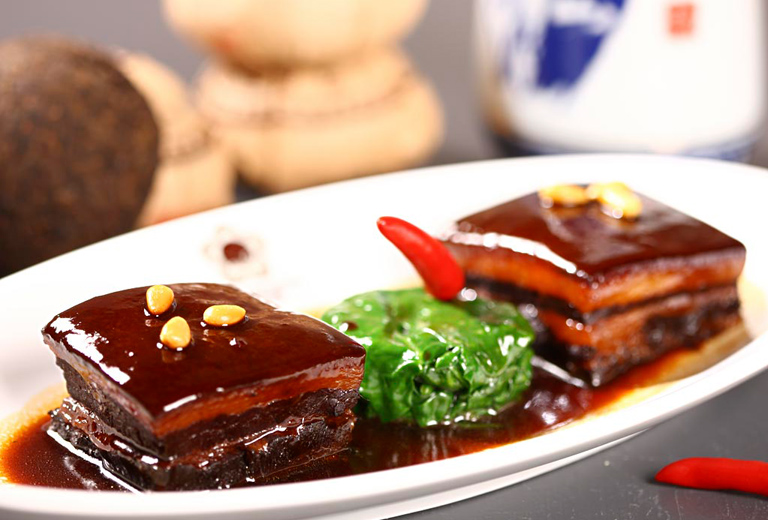 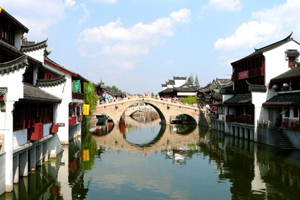