As the second largest civil airport and second international airport in Anhui Province, Huangshan Tunxi International Airport is the only airport serving tourism of Mount Huangshan in Huangshan City and operates several internationl flights. It is one of the major transfer spots to Yellow Mountain from Huangshan. Currently the airport is well-connected with Beijing, Xian, Guilin, Chengdu, Chongqing, Yichang and other popular tourist cities in China and Taipei and Incheon (Seoul, South Korea) in Asia.

With a total area of 2581 acres (about 1.7km²) of land with a 2600 meters-long, 45 meters-wide runway, the airport accommodated about 7,5000 passengers in last 2017. The domestic terminal building covers an area of 10,000 square meters and the international waiting hall is 4,600 square meters. (You may expect it not large as other international airport in Beijing and Shanghai.) The Arrival and Checking Counters are located on the first floor, and the Departure Hall lies on the second level. There are rows of comfortable and free sofas passengers can rest and charge phones, stores to buy local specialties on two floors. 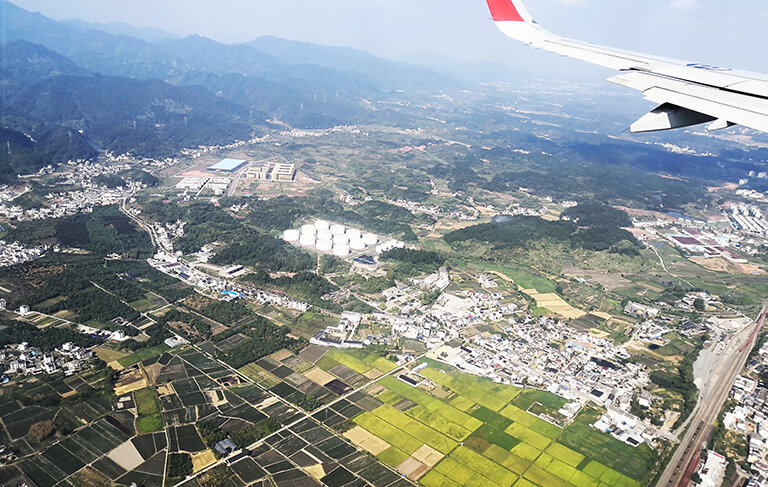 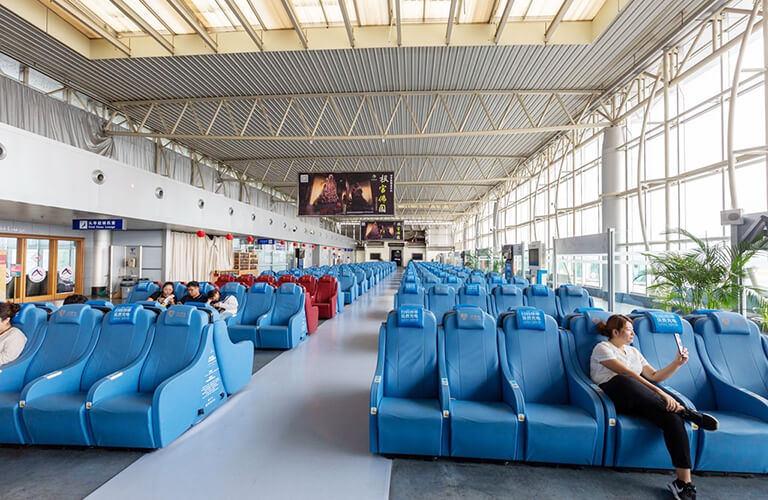 Air China operates nonstop round-trip flights between Beijing and Huangshan weekly. The flights are nearly daily scheduled in night hours with a flying duration of about 2 hours. The carriers are Boeing 737-800 airliners. If you are going to fly from Beijing to Huangshan, you can take Flight CA1551 which departs at 18:35 from Beijing Capital International Airport (IATA: PEK, ICAO: ZBAA) and lands at Huangshan Tunxi International Airport at 20:45 at night. The reverse flight leaves Huangshan at 21:30 and arrives in Beijing at 23:40, nearly midnight. >> 6 Days Yellow Mountain Vacation from Beijing

Currently, there is no direct flights running from Shanghai to Huangshan or Huangshan to Shanghai, but connected flights with transit in Wenzhou for longer duration. More conveniently, there are over 10 daily high speed bullet trains (G trains & D trains) tourists can take to travel between Shanghai and Huangshan, with a short train trip of 2.5 hours. The trains depart from about 08:00am in the morning and 19:00pm in the evening. You can take trains at Shanghai Hongqiao Railway Station and Shanghai Railway Station, and get off at Huangshan North Railway Station to transfer to Yellow Mountain. Come to enjoy our 5 Days Shanghai Huangshan Tour by High Speed Train!

Apart from the above main air routes to Huangshan, other hot tourist cities like Chengdu, Chongqing, Shenzhen, Hefei, Wuhan and Zhengzhou also have weekly flights to and off Huangshan. Therefore, you have plenty of choices to design your Huangshan tour in China. Please note that the weekly schedules are subject to change according to adjustment of airline companies in different seasons.

Currently, there are more than 20 daily connecting flights flying from Hong Kong International Airport in Hong Kong (IATA：HKG，ICAO：VHHH) to Huangshan Tunxi Airport. There is NO nonstop flight available until now. Travelers can choose from flights between wee hours of morning and midnight time, with duration of 5 hours to more than 1 day long. EVA Air offers the shortest connecting flights that need transfer in Taipei. Besides, others airline companies also have transferring flights to Huangshan from Hong Kong via Taipei, Wenzhou, Chongqing, Seoul, Guangzhou, Chengdu, Xiamen, Beijing, such as Cathay Pacific, China Airlines, Hong Kong Airlines and more.

Taipei and Seoul to Huangshan Flight

Huangshan Tunxi Airport is located in south of Mount Huangshan Scenic Area, about 1 hour’s driving distance, and lies about 60km of southeast Hongcun Ancient Village (1 hour & 20 minutes’ drivng) and Xidi Ancient Village (1 hour’s driving). If you want to tour downtown Huangshan City, rest yourself and then head to Mount Huangshan, you can get to the 9kms’ away Tunxi first. Or if you intend to get to Yellow Mountain directly, check our detailed traffic guide between the airport to major attractions in Huangshan.

Mount Huangshan is situated in 60km north of Huangshan Tunxi Airport. Flight tourists wishing to visit Mount Huangshan from the airport directly need to firstly transfer in Huangshan Bus Station to Tangkou (汤口), a small town at the foot of Mount Huangshan Scenic Area. Then need another transfer, from Tangkou to cable stations in front or back mountain areas. Since there is no direct bus from the Huangshan Airport to Mount Huangshan, the most convenient and recommended way is taking a private vehicle and using our transportation service, saving your time on complex transfers.

1. Huangshan Airpor to Bus Station: Taxi service and Bus Line 19 are available. The distance is about 7km. It takes around 15 minutes driving and 20 RMB, while public bus takes nearly 50 minutes longer.

2. Huangshan Bus Station to Tangkou Town: There are regular shuttle buses departing from Tunxi to Tangkou from 06:30 in the early morning to 18:00 in the afternnon. The whole trip is about 70km and takes about 1 hour. Ticket is 20RMB per person.

3. Dongling/Zhaixi Transfer Center to Mount Huangshan: Both stations have Park Buses to the cable car stations on Huangshan Mountain, where visitor could buy entrance tickets and cableway tickets. The last transfer is about 30 minutes. The fare is 20 RMB per passenger. 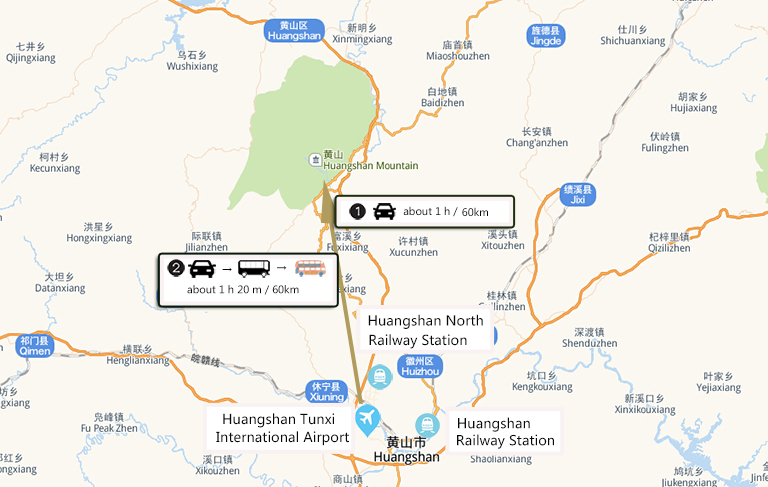 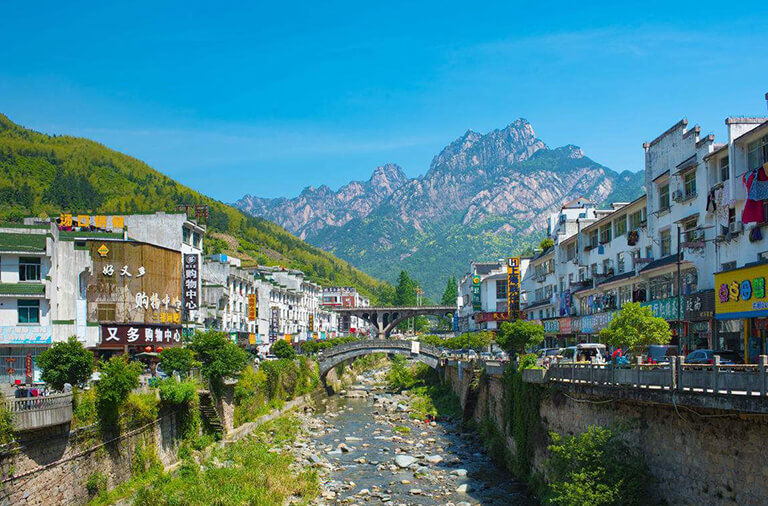 Huangshan Tunxi Airport is located near the China Anhui Cuisine Museum, about 9km northwest of downtown Huangshan City, and is closer to the city center than Huangshan North Railway Station, the only high speed train station of Huangshan. Upon arrival, you can take a taxi, airport shuttle bus near the exit to get to Tunxi, which takes about 20 minutes. Usually, the local taxicab in Huangshan charges 7RMB of the first 3km and afterwards 2RMB per kilometers. The airport express are minibuses priced 6 RMB for each passenger to Tunxi. Still, there are local Bus Line 18 and Line 19 available.

Currently, there is neither direct transportation to Hongcun nor to Xidi Ancient Village. You can get there by private driving or transfers from Huangshan Bus Station. 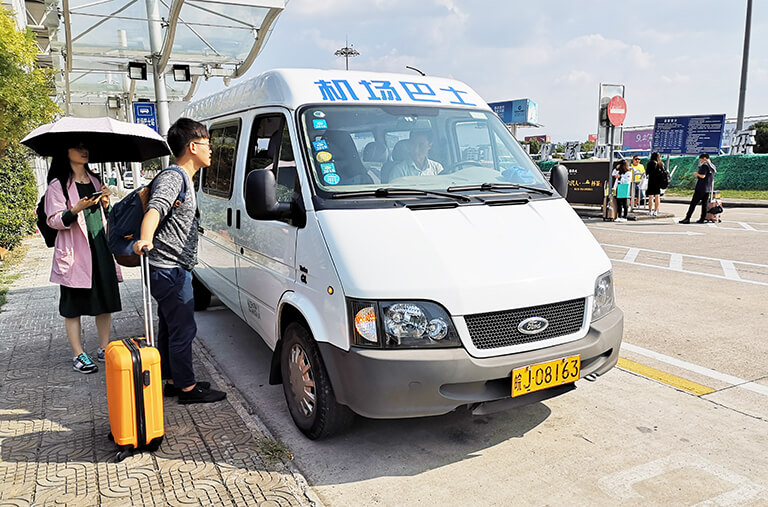 1. When to Book Flight Ticket to Huangshan?

Nearly all connected cities only have 1 daily flight to Huangshan. It’s difficult to book tickets, especially during high seasons. Thus, you are highly suggested to book ticket as early as possible once your travel schedule is finalized.

2. Which City to Departure from?

Beijing, Guangzhou, Shenzhen, Chongqing are main gateway cities to take flights to Huangshan. And themselves are very popular destinations with abundant travel resources tourists can explore.

3. How to Collect (Receive) Flight Ticket?

Most flight tickets are booked online, so firstly you will receive an e-ticket. You will change a paper ticket when you checking in your flight at a counter in the airport.

5. Do kids have discounted flight ticket? 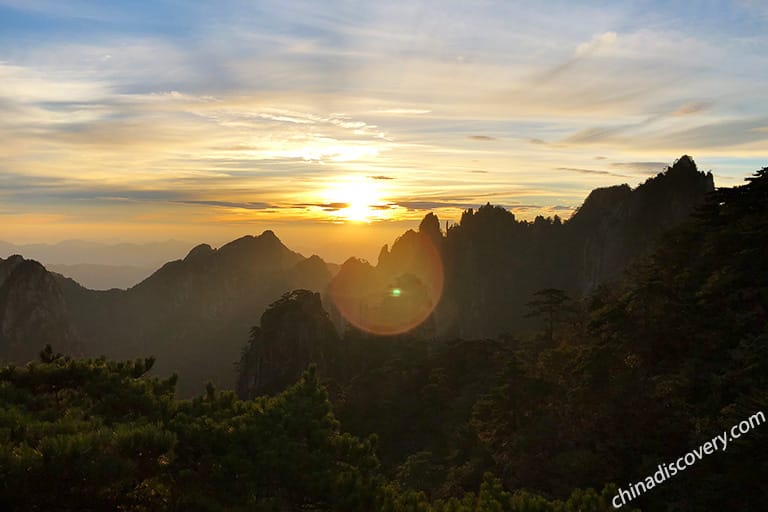