How to Travel from Beijing to Huangshan in 2022: Train or Flight?

As China’s old and present capital city, Beijing owns brilliant culture and long history which breed seven NESCO World Cultural Heritages Sites and many other worth-seeing attractions. Undoubtedly, it is regarded as the well-deserved premier destination for foreign travelers. It’s easily to extend a Beijing tour to many other cities, including Huangshan, which is named after its picturesque Huangshan Mountain (Yellow Mountain). Traveling from Beijing to Huangshan gives you a great chance to explore one of the best parts of China’s cultural and natural charm.

Why Travel from Beijing to Huangshan

1. Beijing Can Be Reached Conveniently

2. Enjoy A Tour of China’s Various Cultural and Natural Landscapes

3. Take Advantage of Convenient Transfer between Beijing and Huangshan

Where are Beijing and Huangshan Located

Huangshan, a prefecture-level city in Southern Anhui Province, Eastern China, named after the famous UNESCO World Cultural and Natural Heritage, is the popular gateway to visit Mount Huangshan. It borders Chizhou City (池州市) and Xuancheng City (宣城市) of Anhui in the north, Jiangxi Province in the southwest and Zhejiang Province in southeast. The city lies in the south of Capital Beijing with a long distance of about 1,330km (826 miles), crossing Heibei and Shandong Provinces in North and East China regions respectively.

Currently, tourists can take both flights and trains, including bullet trains and normal trains, to travel to Huangshan from Beijing within short hours. The daily Beijing Huangshan Flight departing at Beijing Capital International Airport and arriveing at Huangshan Tunxi Airport only needs 2 hours. Meanwhile, the high speed bullet trains leaving from Beijing South Railway Station and arriving at Huangshan North Railway Station takes just half a day. Check the following trains and flights information to select your perfect way to Huangshan. 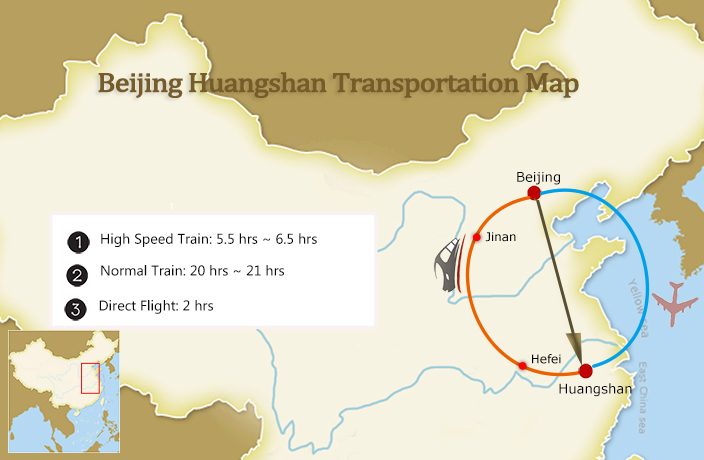 Nowadays, the convenient, budget and comfortable train travel to Huangshan from Beijing and from Huangshan to Beijing by less than half a day is getting more and more popular among Yellow Mountain visitors. By that way, you can not only experience advanced facilities onboard as locals, but also see much of the country of different styles in a single trip. Besides, there are a lot of daily trains you can choose from. There are altogether 10 trains running from Beijing to Huangshan every day, including 8 high speed bullet trains (G Trains or Gaotie) and 2 normal trains (K Trains). Interested in a special China train travel? Get the detailed information below!

Nowadays, the 6-hours’high speed bullet train travel from Beijing to Huangshan and Huangshan to Beijing is more than a time-saving transportation, but also an in-style travel experience to physically witness the great engineering achievements and variation of different landscape in China along the way. While enjoy the convenient, comfortable, clean and punctual bullet train trip, you have more chance to chat with locals.

With the operation of Beijing Fuzhou High Speed Railway, there are totally 8 pairs of bullet trains running between Beijing and Huangshan from early morning to afternoon. The railway length is nearly 1306km, and the fastest train takes only 5.5 hours and other trains need about 6.5 hours. Once starting, the trains will pass by more than 10 midway stations, including stations like Jinan West (济南西), Xuzhou East (徐州东), Hefei South (合肥南) and so on.

Beijing South Railway Station is the largest train terminal of Beijing, as well as the busiest one that handles the highest number of trains to/off Beijing. It is located between 2nd and 3rd Ring Roads, about 7km (4.5 miles) of downtown Beijing, 8km (0.5 hour’s driving distance) from the Palace Museum (Forbidden City) and 38km (1 hour’s driving distance) northeast of Beijing Capital International Airport. Passengers can get to the station by taxies, Beijing Subway (Line 4 and Line 14), airport shuttle bus (Route 10 from Beijing Capital International Airport) and lots of local buses. >> More about Beijing South Railway Station 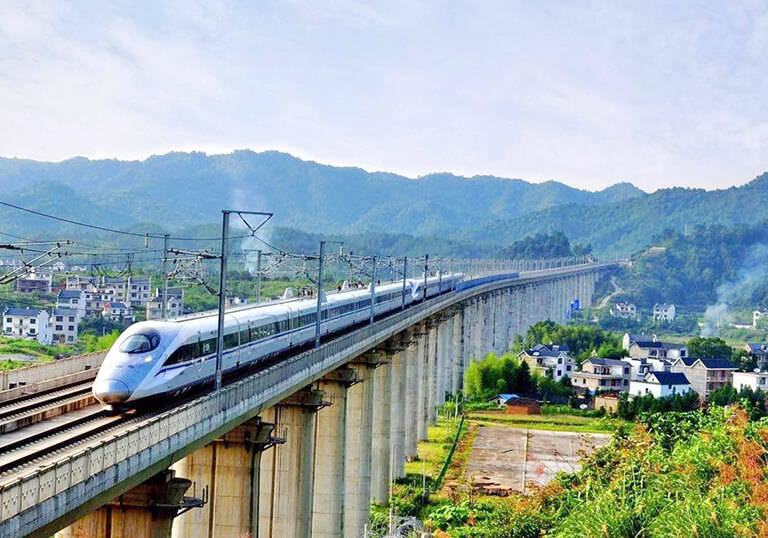 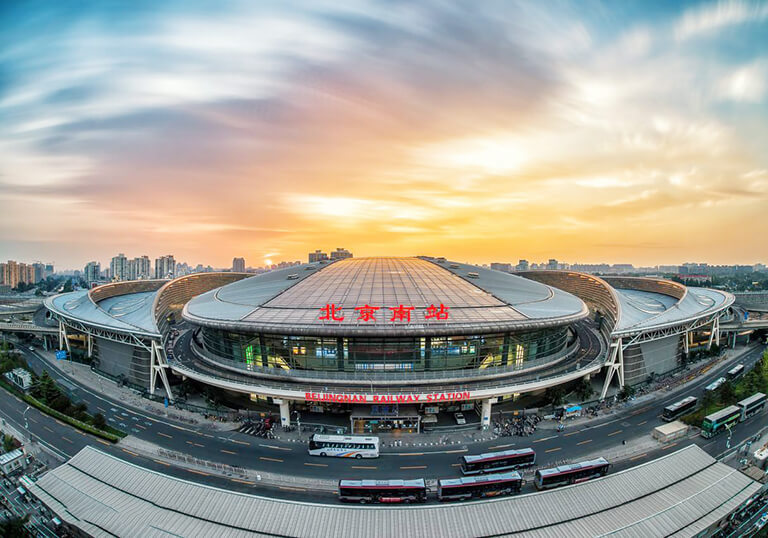 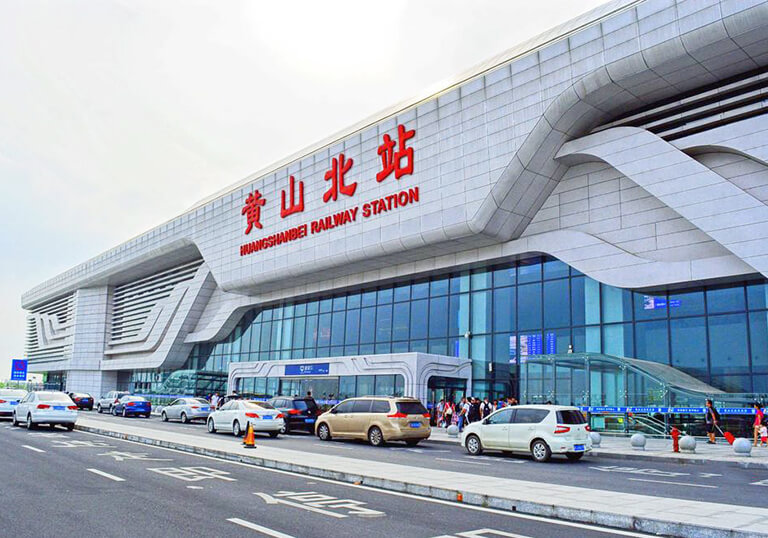 Tips: The above train times are subject to change. You can contact us to check the up-to-date train timetable and book tickets.

>>Board & Disembark from High Speed Train

Note: On the above normal trains, Business Class Seats are not available. If you plan to take an overnight train to get to Huangshan from Beijing or opposite way, you’d better take the Soft Sleeper, because it offer more private space and comfortable berth for your long journey.

Beijing to Huangshan/Huangshan to Beijing Flight

Taking a 2 hour’s flight from Beijing to Huangshan and Huangshan to Beijing is also a very convenient way for Mount Huangshan travelers. With short flying, one can easily travel from ancient capital Beijing to discovery stunning natural beauty of Mount Huangshan. Every day, Air China, a reliable and experience air company, offers one pair of round-trip (non-stop) flights between Beijing and Huangshan. And all the flights depart and land in the evening hours. Check the following latest updated flights schedules between Beijing and Huangshan: 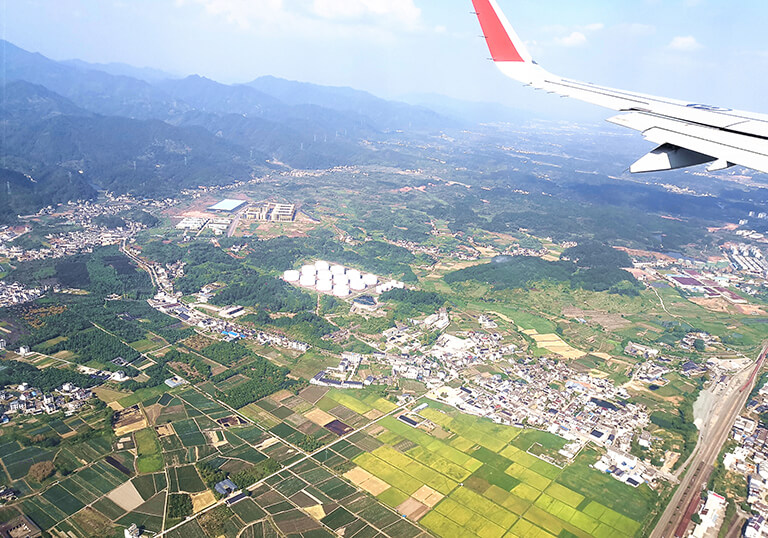 Aerial View on Flight to Huangshan 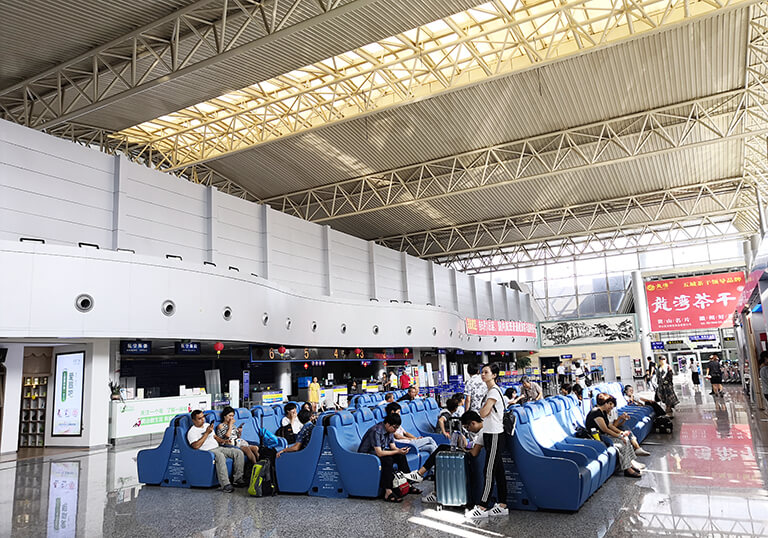 Train or Flight? – The Most Convenient Way to Go

As a fact, both the high speed bullet train and flight are popular ways to reach Huangshan from Beijing and to Beijing from Huangshan. While planning your Beijing Huangshan Tour, you can refer to useful details, regarding of costs, duration, transportation and other aspects, to decide a suitable way to go. The following comparison takes the transportation from Beijing to Huangshan as an example.

● Transportation for Departure and Arrival

(For departure) Both Beijing South Railway Station and Airport can be reached by taxi and subway. However, Beijing South Railway Station is located in downtown Beijing, while the airport lies in northeast suburb of Beijing. So tourists in central Beijing need more time to get to airport and do the checking at least 45mins prior to departure. (After arrival) Huangshan North Railway offers direct bus and shuttle to Mount Huangshan, Hongcun and Xidi Ancient Villages with closer driving distance while the airport, closer to downtown Huangshan (Tunxi), only has airport express and local taxi to Tunxi.

Every day, Beijing sends 8 high speed bullet trains to Huangshan, departing from about 07:30 in early morning to 15:30 in the afternoon. That means, train travelers have lot of choices. And the whole train trip takes about 5.5 hours ~ 6.5 hours. However, there is only one daily flight operating from Beijing to Huangshan, leaving at 18:35 and landing at 20:45 in the evening. Thus, you should booking airline tickets as early as possible if you prefer to fly there. 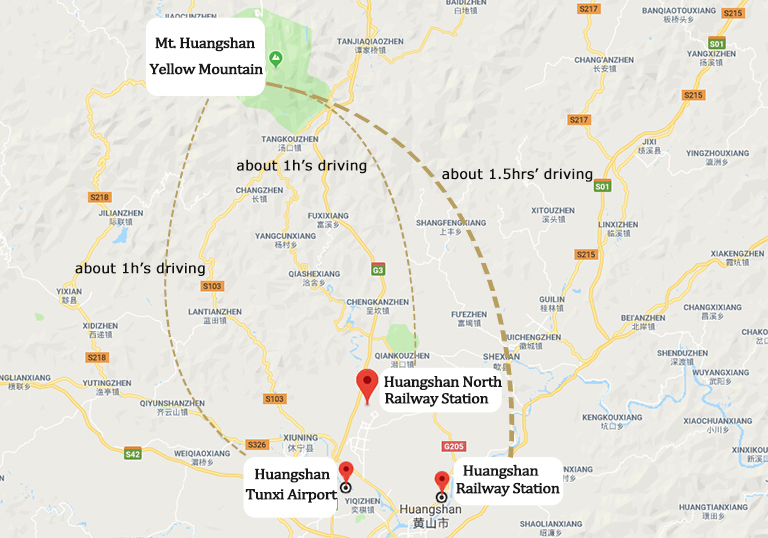 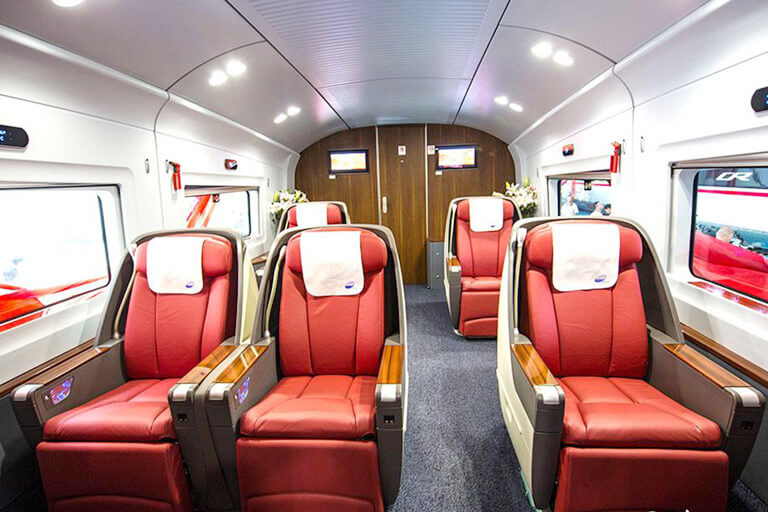 How to Plan a Beijing Huangshan Tour

Touring Beijing and Huangshan together gives tourist the excellent opportunity to enjoy magnificent top World Cultural and Natural Heritages of China. After you visit the iconic attractions in Beijing, you can experience the newest and fast bullet train to Huangshan and then start your amazing Huangshan tour.

You are suggested to spend at least 2 or 3 days touring the landmarks in Beijing. In short 3 days, you are able to see the collection of Chinese imperial architectures, like Forbidden City and Temple of Heaven, as well as be amazed by some modern buildings (Bird’s Nest and Water Cube). After that, enjoy a hiking experience in Great Wall of China – the manmade wonder with a history of thousands of years. We also advise you to enjoy the local life by visiting Beijing Hutongs and riding an interesting rickshaw. With one more day, don’t miss China’s largest imperial garden – Summer Palace. It is also available to travel 798 Art Zone to get an artsy vibe which stands in contrast to the old atmosphere of Beijing's historic sights.

A Beijing tour can’t be completed without a visit to Great Wall. For Great Wall enthusiasts, you may be interested in more than one section of Great Wall. Check our Great Wall Tours for more enjoyable experience. 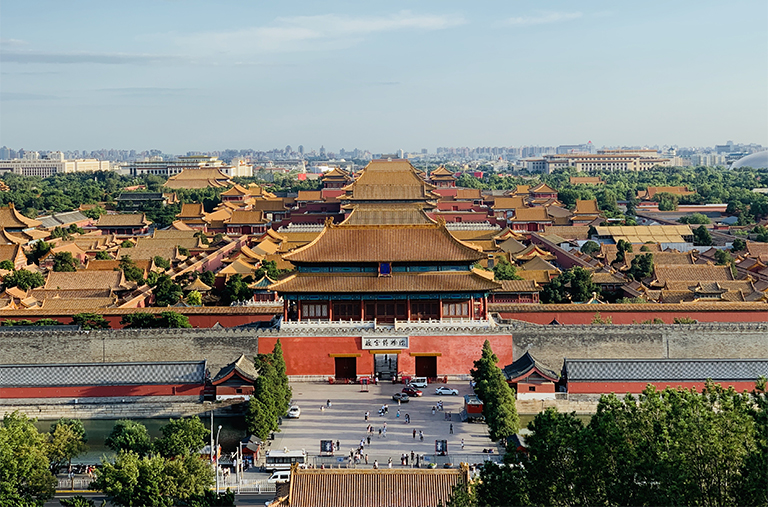 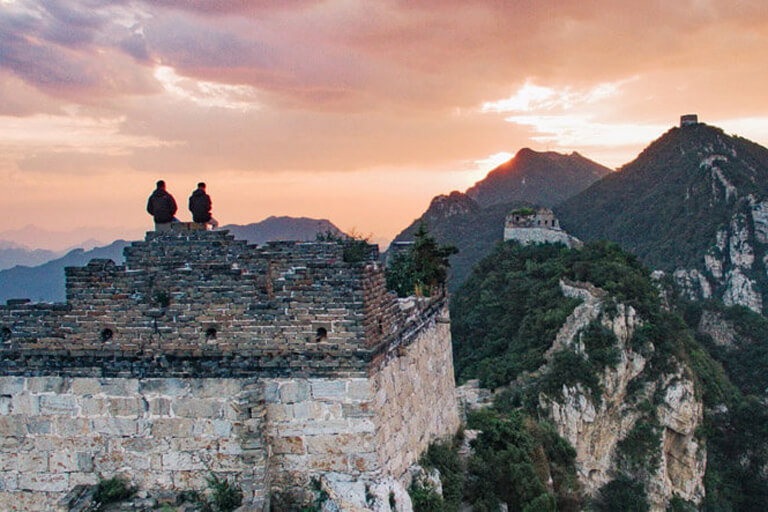 How to Plan a Huangshan Tour

Usually, a Huangshan tour takes about 3 ~ 4 days. Yellow Mountain is the essence of Huangshan. It can be divided into Front Mountain, Back Mountain and West Sea Grand Canyon. The Front Mountain features sublime peaks, interesting stone paths and far-reaching views. The Back Mountain is famous for idyllic smaller peaks and shapely pine trees. In West Sea Grand Canyon, there are many odd-shaped rocks resembling different figures. It is recommended to spend 2 days getting amazed by Huangshan’s natural beauty. Then you can explore one or more Huizhou typical ancient villages, like Hongcun Village and Xidi Village – both listed in UNESCO World Cultural Heritage Sites.

If you want to discover Huangshan and Huizhou better, you can explore more villages (like Nanping, Bishan, Mucheng, etc.) in more ways (like hiking, biking, hot spring, photography or rural living experience). 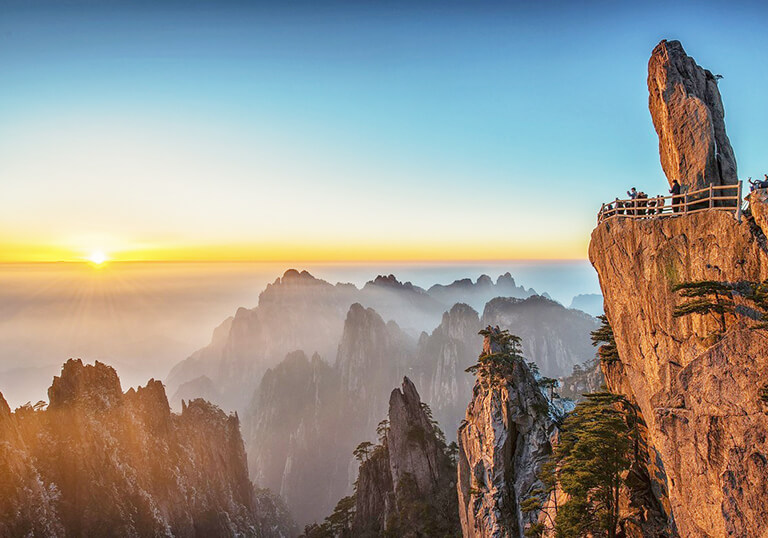 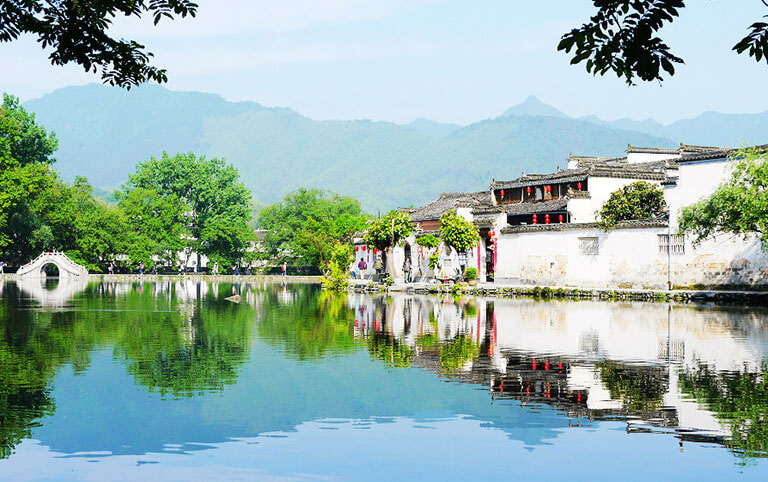 China Discovery provides you worryfree private tour packages which covers sightseeing, dining, tour guide and transfers between Beijing and Huangshan. The tour guide and driver will pick you up at airport, railway station to your Hotel, and escort you all the way to focus on sightseeing and save your time on complicated local transfer. If you have more questions about transportation between Beijing and Huangshan, please free to contact us and our experienced travel consultants are always ready to help! 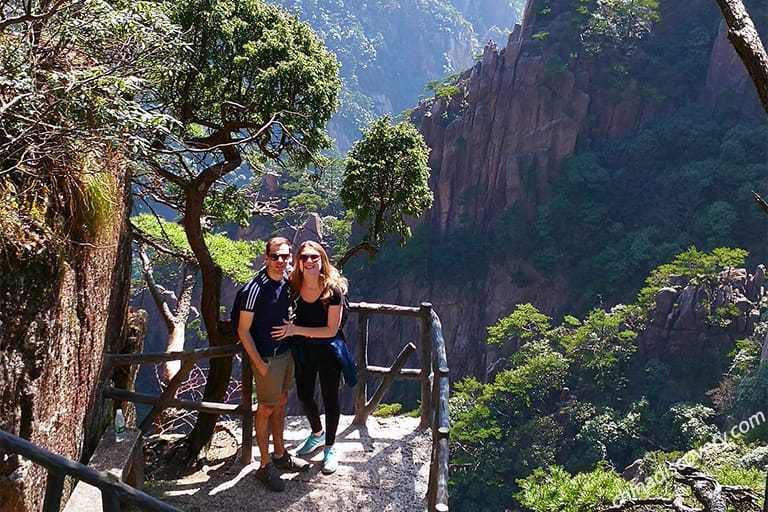