How to Get to Zhengzhou & Get around Zhengzhou 2023

Where is Zhengzhou Located in China?

Zhengzhou, the capital city and the largest one in Henan Province, lies in north-central Henan and hinterland of China’s Central Plains. It is located about 150 km from downtown Luoyang, just 70 km from Kaifeng, around 700 km southwest of Beijing, 940 km northwest of Shanghai, 490 km east of Xian and 1,450 km from Guangzhou.

With complete air, railway and road transportation network, the city is a vital national transport hub which can be easily reached by flight and train. A direct flight from Beijing and Shanghai to Zhengzhou merely takes 2 hours and a high speed train from Luoyang to Zhengzhou just needs 40 minutes or also. The city is also a crucial transport hub to other attractions and destinations within Henan. From Zhengzhou, you can conveniently transfer to Shaolin Temple in Dengfeng, southwest of Zhengzhou, Yuntai Mountain in Jiaozuo, Yin Ruins of Anyang, Kaifeng and more other places. Read one the following Zhengzhou transportation guide covering different ways of transport and departure cities to plan your Shaolin Temple tours in Zhengzhou, Henna! 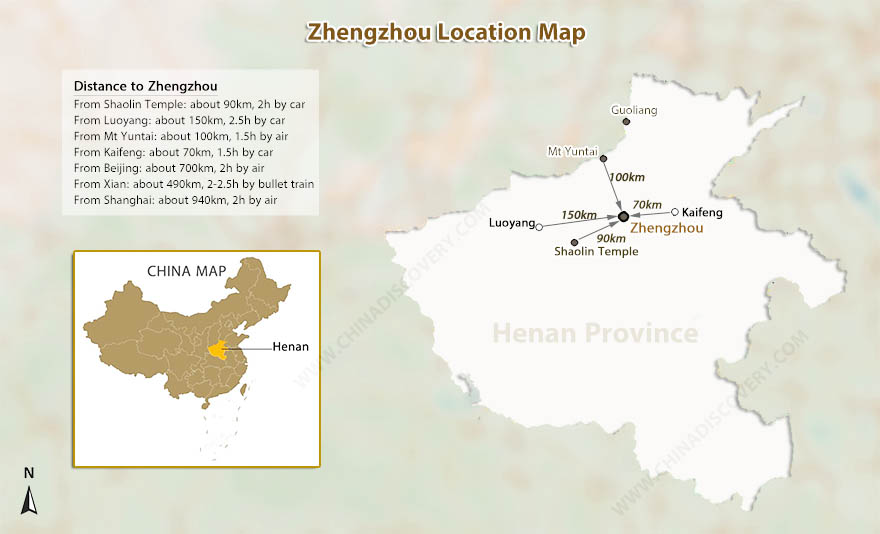 Get to Zhengzhou by Flight 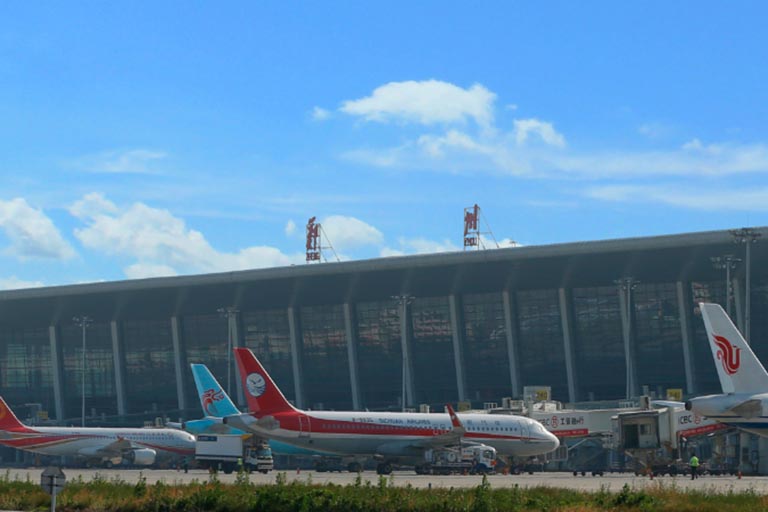 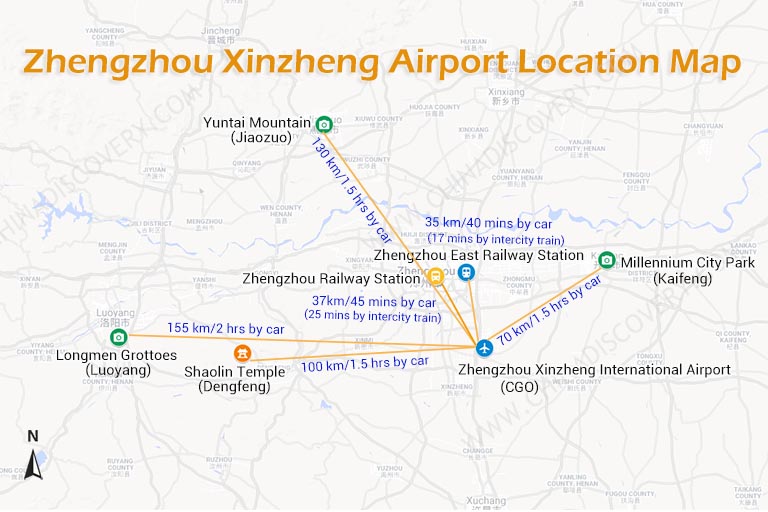 Get to Zhengzhou by Train 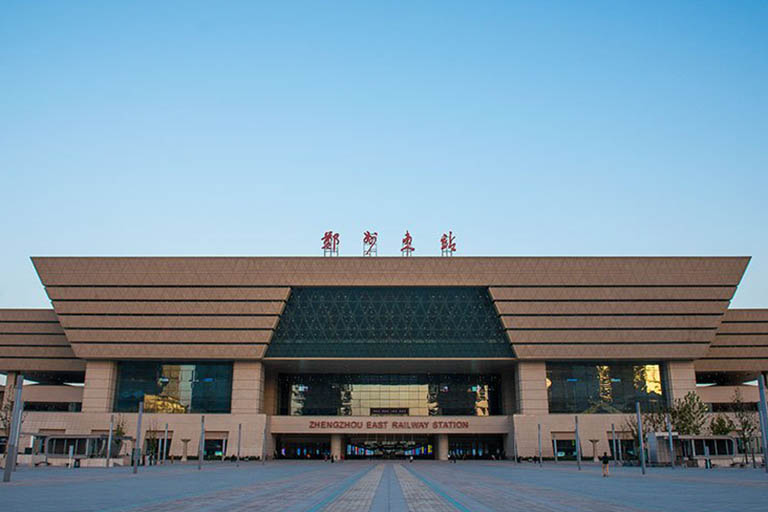 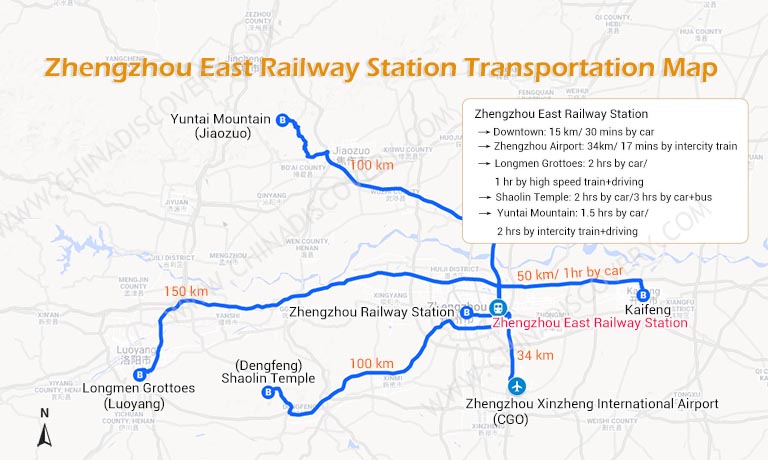 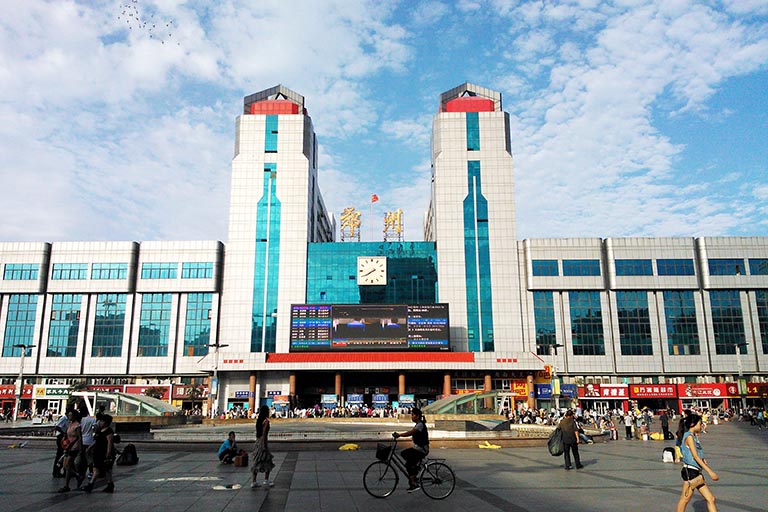 Get from Luoyang to Zhengzhou

Luoyang is located about 150 southwest of Zhengzhou. Taking a private drive and a high speed train are the two most popular ways for such a short-distance travel.

If you travel with China Discovery, we can escort you to Zhengzhou by a private car directly from your hotel in Luoyang or airport, train stations in Luoyang, or Longmen Grottoes and attractions after your trip. The drive requires almost 2 hours to Zhengzhou city center and 1.5 hours to Shaolin Temple in Dengfeng, Zhengzhou.

▶ Luoyang to Zhengzhou Train Schedules / from Zhengzhou to Luoyang 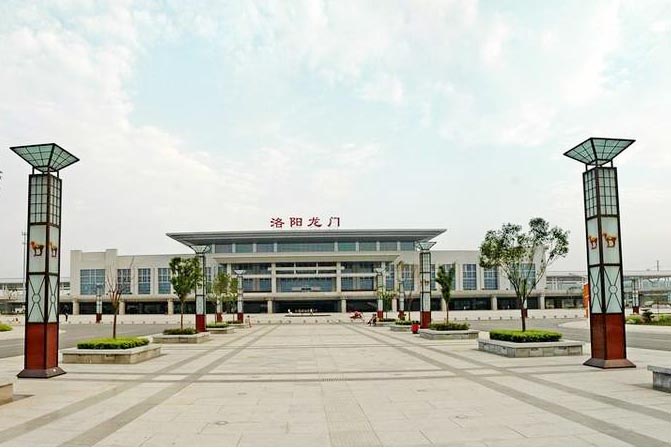 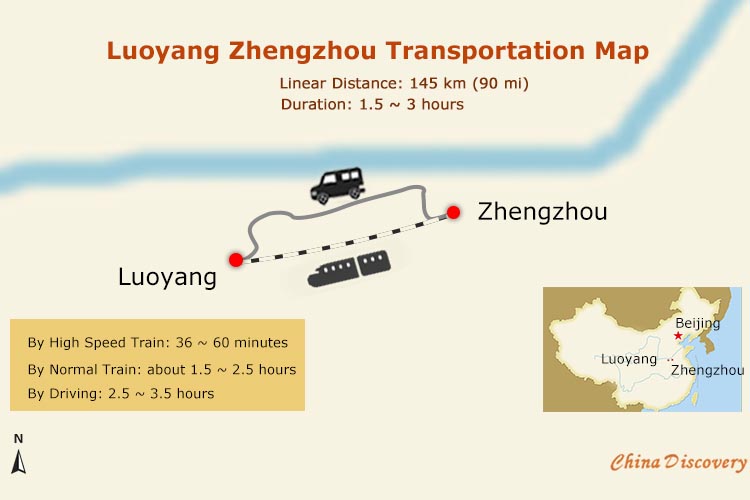 Get from Beijing to Zhengzhou

Zhengzhou is located in the southwest of Beijing, with a driving distance of 700 km. As a convenience, travelers can get from Beijing to Zhengzhou by flight or train. A non-stop flight takes approximately 2 hours and a high speed train demands 2.5 to 3.5 hours only.

By High Speed Train: Beijing has about 70 high speed bullet trains running to Zhengzhou each day. The trains depart from Beijing West Railway Station and stop at Zhengzhou East Railway Station after 2.5-3.5 hours. You can choose from a train leaving Beijing between nearly 06:30 and 20:35. Three kinds of tickets are sold: First Class Seat, Second Class Seat and Business Class Seat.

After arrival, you can use private transfer service of China Discovery or public transportation from the airport/train station to the downtown area and Shaolin Temple. If you want to visit Shaolin Temple by public transport, you can go to Zhengzhou Long-distance Bus Center Station (very close to Zhengzhou Railway Station) to take a bus. Besides, you can take a high speed train to visit Luoyang from Zhengzhou East Railway Station. 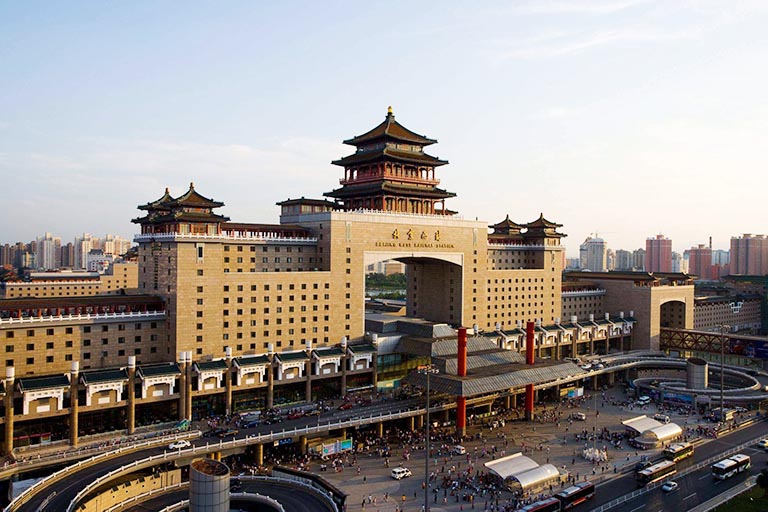 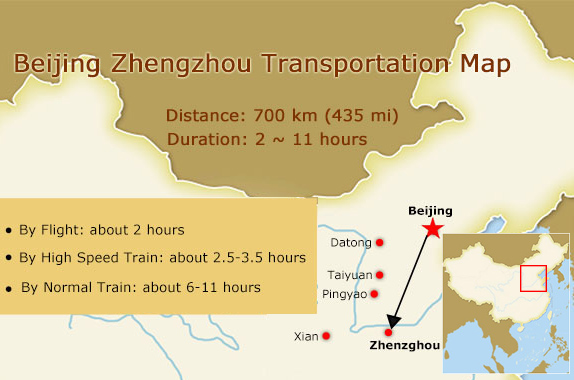 Get from Shanghai to Zhengzhou

Shanghai is around 940 km southeast of Zhengzhou and offers both direct flights and trains to Zhengzhou per day.

By Normal Train: Still, there over more than 15 normal trains (some are overnight trains) offered. They start from Shanghai Railway Station and stop at Zhengzhou Railway Station after driving for 9 to 14 hours. 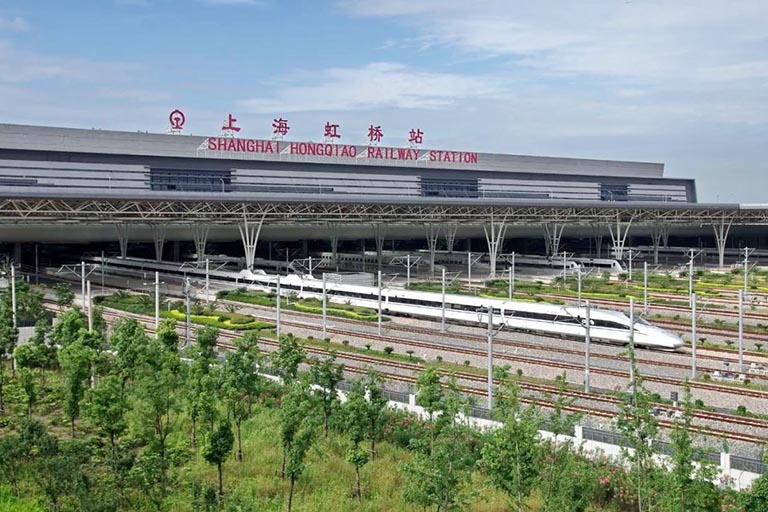 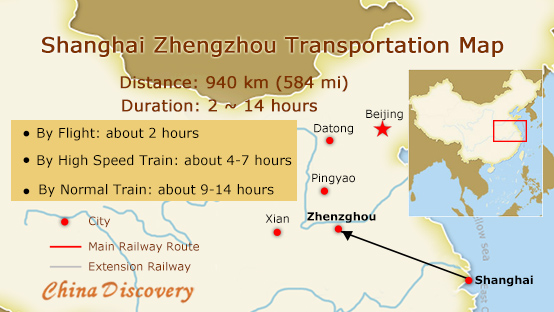 Get from Xian to Zhengzhou

Xian is located nearly 490 km west of Zhengzhou with Mount Huashan and Luoyang between them. Making a train travel is the main traffic and the popular way to get from Xian to Zhengzhou and Zhengzhou to Xian, and there is no direct flight flying between the two destinations.

By High Speed Train: Tourists can choose from over 90 high speed trains every day. They run from Zhengzhou from 06:30 to 21:00 and the fastest train takes less than 2 hours. The majority of the trains starts from Xian North Railway Station to Zhengzhou East Railway Station and a very few reach Zhengzhou Railway Station. 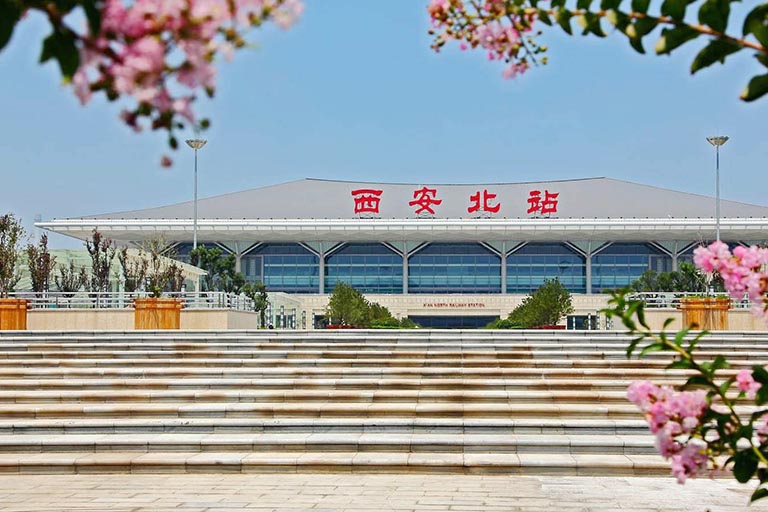 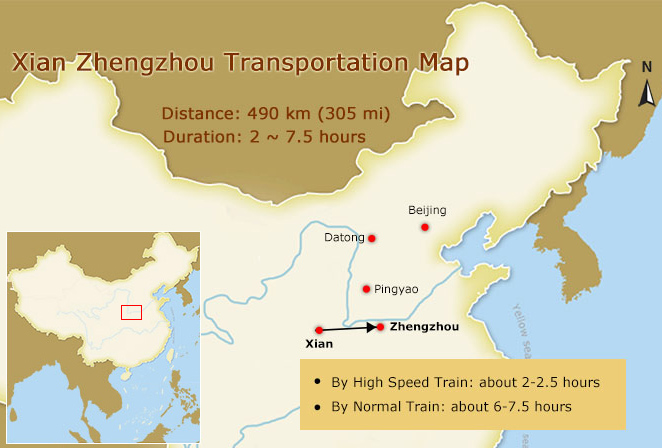 Get from Guangzhou to Zhengzhou

By Normal Train: Guangzhou Railway Station and Guangzhou East Railway Station meanwhile offer a dozen normal trains to Zhengzhou, with duration of 15.5 to 19.5 hours. They are all overnight trains arriving Zhengzhou the next day. 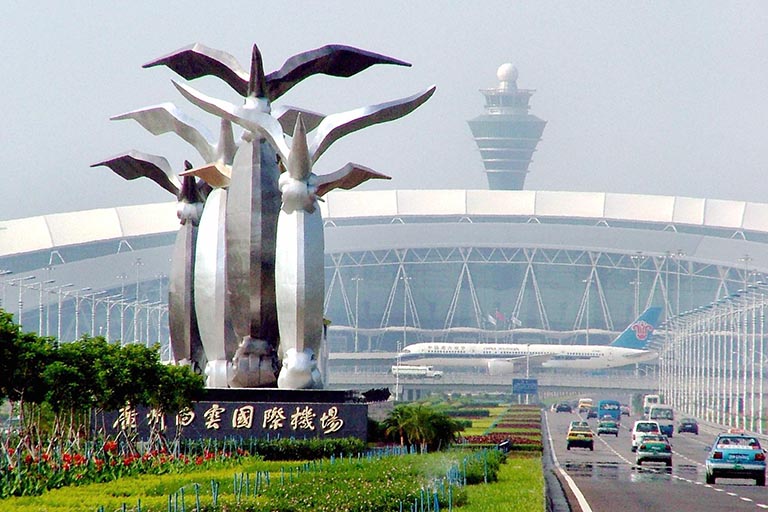 Get from Zhengzhou to Shaolin Temple

By Private Transfer: China Discovery offers time-saving and efficient transfer from Zhengzhou to Shaolin Temple for our guests. We can pick you up at any appointed places in Zhengzhou and will accompany you to Shaolin Temple by a clean, comfortable, safe and licensed vehicle. The drive takes about 2 hours.

▶ How to Get from Zhengzhou to Shaolin Temple 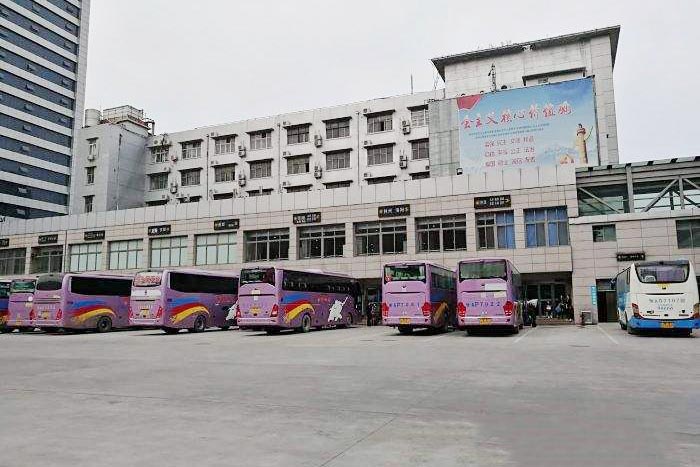 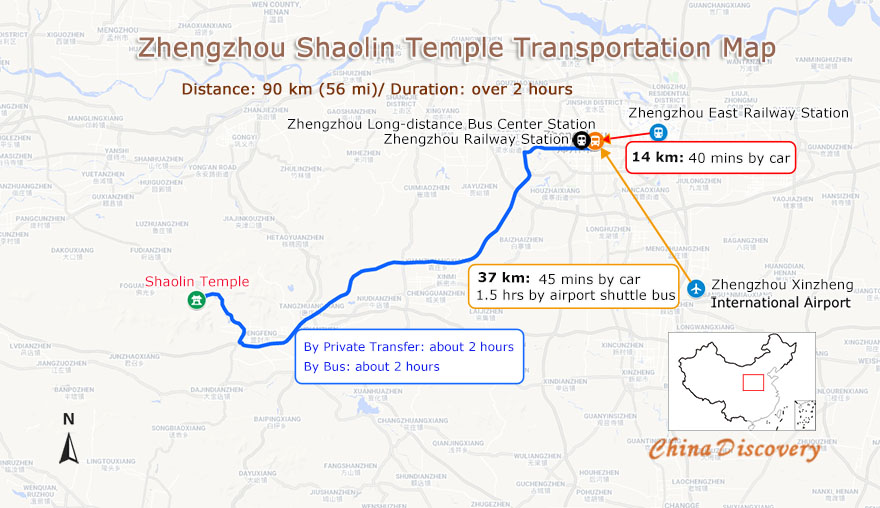 Get from Zhengzhou to Longmen Grottoes in Luoyang

Duration: 1.5 hours to 2 hours depending on the departure place

Option 2: Zhengzhou to Luoyang by Train + Luoyang to Longmen Grottoes by Driving

Option 3: Zhengzhou to Luoyang by Bus + Luoyang to Longmen Grottoes by Driving

Tourists can take buses to different places in Luoyang from different departure stations in Zhengzhou and then transfer to Longmen Grottoes by taxi or our private driving. 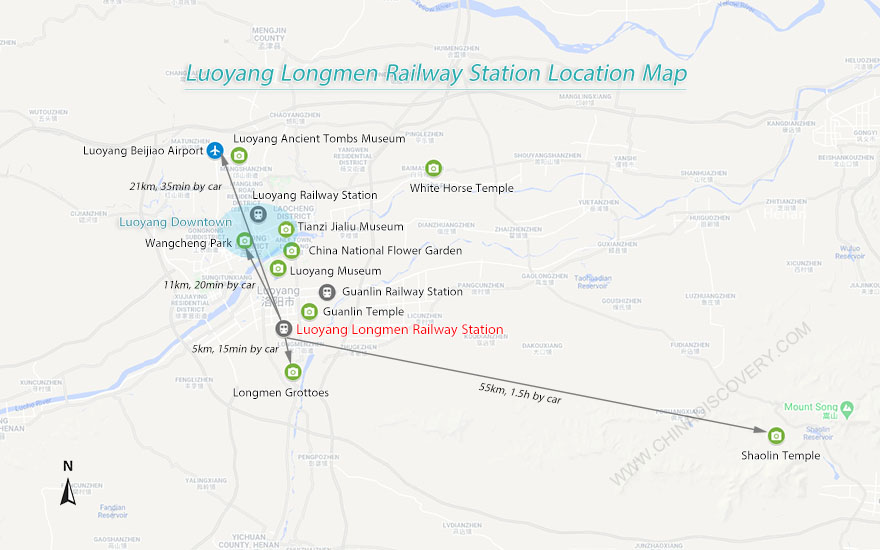 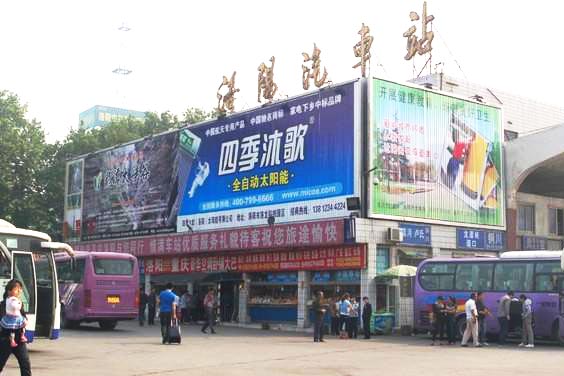 Below is major Zhengzhou to Luoyang bus schedules:

Get from Zhengzhou to Kaifeng 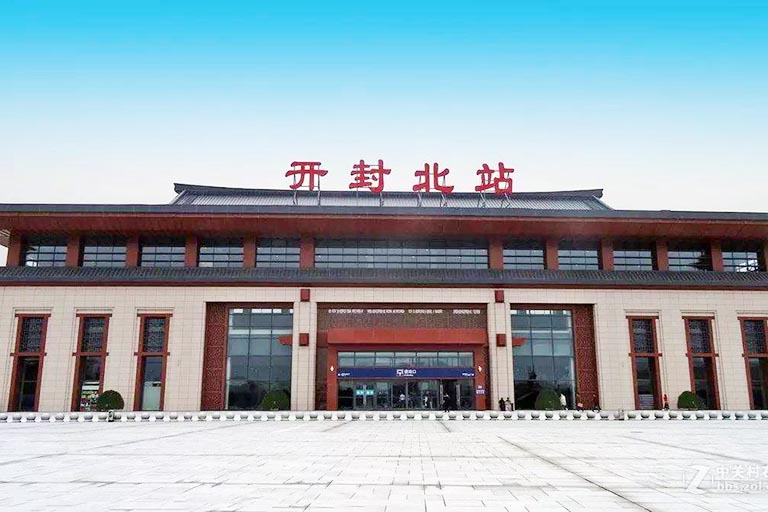 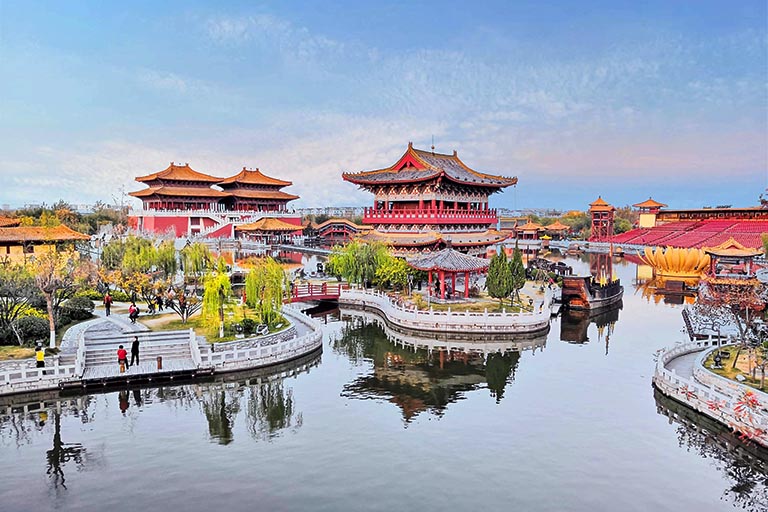 Get from Zhengzhou to Yuntai Mountain

By Bus: You can take car, van or tourist bus from Zhengzhou Xinzheng International Airport to Yuntai Mountain directly. It takes around 2 hours. 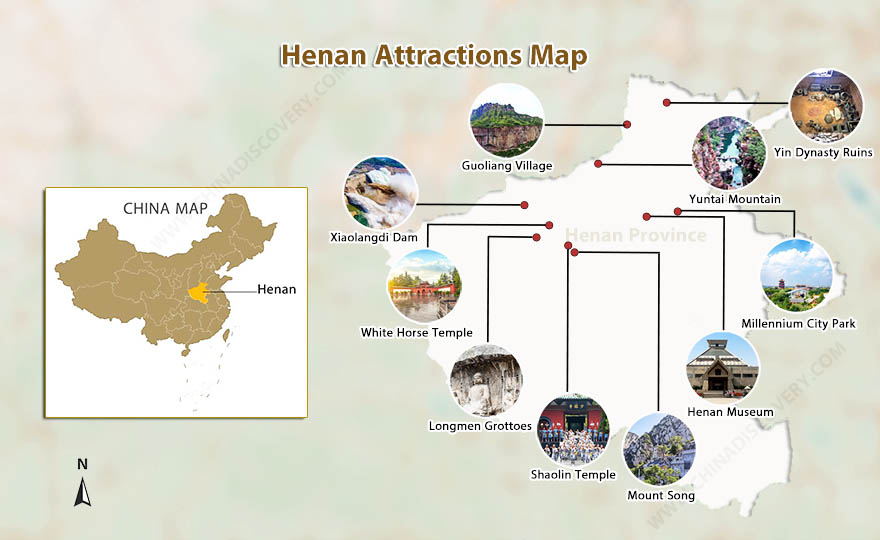 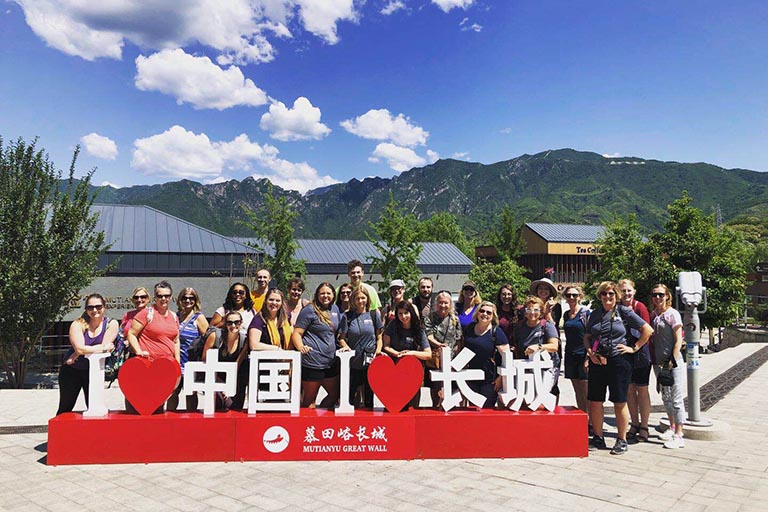 Top 3 Zhengzhou tours chosen by most customers to explore Zhengzhou in the best way. Check the detailed itinerary, or tailor your own trip now with us.