Turpan Jiaohe Airport is the only airport in Turpan and an alternative airport of Urumqi. There are only several direct flights between Turpan and Lanzhou, Changsha, Zhengzhou, etc. If you are going to visit Turpan from other cities and the flight schedule is not suitable, you can fly to Urumqi (capital of Xinjiang and has more flights with major domestic cities) first and then take a 1-hour high speed train to Turpan.

Turpan Jiaohe Airport was officially opened on July 9, 2010. It covers an area of 5300 square meters with 30 parking spots. Apart from serving flights to and off Turpan, it is also an alternate airport of Urumqi Diwobao International Airport. As of April 2020, Turpan has 4 airlines connecting 8 cities in China such as Urumqi (1h), Beijing (5.5h), Lanzhou (2.5h), Changsha (4.5h), Korla (1h), Burqin (1h15min), etc. From the airport, independent travelers can take a taxi to downtown, or take a free shuttle bus to Turpan North Railway Station first and then transfer to a bus to downtown. 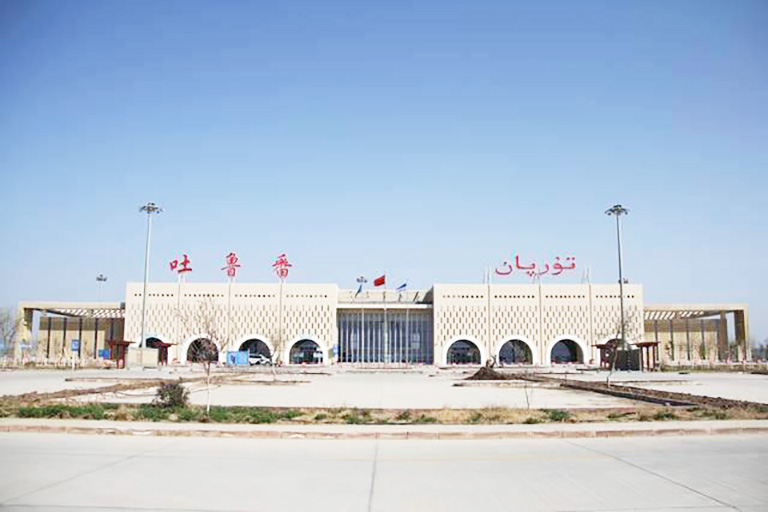 Turpan Jiaohe Airport actually has limited flights between domestic cities. The flight schedule changes a lot and you need to verify before your trip. Sometimes there are daily flights and sometimes there may be just a couple of flights in a week. You can get to Turpan by air from Urumqi (1h), Beijing (5.5h), Lanzhou (2.5h), Changsha (4.5h), Zhengzhou (4.5h), Korla (1h), Burqin (1h15min), etc.

Note: It is also viable to get to Urumqi first and then take a high speed train (1h) to Turpan or get to Turpan by train as the train schedule is more regular. 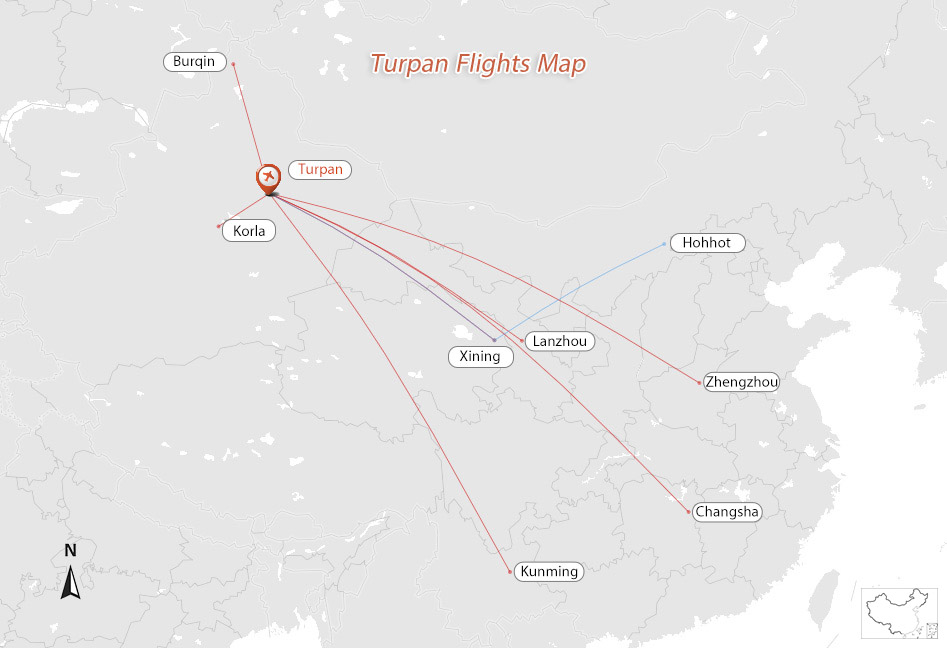 *The above flight schedule is listed for reference only and is subject to seasonal adjustment by the airline companies. You can contact us to get updated, detailed flight information.

Turpan Jiaohe Airport is located in Northwest of Gaochang District, Turpan City, Xinjiang Uygur Autonomous Region, about 17 km to Turpan downtown. You can take a taxi or charter a car to Turpan downtown first and then get to main attractions such as Jiaohe Ancient City and Flaming Mountains. Airport shuttle bus is only available between the airport and Turpan North Railway Station, which is only 2 km away. 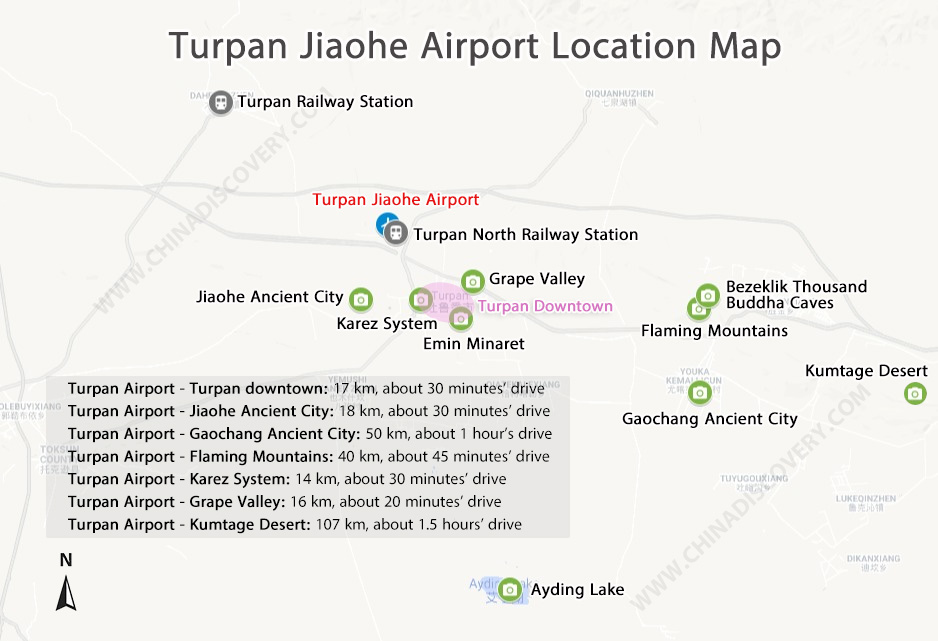 Turpan Jiaohe Airport only operates shuttle bus (for free) between the airport and Turpan North Railway Station. The railway station is only 2 km away. So if the bus is not available, you can also walk there. At the railway station, you can take a bus to downtown. The bus is only available on Monday, Thursday, Friday and Sunday. The schedule below is for your reference only:

Note: The chart above is for reference only. The specific schedule and route shall be subject to the timetable shown at the airport.

If you don’t want to wait for the bus or worry about the language barrier with taxi drivers, you can choose the private tour service provided by us. We at China Discovery provide comfortable and efficient transfer service for our clients who have booked one of our tour packages. No matter when your flight/train arrives, our friendly tour guide and driver will welcome you at the airport/train station, then escort you to your hotel or any location you want to visit with an air-conditioned and non-smoking vehicle. All the matters such as transportation, meal, accommodation, and ticket will be taken care of, and the itinerary is quite flexible, all you need to do is just enjoy your trip. >>Contact us now 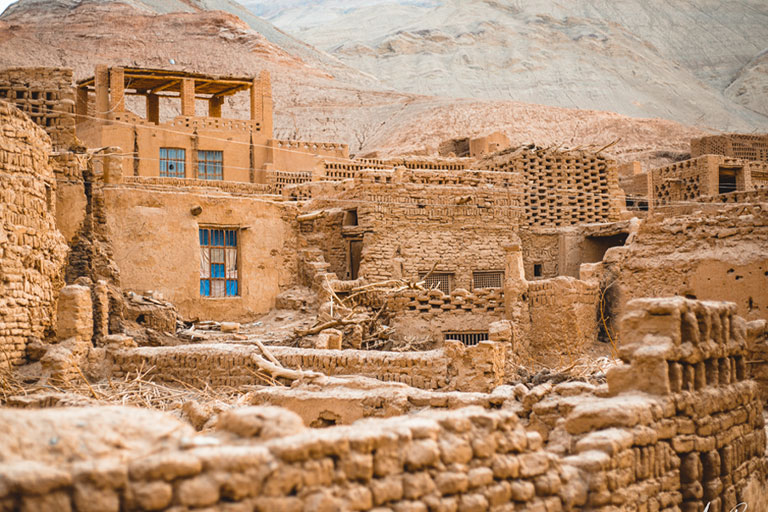 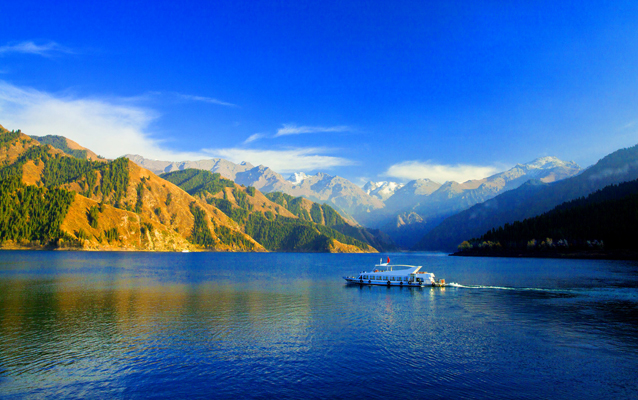 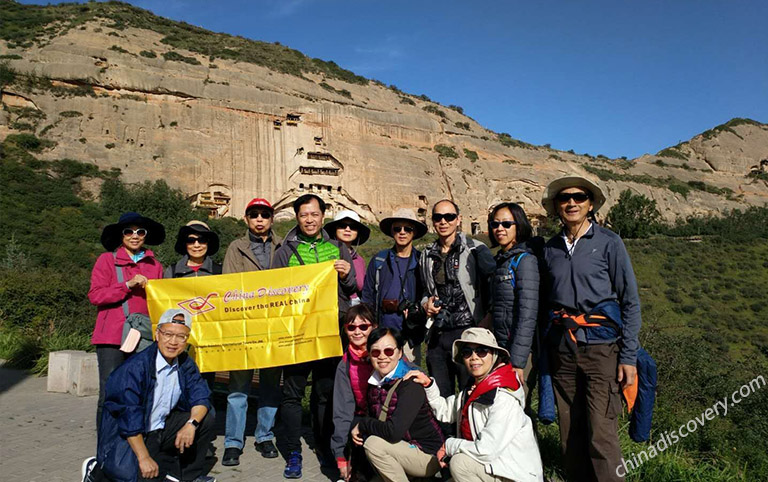