The 71 meters high Leshan Giant Buddha is the largest Maitreya Buddha statue carved out of a cliff. Giant and magnificent, this is the embodiment of ancient people’s wisdom and perseverance.

In the ancient time, the water at the joint of the three rivers was very fierce and boats were often capsized here. Thus, to slow down the water flow, Monk Haitong recruited craftsmen to build the Giant Buddha. It was first carved from AD 713, and when carving the shoulder of the Buddha, Haitong passed away. After the death of Haitong, the project was suspended for a long time. Years later, the apprentice of Haitong continued to build the Giant Buddha with the donation of local government officer Zhangchou Jianqiong. The project was suspended again when the knees were just completed. Forty years later, the project was continued again, and after the efforts of three generations, the Giant Buddha was finally completed in AD 803.

The Giant Buddha was carved from the mountain rock, with its head reaching to the mountain top and its feet standing next to the river. The total height is 71 meters; while the head is 14.7meters high and 10 meters wide, ear is 7meters high, 28 meters between knees and insteps. Its insteps can hold over a hundred people. There are 1051 spiral coils on the Buddha head, and they were all inlayed onto the Buddha head.

Design Features – why the Giant Buddha has been preserved so good

The Giant Buddha is sitting in the open air, and the weather of Leshan is humid. Under this condition, the reason why the Giant Buddha can be preserved so well is all because of its artful design. There is a delicate and invisible drainage system which played an important role in protecting the Giant Buddha from corrosion. Among the 18 layers spiral coils on the Buddha head, the 4th layer, 9th layer and 18th layer have one cross drainage; the drainage from the left side in front of the chest is connecting to the back drainage of the right arm; there are cave one the back side (the side near the mountain) connecting the two ears. These caves and drainages have composed the scientific drainage, moisture proof and ventilation system.

Besides the Giant Buddha, Leshan Giant Buddha Scenic Area has many other wonderful attractions.

On the right cliff of the Giant Buddha, there is a plank road built along with the Giant Buddha. From the top to foot, the plank road has nine turns, thus it’s called Nine Bends Plank Road (Jiuqu Zhandao, 九曲栈道). The widest park of the road is 1.45m and the narrowest part is only 0.6m, and there are 217 stone steps in total. The road starts from the Buddha head, and tourists can reach to the Buddha feet with the road.

Lingyun Temple is located next to the Giant Buddha (traveler can get to the Buddha head by crossing Lingyun temple), and thus it’s also called Giant Buddha Temple. Built from early Tang Dynasty (618 ~ 907), Lingyun Temple has a history over 1400 years and it’s built before the construction of the Giant Buddha. However, the present Lingyun Temple is not the original temple for it’s rebuilt in Qing Dynasty (1644 ~ 1912) after most of the temple was destructed in late Ming Dynasty (1368 ~ 1644) in a war. The whole temple is composed of Tianwang Hall, Daxiong Hall and Depository of Buddhist Sutras, which form a quadrangle courtyard. Travelers will climb long stairs to get to Lingyun Temple, please wear comfortable shoes.

Wuyou Temple is located on Wuyou Mountain and was built in Tang Dyansty. After getting down to the Buddha feet through Nine Bends Plank Road, keep walking to the left of the Giant Buddha and travelers can reach to Wuyou Temple. The temple has seven halls, which are surrounded by bamboo and wintersweet. Comparing with the crowded Lingyun Temple, Wuyou Temple is more tranquil and quiet. Not many visitors here and the air quality is very good. It’s a great place to relax and wash your lungs with the fresh air. 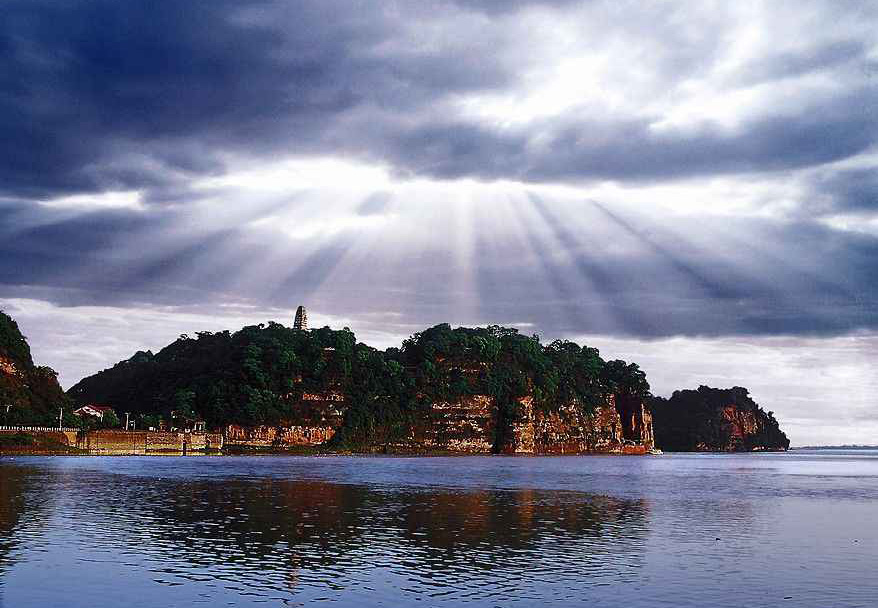 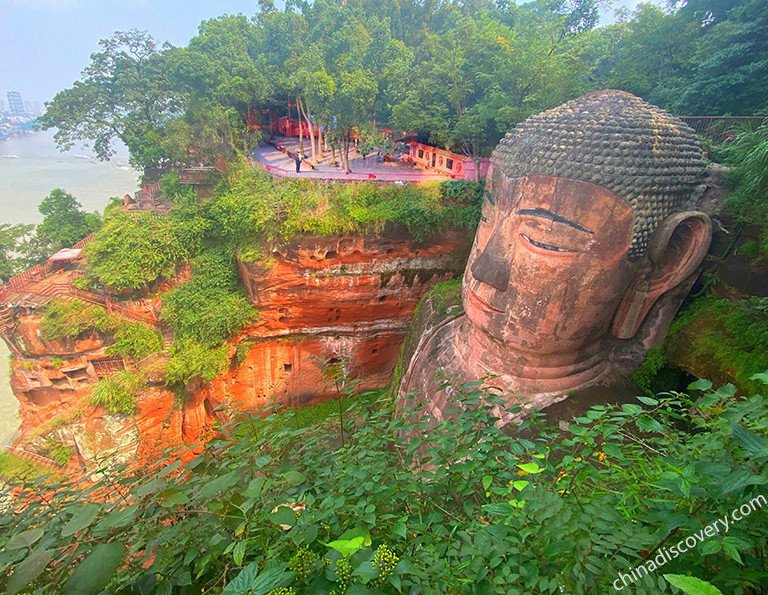 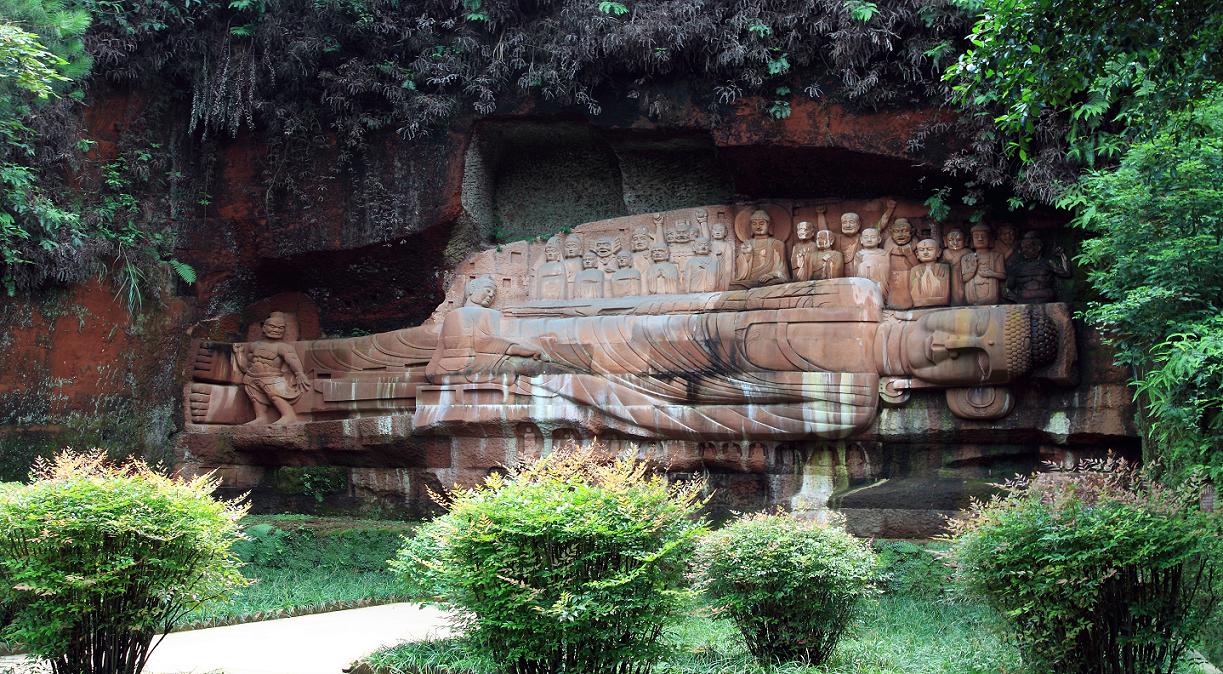 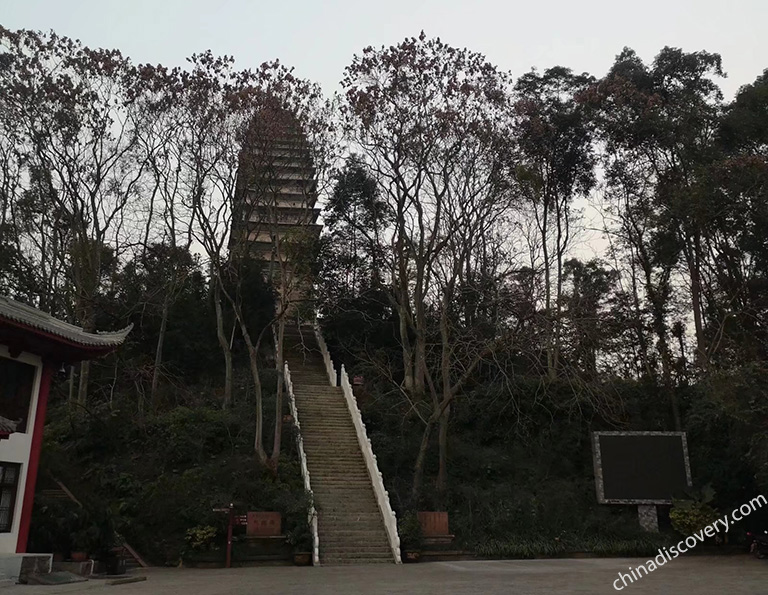 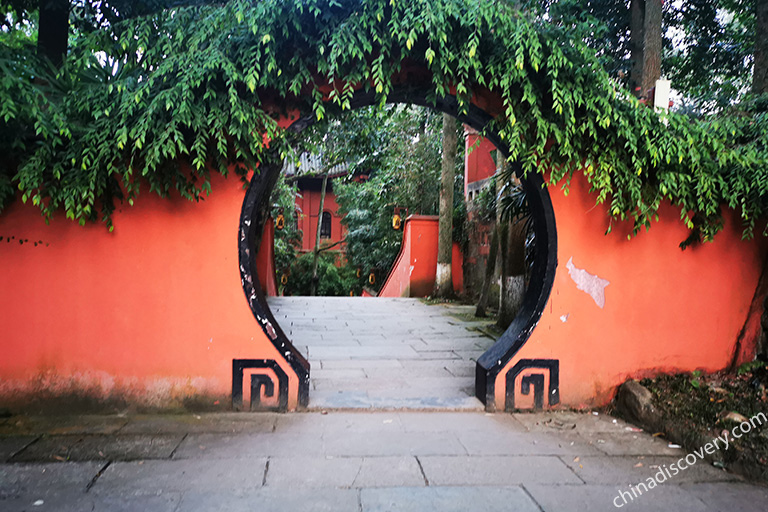 Leshan Giant Buddha is located at the east side of Minjiang River, facing the city center across the river. There is no airport in Leshan, and most travelers will get to Leshan from Chengdu.

How to get to Leshan Giant Buddha from Chengdu

Notice: Leshan city is rather small, so take taxi to get around is a good choice. 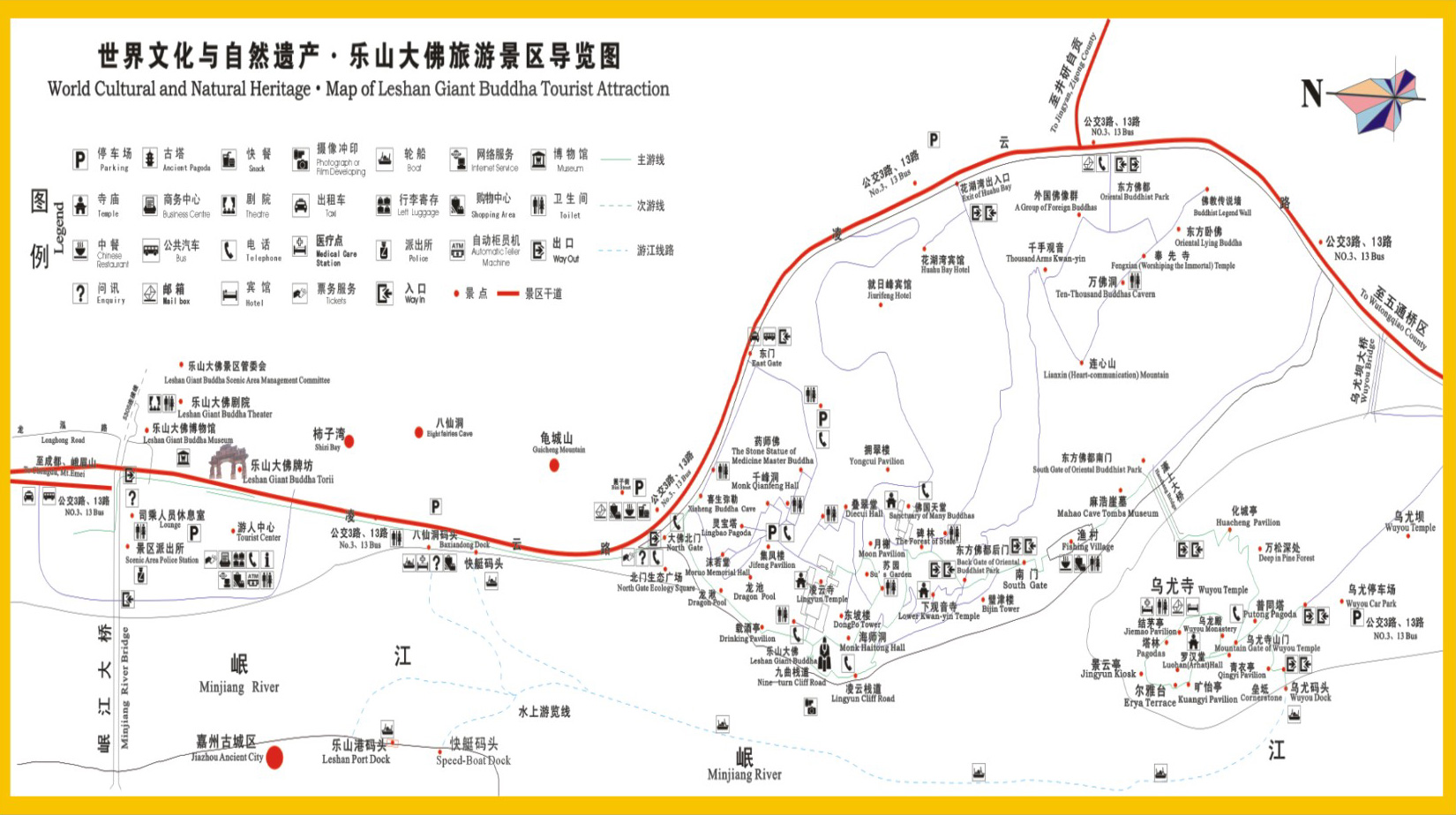 There are two ways to see the Giant Buddha. One is climbing on the mountain and watching the Buddha from a very close distance. In this way, traveler will enter into the scenic area, and get to the Buddha feet through Nine Bends Plank Road.

If you don’t want to climb on the mountain, or want to see the panoramic view of the Buddha, travelers can take boat to see the Giant Buddha. There are two ways to take boat.

Another way is taking steamship or speedboat and they will drive to the front of the Buddha, and travelers can enjoy the panoramic view from a very close distance. There are two piers where can take the steamship and speedboat. One is Baxiandong Pier which is next to the scenic area and travelers can get to it by Bus No.3, and get off at Baxiandong stop, the last stop of Leshan Giant Buddha scenic spot. Another is Leshangang Pier, which is located across the river facing the Giant Buddha. The ticket for steamship is ¥50/person, speedboat is ¥70/person. The cruising time is about 30 minutes, thus, we only recommend this way for those who are short in time or who prefer a very easy trip.

Mount Emei and Leshan Giant Buddha are together listed as World Heritage Site by UESCO. They are both famous for Chinese Buddhist culture and great landscape. You are strongly recommended to travel two sites together. Besides, Mount Emei is only about 30mins' driving from Leshan Giant Buddha. Generally speaking, you can go to Leshan from Chengdu (about 2hrs' driving), and the Giant Buddha first, then transfer to Emeishan City or the foot area of Mount Emei for accommodation. Have a day tour to the top of Mount Emei - Golden Summit, then descend the mountain, and drive or take a high speed train back to Chengdu.

It’s strongly recommended to avoid the golden weeks in China, including Spring Festival, May 1st to May 7th and October 1st to October 7th. During these times, the scenic spot is crowded with domestic tourists, and travelers usually will have to queue for hours to get to the Buddha feet.

Leshan’s local snacks are very famous and delicious, thus, it’s strongly recommended to taste the local food if you have enough time. Just outside of the scenic spot, there is a 500m pseudo-classic street called Jiading Fang, and tourists can find all kinds of local snacks and local specialties in here. Jiading Fang also has many tea house and bars and it’s a good place to take a rest. For those who have more time or will stay overnight in Leshan, it’s strongly recommended to search delicious local food in the city center, like Zhanggongqiao Snack Street (张公桥), Fujie (府街) and People’s Park (人民公园). Jellied Bean Curd, Malatang, Leshan barbecue and Qiaojiao Beef are all good choices.

In the entrance of Leshan Giant Buddha Scenic Area, travelers can find both Chinese and English tour guide. Normally, the price for one tour group is about ¥100.

Daniel Woods
Citation Questions
I am doing a research paper for my Religions of The World class on religious art work (including sculptures) and have used your site for some of my research and am needing the Author of this article "Leshan Giant Buddha" the publisher, and the date it was published. If you could provide that for me I would be ever so thankful!
2017-11-07 04:22
Hi Daniel,

Thanks for your message. The author of this article is Daisy (China Discovery). And the published date is 29-12-2016.