The Jokhang Temple is the holiest temple in Tibet, housing the life-size image of Buddha Jowa Sakyamuni. The outstanding architecture style and devoted pilgrimage are the best highlights of this 1300-year-old monastery.

Not being the largest or the oldest Tibetan monastery, but Jokhang Temple is the most revered and intensely spiritual sacred monastery in Tibet because of its important role in the development of Buddhism in Tibet. More importantly, the Jokhang Temple houses the one of a kind treasure of world Buddhism - the life-size image of 12-year-old Jowa Sakyamuni which has become the most revered idol in whole Tibetan region. At the same time, the Jokhang Temple is more than 1,300 years old now while some other famous monasteries, such as Drepung Monastery, Tashilhunpo Monastery, Ganden Monastery are only around 600 years old. As the spiritual center of Tibetan Buddhism, constant swarms of pilgrims from different parts of Tibet come to Jokhang, and prostrate outside the temple to the Buddha.

In 2000, the Jokhang was included in the UNESCO World Heritage sites as an extension to the Potala Palace. 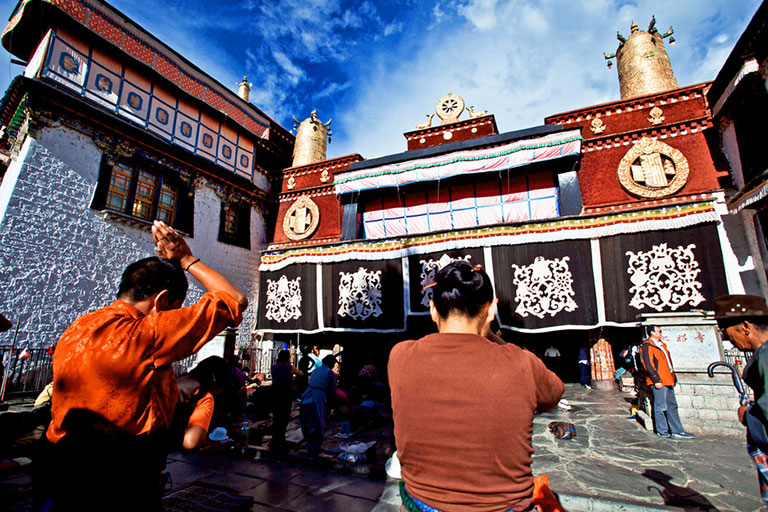 There is a saying that "Jokhang Temple created Lhasa". The present name Lhasa is evolved from the original name of Jokhang Temple – Rasa. In addition, the Jokhang Temple is one of the earliest building of Lhasa city.

To create good neighborhood relationship with Nepal and Tang Empire, the king of Tubo Kingdom Songtsan Gampo firstly married Tritsun Princess from Nepal, and then got another wife who is known as Wencheng Princess of Tang Dynasty. Both two princesses brought a life-size image of Buddha to Tubo as dowries. The image of 8-year-old Buddha, now kept in Ramoche Monastery, belonged to the princess of Nepal, while the image of 12-year-old Buddha was brought to Tubo by the princess of Tang, and now is kept in Jokhang Temple.

The construction of Jokhang Temple was originally launched by the great king Songtsan Gampo of Tubo Kingdom, and completed in 652. It is said that thousands of goats (Ra in ancient Tibetan) were driven to carries earth (Sa in ancient Tibetan) for the construction. This was how the first name Rasa originated. Since the construction, many Buddhists came to worship Buddha in the Jokhang Temple. During that period, the local religion Bon was the dominated belief in Tibet. But the influence of Tibetan Buddhism became stronger and stronger.

The development of Tibetan Buddhism was not smooth. The biggest enemy was the local traditional Bon religion which had a lot of followers among the noble and rulers. During the reign of King Tresang Detsan (757-797), the powerful minister Marshang Zongbayi was a devoted follower of Bon religion. He objected to the Buddhism, and ordered to destroy Buddhist temples. The Jokhang Temple wasn’t spared by the followers of Bon. To protect from the destruction, the image of Sakyamuni Buddha was buried under the ground of Jokhang Temple. The Anti-Buddhism activities didn’t end until the early 10th century. And the temple unfortunately had been the horse stables for long time.

The famous Bengal Buddhist master Atisha made a great contribution to the spreading of Buddhism in Tibet. He taught Buddhism in Jokhang Temple in 1049.

The Jokhang Temple became more and more famous as the development of Buddhism in Tibet. Around the 14th century, there used to be a statement that the image of 12-year-old Buddha in Jokhang Temple was originally housed in the Bodh Gaya Temple in India as the Vajrasana, which made Jokhang more and more revered. So followers also called Jokhang Temple as the "Vajrasana of Tibet".

In 1409, the Buddhist master and founder of Gelug Sect of Buddhism (Yellow Hat) taught Buddhism, and created an influential prayer assembly which is still held annually in Jokhang Temple.

Though there are many sects of Tibetan Buddhism, such as Gelug, Sakya, Kagyu, etc, the Jokhang Temple is their corporate holy temple. 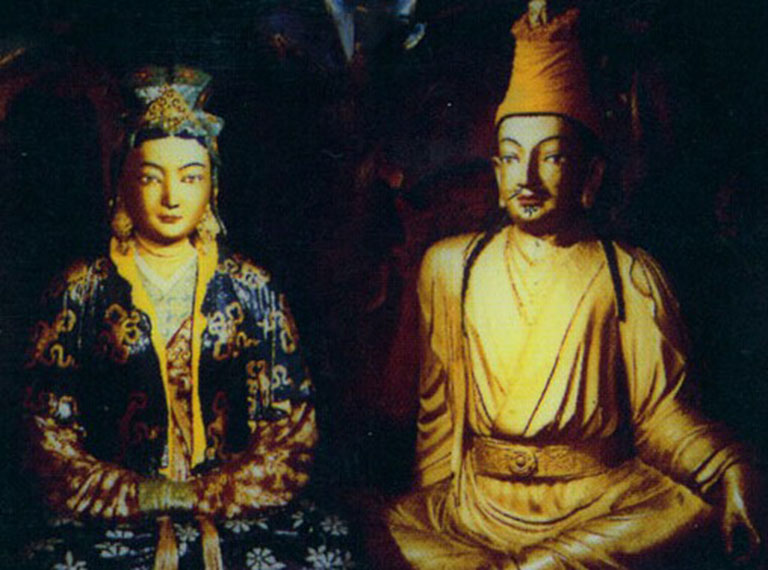 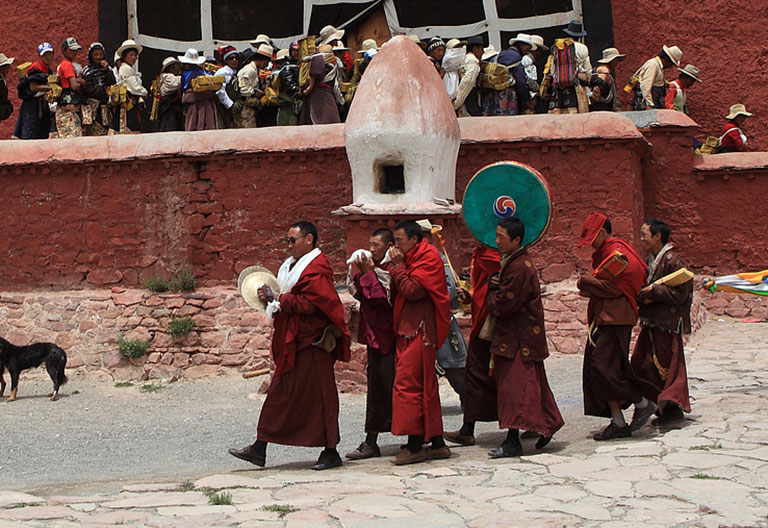 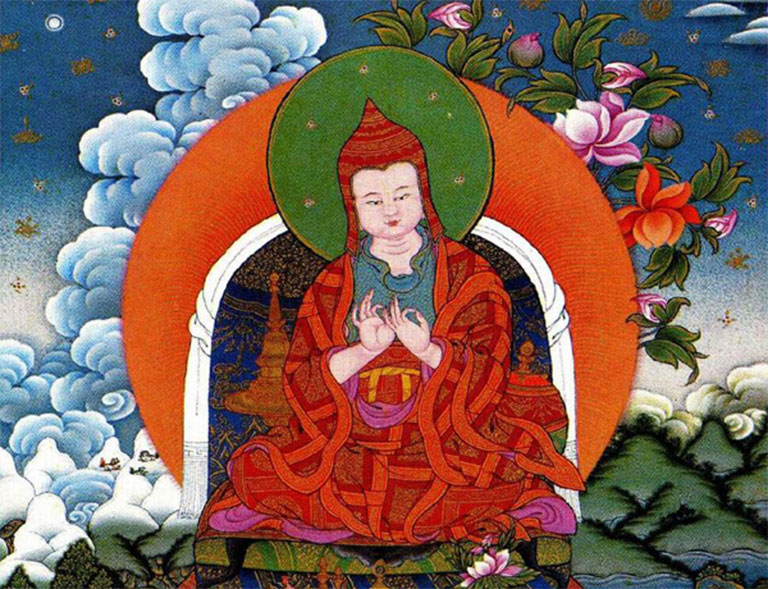 The structure of Jokhang Temple was designed according to the Mandala, the famous model of ideal universe in Buddhism theories. Having gone through more than 13 centuries, it embodies the historical changes and the development of Buddhism in Tibet. The architecture styles of Tibetan, Chinese, Nepal and India mix together in a temple.

The Jokhang Temple, covering an area of 25000 square meters (6.2 acres), is much smaller compared to Drepung and Sera Monastery. The temple sits on the eastern Barkhor Street, facing the west. In front of the entrance is a closed house which is full of butter lamp. Enter the entrance, through a path of which has wall paintings describing the ancient outlook of Potala, and the scene of building the Jokhang Temple. Travelers will then get to ground yard which is used as stage for Buddhist ceremonies. A long corridor of Buddhism paintings surrounds the yard. From the yard, travelers can climb steps, via the second floor to the stage of Golden Roof from which one can get full view of Potala Palace.

Explore deeper into the monastery, travelers will get to the main hall which was built nearly 1400 years ago. Two huge statues are placed at both sides of Hall. The left statue is the master Padmasambhava, the founder of Vajrayana of Tibet. The right statue is the Future Buddha. Visiting by the clockwise, the first chapel serves the Tsongkhapa and his 8 students two of which were the first Dalai Lama and first Panche Lama. A small white pagoda sits at the corner of west and north. At the south of hall, there are chapels for the Medicine Guru Buddha, and a chapel for the master of Kagyu sect – Milarepa. The statue of Guanyin Boddhisattva is also worshipped in a small chapel. On the eastern hall houses the founder of Jokhang Temple - Songtsan Gampo and his two wives Tritsun and Wencheng. 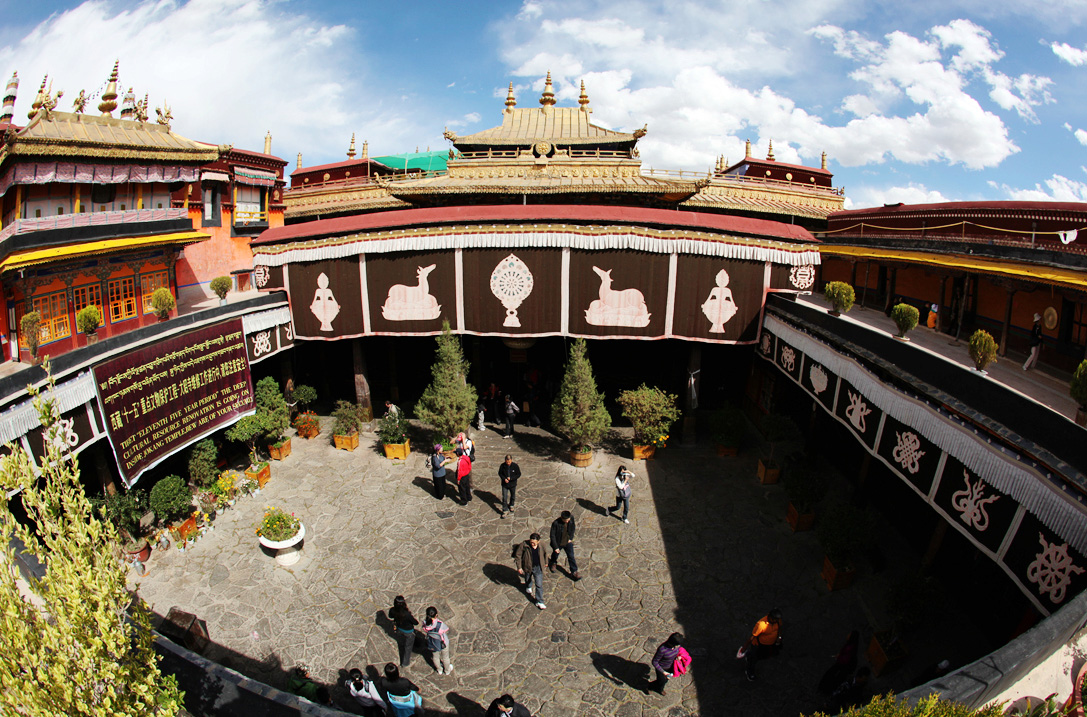 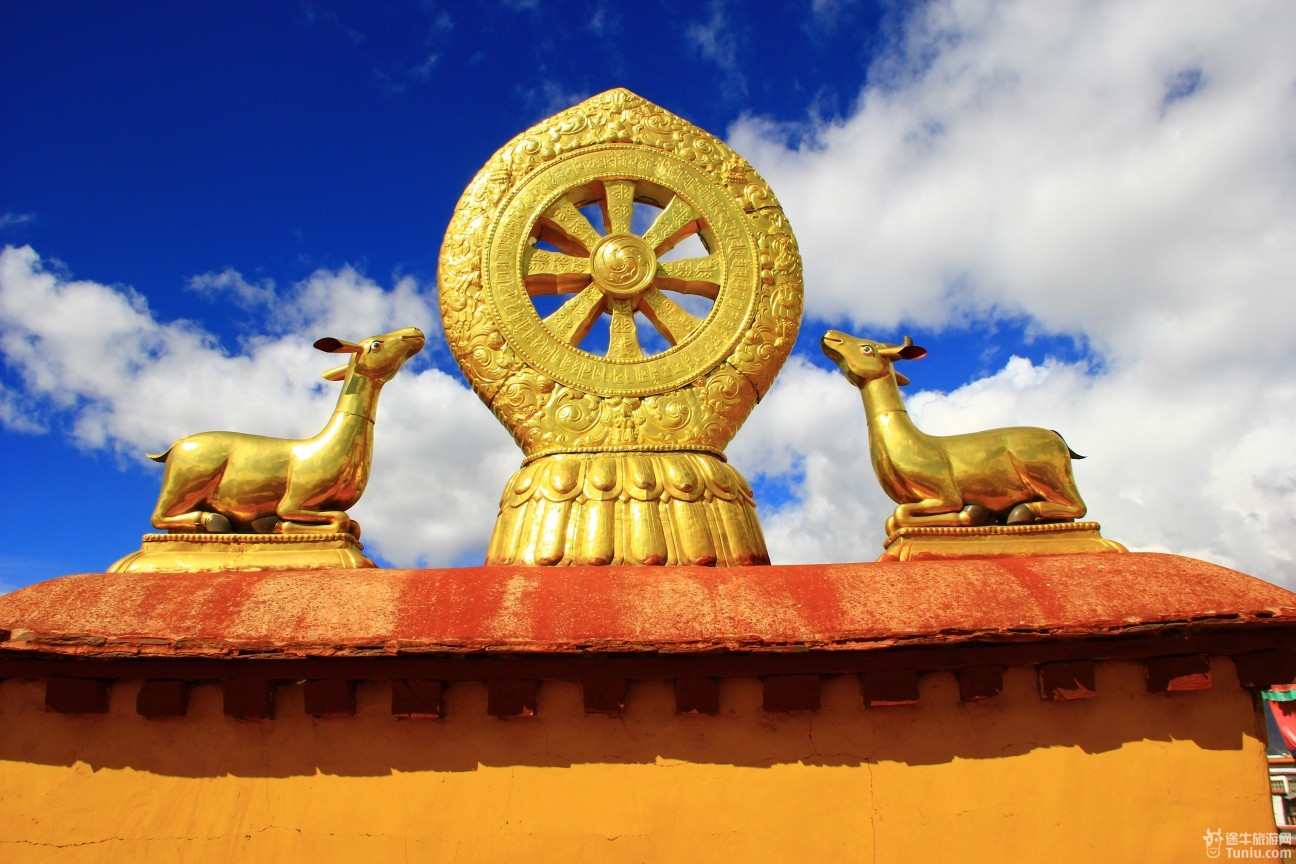 The image of Sakyamuni Buddha, brought to Tibet by Wencheng Prince, is the most important relic of Jokhang Temple which is also the main reason why the temple attract hundreds of thousands of pilgrims to worship. It is made of gilded bronze, 1.5 meters in height, and represents the Buddha when he was 12 years old as prince. It is said that only three life-size images was made under the instruction of wet nurse of Sakyamuni Buddha. From the statue one can imagine the real appearance of Buddha. The Buddha wears a bejeweled crown, and dress superb and luxury clothes. 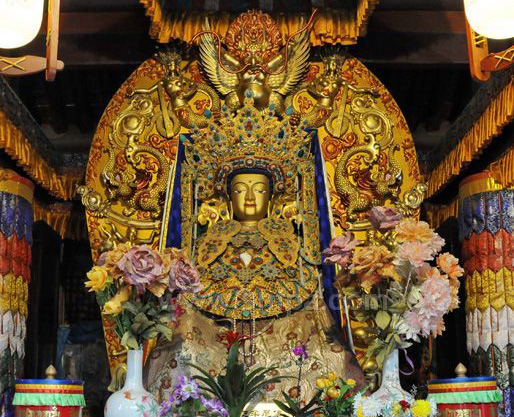 The Image of Sakyamuni Buddha

Where is the Jokhang Temple located

Jokhang Temple is located on the Barkhor Street, central of the old town which still keeps the traditional Tibetan architectural style. While not very far from the west is the newly developed new city urban with modern buildings. The Jokhang Temple area is perfect place for walking and exploring local Tibetan culture. Many sites are within walking distance from Jokhang Temple, including Potala Palace, Ramoche Temple, etc.

The Barkhor Street is a many-side-square region enclosing the Jokhang Temple. For pilgrims, it is a sacred Kora path to circumambulate the Jokhang Temple which usually takes about 30 minutes to walk around. While for tourists, it is a good place to explore local culture, and buy local articles. The entrance of Jokhang is located on the western street. 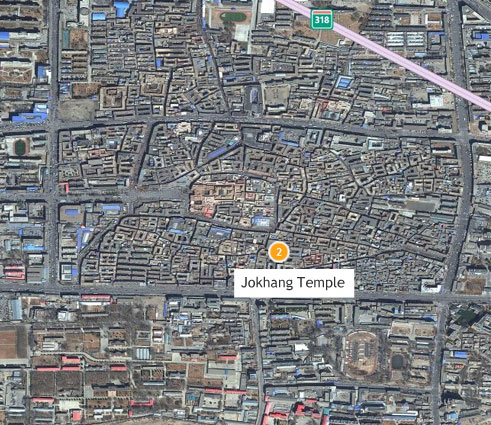 Summer and autumn (May to October) are best seasons to travel in Lhasa when is warm, neither too hot nor cold. If you come in the spring (February to April), you have chance to witness many interesting festivals, including the Tibetan New Year.

Jokhang Temple is a religious site, so travelers should dress modestly, behave with good manner. Don’t talk too loud, don’t smoke inside the temple. If you want to take photos of monks or pilgrims, you’d better get permission first. And photography is forbidden in the chapels.