Drepung Monastery used to be the largest monastery and most powerful monastey in Tibet. It is situated in the western suburb of Lhasa city. As the mother monastery of Dalai Lama, it also played an important role in the development of Tibetan history and Buddhism. Today, this monastery is still as one of the holiest monastery for Buddhist and an influential Buddhist College for monks to study the classic Tibetan Buddhism.

Opening Hours: Half a day

With a long history of 600 years and special status, Drepung Monastery is one of Three Greatest Monasteries in Lhasa and remains the premier place among the three. Seen from far, you will find a group of grand white buildings occupying a large area just like a huge heap of rice. That’s reason why this monastery is called Drepung which means “collecting rice” in Tibetan language. Drepung Monastery is embraced on three sides by mountains. On its south side is a sloping fields covered by scrub brushes. The constructions in the Drepung Monastery are built in a gradually descending position.

In 1409, Gelugpa Sect of Tibetan Buddhism came in to being with Tsongkhapa’s elaboration. Because of the fast growing number of believers and followers, Jamyang Choge Tashi Palde (one of Tsongkhapa’s disciples), namely the second Dalai Lama founded Drepung Monastery in 1416. In 1464, a lot of chapels and temple were built for followers to impart Buddhist wisdom. The second Dalai Lama also lived in and handled with official works here. In 1578, the khan of Mongolia conferred Sonam Gyatso as Dalai. In 1642, the fifth Dalai Lama established government and moved to Potala Palace. However, Drepung Monastery preserved and kept its far-reaching influence on Gelugpa.

The Main Assembly Hall (错钦大殿), also called Tsochin is the principal construction located in the center of Drepung Monastery. Crossing the cobbled square and walking up the 17 wide steps, you will see the large-scale Main Assemble Hall with an area of 4,500 square meters. The huge interior is draped with beautiful Thangkas and supported by 181 columns.

The back-room chapel is Three Buddha’s Hall housing statues of Past Buddha, Current Buddha and Future Buddha with their two disciples. Shakyamuni and his disciples are enshrined in the central three bronze niches with featured decoration. The walls and pillars in the two sides of the chapel are lined with eight standing Bodhisattvas who looks elegant and charming. On the left side of Tree Buddha’s Hall sits a gigantic statue of Jamba at his 12-year-old, body on the first floor and head stretching to the second floor. This statue is in well-designed proportion and delicate characterization, making people feel warm. The highlight in Main Assembly Hall is the Jamba Hall housing the bronze statue of Jamba at his 8-year-old. This is a marvelous statue and you can even read a bit of childishness from his face. It is said that even one glance of him helps you to vanish all your sufferings and avoid falling into the hell.

The Main Assembly Hall was the administrative center of Drepung Monastery in ancient times. The first executive official, with two disciplinarians taking an iron rod, enjoys supreme power and controls the lives of monks and people living in these manors. During the period of Smon-lam chen-mo (a meeting lasting for 21 days), they will dominate Lhasa and make people shake with fear. They would knock the ground by their iron rods at every step, leaving a sonorous.

Dratsang is not only the college but also an administrative organization. The buildings in Dratsang include the Main Sutra Hall and different kinds of chapels. There has been seven Dratsangs in the early days and then merged into four Dratsangs according to the learning subjects and native places of the monks, including Loseling College, Gomang College, Deyang College and Ngagpa College.

Loseling College (洛色林扎仓) is the largest Dratsang in Drepung Monastery which occupies 1,860 square meters. The population of Loseling College ranks the first in Drepung and most of them come from Kam District and Yunnan Province. The Main Sutra Hall is supported by 102 columns and arranged with bookshelves full of various sutras. In the central is a large statue of Jambaand a self-arisen stone painting of Nechung oracle on the opposite wall. The decoration in the Main Hall as exquisite as Tsochin Hall will give you shot. You can also see an altar embellished with the statue of the fifth, seventh and eighth Dalai Lamas, Tsongkhapa and previous abbots.

Gomang College (果芒扎仓) is the second-largest one which shares the same layout as Loseling College. You can say an array of images of Jamba, the seventh Dalai Lama and Tsepame. Women are not permitted into this chapel.

Deyang College (德央扎仓) is the smallest college with a proportion of 952 square meters. The Main Sutra Hall is supported by 62 columns. The posterior part are chapels as well, you can enjoy the statues of Buddha.

Ngagpa College (阿巴扎仓) is the Tantra Institute of Drepung Monastery. The chapel is dedicated to stubborn Dorje Jigje, a Tantric Meditational deity who serves as an opponent to the forces of impermanence.

Ganden Podrang (甘丹颇章) was stablished in 1530 by the second Dalai Lama. The 3 successive Dalai Lamas lived here and exercised their political and religious control over central Tibet, so it had been the center of politics and authority for a long time. The second, third and fourth Dalai Lamas are also entombed here. The whole construction can be divided into three parts from the flat surface. The front part is a courtyard. Passing through the courtyard and climbing up to 27 steps, you can see a two-story building with corridors and residents. The posterior part is the main building of Ganden Podrang owning 3 stories. The second floor is the site where Dalai Lamas handled with the religious and political affairs. They accommodated in the third floor.

As the largest monastery in Tibet, Drepung Monastery reasonably has large amounts of precious collection. There is countless chinaware and various Thangkas, bronze statues of Buddha or Bodhisattva or other deities. The rarest is the 108 Thangka of Tripitaka which are collected in 54 tailor-made wooden cases. Another collection worth mentioning is the Manjusri Bronze Mirror which served as a gift to the fifth Dalai Lama from Shunzhi Emperor in Qing Dynasty. It is 1.29 m high. Both sides are carved a sitting statue of Manjusri Bodhisattva. The mirror base is made by rare sander wood and ornamented with fine patterns. The armors exhibited in the Main Assembly Hall are well preserved and did great contribution to researching on the history of Tibetan Culture and military.

Shoton Festival is most significant religious festival in Lhasa In the ancient times when the Buddhism prevailed in India, it was regulated that all the monks could not go out in case to avoid stepping on insects. That’s how Shoton Festival formed and it was introduced to Tibet. During the period the Shoton Festival, there will be a Buddha Exhibition. The huge Thangka of Shakyamuni with over 500 year’s history has always been collected in the monastery and only exhibited during Shoton Festival. This great event attracts the followers and tourists from different places. 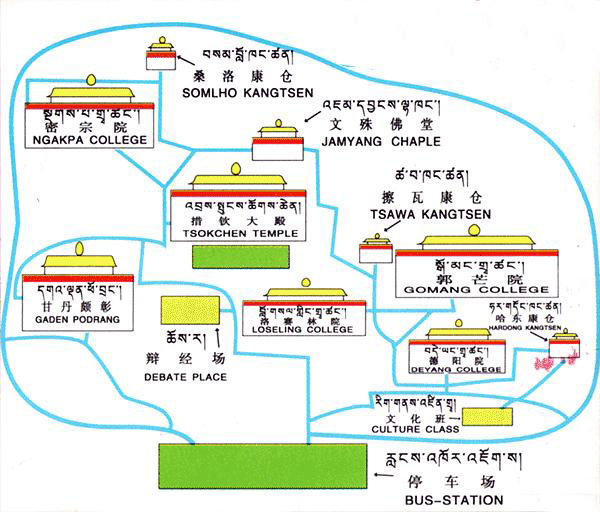 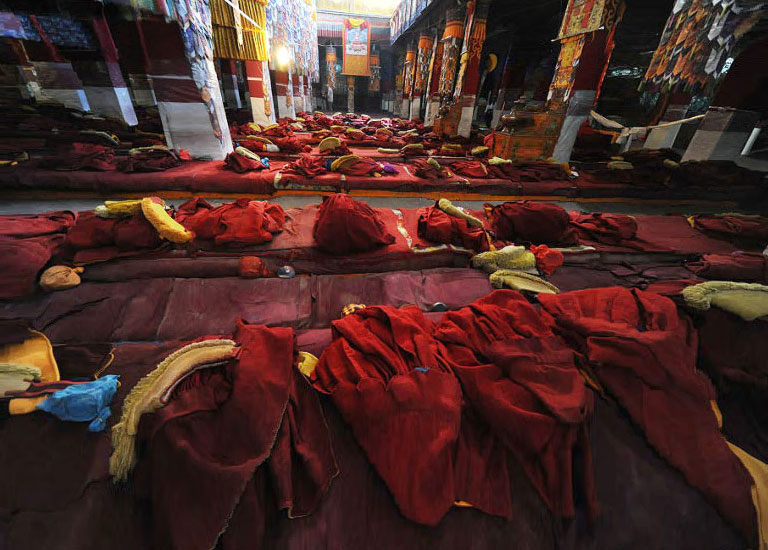 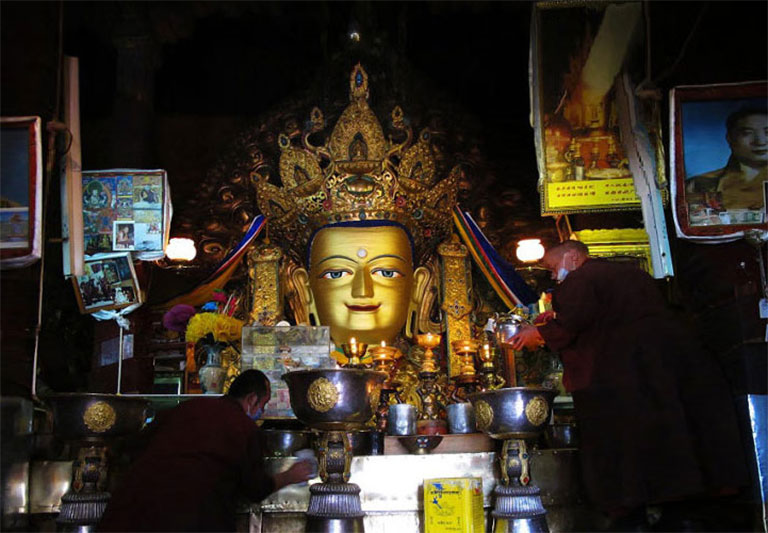 Statue of Jamba in His 8 years Old 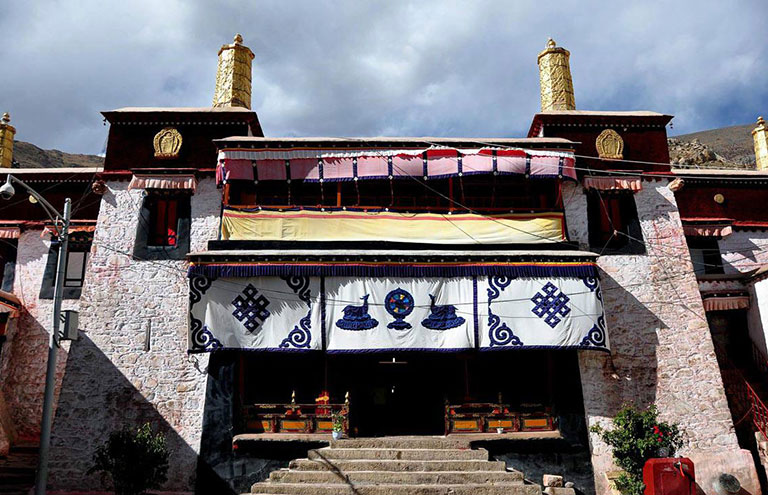 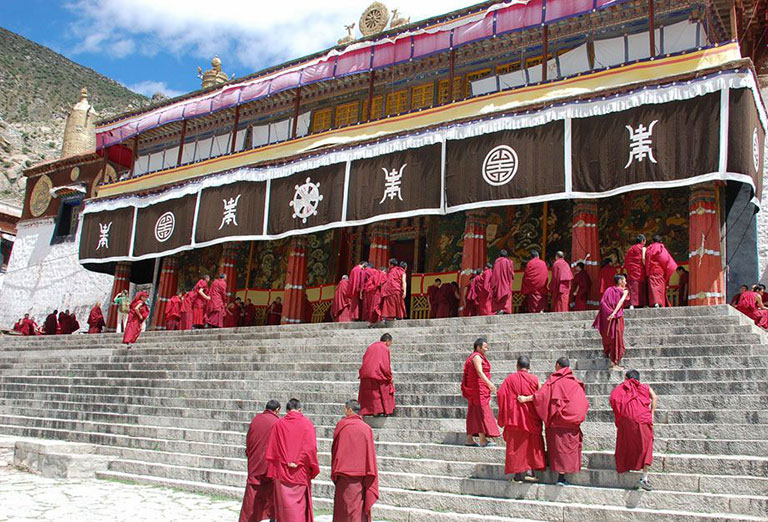 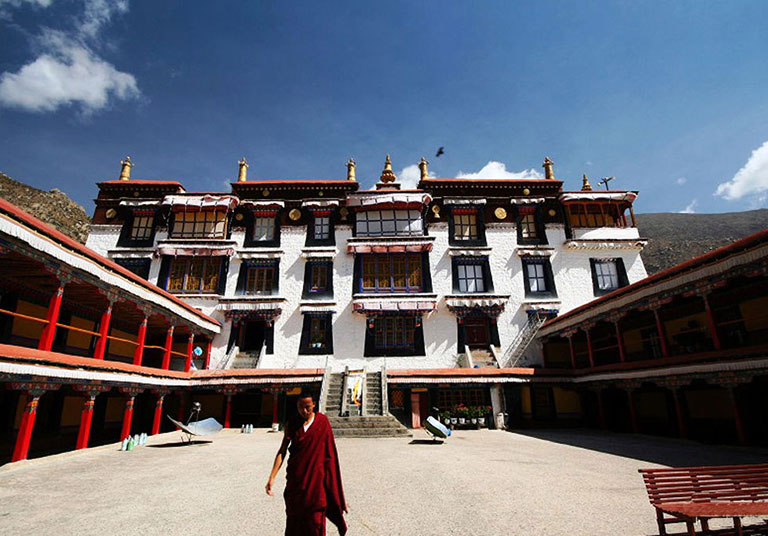 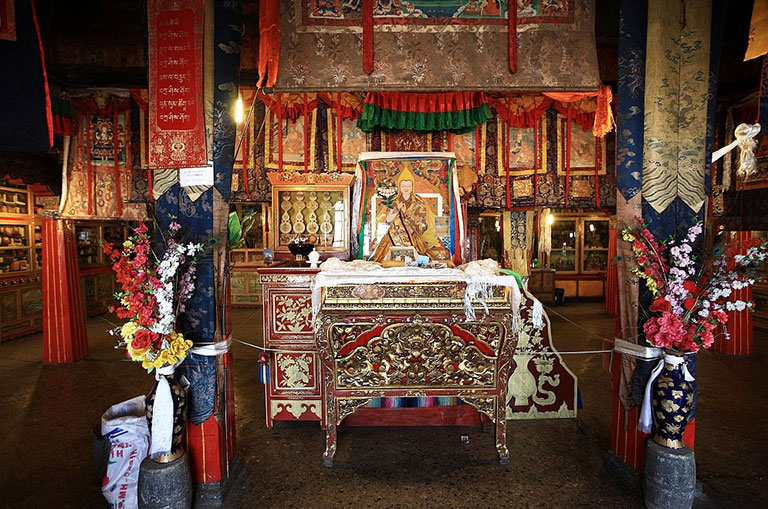 The Throne of Former Dalai Lamas 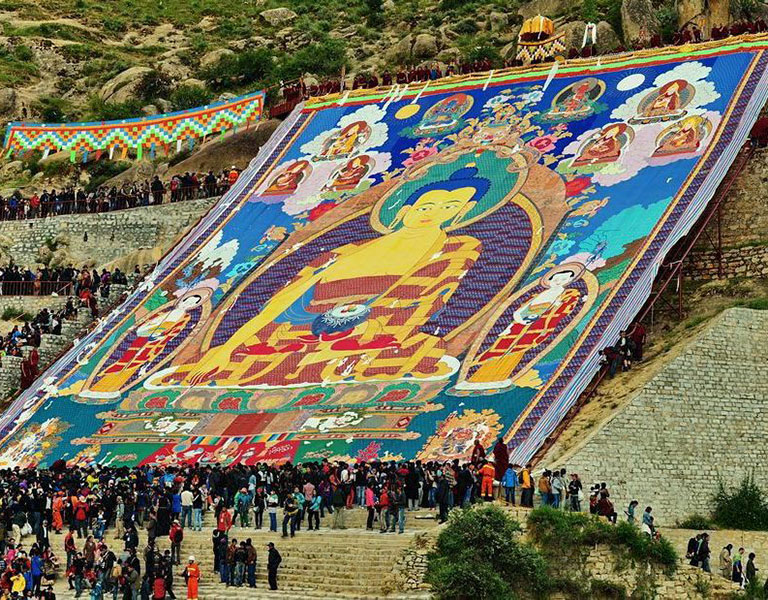 Drepung Monastery is situated at the foot of Mount Gephel and 5 km from the western suburb of Lhasa.

Taking a taxi is more recommended and the whole journey may cost about 30 RMB. No. 25 Bus is also available and you can get to the foot of Mount Gephel within 30 minutes and then you need to walk about 35 minutes to the entrance. The road is a rugged mountain path, so you might be extremely tired with an addition high altitude of above 3600 m.

If you want to get rid of hustle of public transportation and troublesome navigation, you can book a private tour package which covers sightseeing, dining and transfer from us. Our knowledgeable local tour guide and skilled driver will escort you to Drepung Monastery with speed and convenience, and take care of all the details. You just need to focus on sightseeing. 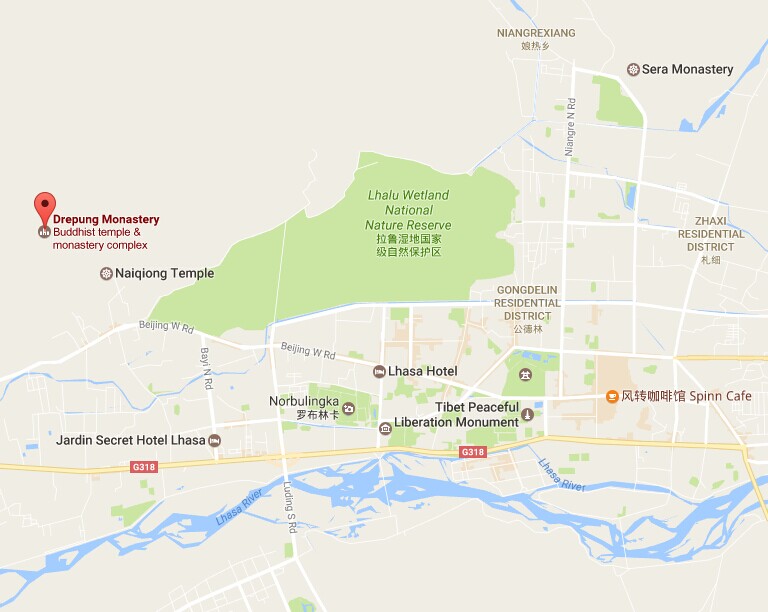