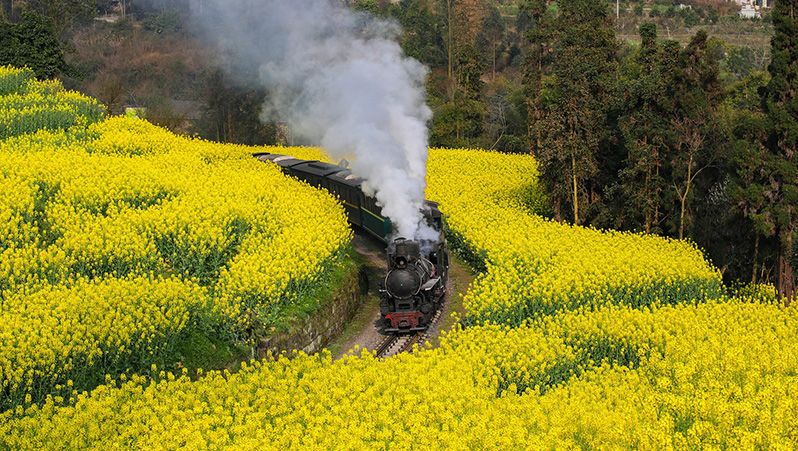 The Jiayang Steam Train in Qianwei County, Leshan, is currently the only narrow-gauge coal-fired steam train running in the world, which is praised as “A Living Fossil of the 18th Century Industrial Revolution ”. Passing through beautiful sea of Spring canola flowers and Summer sunflowers in countryside, it is also one of the Best Sightseeing and Photograph Sites in Sichuan.

Recommended Visiting Time: about half a day

Jiayang Steam Train running on the 19.8-km-long Bajiaogou-Shixi Coal Railway (芭蕉沟-石溪铁路) in west Qianwei County suburb, south Leshan City, is the only passenger steam train still in operation in China and world. Still serving local transportation during the era of super-fast high speed train, the traditional steam train is even more famous and unique, because its continue using wonderfully shows how Chinese engineers overcome rail technical difficulties in precipitous areas and the riding experience itself brings tourists back to old days and unfolds a tranquil countryside picture along the rail.

In 1938, Jiayang Coal Mine, the first Sino-british joint venture coal mine was established in Bajiaogou (Bajiao Valley), east of Qianwei County to support the front-line war in Chongqing, southwest China. With a length of about 20km and 600-mm-wide track, Bajiaogou-Shixi Coal Railway later was constructed from Huangcunjing, Bajiaogou to Minjiang River, Shixi Town to deliver the coal in 1959. In later 20th century, the coal way had several renovation and gauge-broaden work. To protect the engineering heritage, the officials declared the Jiayang Steam Train and Bajiagou-Shixi Coal Railway a national cultural relic protection unit and a symbol of China-UK friendship, the Huangcun Pit a listed National Mine Park.

Located about 20km northwest of Qianwei County and 70km south of Leshan Giant Buddha and about 200km (3 hours' drive) from Chengdu in the north, Jiayang Steam Train (Jiayang Narrow-Gauge Steam Train) marching on the age-old Bajiaogou-Shixi Coal Railway (length: 19.84km/12.32mi) is a rarely seen steam train in the world running on a narrow gauge track of only 762mm, nearly half short than the national standard. The train is domestic imitation of ZM16-4 of Poland, which still keeps original steam coal, manual driving, shovel, whistle, weaving signal flags and other old operation. After opening for more than 70 years, now it remains an important local transport vehicle in steep mountain regions but more notable for the 2-hour sightseeing train journey passing the golden sea of canola and sunflowers, wild countryside field and ancient dwellings, which meanwhile vividly demonstrates great wisdom and life change from Industrial Revolution. Former Jiayang Coal Mine in 1940s After departure from Yuejin Station, Jiayang Steam Train starts rising journey to higher terrain. When it comes to Mifengyan Station where it can not turn normally, railway here has been innovated a “人” type to help the train switchback and zigzag up steep mountain areas (a special engineering creation by Zhan Tianyou, world-famous Father of Chinese Railway). You surely will be confused when your train with the coal water tank in front changes to a opposite direction after turning around. Actually, the train just realize a turning and moves on to Bagou Station on another track.

Scenery between Mifengyan Station and Caiziba Station is much more beautiful than other sections on the Bajiaogou Shixi Coal Way, and the layers of Chuannan terraced fields with golden rape flowers blossom and green leaves in Duanjiawan is the most beautiful sights when taking Jiayang Steam Train in March, early Spring.

Mifengyan Station is the midpoint of Bajiaogou-Shixi Coal Railway. The train will stop here for a while, so that all passengers can get off and walk to the nearby observatory to closely catch the best shoots and most picturesque moments when the train drives backward to reappears out of a ocean of flowers. On the observation deck, some vendors sells local snacks at reasonable price for you to kill hunger. Laoyingzui means mouth of eagle in Chinese. The spot gets its name reputedly because the shape of the hills, three peaks looks like a eagle spreading its wings when seen from a distance and the Tunnel No.5 just like the eyes and the mountain is so much like the head. For the tunnel is excavated on cliff rocks, Laoyingzui is widely recognized as the most challenging segment of Bajiaogou-Shixi Coal Railway, another strong proof of brave feat of mankind. The steam train won’t stop here, so tourists on board can only take a quick glance of outside scenery and advance to next station, or walk from Duanjiawan to capture the photo of train coming out of the tunnel.

The Jiayang Steam Train presents unusual scenery at Caiziba Station when it accomplish climbing at a curve within a short radius of merely 70 meters. Don’t miss the nice rape fields outside the window.

Go by two tunnels from Jiaoba Station, the train arrives at Liangshuituo. The Steam Spraying Show is one of the major attractions for taking Jiayang Steam Train. Standing on the hillside observation platform, tourists can see the old steam train slowly comes, along with sprinkling white steam and honking, gives a illusion that as if you have been back to the First Industrial Innovation in 18th century and witnessed the ancient engineering civilization at scene. Lucky enough, some may see a miracle of colorful steam rainbow in a sunny day. Bajiaogou Station (also called Bagou Station), namely the Bajiaogou Ancient Town, is the terminus of Jiayang Steam Train. It was Jiangyang’s mine area during the 30s~80s in the last century and a witness of Industrial Revolution, China’s Anti-Japanese War and War of Liberation. The town at present is the best accommodation and dining area for steam train travelers, where also has plenty of old style sites to visit, including the Jiayang National Mining Park (free entry), Chinese Su Style and Britishstyle residences, auditorium, square, street and some quiet natural scenery.

Underground Mine Exploration in Huangcun Pit

After getting off at Bajiaogou Station, tourists can take a local rail bus shuttle from Bajiaogou Ancient Town to Huangcun Pit to experience the real miner work 100-meter deep underground. Huangcun Pit is the first mine opened by Jiayang after liberation, and nowadays the No.1 pit has been reconstructed as the only real coal mine in China serving as a tourist spot for better understanding of mine and modern thin coal mining in southern China. There are two different kinds of Jiayang Steam Trains running, one is the sightseeing trains for tourists and the other is the regular passenger train.

Special sightseeing carriages (length: 8m, width: 2.1m) with narrow wooden seats, glass windows, air-conditioner and audio system are offered on the tourist trains. Every day, there are 2 sightseeing trains departing from Yuejin Station, passing Mifengyan, Liangshuituo, Huangcun Pit and other scenic sites, and stoping at Bajiaogou Station. Round-trip train travel takes about 2.5 hours. Some sightseeing trains may be connected on the normal train during non-Chinese national holidays. (Note: One more train (leaving at 13:00) will be increased at weekends and during national public holidays, the trains run at a flexible timetable.) Another type of Jiayang Steam Train is used as local public transportation. The noral carriage (length: 4.5-8m, width: 2m) is much more crowded than sightseeing trains, without seat class ticket and won’t stop for scenic sightseeing. Ticket is cheap to only a few RMB but riding experience is not advised for tourists. Generally, there are three ordinary passenger trains scheduled each day and the journey to and fro needs about 2 hours. Passengers can take the Jiayang Steam Train to physically experience traditional engineering all year round as long as it opens to the public. However, the wide range of rape flowers in early and mid March in Spring and lovely sunflowers in August and September in late Summer and beginning of Autumn appeal to much more visitors than other months. During the two peak seasons, natural sightseeing and special train experience are more recommended and worthwhile. More sightseeing steam trains will be arranged accordingly during the tourist peak seasons. It’s highly recommended to take a morning steam train when air is fresh and you have enough time to take some walk or go to Huangcun Pit coal experience.

Tips: Expect crowds on weekends and public holidays during March, August and September. How to Get to Qianwei Jiayang Steam Train

The starting point of Jiayang Steam Train is located in Bagou Town, Qianwei County, Leshan City, Sichuan. So far, the common way is to get to Qianwei County first and then transfer to the departure station - Yuejin Station to take the Jiayang Steam Train. Chengdu and Leshan are two popular gateway city to travel to Qianwei in southern Leshan City.

By Private Driving: Direct driving from Leshan Giant Buddha to get to Yuejin Station in Qianwei costs around 1 hour 10 minutes to 30 minutes (about 70km).

By Bus: There are bus leaving from Leshan Coach Terminal, Leshan Passenger Transport Central Station to Qianwei County, with a journey of 1.5 hours.

By Train: Leshan Railway Station sends about 5 trains to Qianwei Railway Station per day. It only takes about 17 minutes. Extra transfer from Qianwei Train Station is needed.

For foreign travelers to Qianwei, Leshan, it's requires lots of time and energy looking for the most convenienta and useful way to take Jiayang Steam Train. Travel with China Discovery, you'll be escorted to departure station to take the train by a safe, clean and comfortable private car, and learn more interesting history and local culture from our tour guide, ticket booking, dining and accommodation will also be arranged depending on your needs. 2. Best time for photography is the early and mid March, and the best recommended shooting spot is from Duanjiawan.

3. Don’t walk, lie, rest, bike on the tracks for your safety. Also, do not put personal stuff and rubbish neither.

4. It’s suggested to wear a mask and a hat blocking smoke and ashes of burning coal.

5. Mental prepare that seats on sightseeing train are a little narrow.

Your time on touring Leshan, Chengdu and China is valuable and limited, therefore, it’s very important to plan the itinerary well and get the best and unique essence in Leshan from Chengdu. On the first day, you can visit Chengdu Research Base of Giant Panda Breeding in the morning to see the active Giant Pandas, and visit th UNESCO World Natural & Cultural Heritage - Leshan Giant Buddha siting at the junction of three rivers. You can choose to hike down the path to closely watch China’s Biggest and Tallest Buddha statue and marvel or take panoramic sightseeing by boat. On the second day, you can experience Jiayang Steam Train- the only-surviving steam train burning coal in China, memorize the industrial innovation and make a contrast tour with the modern high speed bullet trains.

China Discovery is an experienced, professional and considerate travel companion based in Chengdu. Travel with us, you can enjoy well-organized tour services in the most convenient way, including the pick-up, local tour guide and drive, thoughtful accommodation, dining and worry-free transportation between each site and the ticket booking, etc. With our help, you can fully focus on the sightseeing journey using the minimum cost of time and energy. According to your itinerary and hobbies, you may choose from our popular Leshan Tours or contact us to customize a special one. 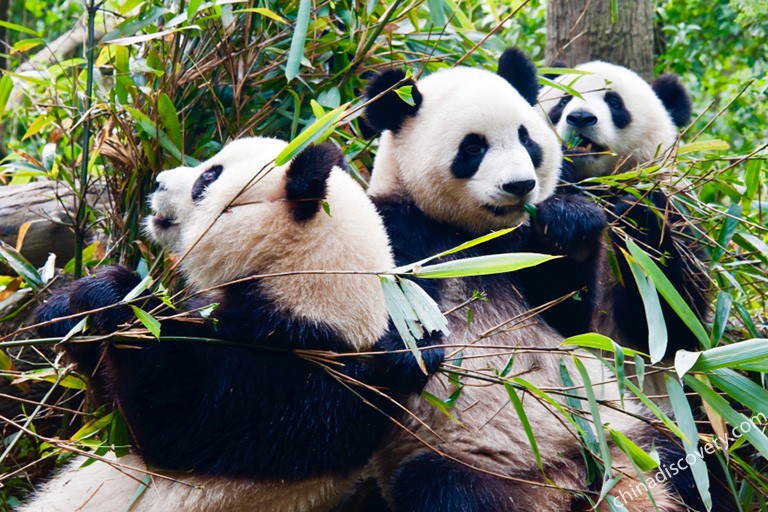 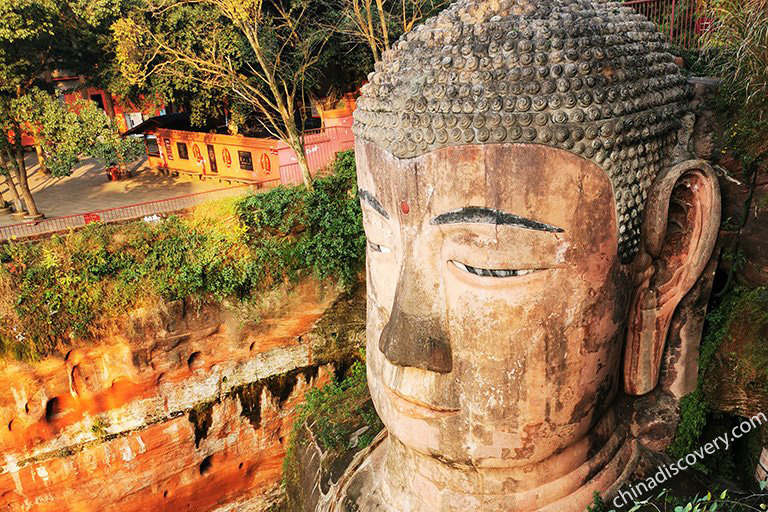 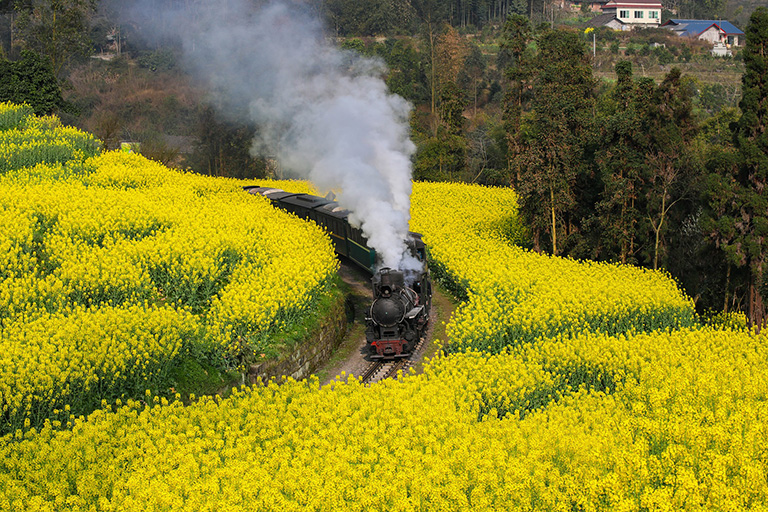