Address: On the Minjiang River at the west of Dujiangyan, Dujiangyan 611830 China

The irrigation system of Dujiangyan is composed with three water projects, there are Yuzui, Feishayan and Baopingkou.

Feishyan: Feishayan is a flood discharge project, and it is the key to protect Chengdu Plain from flood. It mainly works as flood discharge, desilting and regulating water flow. When the water flow has exceeded the upper limit of Baopingkou, the excess water will overflow from Feishayan.

Baopingkou: Baopingkou is a diversion project, which works as a control valve. It can control the water flow of Inner River automatically. The natural scenery of Baopingkou is stunning, and it’s a famous attraction in ancient time.

Erwang Temple is located at the hillside on the right bank of Ming River and it’s used to commemorate Li Bing and his son. Now, in the main hall of the temple, there are sculptures of Li Bing and his son, and the stone wall here was inscribed with the water control words passed down from ancient time. Erwang Temple is a combination of temple and garden, and the eastern part is a garden area, while the western part is the temple area. The whole area covers an area of 50,000 m2 while the architecture area is about 10,000 m2. Erwang Temple is also a great observation platform to overlook the panoramic view of the whole Dujiangyan Irrigation System.

Fulong Temple is located in the Lidui Park. It was first built in Jin Dynasty (265 ~ 420) in memory of Fan Changsheng – the leader of Tianshi Taoism. Later, it’s used to commercate Li Bing. There is a stone statue of Li Bing in the front hall, which was excavated from the river in 1974, and the statue was carved in Eastern Han Dynasty (25 ~ 220). The lookout pavilion of Fulong Temple is the best place to overlook the panoramic scenery of Feishayan, Yuzui, Anlan Suspension Bridge, etc.

Yulei Mountain is sitting in the east side of Erwang Temple. Tall and lush ancient trees cover all over the mountain. There is a section of the ancient Great Wall of Ming Dynasty on the mountain. Local people often come here to do morning exercise. On the top of the mountain, there is a pavilion called Yulei Pavilion. It’s a pseudo-classic architecture and it has a great view to observe the whole view of the Dujiang Irrigation System, even the scenery of Dujiangyan City.

Located on Yuzui and crossing the Outer River and Inner River, Anlan Suspension Bridge is reputed as one of the Top Five Bridges in ancient China, and it’s the most typical scenery of Dujiangyan. It was built before Song Dynasty (960 ~ 1279), and today’s Anlan Suspension Bridge was rebuilt in 1974. When you walk on the bridge, the bridge will swing as long as there is someone swings it, and it’s very exciting. It’s also a great place for photography, however, tourists need to take good care of their camera when take a photo on the bridge. 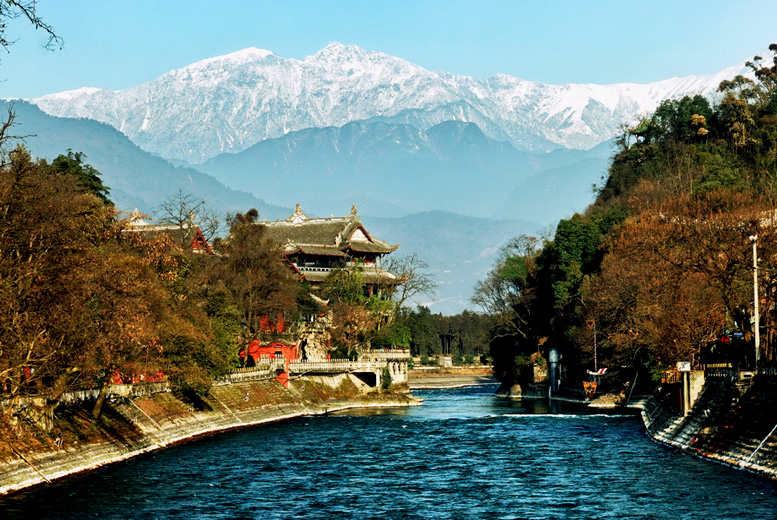 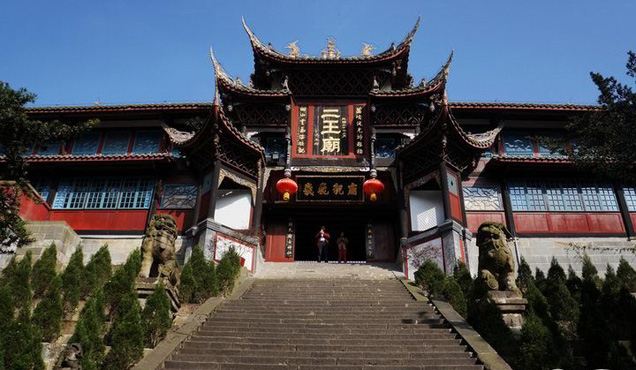 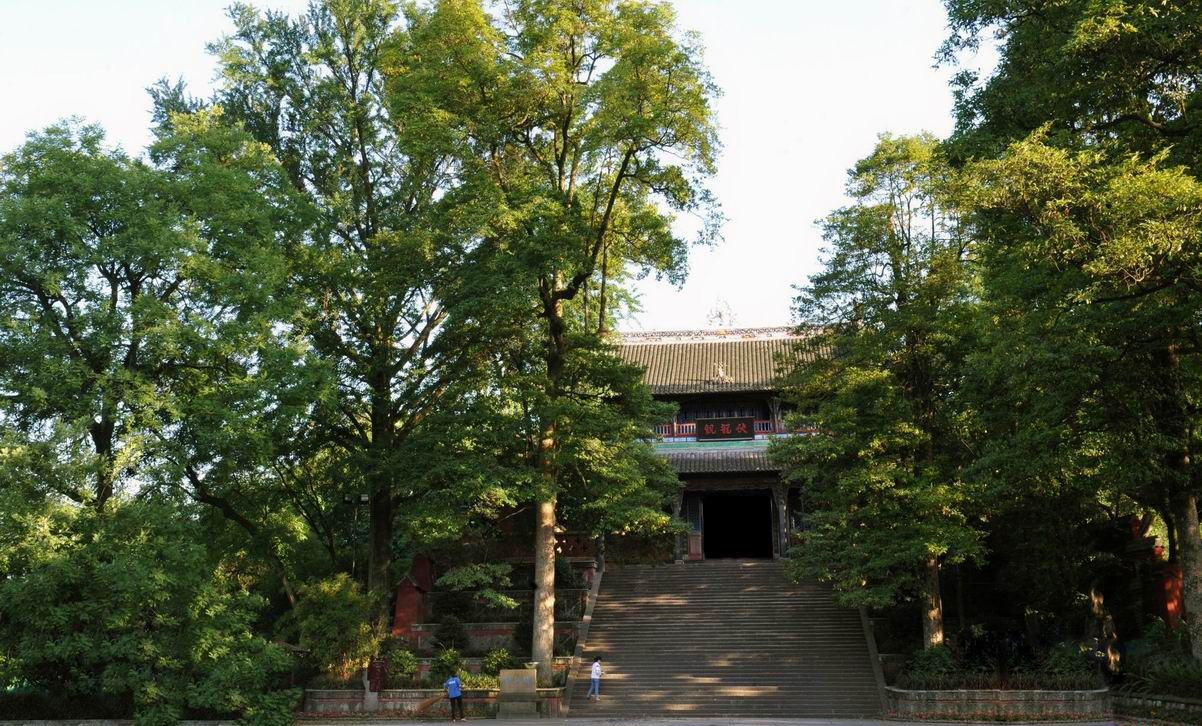 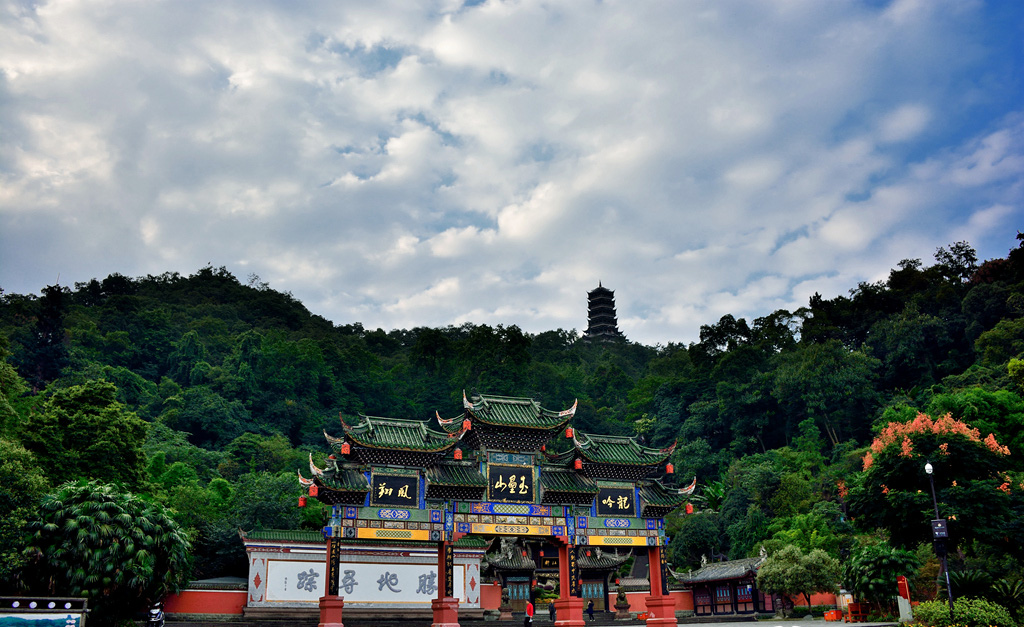 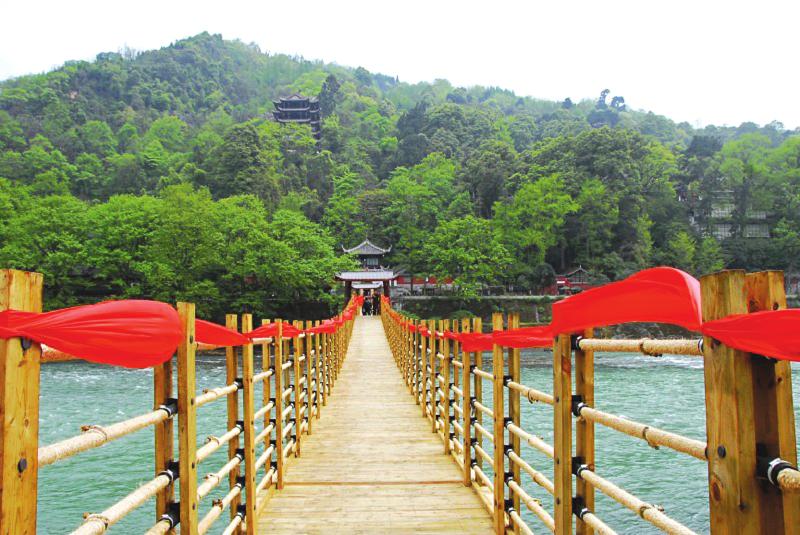 Getting to Dujiangyan Irrigation System

By Private Car (Top Recommended): Taking a licensed private car with the help of a local experienced driver is the most convenient way, because you can get from your hotel to Dujiangyan Irrigation System directly, without the hassles to find the right coach station or high speed railway station.

By Flight: Dujiangyan City has no airport, but it is only 1~1.5 hours away from Chengdu Shuangliu International Airport (双流机场) by car. After landing at Shuangliu Airport, you will find a direct Airport Shuttle Bus to Dujiangyan directly. There are 10 scheduled buses for you to choose, which are normally operated from about 10:30 am to 20:50 around.

By Coach: tourists can also take a coach from Chengdu Chadianzi Bus Station (成都茶店子车站) to Dujiangyan Bust Station. There are about 10 scheduled coaches for you to choose and the coach ride need 1.5~2 hours.

Getting Around Dujiangyan Irrigation System

Inside Dujiangyan Irrigation System Scenic Area, tourists prefer hiking all the way for sightseeing. There is also an optional sightseeing bus settled between Beiting (碑亭) and Yuzui (鱼嘴). To get to highest summit - Yulei Pavilion (玉垒阁) from the bottom of the hill in the scenic area, you can also chose to ride an optional escalator. 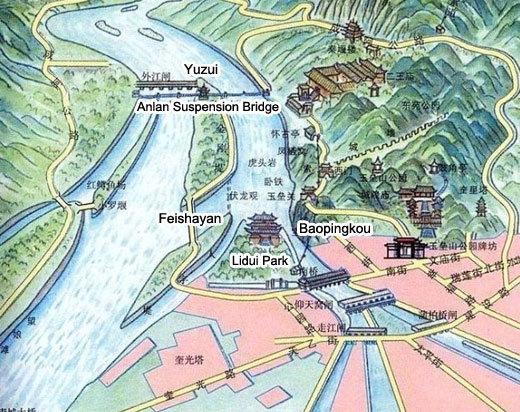 Here is the hot one day tour for those two destinations: 1 Day Dujiangyan – Qingcheng Mountain Tour 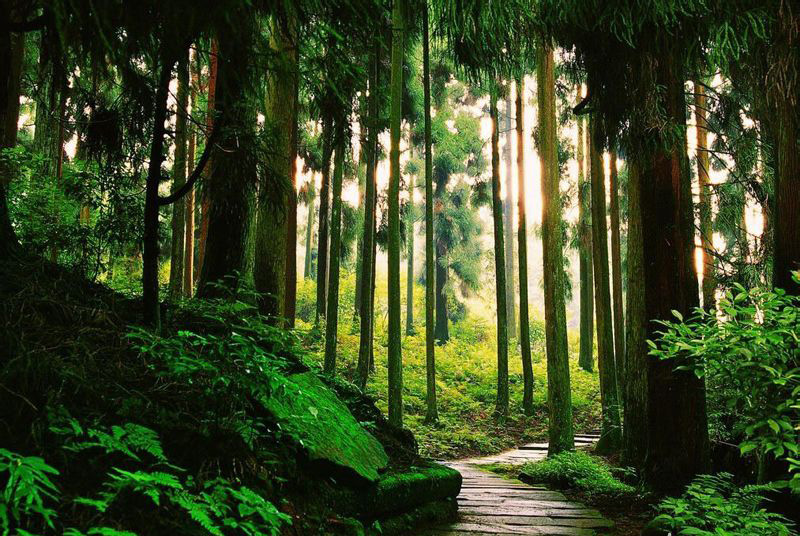 Love Feeding at Dujiangyan Panda Base

The best time to go is from April to October. During this time, the weather is very pleasant and the trees are lush and green. Dujiangyan is a famous summer resort, and when Chengdu is suffering from the summer heat, Dujiangyan’s temperature is still around 22℃. Besides, in summer, travelers can experience the Beer Carnival from May to October. While from Tomb Sweeping Day to National Day, travelers can see dance and song show in the morning, which tells the story of Li Bing – the builder of the Dujiangyan Irrigation System.

How to Plan a Dujiangyan Irrigation System Tour

Usually, tourists take a side trip from Chengdu to visit Dujiangyan Irrigation. Most of them spend half a day around (3~4 hours) to explore the magical Dujiangyan Irrigation System. And during the rest of that day, they will head to Mount Qingcheng to indulge in the peaceful natural forest and holy Taoist culture. Before or after the Dujiangyan tour, many visitors will take 1~2 days or so to discover the delicious food and fantastic attractions in Chengdu downtown, like Chengdu Panda Base, Jinli Ancient Street, etc.

If you love more otherworldly alpine sceneries and the atmosphere of Tibet, you are suggested to go further west along the Western Sichuan Small Tourists Loop to get more surprises. Western Sichuan offers world-class alpine snow-caped mountains, grasslands, lakes and a strong taste of Tibet is waiting for your visit. 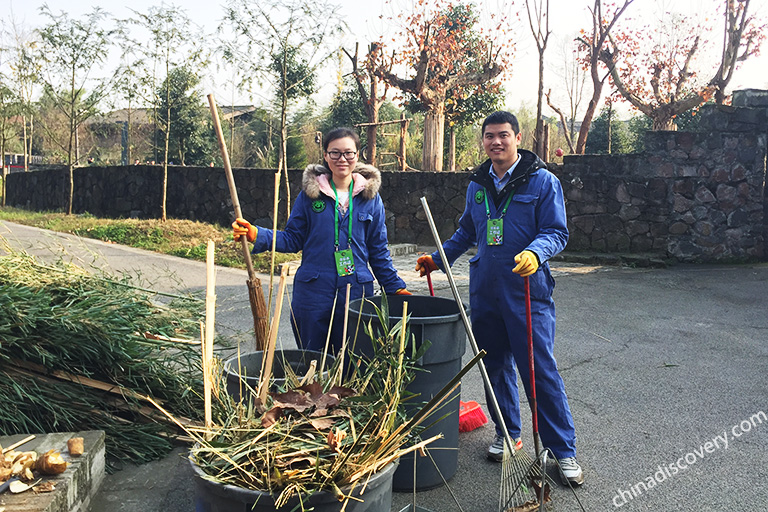 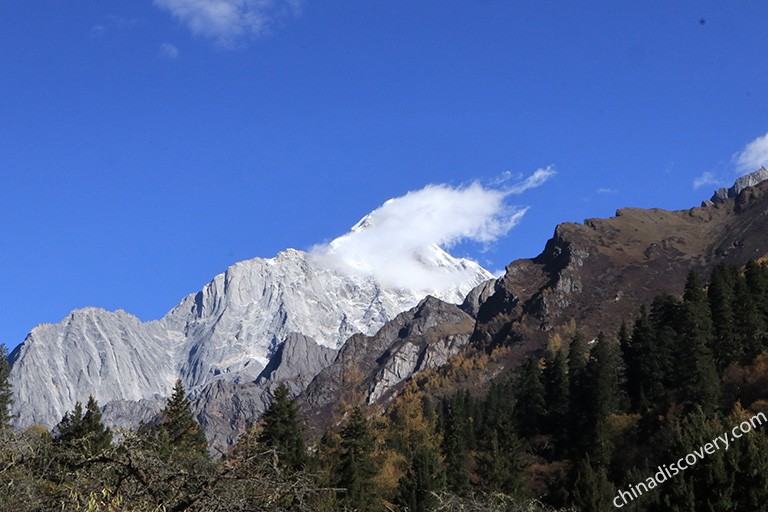 We China Discovery based in Chengdu have helped thousands and hundreds of tourists coming from the world traveling Chengdu and Dujiangyan. If you need any help of our local guide and driver, please feel free to contact us and tell us your needs! The tour can be tailor-made according to your group size, interests, physical condition, time, plan, budget and every special need!