Shangli Ancient Town in Ya’an city is an important courier station on the South Silk Road (the Ancient Tea Horse Road) that is the oldest international thoroughfare in China over 2,000 years ago. And it is the transit place for the “Red Army” during the Anti-Japanese War; as a result, some slogans and carving of that period still remain in this historic and cultural spot. Moreover, Shangli Ancient Town is listed as the “Top 10 Ancient Towns in Sichuan”, for a reason that it is embraced by mountains and waters around, with scattered fields and hills, featured wood houses in Ming and Qing styles, old streets paved with flagstones, characteristic ancient bridges, and so on.

Shangli Ancient Town has a very long history and it was called “Luo Sheng” in the past for it was the pass station on the ancient way from Ba-Shu plateau to other regions. The population in this town had been increased a lot until late Ming and early Qing dynasty when economy here was especially prosperous. After the liberation in China, the upper stream part of the local Longxi River was given the name of “Shang Li” (上里, meaning the upper town) according to its flow direction. 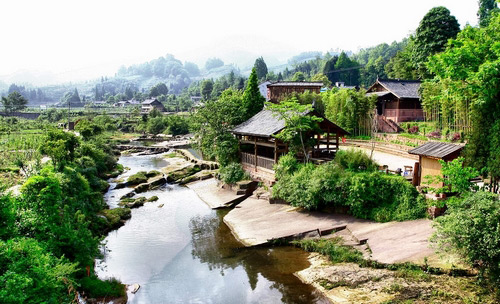 Since Shangli Ancient Town differs from other famous ancient towns and cities in Sichuan, it has a series of special highlights to feast your eyes! Such as the ancient bridges, memorial archways, quadrangles, spring, slogans of the “Red Army”, etc.

Dozens of ancient bridges are standing here in Shangli Ancient Town, among which the most featured are the Overpass in Qing Dynasty and the Two Immortals Bridge. The Overpass was built in 1749. Like the modern ones, this overpass has two side pavements on and below; Two Immortals Bridge over Longxi River at the western ancient town is a single arch stone bridge, and since it enjoys the surrounding lush mountains, emerald water, vigorous fields and tens of hills that people call “the 18 arhats worshiping the Avalokitesvara”, the scenery here is like an idyllic painting.

3 memorial archways are well preserved in Shangli Ancient Town. The imposing Two Filial & Chastity Memorial Archway for praising the chastity keeping of the two women in Han’s family is of high value. On the archway, birds and beasts are carved vividly, groups of drama scenes are engraved in cyan, green, red, gold, etc. Furthermore, you can also admire the amazing and rare story at the Nine Generations Stone Memorial Archway, which is awarded by the imperial court because the nine generations of Chen’ Family had lived here and multiplied to more than 1,000 persons.

This Han’s Quadrangle in Shangli Ancient Town is built in 1825 by 3 generations. Relievo, hollowed-out carving, and inlaid carving are utilized on the doors, windows, eaves, etc. All the skills are so valuable and exquisite that you can totally walk inside, along the corridors to get close to the precious art and may have the illusion of going back to the old life.

Experience the History of the Red Army

Since the Red Army has stationed in Shangli Ancient Town during the Anti- Japanese War, tourists can now see the remaining over 70 stone carving slogans. To well preserve the important historic relics of Chinese revolution, part of these slogans are protected in the exhibition hall in the courtyard of White Horse Spring.

The Baima Spring (White Horse Spring) was constructed in Tang Dynasty and named because clops can be heard here when ebbs and flows. Pearls Spurting Spring is always very clear and strings of bubbles like white pearls come out from the bottom, which is both beautiful and diverting. 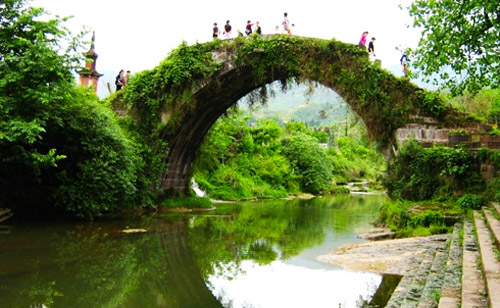 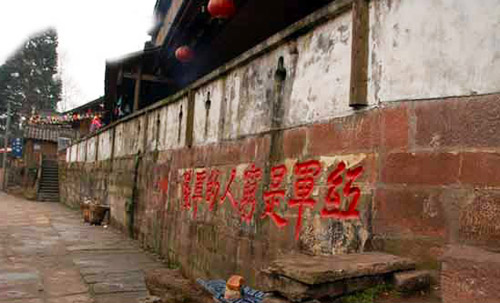 Slogans of the "Red Army" in Shangli Ancient Town

Walk into Shangli Ancient Town and appreciated the decorations on the Two Filial & Chastity Memorial Archway, and see the Red Army Stone Slogans. Wander along the river to the Han’s Quadrangle to feel the antique life and skillful carvings, and then enjoy the eye pleasing idyllic scenery, Two Immortals Bridge, and the Ancient Tea Horse Road. Next, you can stroll along the same way back to the other side of Han’s Quadrangle to see the White Horse Spring. (For 2-3 Hours)

Plenty of residence inns are provided in Shangli Ancient Town. Most inns are wooden in special styles with full equipment, clean environment and nice price.

>> Learn more about Where to Stay in Ya'an 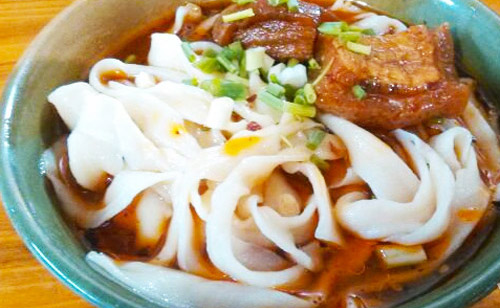 Very close to Shangli Ancient Town, Bifengxia Valley is a National 4A Scenic Spot with verdant emerald trees for all four seasons. Not only eye-catching natural sightseeing like waterfalls, gorges, pools, etc. can be viewed here, but many adorable and fierce animals live in this mysterious place, such as pandas, monkeys, tigers and so on. A great experience is that visitors can get close to the lovely pandas in the Bifengxia Panda Base. 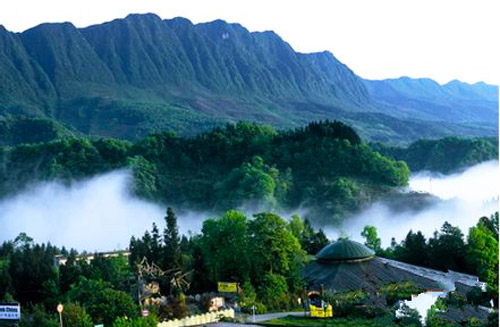 Location & How to Get to Shangli Ancient Town

Shangli Ancient Town is located in Yuchen District inYa’an City, just about 140 km southwest from Chengdu downtown and it needs about 2 hours and a half to drive here from the downtown of Chengdu.

There are many coached running from Chengdu Xinnanmen Bus Station to Ya’an from 7:30 to 19:00 every day. After arriving in Ya’an for about 2 hours, you can take a minivan to Shangli Ancient Town for nearly 30 min.

By Our Private Tour (Top Recommended)

If you want to get rid of hustle of public transportation and troublesome navigation, you can book a private tour package which covers sightseeing, dining and transfer from us. Our local tour guide and driver will escort you to Shangli Ancient Town with speed and convenience, and take care of all the details. You just need to focus on sightseeing.

>> Learn More about How to Get to Ya'an Top 3 Ya'an tours chosen by most customers to explore Ya'an in the best way. Check the detailed itinerary, or tailor your own trip now with us. 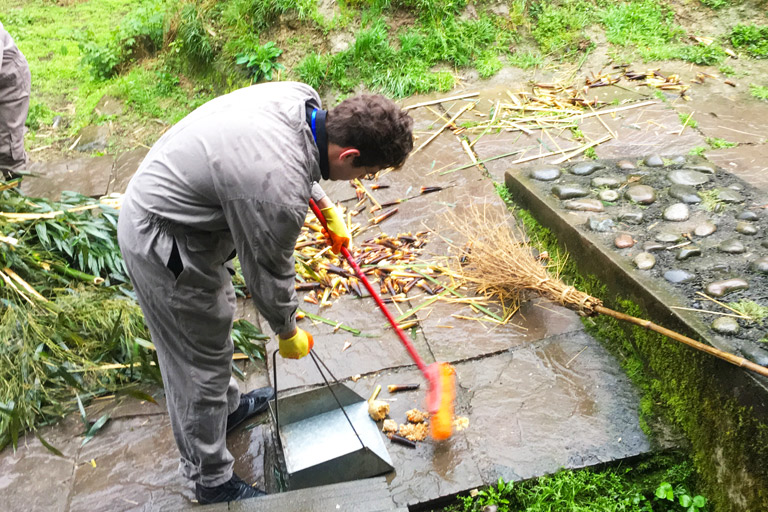 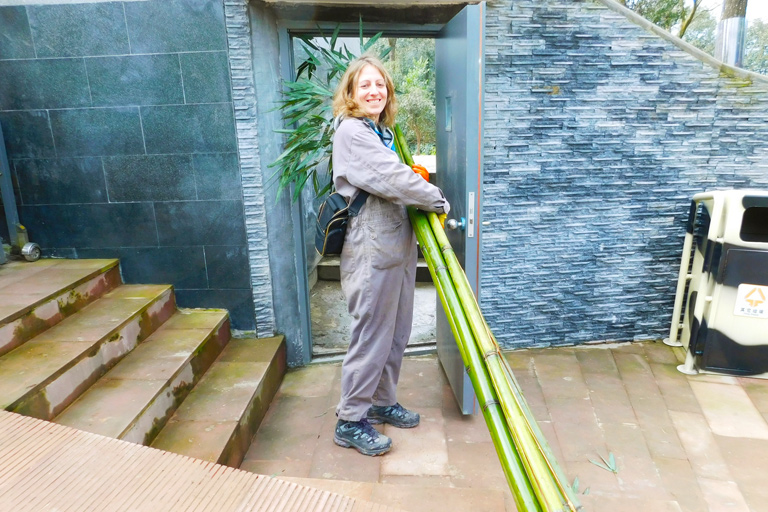 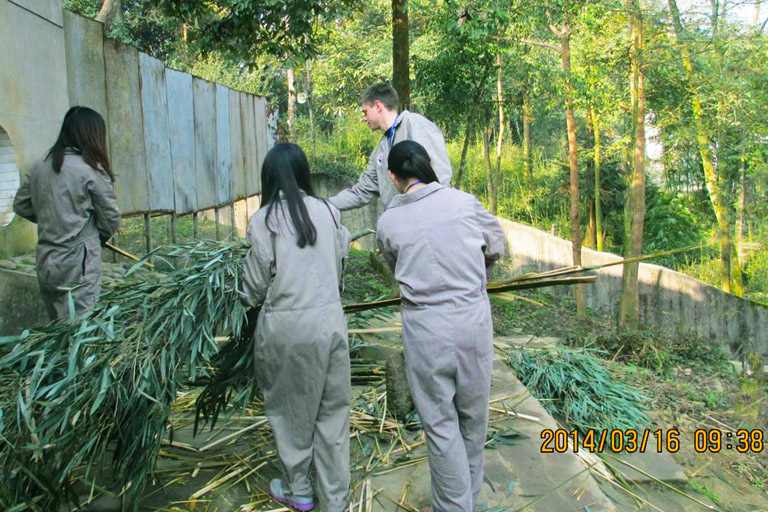