Jinci Temple, built to commemorate Tang Shuyu, the founder of Jin State (1033 B.C. - 376 B.C.) and his mother, is a combination of ancestral temple sacrificial architecture and natural landscape. There are many valuable architectures, murals, sculptures that have been existing for hundreds of years.

Jinci Temple was originally named Tang Shuyu Temple in memory of Tang Shuyu, the founder of Jin State (1033 B.C. - 376 B.C.), and his mother.

Jinci temple is the earliest classical ancestral temple garden building complex in China. There are 98 buildings, 110 statues, 300 tablet inscriptions and 37 casting works of art with a history of over 300 years. It is a model of the perfect combination of the ancestral temple sacrificial architecture and the natural landscape. The ancient buildings is the carrier of ancient Chinese architectural art and the colored murals and steles are national treasures. What’s more important, it proves the existence and heritance of Jin culture.

Jingci Temple is not a temple, but a combination of garden and ancient architectures with beautiful natural scenery and valuable cultural relics. Wondering in the vast Jinci Temple, there are two “Three Wonders” that you can not miss.

Shengmu Hall is the earliest existing main building of Jinci temple, constructed in Tiansheng Period (A.D. 1023-1032) of the Song Dynasty. It is said that the sacred mother is Jiang, the mother of Shuyu’s. The hall is wide and spacious surrounded by corridors, which is the earliest example of existing ancient buildings in China. It is a representative work of Chinese architecture in Song Dynasty, which is of great significance to the study of architecture and architectural development history at that time. It is identified as national treasure by the Ministry of Culture. The sculptures in the hall are also of great value.

This is the earliest extant dragon wood carving column in China, which was carved in A.D. 1087 in the second year of Yuanyou Period of Song Dynasty. Each of the eight dragons twines round a big pillar with angry eyes and sharp claws. It is like they are about to ride on mists and clouds. Although it has been nearly a thousand years, the dragon scales and beard are still lifelike with vigor and vitality.

Built in the Song Dynasty with a history of over 1000 years, the Flying Bridge Across Fish Ponds is an exquisite square bridge architecture between Shengmu Hall and Xiandian Hall. The whole beam frame is a relic of the Song Dynasty and this cross shaped bridge is also unique in the existing ancient bridges in China. There are 34 small octagonal stone columns in the pool, the top of which are bucket arches and sleeper beams supporting the bridge deck, which is the flying beam. The ingenious design wins this bridge the honor of the “oldest flyover in the world” and is identified as national treasure by the Ministry of Culture. 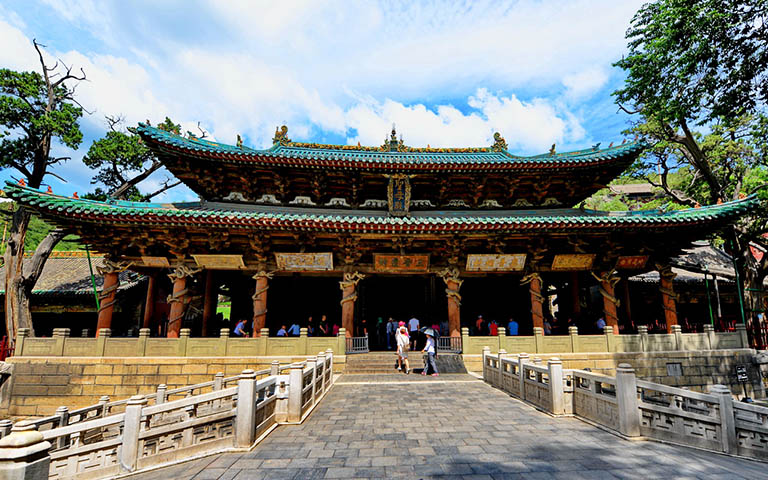 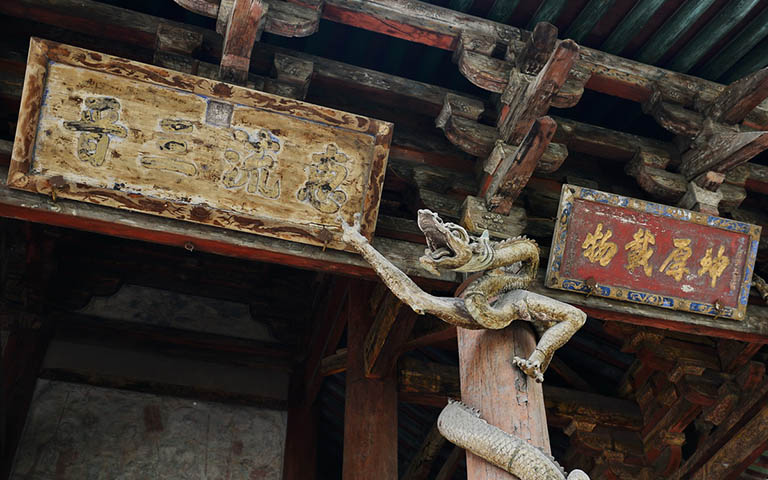 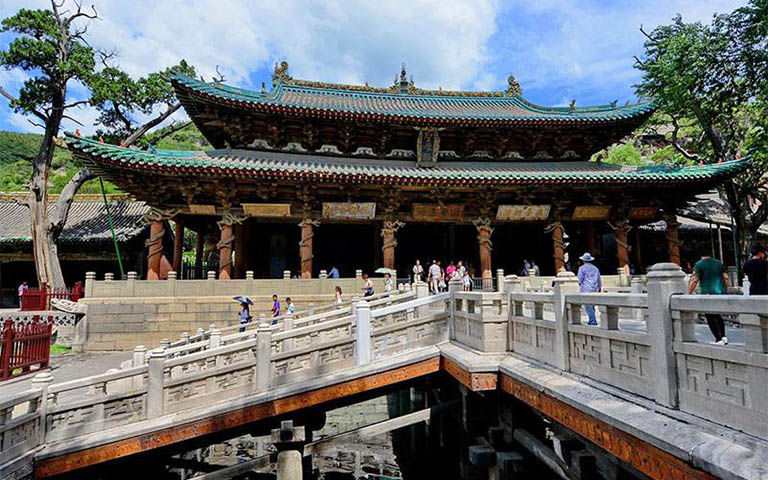 Zhou Bai Tang Huai are representatives of the old trees in Jinci Temple. Zhou Bai is a lush cypress planted in the Zhou Dynasty (1046 B.C. - 256 B.C.). It is located on the north side of Shengmu Hall. After thousands of years, it leans severely now and supported by a tree next to it. Tang Huai is a Chinese Scholar Tree planted in the Tang Dynasty (A.D. 618 - 907) in front of Shuijingtai. It is one of the most prosperous ancient trees in Jinci with thick shade every spring and summer.

These colorful sculptures are in Shengmu Hall. There are 41 statues of female servants in Song Dynasty (A.D 960 - 1279) and 2 statues in Ming Dynasty (A.D. 1368 - 1644). Among these colored sculptures, Jiang sits in the middle, with solemn and elegant appearance, a phoenix crown on her head and resplendent outfit, which is an image of a court ruler. These vivid statues presenting different shapes and moods are valuable materials for studying the sculpture art and costumes of the Song Dynasty.

Nanlao Spring, also known as "the eye of the South China Sea", comes from fault rock strata and gushes water all year round. There is a pavilion on the spring, which hangs a board with the Chinese characters "难老泉" written by Fu Shan, a scholar of the Qing Dynasty. Nanlao spring is the main source of Jinshui River (main river in Shanxi) which enables water to flows out here unceasingly. 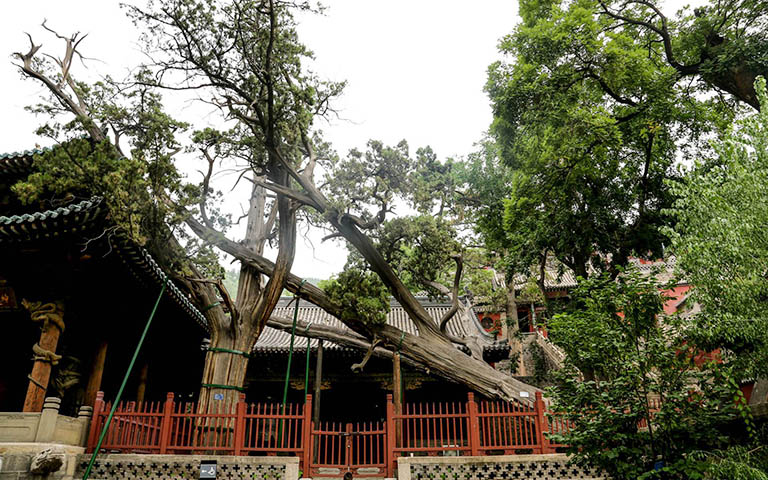 Cypress of the Zhou Dynasty 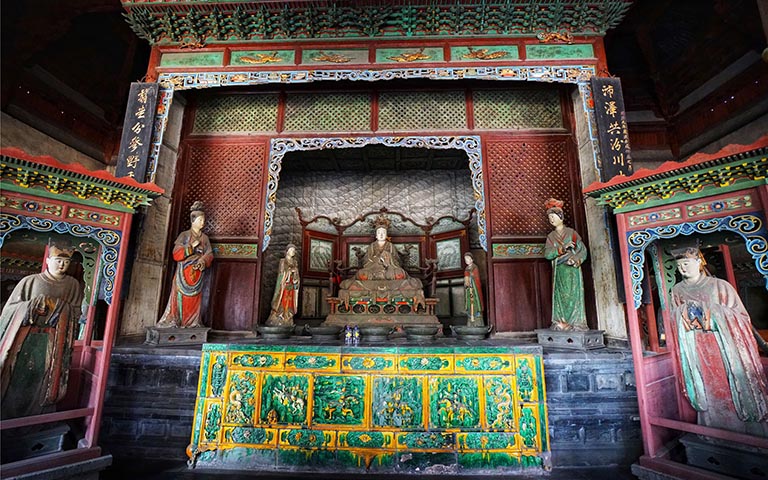 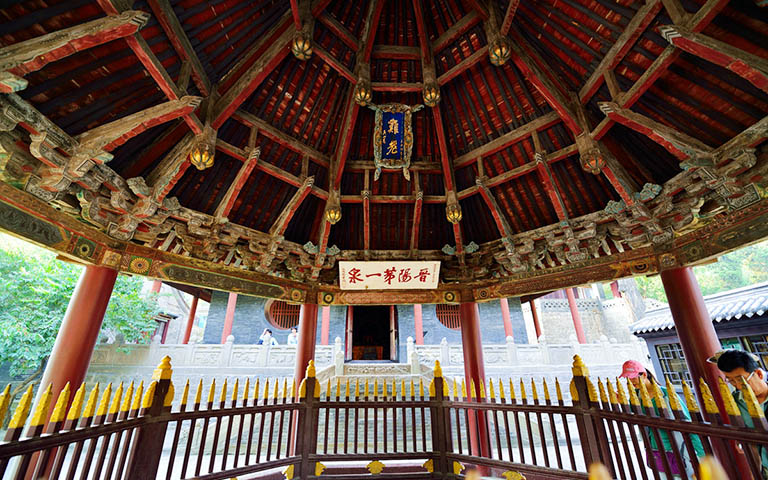 Getting to Taiyuan First: Before getting to Jinci Temple, you are suggested to reach Taiyuan city first. It is recommended to take a high speed train from Beijing (3 hrs), Xian (3-4 hrs), Pingyao (40min), etc. Flight is also available from Beijing (1.5h), Shanghai (2.5h), Chongqing (2h), Chengdu (2h10min), Wuhan (2h), etc.

Taiyuan to Jinci Temple Transfer: It is recommended to take a taxi or chart a car to Jinci Temple as it is a little far from downtown area and taking a bus will be too time-consuming. You can also book a private Taiyuan tour package from us that covers the transfer, ticket, accommodation, meal, etc. to save all the troubles. Contact Us Now>> 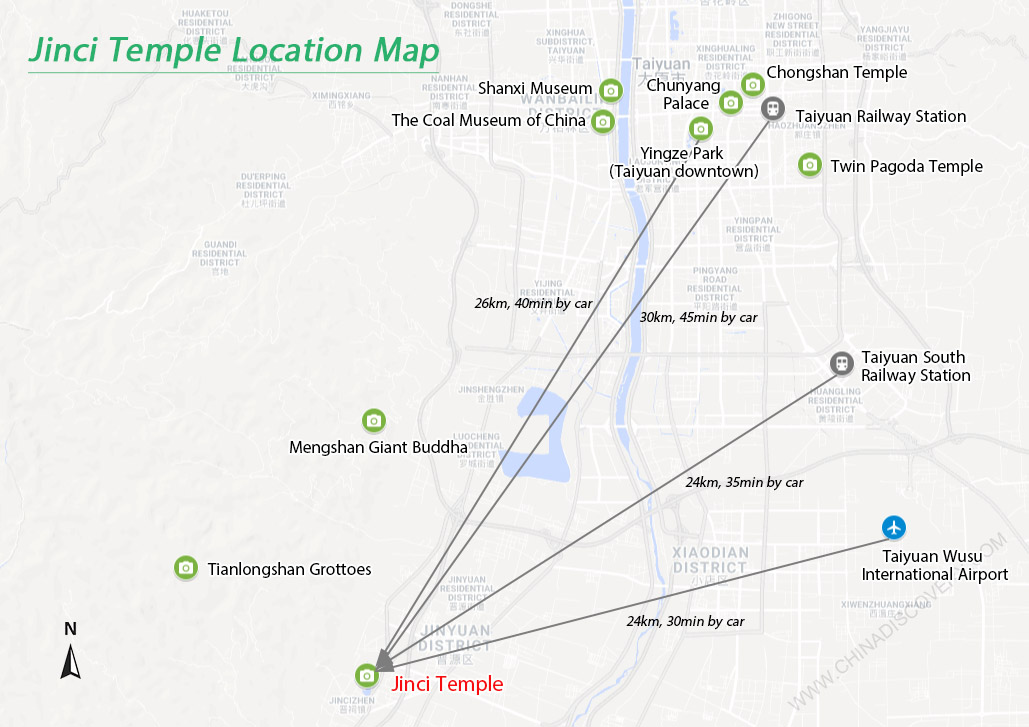 How to Plan a Taiyuan Tour

Best time to visit Taiyuan: April ~ October when the weather is agreeable with comfortable temperature and not much rain.

It usually needs 1-2 days to cover the highlights of Taiyuan. Most attractions in Taiyuan are cultural and historical sites such as Jinci Temple - earliest royal ancestral temple garden building complex in China, Chongshan Temple - Buddhist temple with precious original sutras, Twin Pagoda Temple - symbol of Taiyuan, Shanxi Museum - rich collections telling the history and achievements of Shanxi in the past thousands of years, and The Coal Museum of China - the only national coal museum showing you the development of Chinese coal industry and culture. Apart from Jinci Temple which is about 26 km to downtown, the other attractions are in city center with convenient transportation.

If you have more questions or ideas about a Taiyuan Tour, please feel free to contact us, we are specialized in tailor-made tours according to your interests, budget, itinerary, etc. Just tell us your needs and all your problems will be solved! 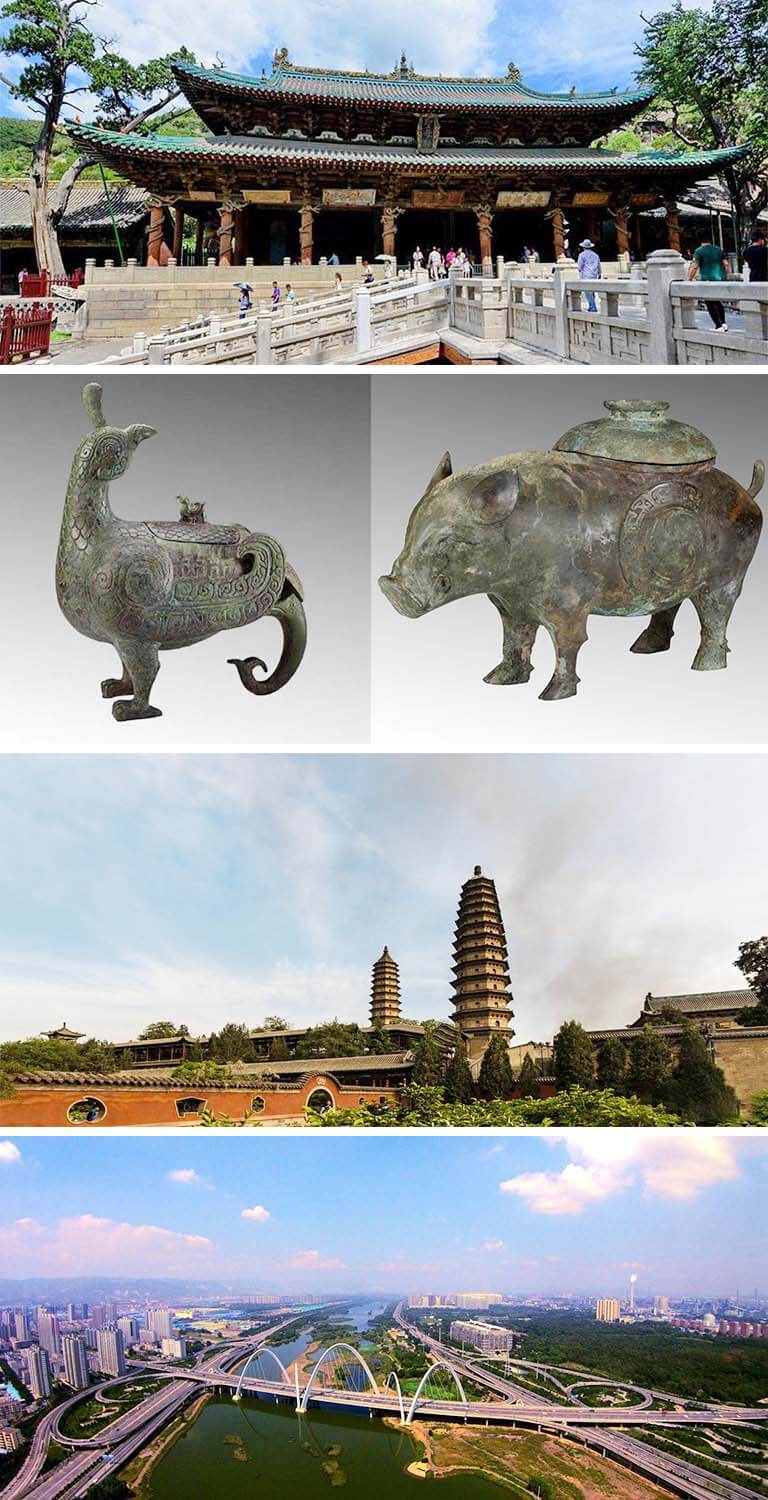 Top 3 Taiyuan tours chosen by most customers to explore Taiyuan in the best way. Check the detailed itinerary, or tailor your own trip now with us. 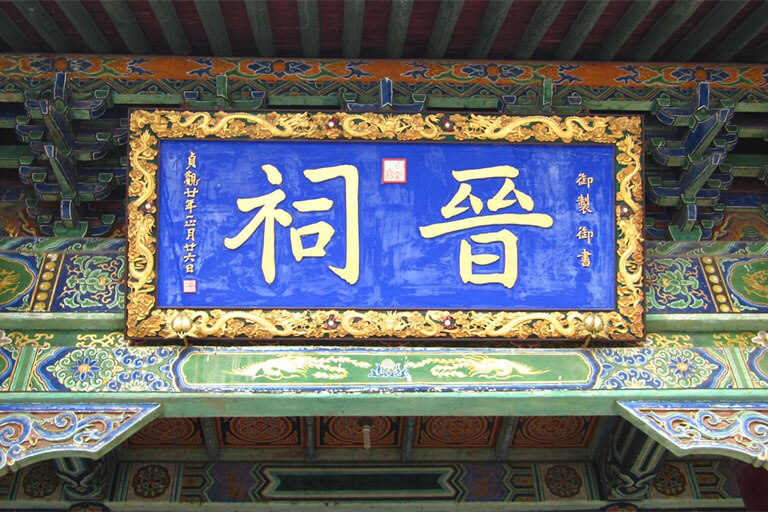