The Two Main Airports in Shanghai

Currently, Shanghai has two airports, both are international airports serving thousands of airlines with domestic and international (regional) destinations, and they are Shanghai Hongqiao International Airport (SHA) and Shanghai Pudong International Airport (PVG). Hongqiao Airport is located closer to downtown and most attractions than Pudong Airport, but Pudong Airport offers special Maglev Train for transfer. To help you enjoy the most convenient and efficient way to get from the airport to downtown Shanghai and nearby destinations, like Hangzhou and Suzhou, here we list the exact airports’ addresses, all accessible transports and times needed, advantages and useful tips for you to compare and choose from. Start your Shanghai travel from with our guide below! 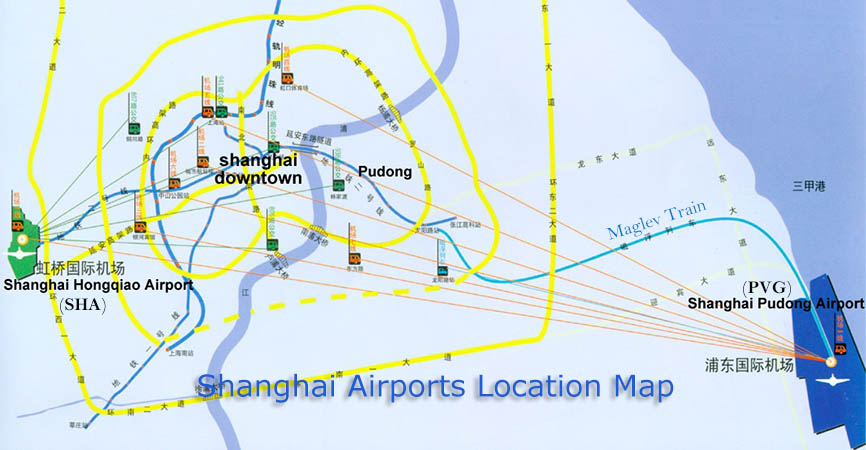 Airport transfer by public transport is either complicated or is a waste of time for travelers in Shanghai, especially for those who are in tight schedule. Travel with us, you can completely get ride of those worries, enjoy a hassle-free tour package covering convenient pick-up, drop-off and transfer service, well-organized itinerary, hotels, meals as well as other tour-related arrangements. After your arrival, local tour guide and drive will pick you up from the airport and escort you to your hotel or attractions in downtown by a clean, comfortable, licensed no-smoking private vehicle, that will also be offered during your entire sightseeing trip in Shanghai and leaving for next destination. Besides, if you arrive by a late night flight or bring lots of luggage, private car is more convenient and suitable for you.

Shanghai Pudong International Airport lies in the southeast suburb of Shanghai and operates most international flights to and leaving Shanghai. Another unique point is Pudong Airport has Maglev Train for travelers to experience. 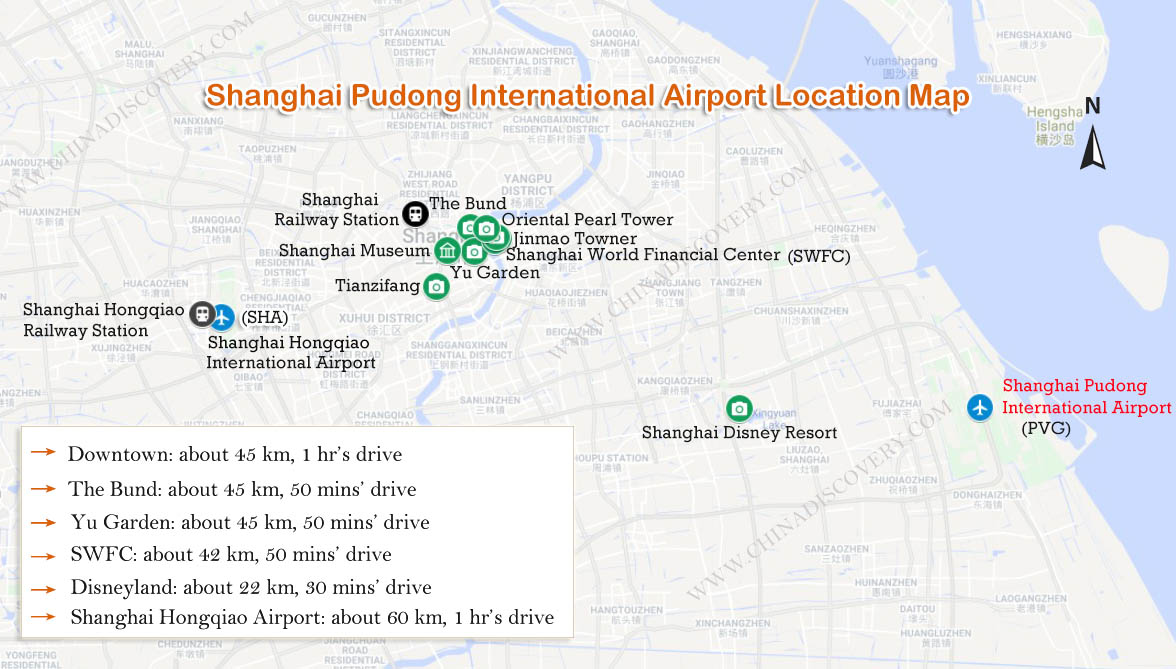 After arrival, if you want to get to the Shanghai city center, you can take a taxi which may spend you 1 hour and around RMB 150 ~ 200.

If you like to try the Maglev Train, you need to get off at Longyang Road Station, the terminus of the Shanghai Maglev Train, and transfer to Metro Line 2, which totally costs you almost 50 minutes. Meanwhile, Shanghai Metro Line 2 can take you directly from the airport to People’s Square in the city center, with about 1 hour and 20 minutes’ ride.

With a distance of about 22 km, Shanghai Disneyland (Shanghai Disney Resort) is the nearest tourists attractions of Shanghai Pudong International Airport. A private drive and a taxi takes about 30 minutes, while the simplest public transportation needs about 1 hour and 20 minutes by Shanghai Metro Line 2 and a city bus.

●Shanghai Pudong Airport to The Bund

Yu Garden is in Shanghai old town, about 42 km, 50 minutes’ drive from Shanghai Pudong International Airport. If you take the subway, you need at least one extra transfer for about 1.5 hours.

The Lujiazui skyscrapers, especially the 4 famous iconic towers are located very closer to each other. The driving distance to Shanghai Oriental Pearl Tower and other surrounding towers is about 43 km for 50 minutes’ ride, while Metro Line 2 takes approximately 1 hour.

To visit Tianzifang and Xintiandi in the Former French Concession, which are 46 km far from Pudong Airport, a private drive/taxi needs 50 minutes and other city transports takes 1 hour and longer.

Zhujiajiao Water Town is in the west outskirt of Shanghai, around 85 km away from Pudong Airport. You can get to Zhujiajiao by private drive, taxi (about 1.5 hours). Public transport is quite complicated and requires 2.5 hours long, so it is not recommended. 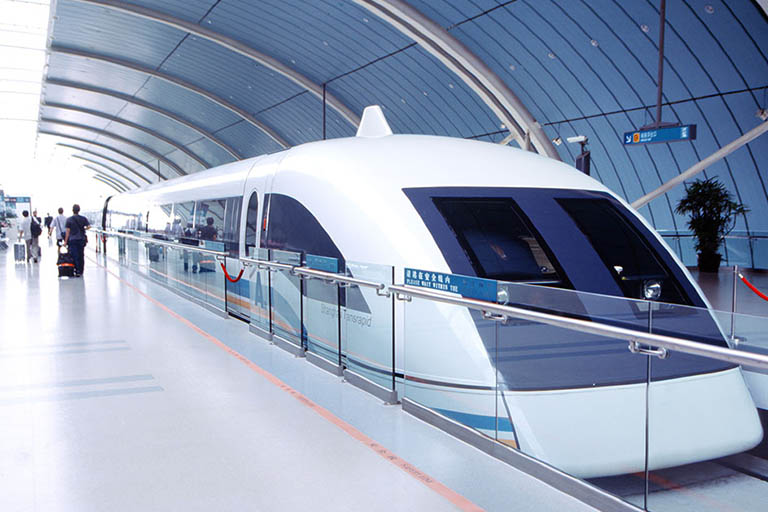 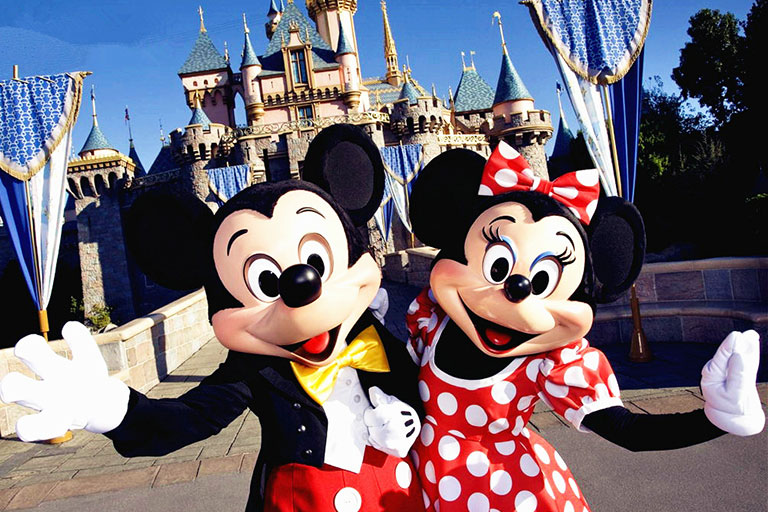 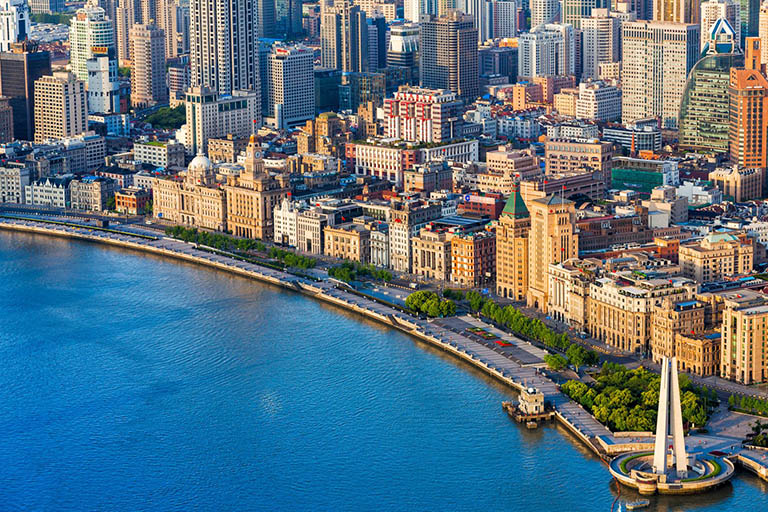 Shanghai's Must-Visit - The Bund in Downtown 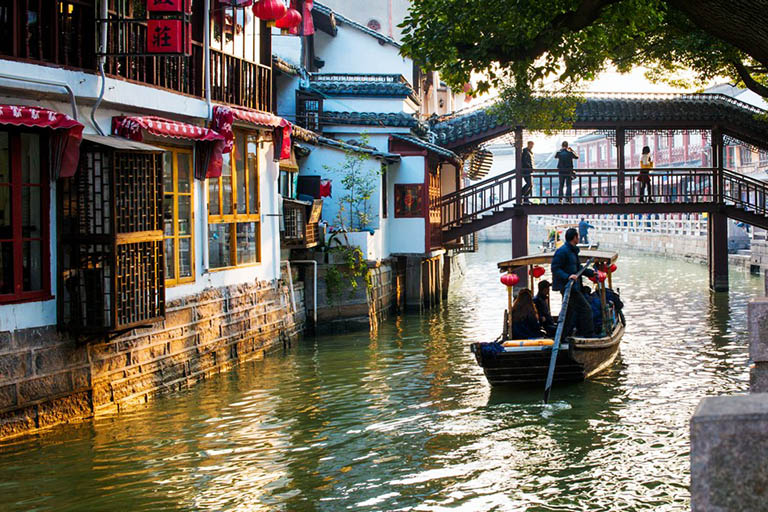 Zhuajiajiao Water Town in the West Suburb of Shanghai

Shanghai Hongqiao International Airport is about 60 km west of Pudong Airport, which takes about 1 hour’s drive, 1.5 hours by Airport Shuttle Bus Line 1, or by Metro Line 2.

Shanghai Railway Station is situated in the downtown area, about 50 km, 1 hour’s drive from Pudong Airport. Airport Shuttle Bus Line 5 can bring you to the train station straightforward with a duration of 1.5 hours.

The distance is about 45 km. It takes about 50 minutes by driving; 1.5 hour by several transfers of city bus and metro.

Wusongkou Cruise Port is about 50 km from Pudong Airport, which takes about 1 hour by car and about 2.5 ~ 3 hours by public transport.

If you are planning a side trip to Hangzhou and Suzhou from Pudong Airport, private drive is the most convenient way, for you can save time on extra transports and get to your hotel and attraction you want to visit forthright. Transferring to railway station for taking high speed train to Suzhou and Hangzhou is also available but that takes a longer time.

By Private Drive: around 2.5 hours

By Bus: You can take a long-distance bus to Hangzhou from the Shanghai West Bus Passenger Station near Pudong Airport. The buses depart nearly every hour between 08:40 and 21:00, and take about 3 hours to reach Hangzhou.

By Private Drive: around 2 hours

By Bus: Likewise, you can take a direct bus to Suzhou from the Shanghai West Bus Passenger Station near Pudong Airport. The ride is about 2.5 hours. The bus runs between 09:20 and 21:00 daily, nearly departs every hour. 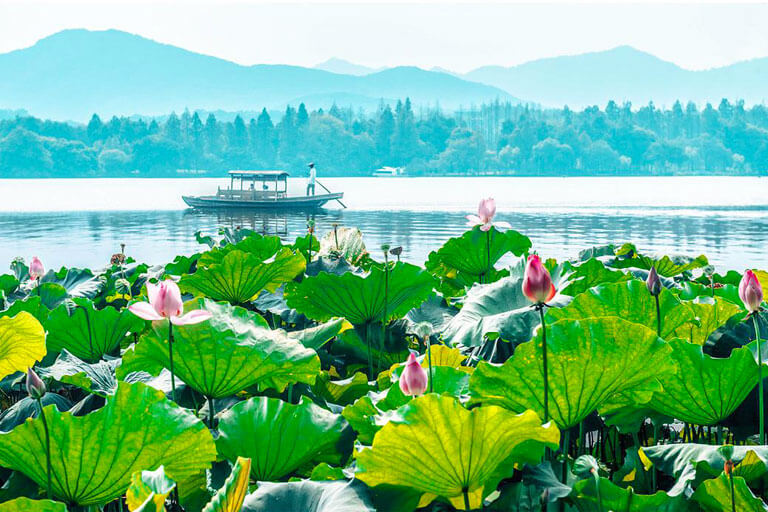 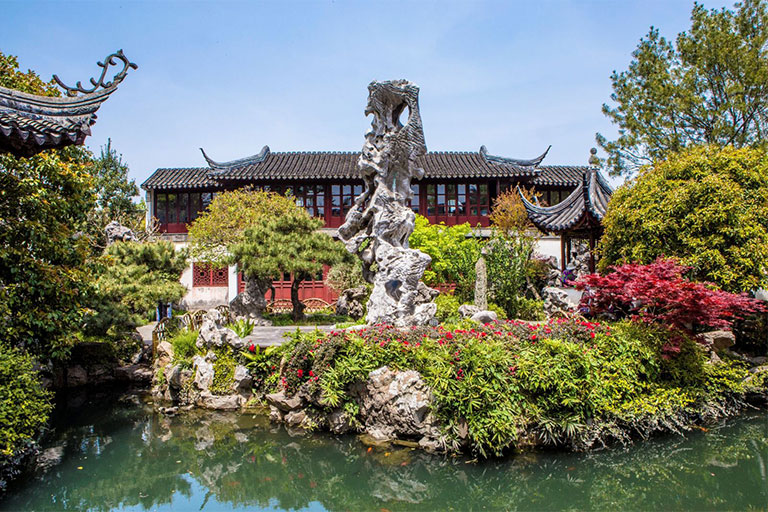 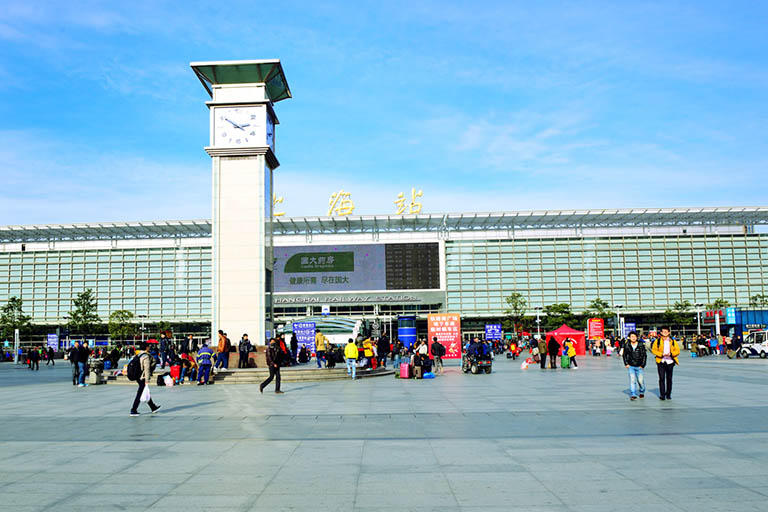 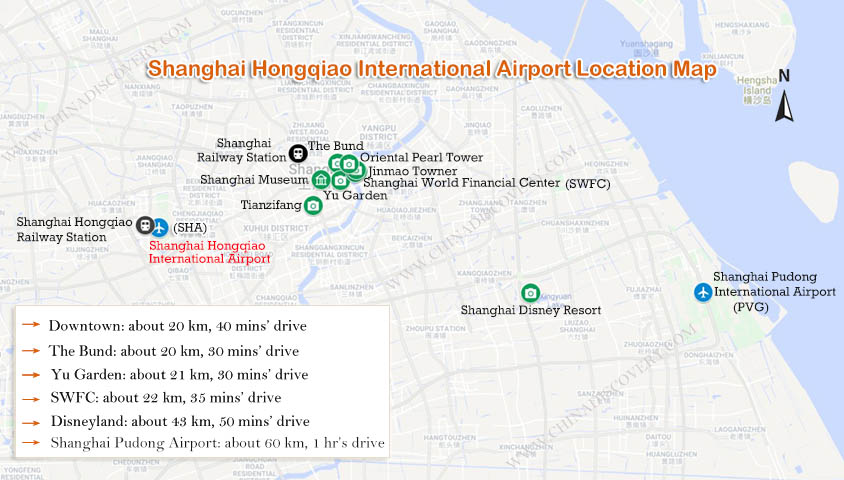 ●Hongqiao Airport to Xintiandi/Tianzifang: around 20 km, 40 minutes by drive; more than 50 minutes by subway and city bus

Transfer from Hongqiao Airport to Other Transportation Hubs

●To Shanghai Wusongkou International Cruise Terminal: about 40 km, 50 minutes by car; over 2 hours by public transport 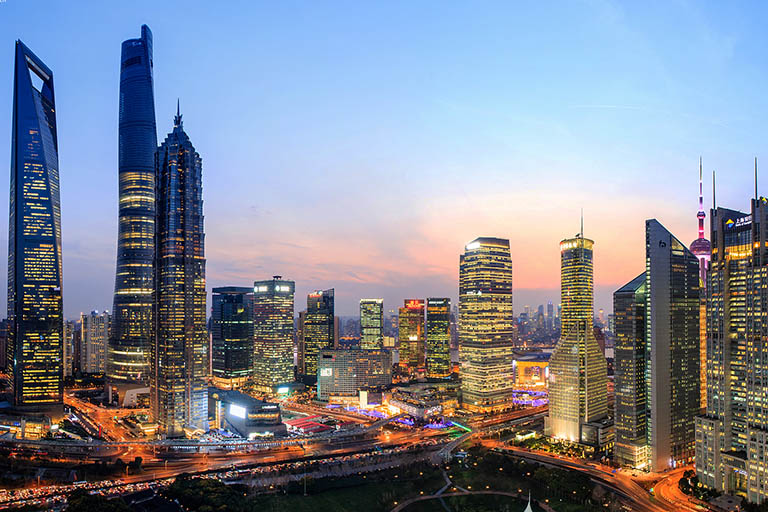 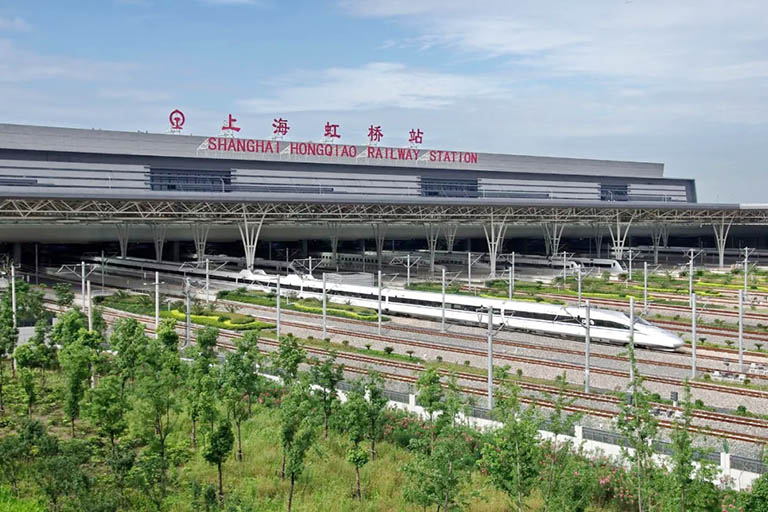 By Private Drive: around 2.5 hours

By Bus: Currently, there is no direct bus available. However, there are buses to Hangzhou departing at bus stations in downtown, near Shanghai Pudong International Airport, which is rather sophisticated and time-wasting.

By Private Drive: about 1 hour 20 minutes

How to Get to Shanghai: You can fly to Shanghai directly from Hong Kong, Tokyo, Seoul, London, Los Angeles & many overseas countries (regions) and almost all major Chinese cities, like Beijing, Xian; or take high speed bullet train to Shanghai from domestic cities.

Best Time to Visit Shanghai: March to May (in spring) & September to November (in autumn), because these periods offer beautiful nature scenery and comfortable weather for outdoor sightseeing and activities.

Best known as an international popular tourist destination, Shanghai perfectly preserves mixed culture of the western and eastern. The duration and theme of your Shanghai tour can be flexibly arranged based on your time and interests. Usually, tourists spend 2 days on sightseeing the most famous landmarks, including the Bund, Yu Garden, skyscrapers like Shanghai Tower, World Financial Center, Former French Concession, Shanghai Museum, etc. With one extra day, you can enjoy family fun in Disneyland Park or visit Zhujiajiao Water Town in the suburb. Don't miss the Shanghai Maglev Train, wonderful nightlife and Shanghai Cuisine.

Convenient transportation makes it quite efficient and popular to make day trips from Shanghai to Hangzhou, Suzhou, and longer vacation in Huangshan Mountain, Nanjing, Mount Jiuhua and other places in surrounding areas. So you can visit West Lake and learn Chinese tea culture in Hangzhou, marvel at tasteful classical gardens and witness Chinese silk productive process. Splendid rocky mountains with exotic pine trees are highlights in Huangshan Mountain.

Beijing Xian Shanghai are golden triangle cities often visited together for a week holiday. You can use 3 days to visit the Great Wall and major iconic spots like Forbidden City, Temple of Heaven in Beijing, and leave 2 days for fulfilling your Terracotta Warriors tour in Xian. With more time, you can extend the trip from Shanghai to Zhangjiajie, Guilin, Chengdu, Yunnan, Silk Road, Tibet and more phenomenal destinations to enrich your China discovery. (more top China tours from Shanghai >>)

As a leading travel agency in China which dedicates to offering high-quality China tours, China Discovery has helped thousands of travelers enjoy their trips to Shanghai, Beijing, Xian, etc., in China. Travel with us, you can enjoy worry-free tour services as well as well-organized itineraries, even our assistance of Chinese Visa application, convenient airport/train station pick-up & drop-off and transfer between all scenic spots, knowledgeable tour guide, safe & licensed private vehicle, satisfactory accommodation and dining and so on. You are free to choose from our most popular Shanghai tour packages or contact us to design a memorable holiday in Shanghai, China. 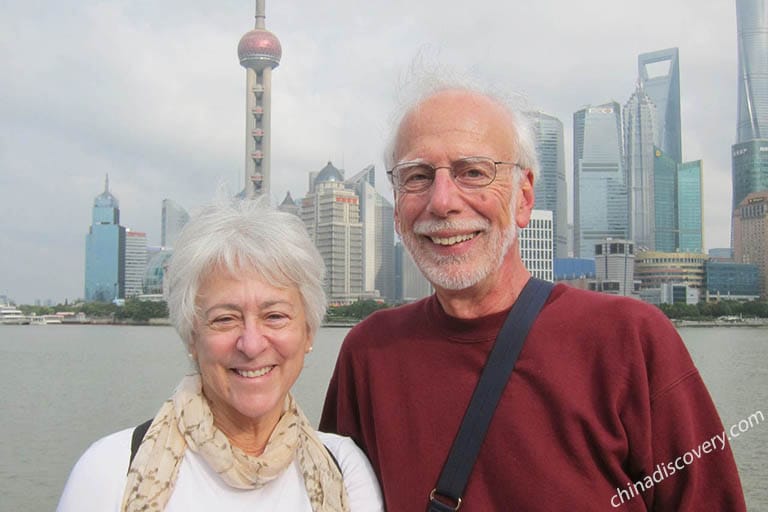 Paul & His Wife Visited the Bund 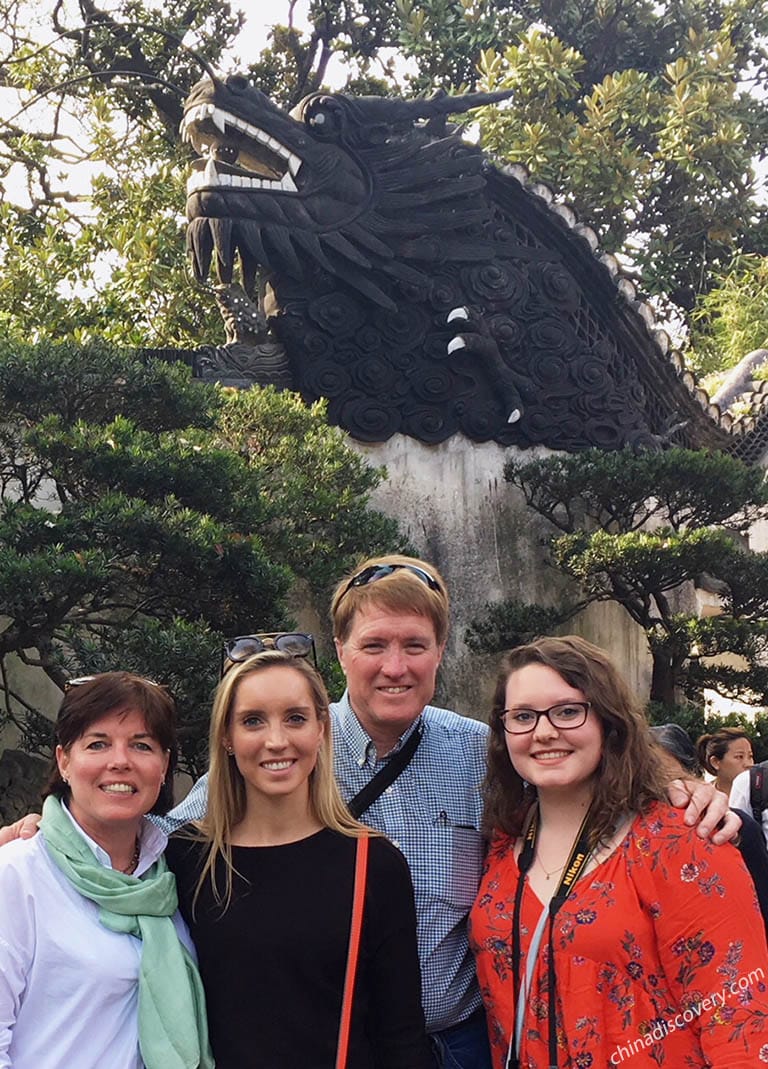 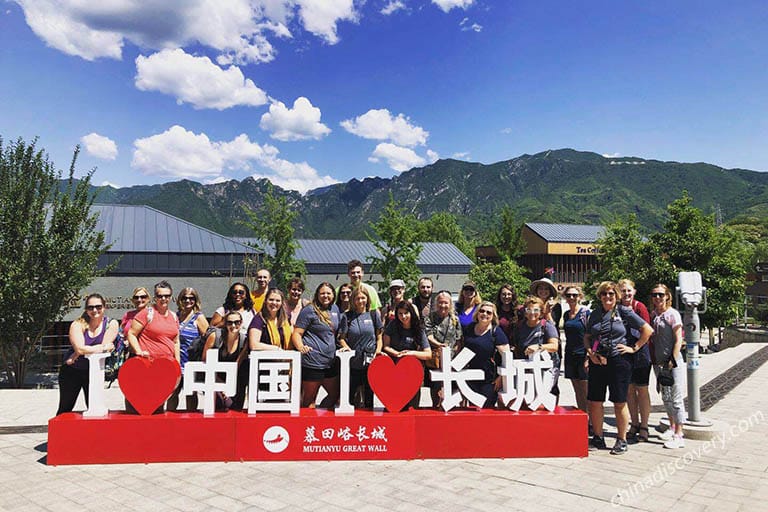 Top 3 Shanghai tours chosen by most customers to explore Shanghai in the best way. Check the detailed itinerary,or tailor your own trip now with us. 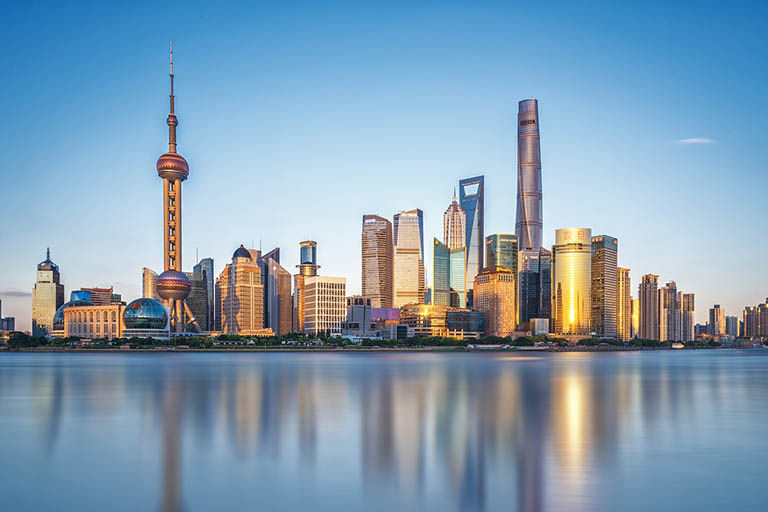 3 Days Shanghai Past and Present Contrast Tour (at Leisure Pace)