The Giant Wild Goose Pagoda, located in southern Xi’an, is a very famous ancient pagoda in China built for more than 1,300 years. It is the bright pearl on the Silk Road with excellent architectural beauty, precious Buddhist relics, rich religious culture, stories of the famous ancient monk - Xuan Zang, etc.

Giant Wild Goose Pagoda (大雁塔) is also called the Big Wild Goose Pagoda, the Great Wild Goose Pagoda and Dayan Pagoda. Built for over 1,300 years, it is now the earliest attic-styled square brick tower in Tang dynasty (唐朝) with the largest scale in China. Moreover, this pagoda enjoys rich Buddhist culture, profound history of famous figures, splendid architectural art, etc. so it is regarded as the gem of Chinese ancient architectural history and a sacred Buddhist land. Now, it is both the landmark of Xi’an city and the vital place for the welcoming foreign leaders and friends.

Daci’en Temple (大慈恩寺), where the Giant Wild Goose Pagoda is located in, was built in 648 AD, because the prince Li Zhi (李治) wanted to pray for his deceased mother and pay back to her kindness, when Master Xuan Zang (玄奘) was announced the first abbot.

In 652 AD, Xuan Zang brought the precious sutra and other relics from India along the Silk Road back to ancient China and translated the valuable Buddhist text here, since then the Giant Goose Pagoda has been one of three largest Buddhist text translating places in ancient China. To well preserve these treasurable Buddhist culture, the pagoda was constructed for 5 floors. According to the historical materials, the Giant Wild Goose Pagoda has been rebuilt for many times, and it finally gets the appearance of 7 floors of about 65m high at present. 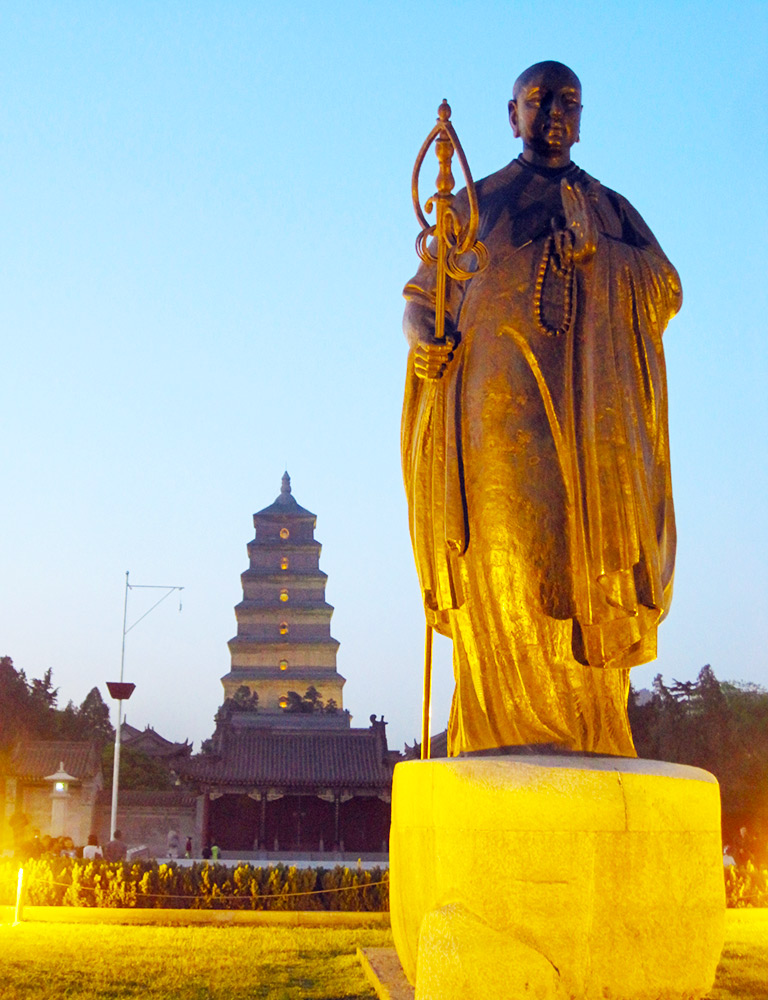 The Giant Wild Goose Pagoda of attic-styled square pagoda of brick imitating wood structure consists of the base, the body and the finial. The whole pagoda is about 65m high with the height of the base being 4.2m and the finial being 4.87m.

The Base of the Pagoda

Buddhist statues with delicate carving and couplets of brick carving are well placed on the lintel and door frame. Furthermore, you can appreciate the historic tablet of high value composed by the Taizong Emperor (唐太宗) and the Gaozong Emperor (唐高宗) of Tang dynasty and wrote by the renowned calligrapher Chu Suiliang (). When seeing this perfectly kept tablet, you can not only appreciate the excellent calligraphy, vivid carving patterns, but also the compliment of the arduous Buddhism seeking of Xuan Zang.

The body is the main part of this pagoda, so you can just stroll from the door up to the top floor, admire the featured cultural relics and feel the dense atmosphere of Buddhism. From the history, character, story of Tang dynasty and the life brief of Xuan Zang after entering the south gate. Clime up higher, you can see a series of Buddhist statues, paintings, famous poems for over 1, 000 years, the rare poems of Xuan Zang, and so on. And more, the treasure of this pagoda is the gilding copper statue of Sakyamuni who is the founder of Buddhism. For its sacred culture, groups of visitors come to look this statue with reverence at the 2nd floor.

Besides the illusion of the well-known poets Du Fu (杜甫), Cen Shen (岑参), Gao Shi (高适), etc. expressing their emotions through composing poems and enjoying liquor here at the 6th floor, you can climb up to the top 7th floor and have a full view of this ancient city. It feels like being in the ancient Tang dynasty with crispy chimes and curling incense, and it also seems a Buddhist fairyland with the multiple Buddha statue and other precious relics.

The Sarira is the especially holy object for worshipping in Buddhist culture. There are 2 precious Sariras preserved in this pagoda, which were presented by the Shiwuqian (释悟谦) Master from India. According to the related books, Xuan Zang has brought many Sariras back to China, 150 or more than 10,000, no believable evidence. And people still believe they are kept in the underground palace.

The pattra-leaf manuscript is the infrequent treasure of Buddhism, which is the Buddhist text written on the pattra leaves for the lack of writing paper. Xuan Zang has brought 657 pattra-leaf manuscripts back, among which, two of about 40cm long and 7cm wide are enshrined on the 4th floor. The thickly dotted Sanskrit is very rare since there are less than 10 people understand.

Many specialists believe that there is a palace under the pagoda, which is like the palace under the pagoda in Famen Temple (法门寺) . Evidenced from the historical records, Xuan Zang has brought a lot of valuable relics from India in 645 AD. Recent years, the underground palace was found existing, and many precious relics of Sariras, Pattrra-leaf Scriptures, statue of Xuan Zang, wall paintings, etc. are placed there.

Daci’en Temple where stands the Giant Wild Goose Pagoda was the most famous and grand temple in ancient Xi’an in Tang dynasty, built by the prince Li Zhi in memory of his deceased mother in 648 AD. Being a major translating place for Buddhist text, this temple is especially rich in Buddhist culture. You can stroll in this temple to appreciate the featured Buddhist temples of Chinese style and know more about the life experience of Xuan Zang in the Xuan Zang Temple, and appreciate the historic bell tower and drum tower to feel the antique flavor of ancient China.

The north square is actually a fountain square of 20,000 square meters wide, which is both the largest fountains square and largest waterscape square in Asia. You can see the 2 group sculptures of 100m long, 8 large figure sculptures and 40 landscape sculptures, while appreciate the grand colorful fountain show dancing with the music. Visitors always feel it relaxed with the cool water spurting out, sparkling colorful lights, and the innocent laughing of local people.

Tips: Since the opening time are different in peak season and off season, so please contact us for specific time.

First enter the Daci’en Temple to feel the rich Buddhist culture and admire the featured old temples. And then, appreciate the appearance of Giant Wild goose Pagoda from a distance or in front of it. If you want to explore more, you can enter the Pagoda to admire the rich Buddhist culture with the precious relics of Buddha statue, paintings, stories of Xuan Zang, etc. up to the top. And appreciate the beautiful view of the while Xi’an city at the 7th floor. Then, come down to north square to have fun with colorful fountains dancing to the music. (For 2-3 hours) 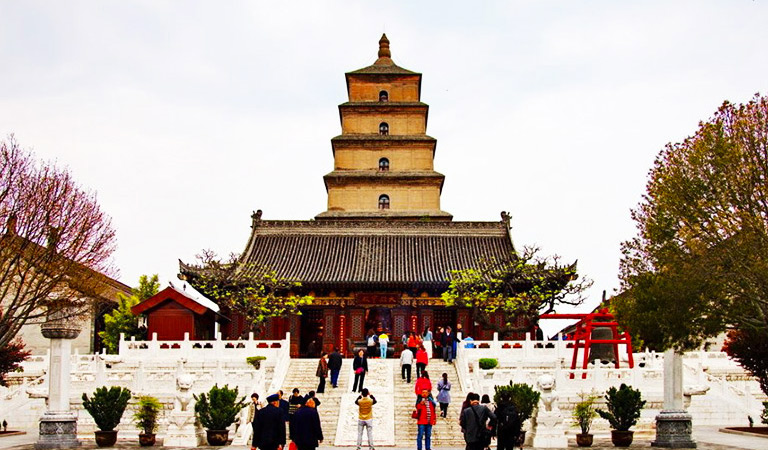 Appreciate the Front Appearance of the Pagoda 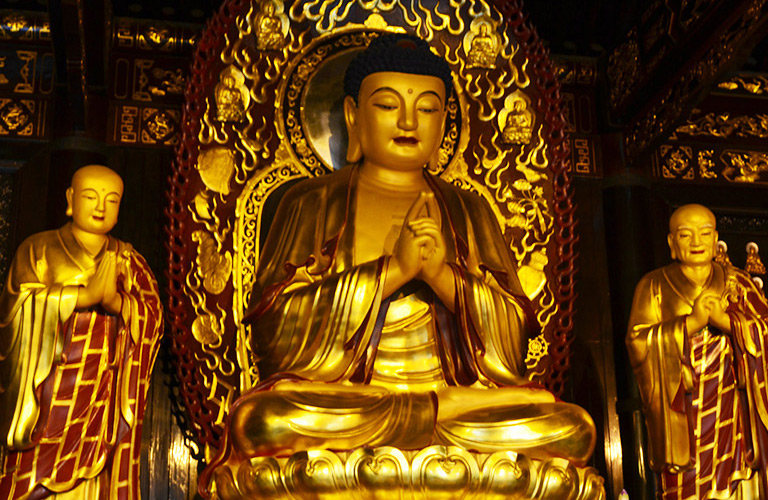 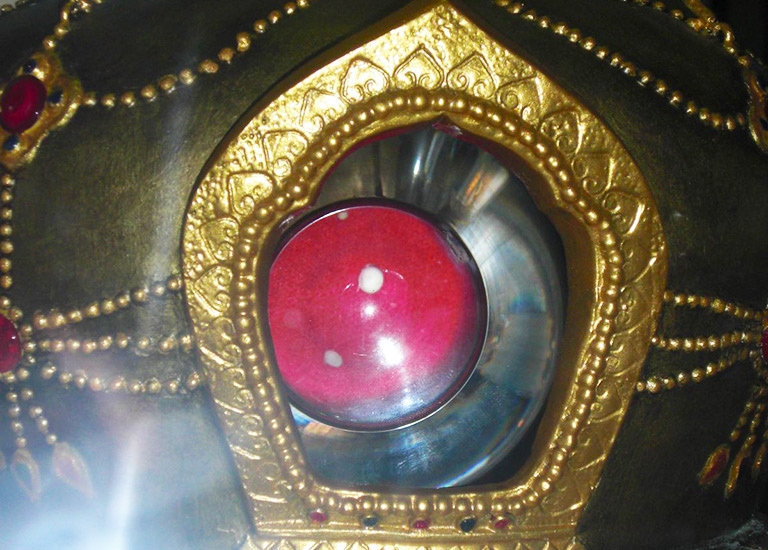 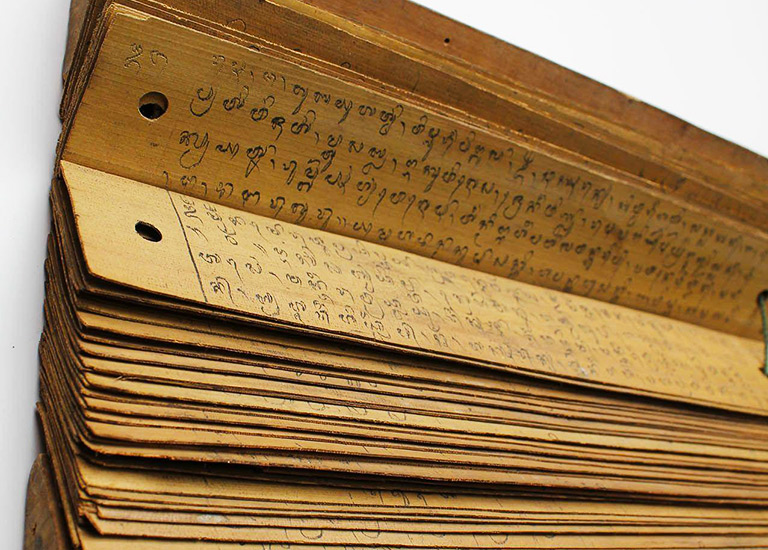 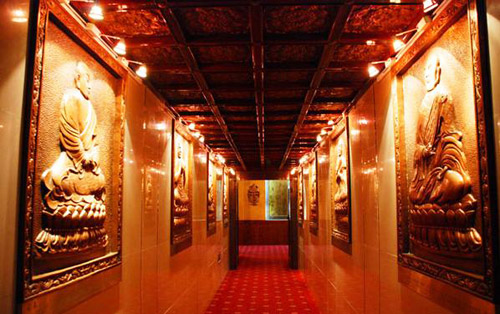 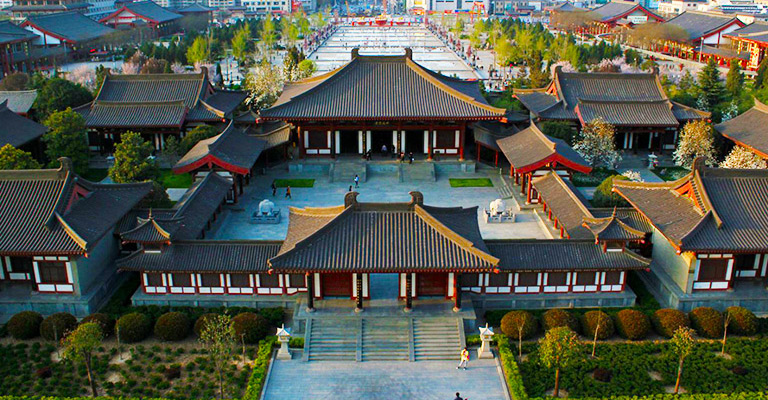 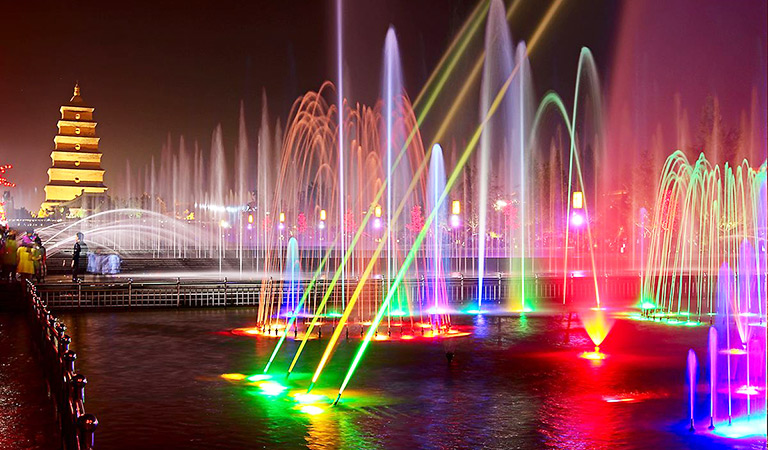 Xian has a lot of places to visit. Terracotta Warriors and Horses buried for more than 2000 years is definitely a must-see. After that, take a stroll or rent a bike on the Ancient City Wall, the largest and best-preserved ancient city wall in China, to enjoy panoramic views of modern Xi’an. Then try some local snacks at the bustling and lively Muslim Quarter. On the next day, you can go to visit Da Cien Temple and Giant Wild Goose Pagoda to feel the Buddhist culture, then get a deeper understanding of the past of this city in Shaanxi History Museum. If you are interested in mountain climbing, don’t miss the challenging Mount Huashan which is famous for lofty peaks and steep paths. If you have other ideas or questions about a Xian tour, please feel free to contact us. We are also specialized in customized tours according to your own requirements, interests, travelling budgets, etc.

How to Get to Giant Wild Goose Pagoda

Located in the southern Xi’an city, it needs about 30 mins to get to Giant Goose Pagoda from the center of Xi’an by taxi. And also, you can also take subway Line 3 and 4 or public buses to get there.

If you want to get rid of hustle of public transportation and troublesome navigation, you can book a private tour package which covers sightseeing, dining and transfer from us. Our local tour guide and driver will escort you to Giant Wild Goose Pagoda with speed and convenience, and take care of all the details. You just need to focus on sightseeing. 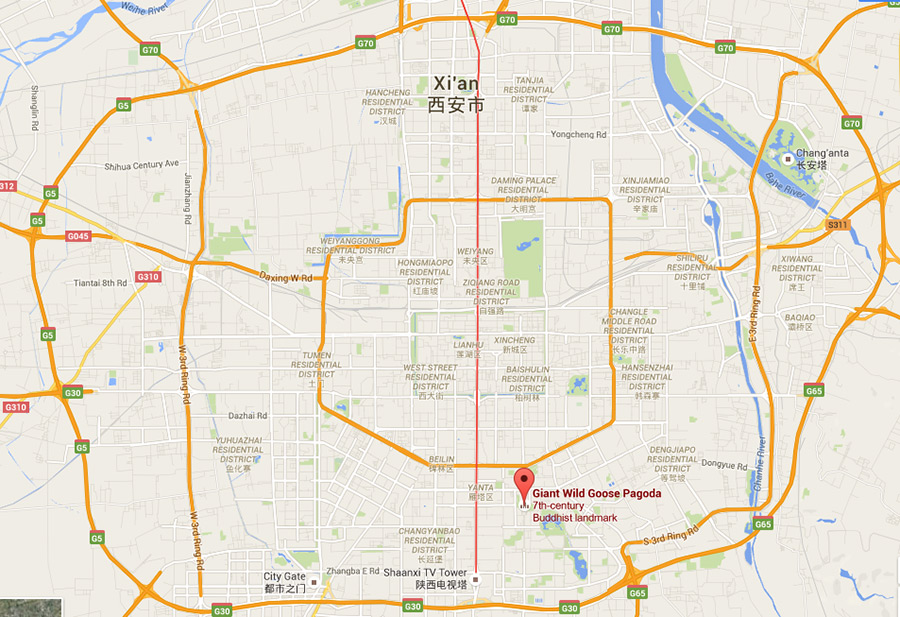 1. It is suggested go to the north square in advance if you want to appreciate the night view of the music fountain, since there may be many people.

2. Watch out the steps while climbing up in the pagoda.

Thanks for your question. The fountain show usually starts at 8:30pm. Please note It is not available in rainy and extreme-weather days.