Located at the northeastern Part of China, Harbin has a high latitude. The climate of Harbin is Temperate Continental Monsoon Climate, thus Harbin has distinctive seasons. The most obvious feature of Harbin is its long and cold winter, and short rainy summer. Generally, Harbin’s temperature is lower than most places of China. The average monthly temperature of Harbin over the year ranges from -25℃ (-77℉) to 29℃ (84.2℉). The mean max temperature in a year varies from -14℃(57.2℉) to 29℃(84.2℉), and the mean min temperature varies from -25℃(77℉) to 20℃(68℉). The coldest temperature in record in Harbin is -37.7℃(99.86℉). You can image how cold it is in Harbin’s winter. You can check more about Harbin Temperature.

The mean precipitation of Harbin in a year is about 569.1 mm, focusing on June to August. The snow period is mainly from November to next Jane. In other several months of winter, Harbin also see snowy days. Harbin’s average AQI in a year ranges from 38 to 115, suggesting the air quality of Harbin is generally good in a year. You can check the following information to know more about Harbin weather to better plan your Harbin tour.

Reputed as 'Ice City', Harbin is famous for its International Ice and Snow Festival. This festival usually opens in 5th, January. However, the relevant celebrations often begin in late November. Winter is the tourism season of Harbin, people could take part in various kinds of activities. Every year, Harbin attracts tens of thousands of tourists in Winter. As most travellers would like to enjoy the winter of Harbin, so it is advised to visit Harbin from late November to early March of next year. Of course, you could also visit Harbin in Summer (July to August), then you can have a comfortable summer time.

Harbin has four distinctive seasons: long and cold Winter, rainy and warm Summer, windy and rainy Spring and cool and windy Autumn. Generally, the division of seasons in Harbin is different from what most places in mainland China. In Harbin, Spring is from April to June, Summer is from July to August, Autumn is from September to October, and Winter is from November to the next March. You can see features and activities of each season as followings.


Harbin Winter (Harbin Ski Season): November ~ Next March
Winter is the best time to visit Harbin, during which the mean min temperature ranges from -25℃(-13℉) to -9℃(15.8℉). Among which, January is the coldest month in a year. In winter, Harbin is dry, cold and windy. Meanwhile, it always sees snowy days.
What to Wear
Winter is the coldest time in a year, so you need to be prepared to keep yourself warm. Therefore, you have to wear thermal underwear, sweater, fleece series and waterproof jacket. Cold-proof shoes with thick sole, like a pari of hiking boots is advised to wear so that you could play or work flexibly. You can also wear wool cap which can keep your ears warm. In addition, you should also wear mask and wind-proof scarf. All in all, just wear as warm as you can, and wear multiple layers, so you can take them off as you heat up.
Seasonal Activities
Winter is the best time to visit Harbin, during which the International Ice and Snow Festival is opened. This is the most important and the biggest festival of Harbin. During this festival, you will feast your eyes on the arts of ice and snow. You will see enormous ice sculptures in Harbin Ice and Snow World and Stalin Park, huge and delicate snow sculptures in Sun Island, and Ice Lantern Show in Zhaolin Park.
China Snow Town and Yabuli Ski Resort are also two must-go places for you. The snow in China Snow Town can up to about 2 meters. Snow looks like milk scream and hangs from the eaves to the ground, forming a unique scene of "snow curtains".
Yabuli Ski Resort is famous for its longest ski trail in Asia. It is one of the most popular ski resorts in China and full of professional equipment and multiple items to provide a wonderful skiing experience for ski enthusiasts in winter.
Related Useful Links:
Harbin Weather in January | Harbin Weather in February | Harbin Weather in November | Harbin Weather in December

Harbin Spring: April ~ June
Spring is usually dry and windy in Harbin. Meanwhile, the weather changes from time to time, and and the temperature difference in different months can up to 10℃(50℉). You are expected to see cold morning but a warm afternoon. The temperature gradually rises in this season.
What to Wear
You can take thermal underwear, sweater and a thin cotton clothes. As the weather is changeable even in one day, so it is advised to wear multiple layers, so you can easily take off when you heat up. Taking a wind-proof scarf is also advised.
Seasonal Activities
As the temperature is rising in Spring, there are beautiful Spring scenery in Harbin you can see. Most people choose to look for the Spring in outdoors. They may go to Stalin Park, Zhaolin Park, Jiuzhan Park, etc to appreciate the winter jasmine, peach blossom, lilacs, etc. Here you can see what a true Spring in northern China is like. 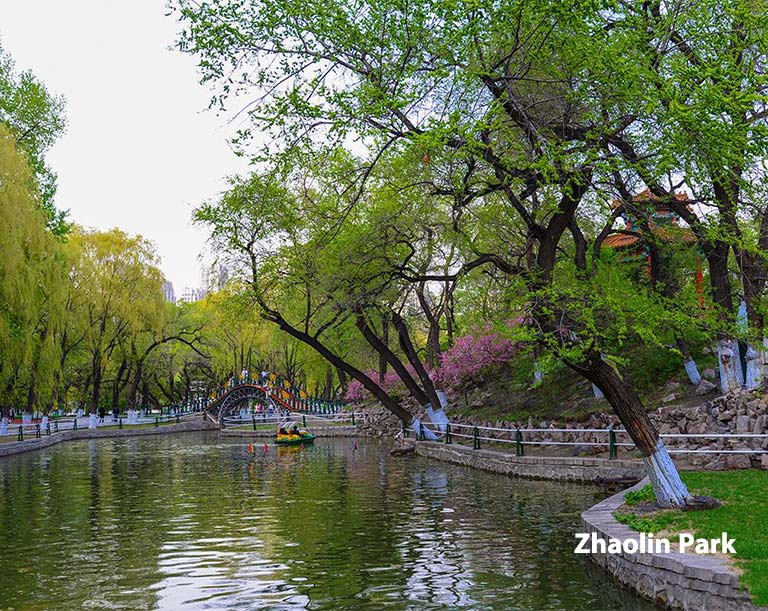 Harbin Summer: July ~ August
Summer is also the best time to visit Harbin, because the mean temperature in Harbin’s Summer ranges from 22℃(71.6℉) to 24℃(75.2℉). Here can be a summer resort for you. Meanwhile, there may also be many rainy days in Summer. The weather in Summer is so comfortable that most tourists choose to spend the Summer in Harbin.
What to Wear
You could wear T-shirt, shorts, skirt, shirt and any other thin clothes during day time. However, the temperature at night and morning may be cooler, so you can also take a wind coat or any other thin overcoat. Furthermore, you need to take umbrella or raincoat in case of unexpected rainy days. Water-proof sneakers can also be needed for you.
Seasonal Activities
In Summer, you could visit the Sun Island to see the Ice and Snow Gallery, Sun Waterfall, Squirrel Island, etc. Harbin Polarland and Siberian Tiger Park are also good choices for you and your family to play together. Harbin Flood Control Memorial Tower and Lao Daowai are suitable for you to explore the history of Harbin.
At night, you could wander along the Zhongyang Pedestrian Street (Central Street) to appreciate the beautiful night view of those European-styled buildings in each side of the street. You can also catch the charming beauty of St. Sophia Cathedral at night. 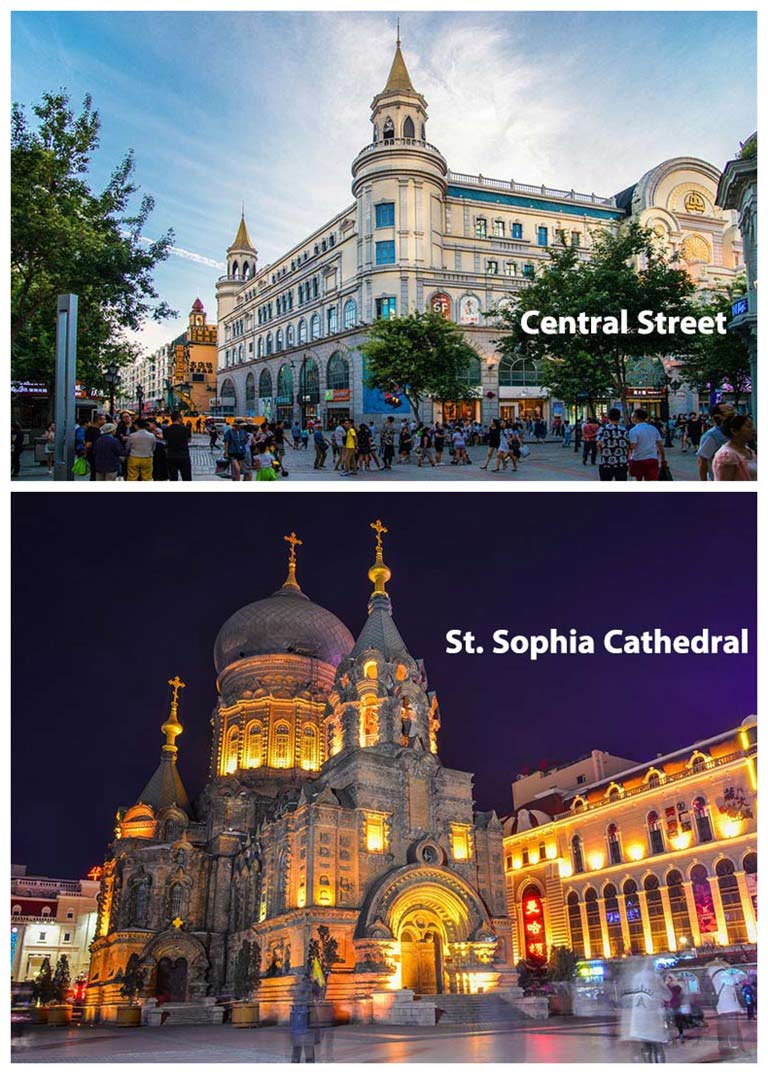 Harbin Autumn: September ~ October
In Autumn, Harbin’s rainfall obviously reduces. Like Spring, the weather of Autumn in Harbin is also changeable with sharp temperature changes during day and night. The mean temperature in Autumn decreases from 16℃(60.8℉) to 7℃(44.6℉). In October, there will be more rainy days, and the temperature gradually reduces.
What to Wear
In Autumn, you could wear shirt and wind-proof overcoat. Sometimes you may also need thin sweater. You also need to prepare the umbrella in case of unexpected rainy days.
Seasonal Activities
In this season, you could have the same activities as in the summer. Furthermore, you could explore the Autumn scenery in natural parks, such as Stalin Park, Zhaolin Park, Jiuzhan Park, etc. 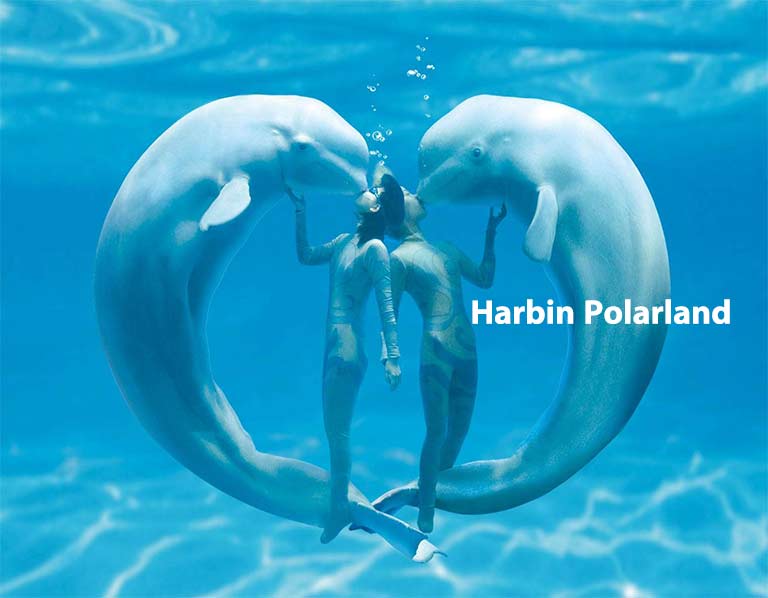 Harbin Weather in May

You may be confused about how to plan your Harbin tour, then we can give you some suggestion. Usually, most travellers spend about 2 to 4 days when touring in Harbin, covering 2 days catching highlights of downtown area of Harbin city and 1 to 2 days exploring the hot destinations around Harbin city. In Harbin’s downtown area, you could enjoy those delicate masterpiece of artists, such as ice lantern show in Zhaolin Park, Ice and Snow World, Sun Island Scenic Resort, etc. You can also appreciate St. Sophia Cathedral, Zhongyang Pedestrian Street, and Laodaowai Baroque Styled Architectures, etc. After visiting downtown area of Harbin, travellers can spend one full day to the Yabuli Ski Resort, a ski resort that is about 220 km away from Harbin, to experience the most professional skiing. Otherwise, they will spend one full day to the China Snow Town, the no.1 snow town in China that is about 280 km away from Harbin, to see the paradise-like snowscape. Some travellers may combine the trip in Harbin downtown area with these two destinations.
>>5 Days Harbin Winter Tour with Yabuli Ski Resort
>>5 Days Charming Harbin & China Snow Town Winter Tour

You may be confused about how to plan a Harbin tour and you may worry about the transfers along your tour. Why not contact us? China Discovery could offer you the highly convenient service of private transfer, by which you could save time and free from worry. Our private drivers will escort you along your whole trip and you don’t need to transfer for several times. Meanwhile, our local tour guide will guide you to have an in-depth tour in Harbin. If you have your own interests and concerns about the trip, you could just contact our private consultant. They will help you to make your own tour plan. In addition, you could just ask us if you want to travel to any other places in China. We will try our best to meet your needs.

Top 3 Harbin tours chosen by most customers to explore Harbin in the best way. Check the detailed itinerary,or tailor your own trip now with us. 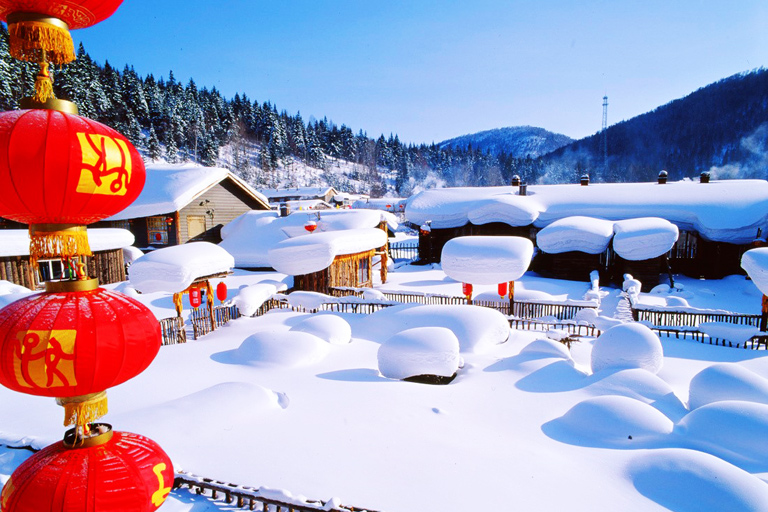 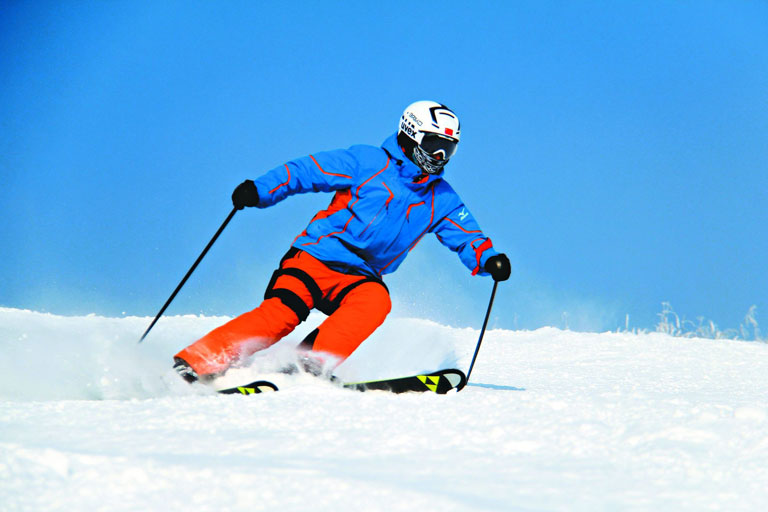