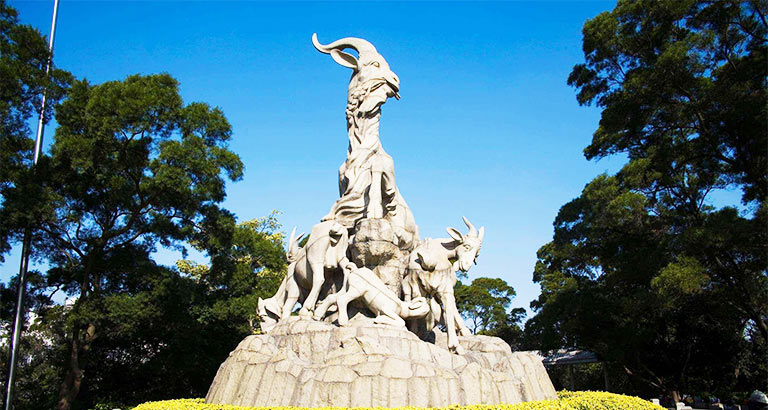 Yuexiu Park is the largest comprehensive park in Guangzhou. This park is built on the Yuexiu Hill which has been a famous scenic spot since Qin Dynasty (221BC-206BC). Featuring with both historical and natural scenic spots, it is worth visiting.

Tickets: Free for the park, but some scenic spots inside the park need charge

Covering an area of 690,000 square meters, Yuexiu Park is the largest comprehensive park in Guangzhou. This park is built on the Yuexiu Hill which has been a famous scenic spots since Qin Dynasty (221BC-206BC). During The Republic of China period (1912-1949), the then president Sun Yat-sen proposed to build Yuexiu Park on the basis of Yuexiu Hill. However, this imagination didn’t come true until 1949.

Yuexiu Park has always been one of the eight tourist attractions in Guangzhou, no matter how other 7 attractions has changed over time. There are both historical and natural scenic spots in Yuexiu Park. While appreciating these historical sites, you may have a vivid understanding of the history of 2,000 years from Guangzhou’s ancient times to the last century. You will know why Guangzhou is called “City of the Five Rams” by visiting Five Rams Statue. With a deep exploration of Ming Dynasty Wall, Zhenhai Tower, and Sun Yat-sen Monument, you will have a deep impression about Yuexiu Park.

Actually, Yuexiu Park is a vast park with 7 hills, 3 man-made lakes with luxuriant vegetation, making you step into a beautiful fairyland. Every morning, there are many locals meditating and playing Tai Chi in the park from which you can get a glimpse of Guangzhou local life.

Yuexiu park is so comfortable and beautiful that sees many famous people coming for visiting. Chairman Mao and other leaders of China went to Yuexiu Park for several times. In addition, some heads of state from foreign countries such as Nixon, Kim Il-sung and others also went to this park.

Yuexiu Park is famous for 4 scenic spots which are all historical sites. They have already been landmarks of Guangzhou that can not be missed by anyone who comes to Guangzhou. You could touch the history of old Guangzhou when watch these historical sites.

Five Rams Statue is the symbol of Guangzhou city. Built in 1959, Five Rams Statue adopts elements of a Chinese legend. It is said that 5 immortals, riding 5 goats with seed-heads in mouths, came to Guangzhou in the ancient time. The 5 immortals gave the seed-heads to Guangzhou people and then left. However, the 5 goats stayed and changed into stones. This is the reason why Guangzhou city is also called “City of the Five Rams”.

The Five Rams Statue is 11 meters high and carved with over 130 granites. The biggest goat is a billy goat which is in the center and has a seed-heads in its mouth. It raises head and looks far into the distance, suggesting the Guangzhou people’s striving for prosperous life. Other 4 goats around this big goat are separately eating grass, taking milk from its mother, feeding its baby and playing, lively and cute.

The sixteenth Asian Games was held in Guangzhou. Its emblem combined the image of this statue with torch, showing both the spirit of Asian Games and best wishes of Guangzhou people. 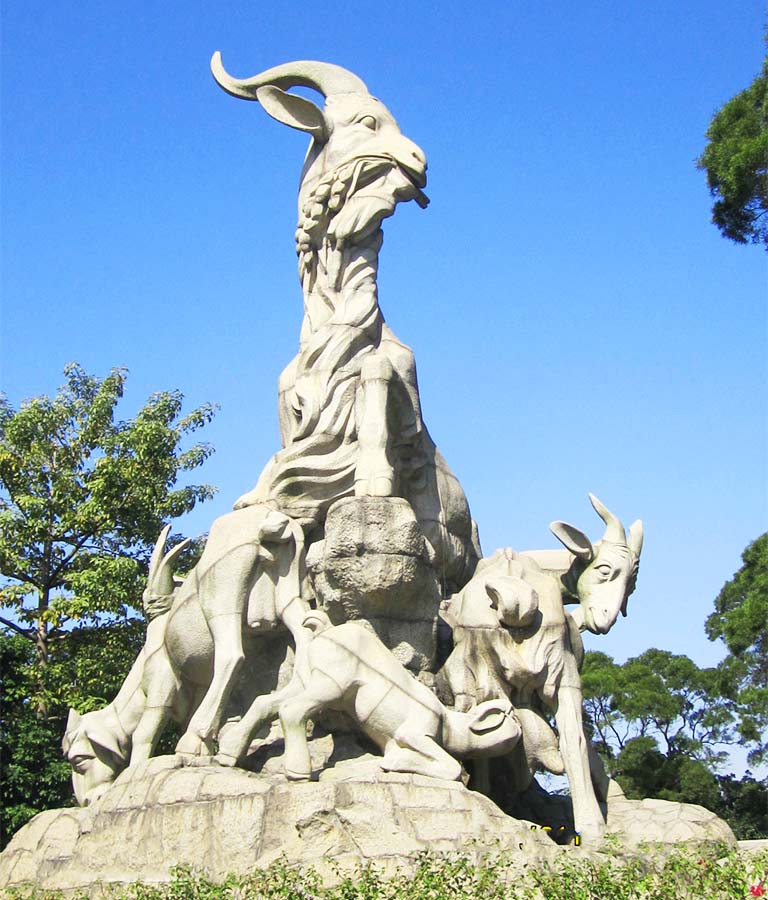 Tickets: ¥10 for per ticket

Zhenhai Tower, also called Five Stairs Tower, is one of the oldest landmarks of Guangzhou. It is 28 meters high and 31 meters wide. On the right side of the building are 12 old guns. The tower is well-preserved and has grandiose imposing manner. In 1928, it was rebuilt from wooden structure to concrete structure.

Nowadays, it houses one of the exhibition areas of Guangzhou Museum, in which stores local historical materials. It is also used for holding exhibition and doing scientific research. From the top of the Zhenhai Tower, you can see the overall view of the beautiful city. It would be very cool to experience. 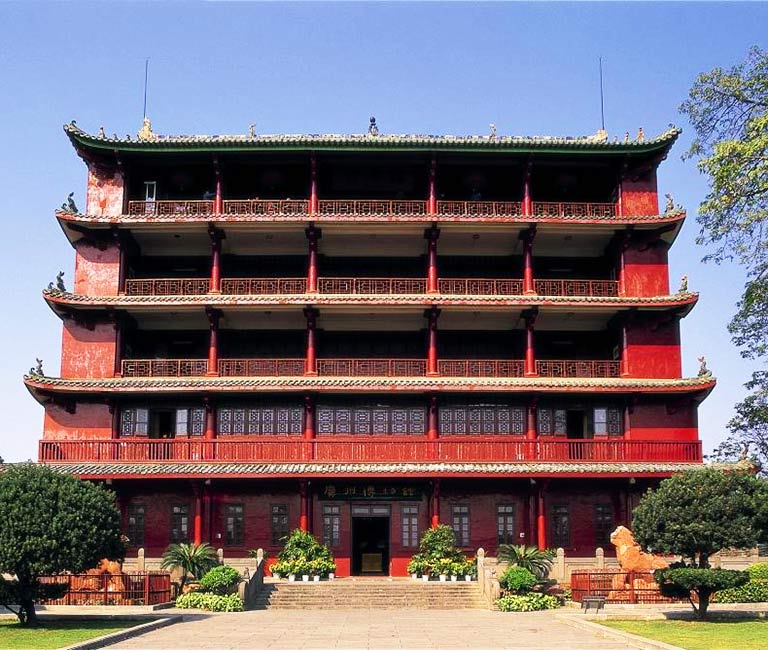 Sun Yat-sen Monument - A Monument Can Be Climbed Up

Sun Yat-sen Monument is situated in the southernmost part of Yuexiu mountains’ main hill called Yue Jing. The Sun Yat-sen Memorial Hall is located at the south of old Guangzhou city. This way of design conforms to the traditional Chinese culture. The monument was built in 1929 in memorize of the great democratic revolutionists - Sun Yat-sen who spared no efforts to save China through all his life. He has profound impacts on Chinese society and admired by many Chinese people.

Sun Yat-sen Monument is 37 meters high and has a square shape with a pointed tip. You have to climb up from the bottom of the arc gate. There are fences around the base of the monument. You can view the monument either from the fences or from the top. However, you need to climb up the stairways inside to reach the top. There are windows in every storey inside the monument, from which you could see outside. Around the base of the monument are 26 sculptures of rams suggesting “City of the Five Rams” (Guangzhou). In front of the Monument is a marble of 7m high and 4m wide, engraving Sun Yat-sen’s testament. These words show Sun’s devotion to the future of China. 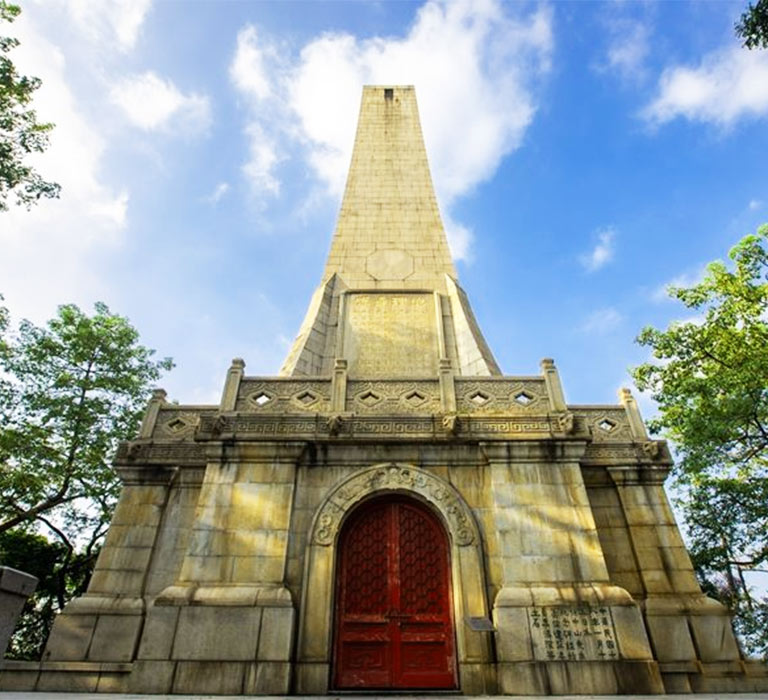 The Ming Dynasty Wall in Yuexiu Park is the only one existing ancient wall in Guangzhou city . It was built in the early Ming Dynasty (1368 - 1644) and is one of the three cultural relics at that time. As it has more than 600 years’ history, many parts of the wall are damaged. The part of wall near the Zhenhai Tower is the most well - maintained. Nowadays, it is totally 1,137 meters long. It is said that the local government will restore some parts of the wall so that the total length will be about 1,500 meters.

The most amazing thing you will find is several old trees growing out from the wall. The roots of these trees wrap the wall which can not be seen on ancient wall of other places. Many tourists come here for taking photos. You can also see locals doing exercises on the wall. 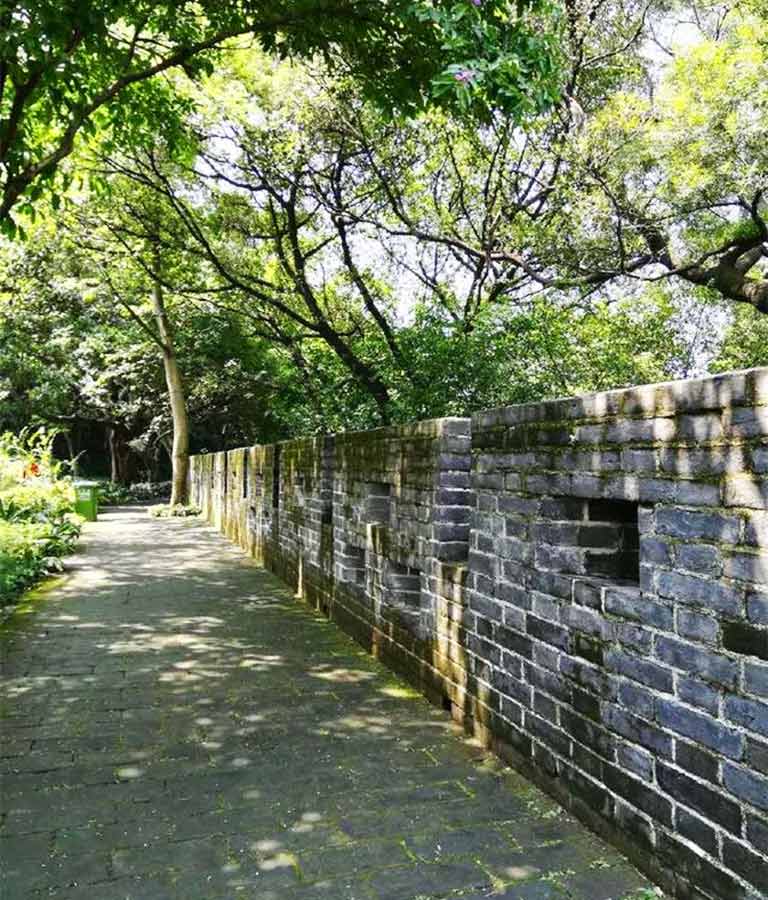 Most people go this way of touring, and you could choose this kind of route for saving time. By this way, you could travel to the 4 most popular scenic spots in Yuexiu Park quickly.

Extension Route (About Half a Day)

There are also many other beautiful tourist attractions in Yuexiu Park. If you have enough time, you could choose this one. The park provides the service of sightseeing bus, by which you could appreciate the scenic spots easily. It is ¥10 per ticket. More details about the bus, please contact us. 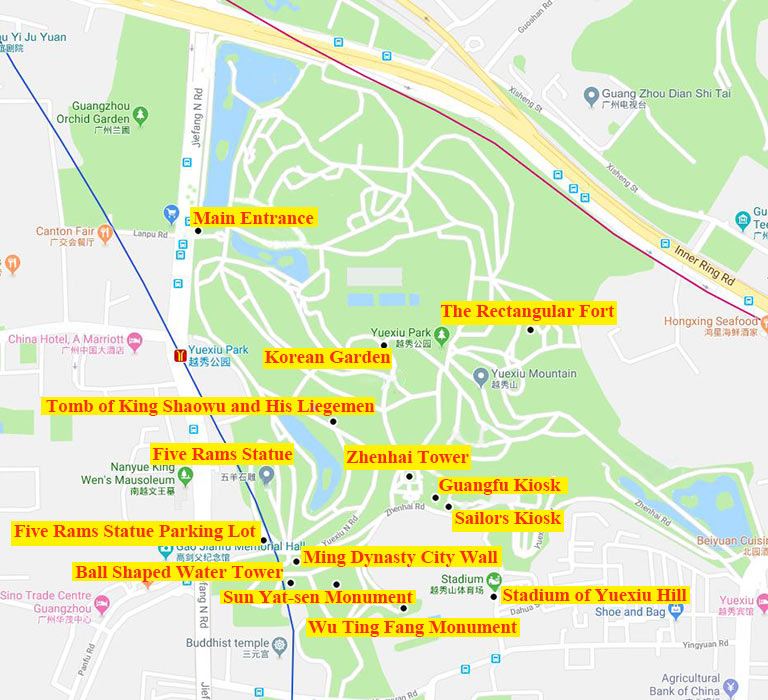 Near the Yuexiu Park, there are several famous tourist attractions, including Sun Yat-sen Memorial Hall, Temple of the Six Banyan Trees, Museum of the Mausoleum of the Nanyue King and Chen Clan Ancestral Hall.

Sun Yat-sen Memorial Hall (10 minutes walking distance) is the most used place for gathering or performance in Guangzhou. It was built during 1929~1931 in memory of the great revolutionist Sun Yat-sen. Sun Yat-sen Memorial Hall itself is a traditional Chinese building with significant outlooks and delicate interior designs. At every corner, you will find the spectacular style of Chinese architecture.

Temple of the Six Banyan Trees (About 2km), also Liurong Temple, is one of the best four Buddhist temples in Guangzhou with about 1500 years’ history. Its Flower Pagoda is the oldest landmark of Guangzhou City.

Museum of the Mausoleum of the Nanyue King (About 500m) houses the 2000-year-old tomb of the Nanyue King Zhao Mo (the second Nanyue King) in Guangzhou. The tomb is the earliest, the largest and with the most buried objects Han Dynasty Tomb. It is also the only stone tomb made up of 750 huge stones with colorful murals in China.

You could travel in this way:

If you don't know how to schedule your trip, here is a 3 Days Guangzhou Short Stay Tour for you.

Where Is Yuexiu Park

Yuexiu Park is located at No. 988 Jiefang North Road, Yuexiu District, Guangzhou City, Guangdong Province, China. It is in the downtown area, so you can easily arrive at there by bus, subway or taxi. The Main Entrance of the park is near the, you could take the metro 2 to take off at the YUexiu Park metro station. The Main Entrance is about 300m from the station. 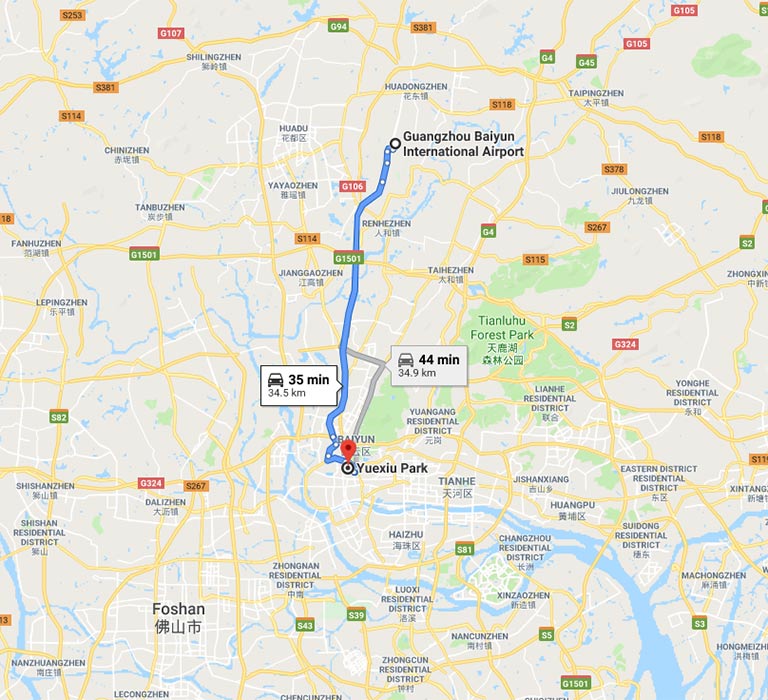 If you come to take part in the Canton Fair, here is a 6 Days Canton Fair & Guangzhou Highlights Tour that covers most of the attractions mentioned above for your reference.

1.As the park is so large, and you will have a long walking experience, we advise you to wear comfortable shoes. By the way, the park provides the service of sightseeing bus, you can also take it to have a tour inside the park.

2.If you go there during Spring Festival, you will have a look at beautiful lantern exhibition held by Yuexiu Park which is so fascinating. In addition, you could see magnificent flower exhibitions during spring and autumn, and the specific time is different in every year.

If you are planning to visit Yuexiu Park, you could travel with China Discovery. Our private transfer service will save your time for waiting for the vehicles and other parts along the road. Besides, our professional local guide will give you wonderful introduction about those highlights to let you enjoy the travel. You just have a relaxing rest on the private car and focus on the highlights.

If you have your own special idea and interest of visiting Guangzhou without tiring schedule arranging and vehicle changing, please feel free to contact us and we will offer you a personal tailor-made trip! 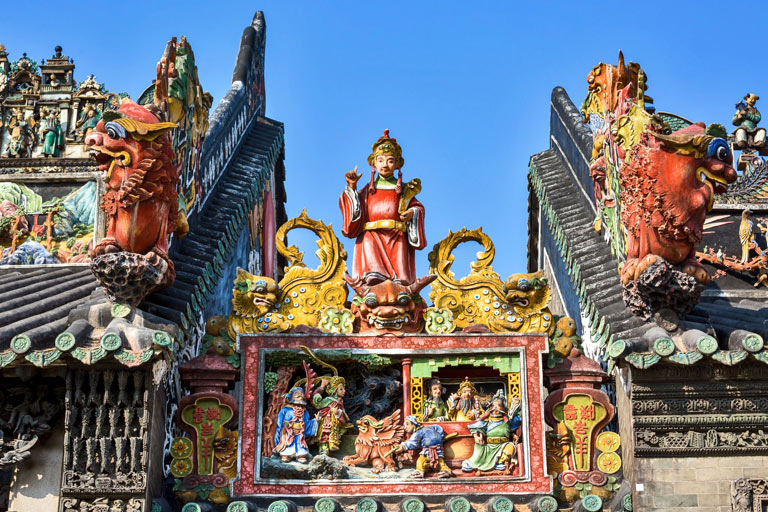