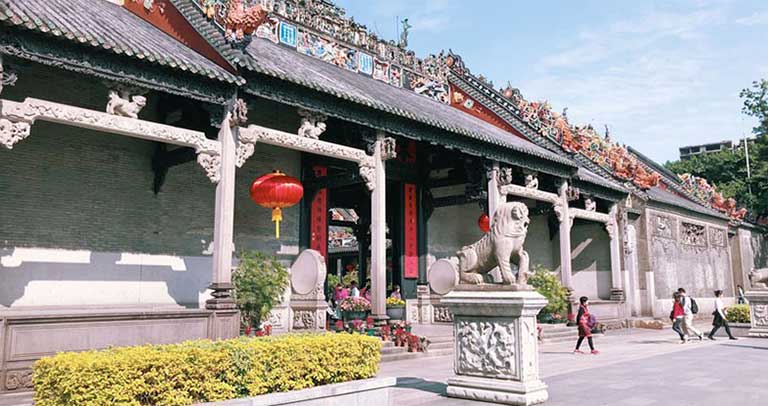 Praised as the pearl of Lingnan architectural art, Chen Clan Ancestral Hall is the most complete, largest, and the most magnificently decorated ancestral hall in Guangzhou. This palace of art could be a visual feast with seven wonders - wood carving, stone carving, brick carving, pottery figures, stucco relief, iron and copper casting and colored drawing.

The Chen Clan Ancestral Hall or Chen Clan Academy is an academic temple in Guangzhou, which is praised as the Pearl of Lingnan architectural art. The temple also functions as a museum under the auspices of Guangdong Folk Arts Museum, exhibiting a variety of folk arts and crafts. The buildings are decorated with wood carving, stone carving, brick carving, pottery, stucco relief, iron and copper casting and colored drawing, which have been praised as “seven classic decorations of Lingnan”. All of these decorations tell you stories from traditional dramas, drawing a big picture to show you charming Chinese culture and the talents of ancient Chinese craftsmen.

In 1988, it was added in the list of "Cultural Relics of National Importance under the Protection of the State". In 2002 and 2011 it was chosen as one of the Top Eight Sights of Guangzhou. Filled with strong cultural and artistic features, Chen Clan Ancestral Hall will give you a ticket to a biggest family in Guangzhou during the Qing Dynasty (1644~1912).

Why It Is Called “Chen Clan Ancestral Hall”

The various Chinese names vividly tell us how Chinese culture inherits from generation to generation. It is said that the same surname is always a proof of the same ancestor. ‘Chen’ is one of the surnames in China, and it belonged to a large group of people during the late 19th century. In 1888, Chen Lanbin, the first proctor of Chinese students studying abroad and the first China's envoy in US, and other 47 famous Chen clans called on building Chen Clan Ancestral Hall in Guangzhou. Anyone who has the surname of Chen will be allowed to lay the ancestral tablets in the Chen Clan Ancestral Hall once you have paid for it. The ancestral hall was designed for the accommodation of their juniors in Guangzhou for preparing the Chinese imperial examinations. Of course, those who paid for the hall could also get accommodation here when they come to Guangzhou. Chen clans from 72 counties of Guangdong answered the call.

During the time of building, one of the 48 Chen clans ranked the third in the highest level of imperial examination which brought his family good reputation and wealth. This encouraged the Chen clans to invest more than before for the project. In 1894, this ancestral hall was totally finished. 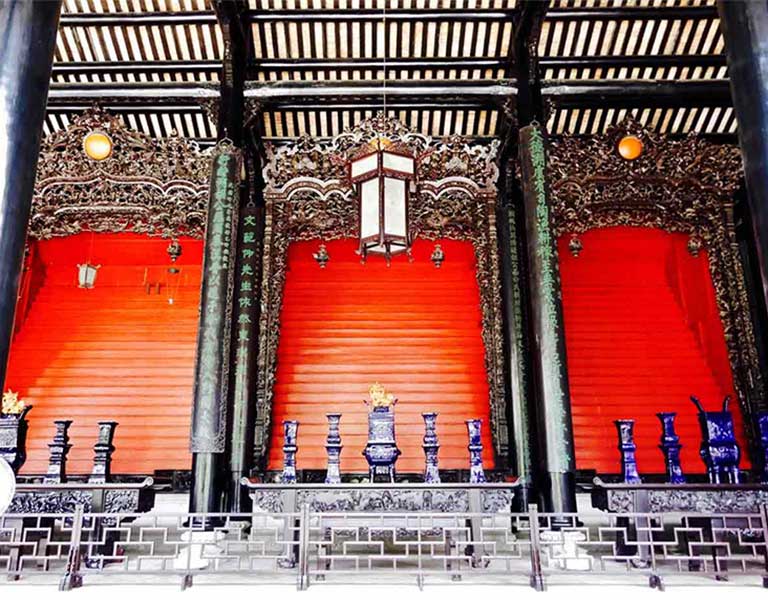 Why It Is Also Called “Chen Clan Academy”

The government of Qing Dynasty (1644~1912) insisted that ancestral hall should be built on the basis of consanguinity. Chen Clan Ancestral Hall connected a large group of people with the surname of “Chen”, and most of them had no blood relation. The government worried that this kind of ancestral hall may be a threat to the rule of country. Considering this situation, the Chen Clan Ancestral Hall was called “Chen Clan Academy” and was built near some academies. By this way, it luckily admitted by the government. On the top of the gate of the Head-entrance hangs a tablet with words 陳氏書院, meaning "Chen Clan Academy".

Later Chen Clan Ancestral Hall was changed into the Chen Clan’s Industry College, and then middle schools afterward. At modern times, the academy functions as a folk art museum of Guangdong. 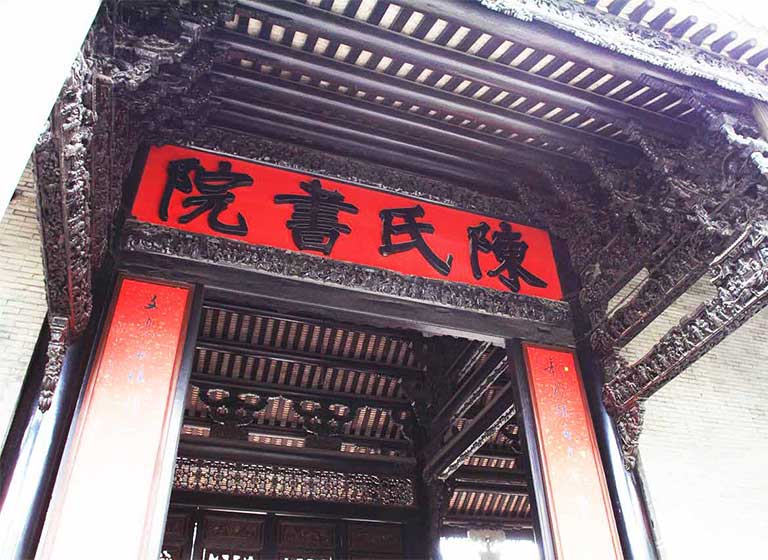 Covering 13,200 square meters, the Chen Clan Ancestral Hall consists of 19 buildings with nine halls and six courtyards. Buildings are separated with "Qingyun alleys" and connected with corridors. The academy rides north to south in a symmetric pattern which totally conforms to the traditional Chinese architectural structure. The main buildings lying on the main axis are the Head-entrance , the Gathering Hall and the Back Hall.The deeper you walk into the academy, the higher you will stand on. This way of design means that you will move up to higher positions in your career.

On the top of the gate of the Head-entrance hangs a tablet with words 陳氏書院, meaning "Chen Clan Academy". On each side of the entrance gate stands a 2.25 meter high stone drum with diameter of 1.4 meter. In the Qing dynasty, only those dignitaries have the right to use this kind of drum next to gate.

The Gathering Hall was for meeting and worship of the Chen clans and now it is an ancestral hall. It is 27.84 meters wide and 16.7 meters deep with 21 main beams and 6 carved stone columns. In front of the hall lies a stone gazebo surrounded by stone balustrades. Inside the hall sit twelve engraved folding screens.

In the Back Hall, Memorial tablets of ancestors were placed on a 21-step wooden shelves, which was once used for worship of ancestors. In the rooms sit 7-meter-high wooden-carved niche covers. 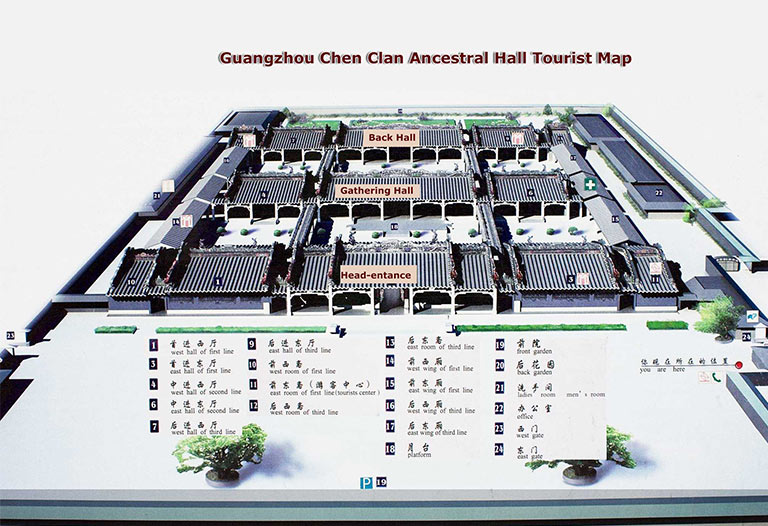 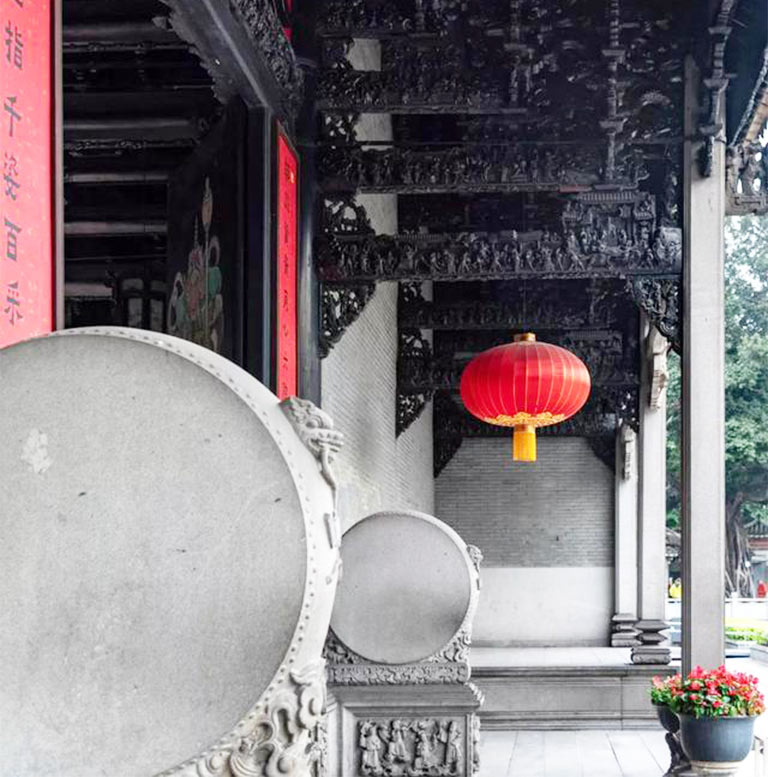 What to See in Chen Clan Ancestral Hall?

The buildings in the Chen Clan Ancestral Hall are fully decorated with wood carving, stone carving, brick carving, pottery, stucco relief, iron and copper casting and colored drawing. The content of these decoration are mostly flowers, birds, Cantonese fruits and scenes in traditional dramas. Some of the decorations are even the combination of Chinese and western culture, which shows the social status at that time.

This academy adopted all of the best materials, which took a large amount of money. No matter it can still be in the original shape over 100 years. Once stepping into the hall, every part of the academy tells you a story about a big family, even about the past of Guangzhou.

The 12 engraved folding screens inside the gathering hall is the master work of the Guangzhou wood carvings, featuring with sharp, free, and elegant style. The composition of the picture applies a zigzag way, so that a complete story can be read from the top of a screen to the bottom. These folding screens are engraved with from Tang Dynasty (618~907 CE) to the Southern Song Dynasty (1127~1279).

While looking at the stone lions, gazebo, stylobate, steps,handrail and the like, you must be surprised at the exquisite stone carvings. The gazebo in front of the gathering hall uses various techniques such as , , and so on. The handrails of the gazebo are carved out with images of different fruits, flowers and birds. The chapiters of the handrails are hollowed out with pictures of Lingnan fruits such as pineapple, carambola, peach and else. This kind of images shows the chen clans’ pious worship to their ancestors and gods.

On the outside wall, corbel and eaves, you will see the brick carving. The outside wall on the right side of the hall is decorated with 6 big brick carvings made by black brick from Dongguan. They are so big that rarely can be seen at that time. Two of them are 1.75m high and 3.6m wide. One of the six brick carvings is the image of “Liu Qing taming the fiery steed” which shows a senior general named Liu Qing tamed a fiery steel to prevent his country from a war led by a nearby country. The figures on it are so lively that every person has a distinguished facial expression and pose. 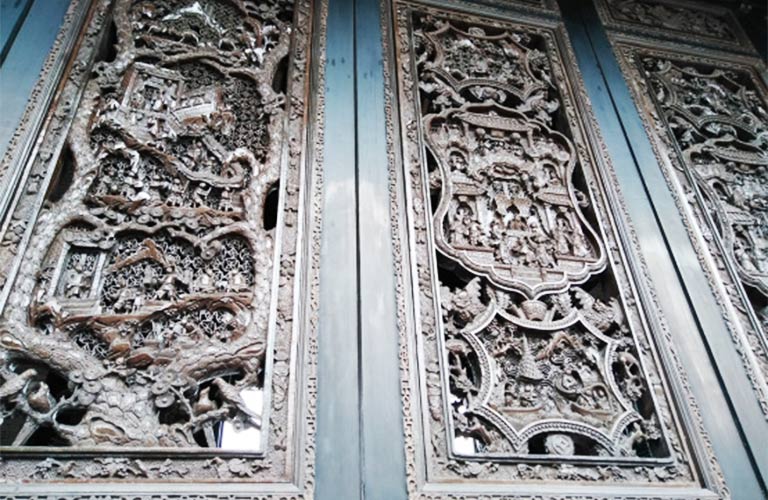 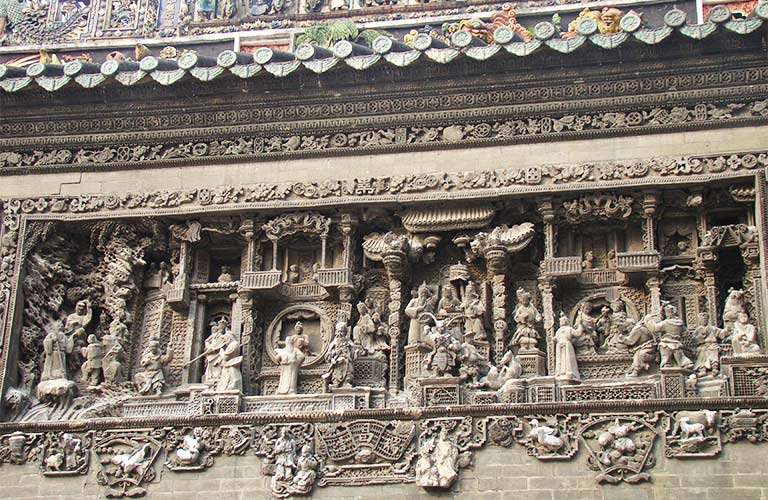 The principal ridges of the Chen Clan Ancestral Hall are decorated with 11 strips of pottery cresting, the amount and scale of which reflect the wealth of chen clans at that time. The cresting of the Gathering Hall is 27m long and 2.9m high, with a total of 224 figures on it, which is the largest scale of cresting in Chen Clan Ancestral Hall. These figures include the eight immortals, Li Jing and other characters from the Chinese legend. You will be amazed at so many different images.

The most unforgettable thing in Chen Clan Ancestral is the colorful roof. It is the Stucco relief that widely used in architectural decoration of PRD(Pearl River Delta). It is mainly used in the foundation of ridges, vertical ridges, gables, wings and so on. The accumulated length of the stucco relief in the Chen Clan Ancestral Hall is 2,562m. The subjects of these stucco reliefs are so popular at then, including myths and legends, historical stories, characters in traditional dramas and else. 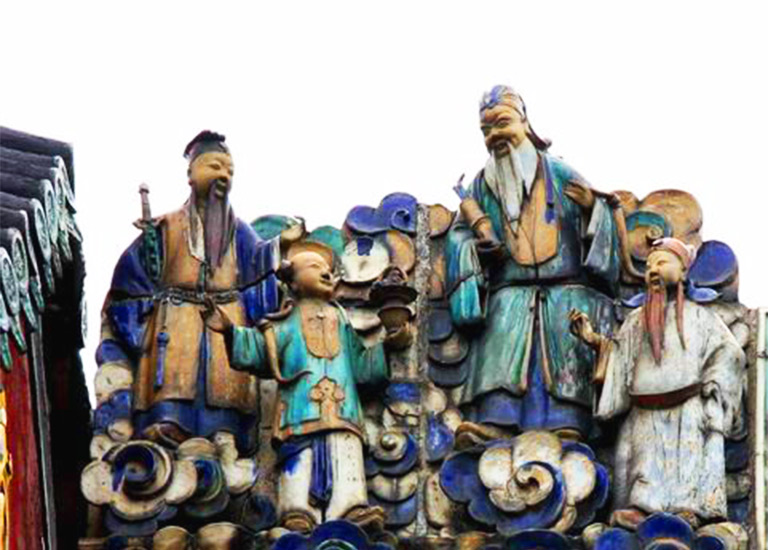 The Fourth Highlight: Iron and Copper Casting and Colored Drawing

The iron casting assimilates some features of western courtyard’s architectural art, and it is applied in the gazebo in front of the gathering hall. The copper casting is mostly used on the gate of the Head Entrance. In the yards, you could also see a few copper casting statues.

The colored drawing includes the “God of Door” on the gate, and wall paintings in the western and eastern wing-rooms. These drawings vividly show scenes from traditional dramas. You can be filled with admiration to the painters’ skills once seeing these pictures.

Meanwhile, there are also many handcrafts in the Chen Clan Ancestral Hall. 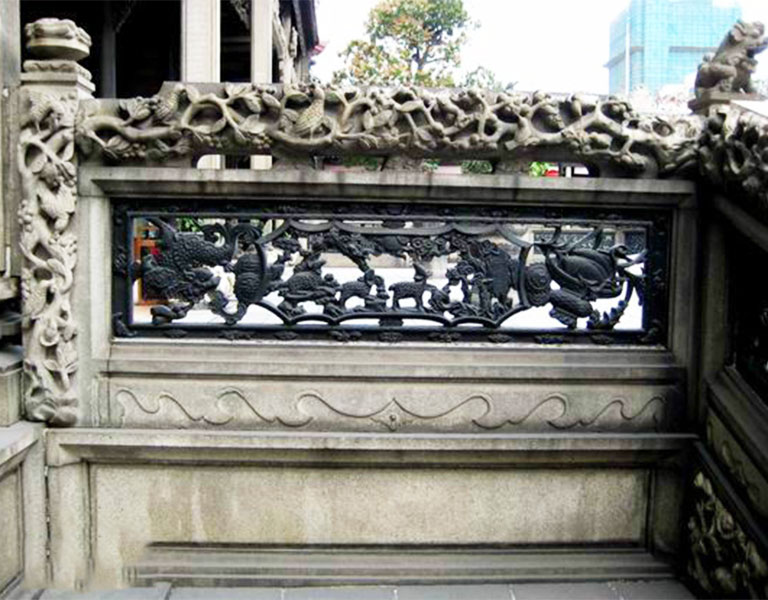 Where is Chen Clan Ancestral Hall & How to Get There?

Chen Clan Ancestral Hall is located at the No.34, En Longli, Zhongshan 7 Road, Liwan District which is also called “Xiguan’ in Chinese. It is in the downtown area. It will be very convenient if you take taxi, bus or subway to there.

If you go there by subway, you could take the metro line 1 to get off at Chen Clan Academy station, and walk out of the exit D. The Head-entrance is right near the exit. 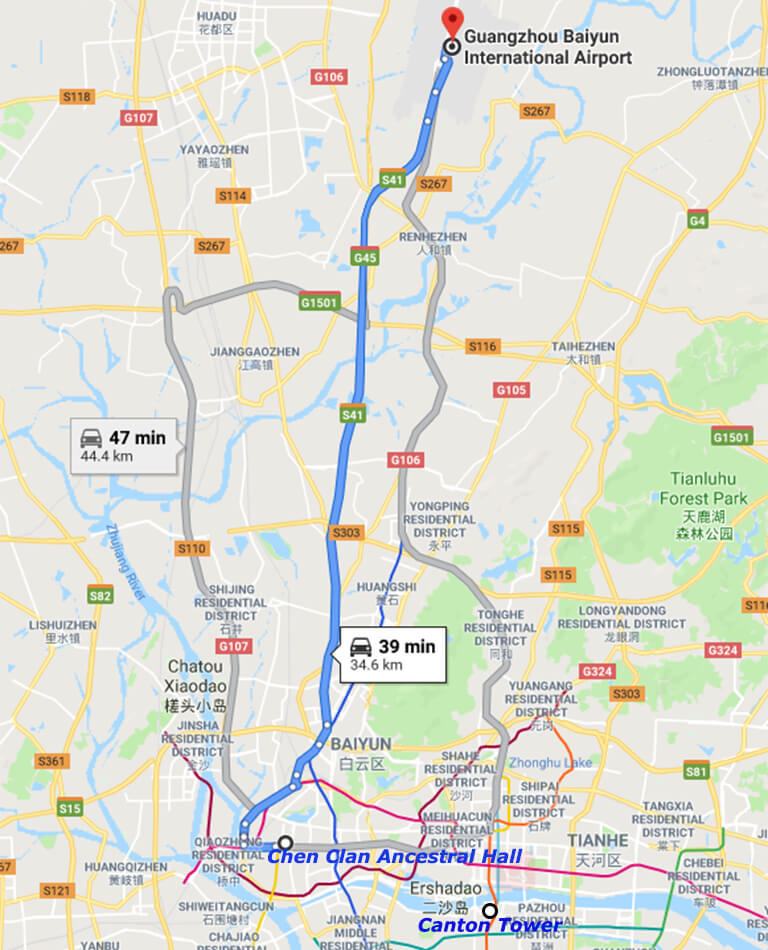 The entrance fee is ￥10 per ticket. In addition, you must take valid personal certificates (like ID Card and passport) to buy tickets.

A group of people (8 to 10)could spend ￥100 together for a guide interpreter which will help you a lot during the tour.

You can rent a tour guide equipment at the service counter, but you need to return it back before 5:00PM.

You could also listen to the interpretation by the Wechat Official Account of the Chen Clan Ancestral Hall.

The ticket will not be sold after 5:00PM.

You may be anxious about arranging the tour by yourself. Why not choose us - China Discovery - a local based China travel agency? We have private tour packages covering sightseeing, dining, accommodation and so on. Furthermore, our travel expert will help you customize your own tour to visit more places in Guangzhou. We will design your trip with the most comfortable way. All that we chase for is just your satisfaction. 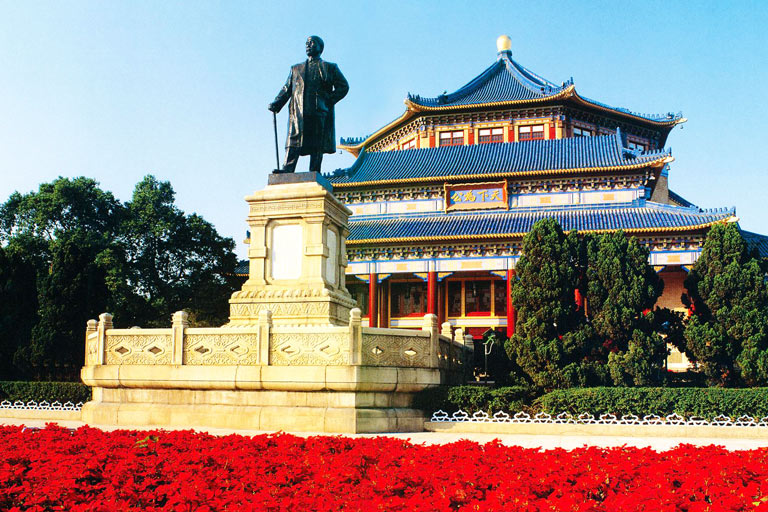