Canton Tower - A Must See Landmark in Guangzhou 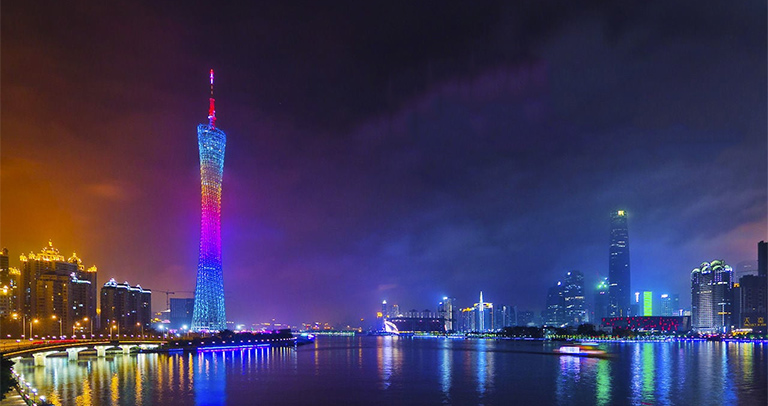 Canton Tower, also known as the Guangzhou TV & Sightseeing Tower, is the iconic tower and landmark of Guangzhou. With the height of 600 meters, it is the tallest TV tower of China and the third tallest TV tower in the world.

Best Time: All Year Round (At Dusk and Night of a Day)

Canton Tower, also known as the Guangzhou TV & Sightseeing Tower, is the iconic tower and landmark of Guangzhou. With the height of 600 meters, it is the tallest TV tower of China and the third tallest TV tower in the world. If there is only one place to go in Guangzhou, Canton Tower has to be at the top of the list. Canton Tower is also famous for its "Slim Waist" which is an architectural marvel.

Canton Tower was constructed by Guangzhou New Television Tower Group. During the process of the construction, the engineer group handled the technical problem led by the design of such slim waist and finished an outstanding work. The tower finally gained good reputation for the ability of resisting 7.8-magnitude earthquakes and the useful life of over 100 years.

As a TV tower, Canton Tower is used for transmitting the TV signal and Frequency Modulation radio signal and microwave signal. Meanwhile, Canton Tower also functions as a sightseeing place. You could have a bird’s eye view of the whole city from the Observation Deck with 448 meters high. At night, the stunning beauty of the light show on the tower must give you deep impression when you look at it from outside. If you are brave enough, the world's longest spiral staircase will give you an opportunity to walk from the height of 168 meters to 334.4 meters, ride the world’s highest Ferris wheel and experience the world’s highest sky drop game which has been listed in Guinness World Records with the name of “Highest Thrill Ride”. If you want to dine on this high building, then you will head for the revolving restaurant which can revolve every 100 minutes so that customers from any direction could have a look at the outside. 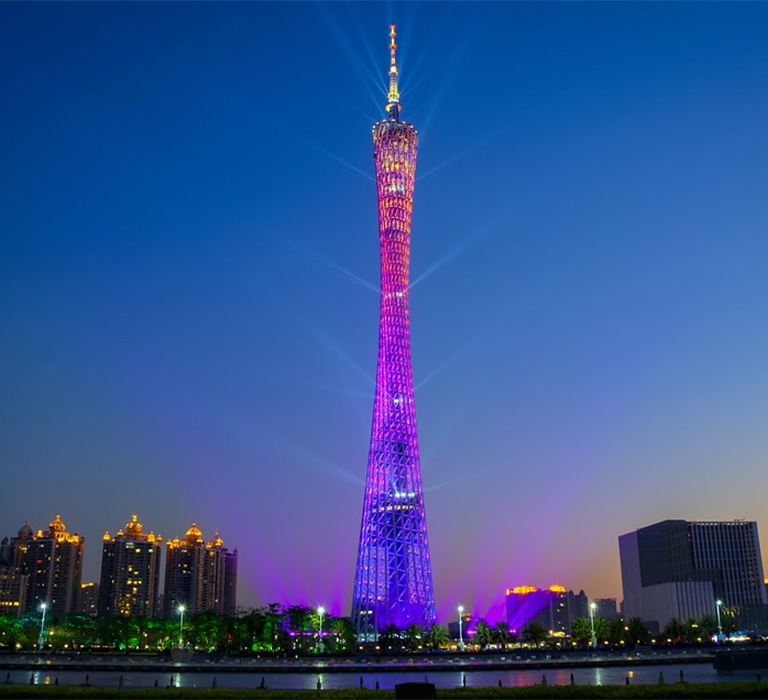 How can Canton Tower have such a “female waist”? The form, volume and structure of the tower are generated by two ellipses, one at foundation level and the other at a horizontal plane. These two ellipses are rotated relative to another. The tightening caused by the rotation between the two ellipses forms a "waist" and a densification of material halfway up the tower.

In local people’s eyes, Canton Tower is like a beautiful female with slim waist standing on the bank of the Pearl River. They are proud of this tower, and nearly everyone talking with you would ask if you have already been to Canton Tower. 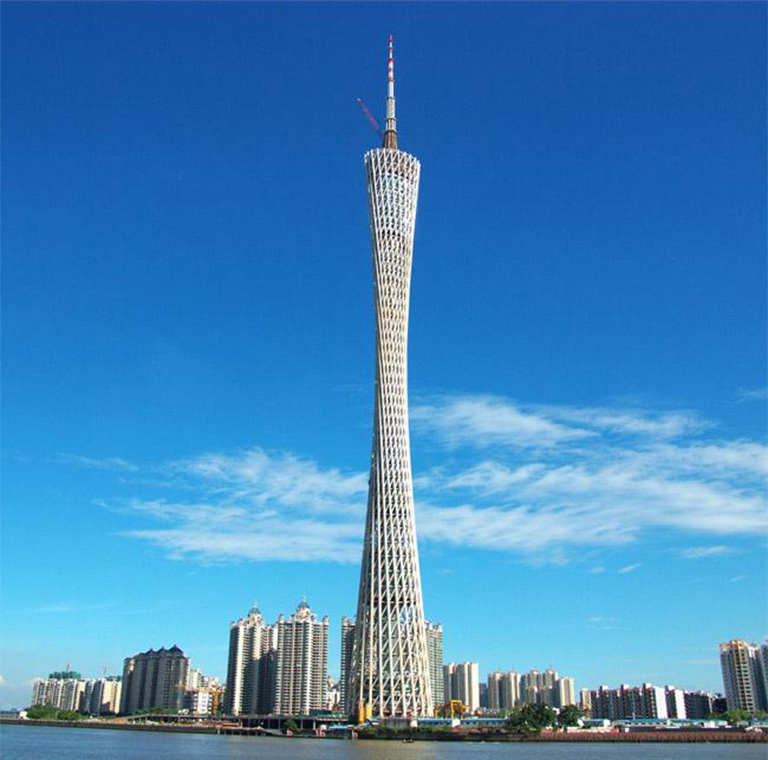 During night in a city, light can be the king. At night, the tower glows and emits light, shinning the night of Guangzhou. Every node in the lighting design is individually controllable so that 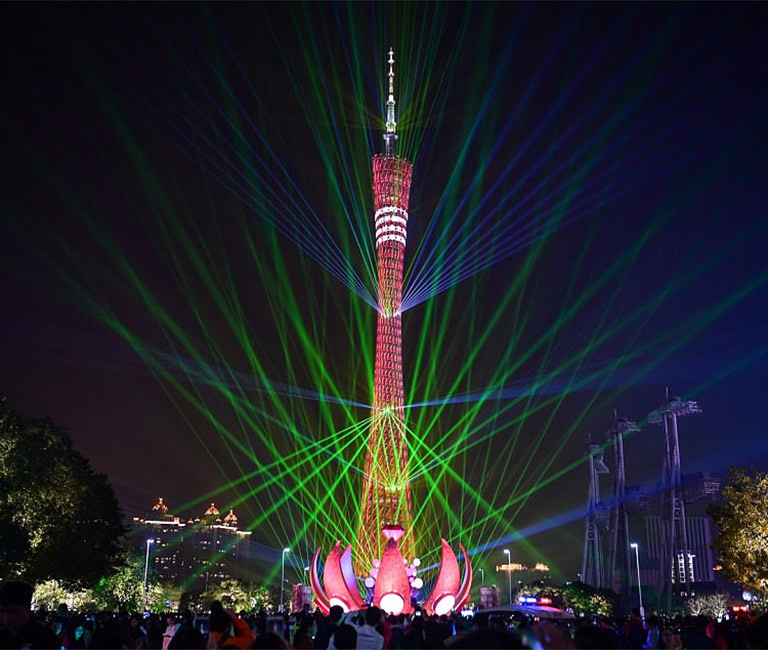 What to Do in Canton Tower

As a multifunctional tower, Canton Tower provides following types of amusement projects which can give you breathtaking feelings.

Canton Tower Observation Deck, with the height of 488 meters, is the world’s highest outdoor observation deck. The deck is the highest point that tourists can arrive in Canton Tower. From the deck, you could get a great 360 degree view of the whole city. The gross area of this deck is 177 square meters, in which the part of outdoors is 122 square meters and the part of indoors is 55 square meters.

Canton Tower is equipped of advanced control system, lightning proximity warning system and anemograph, by which its safety conditions can be monitored all the time. As a result, the deck has a high level of safety although this deck is so tall.

The deck is the best place to take photos of the whole city, especially the Pearl River. If you take photos here, you will also have the best view of sun, moon and starry sky. 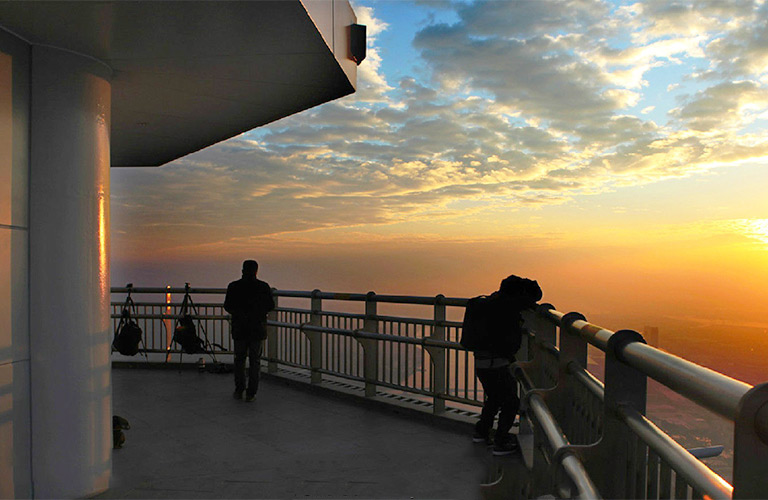 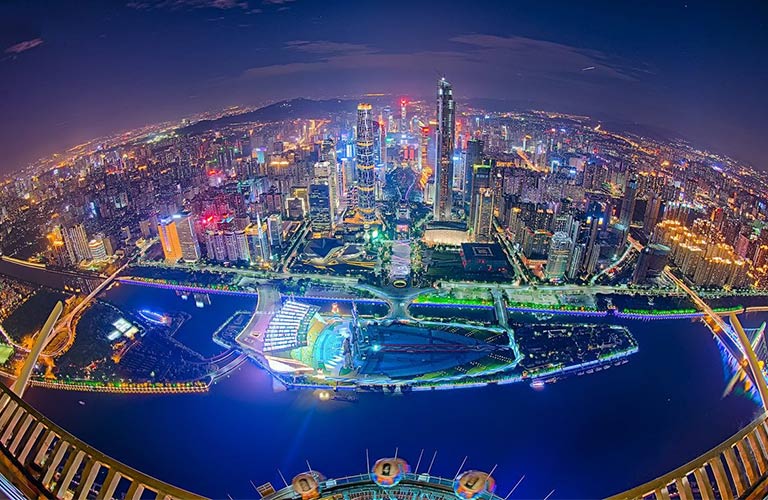 “If you thought the London Eye was a stomach-churning experience, then look away now”. The Daily Mail’s saying gave a perfect description of Canton Tower Bubble Tram. Canton Tower Bubble Tram, with the height of 460 meters, is the world’s highest Ferris wheel, which was put into use in 2011. Unlike other Ferris wheels, it has a 15-degree incline and can resist 8-magnitude earthquakes and Beaufort scale 12 typhoons. Although it's described as a Ferris, its passenger cars are not suspended from the rim of a wheel in the traditional fashion and the track is horizontal.

The Ferris wheel has 16 transparent 'crystal' pods taking about 20 minutes to go round the elliptical track constructing around the edge of the tower’s roof. Every capsule can hold 4 to 6 passengers. Tourists could have the overall view of the whole city from any direction.

Experiencing the bubble tram is not the only choice, and you can also walk or sit on the steps near the tram, which is called “Outdoor Observation Deck at 460m”. You could see some people who take beautiful wedding photos here. 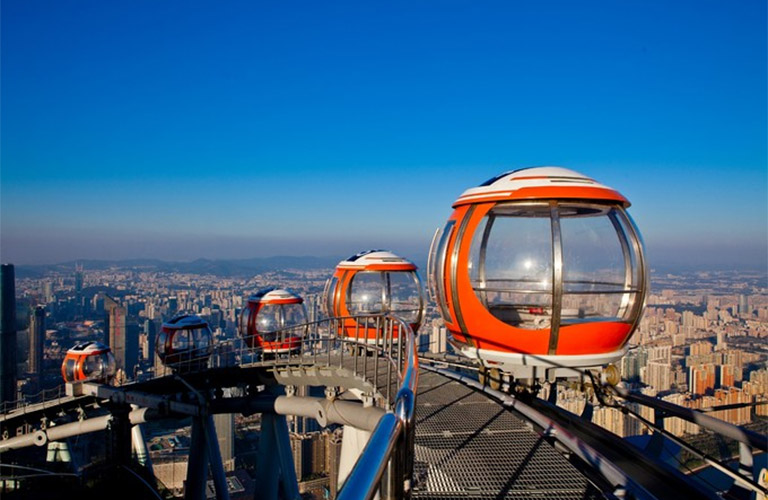 Canton Tower Sky Drop, with the height of 455 meters, is the world’s highest sky drop game. There are two kinds of mega drop on the tower, by which you could enjoy the traditional way of ‘sitting’ and the novel way of ‘jumping’. The standing jump vehicle on the east-facing side of the mast sits four, as does the standard sitting jump vehicle facing west. The lift speed (upwards) is 3.7 m/s (11.28 ft/s), while the free fall speed is 16 m/s (48.77 ft/s).

In 2012, it is listed in the Guinness World Records with the name of “Highest Thrill Ride” and is the first and the only one who gets this fame. If you are thrill-seeker, you could try to play this game. Don’t forget to smile while experience it, haha. 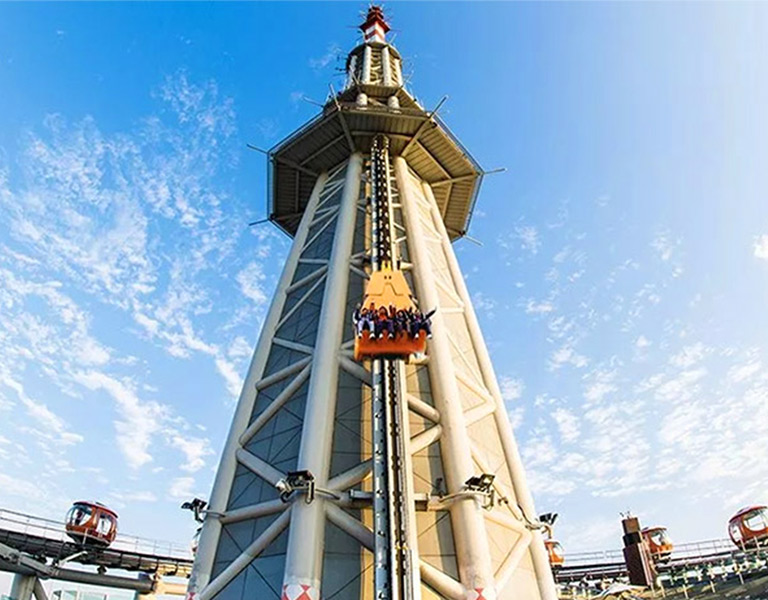 The 1,000-meter-long Spider Walk locates at the 168-meter to 334.4-meter height of Canton Tower, with a transparent floor made up of 90 pieces of glasses. It is the world's longest spiral staircase—a dizzying 32-story hike—up one of the world's tallest structures. The “Spider Walk” begins on the 32nd story of the Canton Tower, and takes you to the 1000 meters long spiral staircase around the waist of the tower. The stairs may make you dizzy with the double-glass set into the floor, on which you will truly feel the breathtaking height. Walking on the longest spiral stairs, you will feel that you are walking on the cobweb. Come here, your childhood dream of being a “Spider Man” will come true. At night, your way is illuminated, because of the constantly shifting light-show of Canton Tower. During a clear day, you will have the best views of the Pearl River. 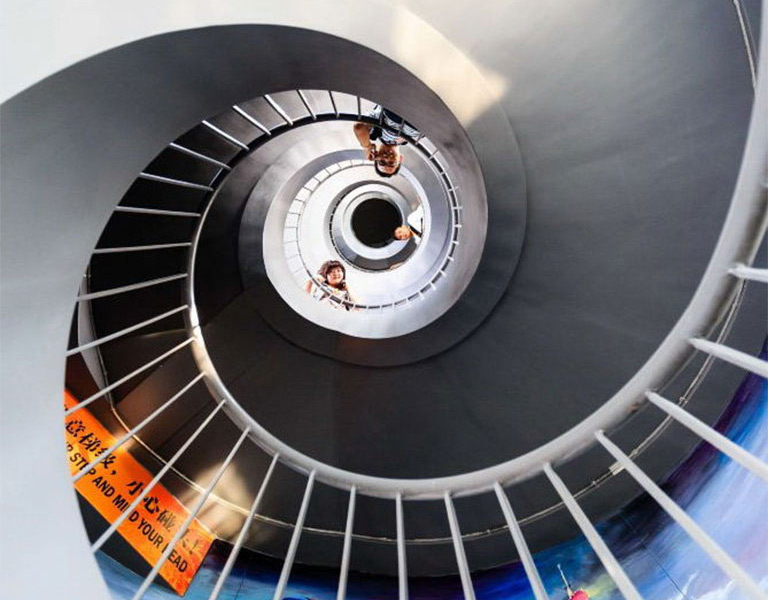 Canton Tower is located at the center of the city, and it is not far from some famous tourist attractions. They are some classic places you can’t miss.

Sun Yat-sen Memorial Hall (10 minutes walking distance) is the most used place for gathering or performance in Guangzhou. It was built during 1929~1931 in memory of the great revolutionist Sun Yat-sen. Sun Yat-sen Memorial Hall itself is a traditional Chinese building with significant outlooks and delicate interior designs. At every corner, you will find the spectacular style of Chinese architecture.

Yuexiu Park is the largest comprehensive park in Guangzhou. This park is built on the Yuexiu Hill which has been a famous scenic spot since Qin Dynasty (221BC-206BC). You will know why Guangzhou is called ”City of the Five Rams by visiting Five Rams Statue. With a deep exploration of Ming Dynasty Wall, Zhenhai Tower, and Sun Yat-sen Monument, you will have a deep impression about Yuexiu Park.

Temple of the Six Banyan Trees (About 2km), also Liurong Temple, is one of the best four Buddhist temples in Guangzhou with about 1500 years’ history. Its Flower Pagoda is the oldest landmark of Guangzhou City.

You could travel in this way:

Where Is Canton Tower

Canton Tower is located at No. 222 Yuejiang West Road, Haizhu District, Guangzhou City, Guangdong Province, China. Canton Tower is near metro station. You can take the metro line 3 or APM (Zhujiang New Town Automated People Mover System) to take off at the Canton Tower metro station. Then walk for no more than 500 meters, you will see Canton Tower. As it is in the downtown area, so you can easily arrive there by bus, subway or taxi. 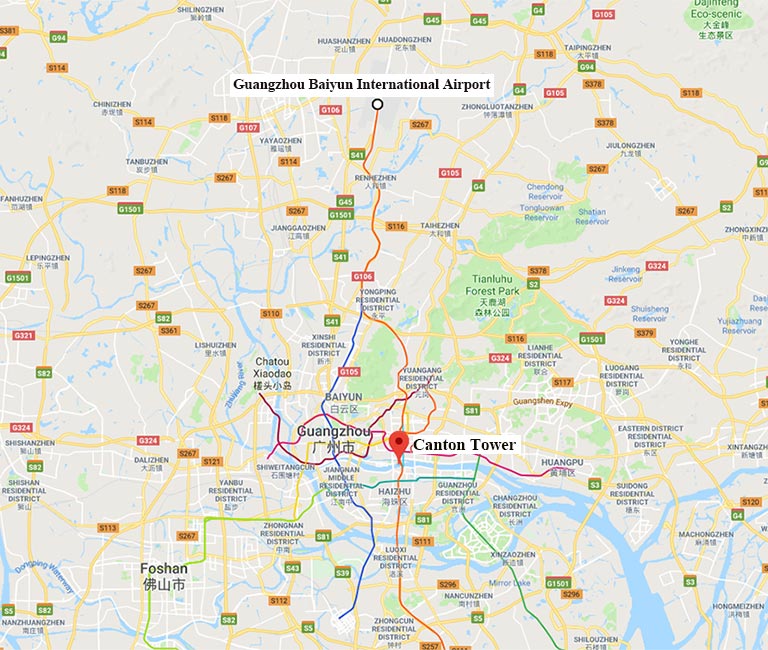 Note: The information is for reference only. For more details, please feel free to contact our professional travel consultants.

Note: The information is for reference only. For more details, please feel free to contact our professional travel consultants.

1. The rotating restaurants in the tower are definitely pricey, but it can be fun to dine with a view, on a clear day. You're most likely to get a great view just after a heavy rain.

2.It is advised to go there in a clear day, so you will get a great view of the city. It would be best to go at dusk, so that you could watch the tower gradually transforming to colorful. Meanwhile, you could also have a good look at the whole city.

How to Plan Your Guangzhou Tour

Most of tourists to Guangzhou spend 2-4 days to have a tour here, and they would go to the most popular tourist attractions, including Chen Clan Ancestral Hall, Yuexiu Park, Canton Tower, Temple of Six Banyan Trees, Museum of The Mausoleum of The Nanyue King, etc. You can also spend 1 more day to have fun at Chimelong Safari Park with you family. Besides, for many visitors, they also combine a trip to Guangzhou together with Hong Kong, Guilin, Macau, Guizhou, and other nearby cities like Shenzhen, Foshan, etc. to enjoy more delicious food and explore the southern China deeper!

If you are planning to visit Yuexiu Park, you could travel with China Discovery. Our private transfer service will save your time for waiting for the vehicles and other parts along the road. Besides, our professional local guide will give you wonderful introduction about those highlights to let you enjoy the travel. You just have a relaxing rest on the private car and focus on the highlights.

If you have your own special idea and interest of visiting Guangzhou without tiring schedule arranging and vehicle changing, please feel free to contact us and we will offer you a personal tailor-made trip! 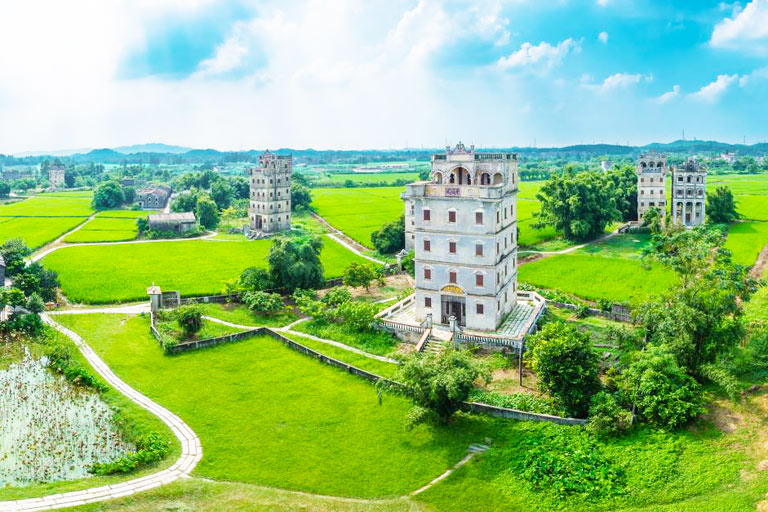