Zhangye West Railway Station is in downtown area while Zhangye Railway Station is about 8.5km from downtown, so both of them are quite accessible. The map below shows the specific location of the two railway stations, airport, and other main attractions in Zhangye. 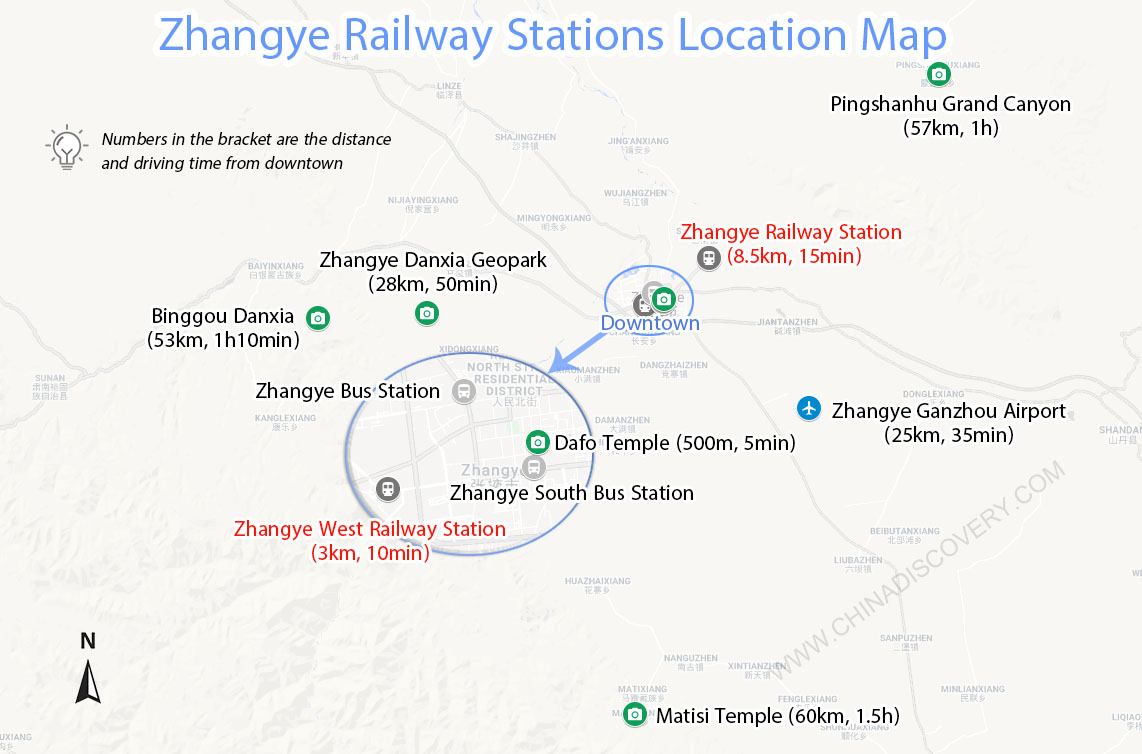 Zhangye West Railway Station is in Danxia Road, Ganzhou District, Zhangye City (张掖市甘州区丹霞路), only about 3km, 10 minutes by car from downtown. All the high speed trains via Zhangye will stop at this railway station. It becomes convenient for tourists to travel between Zhangye and Xian, Jiayuguan, Lanzhou, Xining, Dunhuang, Urumchi, etc. It now mainly serves Lanzhou-Zhangye High-Speed Railway and Lanzhou- Urumchi High-Speed Railway.

To Pingshanhu Grand Canyon: about 57km, 1h by car.

To Zhangye Ganzhou Airport: about 27km, 40min by car. 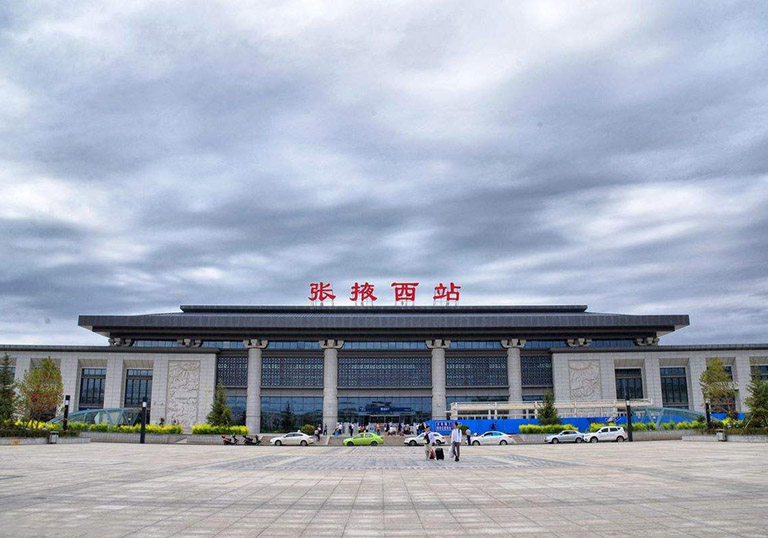 Zhangye West Railway Station is about 36km, 50 minutes’ drive (about CNY 150 by taxi) from Zhangye Danxia National Geopark. There is no direct bus between these two places. If you want to get there by public transportation, you need to get to Zhangye Bus Station (张掖汽车站) first, which is 3km away (10 minutes by car, 40 minutes by bus). As of November, 2019, the bus station operates hourly bus to Danxia Geopark from 9:00 to 12:00 and another two at 15:30 and 16:30. The bus runs about 1h to get there.

How to Get to Matisi Temple from Zhangye West Railway Station

Matisi Temple is 58km from Zhangye West Railway Station. It needs about 75min to drive there. Honestly speaking, it is not very convenient to get to Matisi Temple by public bus. Zhangye South Bus Station (张掖汽车南站), about 3km (10min by car, 30min by bus) from Zhangye West Railway Station, operates bus to Matisi Temple. But it won’t take you to the site directly. After you get off, there is still a 9km distance and you need to take a taxi there.

If you just want to focus on the trip itself without worrying too much about the transfer, you can consider travelling with us! We at China Discovery provide comfortable and efficient private pick up service for our clients who have booked one of our tour packages. No matter when your train arrives, our friendly tour guide and driver will wait for you there, then escort you to your hotel or any location you want to visit with an air-conditioned and non-smoking vehicle. They will always put your safety and comfort in the first place during every minute of the transfer. After the tour, they will also drop you off at the train station on time. In this way, you can get really relaxed on the way and focus on what you are interested in. The tour can be tailor made according to your plan, time, interests and demands. If you are interested, please feel free to contact us and tell us your needs.

Zhangye Railway Station is in Dongyuan Town, Ganzhou District, Zhangye City (张掖市甘州区东园镇). It was firstly built in 1955 to meet the basic transportation needs of the people coming and leaving Zhangye. It operates normal trains to major cities in western China and some other big cities like Beijing, Xian, Shanghai, Chengdu, and Dunhuang. It now mainly serves Lanzhou-Xinjiang Railway.

To Pingshanhu Grand Canyon: about 54km, 1h by car.

To Zhangye Ganzhou Airport: about 30km, 40min by car. 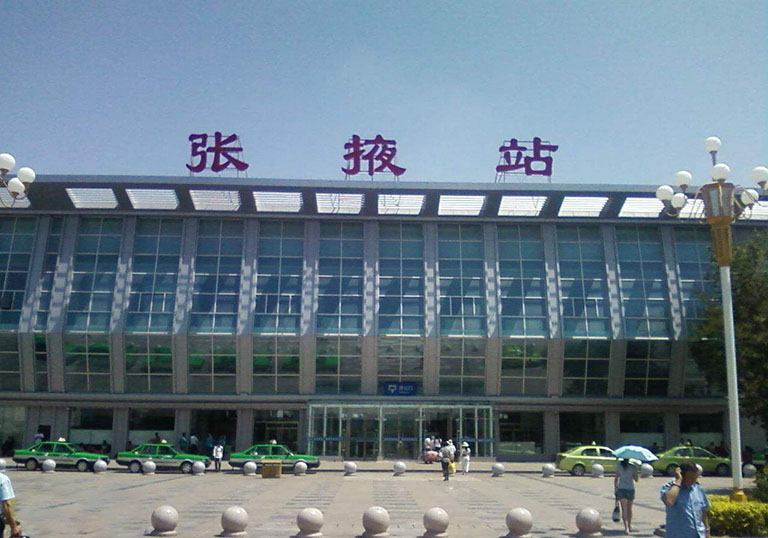 Only Zhangye West Railway Station serves high speed trains. It greatly shortens the transfer time between Zhangye and other northwestern cities such as Xian, Lanzhou, Xining, Dunhuang, Jiayuguan, and Urumchi.

As of November, 2019, there are about 20 trains from Xian to Zhangye, 3 of which are high speed trains running about 7.5h and the others are normal trains that need at least 13h. All the three high speed trains are listed below but they are for your reference only. For real-time and specific Xian Zhangye train information, please check Xian to Zhangye Train Schedule>>

From 6:30 to 17:00, there are about 12 daily high speed trains from Lanzhou to Zhangye. The duration is about 4.5h. The schedule below is for your reference only. There are also normal trains running between Lanzhou and Zhangye and it needs about 6h. For real-time and specific Lanzhou Zhangye train information, please check Lanzhou to Zhangye Train Schedule>>

How to Plan a Zhangye Tour

Generally speaking, 2-3 days will be sufficient to travel in Zhangye. For most people, Zhangye Danxia National Geological Park is what attracts them here. So it can be your first stop and you can appreciate both Linze Danxia Scenery and Binggou Danxia Scenery there. On the next day, you can take a visit to the temples in Zhangye such as Giant Buddha Temple and Matisi Temple. If you have another day, don't miss Pingshan Grand Canyon and Badan Jilin Desert.