Matisi Temple - Grottos in the Cliff

Matisi Temple Scenic Area is one large grotto group consisting of 7 small grotto groups stretching 30 kilometers. Legend has it that once a sacred horse left its footprint in a rock here, so Matisi Temple (also called Horse Hoof Temple, Mati in Chinese means Horse Hoof) got its name. There is no official record proving the exact time when Matisi Temple was built. However, large numbers of poets have portrayed Matisi Temple in their great works, and the earliest one could date back to Eastern Jin Dynasty (A.D. 317 - 402). Because of its long history, Matisi Temple, together with Mogao Grottoes in Dunhuang and Yulin Grottoes in Anxi, is regarded as the Three Artistic Treasured Grottoes of Hexi Buddha Holy Land.

Pagoda Forrest (浮雕石塔林) is located in the north section. There are dozens of pagodas in different shapes densely scattered in the red palisades forming a holy forest. Although most of them were built in the Yuan Dynasty (A.D. 1271 - 1368) and have been weathered a lot in the long time, these pagodas still remain their bright color and distinct lines. The carving techniques applied to these pagodas are rarely found in other grottoes in China but share a similarity with the Wuge Grottoes in Cambodia, depicting that Tibetan Buddhism was introduced to China a long time ago.

The south and middle section are mainly built with many Buddhist Grottoes. No. 6 Grotto named Western Three Saint Palace (西方三圣殿) is one hot grotto. It was carved in the prosperous Tang Dynasty (A.D. 618 - 907), 5m long, 5.5m wide and 5.5m high. One Buddha statue with plump face and naturally proportionate shape sat in the center of the grotto. You can also see the statue of his two followers which have different expressions and shapes and suggest their different temper and age. Professors regard them as the Most Majestic Achievement of Tang Dynasty. Several palaces worshiped with Buddha and Bodhisattva are also worth your visit.

Matisi Temple includes North Matisi Temple and South Temple. In Matisi Temple, one attraction you must see is Thirty-three Heaven Grottoes (三十三天石窟) (additional 35 RMB needed) where a large quantity of tourists flock into. Carved in original Puguang Temple, Thirty-three Heaven Grottoes have 7 floors and 21 grottoes with exits to each other. In a shape of pagoda, this construction is rather infrequent and characteristic. In Buddhism, there are four towering peaks and each peak has one heaven and each heaven lived an immortal. In addition to the central heaven, there are 33 heavens in total. All Buddhists believe that anyone who can reach to the thirty-third heaven will come to a successful life. So everyone who comes to Matisi Temple will climb up to Thirty-three Heaven Grottoes to have a spirit-washing experience. In the highest grotto stands the statue of Green Tara Bodhisattva, who is said to be turned by a drop of tear of the Avalokitesvara. In the left part of the highest grotto, there is a statue of White Tara Bodhisattva. It is regarded as Songzi Guanyin by the locals. Those who want child will pray to her and their dream will be realized if White Tara Bodhisattva hears their pray.

If Thirty-three Heaven Grottoes is a dazzling pearl in Matisi Temple, Jinta Temple (金塔寺) will be the essence of Matisi Temple without any doubt. Located in the southeast of the North Matisi Temple, Jinta Temple is hanging high in the cliff and 60 meters from the ground. Though only owns two grottoes, it enjoys valuable best-preserved cultural sites and relics. There are more than 200 precious statues carved in Norther Liang (A.D. 397 - 460), Northern Wei (A.D. 386 - 534), Sui (A.D. 581 - 619), Tang (A.D. 618 - 907), Xixia (A.D. 1038 - 1227) Dynasties and so on. The large-scale Apsaras is one of the Eight Accomplishments of Buddhism and reputed as the Essence of Eastern Aspsaras. With various postures and vivid expressions, these Aspsaras look quite third-dimensional.

Mati Temple (马蹄殿) is one important grotto of North Matisi Temple, renowned for the large hoof print. There are three niches in the grotto but it’s a pity that no ancient statues exist here. In the left of the central column is the hoof print. Legend tells that when King Gesar passed Matisi Temple on his horse, his horse was attracted by the beautiful scenery and wanted to have a stay here. But as one of the hoofs gets down, King Gesar awaked and pulled the lope. The horse fleed away but his footprint left.

South Matisi Temple is also called Shengguo Temple and all the monks are Tibetan. There are several halls roofed with shining golden tiles. Large Buddhist activities are held here. A lot of people spare no pains to come here to pray or express their appreciation. The faithful believers also stream here to pay homage. You can feel a solemn and respectful atmosphere, full of sutras chanting and bell ringing.

King Gesar Palace (格萨尔王殿) is the place where Gesar and his followers are worshipped. Gesar was a historic hero in Tibet and his story about defeating the devil spread every corner of the grassland. The Grotto is over 70m long, 12m wide and 3m high and the statues of Gesar and his 36 generals are settled here. They all ride horses and hold diverse weapons, ready for a just war. From this palace, you will read the ancient story of King Gesar.

Guanyin Grottoes (观音殿), surrounded by thick bushes and trees, is made up of Upper Grotto, Central Grotto and Lower Grotto where Buddhist Princesses and one follower respectively stand. Three Grottos are located in three stone peaks. There is one stone column in each grotto, engraved with beautiful murals. The environment is very peaceful and you will get rid of all your annoyance and unhappiness. One mural called “Four immortal Plays with Water” arouses tourists’ interest. Watching this great mural, you are like walking into another world and can have an spirit communication with these immortals.

Other Recommended Tours in Gansu 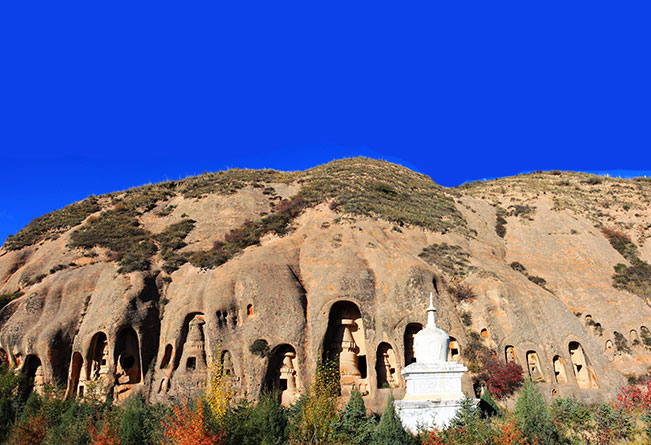 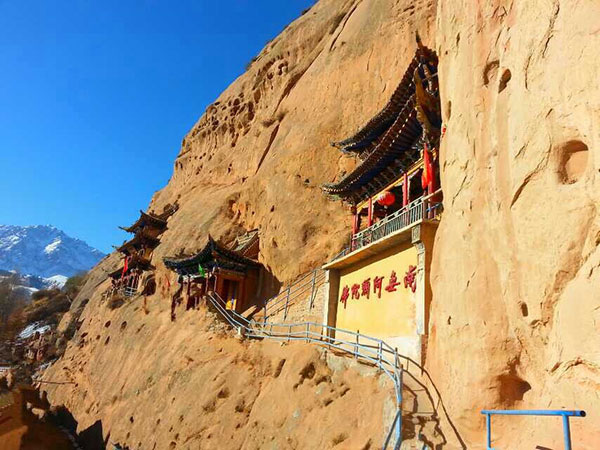 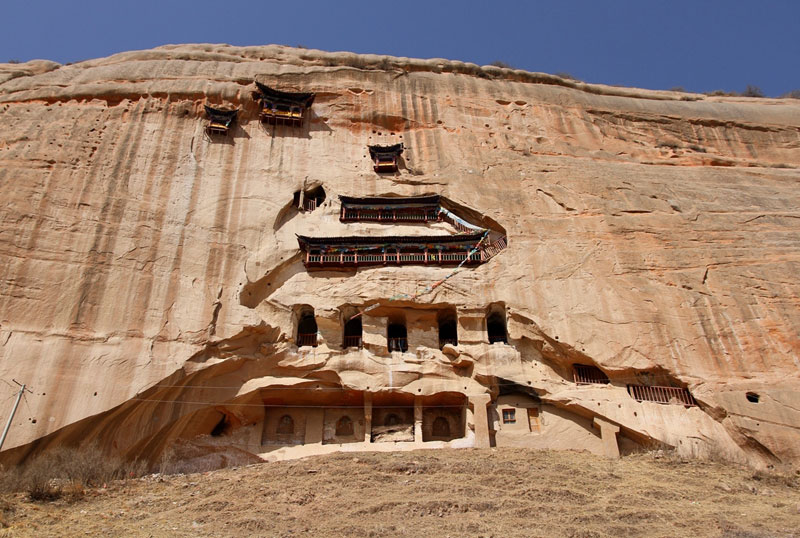 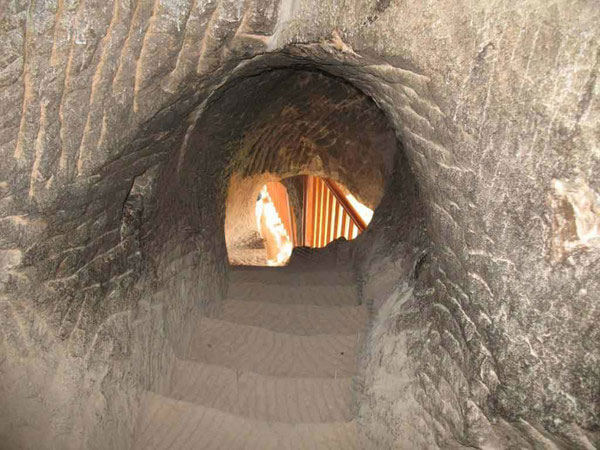 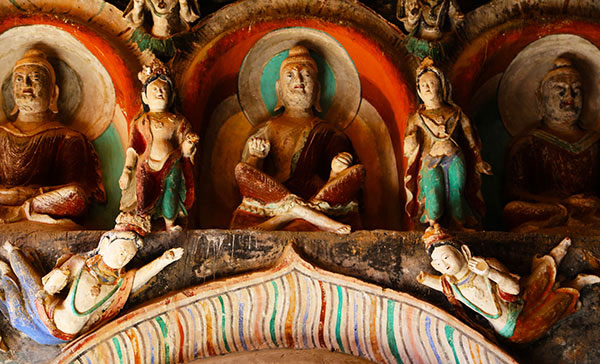 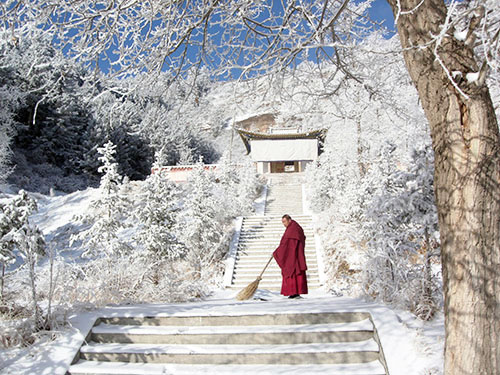 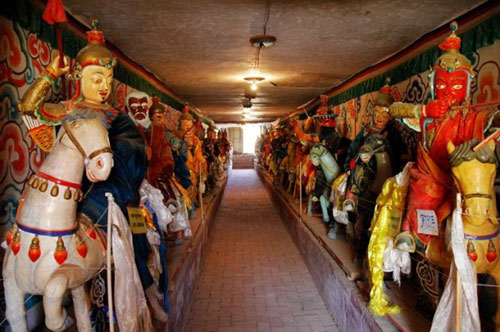 Passing through the entrance of Matisi Temple Scenic Area, you can see old Qianfo Grottoes in front of you. Walking along the main road after feasting your eyes with incredible Buddhist Grottoes and towering pagodas in Qianfo Grottoes, get back to the living quarters. Then turn to east in stud-farm and the magnificent building standing before you is Matisi Temple. Don’t miss the Thirty-three Heaven Grottoes which will highlight your trip though it may be somewhat crowded. After appreciating the wonders in Matisi Temple, go to the north of living quarters and continue your trip in King Gesar and 13km-away Guanyin Grottos. If time permits, go to Linsong Waterfall to enjoy the spectacular view.

Located in Sunan, 60 km away from Zhangye City, Matisi Temple is easy to get to but you need to transfer several times by public bus. Lots of tourists like to rent a car with driver to cover their journey.

If you want to get rid of hustle of public transportation and troublesome navigation, you can book a private tour package which covers sightseeing, dining and transfer from us. Our knowledgeable local tour guide and skilled driver will escort you to Matisi Temple with speed and convenience, and take care of all the details. You just need to focus on sightseeing.>>Contact Us Now 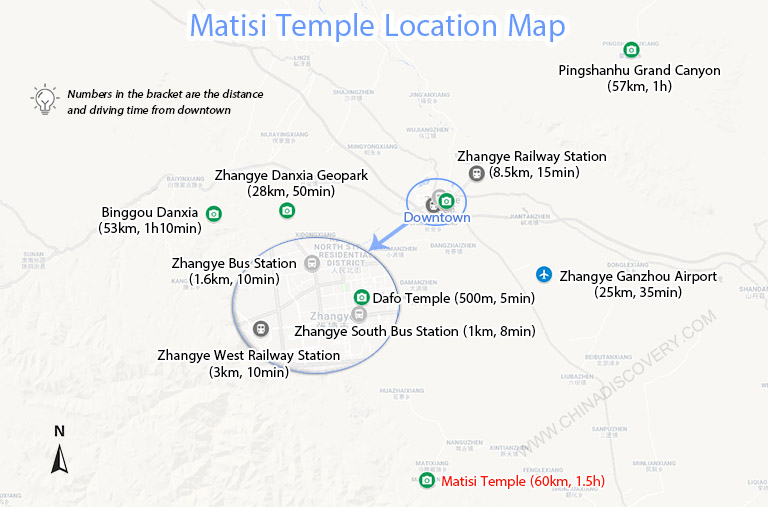 How to Plan a Zhangye Tour with Matisi Temple

Generally speaking, 2-3 days will be sufficient to travel in Zhangye. For most people, Zhangye Danxia National Geological Park is what attracts them here. So it can be your first stop and you can appreciate both Linze Danxia Scenery and Binggou Danxia Scenery there. On the next day, you can take a visit to the temples in Zhangye such as Giant Buddha Temple and Matisi Temple. If you have another day, don't miss Pingshanhu Grand Canyon and Badan Jilin Desert.