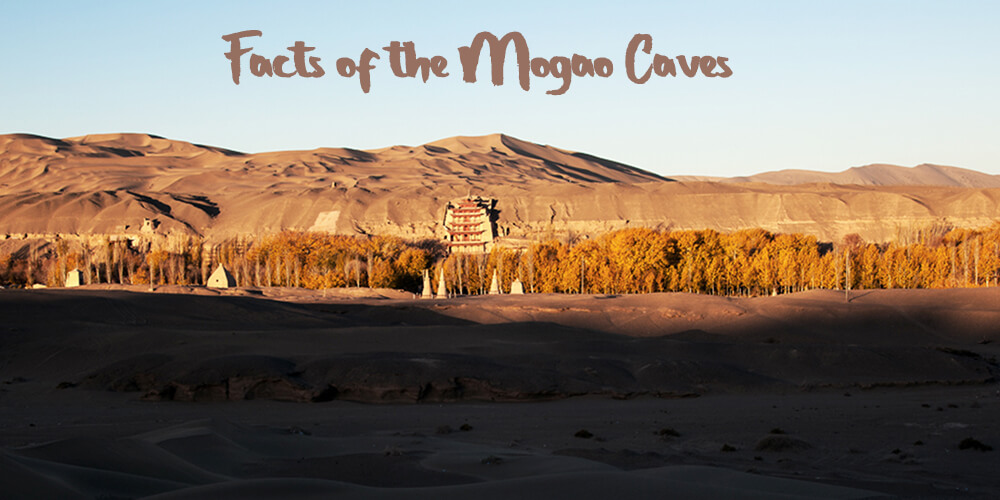 Located in the west end of Gansu Province, southeast of the center of Dunhuang, the Mogao Caves (Mogao Grottoes), or the Thousand Buddha Grottoes is the largest treasure trove of Buddhism art in the world. In 1987, they were listed as a world cultural heritage site, known as the most valuable cultural discovery in the 20th century and the "Oriental Louvre". The caves were cut into a side of the cliff which is about 2 kilometers long. Numerous murals, sculptures, and other objects were found in the caves. These art works provide an abundance of vivid materials depicting various aspects of medieval politics, economics, culture, arts, religion, ethnic relations, and daily dress in western China.

What does Mogao Mean?

As for its name, at first it was called "Mogao Caves", it can be 漠高窟 or 莫高窟 in Chinese, and Mo means "desert" and also "no". If it is no, the Mogao Caves refers to "the caves in high place of the desert". Also, according to the Buddhism term, "Mo" should mean "no", and "Mogao Caves" means that there is no higher and better caves than the peerless ones.

The Mogao Caves Seen from Afar

What Is Inside the Mogao Caves?

On the cliffs of Dangquan River and Mingsha mountain in the East, are 735 caves facing the direction of Sanwei mountain, the branch of Qilian Mountain in the East; Also, there are 2,415 colored sculptures and 45,000 square meters’ murals in the cave. More than 50,000 ancient scriptures and documents in the Sutra cave were discovered in modern times.

When Was the Mogao Caves Built? 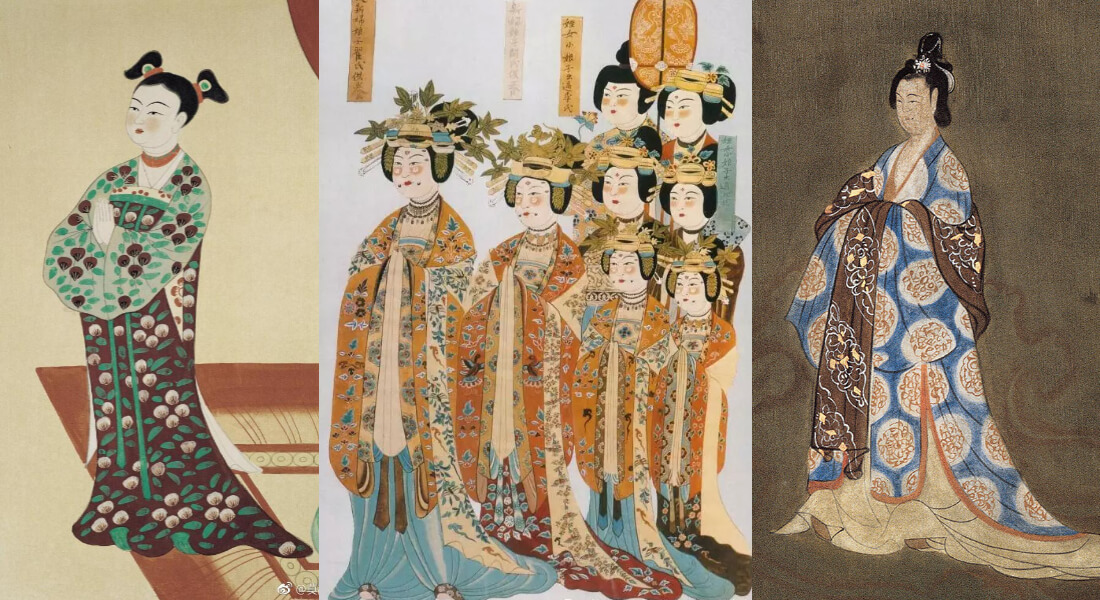 Beautiful Portraits of Female Benefactors Were Also Painted in the Cave

Who Built the Mogao Caves?

Why Was the Mogao Caves Built?

The Mogao Caves of Dunhuang are not used for living for the normal residents, but for monks to cultivate themselves according to a religious doctrine. As recorded in the ancient inscriptions, the very first monk who started when he had traveled to Dunhuang in 366 AD. During the sunset, he went to the foot of a mountain, and the sunray came down to the top of the mountain, which seemed to show the image of a thousands of Buddhas. So the monk decided to dig a Buddha grotto on the cliff opposite the mountain, which became the first cave in Dunhuang. Later, with the development of Buddhist activities, the number of caves increased day by day, and the caves making was booming and lasted for more than 1000 years. In addition to the scenery coincidence, during the Buddhism's eastward spreading period, there were many Buddhists who preached Dharma among the merchants of the western regions who traveled along the silk road. The Buddhist monks from the West stopped here to spread Buddhism, translated Buddhist scriptures, set up temples. Therefore, Dunhuang had become a place where Buddhism was flourishing, which contributed to the construction and development of Mogao grottoes. 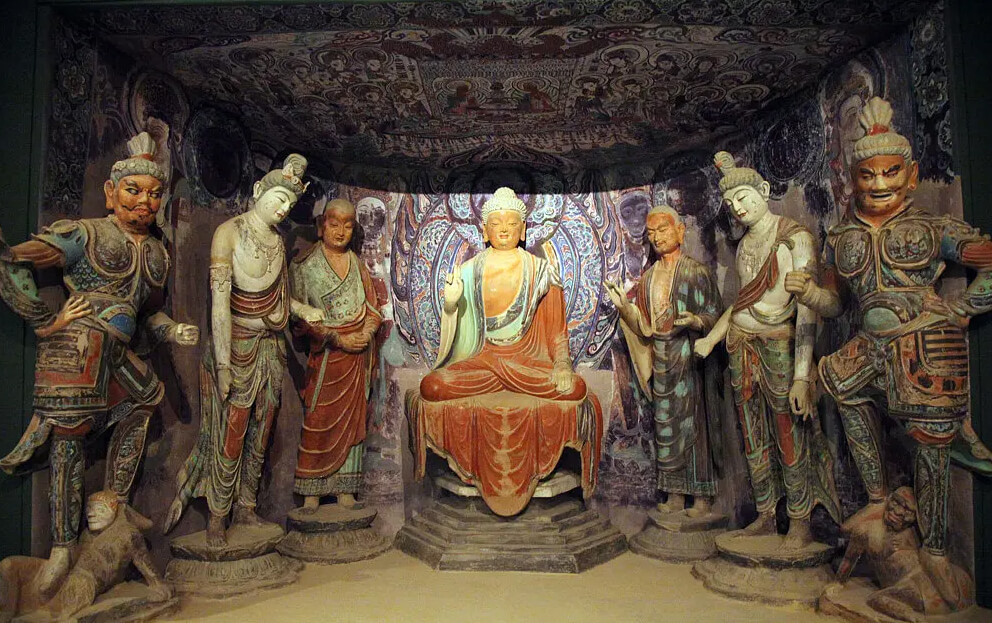 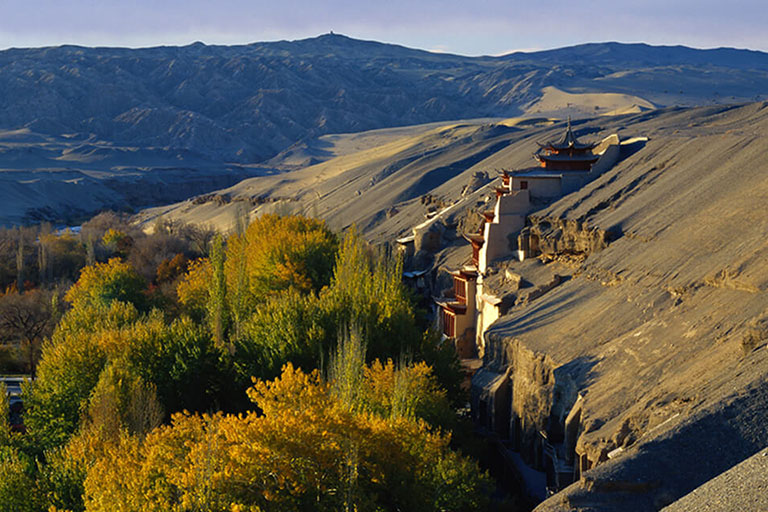 The Nine-storey Temple Embedded into the Cliff

Why Was the Mogao Caves Built on the Cliff?

The grotto temple is a place for Buddhism activities, which is not much different from other temples. According to Buddhism, monasteries and temples need a clean environment, free from the interference of secular life as much as possible. Therefore, the mountain and forest have always been the sites selection for Buddhist temples and grottoes. Many famous mountains have temples. Compared with normal monasteries, Grottoes have specific requirements, that is, at least there should be cliffs to be dug. The Mogao Caves is located on the cliffs of Mingsha mountain formed by river erosion in the west. It is not only far away from secular life, but also because of the existence of Daquan River, which forms a quiet natural scenery. The dryness is more suitable for the preservation of sculptures and murals in the grottoes, and the sedimentary rock is also suitable for excavation.

Who Discovered the Mogao Caves in Modern Times?

The Mogao Caves were mostly built in the northern and Southern Dynasties and Sui and Tang Dynasties. At that time, rulers respected Buddhism and were also obsessed with the construction of grottoes. However, with the collapse of the Tang Dynasty (618 AD - 907 AD), the excavation gradually subsided. In the Ming and Qing Dynasties, because of the historical changes, the Mogao Cave were gradually forgotten and left untouched.

In 1900 A.D., a Taoist named Wang Yuanlu had come to the Mogao Caves and settled down for years. When cleaning the grottoes, he found a grotto with many ancient books and scriptures buried inside. He reported his discovery to the local governors. However nobody really realized their value until the news was known by a British explorer Stein who came to the Mogao Grottoes and bought a large number of these priceless scriptures, which created quite a stir in the archaeology field, and also attracted archaeologists and explorers from France, the United States, Japan and Russia to come here with bringing a large number of scriptures and murals to their home countries. The Mogao Caves is popped out from the desert land and known by the other side of the world. 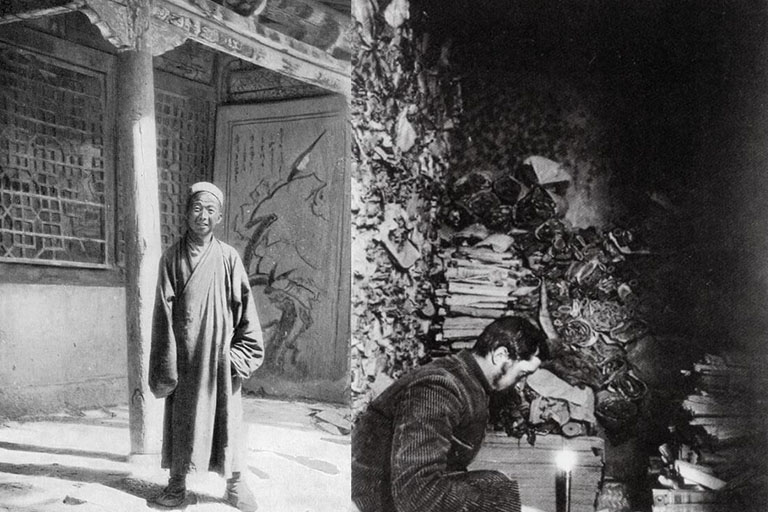 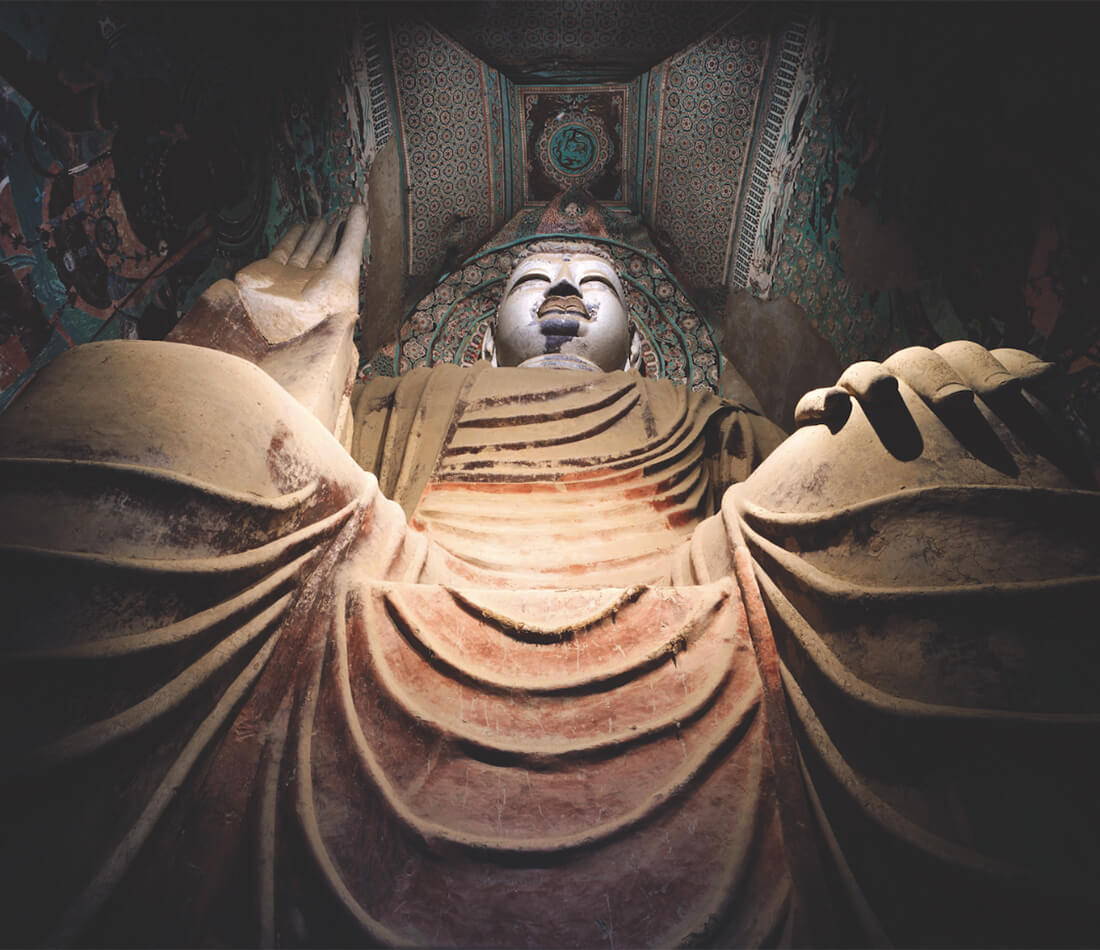 The 35 Meters' Buddha Sculpture in Cave 96

What Is the Mogao Caves Known for?

The Mogao Caves are a wondrous Archaeological find of ancient architectures, sculptures and murals. Due to their different functions, the caves were built in differet shapes and sizes; the sculptures are the highlights of Mogao Grottoes, which were placed in a prominent position in the grottoes; murals are full of the walls of the grottoes, which vividly represent the Buddhist thought and philosophy with plenty of colors and rich details. The Mogao Grottoes are beyond "treasure troves". Since the excavation of Mogao Grottoes in 366 A.D., it didn't stop until the Yuan Dynasty (1271 AD - 1368 AD). Enduring so many dynasties, the grottoes had been fully dug out, so that later generations would even cover the original murals in the previous grottoes and redraw them. The mural we see now is actually a chronicle of millennial art. Different styles, shapes and cultures come together. It's no exaggeration to say that the Mogao Caves is the only place in the world that artists who have lived in different periods in over one thousand years can compete with each other at a same site. Such a magical thing can only happen in Mogao Grottoes. In addition to architecture, colored sculptures and murals, a large number of scriptures discovered here are scattered around the world, recording the history, culture, religion of different nationalities along the silk road. It is a profound find for archaeological research, and thus formed the studies of Dunhuang.

What Painful Damage Has the Mogao Caves Suffered?

The Mogao Caves has been partially reconstructed and repaired since its rediscovery. In fact, after its abandonment in the Yuan and Ming Dynasties, the Mogao Caves was desolate for centuries. Apart from the natural weathering, the Mogao Caves has experienced a lot of human-caused destruction. The valuable Scriptures in the Sutra cave founded by the Taoist Wang Yuandao, who guarded here since 1900, were sold to the explorers from all over the world, such as British Stein and French Pelliot. Some of documents got ruined during the long distance transportation or torn on purpose. Later, with nothing left in the sutra cave, and American Wallner arrived and cut a large number of murals and smuggled them back home, which caused serious damage for the existing ones. From 1920 to 1921, a group of Russian soldiers who has failed in the civil war and fled to China and they were placed in the Mogao Caves for half a year. Some of them scribbled and scratched on the murals; some set fire and cook in the cave, and lots of murals got damaged by them. Along with the rediscovery of Mogao Caves, tens of famous painters arrived here to to copy the murals of different dynasties, and they even rudely stripped down the murals for practice. 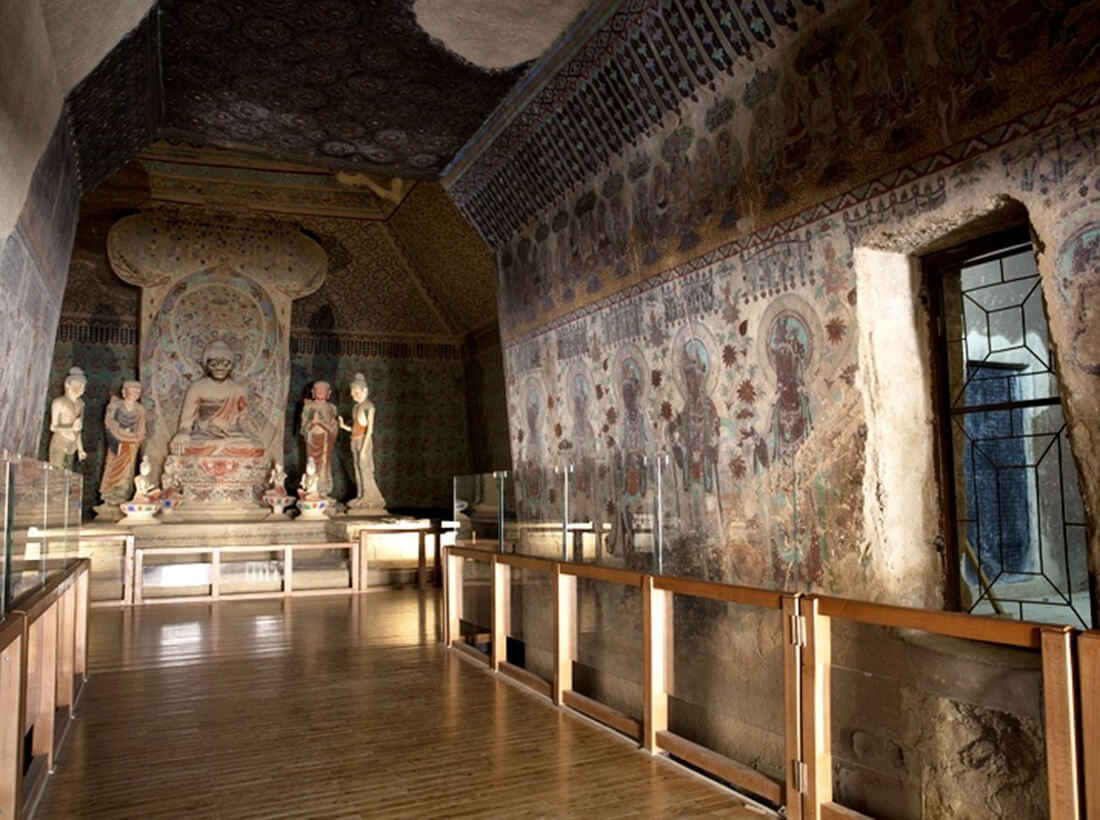 The Empty Library Cave Which Has Had Over 50,000 Ancient Scriptures 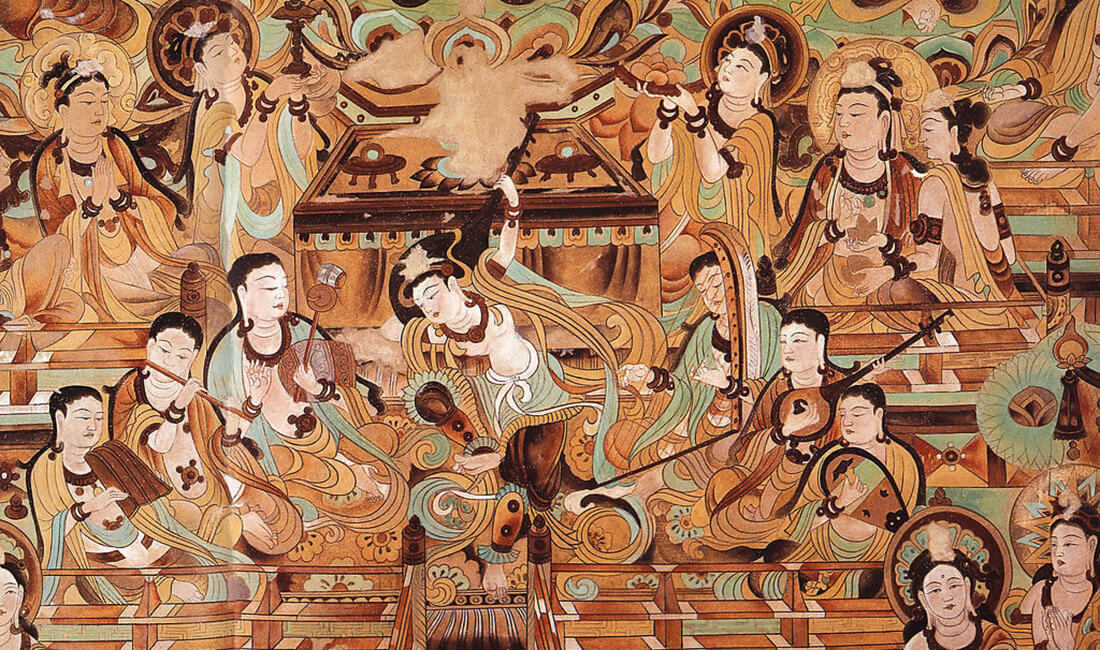 How Was the Mural in the Mogao Caves Painted?

After the caves were dug, the artisans could not draw on the rough sandstone directly . They covered the rocks with Dunhuang soil and invented a composite material with glutinous rice and some herbs. Such mixed soil was sticky and had strong adhesion like concrete. After flattening the cave, the white powder was added to the surface and the preliminary work was done. Later, the painters came through ingenious conception, and started to drew a good manuscript on the wall, and painted with different colors. With the most expensive mineral pigments at that time, some even use gold powder. These murals tell the stories of Buddhas, main stories of Buddhism, mythological stories, portraits of benefactors, from which you can tell the aesthetic characteristics of different dynasties.

Usually, 2~4 days are needed to explore the highlights of Dunhuang. The world heritage site Mogao Caves and the stunning landscape of Mingsha Mountain and Crescent Lake are two Must-Go attractions both of which take a half-day to visit. You can then spend one more day to explore the western region of Dunhuang which also has a lot of attractions, such as the ruin of Great Wall, Yumenguan Pass, Yardang Landform, etc. As for the downtown sites, if time allows, don't miss the Shazhou Night Market and Dunhuang Museum. Some travelers usually travel Dunhuang with other destinations in Gansu, such as Jiayuguan, Zhangye, Lanzhou, etc. One can even travel from Dunhuang to Turpan, Urumqi of Xinjiang. Travel with China Discovery! Please don't hesitate to contact us now to have a tailor-made Dunhuang tour for you! 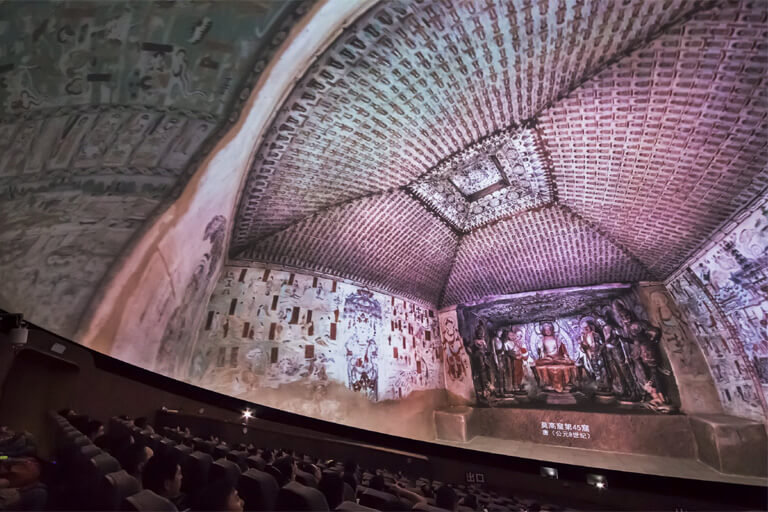 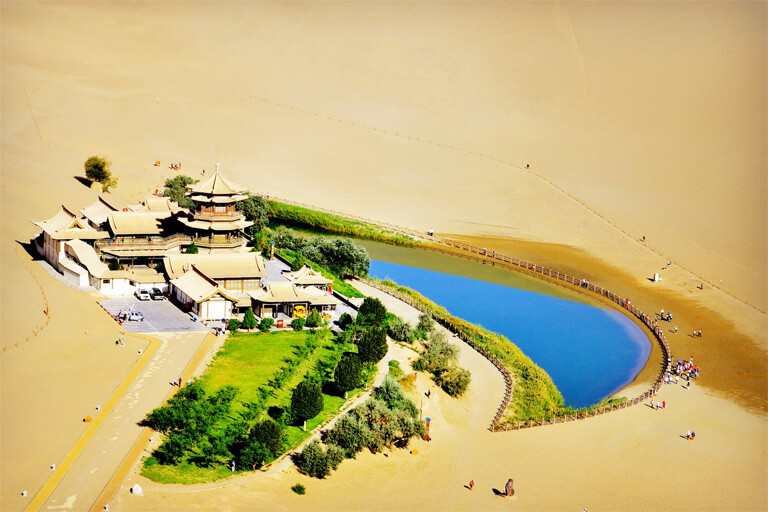 This is the essence tour of Dunhuang classic itinerary, money-saving, flexible. You will enjoy desert views of Mingshashan, visit Mogao Caves, and explore culture and history of ancient Silk Road. 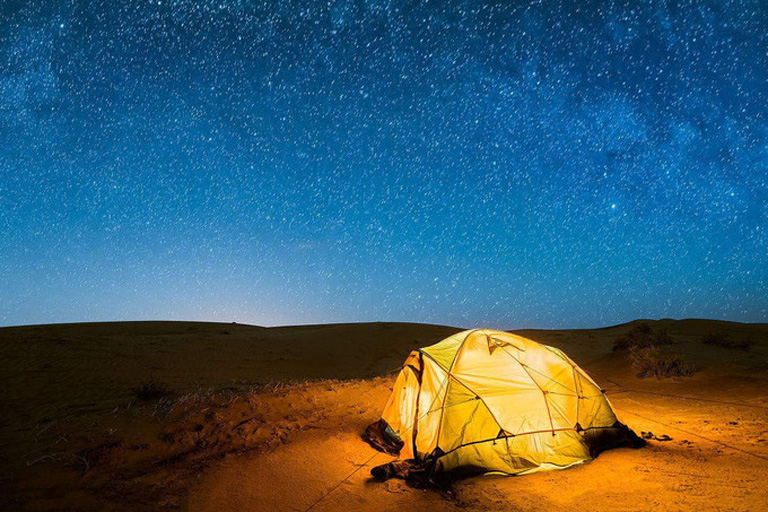 In-depth exploration of Mogao Caves, also including a well-designed camping experience in the most beautiful deserts of Mingshashan. 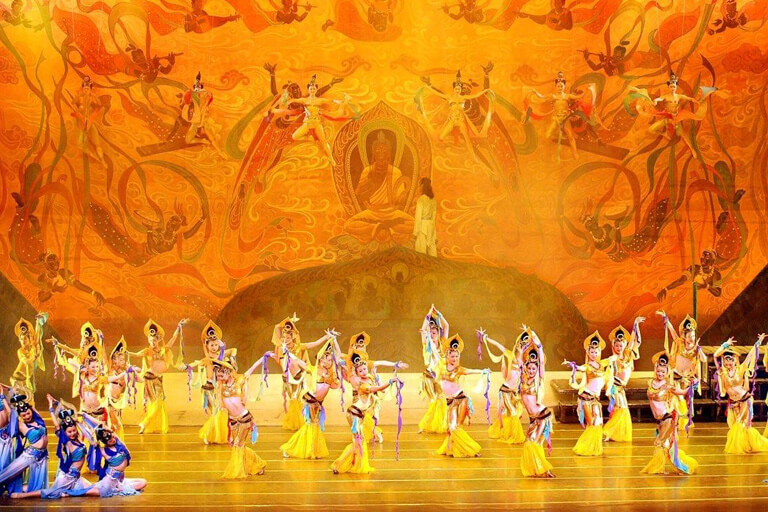 Looking for a worry-free day tour in Dunhuang? Here is the ideal tour. Our local tour guide will take you to explore the best part of Dunhuang with an enjoyable pace.