The fast and mordern Airport Express Train, also known as Beijing Airport Subway Line, is the fastest way to get to central Beijing area. It was put into operation in 2008 before the Olympic Games. With a lenth of 28.1km, the Airport Express links Beijing Capital International Airport's Terminal 3(3号航站楼) and Terminal 2(2号航站楼) with Dongzhimen (东直门 - 8km to the city center Tian'anmen Square) and Sanyuanqiao (三元桥 - 9.5km to the city center Tian'anmen Square) in Beijing downtown, and allows passengers to transfer from the Capital Airport to downtown area within 30 minutes. The cost is only CNY 25 which is much cheaper than taxi. The timetables of the Airport Express are quite frequent. Inside the Airport Express Train 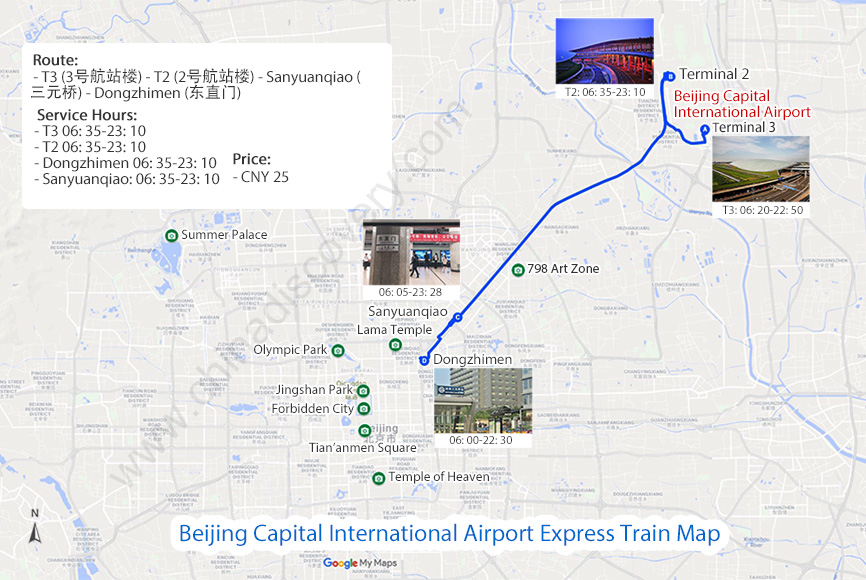 From Airport to Downtown

From Downtown to Airport

Notice: the actual departing and arriving time may differ between 1~3 minutes.

Where to Take Express Train

Dongzhimen Station is located on the northeastern 2nd Ring Road, about 8km to the city center Tian'anmen Square, 700m to Dongzhimen Long-distance Bus Station. Passengers can change to subway Line 2 and Line 13 from Express train here.

Dongzhimen Station is located on the northeastern 3rd Ring Road, about 9.5km to the city center Tian'anmen Square. Passengers can change to subway Line 10 from Express train here. How and Where to Buy the Airport Express Ticket

The Airport Train ticket is a card with route map on the backside. You should keep the paper ticket all the time because it will be reclaimed when you exist from the train station. How to Take Airport Express Train

The flows of taking the Airport Express is simple and quick. Once you exiting the airport arrival halls, or stepping into Sanyuanqiao or Dongzhimen, you will find clear signs with both Chinese and English. Just follow the signs to find the ticket office, safety check-in, elevators and waiting hall.

1. Follow the signs to find the gate to the Express Train;

3. Take elevator or walk along stairs to find the Waiting Hall;

4. Board the Aiport Express train;

5. Exit from the station or change to other subway lines. Check in with Ticket Card to the Waiting Hall

More about Beijing Flights and Airports