Hefang Street is the most famed street in Hangzhou City. With brilliant culture and long history, it is regarded as a typical symbol of ancient Hangzhou. Vising this busy but interesting street, you can catch a glimpse of antique buildings and long-survived stores, taste local snacks as well as savor the beautiful artifacts.

Best Seasons: All year around

Opening Time: 24 hours open but the stores will be closed around 22:00

Hefang Street, once called Taiping Street, dates back to the time South Song Dynasty when Hangzhou was the capital city. In 1152, General Zhang Jun (张俊) was conferred the title of as was “Qinghe County King”. In order to highlight his high status, Zhang Jun began to build his mansion around Taiping Street. People called this site as Qinghe Fang and renamed Taiping Street as Hefang Street. In South Song Dynasty, Hefang Street has been a rather prosperous business site and the center of culture and politics. It is said that Zhang Jun once invited to Emperor Gaozhong to have an unprecedented feast of China’s history in Qinghe Street and the menu came down and became today’s Hangzhou Dishes.

Nowadays, Hefang Street is the most famous and the only well-preserved ancient street in Hangzhou. It represents the old story and showcases the folk culture of Hangzhou. The cobbled street is lined with lots of time-honored stores from which you will get a better understanding of ancient Hangzhou and Ancient China. You could explore the traditional Chinese Medicine Culture, enjoy the delicate handicrafts, taste the delicious Hangzhou dishes...

What to See & Do at Hefang Street

Interested in magic Chinese Medicine Culture? Hefang Street is the first option for tourists in Hangzhou. Just in ancient time, many Chinese medicine halls were set up in Hefang Street, and some of them still survived. Now, you can explore traditional chinse medicine culture in Hu Qing Yu Tang, Yezhongde Tang (叶种德堂), Baohe Tang, Fanghuichun Tang.

Hu Qing Yu Tang (胡庆余堂): Being built in 1874 by Hu Xueyan, Hu Qing Yu Tang is an herbal medicine shop as well as a museum of traditional Chinese medicine. It is a well-preserved business architectures group of late Qing Dynasty. Entering this majestic building, you can see the great hall, exquisite carvings and its unique layout. Covering an area of over 4,000 square meters, Apart from the style and feature of ancient architectures, it is also available to read the essence of Chinese medicine treasure, learn many anecdotes of some celebrated Chinese doctors, experience the pharmaceutical technology in person if you are interested in. Being insisted on the concept of “kind deeds, excellent goods at reasonable price and never cheat”, Hu Qing Yu Tang has long been respected and praised by local people.

Baohe Tang (保和堂): It is said that Baohe Tang is an herbal medicine shop with more than one thousand years. According to the legendary, Xu Xian (许仙) was an apprentice in Baohe Tang when he met Madam White Snack (白娘子) in the West Lake. So you can find a bronze statue of Xu Xian in near the gate of Baohe Tang. In fact, Baohe Tang enjoys a high prestige among Qinghe Fang because the doctors in Baohe Tang always cured the disease for poor people free. At the end of Qing Dynasty, Baohe Tang declined for the growing prosperity of Hu Qing Yu Tang. Today’s Baohe Tang is new built, and medicinal liquor and medicinal tea are on offer.

Zhu Bingren Copper Sculpture Museum (朱炳仁铜雕艺术博物馆) :Zhu Bingren Copper Sculpture Museum is the only museum focusing on copper sculpture in China. Occupying about 3,000 square meters, the whole museum shows a Jiangnan style in Ming and Qing Dynasty. Except for the wall and the floor, other building structure and furniture are all made by copper structure or decorated with copper, totally costing 56 ton of copper, so it is also honored as Jiangnan Copper House. Entering this museum, you can feel the strong copper culture and these beautiful copper paintings, copper calligraphies, copper murals and copper statues will really fest your eyes and give you a surprise.

Handicrafts are a big label of Hangzhou. In fact, Hangzhou is not the capital of South Song Dynasty, but a "capital" of knives, scissors, umbrellas and fans. Luckily, you can see not only these four products (quite different from the ordinary ones), but more in Hefang Street. Stores of Wangxingji Fans (王星记扇), Zhang Xiaoquan Scissor (张小泉剪刀) are both there. Most recommended place to watch handicrafts are as follows.

Midachang Store (宓大昌烟店): Midachang Store is a shop and exhibition hall of tobacco where you can have a sight of the history and culture of tobacco and smoking set. In the center of the main hall, there is a huge tobacco stem with a weight of 102.5 kilograms and height of 5.06 meter. It is available for cigarette. In the exhibition hall, smoking set of different district and different periods are on display. You can see an eburnean hand-shaped cigarette pipe which means victory, bass cigarette pipe from Tibet, a great number of fine hookahs.

Wuyue Family (吴越人家): Wuyue Family in Hefang Street is a hot shop for selling some articles of daily use and clothing supplies which are made by blue cloth with design in white. This cloth is also called Medicine Spot Cloth. It is weaved with pure cotton obtained from indigo plants. This amazing and elegant design is loved by many tourists, and most people like to buy some souvenirs here. You get an opportunity to watch the process of spinning, weaving and embroidering. On the exhibition hall, you can admire these delicate clothes and quilt series.

Countless roadside markets on two sides of Hefang Street can give you great fun as well. No matter in daytime or night, colorful candies, sugar paintings funny handicrafts, lively figurines, tasty snacks, and sweet beverage are all waiting for you to choose. Purchasing some as a gift to friends and family or just strolling on the busy street, tourists can feel the delight and kindness of local people. 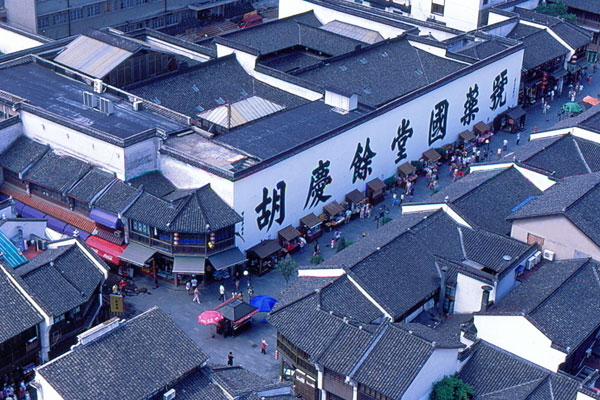 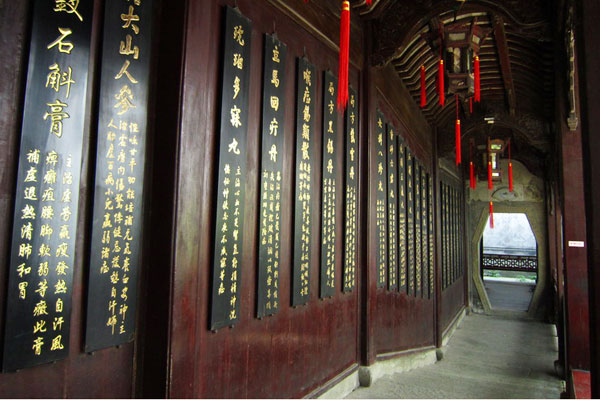 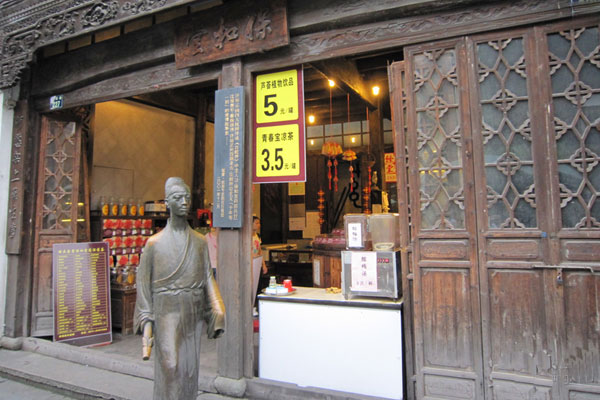 The Front Gate of Baohe Tang & Statue of Xuxian 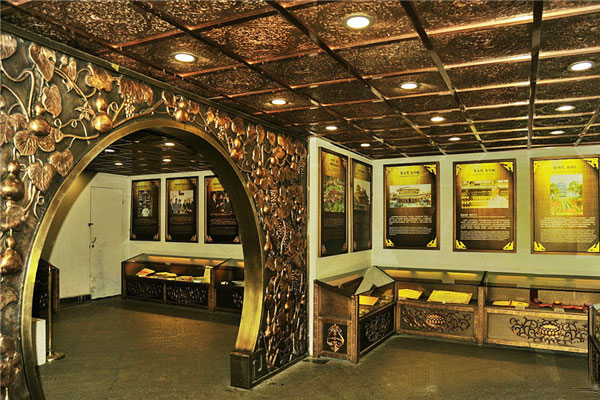 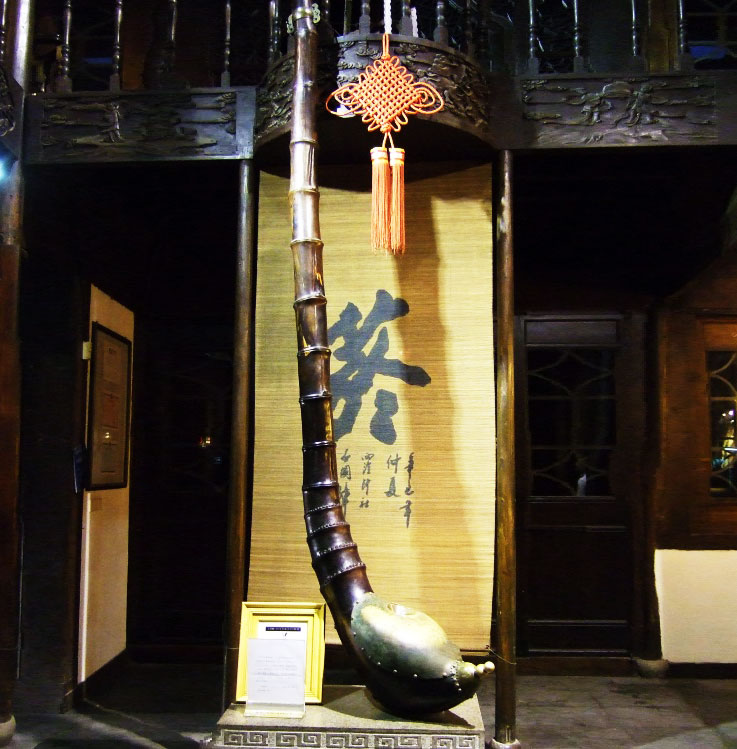 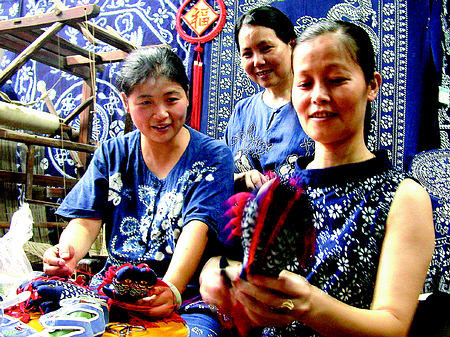 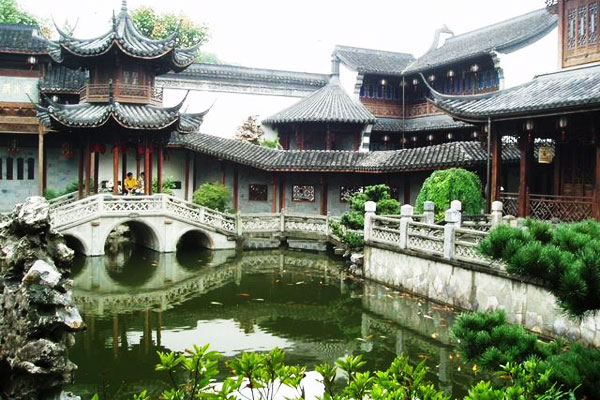 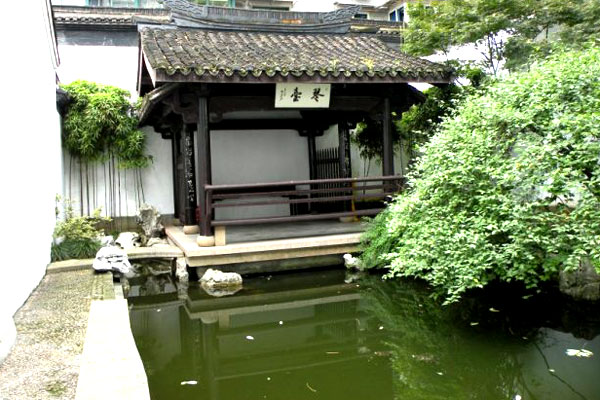 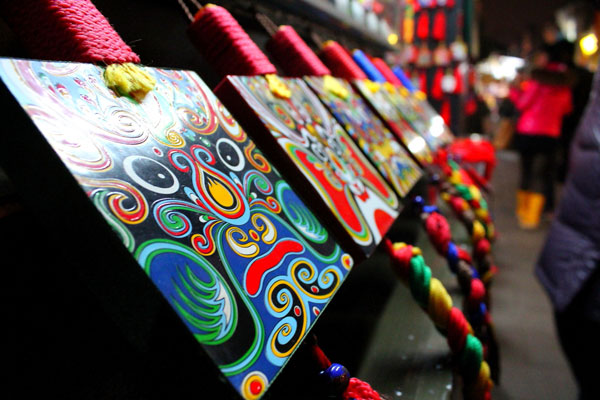 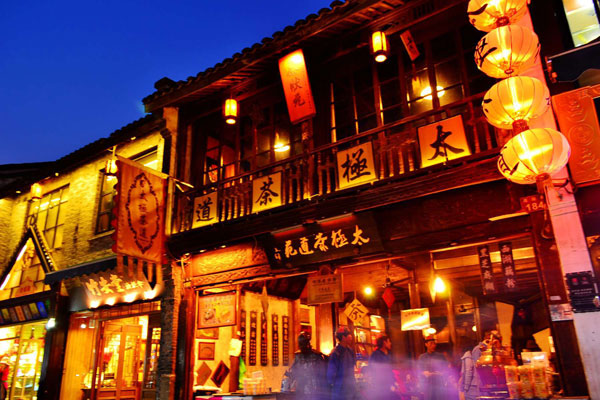 Delicate Handicrafts in the Roadside Maket

Hefang Street is located in the west part of Hangzhou city, and can be reached conveniently.

Metro Line 1 will have a stop in Dingan Road which is about 1 km from Hefang Street. With 10 min’s walk, you can get to Hefang Street.

If you want to get rid of hustle of public transportation and troublesome navigation, you can book a private tour package which covers sightseeing, dining and transfer from us. Our local tour guide and driver will escort you to Hefang Street with speed and convenience, and take care of all the details. You just need to focus on sightseeing. 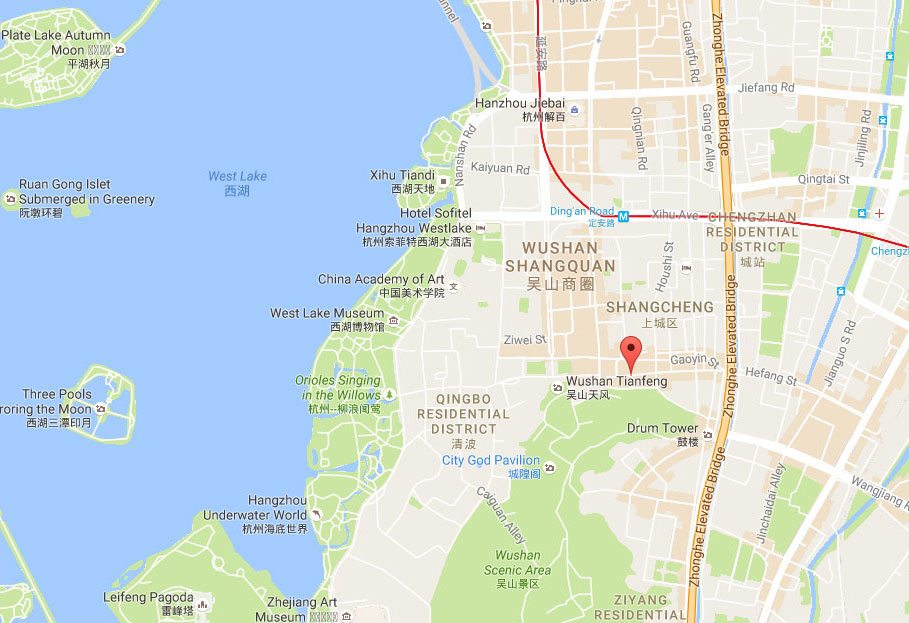 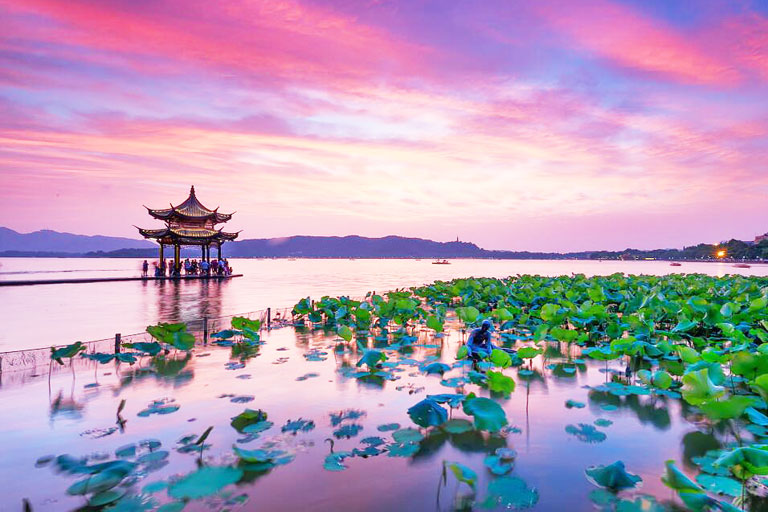 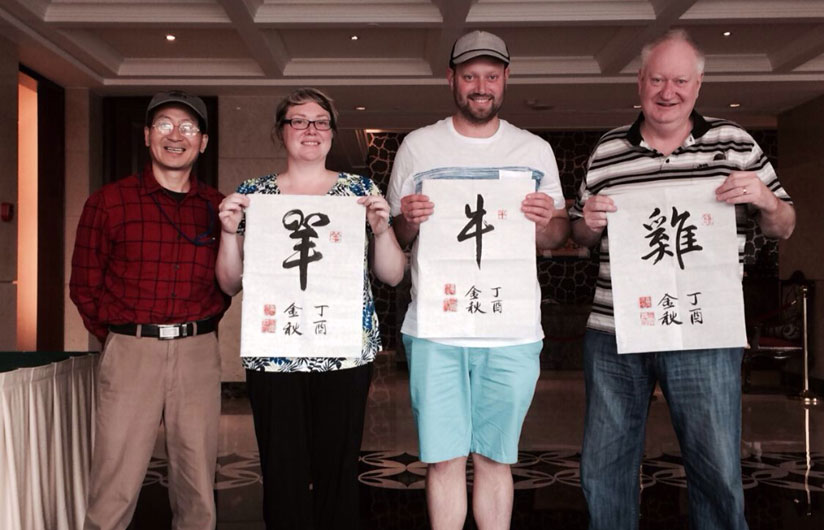 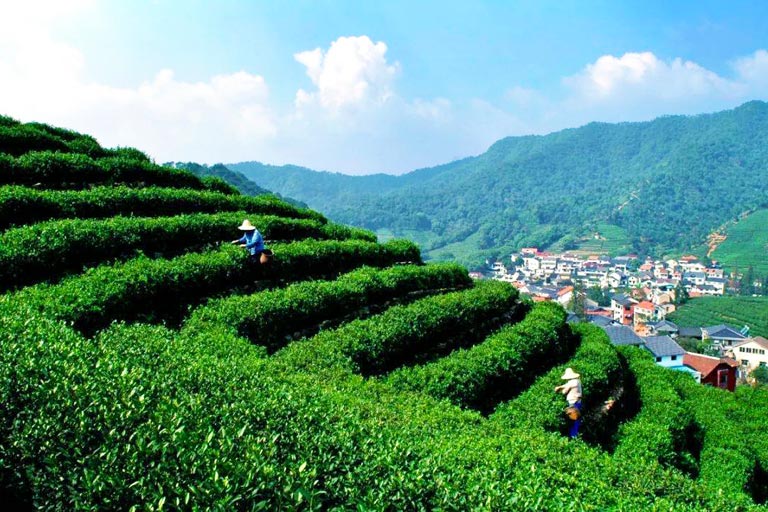 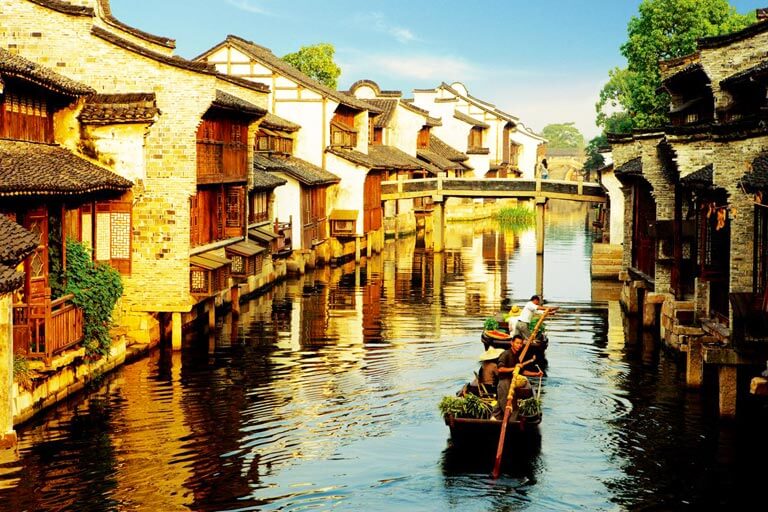