Why Visit Zhangjiajie in Winter

Since it is cold and dry in winter in Zhangjiajie, why are you recommended to visit Zhangjiajie in winter? Here are our top 3 reasons:

Zhangjiajie including the famous Zhangjiajie National Forest Park is often green in spring, summer and autumn. BUT, when winter comes, the parks will be dressed into white and silver by pure snow, being a mysterious fairy, which is quite different but so appealing compared to its sceneries in other seasons. And you will easily make some rare but awesome photos for many thumbs-ups.

2. Off Season to Avoid Crowds

Winter belongs to the off traveling season of Zhangjiajie, so fewer tour groups visit this city. If you travel Zhangjiajie in winter, you can have more relaxing time on the sightseeing and less time on the queuing line for the cable car and photo taking.

As in the off season, entrance fees in most tourist areas in Zhangjiajie are offered with a great discount. Besides, most restaurants and hotels also give much lower prices to get more guests, with an average discount up to 30%. So, it will save you a lot of budget to travel Zhangjiajie in winter. 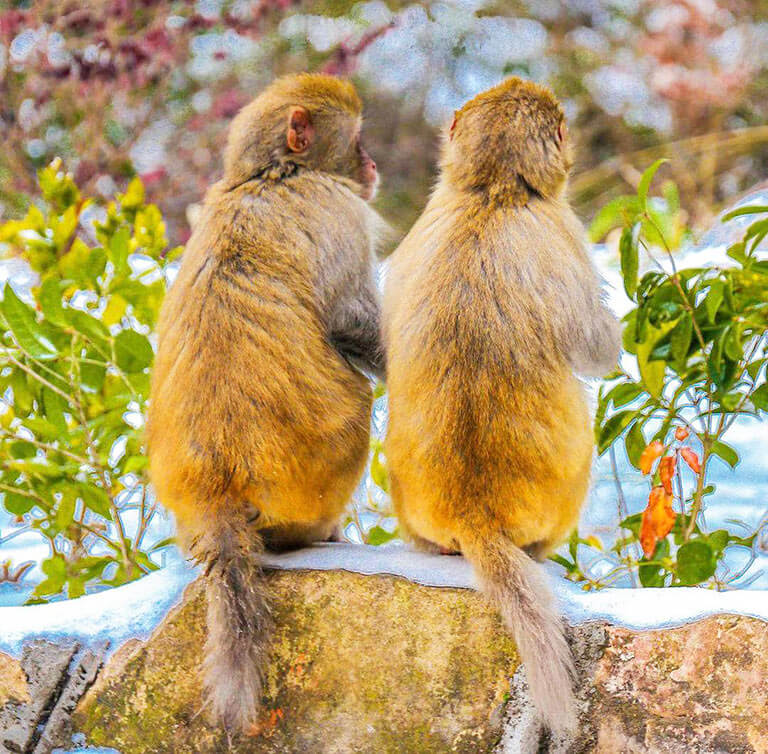 December is the early winter of Zhangjiajie City. The average temperature is around 7°C (45°F), with the daily highest temperature at around 12°C (54°F) and lowest at around 4°C (39°F). It rains least in December in Zhangjiajie, with the average rainfall at only about 35mm, so you can enjoy fewer slipper ways up to the forest mountains. Sunset of the month usually during 17:40-17:51, so to keep you safety on most mountainous attractions, it is better to go down the mountain early.

Actually, January is usually the coldest and driest month all years round in Zhangjiajie. The temperature usually varies between 2-9°C (36-48°F) in one day, and average data is around only 5°C (41°F). So you are most suggested to wear warm clothes to keep your temperature. Besides, it usually snows in late January.

February is slightly warmer than January in Zhangjiajie, and similar to December, with the tempterature changing between 4-11°C (39-52°F). It also rains rarely, and the average rainfall is 50mm for the whole month. However, early to middle February is the duration for snow in Zhangjiajie. Moreover, as the traditional Chinese lunar New Year is usually celebrated in February, sometimes in January, visitors can feel the rich atmosphere if traveling Zhangjiajie around the festival. 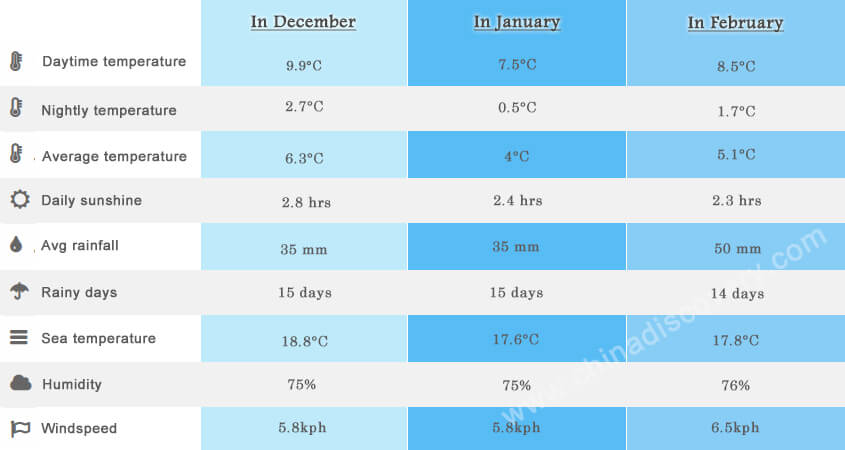 Top Things to Do in Zhangjiajie in Winter

In winter, you will have a rich series of interesting things to do in Zhangjiajie City and experience its charm and fun greatly, such as admiring the peaceful white National Forest Park, taking some beautiful winter photos, enjoying relaxing hot spring, tasting local Tujia flavors, watching impressive shows, etc. Check details at below.

Zhangjiajie National Forest Park is usually green, but in winter, it is changed into a peaceful white fairyland with the lucent snow covering the peaks, trees, and the whole forest, with only some yellow and chocolate sandstone part of the pillars showing in the air. Apart from your fresh and awesome sightseeing with continuous wows on the hard-to-see Zhangjiajie National Forest Park in white, you can also take the rare chances to create some precious photos of what you see. The thousands of mountain pillars decorated with white are so wonderful to fill your frame. However, every time when it is clear up after snow, the glizzard snow and rime will be ignited so shining by sunshine and make the trees like being made of diamonds, and there are usually some light mist lingering among the mountains, with the azure sky being the backdrop, the scene can be really called marvelous! Moreover, sometimes, you may meet the wild monkeys playing on the tree, do not touch them, but just watch quietly and listen to the chatting between nature and the mountain spirits. 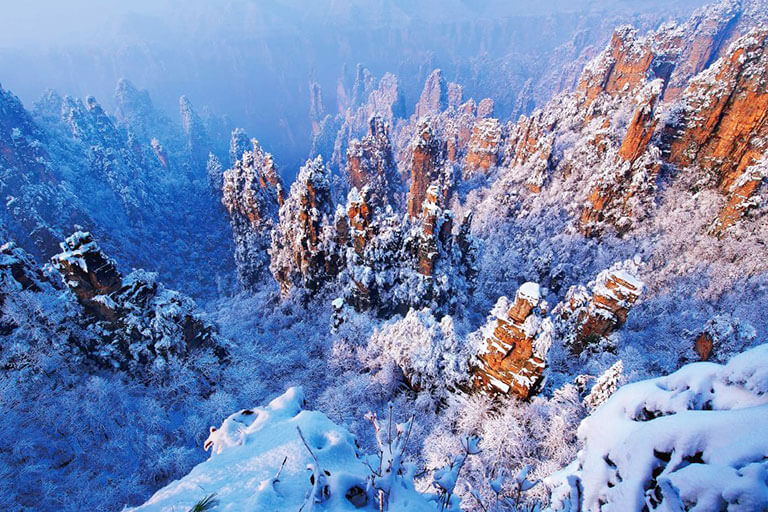 As an inside attraction, Yellow Dragon Cave is also suitable to visit in winter, particularly if you want to keep warm. The typical Karst cave reputed as the “A Wonder of Cave on Earth” and “An Enchanted Palace under the Ground” has a lot to discover during your wandering along the winding paths. Shaped for millions of years by the amazing skill of nature, the cave now has 4 layers and houses millions of peculiar stalactites and stalagmites, dressed by glorious lights, the underground palace is really worth for your exploration. 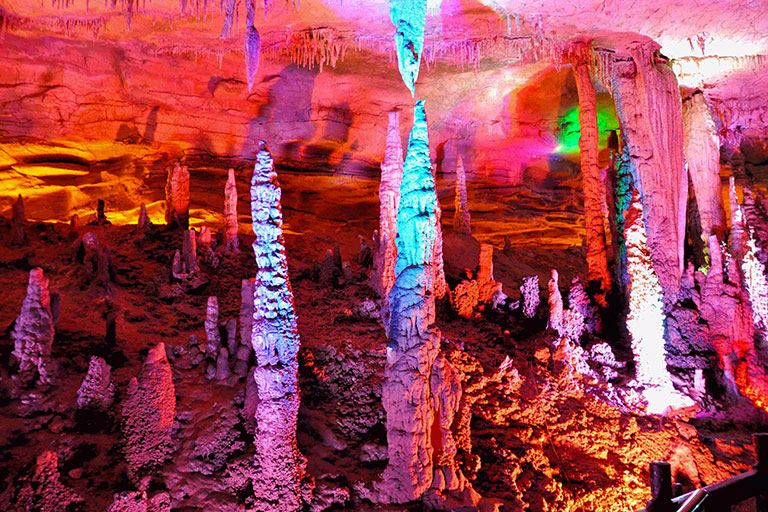 Release Your Body with Hot Spring

It is really a big joyous thing to get fully released and warm your body in a cold day. During your trip in Zhangjiajie, you can absolutely spend some time to take a bath in hot spring there to take all your nerve and tiredness far away. Since most top hot spring resort are in Cili County and needs more than 1 hour driving from Wulingyuan downtown, if you have enough time, you can arrange the enjoyment of hot spring in the afternoon or evening, and have one night stay there for a further relaxation.

Tianmen Mountain is more than exciting in winter. On the long cable way, you will see the earth covered by white snow. But more importantly, the winding 99 turned Avenue toward Heaven will be drawn by the snow into a silver dragon sleeping among the mountains. Furthermore, on the deck on the peak, the wide area of the surrounding mountains is capped into white in front of you for an incredible sightseeing.

Learn more about Tianmen Mountain and Its Thrilling Experience >>

Zhangjiajie has many Tujia ethnic group people. In winter, you are recommended to try their characteristic Tujia flavored special cuisines, especially the Xiasanguo dish with various kinds of preserved meat and vegetables stewing together to combine their flavors and nutrition. It is a very popular dish in local to keep warm in winter. 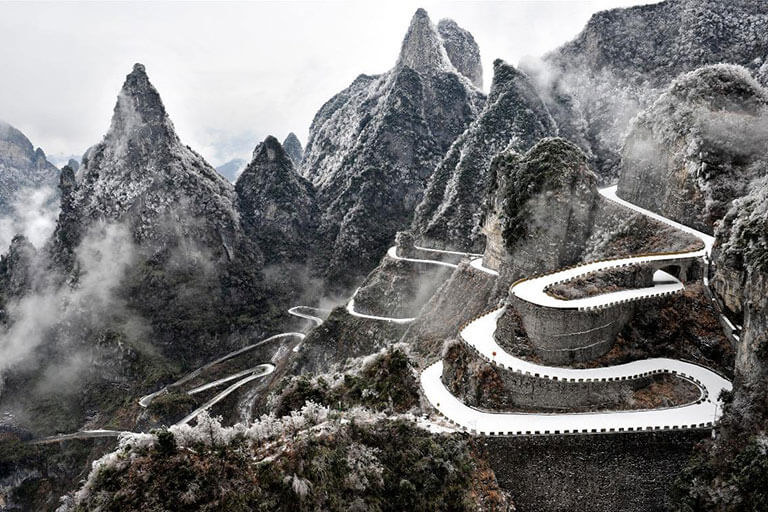 Avenue toward Heaven at Tianmen Mountain in Winter

Besides, there are far more things to see and do in Zhangjiajie during winter. You can still visit Zhangjiajie Grand Canyon to walk on the risky Zhangjiajie Glass Bridge, enjoy view of Baofeng Lake, watch the complimentary Charming Xiangxi show and Tianmen Fox Fairy show, have a leisure roam at Buxi Street with the colorful night lights and busy night markets, etc. For more interesting attractions and activities, please check Top 14 Zhangjiajie Attractions and Best Things to Do in Zhangjiajie >>.

What to Wear in December, January & February

It is cold in Zhangjiajie during the three winter months, however, that is not that severe to weather in northern part of China. With the average temperature of around 4°C, lower than 10°C, it is suggested to wear thick outwear, like down jacket, winter jacket to keep warm and keep away some winter on the mountain. Besides, warm shirts and sweaters, thick pants, etc. are suggested. To keep your hands, feet and head warm during the most outdoor trip, it is better to pack your winter gloves, scarves, warm socks, hats, etc. No matter when you visit Zhangjiajie, you are advised to wear comfortable and antiskid shoes like trainers for the multiple mountains ways to walk. Besides, sunblock is suggested anytime to care your skin. Moreover, sunglasses are also great for the not many but some sunny days in Zhangjiajie. 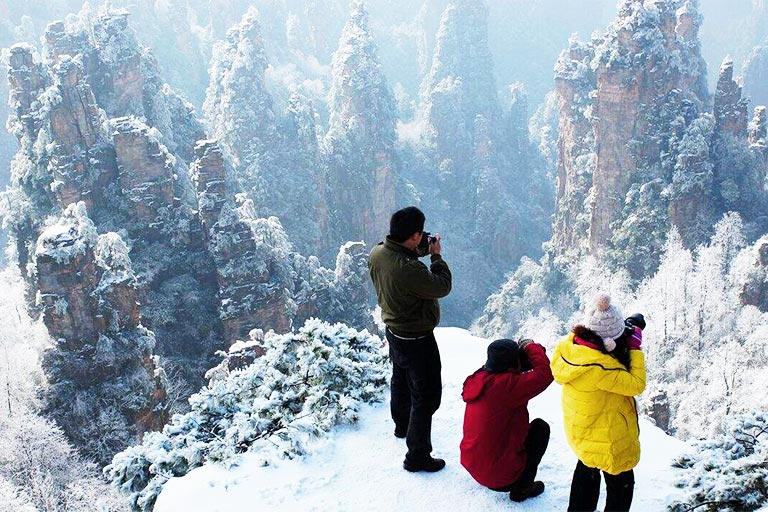 What to Wear in Zhangjiajie in Winter

There are a lot of walks during your visit of Zhangjiajie National Forest Park and the ways are a little slippery if there are rains or snows. You are highly advised to wear comfortable, warm and antiskid shoes during your winter visit in Zhangjiajie, and more, walk slowly and carefully for safety.

It usually snows in late January and early or late February in Zhangjiajie, and nearly every time after the snow, you can take great beautiful photos of the snow sceneries and clear blue sky. However, weather changes frequently on mountain areas in Zhangjiajiajie, and the visibility is very low during snow, so keep up with the weather forecast if you plan to take photos at Zhangjiajie National Forest Parka and Tianmen Mountain. Furthermore, temperature is very low on mountains, so take more batteries keep your camera and battery warm to save the power.


How to Plan your Zhangjiajie Tour in Winter

You may also want to visit Zhangjiajie in winter to escape from the crowded groups in peak seasons and appreciate the quite different forest park and Avatar Mountains covered by white snow. To enjoy the highlights in the hot destination, it is a good idea to spend about 2 to 3 days in the north of Zhangjiajie City, about 30~40 kilometers away.Zhangjiajie National Forest Park, Yuanjiajie and Tianzi Mountain are usually combined into a two-day itinerary. Furthermore, Yellow Dragon Cave, Baofeng Lake and Zhangjiajie Grand Canyon & Glass Bridge can be visited in one day. To travel in-depth with a visit to Tianmen Mountain, it will take another day, forming 5 days’ itinerary. You can go as following: 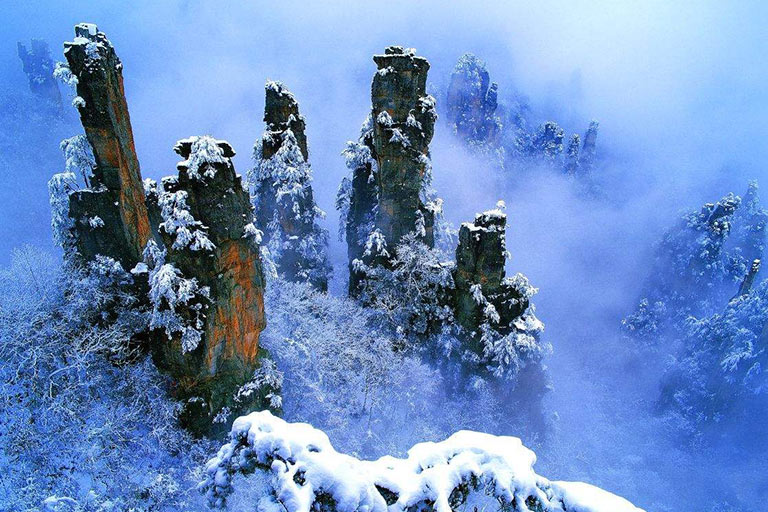 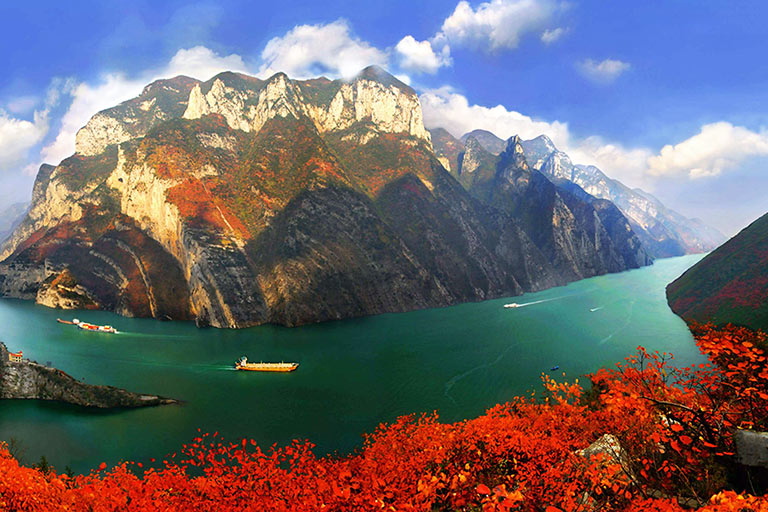 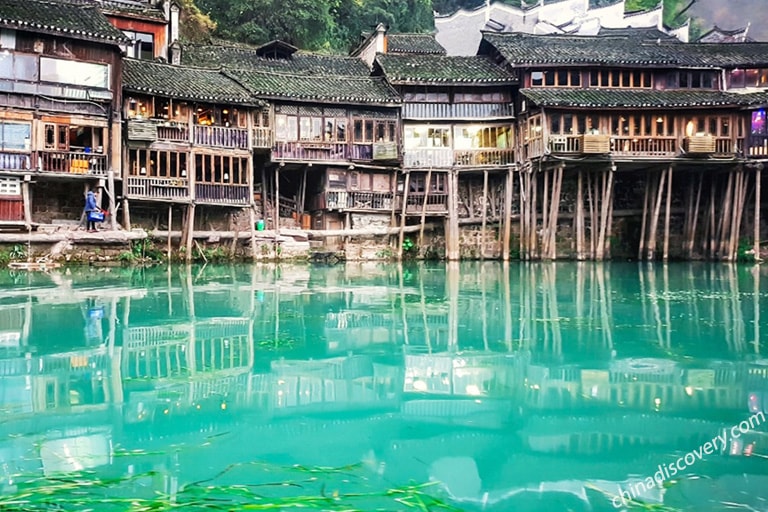