Being the most colorful province of China with the richest kinds of minority groups, Yunnan boasts various unique ethnic festivals to be explored. The ethnic festivals promoting their unique folk traditions and customs of different ethnic groups will give visitors amazing surprises!

Indeed, every year there are upwards of 78 official ethnic festivals throughout Yunnan’s 16 districts! And here, our Yunnan Festival Guide will introduce you Top 5 Fascinating Ethnic Minority Festivals in Yunnan, which will give you options in different seasons! If you happen to visit Yunnan during the festival times, participating in any of them will add a unique and unforgettable dimension for your Yunnan tour! 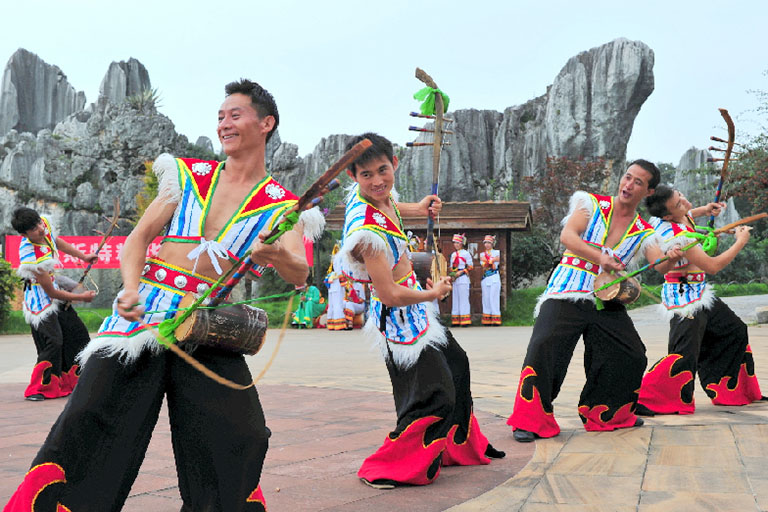 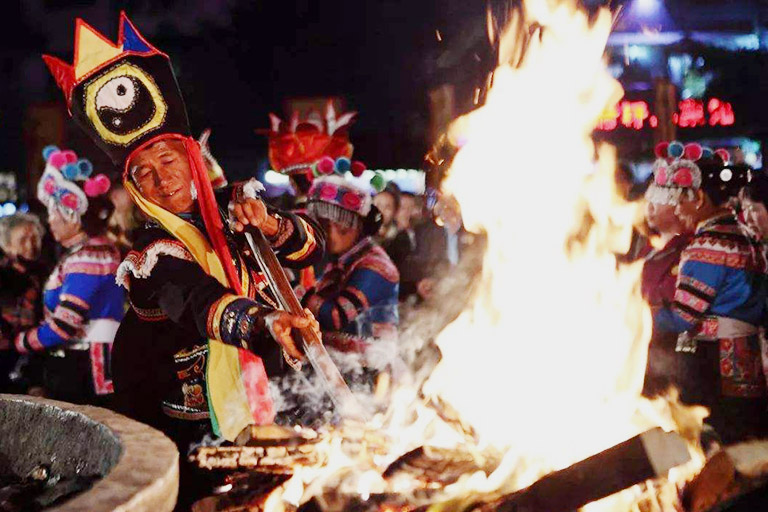 • When: 24th~26th day of 6th month of the lunar calendar (usually mid-July or mid-August)

With the reputation of “the Oriental Carnival”, Torch Festival, of course, is the most wide-known and most profound ethnic festival of Yunnan. Torch Festival is actually celebrated by a large number of minority groups, like Bai, Jino, Naxi, Yi, etc. However, it is typically considered a Yi Festival. Ancient ancestors awed by the strong force of fire. Yi People, in particular, regarded fire as invincible gift. As old legend says, angered gods once sent a plague of locusts down upon the Yi people as punishment. The Ancient Yi People created giant torches around the villages to fend off the pests. And they finally succeeded on the 24th day of the sixth lunar month. Since then, this day became a significant festival day for Yi People.

Yi Torch Festival usually lasts 3 days from the 24th day of the sixth Chinese lunar month. During the festival, Yi People will build huge torches at open squares, and people in the villages will light torches in front of their homes. The festival culminates in a massive bonfire at night. Burning torches light up the nights as woman and men, young and old dance and sing traditional folk songs around the campfire.

For visitors, the best place to participate in this big event is Stone Forest in Kunming, where you will be welcomed by not only dancing and singing but also various games like bull fighting. Besides, Chuxiong Yi Autonomous Prefecture (楚雄) is also a good choice, because you will find the grandest Torch Festival there. 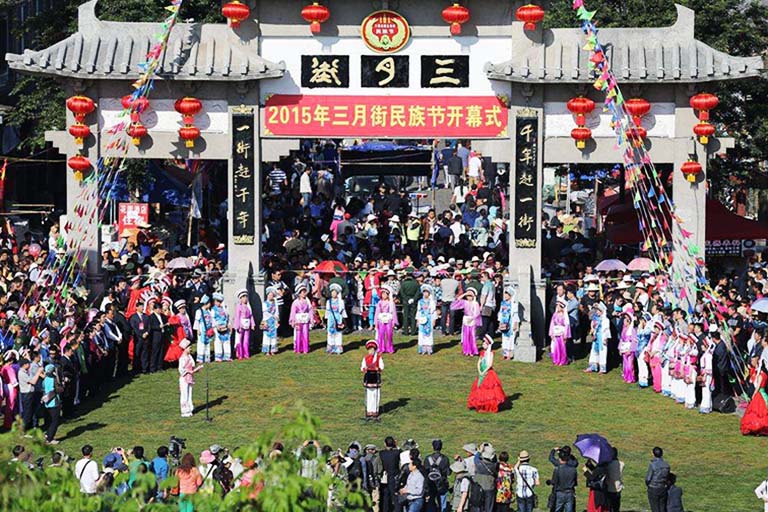 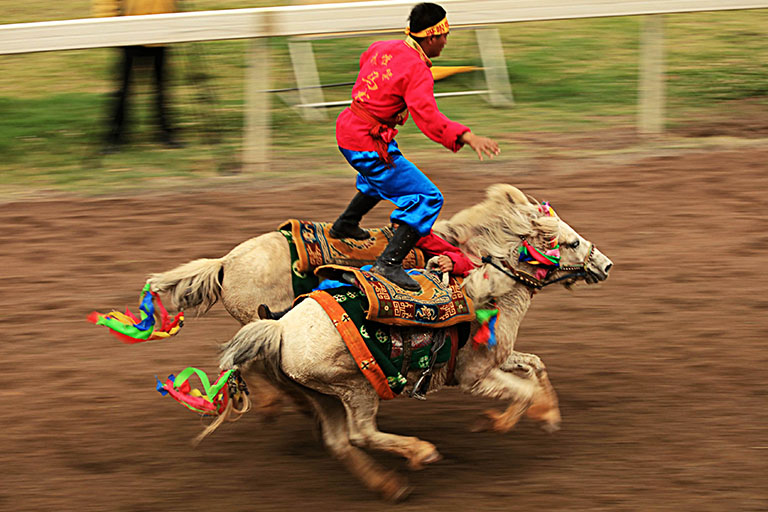 • When: the 15th day of the third lunar month (usually late-April)

• Best Place: Just outside the west gate of Dali Ancient City, at the foot of Cangshan Mountain

March Fair is also known as “Guanyin Fair” or Kwan-yin Fair, because it is said this fair was established to worship the god Avalokitesvara. As the old saying goes, it was on the 15th of March the god Guanyin came to Dali for preaching. There are also other legends say that March Fair was firstly built to commemorate a hero who rescued the locals from an evil men named Luosha. And with time goes by, the fair has gradually become a prosperous trading market. Though these legends fail to give convincing cues for the exact starting year of this occasion, they show the March Fair has long been a grand festival for the ancients.

Today’s March Festival is opened at the foot of Mount Cang, just outside the west gate of Dali Ancient City. The festival event is usually held from the 15yth day to the 21th day of the third lunar month. Wonderful traditional performances, horse racing and sports meet as well as sales of local specialties will be given during the fair. 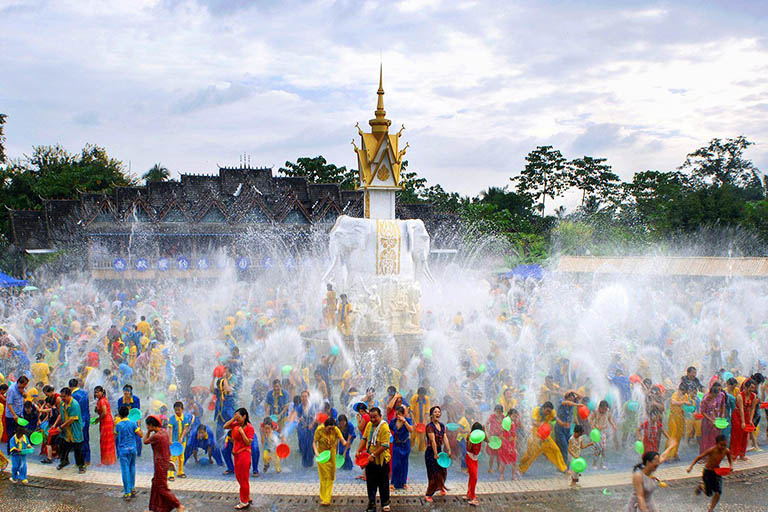 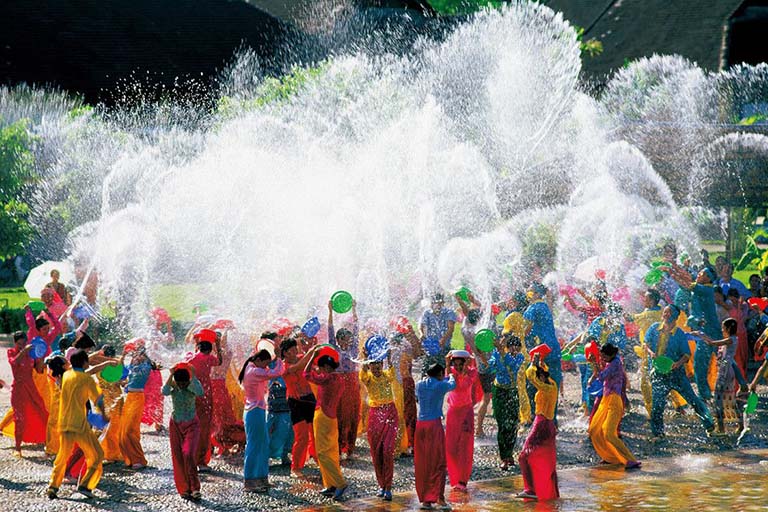 You may have heard a lot about Water Splashing Festival held throughout Southeast Asia. And in China, the Dai minority group also celebrates the same festival. Dai people are manly living in Xishuangbanna, the autonomous prefecture of Yunnan Province neighbors Laos and Myanmar to its south. Due to the close distance to Laos and Thailand, the people in Xishuangbanna have influenced a lot by the Thai and Laos culture. So it comes no surprise they has the similar Water Splashing Festival. The festival has roots in Buddhist purification rituals that believe it will bring good luck for the coming year when the water is dumped over the heads of the celebrants.

The official Water Splashing Festival of Xishuangbanna usually comes in mid-April. When the festival starts, it means you may get wet at the moment you getting off a taxi in Jinghong, the city central area of Xishuangbanna. And everyone close to you will be glad to give you “a free shower experience” on the street. If you are luckily attacked by both large water guns and buckets of water, congratulations, you will get super good luck during the following year! 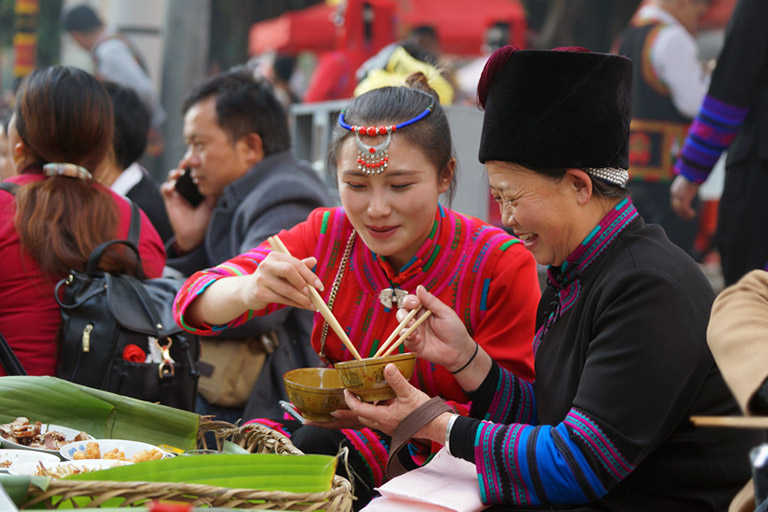 • When: the first dragon day of October in lunar calendar (usually late-November)

• Best Place: Villages near Yuanyang Rice Terraces (about 320km and 5.5~6 hours south of Kunming, the capital of Yunnan Province)

The annual harvest season of Hani minority group usually comes in August and September of lunar calendar. And the happy Hani New Year will be followed. Since their New Year is celebrated in October of lunar calendar, they also call it Hani October New Year. Unlike the common Chinese New Year held in January or early February you’ve already known, Hani people will celebrate their New Year in October, because this month is considered as their richest and most leisure time of a year. During this time, they would like to share their goods and happiness with their family, friends and neighbors!

To most notable ceremony of their New Year is the Long-table Banquet. The Hani people will take their unique tables made of bamboo to the streets and then line the tables up, forming a long dragon-like queue of tables. Delicious and rich kinds of dishes will be presented on these tables, and people will seat at the two sides for dining. The Long-table Banquet will be nonetheless an unforgettable experience. And such banquets can be found at almost all the villages and counties around Hani Rice Terraces, especially the Yuanyang Rice Terraces. 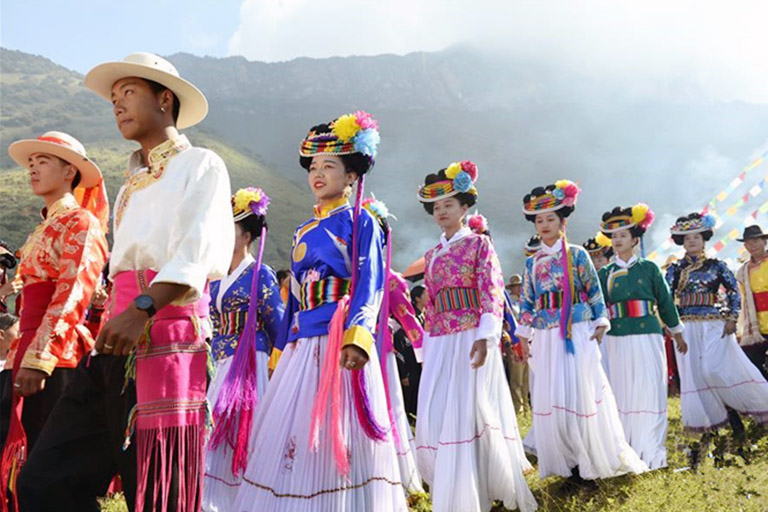 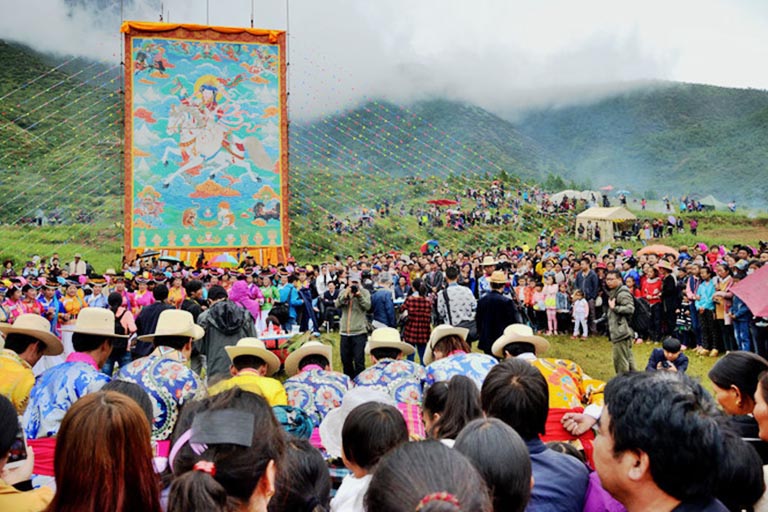 • When: 25th day of the seventh lunar month (usually August)

Every 25th day of the seventh lunar month, Zhuanshan Festival will kick off Lugu Lake. The Mosuo minority man and woman will dress them up in their best colorful folk costumes, hiking or riding to the Lion Mountain (or called Gemu Mountain) at the bank of Lugu Lake. They are heading to pray for the protection from the sacred Gemu Goodness Mountain. The highlight of this day comes with the rising up of a giant Thangka, a unique painting of the Gemu Goodness. Before and after that, folk dancing, singing and horse racing will also be offered.

If you happen to visit Lugu Lake during the festival, you can follow the long queue of local Mosuo people to take a unique cultural hiking experience!

How to Plan a Yunnan Tour

Yunnan has a reputation of the Most Colorful Province in China, which has been proved a lot by its diverse ethnic minority cultures and customs! No matter where you are going to visit in Yunnan, you will certainly be amazed by its brilliant ethnic flavor. The wonderful culture aside, Yunnan also gains its title of “colorful” for its rich kinds of natural landscapes, such as stone forest, Snow Mountains, gorges, lakes, rice terraces, meadows, national parks… There are so many places worthy your visit in Yunnan, like Kunming, Lijiang, Shangri-La, Dali, Yuanyang, Luoping, Xishuangbanna, etc.

A Yunnan tour usually starts from Kunming, the capital and transportation hub of Yunnan Province. Some may also choose to get to Lijiang first, because they prefer to visit the famous Lijiang Old Town as their first stop. Most visitors spend 6~8 days to take a classic Yunnan tour to visit Kunming, Lijiang and Dali (or Shangri-La).

If you want an in-depth Yunnan tour, you are suggested to spend 10~12 days there for more surprises. Have no idea? Check the following tour packages for your reference. All of them are chosen by our customers! Also, you can get more ideas of How to Plan a Yunnan Tour if you are interested! 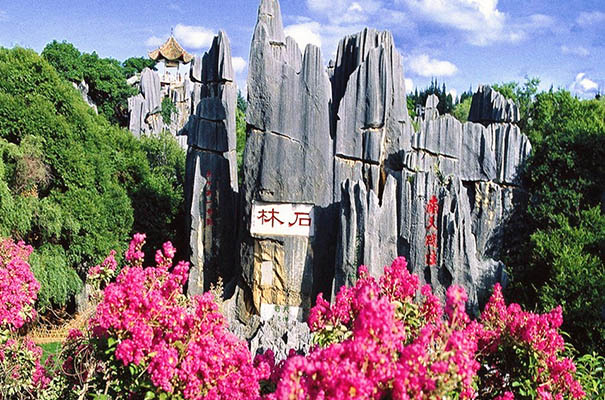 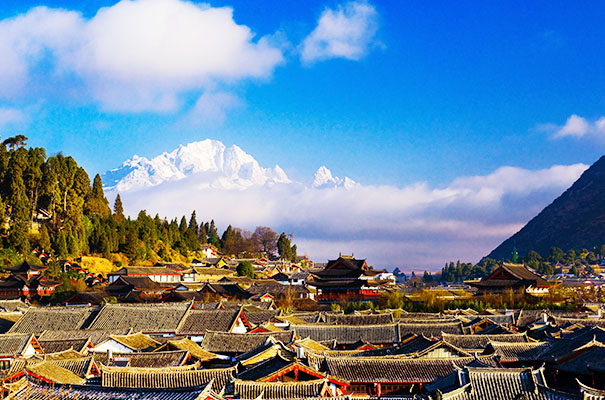 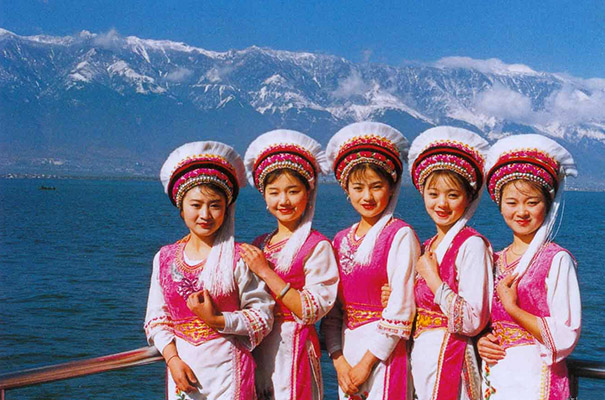 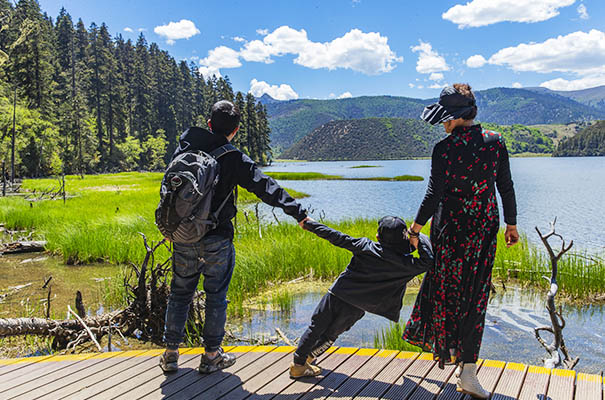 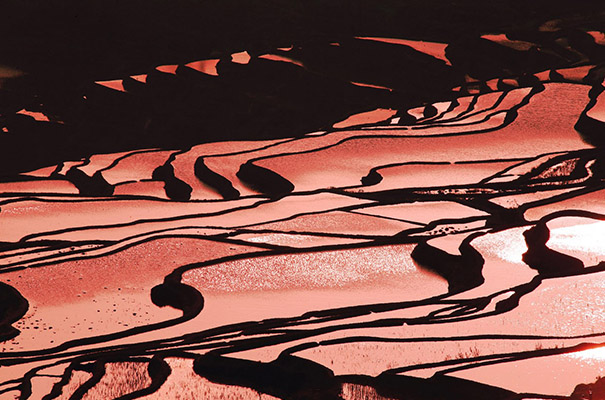 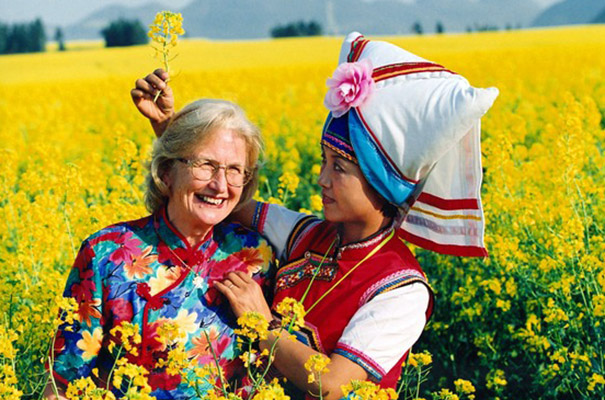 Have your own ideas of where to go and what to do in Yunnan? Customize your personal Yunnan tour right now! The tour can be tailor-made according to your group size, time, physical condition, plan, interests, budget and any other special need!

If you travel with us, our experienced local driver and guide will tack care of everything for you. Our professional driver will await you at the entrance gate and then escort you to your next destination directly in ease and convenience. Besides, our English-speaking guide will accompany you all the way and give you warm insider tips of avoiding offending local custom taboos. If you are interested, please feel free to let us know! 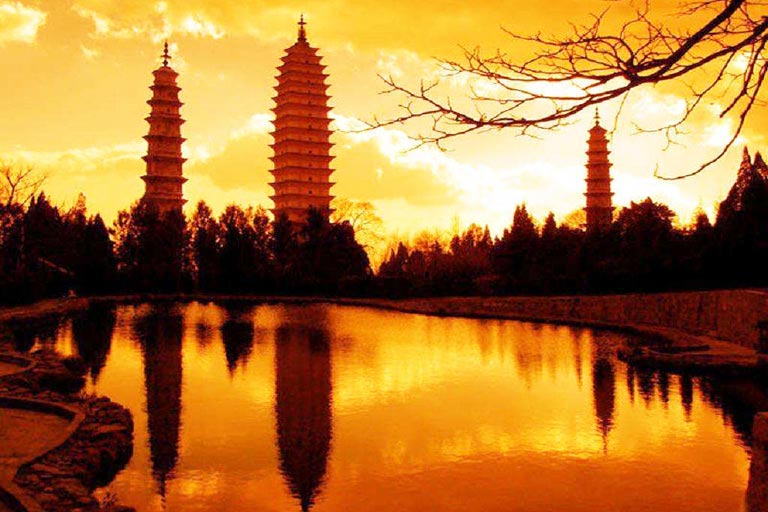 Historically, culturally and geographically, Yunnan Province is one of the most diverse and alluring destinations in China. In the 8 days, you’ll visit Yi, Bai, Naxi ethnic groups’ land and the legendary Shangri-La. 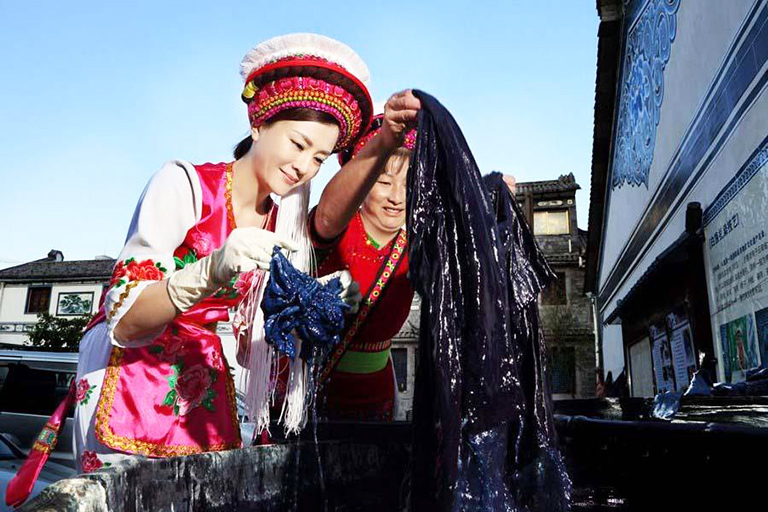 This 7 days tour is the unique tour specially designed for travelers who not only want to explore the iconic attractions in classic destinations (Dali, Lijiang and Shangri-La), but also do something special with involvement in Bai, Naxi and Tibetan people’s life. 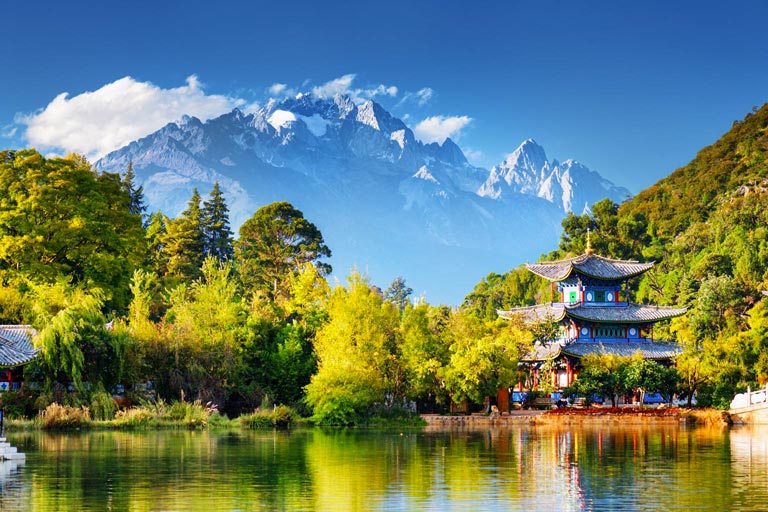 It’s hard to comprehend all that Yunnan has to offer until you get there. This tour covers the highlights of amazing Yunnan, including TOP landscape of Kunming, Dali, Lijiang and Shangri-La, as well as Yuanyang Rice Terrace. Just go and explore the most aspects of our planet with us.