Sera Monastery in Lhasa is one of the "top six main monasteries of Gelug Sect of Tibetan Buddhism" and regarded as the "three great Lhasa monasteries" together with Drepung Monastery and Ganden Monastery. This monastery not only is famous for its heated Buddhist debating, but also enjoys good reputation among visitor by its rich Buddhist culture, particular buildings, abundant cultural relics and artifacts, and so on.

Sera Monastery is one of the “Six Main Monasteries of Gelug Sect of Tibetan Buddhism” in China. And also, it enjoys the honor of the “Three Great Monasteries in Lhasa” together with the famous Drepung Monastery as well as Ganden Monastery. Situated at the northern suburb of Lhasa, and with flourish wild rose growing, about 3700m above the sea, this monastery got her name of Sera, which means wild rose. Sera Monastery is called Sera Mahayana Buddhist Monastery in full. Visiting the sacred Sera Monastery, you can see the local monks debating about Buddhist knowledge, appreciate special buildings of Gelug characteristic, enjoy historic relics for over hundreds of years, and get close to the special festivals, etc.

In 1419, a disciple of Tsongkhapa called SakyaYeshe founded Sera Monastery and completed in 1434. From then, 3 dratsangs and Kangtsangs stand there in featured style of Gelug Sect and serve as the places for monks learning Buddhist culture. And according to the history, there were more than 8000 people there seeking for the holy Buddhism.

What to See & Experience in Sera Monastery

Many monks usually gather here in the debate courtyard in the most north of Sera Monastery and wait for the start. You can see one monk sitting there in front of a standing monk who debates in intense words and exaggerated gestures to strengthen the debating heat, and an advanced monk usually has two to several monks of equal level sitting in front. The standing monk comes up with questions, and the sitting one has to answer immediately and cannot ask questions. Till he cannot answer the Buddhist questions, he is announced to be failed on the debate that day. On the next day, they change their “role” and have another fierce debate.

During the debate, the standing monk uses different exaggerated gestures to enhance his power and distract the attention of the answer. A clap of hands means urging for the answer from the other monk, and a pull of the Buddha Beads represents to defeat the other one with the help of the power from the Buddha. You will just find such debate very interesting and really worth to see.

There are a series of worth-visiting places in Sera Monastery, which have more than hundreds of years old and stand for the featured style of Gelug Sect of Tibetan Buddhism.

But the Tsochin Hall first built in 1710 is highly recommended to pay a visit, because it is the largest hall of nearly 2000 square meters in Sera Monastery and has a lot to see. Going to Tsochin Hall or called the Main Assembly Hall in the northeast of Sera Monastery, you can see tens of pillars upholding this holy building constructed with rich brass. You will feel very lucky to appreciate the Kanjur in 1410, which is the first printing version of Buddhist text in Tibetan language and is the top treasure of this monastery. What’s more, you can appreciate many vivid statues of Dalai, Bodhisattva, arhats, etc. in exquisite carving. The decorations of jewelries, birds, human beings, etc. of rich Buddhist religious atmosphere make this building more magnificent and fancy.

Apart from that, you can go to the Sera Je College that is the largest Sera’s college to study the Buddhist knowledge and was first built in 1435. Inside is worshipping the statue of Hayagriva who is a protective deity in Tibetan Buddhism and whose name means the “horse head”. This statue is so popular that a lot of people come to Sera Monastery to pay respects to him for blessing and driving away evil forces. Moreover, you can see many stupas and statues in the north part of this palace, especially those of the Past, Present and Future Buddha, and so on.

Since Yongle Emperor in Ming dynasty has given Sakya Yeshe lots of precious items when he returned to Tibet from Beijing in 1416, you can appreciate these historic relics of about 500 years in Sera Monastery, from Buddhist texts, Buddha statues, mafors to gold and silver wares, etc. You can not only see the over 500-year statue of Sakya Yeshe still in bright color, but also appreciate more than ten thousand of gold and brass Buddha statues made in Tibet, brass Buddha statues, classic texts, frescos, Thangkas, and Buddhist musical instruments from India, and many colorful stone paintings expressing the worship of people, and so forth.

Among all the festivals in Sera Monastery, the Sera Bengqin Festival is grant and unique, which means the blessing festival of the “vajry pestle” that is a dagger of exorcism. It is said that in the 15th century, a dagger of exorcism was transmitted from India and on every morning of December, 27 of Tibetan calendar, about during the late January in the Gregorian calendar, it would be sent to Potala Palace and presented for Dalai Lama who would bless this dagger. Then it will be sent back to Sera Monastery, and the Khenpo in Sera Ngapa Collage would bless all the monks and visitors holding this dagger to mean they were all blessed by the Buddha, Bodhisattva, and protective deity. From then, every year on that day, more than 10 thousand believers come to Sera Monastery and wait for the blessing. 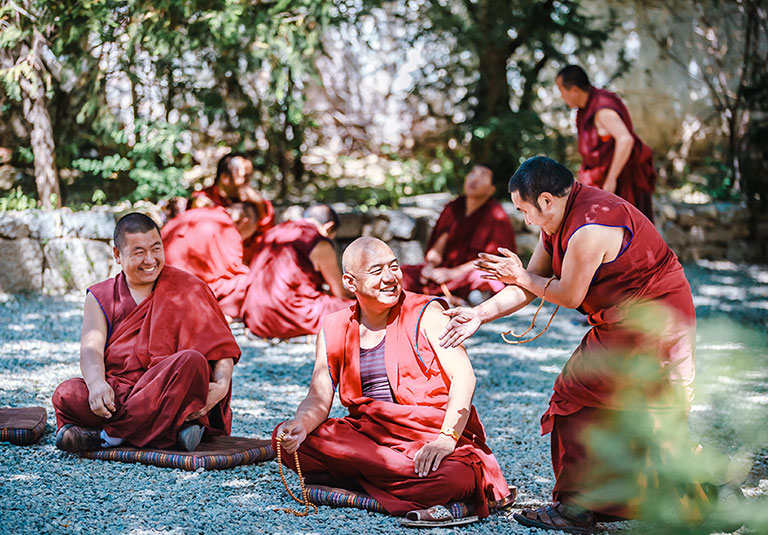 A Monk Debating with Three Monks with Exaggerated Gestures 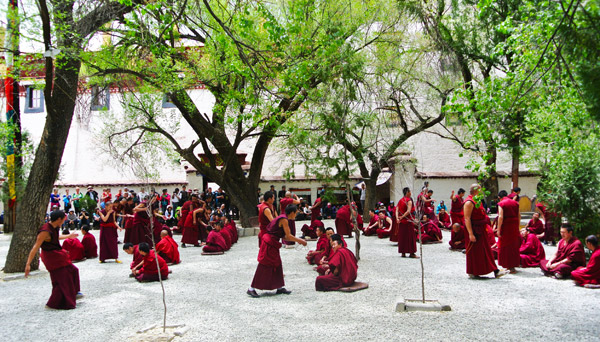 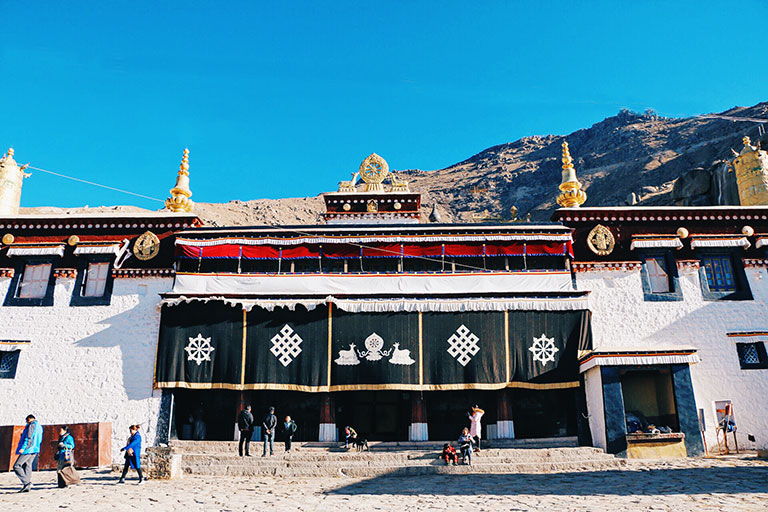 Tsochin Palace of over 300 Years Old 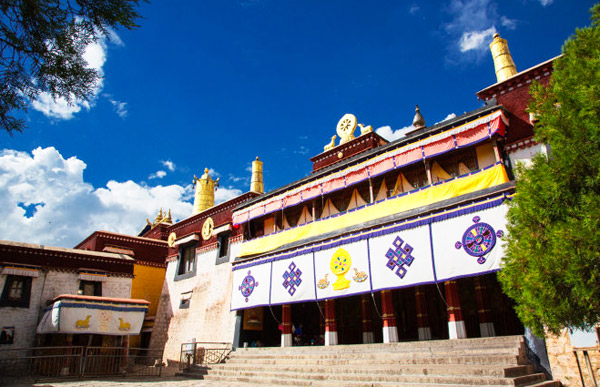 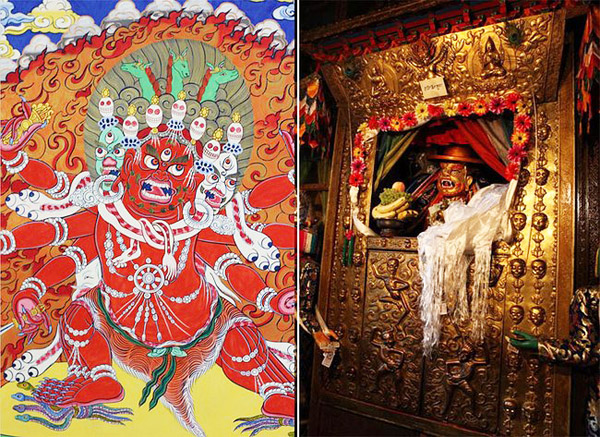 Statue and Painting of Hayagriva of High Reputation 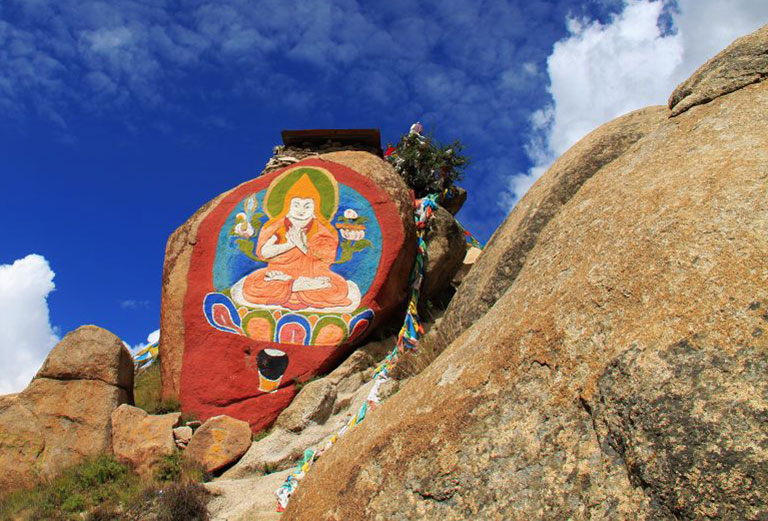 Colorful Painting on the Stone

Enter the Sera Monastery to visit Tsochin Hall to see the Kanjur in 1410 of high value, and then go to Sera Je College to appreciate the statue of Hayagriva and statues of the Past, Present and Future Buddha. Then, you can walk to Sera’s debating courtyard to see the heated Buddhism debate. (For 2-4 hours)

How to Go to Sera Monastery

Situated at the north suburb of Lhasa, it takes about 18 min to drive from the downtown.

If you want to get rid of hustle of public transportation and troublesome navigation, you can book a private tour package which covers sightseeing, dining and transfer from us. Our local tour guide and driver will escort you to Sera Monastery with speed and convenience, and take care of all the details. You just need to focus on sightseeing. 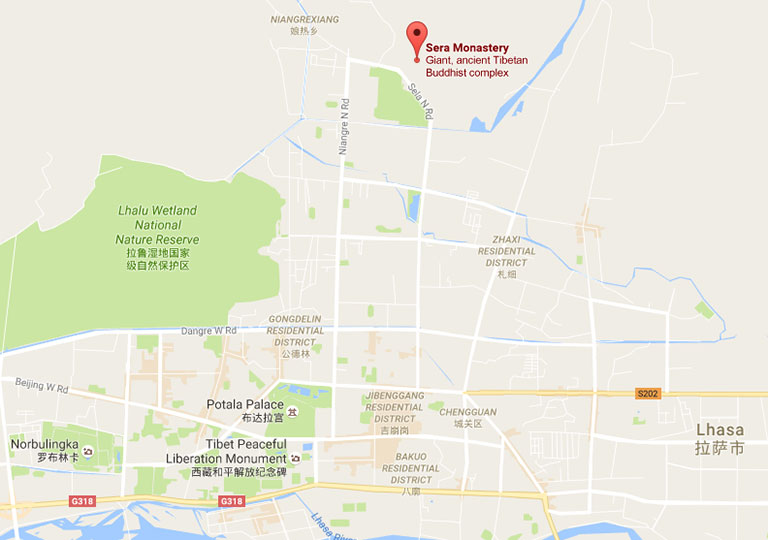 Click to Enlarge the Location Map of Sera Monastery

1. You can enjoy the panorama of Lhasa city at the rear mountain of Sera Mountain, but since the mountain is very high and needs much power to get, you can plan your tour according to your health;

2. Many palaces usually close after 15:00, so it is recommended to visit Drepung Monastery or other nearby attractions in the morning and spend the afternoon to appreciate the palaces in Sera Monastery and to see the Buddha debate;

3. Since the Buddha debate is very popular, you are suggested to walk there in advance for about 30 min to get a good location. Keep quiet while watching and photographing is allowed.

4. Don’t do vigorous activities in case of altitude stress for the Sera Monastery is 3700 m above the sea;

5. Wear Suitable to protect from the strong sunlight, but do not wear hat when visiting inside the Tibetan monasteries, and ladies do not wear skirts visiting here;

6. In the principle of Tibetan culture, walking around temples, palaces and turning praying wheels should follow the clockwise direction.

7. Follow the Buddhist manners – talk in low voice, always be respectful of others, reflect on the Buddha’s teachings, remain quiet when visiting temples… 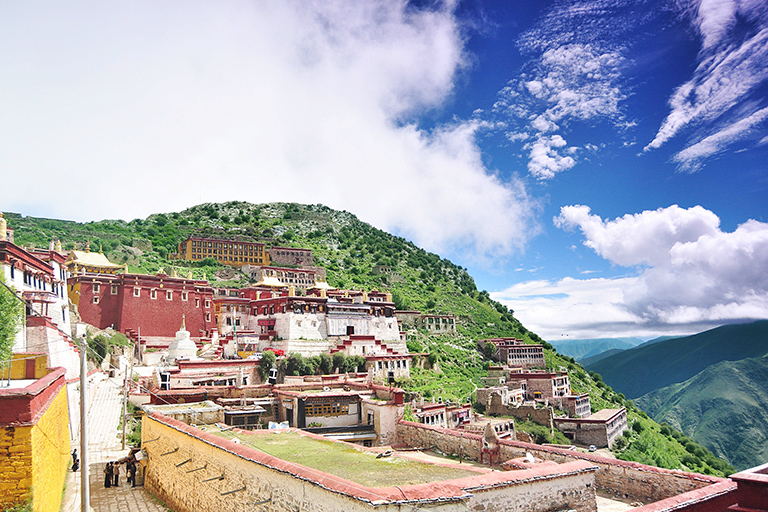