Situated in the west suburb of Lhasa, Norbulingka is a precious garden among Tibetans and called the “Summer Palace in Lhasa”. This typical Tibetan park is worth to appreciate the rare nice scenery on plateau and admire particular local palace buildings of over 200 years old.

Norbulingka at the southwest of Potala Palace is listed as the "World Cultural Heritage Site" and "National AAAA Scenic Spot". First built during the 1740 s by the 7th Dalai Lama, Norbulingka, meaning the "Park of Treasure", is also called Norbulingka Palace, Norbulingka Park and the Precious Stone Garden. Norbulingka is reputed as "Plateau Botanic Garden" as well as the "Summer Palace in Lhasa", because it is a warm growing paradise for more than 100 rare species of rare plants from Himalaya and all over the world within its 3.6 million square meters wide area.

More than that, it is a superb place to visit the featured Tibetan Buddhist buildings, since this is the garden with the most exquisite constructions in Tibet. Furthermore, it is like a "Museum of Treasure" where you can admire numerous valuable historical relics and artistic pieces for over hundreds of years. As a result, you will find Norbulingka a nice attraction with rich Tibetan culture and gorgeous garden charm.

During the 1740 s, the 7th Dalai Lama loved going to Norbulingka, so the grand minister resident of Tibet in Qing dynasty decided to build a palace for him to relax and chant sutras. In 1755, there were already many palaces and other buildings, so the 7th Dalai became dealing with the government administration here every summer after the allowance of Emperor Yongzheng in Qing dynasty. Having experienced several extensions and management, the Norbulingka shaped its ultimate look in 1954, and it is a large garden as well as museum for the public and the summer office for the Dalai Lama in Lhasa today.

What to See & Experience in Norbulingka

Since Norbulingka is regarded as the "Summer Palace in Lhasa", you can totally enjoy yourself into this "Land of Idyllic Beauty". You will be surprised while seeing the rare flowers in central China and other countries, and also, you can treat your eyes with the featured Tibetan plants and the exotic flowers and herbs from the south and north hill of Himalaya. Every blink is a great enjoyment, and with the 49 sorts of verdant towering pines and cypresses, 62 kinds of famous blossoms of peonies, Tibetan big-leaf hydrangeas, etc. in rich bright colors, reflection of blue sky and soft clouds on the peaceful lake, Norbulingka seems really like a Garden of Eden in Tibetan style.

More surprise waits for you! The zoo in Norbulingka is the only one of the highest altitude worldwide and one of the oldest zoos. More than 30 species animals, from snow leopards, lions, tigers, black bears, peacocks, Tibetan Mastiffs, dual hump, etc. are living happily there. And you can see the local Tibetan people bring yak meat, bananas, apples for these descendants of the pets of Dalai Lamas in the past.

Since Norbulingka is the park with most delicate buildings in Tibet, you can take you time to admire the fancy work of human being, to see the magnificent Podrangs meaning palaces in Tibetan, and to feel the old flavor of summer palace of Dalai Lamas.

Kalsang Podrang (格桑颇章) at the southeast corner of Norbulingka is the oldest palace here. It got its name because the 7th Dalai Lama who named Kalsang Gyatso built the palace. Visiting this ancient palace, you can see many impressing wall paintings mainly themed with the playing scenes of kids in ancient time. You will find the costumes and hair style of them were composed with rich characters in the Han nationality, which shows the frequent communication between Tibet and the Han region in ancient China.

Moreover, in the main hall, there is the throne of the 7th Dalai and near 100 pieces of precious paintings. Many great Buddha statues as well as the legendary stories of the king Srongtsen Gampo of Tibetan region in ancient China, etc. on the 2nd floor are also very worth to see.

Takten Migyur Podrang (达旦明久颇章) behind the zoo of Norbulingka is the palace of the 14th Dalai, which means invariability and everlast, and it is also called the New Palace. After entering the courtyard of this Podrang, you will seem being in a sea of flower with gorgeous blossoms here and there. In front of this palace, you can appreciate the traditional beauty of Tibetan featured building, with the golden deer, dharma-cakra, golden tiles, streamers, holy beasts, and so on, which definitely express the thoughts and doctrines of Buddhism.

Entering the palace, you can see the old rest rooms of the 14th Dalai, where is decorated in very modern, splendid and elegant style with sofa, radio, shower fitting, tub, etc. of high standards. And this kind of bedroom could be regarded as fancy at that period. Come out from the bedroom, and you can admire the throne of Dalai Lama in the center of the Preaching Hall.

Besides, there are a series of exquisite wall paintings, so you can feel the rich culture of Tibet and Buddhism. From the origin of Tibetan, the first Tibetan king, the peace-marriage story of Wen Cheng princess, to Chairman Mao celebrating the Tibetan New Year with the 14th Dalai, etc. All the 301 paintings will tell you the historical process of Tibet. Furthermore, you will be amazed at the fantastic painting of the famous Tibetan painter who composed this work combining the traditional feature with techniques of western style paintings, making a new era of Tibetan paintings.

Tyokyil Portrang (措吉颇章) at an artificial lakeside, facing the Takten Migyur Palace, is the most beautiful place in Norbulingka, where you can admire the nice view of Suzhou garden with ancient trees towering the sky, fragrant floras everywhere, palaces, pavilion, pool, lake, etc. all in Han minority architectural styles. This Podrang with the typical Han artistic concept of water flowing beneath a small bridge is very close to the Summer Palace in Beijing, and that demonstrates the Han culture has been spread into Tibet and was very popular among Tibetan people at that time.

Chensal Podrang (金色颇章) in the west part of Norbulingka is one of the main three palaces in this park and was built in 1926. It is also called Chensal Lingka. In the 6800 square meters wide area, many giant trees, roses, peonies, and so on are interspersed perfectly, which forms a rattling scenery. The Chensal Podrang is very sumptuous, and makes up a plateau garden landscape painting with its yellow eaves, golden decorations, and white walls. Inside the Podrang, you can see the Main Assembly Hall where is for the 13th Dalai meeting officers and social people.

Norbulingka is especially rich in historical relics, so you can enjoy the local made religious cultural relics and the treasures awarded by the central government and emperors in the past dynasties.

During the first construction period of Norbulingka, the 7th Dalai Lama built a "statue making field" to create all types of Buddha statues and wears to decorate the garden. Therefore, you can see many precious relics from the 17th to 18th century. Like the thousand-hand Bodhisattva that has very long history and exquisite skill among all the same types; 8 dagobas in Norbulingka worshipping the sariras of Buddha skull and body that are super holy and rare.

Also, you can appreciate a lot of thangka from the 18th to 20th century. A work from the 13th century describing the story of Attisha impacting Buddhist doctrines to his disciple is very vivid and extremely precious in the world. You can enjoy multiple excellent wall paintings in Norbulingka, especially in the New Palace. You will not only know more about the historical development of Tibet, but also understand the start of different sects of Buddhism during 846 AD and 1391 AD.

Every July 1st to July 7th in Tibetan calendar, about from the late August to the middle of September ( August 21st to 27th in 2017) in the Gregorian calendar, is the Shoton Festival of Tibetan people. Since the ordinary people would prepare yogurt for the monks during that time, it is also called Yogurt Festival. During that week, a lot of people will gather in Norbulingka to celebrate this gala. And it is very important and enjoyable to watch the Tibetan Opera performed by famous Tibetan teams from many places. You can see the colorful costumes on Lhasa people, watch the special Tibetan opera, dance and enjoy local food with Lhasa people till the late afternoon.

Tibet Museum at the southeast corner of Norbulingka is a great place to visit. People can enjoy the abundant historic relics from prehistoric era to the modern times, from Buddha statues and Bodhisattva statues in various materials and forms, to hand writing Tibetan classic books, thangkas, musical instruments, artifacts, porcelains, etc. It is definitely a good place to know more about Tibetan culture. (Open approximately from 9:00 to 17:00)

Note: the Tibet Museum has been closed for expansion since December, 2016, which may last for 3-5 years. And if you want to visit museums, the Tibet Museum of Natural Science of about 22 min driving distance is a good place to go. 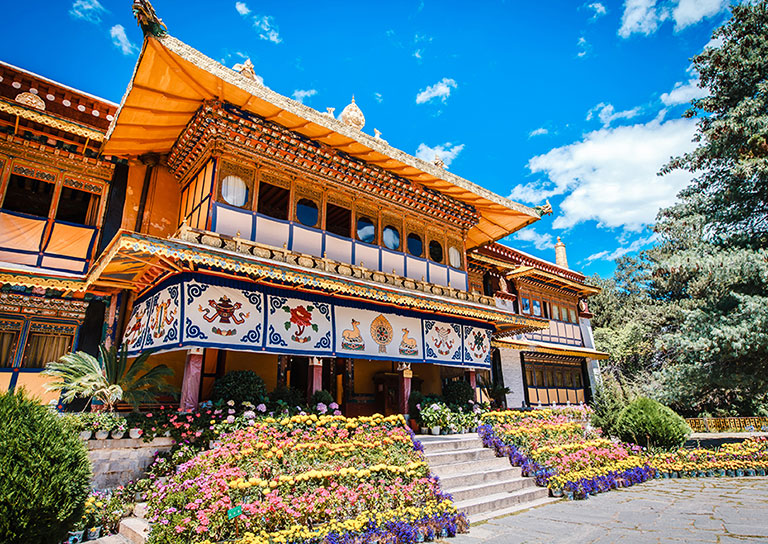 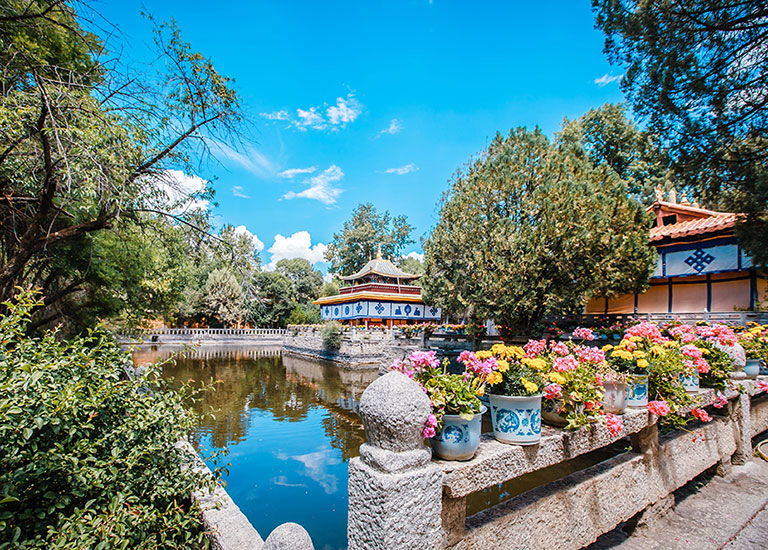 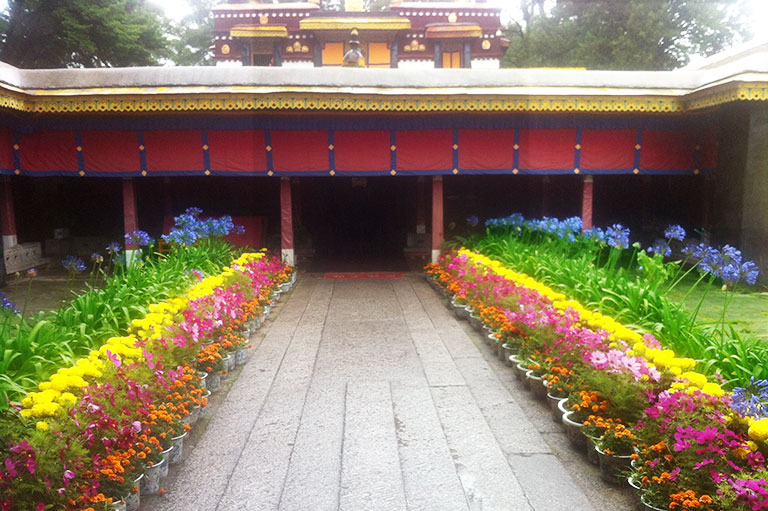 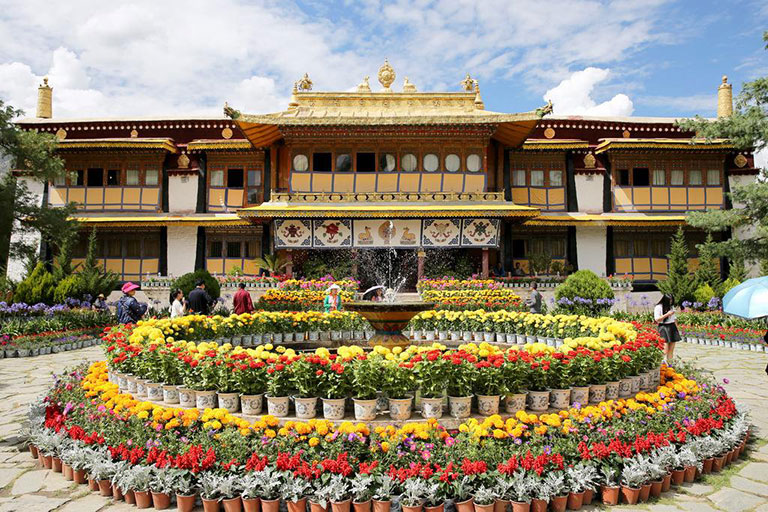 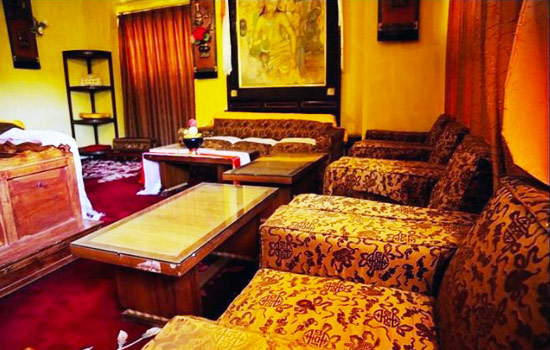 Fancy Decoration in the Room of the 14th Dalai 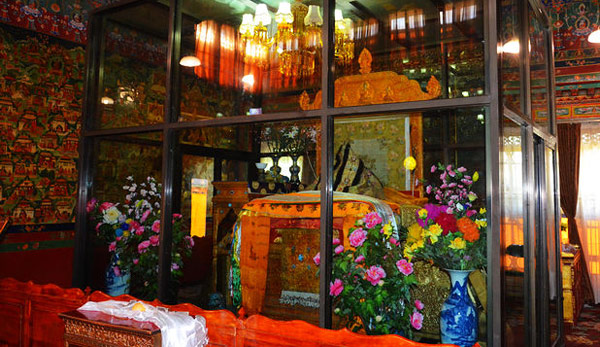 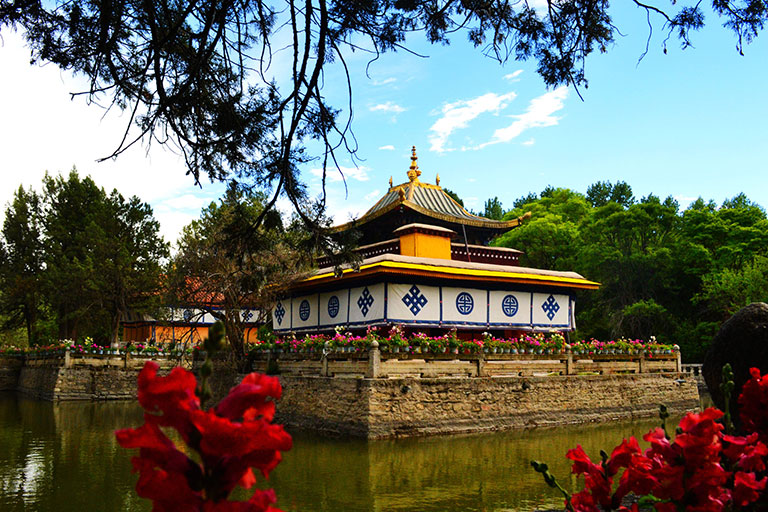 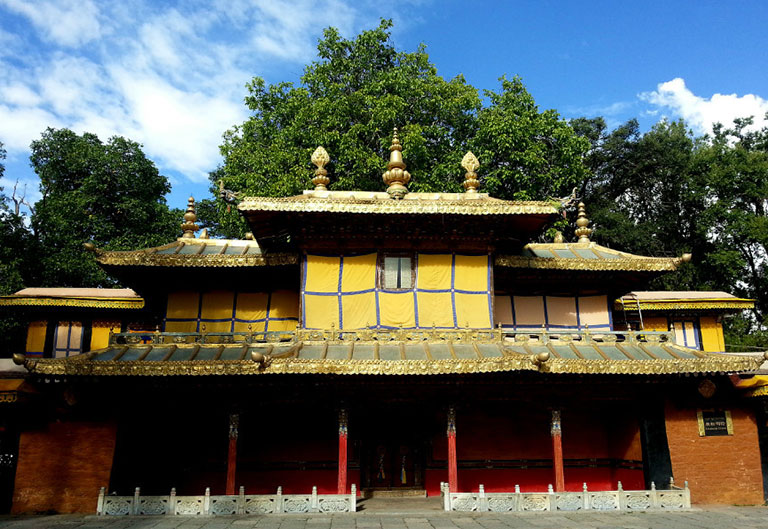 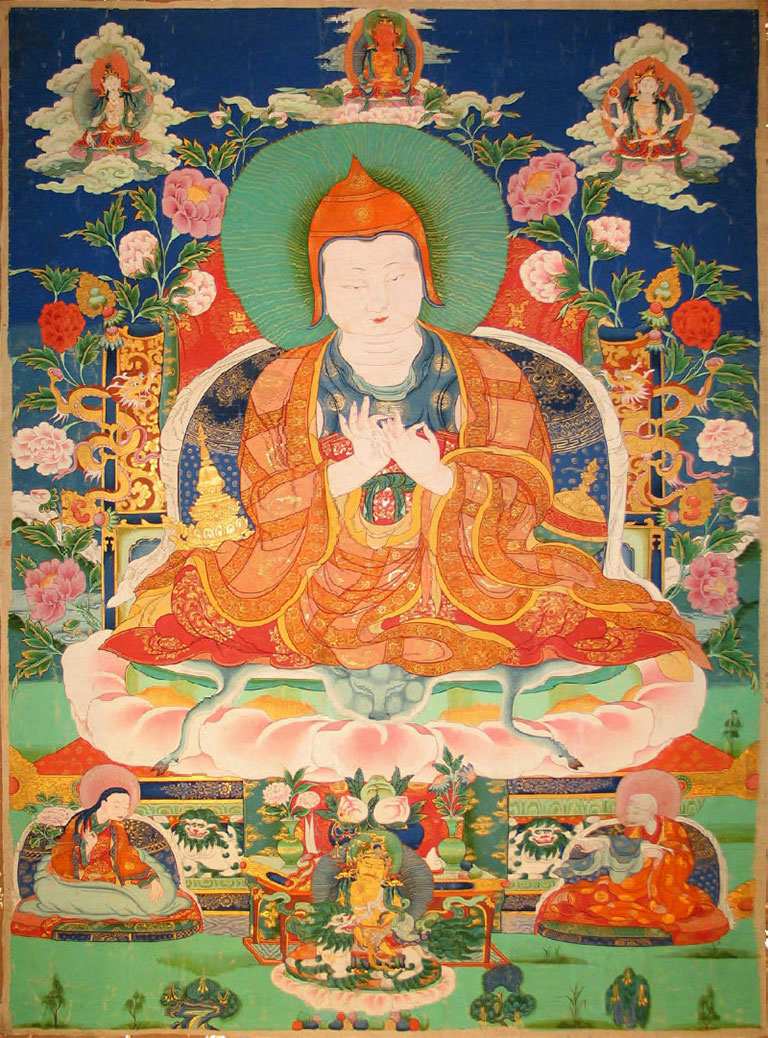 Thangka Painting from the 13th Centuray 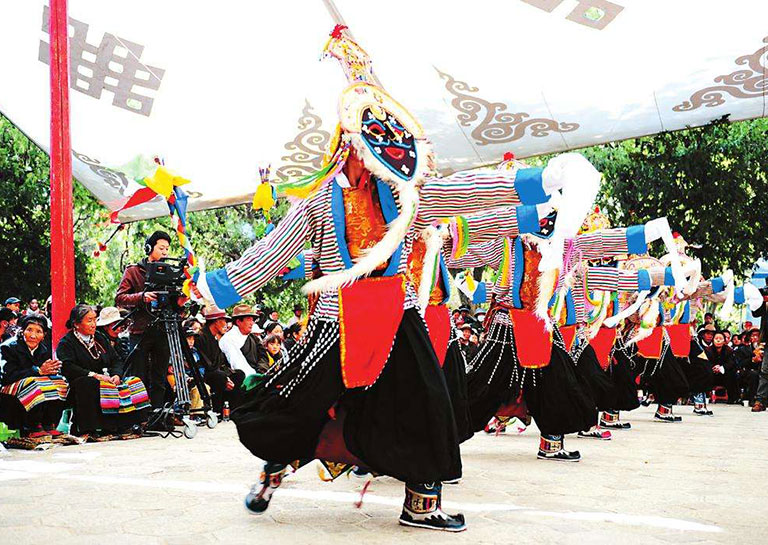 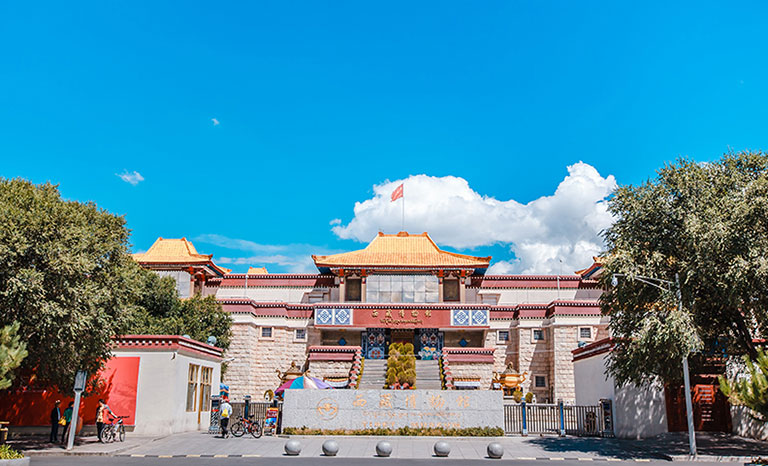 Enter the south gate of Norbulingka to visit the Kalsang Podrang that is the oldest palace here, and then go to the Tyokyil Podrang to enjoy the most beautiful view and Han style buildings. Move your step to the Takten Migyur Podrang to see the rest rooms of the 14th Dalai Lama and a series of precious wall paintings as well as historic relics. Then, enjoy the fancy garden view along the way to the Chensal Podrang and appreciate the typical Tibetan palace with vigorous floras and the meeting place of the 13th Dalai. After that, see the multiple species of animals in the world’s highest zoo. (For 2-3 hours)

Location & How to Go to Norbulingka

Located at downtown Lhasa, it takes only 10 minutes to drive to Norbulingka from the city center. Also, you can get there by different vehicles like buses, taxis, tricycles, bikes, etc.

If you want to get rid of hustle of public transportation and troublesome navigation, you can book a private tour package which covers sightseeing, dining and transfer from us. Our local tour guide and driver will escort you to Norbulingka with speed and convenience, and take care of all the details. You just need to focus on sightseeing. 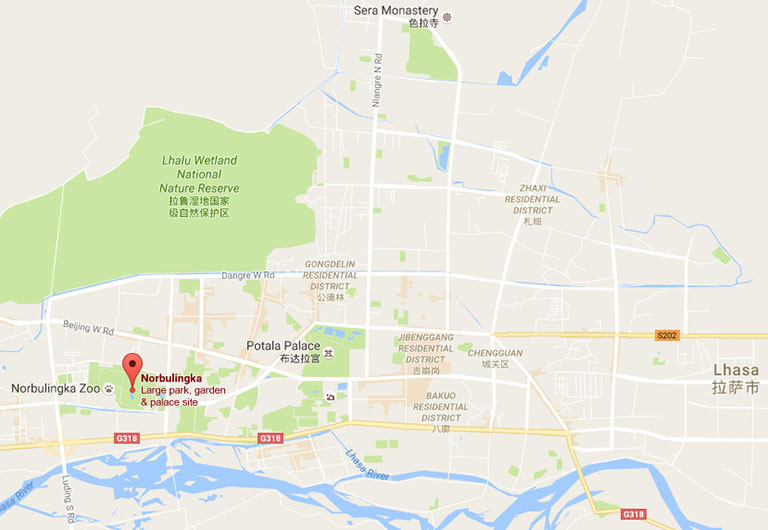 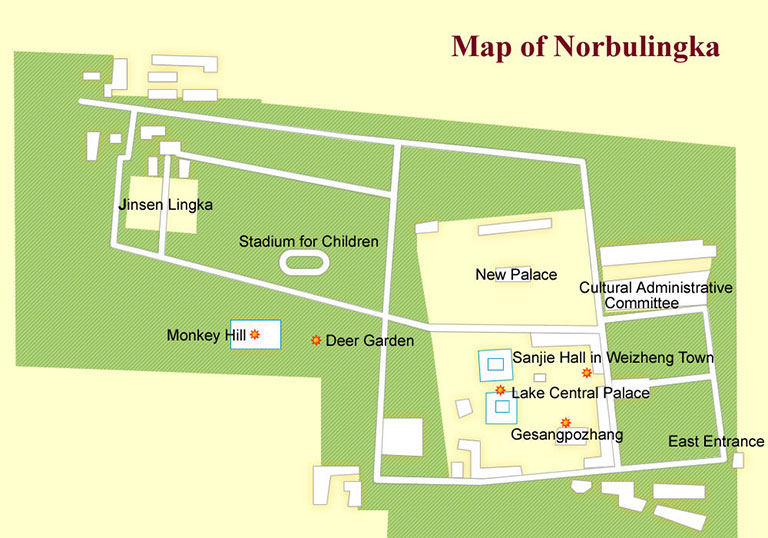 1. Blooming season of flora in Tibetan area is respectively short, and summer is the best season to see the flower view in Lhasa.

2. Avoid doing vigorous activities in case of altitude stress for the Norbulingka is 3650 m above the sea;

3. Wear Suitable to protect from the strong sunlight, but do not wear hat when visiting inside the Tibetan monasteries, and ladies do not wear skirts visiting here;

4. Follow the Buddhist manners – talk in low voice, always be respectful of others, reflect on the Buddha’s teachings, remain quiet when visiting temples…