You are here: Home » China Tours » Tibet Tours » Things to Do in Tibet

Things to Do in Tibet

Never worry about finding no things to do in Tibet! Tibet has dozens to offer. At the same time, they are not only fabulous but also unique that you are not able to see in other parts of the world except in Tibet. Buddhist monastery is the first feature of among all things to do in Tibet. You may see a monastery every city and town you reach. The monasteries load the essence of Tibetan culture – Tibet Buddhism, and also a spectacular architectural style – sumptuous and imposing. The second feature is the high snow mountains. Tibet has a lot of high peak, including the highest in the world – Mount Everest, and the holiest mountain Kailash. The third feature is the pure holy lakes. Most Tibetan lakes are situated above 4,000m, and surrounded by high snow mountains. The most famous lakes are Namtso, Yamdrok and Manasarovar. 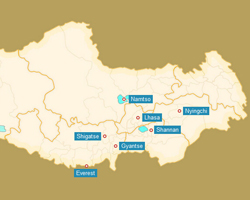 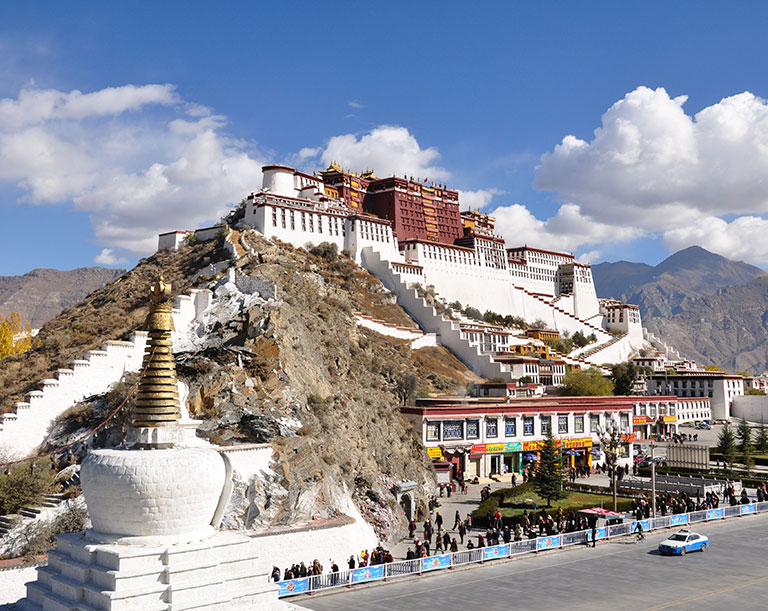 As the no.1 must-see attraction in Tibet, the Potala Palace is the center of Tibetan culture, history and religion. It is the palace of Dalai Lama. The Potala Palace is a great representation of traditional Tibet architecture. At the same time, it is a museum of arts which keeps more than 70,000 arts and more than 60,000 Buddhist scriptures. Besides, the 698 mural arts is a spectacular view in the palace. Furthermore, there are also lots of exquisitely-made tangka hanging on the walls. 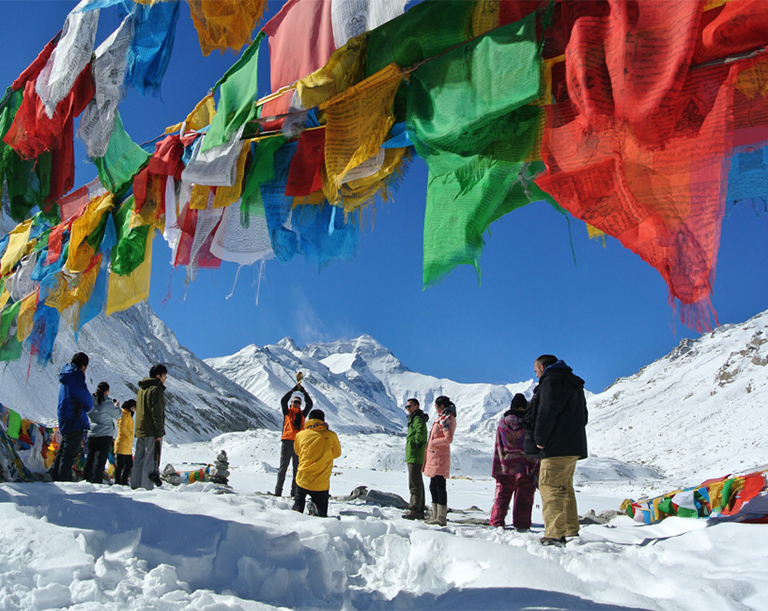 Mount Everest is the highest mountain in the world with an elevation of 8844.43 meters. Thousands of people make their expedition from far away to explore the splendid looks of “The Third Pole”. Mount Everest is located on the border of China and Nepal. The southern side is located in Nepal, very steep and difficult for regular tourists to visit. While, the northern side is located in Tibet, and goes up gradually to the Everest Base Camp locating at the altitude of 5,200m. The infrastructure in the northern Mount Everest is much better than the southern side. Travelers can take vehicle to the Everest Base Camp to get bigger views of Mount Everest. Besides, travelers are able to use electric power at EBC. 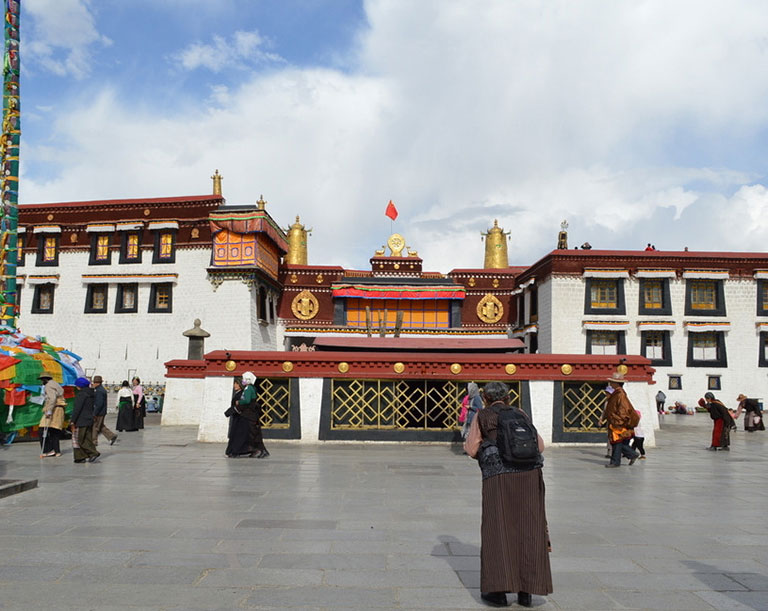 Jokhang temple is a place where you can feel the strong belief of Buddhism of Tibetan. There are thousands of Tibetan coming here for pilgrimage everyday. Jokhkang, in Tibetan, means “the House of the Buddha”. In the morning,from 08:00 to 11:30, it's open to religious people. From 11:30 to 17:30, it's open to tourists. In the afternoon, you can see the Buddhism debating on the balcony of 2nd floor. 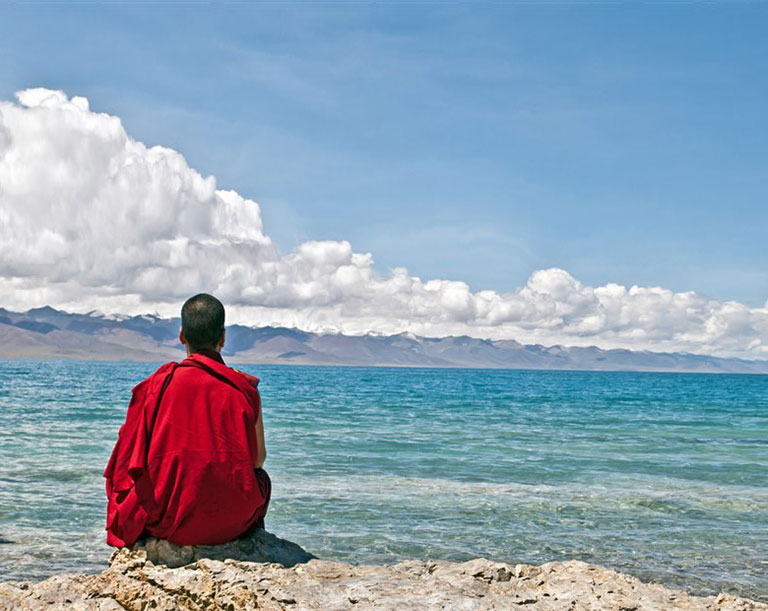 Namtso Lake is one of the most beautiful nature views in Tibet. It looks like a slice of mirror which reflects the pure snow mountains and blue sky and forms breathtaking inverted images in the water. Ranked as one of two holy lakes in Tibet, Namtso lake is also a popular place for pilgrimage and meditation. The great pilgrimage, Namtso Outer Kora takes place in April every 12 years according to the Tibetan Lunar Calendar. 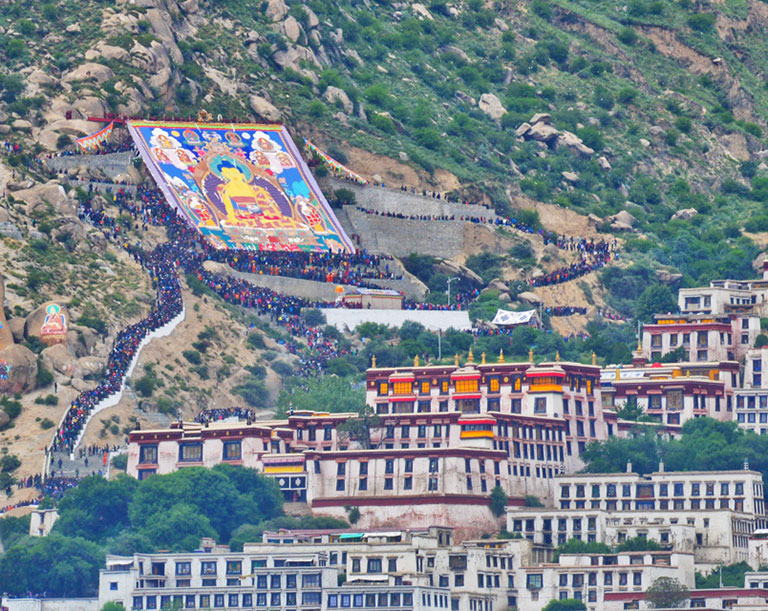 Drepung Monastery used to be the largest monastery of Tibetan Buddhism. On its heyday, it had more than 10 thousands of monks. It was built in the year of 1416 by the disciple of the famous Tsongkhapa Master- Jamyang Chojey. It collected plenty of historical and cultural relics and Buddhism sculptures. Drepung Monastery is especially known as the site of the annual Shoton Festival. From the monastery, you can enjoy an amazing mountain view. 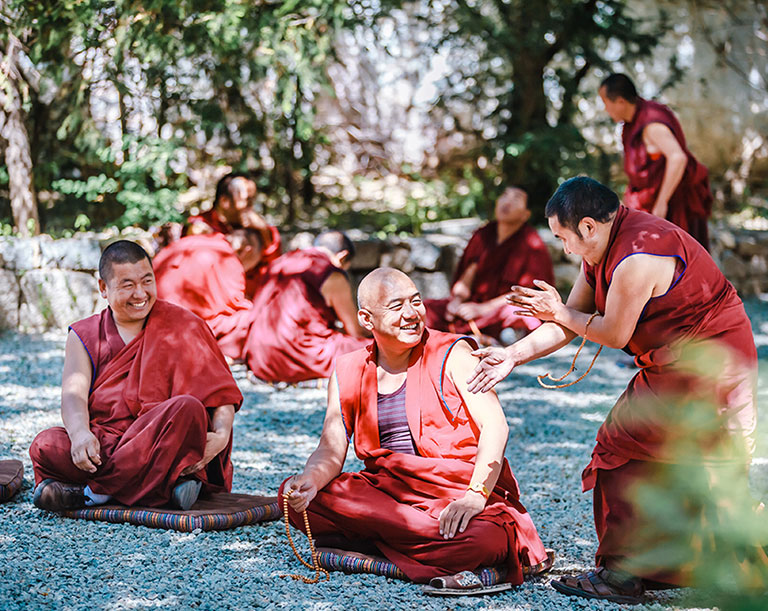 Sera Monastery, with the Ganden, Drepung Monastery, is renowned as “three great monastery” in Lhasa. It was built in the year of 1419. From the past to nowadays, Sera Monastery has been famous for its featured “Buddhism debating”. Hundreds of monks study and live here. They come to the courtyard of monastery and start to debate about Buddhism and philosophy with each other everyday. 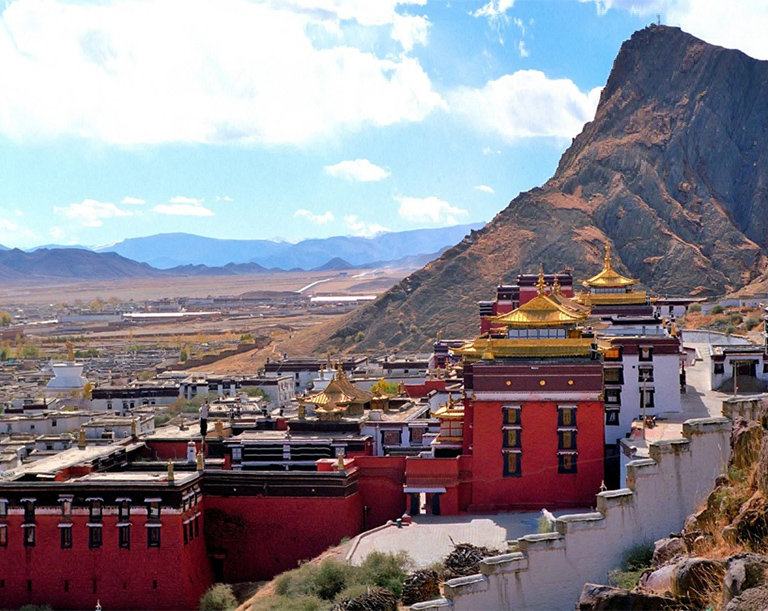 Tashilhunpo Monastery is one of the biggest monasteries in Tibet covering more than 300,000 square meters. It, together with Sera, Ganden and Drepung Monastery in Lhasa, Ta ’ er Lamasery in Qinghai and Labrang Lamasery in southern Gansu, is famous as “Six Great Monasteries of Gelug”. It was built in 1447 of Ming Dynasty by the disciple of Buddhism master Tsongkhapa, then became the Buddhism center of Tsang region. It has been the traditional seat of successive Panchen Lamas who is one of two most powerful leaders of Buddhists. 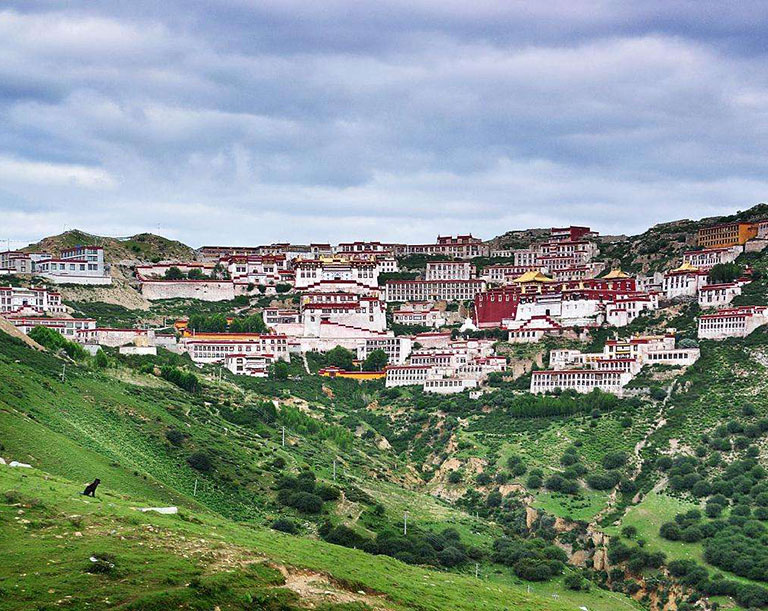 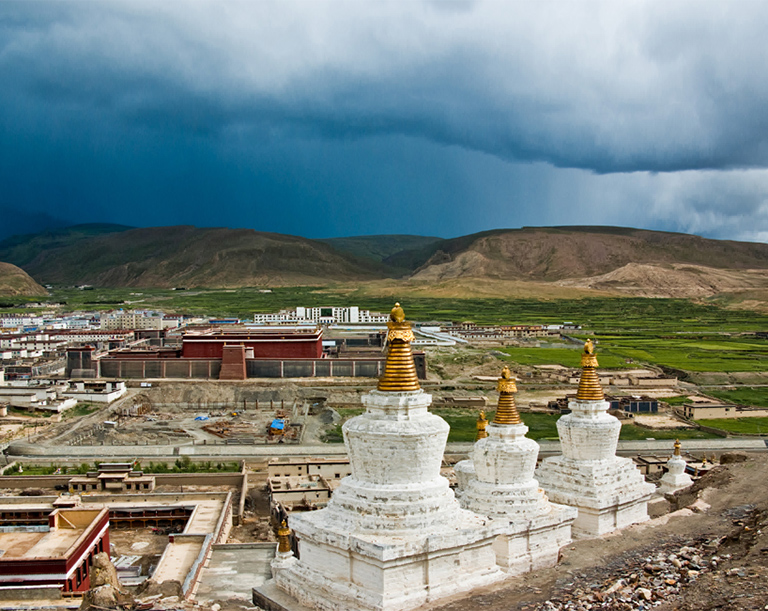 Sakya Monastery is located on the southern side of Zhongqu River in Sakya County, Shigatse Prefecture. It is the ancestral monastery of Sakya School of Tibetan Buddhism. Sakya, in Tibetan, means gray and while earth. So you can see many temples and walls painted in gray and white.

Sakya Monastery is known as the “Second Dunhuang” because of its rich collection of arts, historical relics, including more than 24,000 Buddhism books, 3,000 Thangkas, Buddha statues, porcelains, wall paintings, etc. 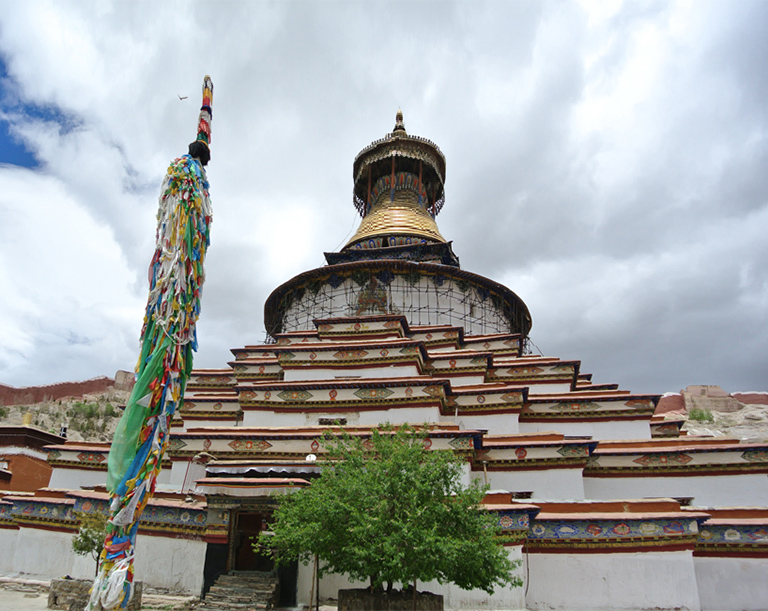 Palcho Monastery was built in 1427 in a small col on the Gyantse Plain facing the Gyantse city under foot. It is a traditional Tibetan monastery which is a fusion of Han, Tibetan and Nepali architecture, and has both temples and stupa. Palcho Monastery’s symbol is its Kumbum Stupa which is famous for having 100,000 figures of Buddha in the chapels, niches and wall paintings of Kumbum.

Another feature of Palcho Monastery is the harmonious relationship between three schools of Tibetan Buddhism. The monastery was first owned by Sakya School, and then permeated by Kadampa and Gelug School. The three schools always combated for their legitimacy. But they later agreed to accept and respect each other. 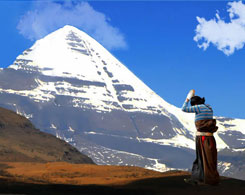 With an altitude of 6,656 meters, Mount Kailash or Kailash Mountain is one of the most breathtaking mountains in China and one of the holiest spots in the world. Being the holy land of four influential religions, Mount Kailash is honored as the Sukhavati (meaning Western Pure Land of Ultimate Bliss) and the Holy Center of the World. Every year, thousands of followers of different religions come to Mount Kailash to make a pilgrimage from different corners of the world.

Top 3 Tibet tours chosen by most customers to explore Tibet in the best way. Check the detailed itinerary, or tailor your own trip now with us. 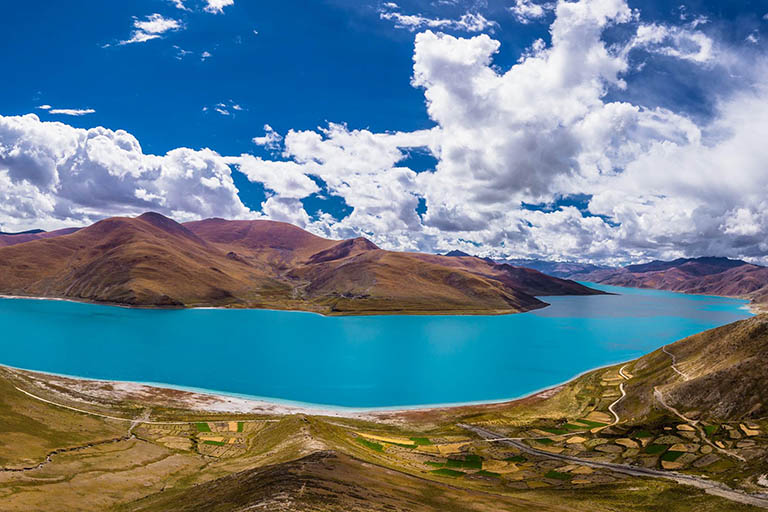