Langzhong Ancient City (Langzhong Ancient Town), located in northeastern Sichuan basin, about 260km away from Chengdu, was once called “Baoning” and is a key military position in the past 2,300 years or more. According to the history, Langzhong is an important segment of the culture of the “Three Kingdom”, because the senior general Zhang Fei, the sworn brother of the King Liu Bei of Shu Kingdom, has garrisoned Langzhong for seven years and was buried here after death. Also, Langzhong has been the cultural, political, economic and military center of Northern Sichuan during many dynasties and governed as the provincial capital of Sichuan for tens of years in Ming and Qing dynasties.

The precious well-preserved Langzhong Ancient City was designed with the theory of the “unity of heaven and man” and is one of the "Four Ancient Cities in China" as well as the "National AAAAA Scenic Spot". Since Langzhong Ancient City keeps the primitive features and enjoys multiple places of interests, like Zhang Fei Temple, Sichuan Examination House and so on, it is one of the best places to experience the culture and history of Sichuan province and China. With mountains and water embracing, this historic city of 4.59 square kilometers wide has gained the reputation of “Langzhong Fairland” and the “Rare Treasure under Heaven”.

With a long history of more than 2,300 years, Langzhong Ancient City feasts tourist eyes with more than a thousand of elegant traditional wooden count-yard architectures and ancient-like lifestyle in an unhurried pace. It does not require much imagination to envision what Langzhong Ancient City would have been like in ancient times, because this fantastic town has well-kept its original looks.

Here, there are numerous ancient houses, streets, city walls and towers waiting for your steeps! 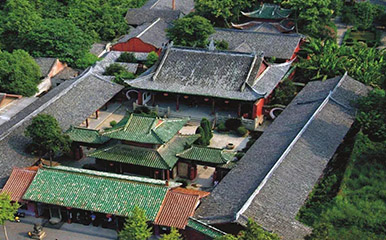 Also called Zhang Fei Temple, This memorial place was built over 1,700 years ago and is on the western streets of Langzhong Ancient City. Since the respected general Zhang Fei in the “Three Kingdoms” period was buried here after death, this place is the best place to experience the culture of that period. 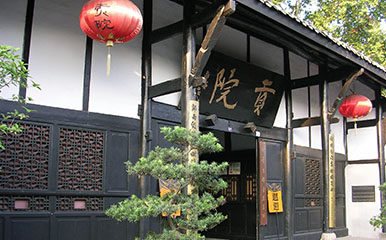 Examination House in Langzhong is the most complete one compared the other two in China. With documents and quadrangle courtyard, the Examination House presents the scene of the imperial test for selecting officials in Qing dynasty and shows the history of this testing system for hundreds of years. 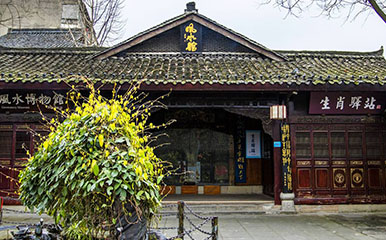 Situated on the Dadong Street of Langzhong Ancient City, the Museum of Geomancy is built in 2004 and divided into 5 parts. Choosing YI-angury as the major point this museum explains the mysterious geomancy in China and is the only one tourist spot themed with architectural geomantic omens. 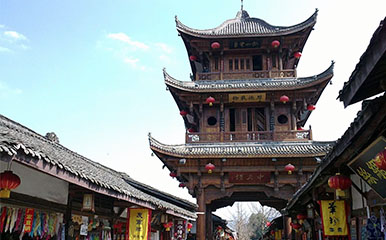 Zhongtian Tower is the geomantic coordinate of Langzhong Ancient City and was first built in Tang dynasty with 3 floors in 25 meters high. Standing on this grand and exquisitely constructed building, you can enjoy the spectacular view and amazing arrangement of the whole ancient city with 99 streets.

Stroll the ancient streets between the traditional houses and along the river must be on the top of your activity list at Langzhong Ancient City. Local snacks here, especially the Zhangfei Beef, are also the “must-experience” part for every tourist coming to Langzhong. Besides, you should never miss the Lantern Drama and interesting Shadow Puppetry!

Also called the Farmer Drama, this local art has long been popular in northern Sichuan since 1,200 years ago. With red lanterns hanging high and drums beat boisterously, the folk artists perform this show in diverse forms of comedy during festivals to show the local characteristic of the country. 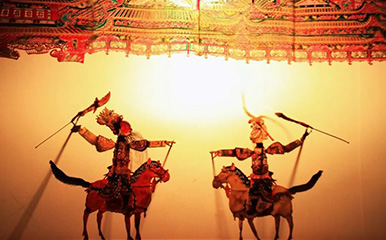 This artistic activity is a symbol of Sichuan. After the mix of Cangxi Lantern Drama and the shadow puppetry originated about 2,000 years ago in Shaanxi area, the Northern Sichuan Shadow Puppetry formed its features of fine carving, exquisite performance, graceful singing, and funny play. 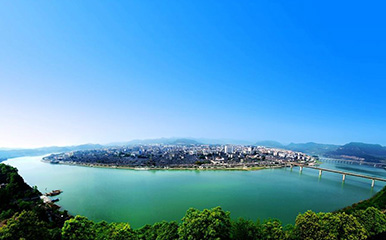 Panorama of the Town

If you are looking for a panorama view of Langzhong Ancient City, you can travel across the Jialing River to Jinping Hill (锦屏山) opposite the ancient town. From there, you will get the best view of the river, the ancient town and also the modern Langzhong City.

There are many well-known snacks in Langzhong. Baoning Vinegar invented about 1100 years ago is the essence of Sichuan Cuisine. Zhangfei Beef famous since Qing dynasty has gained food reputation. Moreover, Baoning Suppressive Wine and Sugar Steamed Bread, etc. are also worth to try. 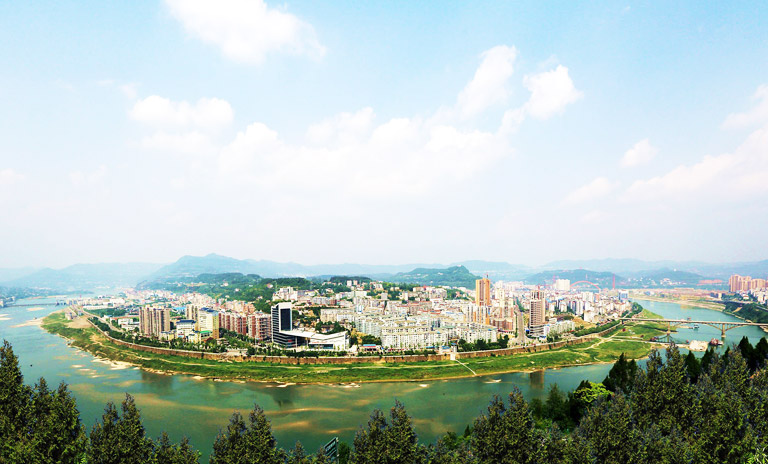 Langzhong Ancient City belongs to the subtropical humid monsoon climate area. Having a moderate climate, its annually average temperature is 17℃, with the highest of 39℃ and the lowest of 4.6℃ below zero.

Langzhong Ancient City Transportation & How to Get /around There

Langzhong Ancient City is situated in the remote area on northeast part of Sichuan Province, about 265km and 4 hours away from Chengdu by car. At present, there is no airport settled in Langzhong. Tourists usually get there from Chengdu by high speed train, private car or long-distance coach. 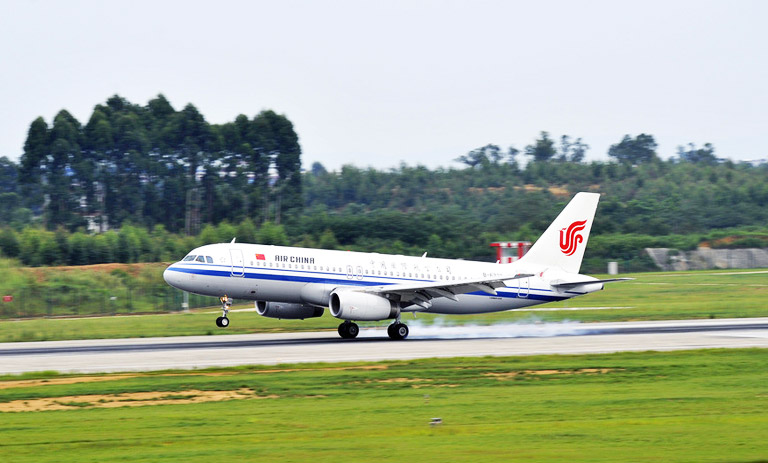 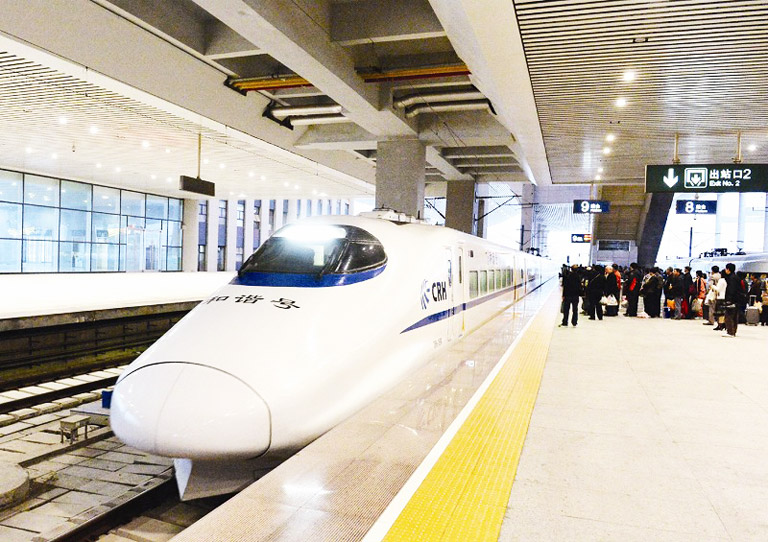 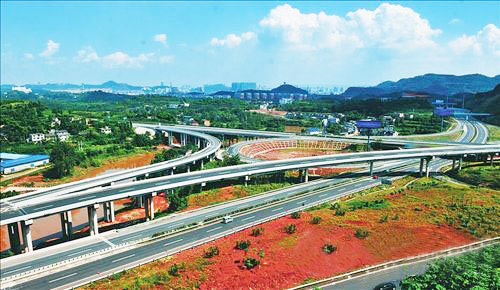 Get to Langzhong Ancient Town

Langzhong city has not yet finished the construction of the first airport till now. The nearest one is the Nanchong Gaoping Airport in Nanchong City, around 110 km from Langzhong. This airport has opened 10 airlines to and from the major domestic cities, namely Beijing (every day), Shanghai, Shenzhen (every day), Guangzhou (every day), Sanya, Xi'an, Lhasa, Hangzhou, and Kunming.

Get around Langzhong Ancient Town

Hiking by foot is the best way to travel around Langzhong Ancient Town. There are also optional sightseeing buses to take you get around the town. 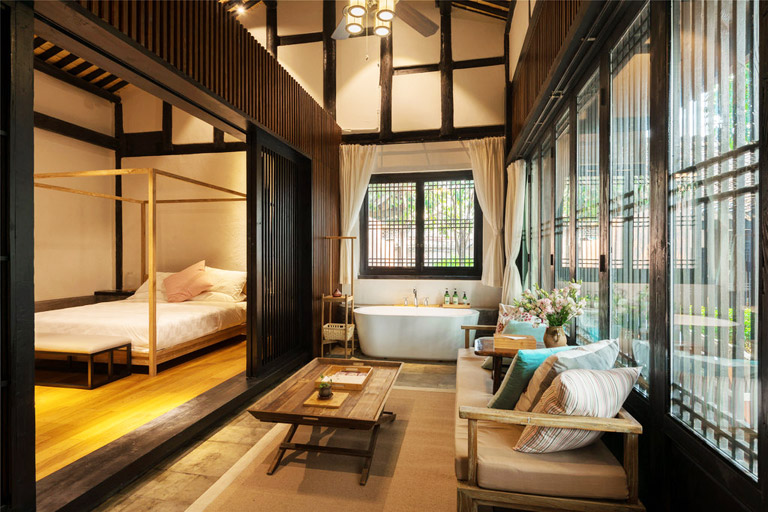 Usually, tourists will stay at least one night at Langzhong Ancient City to have an in-depth explore of this charming ancient capital.

Langzhong Ancient has a lot of hotels of different standard for you to relax. The typical luxurious Blossom Hill Failand Sichuan of local feature and Jinyuan zhangfei International Hotel both in the ancient city are good choices for high quality service. The Yuntian Xibainian Hotel in the downtown of Langzhong city is also very good. Besides, there are many ancient style courtyard places like Lees Courtyard Langzhong where you can experience the old living room. Multiple comfort hotels can be found here, like the Wealth Hotel near the bus station and the Langzhong Panda Le Grand Large Hotel near the railway station.

Here we list some very useful maps about Langzhong Ancient City for your reference. You can feel free to use them when you want to know the attractions, location. 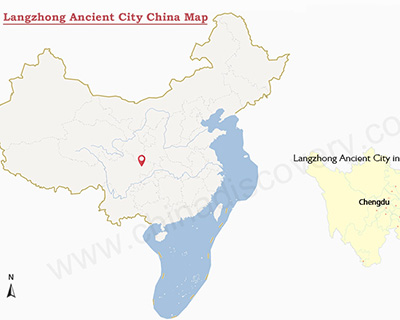 Location Map of Langzhong in China 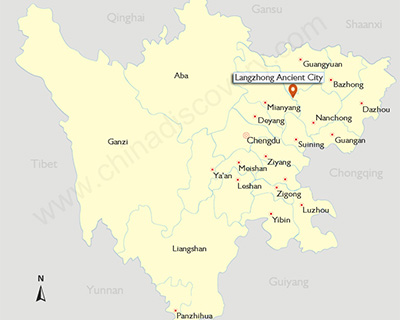 Location Map of Langzhong in Sichuan 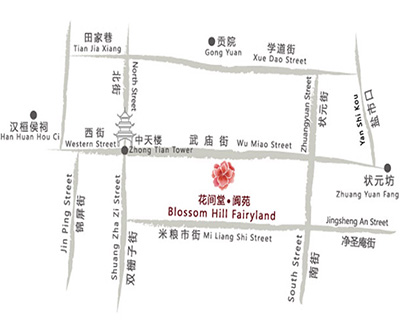 Sichuan is wonderful province full of amazing natural sites, cultural heritages and also adorable pandas! Chengdu, the capital of Sichuan Province, is usually the first stop of touring Sichuan. Having a date with cute pandas in Chengdu Panda Base is the best way to make a start. Beyond the pandas, trying a taste of slow-paced lifestyle in this city is also a happy experience. Besides Chengdu, Sichuan also provides fairy-like Jiuzhai National Park, Grand Leshan Giant Buddha, magnificent Dujiangyan Irrigation System, etc. to explore! Discover now!

Other Destinations in Western Sichuan

With sublime snow-capped mountains, sacred Tibetan monasteries, and spectacular valleys to be visited, Western Sichuan offers remarkable surprises similar to the Tibet. However, a tour to Western Sichuan is much easier for foreigners when compared with Tibet, because it allows tourists to get rid of filling paperwork for entering.

Besides Daofu, there are 15+ amazing tourist destinations in the Western Sichuan region well worth your visit. And here, we would recommend you the top 4 places hot chosen by our customers, including Daocheng Yading, Mount Siguniang, Danba and Kangding. 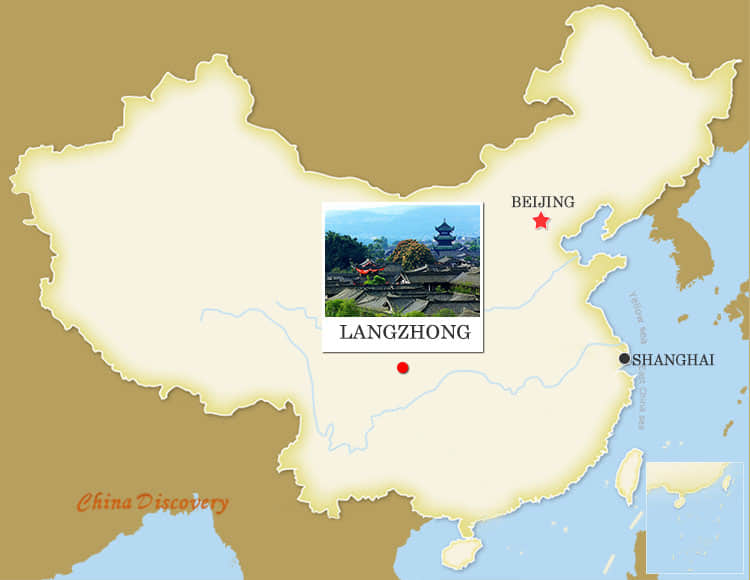 How to Plan a Langzhong Ancient City Tour

Langzhong is such a great town that offers plenty of things to do and see to keep visitors busy for 1~2 days. Normally, tourists get to Langzhong from Chengdu in the morning and go back to Chengdu in the afternoon of next day, with one night stay at Langzhong Ancient Town to conveniently soak up the ancient atmosphere in both day and night. Besides the most famous Temple of Marquis Huan and Examination House, you can also go to Museum of Geomancy and Zhongtian Tower, etc. and enjoy the traditional local folk activities to know more about the life of Langzhong Ancient City.

Some “Three Kingdoms Fans” also prefer to travel Guangyuan for 1~2 days first before their Langzhong tour, which was also cultural corridor of “Three Kingdoms”. Besides, Guangyuan was the birthplace of Wu Zetian, the only female empress in Chinese history!

Almost all the Langzhong visitors will spend 1~2 days in Chengdu before or after their Langzhong tour. And then, they will get more stories of “Three Kingdoms” and have an in-depth feel of Sichuan’s ancient capital and nowadays capital! Besides, the adorable pandas in Chengdu downtown also await their greeting!

Want to add more surprises into your Langzhong tour? Please feel free to contact our professional travel consultants to customize your own itineraries which would perfectly suit your likes and requirements. 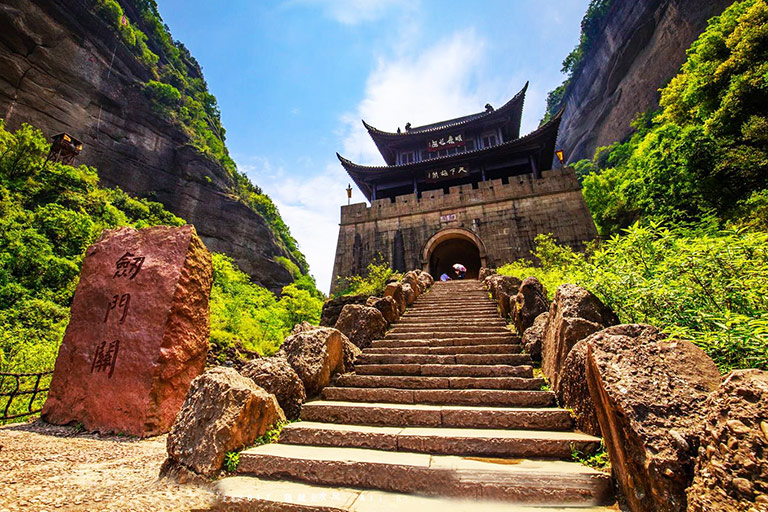 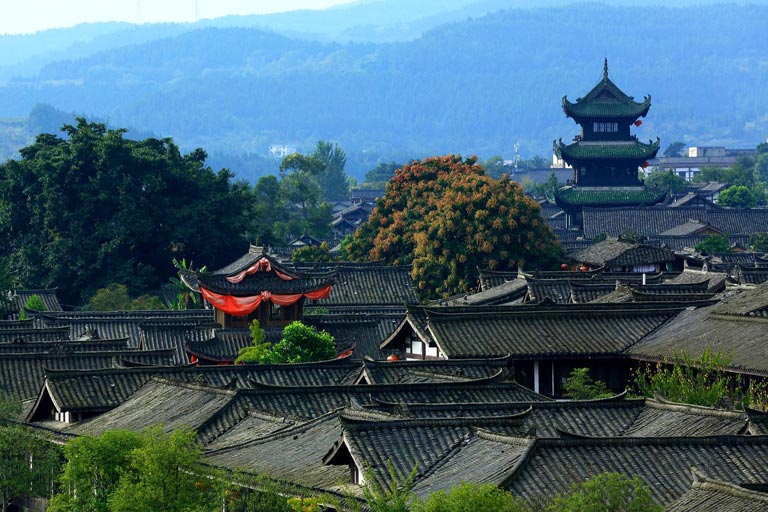