You are here: Home » Shandong Tours » Mount Tai Tours  » Things to Do in Mount Tai

Things to Do in Mount Tai

Listed into world natural & cultural heritage site in 1987, Mount Tai (Taishan) is the Foremost of Five Sacred Mountains, while actually it’s not the highest one within altitude of only 1545 meters. The reason why people named it as "First Mountain under Heaven" is because of traditional religion dating back to ancient emperors, like Qinshihuang-the first emperor in China, Wu zetian-the only female emperor, Qian Long emperor in Qing dynasty, etc. It was regard as the symbol of power.

Nowadays, things to do in Taishan can be vary and different. Visitors climb Mount Taishan would rather to appreciate stunning views of sunrise, clouds and witness ancient scenic spots, like South Heavenly Gate, the Heavenly Street and Jade Emperor Peak, and more Taishan Attractions awaiting you for visit. 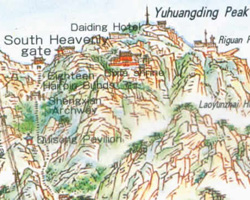 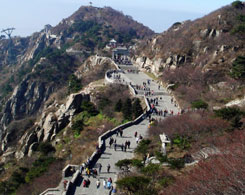 Mount Tai, the foremost of the Five Great Mountains of China, is a mountain of historical and cultural significance. It is well known for its majesty in vigor, grandness in structure, soaring in shy and rooting in terra, broad foundation. It is also a focal point for religion in this area, providing a base for Buddhism and Taoism. The tallest peak is the Jade Emperor Peak at 1,545 meters. For climbing, you can started from the back or north side. There are also round-trip cable cars from the front for travelers to reach the top (Note: The last cable car descends at 4.30 p.m.). 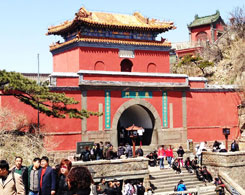 As the end of Eighteen Twistings, the South Heavenly Gate also named Heavenly Gate Pass is the terminal of cable-car and the only road passing through the Taishan Summit. With area of 1.6 square kilometers, it was built by Zhang Zhichun, an abbot in 1264. Standing in the1460 meters above sea level, the gate is an attic-styled architecture with stone arched doorway. Decorated by red walls and yellow glazed tiles on the roof, this imposing building is like a marvel between the peaks. 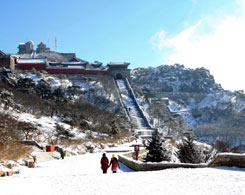 Passing by South Heavenly Gate, with several steps in the east, you come to the Heavenly Street. This whole street is about 1000 meters stretching to Bixia Temple, filled with hotels, restaurants and various shops on one side and 1500 meters cliff on the other side. Just as the name called, walking on the street is like walking in the heaven, you can embrace the clouds and overlook the whole Taishan landscape. 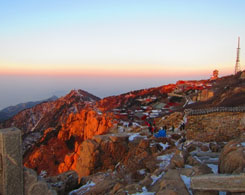 Having the altitude of 1545 meters, Jade Emperor Peak is the summit of Mount Tai, with a reputation of “the first Peak”. It named after the Jade Emperor Temple here, where was the altar for emperors to worship heaven. Besides the temple, there is a big stone engraved "The Summit of Mount Tai, 1545 meters", which is the landmark of Mt. Taishan. With such a high level it’s the great location to appreciate sunrise and clouds. 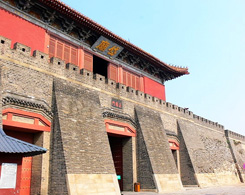 With 1.2 km away in the south of Red Gate, Dai Temple is the must-see as the largest and best-preserved ancient building complex of Mount Tai. Founded in Han Dynasty and had a larger scale of construction in Tang Dynasty, Dai Temple now contains ancient buildings of over 150, all with the imperial architectural styles.

As a Taoist temple, Dai Temple was a place where the emperors make sacrifice and worship the God of the Mt. Taishan and pray for peace and prosperity. It’s also considered as one of the Four Ancient Chinese Buildings, along with Forbidden City in Beijing, San Kong (Confucius Temple, Confucius Family’s Mansion and Confucius Cemetery) in Qufu and Chengde Summer Palace in Hebei province.