How to Get to Changchun - By Train & Flight 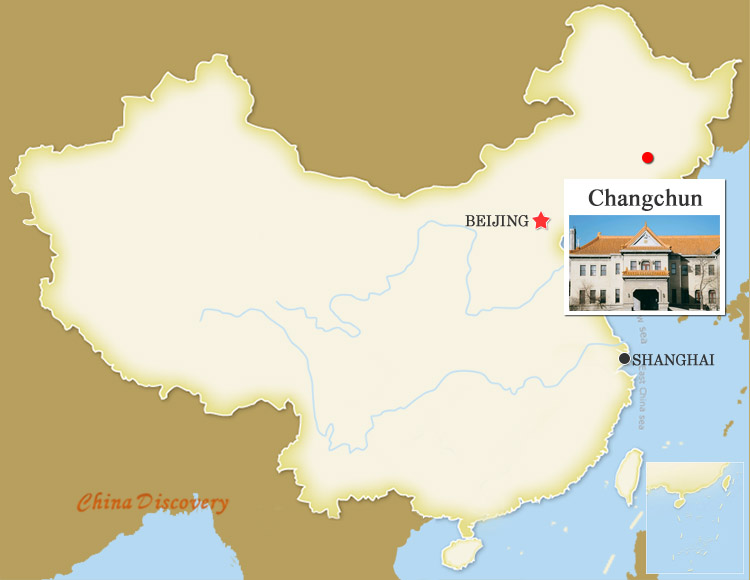 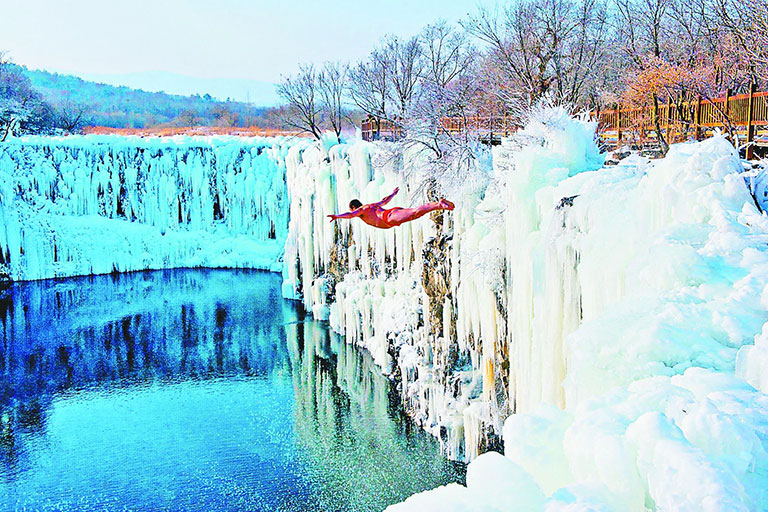 Changchun Longjia International Airport is about 62km away from Jilin City and 28km away from Changchun. Now it has operated more than 20 domestic and international routes such as Beijing, Shanghai, Guangzhou, Hong Kong, Seoul, Tokyo, etc.

Transportation: The airport shuttle bus departs accordingly with flights from Changchun urban area. As long as there is an aircraft landing, there will be civil aviation buses to pick up and send passengers to Changchun urban area. In addition, you can also get to the airport by taking the high-speed railway from Longjia Station.

At present, there are mainly 3 high-speed train stations operating in Changchun. The stations with the most passenger are Changchun Railway Station and Changchun West Station.

Changchun railway station is located in the city center area. It is the railway transfer center station of Jilin Province. This station is about 3.5 km from the Museum of the Imperial Palace of Manchukuo, 16 km from Changchun West Railway Station, and 40 km from Longjia International Airport. There are many normal trains and bullet trains to and from the province every day.

Changchun West Railway Station is about 13 km from Changchun Railway Station, 48 km from Longjia International Airport, and 20 km from the Museum of the Imperial Palace of Manchukuo. It mainly operates high-speed bullet trains to Beijing, Shanghai, Shenyang, Jinan, Dalian...

Beijing, as the capital of China, is easy to reach by international flights and offers many things to do as well. Some travelers may choose Beijing as a gateway city to Changchun. The distance between them is about 985 km (about 612 miles), and the best transfer ways are by flight and by train. 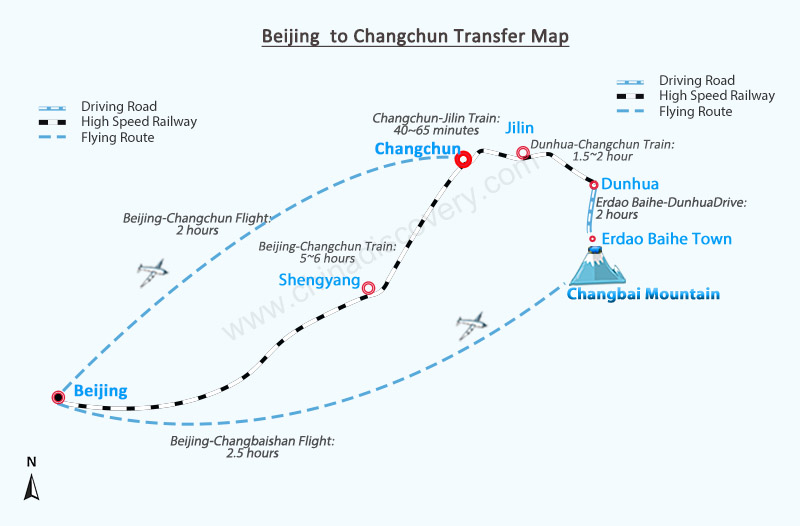 Harbin is a popular winter tourist destination known for its snow and ice festival and offers many things to do in the snow season. Some travelers may travel from Harbin to Changchun. The distance between them is about 265 km (about 165 miles), and the best transfer ways are by high-speed train. 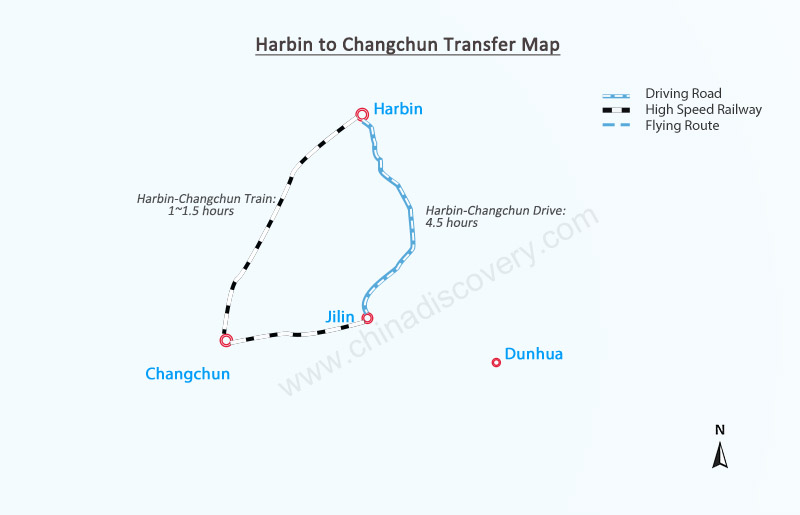 Shenyang, the capital city of Liaoning Province, is known for the Mukden Palace. The distance between Shenyang and Changchun is about 310 km (about 193 miles), and the best transfer ways are by train. 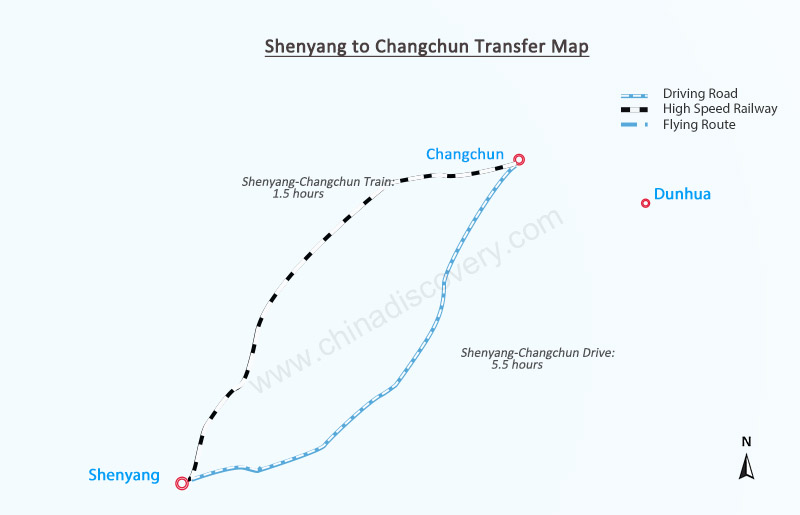 Changchun is the capital and the transportation hub of Jilin Province. For travelers who can’t travel to Jilin City directly, Changchun is a great transfer center. It is quite easy to take a flight or train to Changchun from China’s major cities. Before transferring to Jilin, you are advised to spend 2 days visiting Wusong Island and some historical places in Changchun. Besides highways, there are about 50 daily high speed running from Changchun Railway Station or Changchun West Railway Station to Jilin Railway Station, including G-trains, C-trains, and D-trains. The total trip takes only 40~70 minutes. It is also available to use a private transfer service and the driving time is about 2 hours. 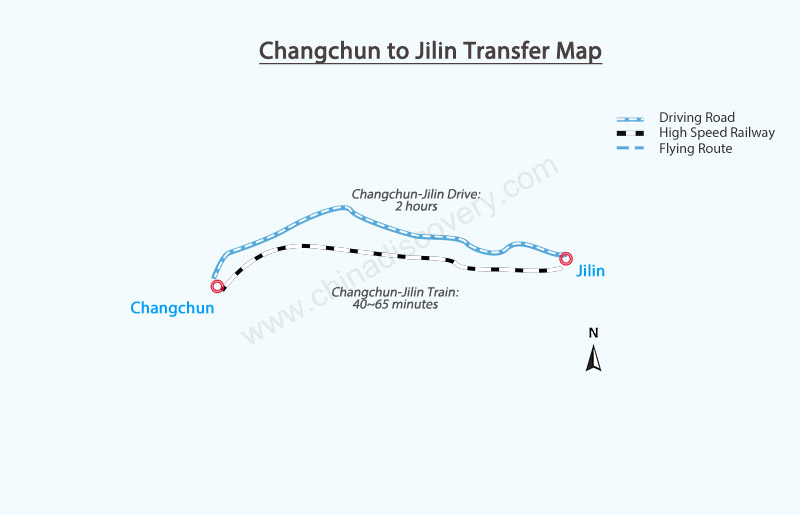 Changchun is the capital city and transfer hub of Jilin Province. For travelers in Changchun, you can travel to Changbai Mountain by flight, by train. The bus is not recommended because of the long distance. Changbaishan is a must-visit site from Changchun. Tourists mainly get to Changbaishan at West Slope or North Slope.

Changchun to Changbaishan Trains: From the early morning (around 05:30) to the night (around 18:00), there are 26 high-speed trains running from Changchun Railway Station to Dunhua Railway Station. The whole trip is 1.5 ~ 2 hours long. 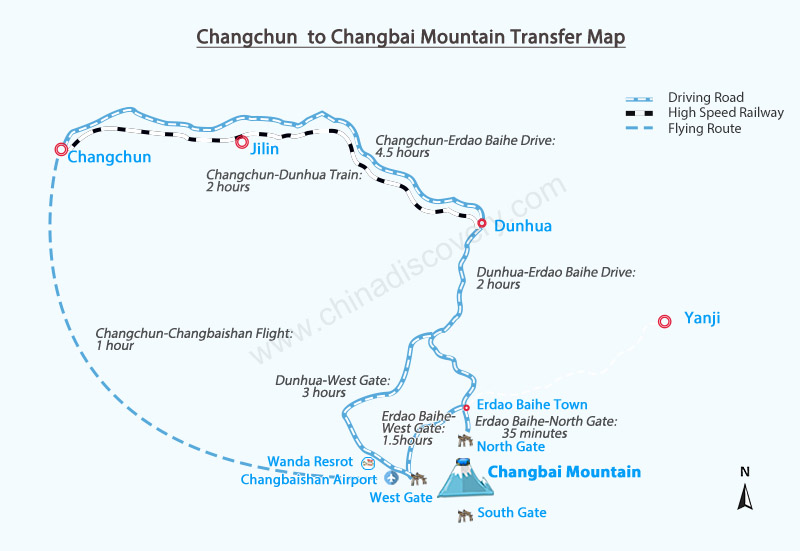 How to Get Around Changchun

By Taxi: The starting price of taxis in Changchun is 5 CNY (within 2.5 kilometers), every CNY 1 will be surcharged. If it exceeds 2.5 kilometers, it will be charged CNY 1 per half km.

Rail Transit: Its first line was put into operation on October 30, 2002, making Changchun the fifth city in mainland China to open rail transit. As of October 2021, there are 5 operating lines in Changchun rail transit, including Changchun Rail Transit Line 1, line 2, line 3, line 4, and line 8, with an operating mileage of 104.53 km and a total of 87 stations and there are 7 transfer stations.

Far more than that, China Discovery is professional to provide high-quality customizable tours. Before your tour, our travel expert will communicate with you one to one and make an itinerary according to your own interest, need and budget. Every detail - transfer, hotels, attractions, etc. will be arranged well for you and you just need to focus on sightseeing. Feel free to contact us to start your worry-free private tour now! 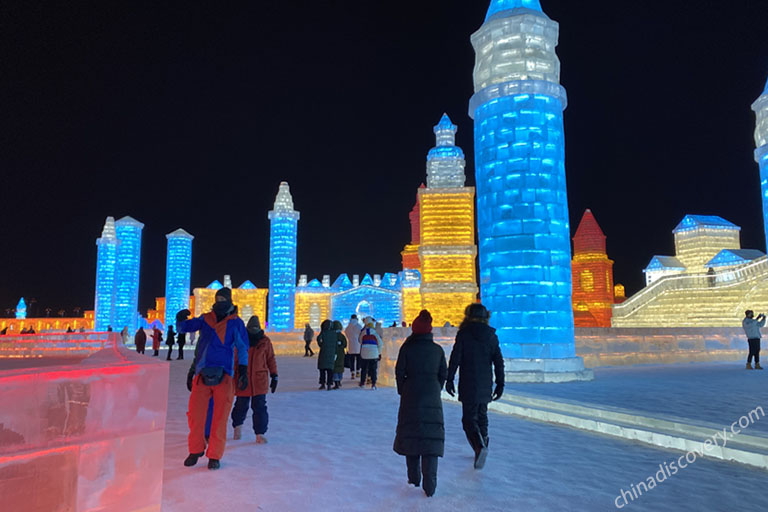 Top 3 Changchun tours chosen by most customers to explore Changchun in the best way. Check the detailed itinerary, or tailor your own trip now with us. 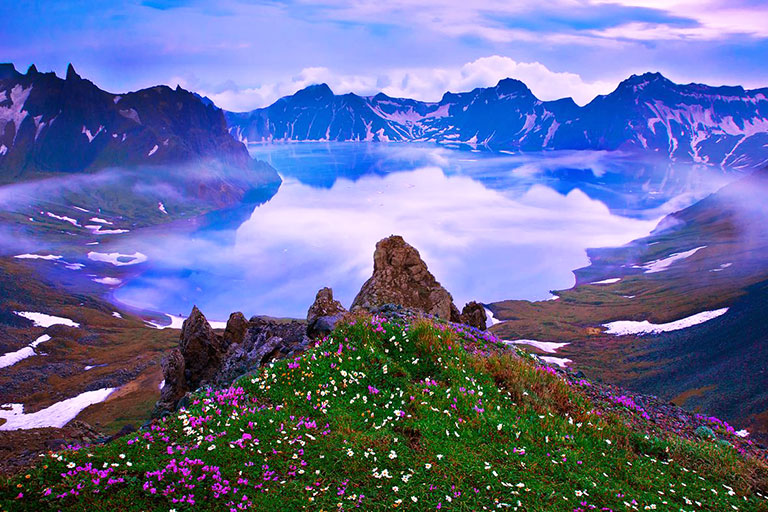