Tiger Hill or Hu Qiu (虎丘) in Chinese is an attractive tourist spot located in the northwest of Suzhou City. With a history of over 2,500 years, Tiger Hill enjoys lots of historical legendary as well as old buildings. The leaning pagoda is the most highlighted part which makes Tiger Hill a must-see.

Tickets: 80 RMB on season and 60 RMB off season 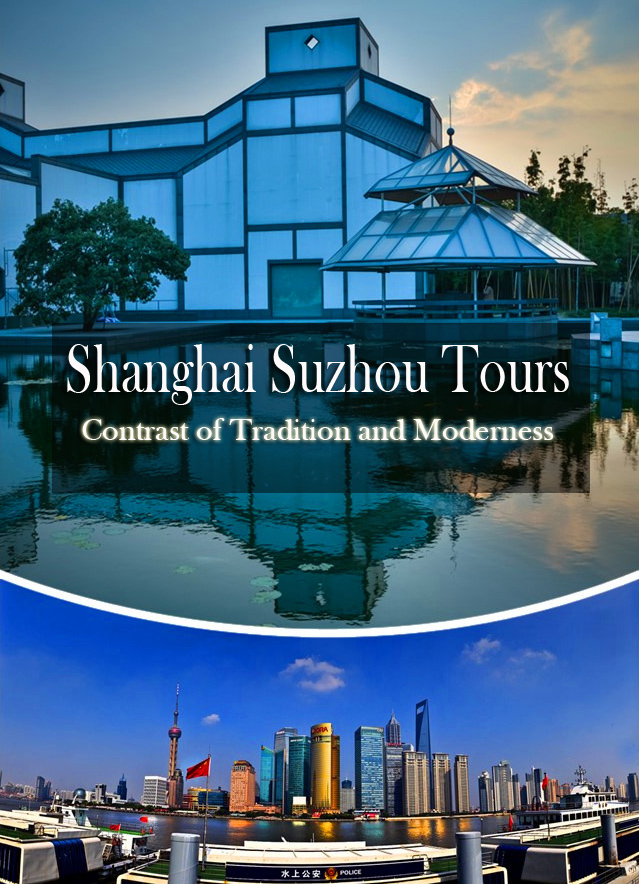 Tiger Hill was recorded in the Shih Chi 《史记》 which is a renowned history work. In Spring and Autumn Period (BC 770 ~ BC 476), the King of Wu State called He Lu (阖闾) died from the war against Yue State. His son Fu Chai (夫差) buried him in the Surging Sea Hill. There goes a legendary that a white tiger came to the hill three days later. So people renamed it as Tiger Hill.

Located in the north west of Suzhou City, Tiger Hill Scenic Spot is a hillock about 30 meters in height. Small as it is, it enjoys enchanting natural landscape and a dozen of historical & cultural relics. Therefore, it was reputed as the No.1 Sight in Suzhou and National AAAAA Scenic Spot. Great Litterateur Su Shi once said that “What a lifetime pity it is if you have been to Suzhou without a visit to Tiger Hill”.

Tiger Hill is place full of legendary. While visiting its attraction, you can imagine what seeming unbelievable has been happened here.

The millennium-old Tiger Hill Pagoda, also called Cloud Rock Temple Pagoda and standing on the top of Tiger Hill, is the symbol of Suzhou for it can be traced back to 2,500 year ago when Suzhou was founded. As the oldest and largest pagoda in the south area of Yangtze River, it occupies high status in the field of architecture, history and art. The pagoda leans to the north by about 4 degrees. People praised it as The Leaning Tower of Pisa in China. In fact, Tiger Hill Pagoda is constructed earlier and taller than the Leaning Tower of Pisa. Apart from its large scale and long history, the design of Tiger Hill Pagoda also makes it so distinctive. With 7 stories and 8 sides, it is a double-wall bricks pagoda. Many precious cultural relics were found in interlayer between the two walls and now these relics were exhibited in the Suzhou Museum.

Sword Testing Stone is a split stone in the east path to the top of Tiger Hill. In the history, He Lu is a sword fan and collector. He always ordered his officials to look for the best sword for him. One day, he asked Gan Jiang and Mo Ye who are a couple famous for making sword to cast an extremely sharp sword. In order to test the sharpness of the sword, he thrust the sword to the stone and the stone was split.

Sword Pool is another landmark of Tiger Hill. Seeing above, Sword Pool shapes like a sword so it got such a name. It is also said that there were 3,000 sword buried with He Lu here. Emperor Qinshihuang in Qin Dynasty and King Sun Quan in Three Kingdoms Period are both came here for swords. On the stone wall out of the door to Sword Pool is inscribed with four Chinese characters “Hu Qiu Jian Chi” which is the handwriting famed calligrapher Yan Zhenqin (颜真卿). On the tone wall close to Sword Pool is another two red characters “Jian Chi” which is said to be written by Wang Xizi (王羲之)

Broken Beam Hall is a single-eave building made by bamboo and wood only. It was constructed in Yuan Dynasty and enjoys a history of over 600 years. The main beam is made up of two sections, reflecting the wisdom and creation of the workers in ancient times. Four stone tablets are perching in the hall which records the construction and restoration of Tiger Hill and Tiger Hill Pagoda. Knocking the tablets slights, you can hear echo. Thus the tablets are also called Echoing Tablets.

Located in the end of the road uphill, Thousand Men Rock is large rock. According to the legendary, 1,000 workers were gathered in Tiger Hill to build the tomb of He Lu. As they finished their tasks, Fu Chai, the son of He Lu worried that grave robbers would came here if they knew his father was buried here. He came up with trickery. Hu Chai killed all of them and their blood colored the stone into red. Whenever it rains, the rock will turn to deep red till now.

Wanjing Villa is an archaistic garden in the southeast piedmont of Tiger Hill. Walking through the big door frame, you began to view the vivid and brilliant landscape, flying waterfall, crinkling lake and undulating ridges. Going up along the steps near the lake, a diversity of well-spaced bonsai trees will catch your eyes. Divided into several sections by handrails, the bonsai trees garden has over 500 bonsais. The finest works of bonsais of Suzhou are all displayed here. One bonsai called Ancient Sageretia is the treasure of Wanjing Villa. Regard as the King of Bonsai, it is more than 40 years old and 2,000 kg in weight.

In Suzhou, what you can’t miss is the colorful Tiger Hill when the spring comes. Annual Artistic Flower Show usually takes place from March to May. During this period, Tiger Hill are scattered with sweet-scented flowers. Besides admiring the beauty of flowers, you could also watch the interesting show like tea-making performance, folk dance and music show. Focusing on different themes, Tiger Hill will be decorated in different style. Some cartoon figures made by flowers and other bamboos are waving their hand to you and the famers made by straws are carrying a load or pulling a cart. By enjoying Artistic Flower Show, you will find the spring is not only beautiful but also interesting.

In order to carry forward Suzhou folk culture, bring back the traditional appearance, and exhibit humanistic amorous feelings of Suzhou, Autumn Temple Fair will be held in Tiger Hill periodically (always from September to October). It is the best fair to appreciate folk performance, feel folk culture and taste Suzhou style snacks. The main color of the temple fair is golden and red, which mean harvest and happiness. When the Autumn Temple Fair takes place, Tiger Hill becomes a bustling place where the northern and southern styles of performing arts with gongs and drums can be seen. Dragon-dancing and lion-dancing are also exciting. In the west side of Broken Beam Hall, there is a food street where you can taste local food like different kinds of pastry. 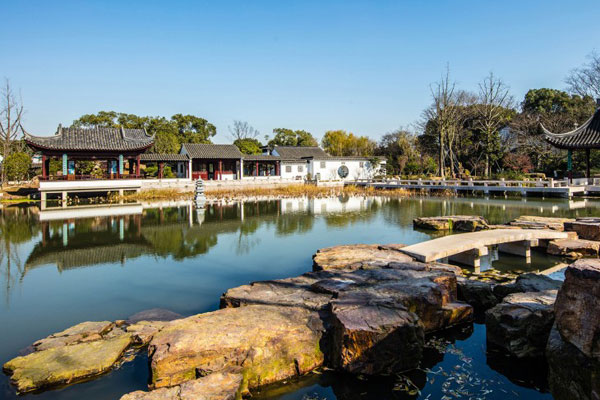 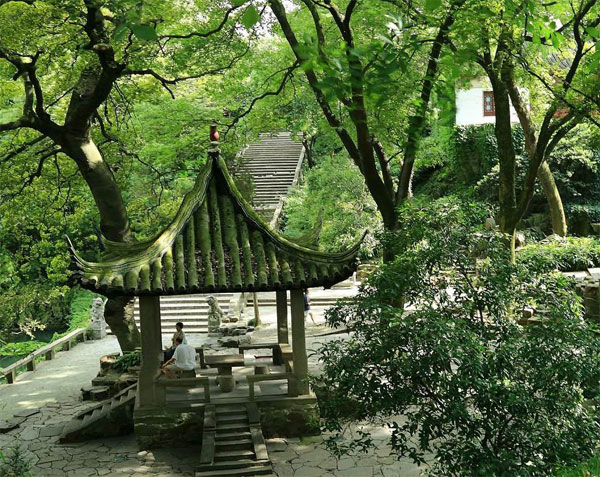 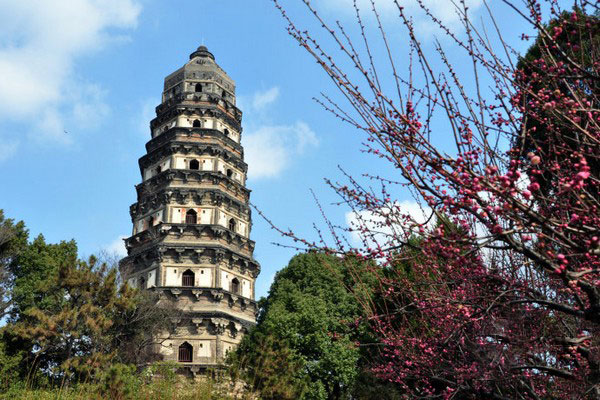 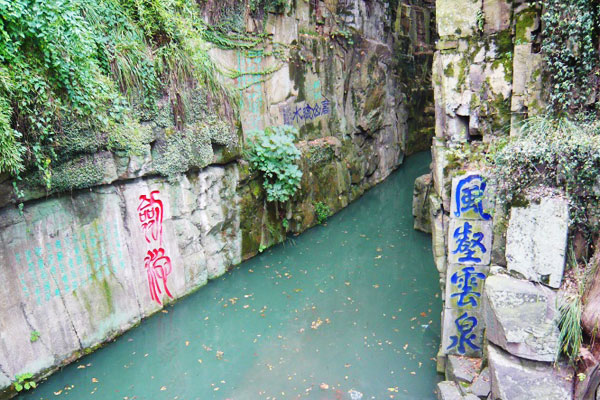 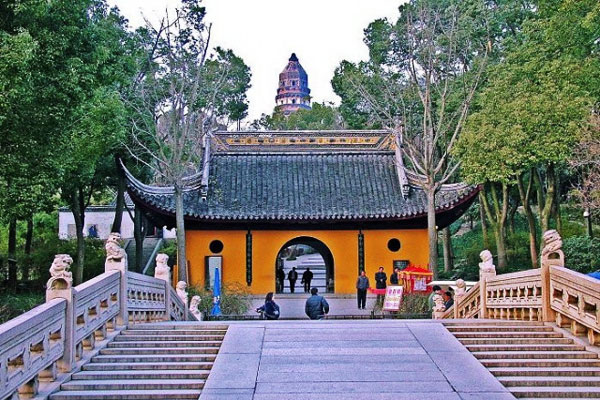 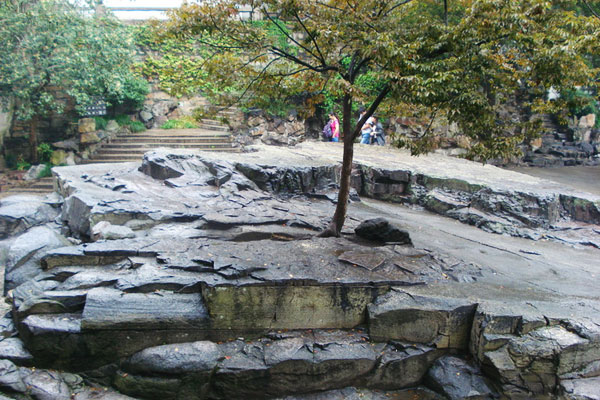 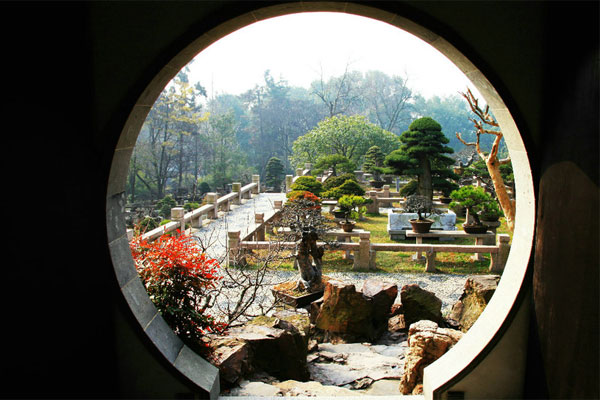 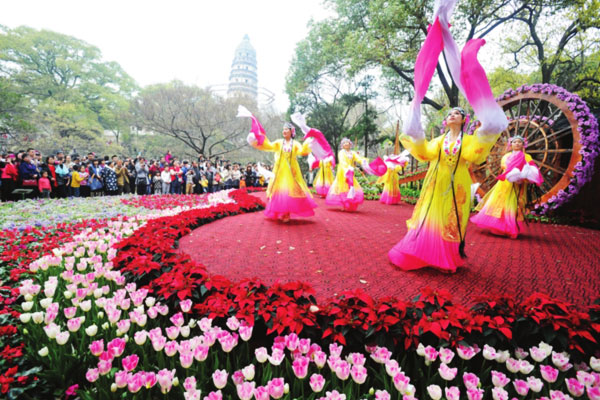 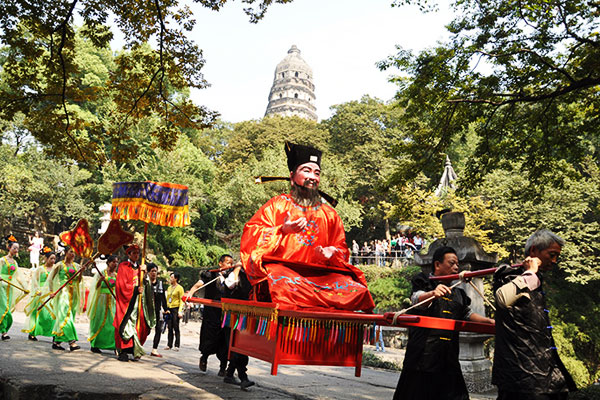 There are two routes are recommended, one route starts in the First Gate of the temple in in south and the other starts in the North Gate Tourist Service Center.

After entering the First Gate, your first destination is Broken Beam Temple where you can admire the excellent architectural skills in ancient times. Then transfer to Hanhan Spring which is said to be sacred spring can treat disease. After that, turn to Sword Testing Stone, Tomb of Zhenniang, Thousand Man Rock and Sword Pool to explore the old history. The next attraction Tiger Hill Pagoda is the most highlighted and can't be skipped. With a visit to the Mahavira Temple and the 53 Steps of Stone, go to the Villa with 10000 Scenes to enjoy the bonsai trees.

Starting from North Gate Tourist Service Center and having a short look at the Shrine of Sun Wu, walk to Garden of Water-side Pavilion. Visit the Broken Beam Hall and the Small Wudang Then. After that, seek for the old story of Thousand Man Stone and the Tomb of Zhenniang. Then, turn to Sword Testing Stone, Broken Beam Hall and leave. 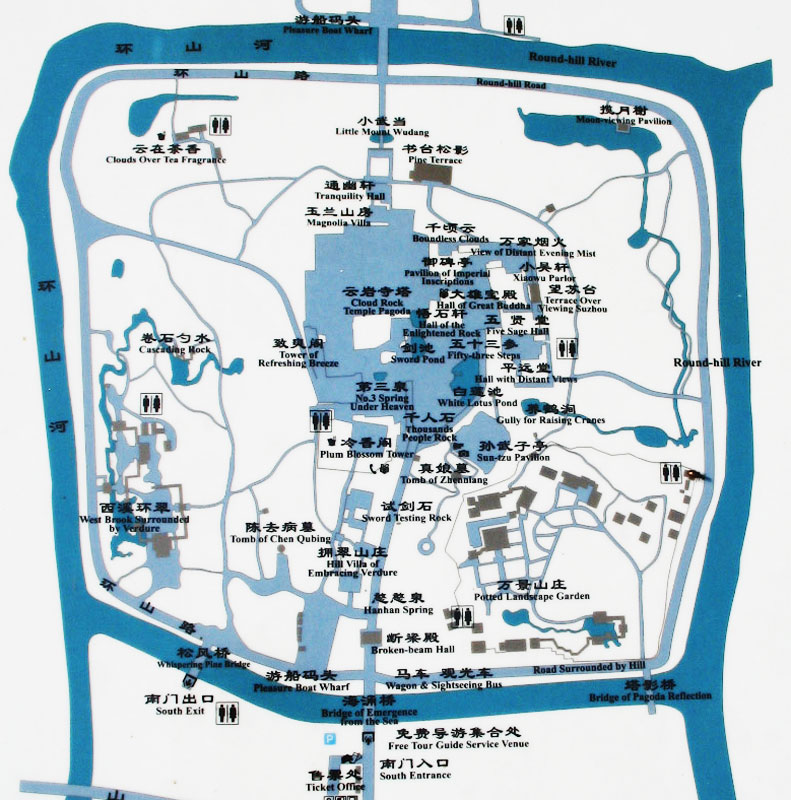 Tiger Hill is located in the northwest of Suzhou City, with a short distance away from some charming gardens in Suzhou.

By Metro: Metro Line 2 is available but it can’t bring you to Tiger Hill directly. Get off at Shantangjie Stop and then catch one bus to you destination. 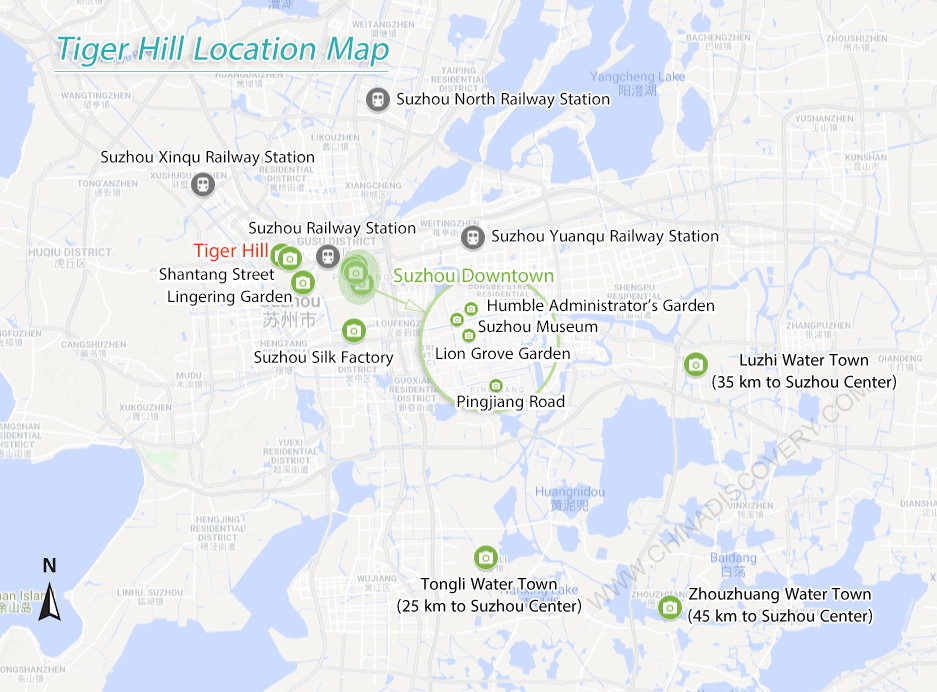 There are boat, carriage and sightseeing bus available to save you time and energy.

Boat: Taking a shuttle boat between south gate and north gate of Tiger Hill will give you an opportunity to admire a moving picture. The fee is 100 RMB per boat for single trip and 160 RMB per boat for round trip.

Carriage: It would be interesting to take a carriage which also runs between the south gate and north gate. Ticket is charged for 15 RMB per person for single trip.

If you want to get rid of hustle of public transportation and troublesome navigation, you can book a private tour package which covers sightseeing, dining and transfer from us. Our knowledgeable local tour guide and skilled driver will escort you to Tiger Hillwith speed and convenience, and take care of all the details. You just need to focus on sightseeing. 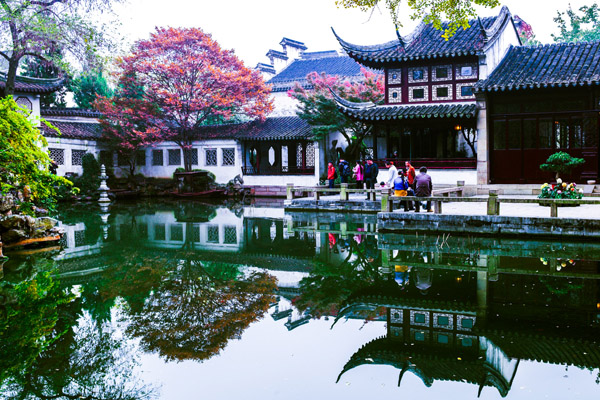 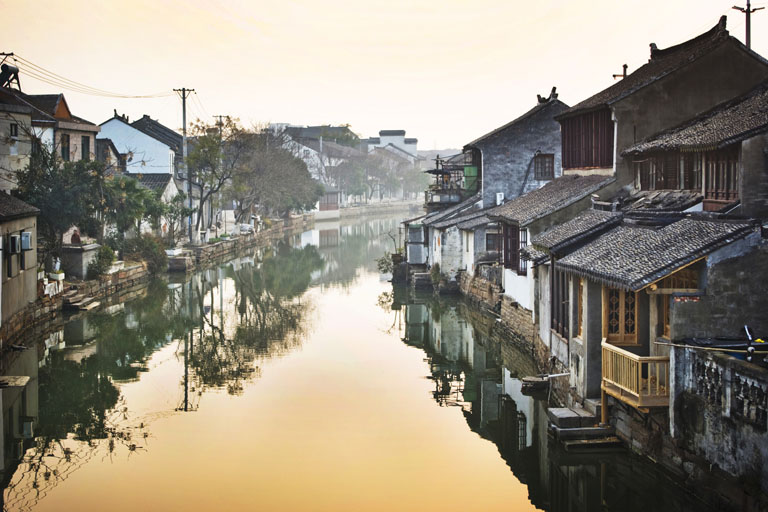 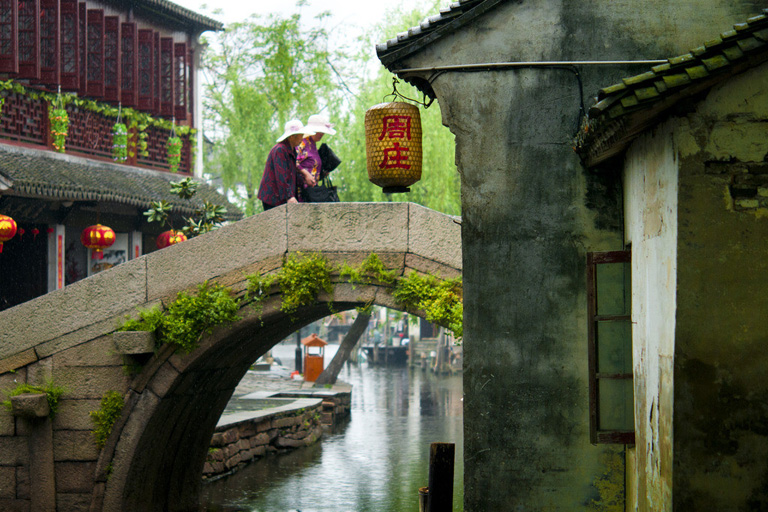