Wudang Mountain has long been a cherished Taoist Mountain in China, and now also a famed scenic area to explore the Taoist culture as well as enjoy the beautiful natural scenery. Tai Chi, short for Tai Chi Chuan is China’s precious intangible cultural heritage. It focuses on Chinese Confucianism, great harmony of Taoism and Concepts of Yin-yang. More than a kind of Chinese martial arts, it is also a good way to create an overall well-being and improve physical health. Featuring in its agility, tardiness, inflexibility as well as yielding at the same time, Tai Chi has spread worldwide and been practiced by many exercisers. Wudang Mountain is believed to be birthplace of Tai Chi. Without a doubt， a Tai Chi experience will make your Wudang journey more interesting and meaningful.

Why Choose Our Tours

Origin and Development of Tai Chi

It is said that the Taoist holy man Mr. Zhang Sanfeng set up Wudang Sect in Wudang Mountain in the early Ming Dynasty (1368) and recruited followers from different places. After years of the study of Taoism, he made a great contribution to promoting Taoist theory. Besides, he created several Martial arts with using fist only, Tai Chi included. One legend tells that when Zhang Sanfeng practiced in a cave, he found a magpie and snake fighting. The magpie took the initiative attack and the snake just avoided hitting. When the magpie was exhausted, the snake gave a deadly strike. Illuminated by the snake, Zhang Sanfeng created Tai Chi which is famous for conquering the unyielding with the yielding and coping with all motions by remaining motionless. Because of his Kungfu accomplishments and Taoist attainments, Zhang Sanfeng enjoys a long standing reputation. The Emperor Zhu Di has invited him to the Forbidden City to propagate Taoism in spite of his refusal.

Afterwards, Tai Chi was come down in Wudang Mountain. On the basis of Zhang Sanfeng’s accomplishments, many successive generations continue the traditions and several branches of practice have been evolved over years. Since the founding of People’s Republic of China, it has experienced a rapid expansion and the Tai Chi players are popping up all around China. As the birthplace of Tai Chi, Wudang Mountain is still popular place for learning Tai Chi. Many modern style of Tai Chi traced their development to several schools, most influential schools including Chen (陈氏), Yang (杨式), Wu(吴氏), Wu(武式) and Sun(孙式).

At present, there are many Scientific Research Departments researching on Tai Chi from the perspective of medicine, physiology, psychology, biochemistry etc.. Their research shows that playing Tai Chi is helpful to prevent or cure some chronic diseases, like hypertension, heart disease, arthropathy, intestinal tract disease etc.

As the name implies, Tai Chi 13 Form means 13 groups of movements (60 postures) with a strong purpose of offense and defense. It was the mother of all Tai Chi forms and created by Zhang Sanfeng. People praised it as the treasure of Chinese martial arts and the essence of Tai Chi. The 13 groups of movements were created according to Eight Extra-Meridians (八脉) which connect with five internal organs. The 13 Form contains eight basic movements and five steps and the two are integrated with each other closely. The eight hand movements were derived from Eight Trigrams (Pa-kua), which can be interpreted as heaven, earth, water, fire, wind, thunder, lake and mountain. It can be divided into two parts – four primary hands warding off, pulling back, pressing and push) and four corner hands (pulling down, splitting, elbowing and shouldering). The five steps refers to five footwork sills, namely advancing forward, retreating backward, stepping to the left side after faking right, stepping to the right side after faking left, and settling at the center.

For thousands of years, the Wudang Taoism has always been a key school of Chinese Taoism, and has the same religious doctrine and dogmata with Chinese Taoism. This religion put emphasis on the faithful filial piety ethics and the harmonious combination of three religions, namely the Taoism, Confucianism and Buddhism. Besides, Wudang Mountain is preferred for its Wudang martial arts. The famous Tai Chi also called shadowboxing, Eight Diagrams Palm, Xing Yi Quan, etc. were originated there. Therefore, so many martial arts likers visit Mount Wudang from different countries and regions to feel its charm and the benefits to their bodies and minds.

Hugging a Ball – relaxing chest and arching back

Exploring –pointing up the head lightly

Flapping – differentiating between the empty and full, namely Yin and Yang

Loading– coordination of upper and lower parts of body

Separating – using the mind instead of force

Surging – harmony between internal and external

Dissolving - connecting the mind and the breathe

Push with both Hands – find stillness within movement

Pressing down – movement and stillness present at once

Finishing Phase – continuity and evenness through the form 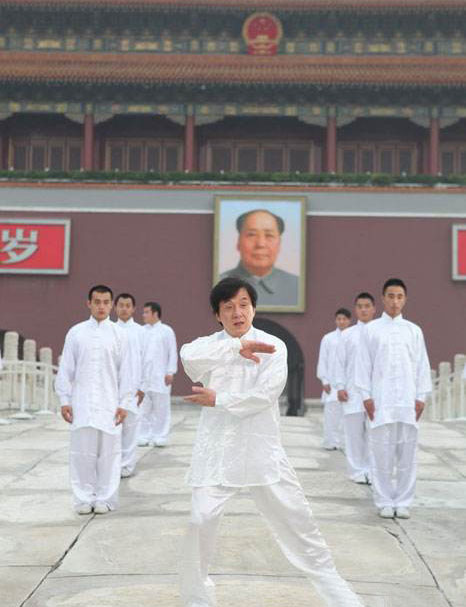 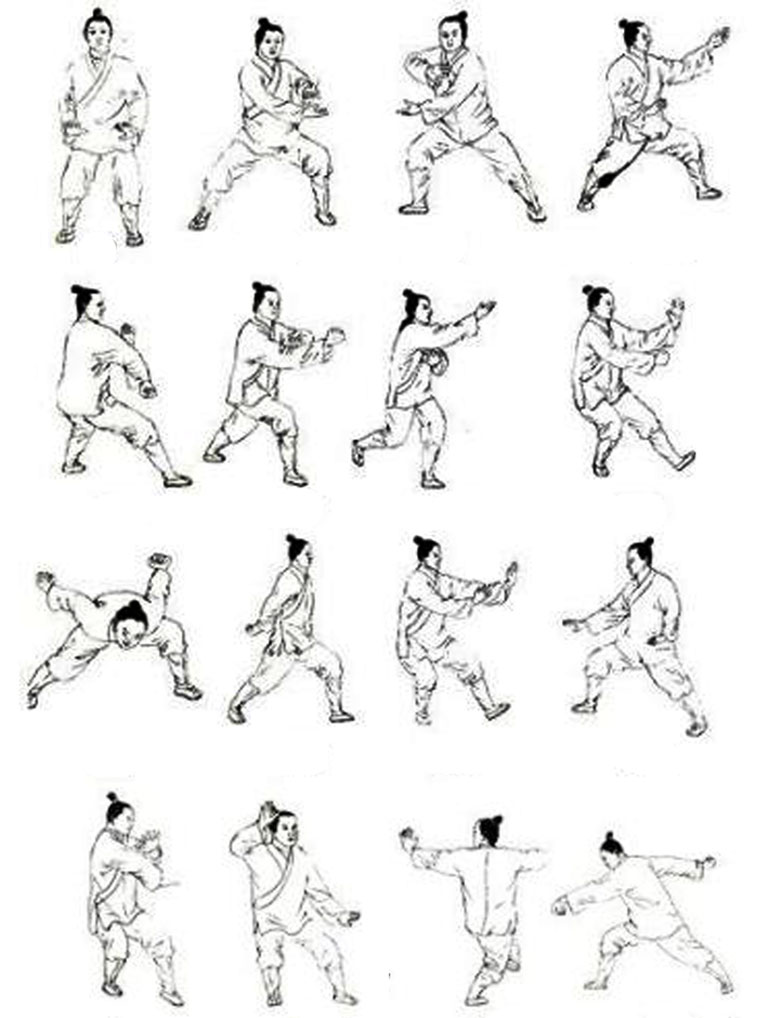 Among the many Kungfu Schools in and around Wudang Mountain, the Wudang Daoist Traditional Kungfu Academy is a professional and old one. It was established in 2004 by Taoist priest Yuan Shimao – the 15th generation of Zhang Sanfeng and the disciple of Zhong Yunlong (famous Taoist priest, once the abbot of Purple Cloud Palace). Mr. Yuan was the champion in three items of the Third World Traditional Kungfu Championships. He and his group have performed Wudang Kungfu in many important occasions, like World Martial Art Expo in Beijing, International Martial-music Festival in Moscow, Spring Festival Gala in Beijing etc. After several years’ exploration, Mr. Yuan adopts many effective teaching methods in accordance of different students with different learning period and learning content to make sure everyone able to get the essence of Chinese Kung Fu and feel the mystery of Taoism.

In order to make students learn in a spacious site with the atmosphere of Taoism, all the martial art classes will be given in the Yuxu Palace – the largest Taoist palace in Wudang Mountain. With red walls, green tiles, fresh air, and elegant surrounding environment, this palace is a wonderful place for self-cultivation. The teachers master a good of ability of Kungfu as well as English. There are various kinds of Chinese martial art classes available in Wudang Daoist Traditional Kungfu Academy, and Tai Chi attracts more Kungfu fans.

Generally, the classes can be divided into two groups, short-term study and long-term study. If you are a traveler with limited time but want to experience the joy of playing Tai Chi, it is a good idea take part in the short Tai Chi experiencing classes. You can spend 0.5~1 day or more days playing Tai Chi with the guidance of the coaches. In the study, you will get a brief understanding of Tai Chi and learn the basic postures. If you are a Tai Chi fan and want a little further study, some other classes are available. Usually, it takes 10~15 days to learn Tai Chi 13 Form or Tai Chi 28 Postures Course and 20~30 days to learn Tai Chi 108 Postures Course. Of course class lasting several months can also be tailor-made according to your needs. The school offers meals, accommodation and Kungfu uniforms. Please note that the short-term classes are not available during the summer vacation (July ~ August) usually.

For Kungfu enthusiasts, you can spend 3~5 years learning Chinese Kungfu, including Tai Chi, Qigong, Ba Gua Zhang and other martial arts classes if time permits. There is a list of class schedule for your reference, and it might be modified in different seasons. No classes are arranged in the afternoon of Wednesday and whole Thursday, and the students can take a rest or travel around.

How to Get to Wudang Daoist Traditional Kungfu Academy

There are shuttle buses connecting Wudang Scenic Area with the airport, railway station and Shiyan City. For Independent travelers, you are advised to transfer to Wudan Mountain Scenic Area first, then you can take a bus to Huoshenmiao Station (火神庙站), which is only 800 meters away from the school.Check more at Wudangshan transportations 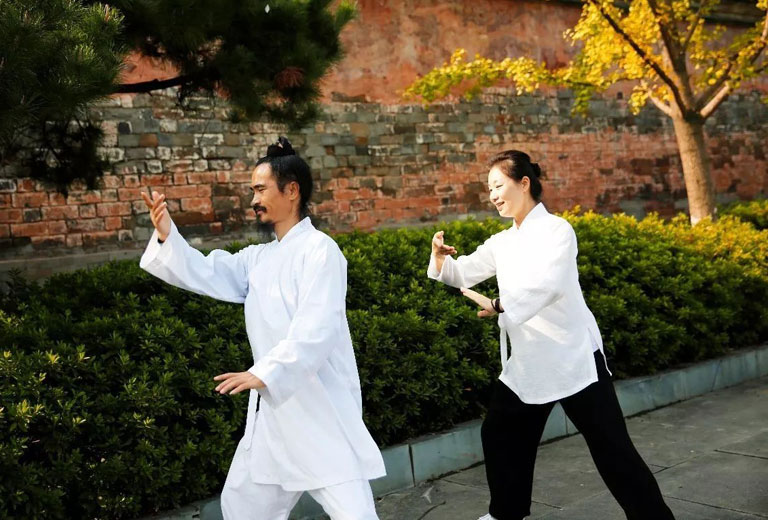 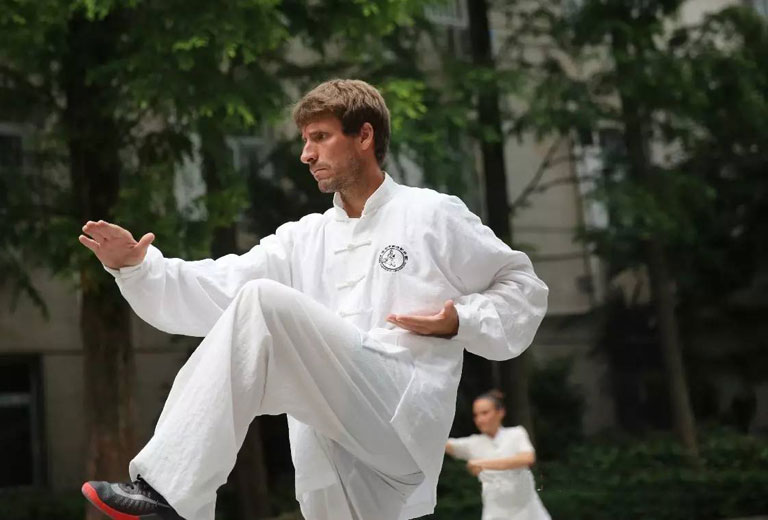 The student is playing Kungfu 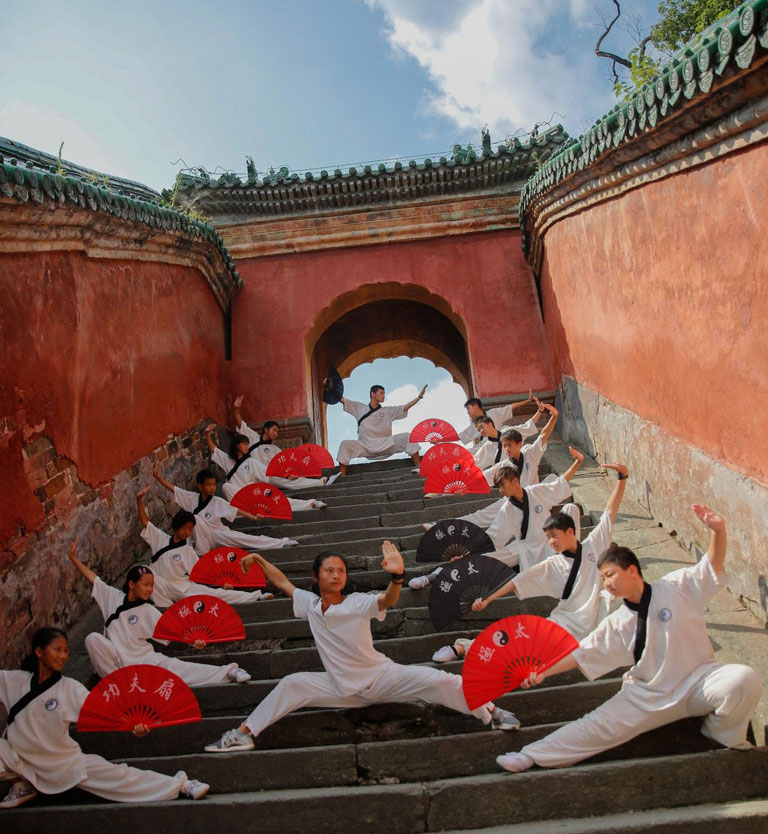 The Sutudents in Wudang Mountain 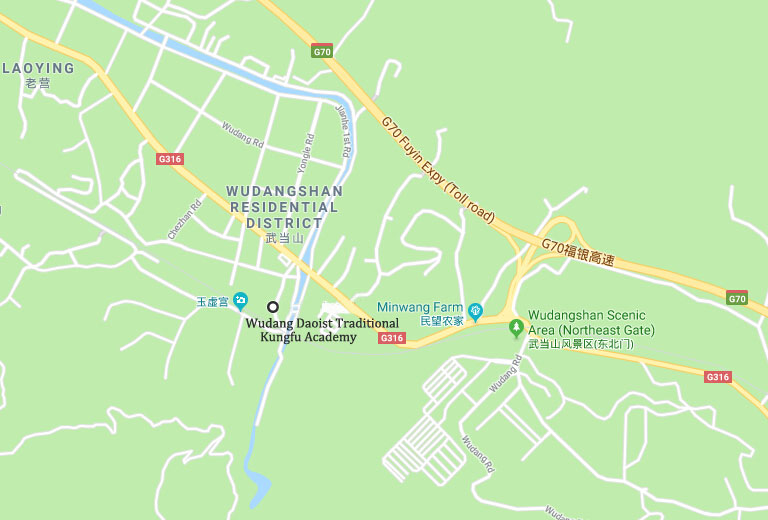 In 2007, Taoist Priest Chen Shixing, another disciple of Zhong Yunlong, founded China Wudang Kungfu Academy. Then the school inherited thousands of years Wudang culture, strived to brighten the Taoism thought, expresses Taoism within Chinese martial arts, and applying Taoism in preserving Taoism. During the next years, it has developed to a big Kungfu school attracting many Kungfu fans. Paying attention to every detail, this school provides the good training environment, like skilled coaches, spacious training ground, healthy food, and comfortable accommodation. As the authentic Wudang Sanfeng Sect, the school is on a mission of spread Daoism and Chinese Kungfu over the world.

They offer a large variety of classes to cater to different people’s purpose, like getting a better understanding of Taoism, learning Kunfu Skills, becoming healthier etc. There are long-term classes and short-term classes in China Wudang Kungfu Academy as well. The short-term classes vary in different learning contents and periods. Check the following short-term Tai Chi classes’ information:

How to Get to China Wudang Kungfu Academy

If you are an independent traveler, you can get to Wudangshan by train or flight. There are daily buses running between Wudang Railway Station Wudang and Mountain Scenic Area with a stop at Haokoucunjiuzu (蒿口村九组), close to China Wudang Kungfu Academy. If you want to travel from the airport directly to the school or the city area, you need make a transfer. Check more details at Wudangshan transportations.

Want to play Tai Chi in Wudang Mountain? No problem. Tai Chi experience can be arranged in the Qiongtai Palace. In the early morning, our guide will can accompany you to Qiongtai Palace and join the one hour’s interesting class. Then you can go on with your sightseeing trip, admiring the ancient Taoist building complexes in Wudang Mountain and appreciating the natural beauty. After sucking the Taoist fragrance in the day tour, visit Qiong Palace and enjoy another one’ hours class again.

In your sightseeing tour, you might meet some Taoist priests playing Tai Chi or other Chinese Kungfu in Zixiao Palace. 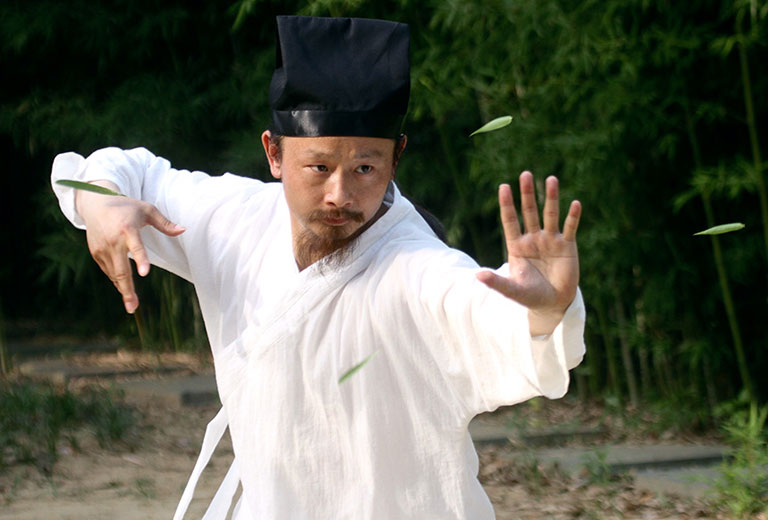 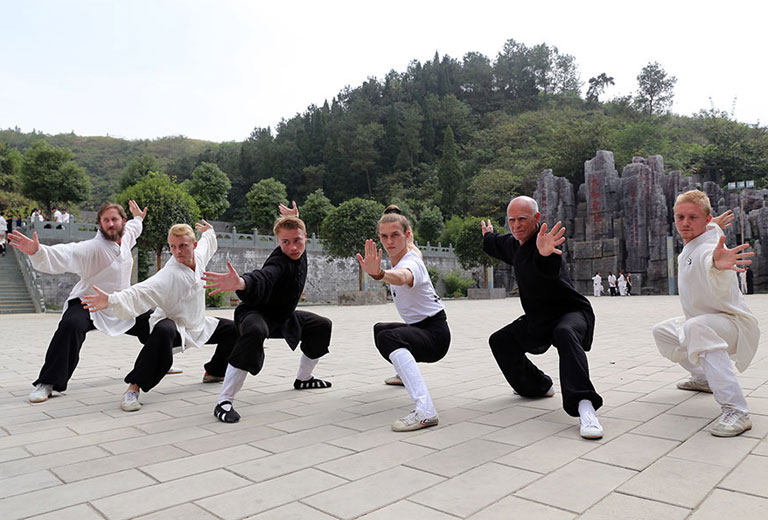 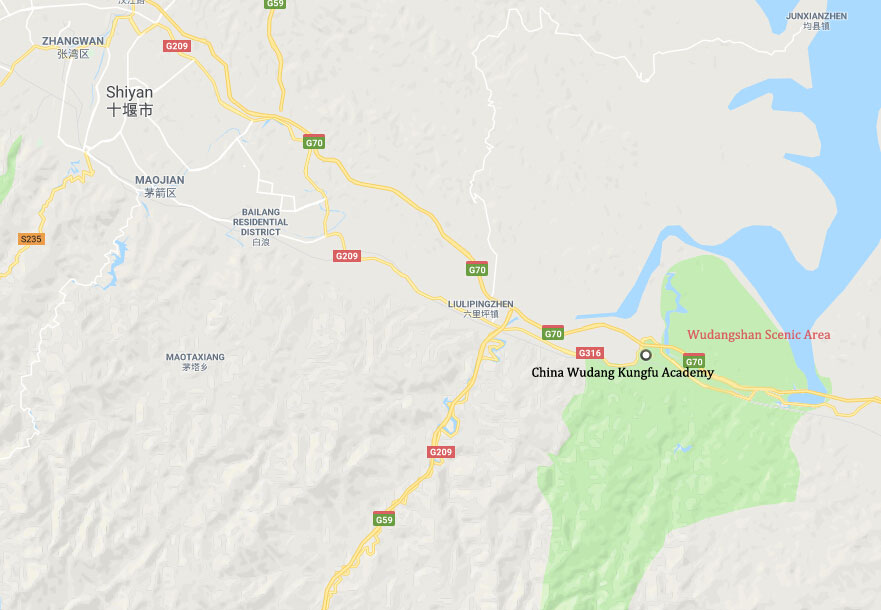 Are you interested in Taoism and Tai Chi? Or do you want to have a short experience of playing Ta Chi? Feel free to contact us and our travel consultant will customize a private Wudang Mountain Tai Chi tour for you. You could take a wonderful cultural exploration and touch the real Chinese Kungfu while feasting your eyes on the spectacular natural view of Wudang Mountain.

During the tour, you will get rid of the hustle and public transportation and troublesome navigation. Our local guide and driver will pick you at the airport or train station, and escort you to any attractions with speed and convenience. You will be taken care of all the time. The professional travel guide can explain you the history and culture of the different Taoist palaces, and some interesting legends.

Top 3 Wudangshan tours chosen by most customers to explore Wudangshan in the best way. Check the detailed itinerary, or tailor your own trip now with us. 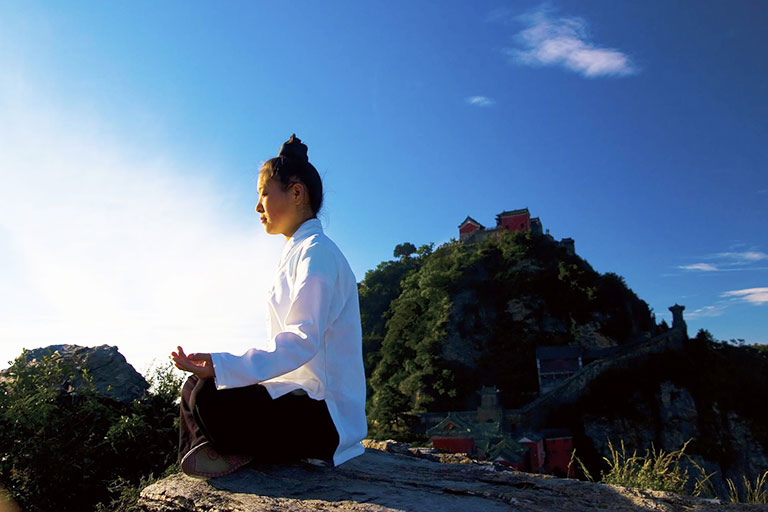