You are here: Home » Destinations » Chengde

Chengde, used to be called Rehe, is a prefecture level city in Hebei Province, an international tourism city approved by Hebei provincial government, and a regional central city connecting Beijing, Tianjin, Liaoning and Inner Mongolia. It covers an area of 39519 square kilometers and is only 225 km from Beijing.

Chengde is one of the first batch of national historical and cultural cities. In 1703, Chengde Mountain Resort was built by Emperor Kangxi, which enabled Chengde to be the second political center of Qing Dynasty. Now Chengde is a famous tourism city full of vigor and vitality and is especially popular in summer for its cool weather.

Most people come to Chengde for Jinshanling Great Wall and Chengde Mountain Resort. But Chengde is more than That. You can feel the Buddhist culture of this city in the Outer Eight Temples, admire vast prairie in Bashang Grassland, appreciate strange peaks in Shuangtashan Forest Park, etc. See more Chengde Attractions > 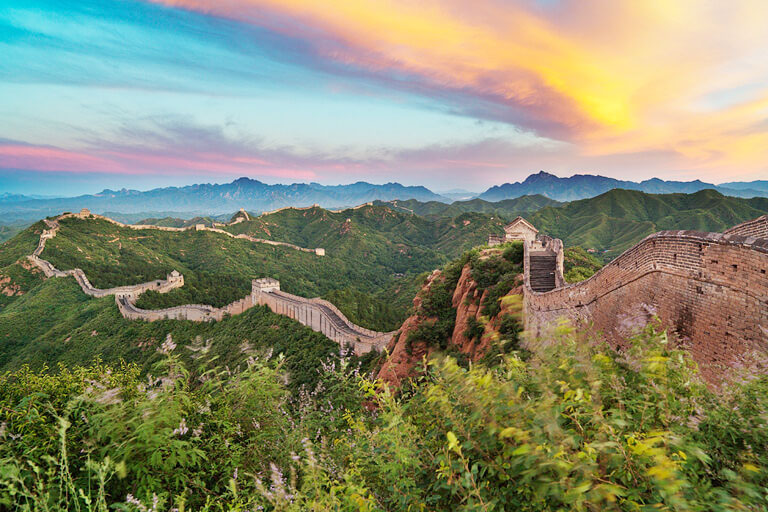 With a perfect fusion of military defense, architectural art and surrounding scenic views, Jinshanling Great Wall is one of the most attractive sections of the Great Wall of China. It is also the great place for photography and hiking. Stretching 10.5 km long from east to west, Jinshanling Great Wall has 67 watchtowers, 5 passes and 3 beacon towers. Located in the mountainous area in Chengde, about 130 km northeast of Beijing, it is much less crowded than any other sections of Great Wall near Beijing City. 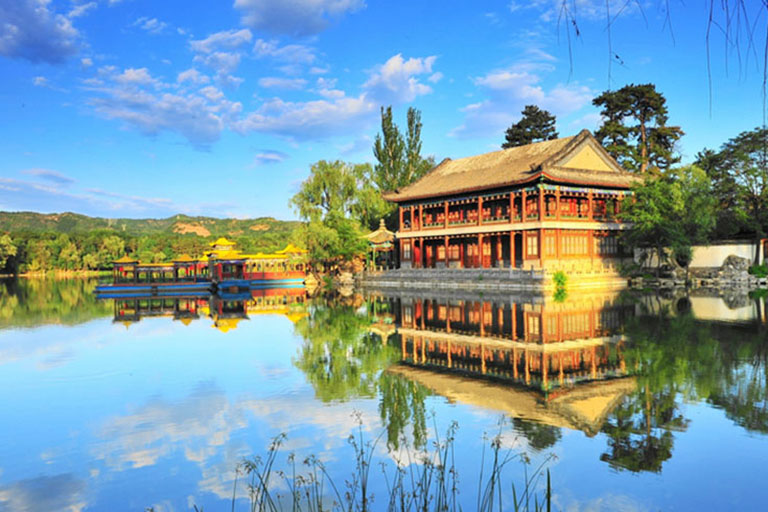 Chengde Mountain Resort, the majestic summer retreat for the emperors in Qing Dynasty, is a large complex known as a model of the perfect combination of Chinese imperial palaces and imperial gardens. Visiting Chengde Mountain Resort, you can not only enjoy the splendor of imperial buildings and gardens, but also learn about some interesting stories of the emperors of Qing Dynasty. Covering an area of 5,640,000 square meters, it is the largest one of the Four Greatest Classic Gardens in China. 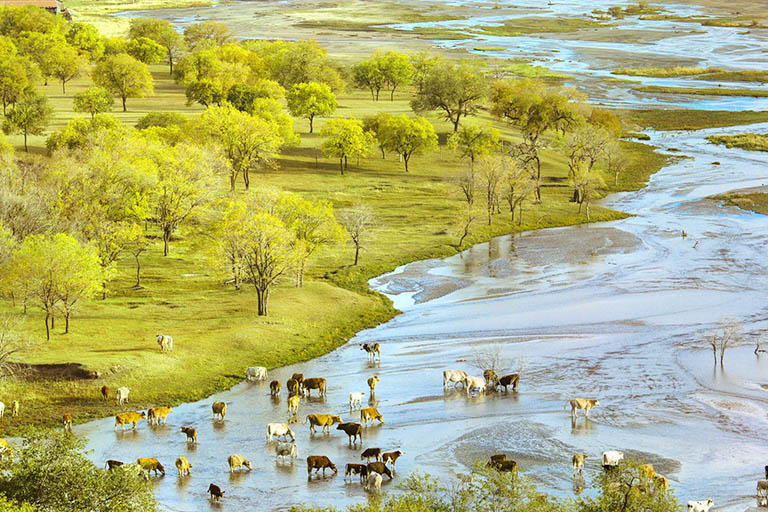 Bashang Grassland covers about 200,000 square kilometers in northern Hebei and part of Inner Mongolia with an average altitude of 1500-2100 meters. There is breathtaking grassland scenery and you can indulge in the natural beauty and get a refreshed mind. It is composed of Mulan Paddock, Fengning Bashang, Guyuan Bashang, Zhangbei Bashang, etc. Among them, Mulan Paddock is the most scenic and popular part. It is one of the first choices for tourism, leisure, and vacation in northern China, especially in summer. 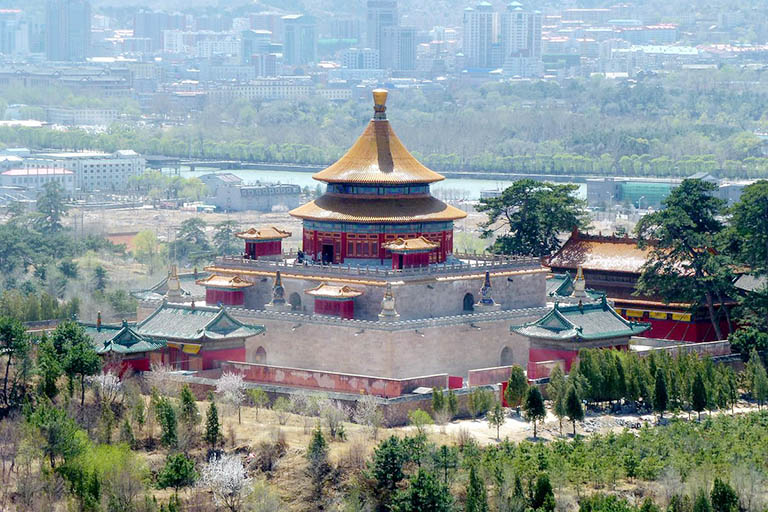 Outer Eight Temples is the general name of eight Tibetan Buddhist temples in the northeast of Chengde Mountain Resort in Hebei Province. They were successively built between the 52nd year of Kangxi (1713) and the 45th year of Qianlong (1780). They got this name because Chengde is located outside Beijing and the Great Wall. The eight temples include Puren Temple, Pushan Temple (no longer existing), Puning Temple, Anyuan temple, Putuo Zongcheng Temple, Shuxiang temple, Xumi Fushou Temple and Guangyuan Temple. 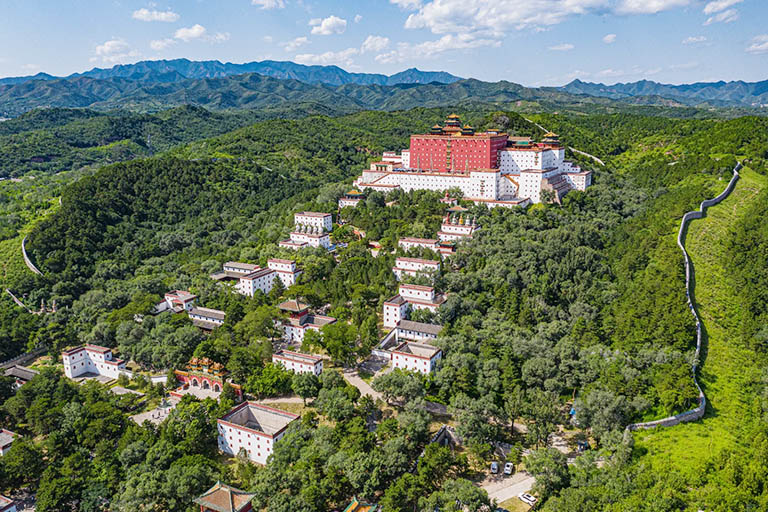 Putuo Zongcheng Temple, also known as "little Potala", is a Buddhist temple modeled on Potala Palace in Tibet. It was built by Emperor Qianlong in the Qing Dynasty to celebrate his 60th birthday and Empress Dowager Chongqing 's 80th birthday. It covers an area of 220,000 square meters, whose main building is located on the top of the mountain with a height of 43 meters. If you haven’t been to Lhasa, Putuo Zongcheng Temple can be an alternative spot to get a glimpse of the magnificent Potala Palace. 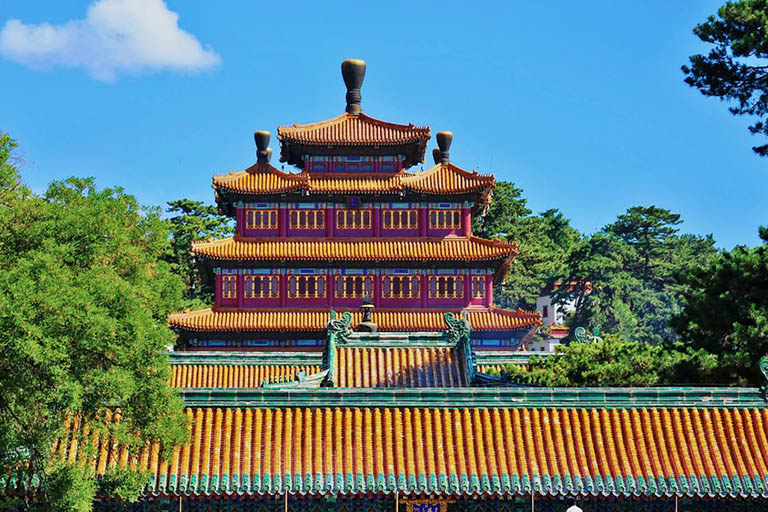 Puning Temple was built in Qianlong period of Qing Dynasty combining Han and Tibetan characteristics. The first half of the temple is in Han style, while the second half is Tibetan style built after Samye Monastery in Tibet. Two different styles of architecture are integrated into one. The whole temple is magnificent, covering an area of 23000 square meters. The main statue of the Buddha in Puning Temple is a 27.21m Avalokitesvara with thousand hands and thousand eyes carved in wood and lacquered in gold. 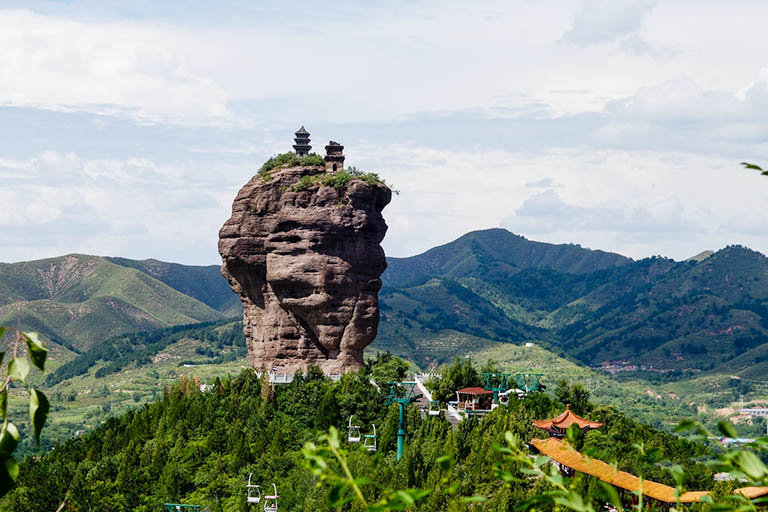 Shuantashan (Two-Pagoda Peaks) Forest Park is the largest natural attraction close to Chengde's city area. The most eyes-catching attractions in the park are two giant rocky peaks with one brick pagoda built at the summit of each peak by Khitan people 1,300 years ago, which makes the whole scenic area so mysterious. Besides Two-Pagoda Peaks, you can feast your eyes on many other natural sights, like strange mountains, rushing streams, lush forests, odd-shaped rocks, religious caves, etc. 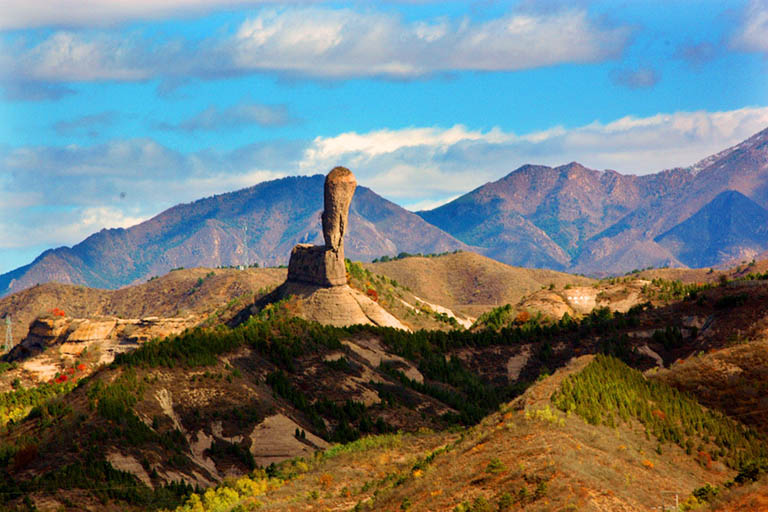 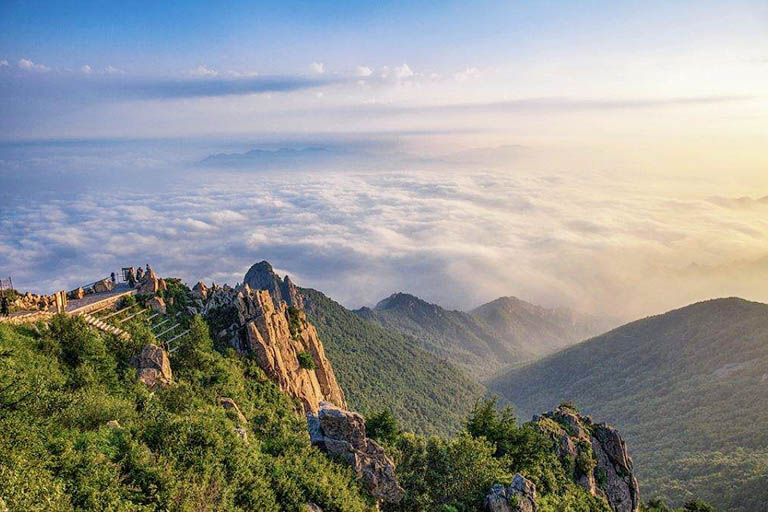 Wulingshan Forest Park is located in the middle of Yanshan Mountains. Waitao peak, the main and the highest peak, is 2118 m above sea level. It is the best point to enjoy the sea clouds, stars, sunset and sunrise. As the imperial Fengshui forbidden area of the Qing Dynasty, it has been banned from tourists for 260 years. Therefore, it maintains a good natural ecosystem. There are mainly four scenic spots: Xianrenta scenic spot, Qinglangjie scenic spot, Longtan scenic spot and the Wulongtou scenic spot.

Chengde Weather and When to Go 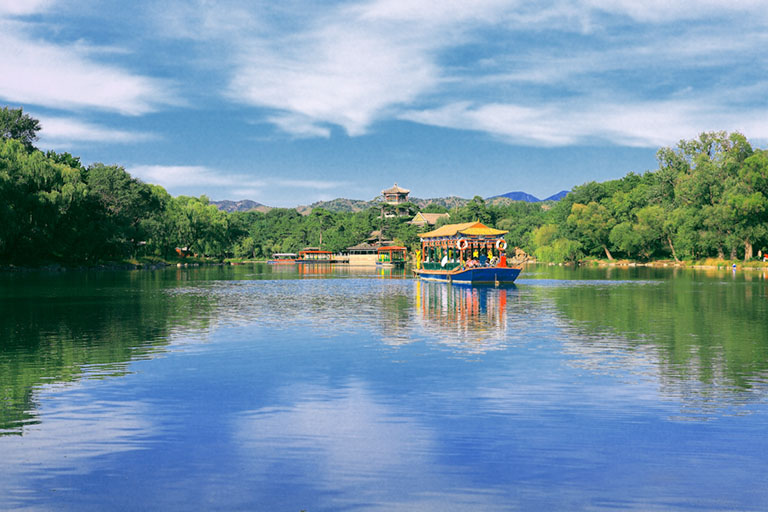 Chengde belongs to mixed Cold Temperate Zone, has a Semi-arid and Subhumid Continental Monsoon Climate. Major tourist area in Chengde, such as Chengde Mountain Resort experiences an emperate Continental Monsoon Climate with mountain climate features, including four distinct seasons (warm spring, mild summer, cool autumn and cold winter) and large temperature difference between day and night. The average temperature of Chengde is about 9℃, and the hottest month is July with maximum temperature within 30℃ and the coldest time is January when temperature drops to -10℃. Moreover, Chengde owns an annual rainfall between 402.3 mm to 882.6 mm in different regions, most concentrate in summer.

Best time to visit: You can travel to Chengde in all seasons, as natural sights vary in season but cultural spots are always suitable for tour. In view of travel convenience and best natural scenery, April to October is the best time to visit Chengde. 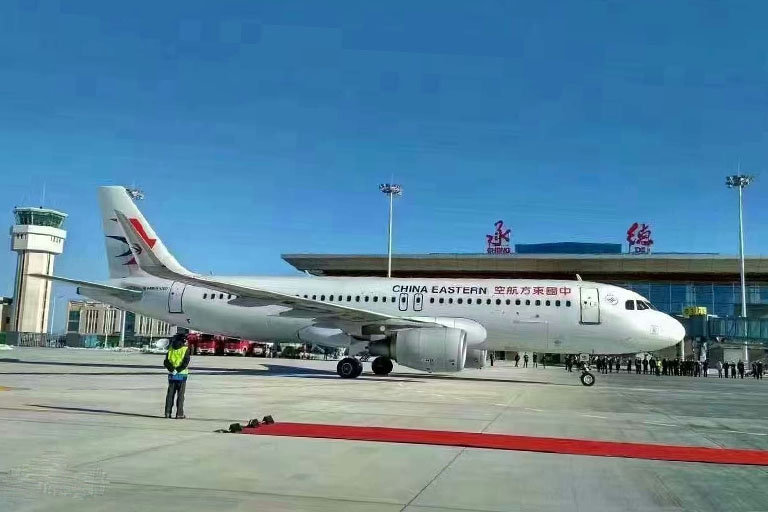 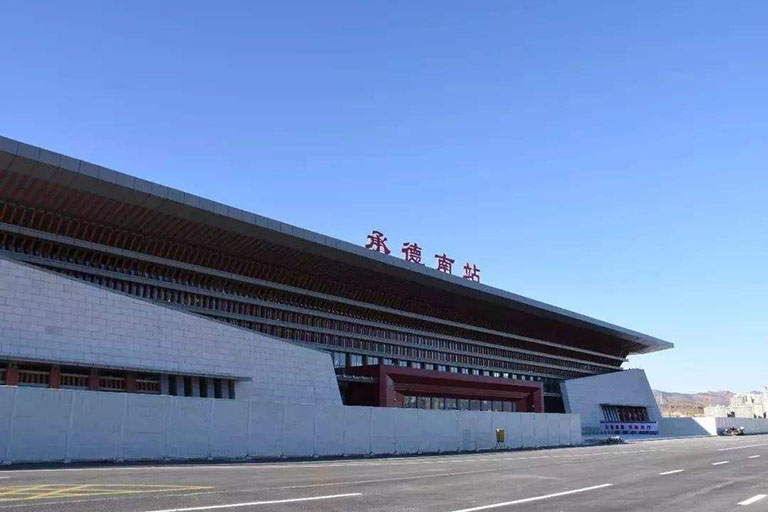 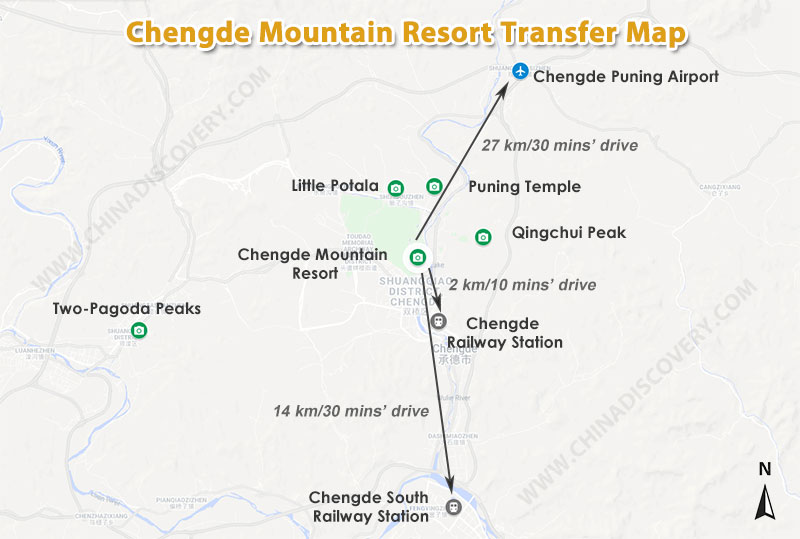 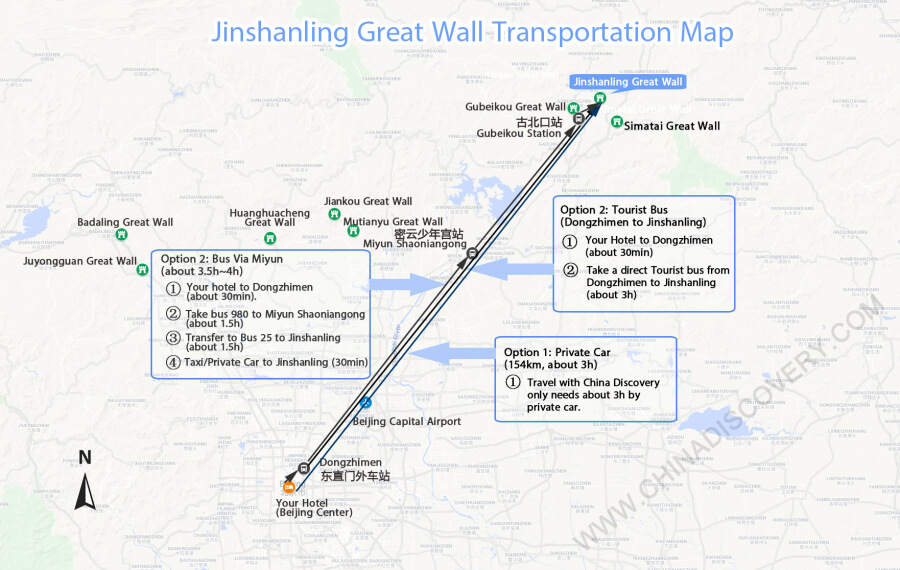 Chengde City is situated northeast of Beijing. It borders Zhangjiakou (in Hebei Province) to the west, Tianjin to the south, Tangshan and Qinhuangdao to the southeast. It’s about 225 km to Beijing, 300 km to Tianjin, 515 km to Shijiazhuang.

How to Get to Chengde

How to Get around Chengde

The attractions in Chengde downtown can be reached by bus or taxi. Subway is not available in Chengde. If you want to vist Bashang Grassland or Jinshanling Great Wall, you can chart a car because they are a little far and public transportation is not very convenient.

Where to Stay in Chengde 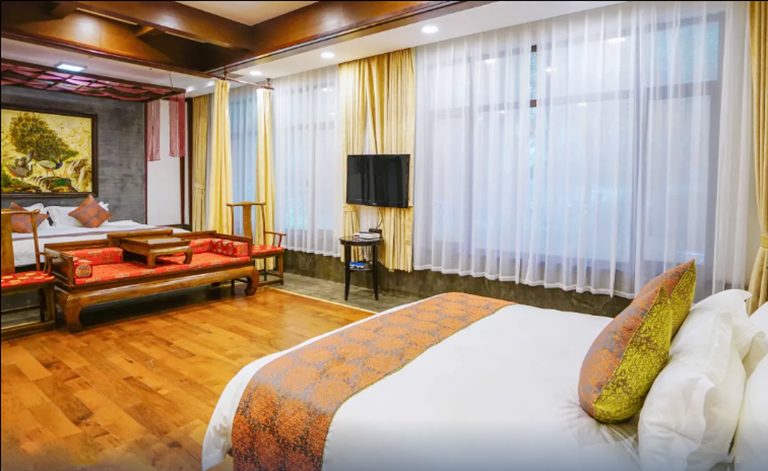 As the main attractions such as Chengde Mountain Resort, Putuo Zongcheng Temple, and Puning Temple are in or around downtown, it is most recommended to stay in Chengde downtown area. If you are going to visit Bashang Grassland, it is better to travel Mulan Paddock part for the beautiful scenery. As it is a little far from downtown, you can just stay in a 5-star or 4-star hotel near the scenic spot. For tourists who plan to hike Jinshanling Great Wall, you can stay in the nearby Gubei Watertown.

Note: The hotels in Chengde may be not as luxurious as the ones in cities like Beijing or Shanghai, and the standards of star-rated hotels are different. To ensure a comfortable stay, 5-star or 4-star hotels are more recommended.

★ Learn more about Where to Stay in Chengde & Recommended Hotels >

For a better understanding of the location of Chengde City and how to travel in Chengde, here we provide some Chengde Maps for you, including Chengde China Map, Chengde Transportation Map and Chengde Attractions Map. Check more Chengde Maps > 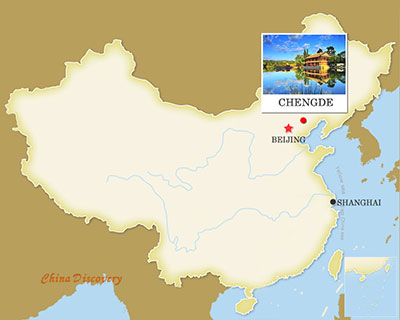 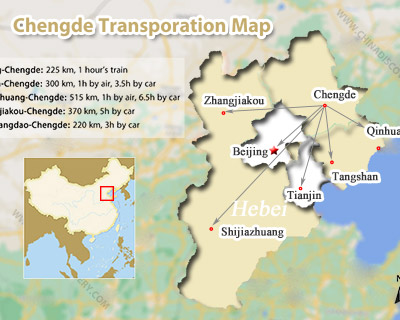 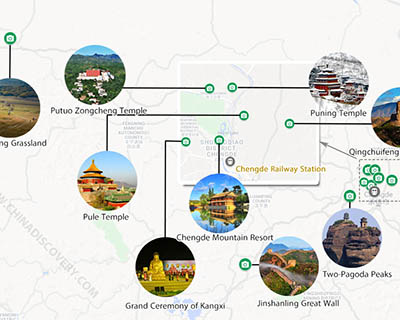 Chengde is usually travelled with Beijing, the capital of China. You can also extend your trip to more scetions of the Great Wall (Mutianyu, Badaling, Simatai, Huanghuacheng, etc.), the nearby Tianjin (Five Great Avenues, Tianjin Eye, Tianjin Ancient Culture Street) or travel north to Inner Mongolia . 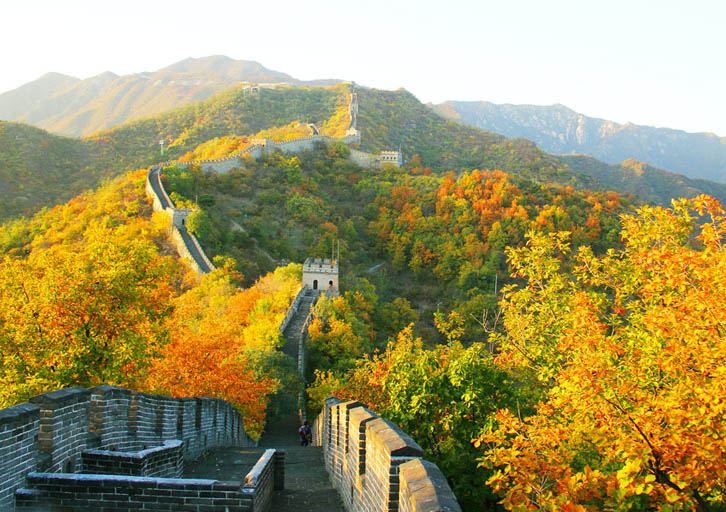 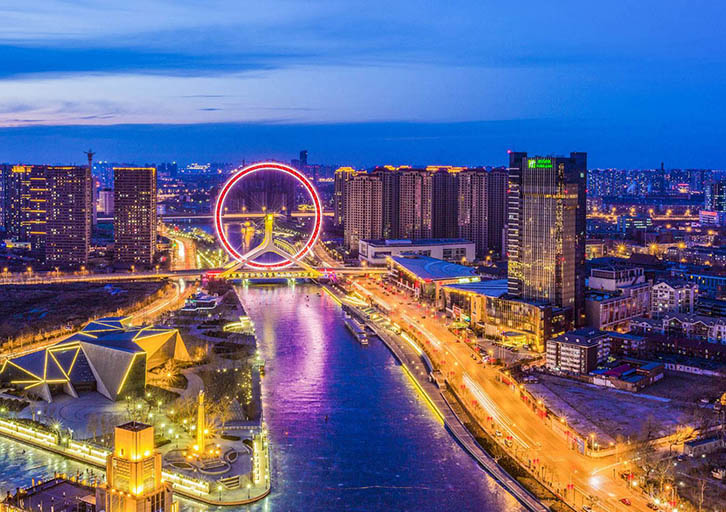 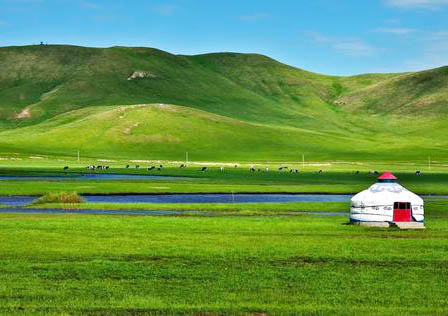 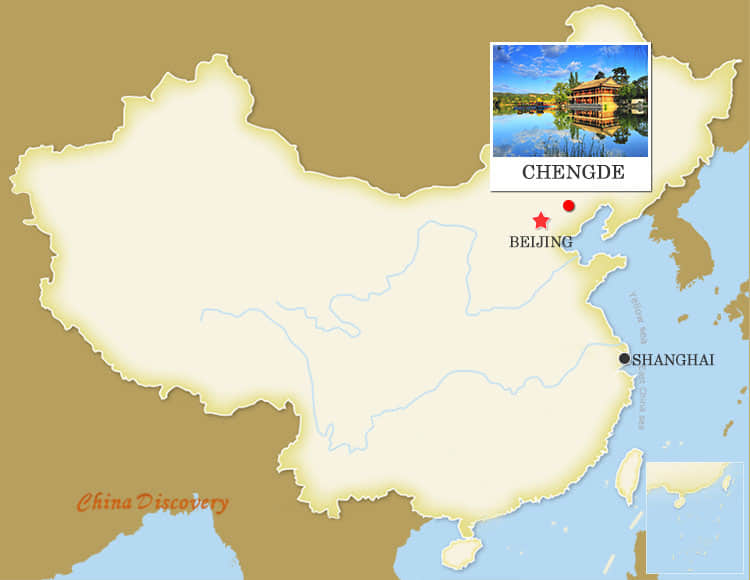 Chengde, a city neighboring Beijing, is known for the Jinshanling Section of the Great Wall and the Imperial Mountain Resort for the royal family in the Qing Dynasty. 2 days is suitable for visiting major spots in Chengde. But tourists usually spending 4 to 5 days traveling Chengde after Beijing.

It's convenient to visit attractions together in the Chengde city center, such as Chengde Mountain Resort, Putuo Zongcheng Temple, Puning Temple, Pule Temple, Qingchuifeng Peak, etc. It’s also unmissable to see and hike along the magnificent Jinshanling Great Wall which is located in the suburban area between Chengde and Beijing. If time allows and you’re quite interested in natural scenery, the picturesque Bashang Grassland is also charming to stop by. Besides Beijing, travelers can also extend the Chengde trip further to Tianjin, Qinhuangdao, Zhangjiakou, and more stunning heritage and nature sights in China. 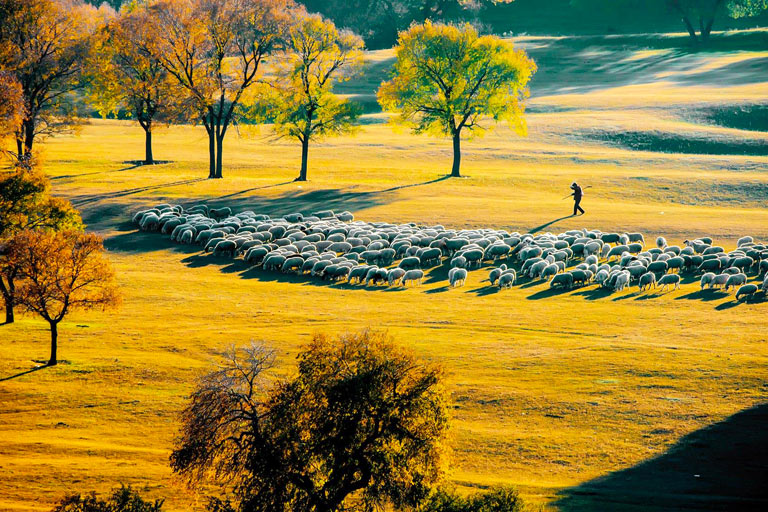