You are here: Home » Destinations » Guilin Tours » How to Get to & around Guilin » Guilin Liangjiang International Airport

Guilin Liangjiang International Airport, referred to as "Liangjiang Airport", is located in Guilin, a famous tourist city in China, 28 kilometers away from the city center. It is an important international tourist aviation hub in China, one of the largest international airports in southwest China. The flights there connect China's major first-tier cities with many well-known cities in East Asia. It is the ninth airport in China that you can apply a 72-hour transit visa-free exemption.

Guilin Liangjiang International Airport has two terminal buildings. The main operating base occupies an area of 155,600 square meters, with 3200-meter runways, 51 parking spaces for planes, and 31 boarding bridges. The flights departing/arriving there connect 76 cities, with 112 domestic and foreign routes, and carried more than 786,000 passengers in 2017, and the total number of take-off and landing flights has reached 62,400 times.

The newly built T2 terminal is the main building of Guilin Airport, which has 3 floors. The first floor is arrival hall with parking lots for airport buses, taxis, cars. On the second floor is the restaurant area for passengers to rest during transit. Free WiFi and charging outlets are provided. The departure hall is on the third floor with a first aid station and a police room. There are totally 17 security checkpoints, 5 international security checkpoints, 25 boarding gates, and self-service baggage checking equipment inside the terminal with real-time flight tables for passengers to refer to. Since it began to operate in September, 2018, it has become the major transportation hub connecting Guilin with the world with the capability of transferring more than 12 million people per year.

Guilin Airport Terminal T1 is a two-storey building with an area of more than 50,000 square meters. There are 17 boarding bridges and 6 arrival baggage conveyor belts. The departure lounge includes commercial catering and other rental service facilities with an area of 6086 square meters. There are restaurants, bookstores, cafes and VIP halls, etc, inside the terminal building, as well as passenger services such as self-check-in, free Wi-Fi, free charging outlets, free drinking water. 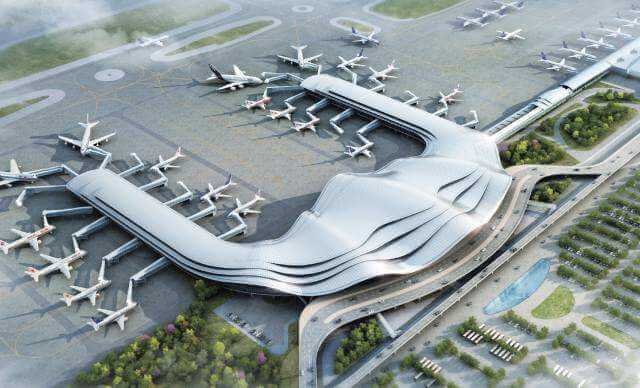 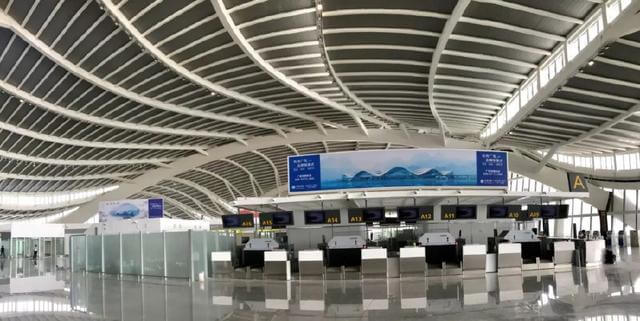 Since 2015, citizens from 10 ASEAN countries (Malaysia, Thailand, Indonesia, Vietnam, Cambodia, Laos, Myanmar, Singapore, Brunei and the Philippines) can apply for a six-day visa-free entry exemption at Guilin Liangjiang Airport, which is not applicable for self-guide travellers. Visitors need be in a tourist group (at least 2 persons) that will be organized and received by a certified travel agency. The agency is also responsible for arranging visa-free groups’ entry/exit from the Guilin Liangjiang International Airport. The tour activities within the administrative area of Guilin shall not exceed 6 days.>> Learn More about Guilin Tour

Passengers can be exempted from visa if they transit from Guilin Liangjiang International Airport to a third country (region) within 72 hours on the basis of their valid international travel documents, the online tickets or related certificates to a third country/region with confirmed flight dates and seats for departure within 72 hours.>> Learn More about Guilin 72-Hour Visa Free Transit Exemption

Since the geological distance from Guangzhou/Shenzhen to Guilin is not far, the flights were all cancelled and replaced by the high speed bullet train.>> Learn More about Trains to Guilin

There are multiple flights departing from Beijing to Guilin all year around, operated by Air China, Grand China Air and China Southern Airlines. Most of the carriers are Boeing 737-800 airliners. It usually takes about 3 hours for a non-stop flight, and all the flights arrive/ depart at Terminal 2 of Guilin Liangjiang Airport, due to the temporary maintaining process in Terminal 1, while the flights depart/ arrive at different terminals of Beijing Capital Airport. The scheduled departing time in Beijing/Guilin is arranged in the afternoon for almost all the flights, while there is one flight departing in the morning at 8am in Guilin, and the last flight lands in Guilin/Beiing at 12:30pm. >> Check Beijing to Guilin Transfer: Flights & (Bullet) Trains

Taking a 2-3 hours' flight from Guilin to Shanghai/Shanghai to Guilin is the most convenient and time-saving way for tourists. There are 2 airports in Shanghai and one airport in Guilin (Pudong Airport & Hongqiao Airport) and one Airport in Guilin (Guilin Liangjiang Airport), and many flights are arranged and ready to take off, altogether 8 (non-stop) departing flights each day in busy months (May ~ Oct) operated by Shanghai Airlines, Air China, China Eastern Airlines and China Southern Airlines. >> Check Shanghai to Guilin Transfer: Flights & (Bullet) Trains.

There are multiple Xian Guilin flights running every day in every season between the two cities. For the long geological distance between them, it takes over 10 hours for trains. However, with the duration of 2 hours, you can land at Xian Xianyang Airport from Guilin Liangjiang Airport, served by the carries, China Southern Airlines, Beijing Capital Airlines, Shandong Airlines, and Air China.>> Check Xian to Guilin Transfer: Flights & (Bullet) Trains.

There are still some flights departing from Chengdu to Guilin every day operated by Shandong Airlines and Air China, though the number is not as great as the train's, and the carries are Airbus A321 and Boeing 737-800. It usually takes about 2 hours for a non-stop flight. All the flights arrive/depart at Terminal 2 of Guilin Liangjiang Airport. Similarly, almost all the flights depart/arrive at Terminal 2 of Chengdu Shuangliu Airport in the morning/evening. The followings are 4 recommended Chengdu Guilin flights for your reference.>> Check Chengdu to Guilin Transfer: Flights & (Bullet) Trains

China Express Airlines offer you a couple of direct flights between Chongqing and Guilin with 1.5-hour duration. The flight in Chongqing departS really early, around 6am. Travelling from Guilin to Chongqing, you can take the flight departing at 1pm from Chongqing Jiangbei Airport and arrive at Guilin Liangjiang Airport at 2:35pm.

Nanning and Guilin are located in the same province. There are multiple bullets trains running between the two city with a few flights taking off every other day with 1-hour duration at Nanning Wuxu Airport operated by China Southern Airlines.

Xiamen and Guilin are both located in the very south of China, there are about 8 non-stop flights running between the two cities with 2-hour duration, operated by Shangdong Airlines and Xianmen Airlines. The serving airports are Guilin Liangjiang Airport and Xiamen Gaoqi Airport.

Kuming is an important tourist city located in the southwest of China.The serving airports are Guilin Liangjiang Airport and Kuming Changshui Airport. There are a few flights running in the afternoon/evening, operated by China Southern Airlines and China Eastern Airlines with 2-hour duration.

Fuzhou is the capital city of Fujian, located in the south edge of China mainland. There are about 6 flights running between the two cities, scheduled in the early morning till the midnight. The duration is within 2 hours served by Xiamen Airlines and Fuzhou Airline, operated at Fuzhou Changle Airport and Guilin Liangjiang Airport.

Known as a world famous picturesque fairyland, Guilin attracts millions of visitors to come every year all over the world. Beside the mainland China, the abutting Asian countries/regions such as Hong Kong, Taiwan, Korea, Thailand, Malaysia, etc are also connected to Guilin by multiple airlines, and there are even nonstop flights arranged in some of the international cities such as Hong Kong, Taipei, Seoul, and Kuala Lumpur. Most of the airports in the following cities have over 20 connecting flights provided every day, which makes Guilin accessible within one day.

There are over 20 connecting flights serving between Guilin and Hong Kong every day with 1 nonstop flight on Monday, Thursday and Friday operated by Cathay Pacific Airlines. It only needs less than 2 hours for you to reach Guilin from Hong Kong. Most of the connecting flights transfer at Shanghai Pudong Airport with the duration from 7 hours to 1day. The following schedules are for your references. To inquire more about flights schedules, please don’t hesitate to contact us!

By Taxi: Passengers can take a taxi to the city center within 1 hour, costing about CNY 100.

By Metro: In 2017, the Metro Line 1 was officially handed to the construction companies. It is scheduled to open for the public by 2020, connecting Guilin Station and Liangjiang Airport, with a total of 6 stations, and will become the first metro line in Guilin.

China Discovery provides you worryfree private tour packages which covers sightseeing, dining, tour guide and transportation in Guilin. The tour guide and driver will pick you up at airport, railway station to your Hotel, and escort you all the way to focus on sightseeing and save your time on complicated local transfer. If you have more questions about transportation, please free to contact us and our experienced travel consultants are always ready to help! 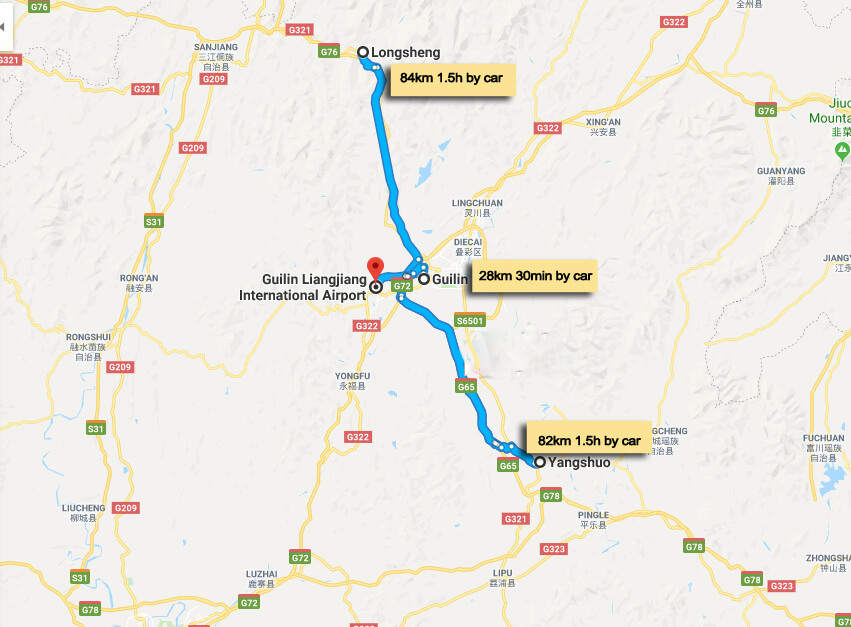 The following are some recommended hotels near Guilin Liangjiang airport for your reference: 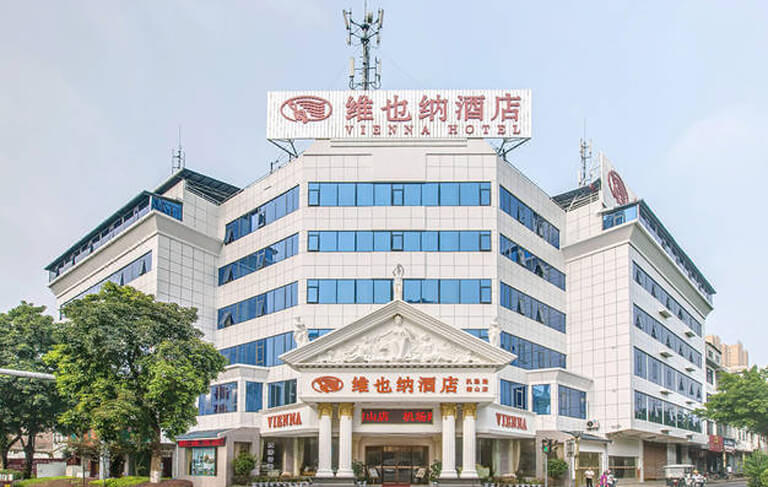 1. When to Book Flight Ticket to Guilin?

Nearly all connected cities only have 1 daily flight to Guilin. It’s difficult to book tickets, especially during high seasons. Thus, you are highly suggested to book ticket as early as possible once your travel schedule is finalized.

2. Which City to Departure from?

3. How to Collect (Receive) Flight Ticket?

Most flight tickets are booked online, so firstly you will receive an e-ticket. You will change a paper ticket when you checking in your flight at a counter in the airport.

5. Do kids have discounted flight ticket?