Guangzhou is located in Guangdong Province, the south of China while Beijing is in the north. They are more than 2000km away and have developed their own distinctive culture, language, cuisine, and living habits in several thousand years’ history. Want to take a trip to these two cities? Here we have illustrated how to travel from Guangzhou to Beijing, including the reasons, transportation means, and recommended travel plans. 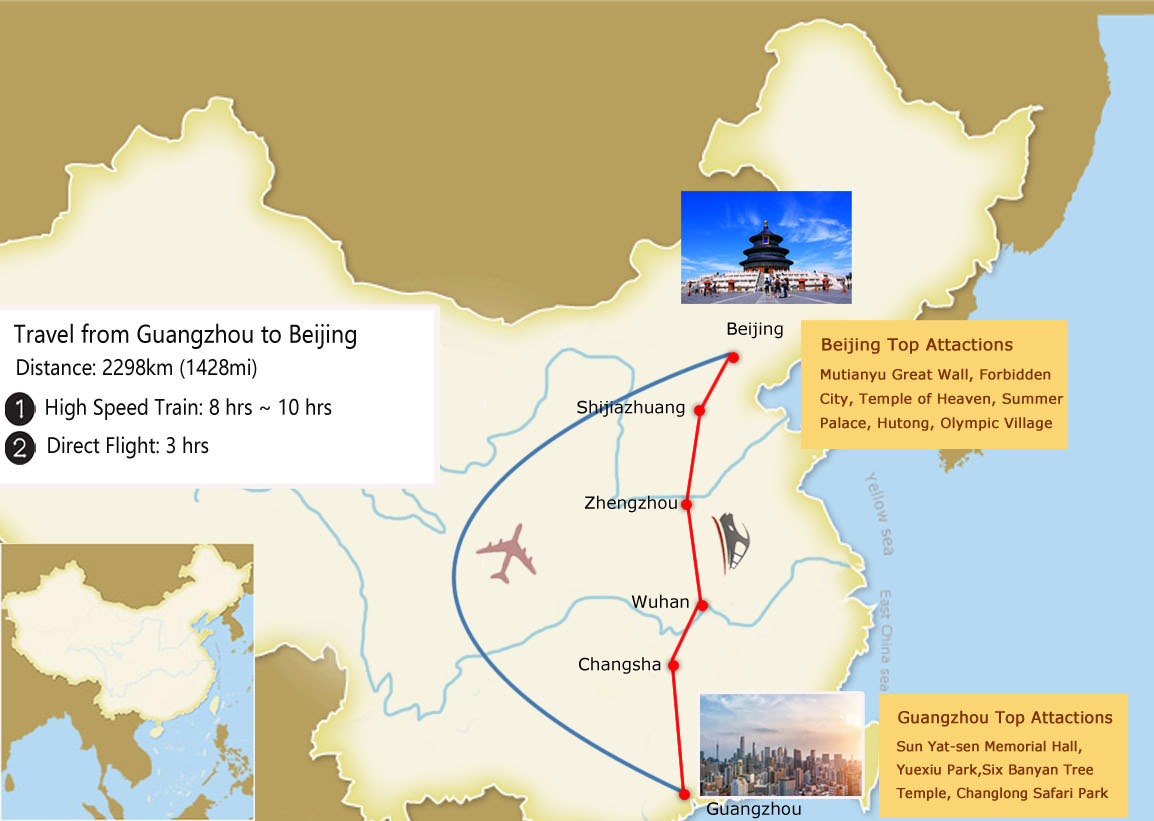 Why Travel from Guangzhou to Beijing

1. Find out the Present & Past of China in Guangzhou and Beijing

Guangzhou is always described as modern, vital, or energetic. It’s one of the best locations to feel the present China. People who come here will be amazed at the high-rise skyscrapers and rapid city development. The landmark of Guangzhou - 600m Canton Tower is the highest tower in China and the second highest in the world. Guangzhou is like a bold young man full of creative ideas and happy to try something new.

Beijing, as the capital of China for several centuries, there are many historic sites which will show you the past of China, such as the splendid Forbidden City, magnificent Great Wall, pleasant Summer Palace, solemn Temple of Heaven, etc. Every one of them has so much to see and so many stories to tell.

2. Convenient Transfer Between Guangzhou and Beijing

As the southern gate to mainland China, Guangzhou has always been an important transportation hub. It’s very convenient to get to Guangzhou from other countries such as the UK, America, Canada, Japan, Australia, Malaysia, and Singapore. After a Guangzhou tour, there are more than 30 daily flights and a dozen of trains for your choice to get to Beijing.

3. Experience the Charm of Language in Guangzhou and Beijing

Language is one of the most amazing products of human being’s wisdom. When we talk about Chinese, it usually refers to mandarin Chinese. However, in Guangzhou, local people are more used to speaking Cantonese. They have their own songs, TV plays, operas in Cantonese and they are much different from mandarin Chinese. So if there are two people from Guangzhou and Beijing who can only speak their local languages, they basically can not understand each other. Maybe you can try to learn some simple words from Guangzhou and Beijing people and see if you can find the difference between them.

4. Try Delicious Snacks and Specialties of Guangzhou and Beijing

Guangzhou people have a tradition of having morning tea. However, it’s not just about drinking tea. There is a large selection of snacks or dim sum such as egg tart, double-skin milk, rice rolls, shrimp dumplings, Hefen noodles, and all kinds of porridge and soup. Canton cuisine is one of China’s eight major cuisines. While in Beijing, you can have a taste of the roasted Duck, Cooked Beef or Sheep Tripe, Fried Liver, Lǘdagunr, Yellow Pea Cake, and countless street food. Just be ready for the treat! 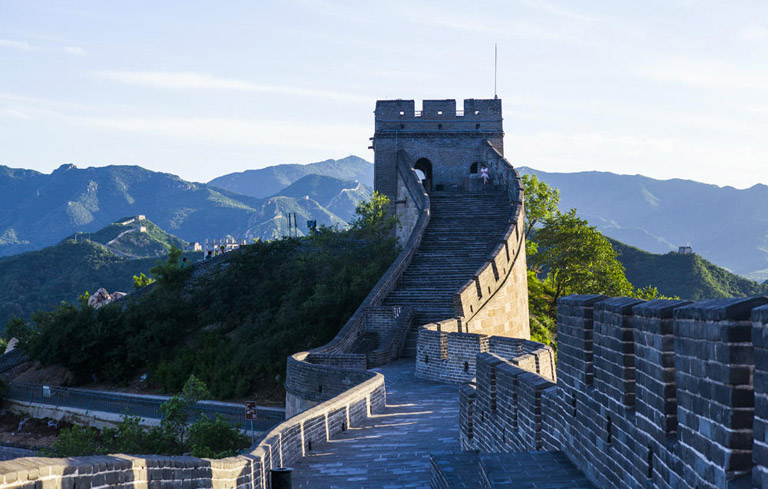 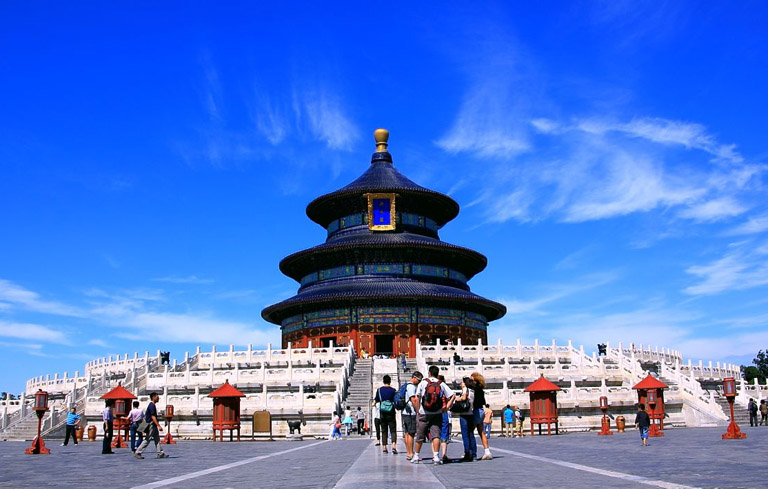 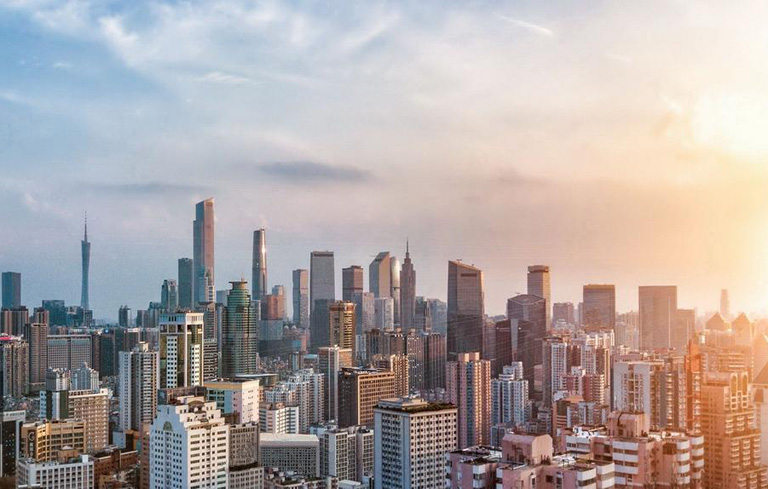 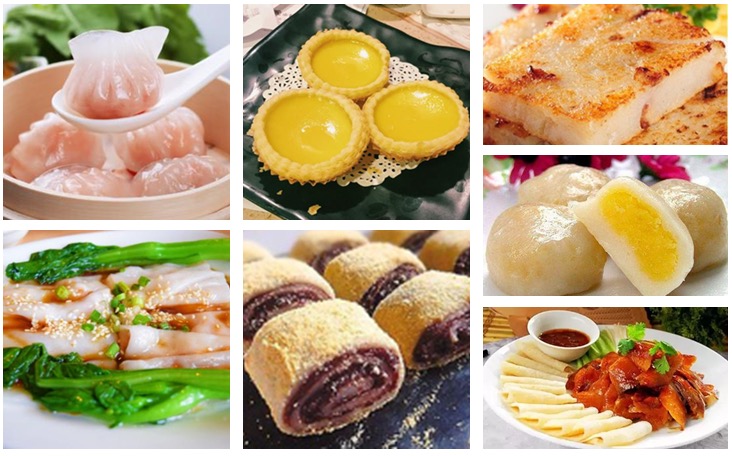 How to Get to Beijing from Guangzhou

At present, there are normally 2 ways to get to Beijing from Guangzhou. Taking a flight is undoubtedly the fastest and only takes about 3 hours. If you book your plane ticket in advance, there is usually a chance to get a discount, so the money you need to cost depends. Taking a train will need about 8 ~ 30 hours depending on the train type you choose. The 8-hour G trains are recommended because they are fast, comfortable, punctual and you can enjoy the view along the way.

Flights to Beijing from Guangzhou

From 07:00 in the morning to 23:00 at night, there are more than 30 nonstop flights from Guangzhou Baiyun International Airport to Beijing Capital International Airport. You can transfer between these two cities in about 3 hours. Here are some selected flights for your reference. As the schedule and price are not fixed, please contact us for specific flight information and ticket price.

Location: North of Guangzhou City, about 35km away from downtown (广州市白云区人和镇和花都区新华街道、花东镇交界处)

To Sun Yat-sen Memorial Hall (downtown): 1 hour by car or subway, you can take subway Line 3 then transfer to Line 2.

To Yuexiu Park: 50 minutes from the airport, only 1km at the north of Sun Yat-sen Memorial Hall.

To Six Banyan Tree Temple: about 1 hour from the airport, only 15 minutes’ walk from Sun Yat-sen Memorial Hall. 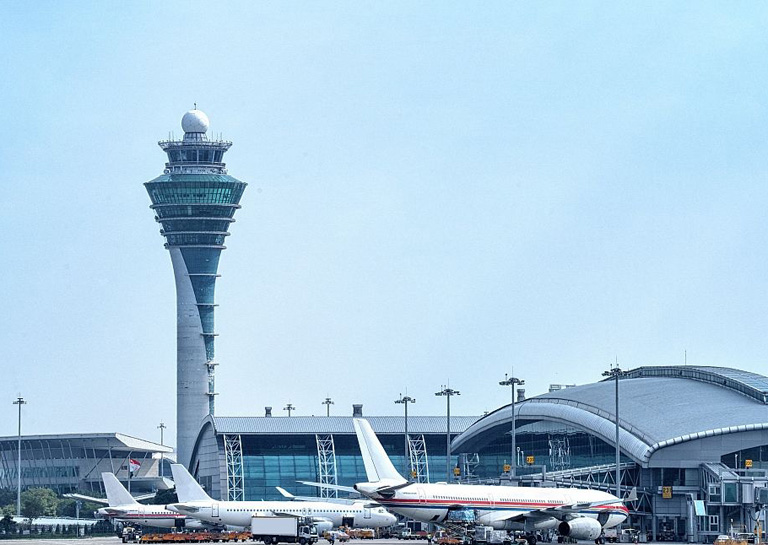 To Forbidden City: 1 hour’s drive, or take an airport shuttle bus to Dongzhimen Station and take subway Line 2 to Jianguomen then transfer to Line 1 which takes about 1.5 hours.

To Tian’anmen Square (downtown): 1 hour’s drive, or take an airport shuttle bus to Dongzhimen Station and take subway Line 2 to Qianmen Station which takes about 75 minutes.

To Temple of Heaven: 1 hour’s drive, or take an airport shuttle bus to Dongzhimen Station and take subway Line 2 to Chongwenmen then transfer to Line 5 which takes about 80 minutes. 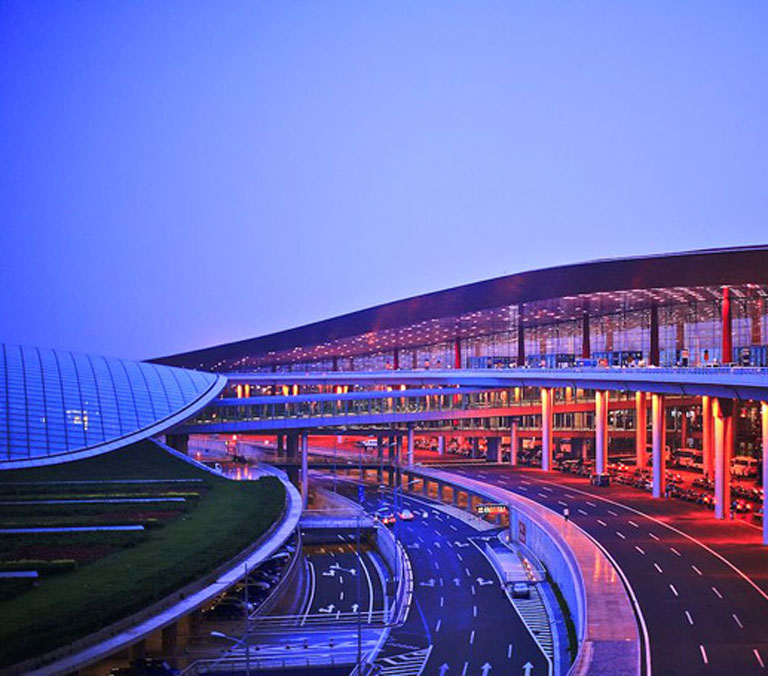 Trains to Beijing from Guangzhou

To Sun Yat-sen Memorial Hall (downtown): only about 2km, 10 minutes by car and 30 minutes on foot. 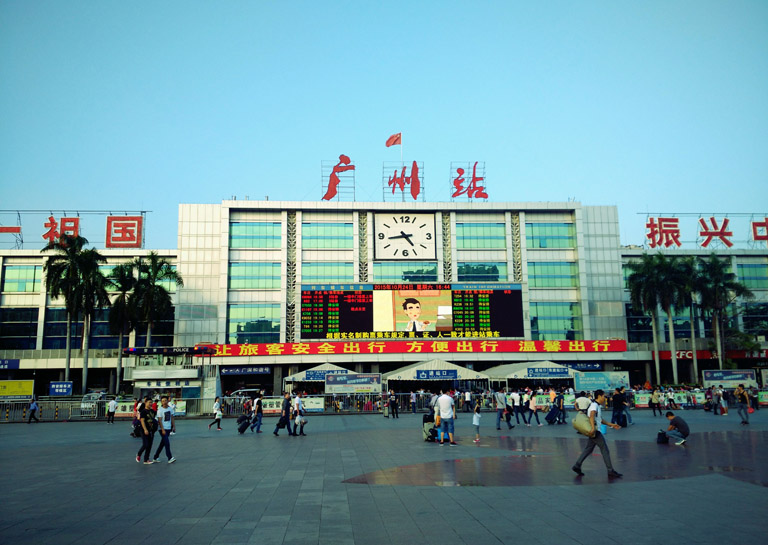 Guangzhou South Railway Station started its construction in December 2004 and was put into operation in January 2010. This large modern railway passenger station is the largest and busiest high-speed railway station in South China. It is the core railway station in the Dawan District of Guangdong-Hong Kong-Macao and the Pan-Pearl River Delta Region. It is a world-class transportation hub that connects Beijing-Guangzhou High Speed Railway, Guangzhou-Shenzhen-Hong Kong High Speed Railway, Guizhou-Guangzhou High Speed Railway, Nanning-Guangzhou Railway, Guangzhou-Zhuhai Intercity Railway and the coastal railway of Western Guangdong and many major cities in China like Beijing, Shanghai, Wuhan, Hong Kong, etc.

To Sun Yat-sen Memorial Hall (downtown): about 40 minutes by car or by subway Line 2.

To Yuexiu Park: 55 minutes’ drive, or take subway Line 2 which will need about 50 minutes.

To Six Banyan Tree Temple: 50 minutes’ drive, or take subway Line 2 which will need about 45 minutes. 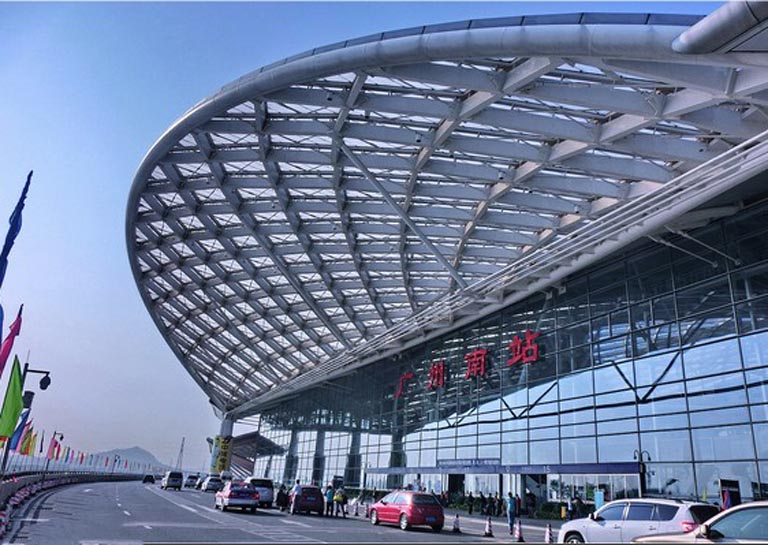 To Forbidden City: 30 minutes’ drive, or take subway Line 9 then transfer to Line 1 which takes about 45 minutes.

To Temple of Heaven: 30 minutes by driving or taking subway Line 7 How to Travel from Guangzhou to Beijing

Guangzhou is the capital of Guangdong Province. When you plan a Guangzhou tour, you can start with the Sun Yat-sen Memorial Hall. It was built during 1929~1931 in memory of the great revolutionist Sun Yat-sen who is also honored as “the Father of China”. Then spend some leisure time at the Yuexiu Park nearby. It is the largest park in downtown Guangzhou where you can enjoy stunning mountain views, beautiful lakes and well equipped entertaining facilities. The Five-Ram Sculpture in the park is the emblem of the city, which is a must-see. Then move on to the Six Banyan Tree Temple, a Buddhism temple of more than 1400 years’ history. There is a 57-meter high pagoda, several lovely Buddhist shrines, and many statues. After that, make a visit to the Ancestral Temple of the Chen Family, a typical Qing Dynasty (A.D. 1616 - 1912) architecture. It is a great place to appreciate the traditional Chinese architecture. If you are traveling with kids, the amazing Changlong Safari Park definitely can’t be missed. You and your kids are going to love the beautiful giraffes, Chinese Giant Panda, Australian Koala, Thai Asian Elephant, etc. With convenient transportation, you can also add another day to Shenzhen to see the famous Window of the World and have a comprehensive understanding of this city in Shenzhen Museum. 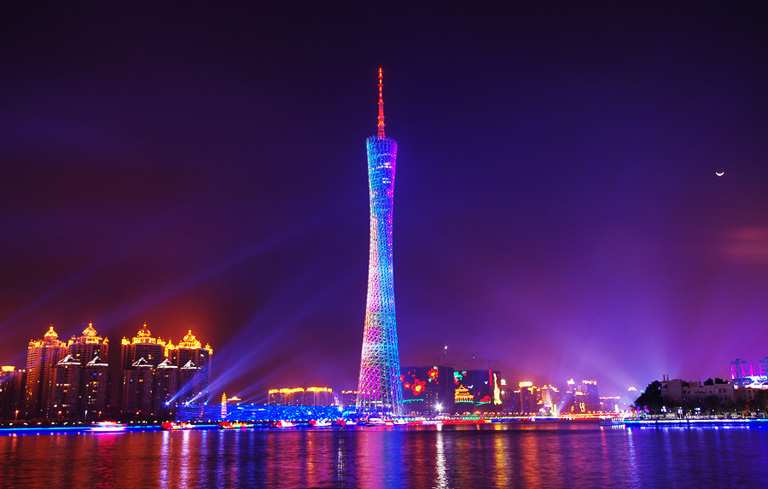 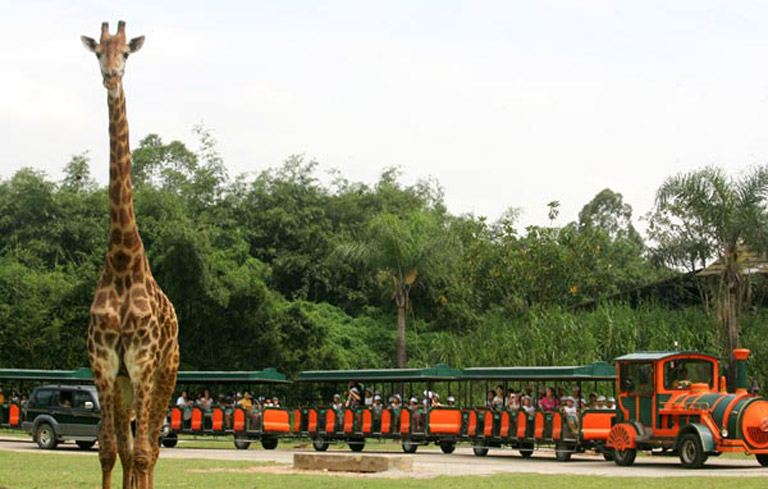 With the convenient 144 Hours Visa-free for Transit in Beijing, you will have enough time to explore the best highlights of Beijing in many flexible ways. You can start your Beijing trip by visiting Tiananmen Square, now the largest city plaza in the world, and then go to see one of the world’s five most important palaces – the Forbidden City. After lunch, spend an enjoyable time in the Summer Palace. It is the largest and best-preserved royal garden in China. At night, you can watch a wonderful Kungfu Show in the Red Theater or enjoy the classic Chinese art performance of Beijing Opera at Liyuan Theater. On the next day, get ready to a take a hiking trip on the Great Wall, one of the Seven Wonders of the World. Then continue your trip to Sacred Way, a 7-kilometer-long passage leading to the Imperial Tombs of 13 Emperors of Ming Dynasty. After that, on your way back to Beijing, you can stop by at the Beijing Olympic Village to view its famous Bird’s Nest and Water Cube. On the last day, pay a visit to the Temple of Heaven, originally a site used to pay homage to Heaven and pray for good harvests. Then get back to the central city to hop on a rickshaw to experience the typical Beijing Hutongs. If you have more days, you can go for an in-depth Great Wall hiking or photography tour, and explore more hidden attractions in the city. 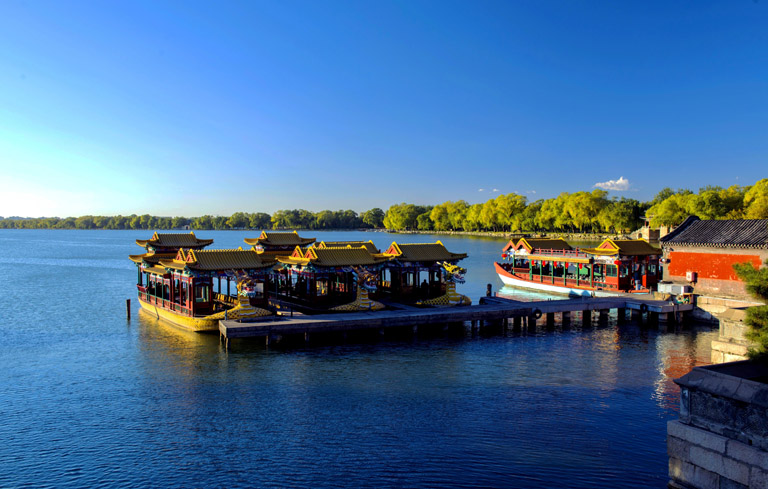 If you have other ideas or questions about a Guangzhou Beijing Tour, please feel free to contact us. We are also specialized in tailor-made tours that fit you best according to your own interests, requirements, traveling time, etc. We will provide you with reliable drivers, professional guides and comfortable vehicles. You don’t need to worry about the tickets, meals, accommodation or any other problem; all you need to do is just enjoying your trip!