Zuojiang Huashan Rock Art Cultural Landscape is an extensive assembly of historical rock art that was painted on cliffs in Guangxi, China over several hundred years at least. The paintings are mainly located on the west bank of the Ming River, and it is around 6621 hectares. On July 15, 2016, Zuojiang Huashan Rock Art Cultural Landscape was listed as a World Heritage Site, and has become the 49th World Heritage Site in China.

Zuojiang Huashan Rock Art is about 546 kilometers from the picturesque Guilin. Entitled as the largest rock Art cliff in China, Huashan Mountain cliff stands 345 meters (1132ft) above sea level and looks out over the Ming River. The 221-meter-long (725ft), 140-meter-high (459ft) cliffs bear 1,900 discrete images arranged in about 110 groups in total. The main painted area along the cliff has a width of about 170 meters (558ft) and a height of about 40 meters (131ft).

For many years, Huashan Rock Art has stayed untouched, erectly standing upright on the riverbed, which make itself too steep for climbing, and the paintings are located 30 meters (98ft) to 90 meters (295ft) above the river's water level. The torrent below faithfully guards them from the mortals.

It is believed by scholars that an ancient group called Luoyue created Huashan rock paintings between 1600 and 2400 years ago by different researchers. Many of the paintings are authentic art works related to "the living conditions and religion rituals" of the ancient Luoyue people, who are believed to be ancestors of Zhuang people (a minority group in China).

The spectacular cliff murals, the mystical cultural background of ancient Luoyue people, and the important archaeological value with a myriad of unsolved puzzles attract visitors, experts and scholars to experience the magnificent view of Zuojiang Huashan Rock Art Landscape.

The carbon-14 dating method implies that the Huashan Rock Art paintings were created 1,680 to 4,200 years ago. Subsequently, It underwent continuous improvement from the Warring States Period (475BC - 221BC) to the Han Dynasty (25AD - 220AD) until this amazing masterpiece eventually came into being. The geographical components of Zuojiang Huashan are relatively complete, which preserves the cliffs, rivers, and the forest. Even after thousands of years of geological forces, the color of many long-exposed rock paintings are still well-remained incredibly.

38 rock art sites were selected as the best preserved pictographs which suffered from neither development nor neglect. Containing all the elements necessary to convey the value of the cultural landscape and rock art, on July 15, 2016, it was added on in Istanbul, Turkey.

Many scholars and visitors may wonder what kind of pigments the ancient Luoyue people have used to paint the cliff murals which can endure for over two thousand years and are still well-preserved. After having an element check-up, it is reported from the relevant experts that the main component of the pigment is a natural mineral material - hematite. The expert also found out other adhesive ingredients which were detected as a kind of animal glue. Some also said that the paintings may also contain animal's or human's blood due to the sacrificial scene the murals have conveyed.

Having been painted by flat molding, all the cliff mural figures are the monochromatic patterns. They include images of bronze drums, knives, swords, sheep, dogs and beasts, but the most predominant feature of Huashan Rock Art paintings is their 1,300 human figures. The main body of the picture consists of many similar crude human figures. The biggest one is 3 meters (10ft) tall, and the smallest is only 20 centimeters (8in) in height.

Each group of figures includes a giant leader standing at the center, wearing a tiger cap with swords buckled to his side. He stands solemnly on a frog-like beast. These figures are numerous. Some are semi-dressed, while others are naked. Masses of smaller figures beat bronze drums, and paddle canoes, gathering by the riverside around their leaders.

Most of the human figures on the paintings are stretching out their arms on both sides, and their elbows bent upwards, in a half squatting way. They appear to be imitating frog postures. Frog worship was indeed an ancient Zhuang tradition, and the frog dance still exists. Bronze drums also appear in the paintings. Certain human figures have clear gender and age differences, including male and female, pregnant women and groups of children. Some believe that they reflect the fertility worship of the ancient Luoyue people. 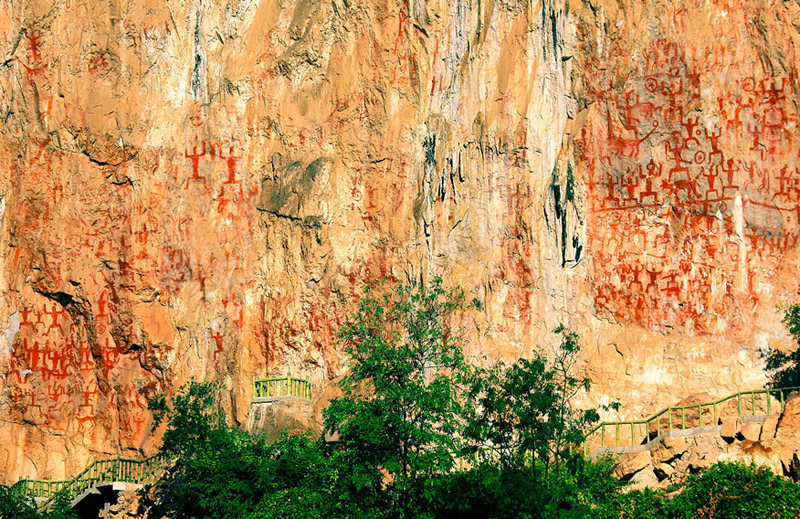 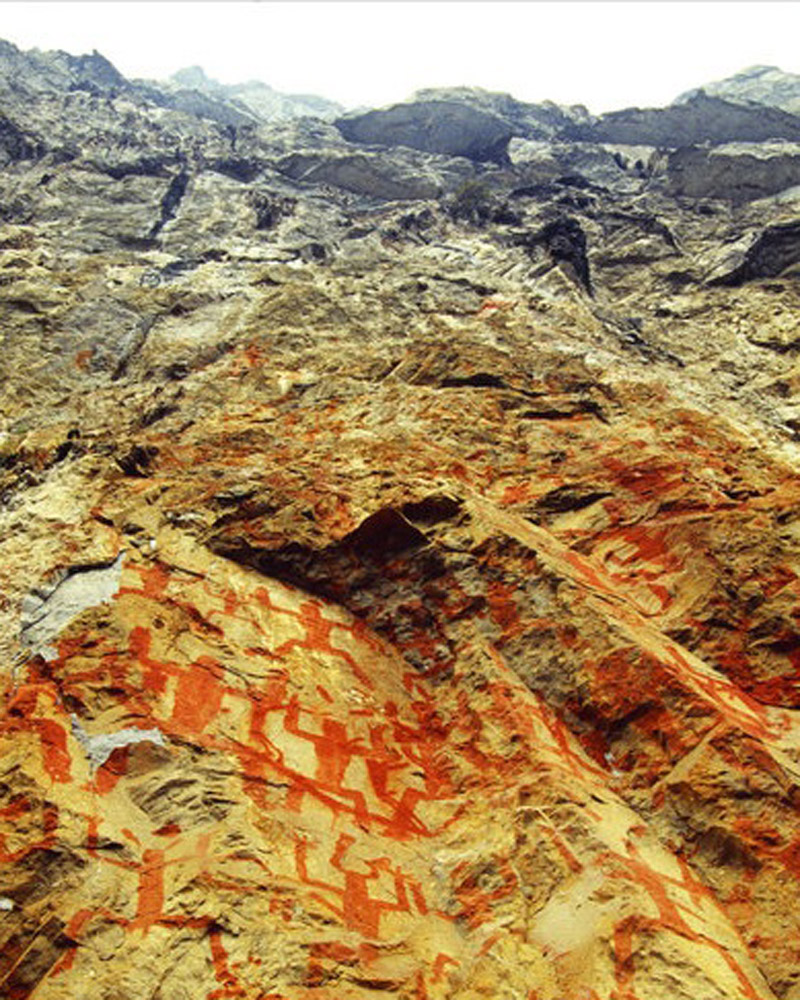 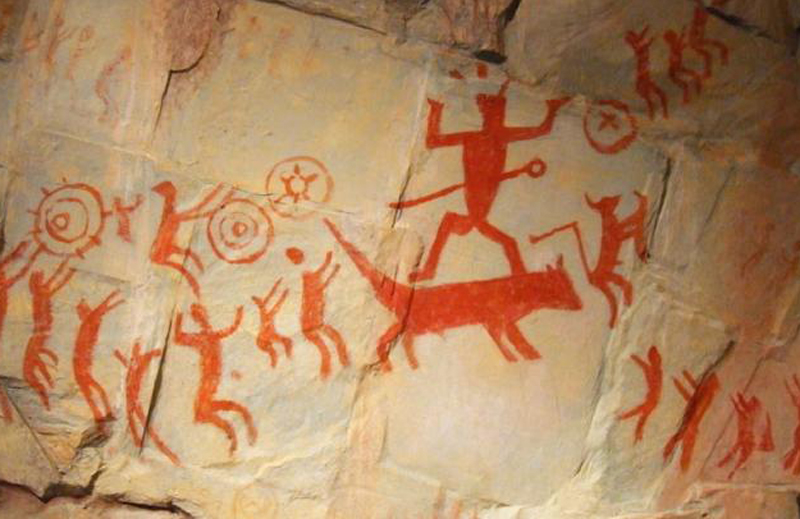 Why is Huashan Rock Art Important?

The rock painting corridor in the Zuojiang river basin with the Huashan Mountain rock paintings at its core is rare not only in China but also the world by virtue of the wide distribution of these difficultly executed but magnificent paintings. With profound artistic connotations, no matter what kind of scenes the paintings describe, they reflect scenes from the life of the ancient Luoyue people. They also express the people's respect for heroes and eulogizing of power, as well as their good wishes for prosperity and favorable weather. The rock paintings not only show us the artistic achievements of the ancient Luoyue people, but also the richness of their social life millennia ago, and their diligence, courage and tenacity.

Archeologists believe that it was painted before the Spring and Autumn Period (770 BC-476 BC) and Warring States Period (475 BC-221BC), more than 2,000 years ago. It took over 700 years to finish, and in the process Luoyue artists used up the best part of their state-owned assets and manpower. As they made such huge efforts to complete this masterpiece, it was executed with clear goals in mind, namely, to hand down the rock paintings through the ages.

For centuries, the rare and artistic rock paintings of Huashan Rock Art have drawn Chinese and foreign experts to do research that might solve the riddle of the paintings, and to wonder at their inestimable archeological value. However, they remain a tangle of paradoxes composing an impenetrable enigmas: How did the Luoyue people paint images on these towering and precipitous cliffs 2,000 years ago, with such rudimentary equipment? And why did they risk their lives to do so? What pigments did the artists use to keep the paintings red and clear even after being exposed in wind, rain and sunlight over millennia? What significance did the various mysterious pictures convey? How did the Zhuang ancestors paint at such a high height? These are just a few of the numerous unsolved puzzles. A lot mysteries still linger. 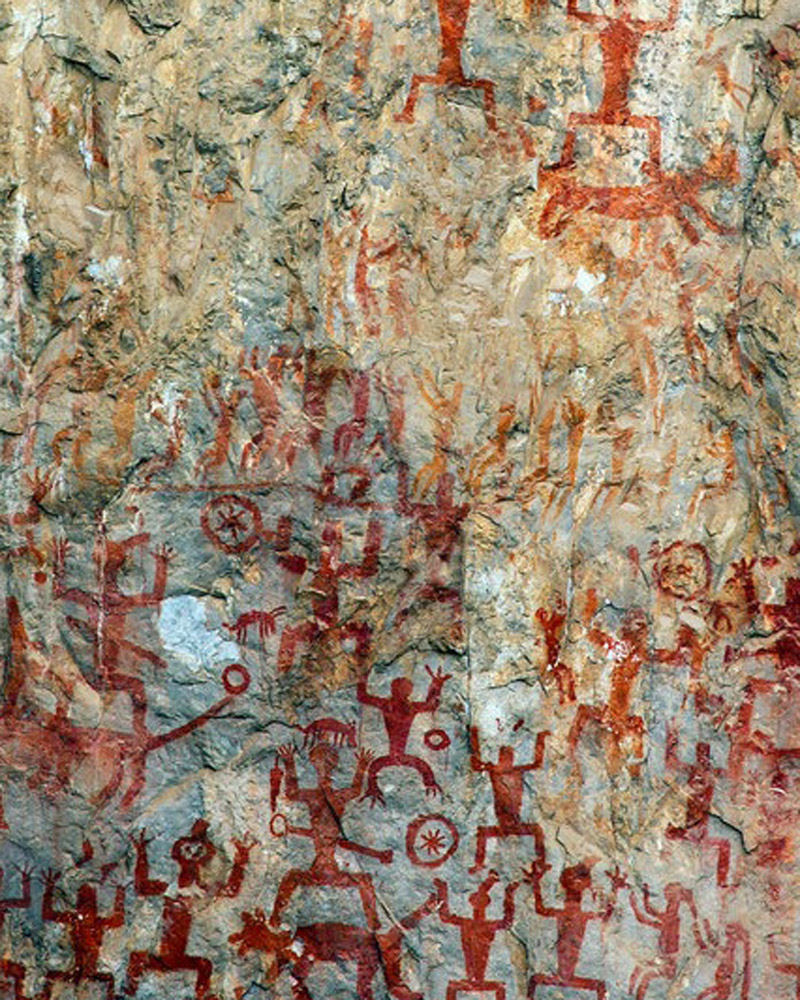 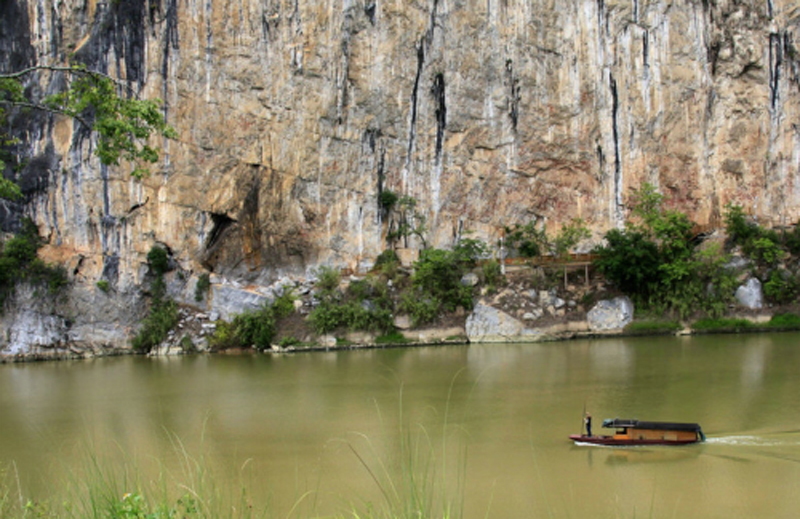 Things to Do at Huashan Rock Art

Visitors at Huashan scenic area usually will take a boat to have a better and closer view of the ancient murals. If you have missed the cruise on Li River, the Ming River cruise may be a good choice, for both of them are located in the same province. While Ming river is the downstream of Li River, it’s not as that well-known as the former one, which also identify itself an untouched mysterious attraction. Huashan scenic area is an adventurous virgin land where you can still experience the hospitality of the local people and the primitive villages which dwelled since the ancient Luoyue had moved here. However, the same spectacular karst formation view is unchanged comparing with Guilin since the same topograpy has conceived both of them. Also, with less tourists, the cruise boat allows visitors having a comfortable zone and particular angle wherever they want for photography taking.

The mural figures on the cliffs are in scarlet, outstanding among the emerald mountains, and from a distance look like a mystical tattoo of these stalwart cliffs. A close-up of the cliffs, you will be impressed by the group of numerous thickly dotted figures, which may embody an animated ceremony or a religion ritual in the ancient time.

There are also primitive villages where locals still hold rituals related to the rock art, virgin forests inhabiting various plants and animal species, and long rivers winding through the magnificent mountains. The fascinating karst topography of the area resembles that of Guilin, which is also located in Guangxi.

The typical karst formation and the affluent cultural heritages the cliff murals have conveyed provide an irreplaceable shooting sites for momentous pictures in life or prize-winning picture for documentaries and research reports. Whichever reasons you may come here for, you can always get nice pictures, either a close-up of the scarlet cliff murals or a panorama of the picturesque karst landscape.

After the exciting Ming river cruise and your eyes are feasted with all kind of natural or cultural treasures, your curiosity is growing about the unsolved puzzles of the rock art paintings. You are recommended to go to Huashan Rock Art Museum to get a deeper academic knowledge resources about the rock art paintings and Luoyue people, which is located in Chongzuo city where you can reach by train within half an hour.

An exhibition in the Zhuang Nationality Museum in the City of Chongzuo (崇左市壮族博物馆) is dedicated to the history of the paintings. 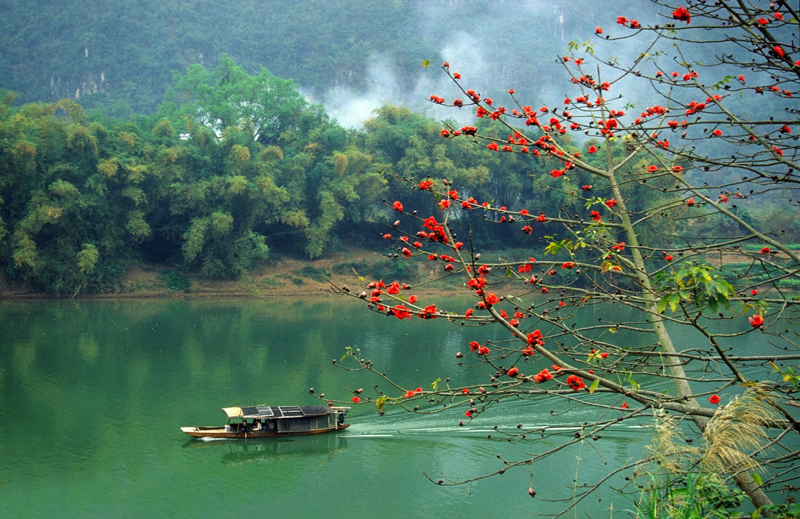 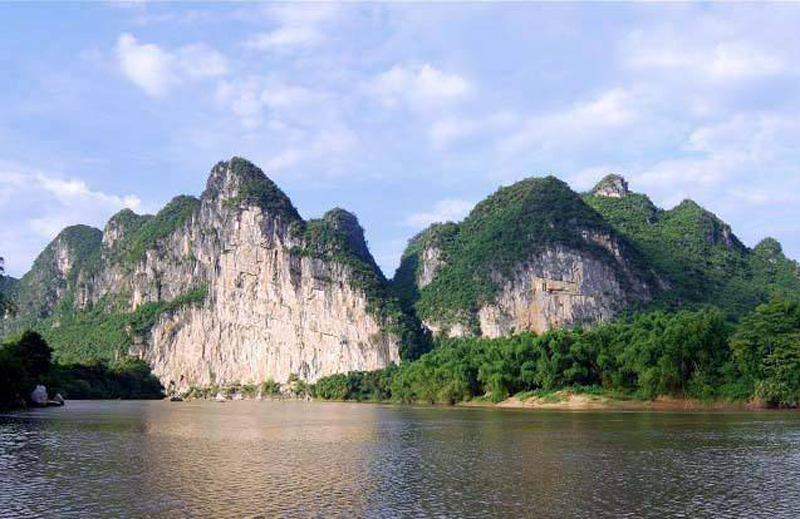 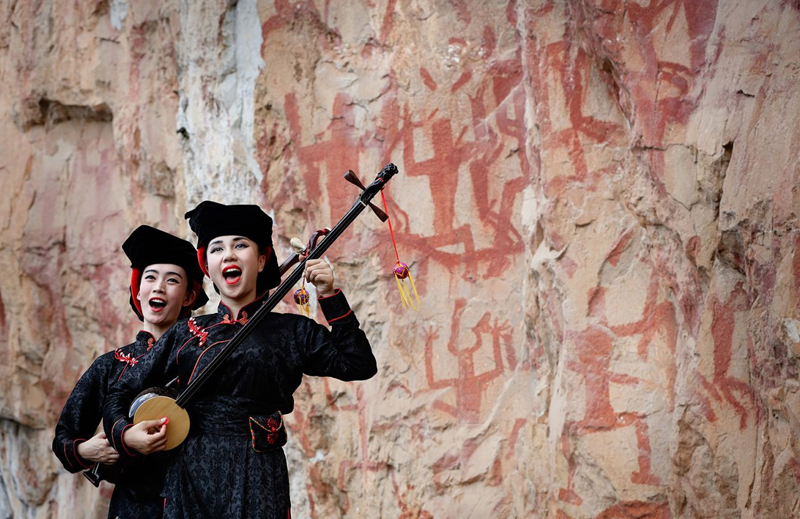 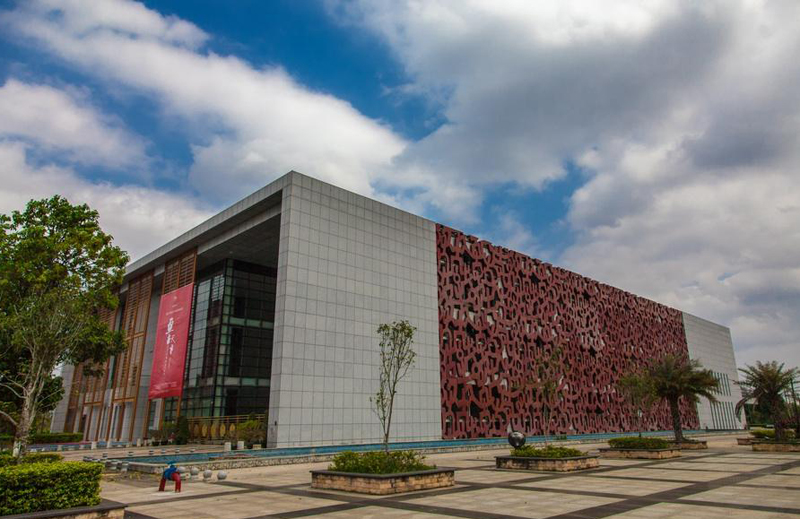 Location and How to Get to Huashan Rock Art Scenic Area

Huashan Rock Art Scenic Area is located in Ningming county, the southwest of Guangxi Zhuang Autonomous Region, 180km to the capital city, Nanning (3hours by car) and 564km to the famous scenic city, Guilin (7 hours by car). Since there is no bus or train which can access Ningming county directly, travellers from Guilin may need transfer at Nanning station.

Take a bus from Jiangnan Bus Station (江南客运站) to Ningming

Take a train from Nanning Railway Station to Ningming

From the train or bus station, there are pedicabs (CNY 30 to CNY 50, 40 minutes) trundling to Tuolongqiao Dock (驮龙桥码头). All the visitors need to take a boat at the dock(驮龙桥码头) to reach Huashan cliffs by the river which bear the murals.

There are only 2 cruise boats owned by the cruise companies offering the round-trip journey. The cruise boat departs at 12:30pm and 15:30pm, and the duration of each cruise is usually 2.5 hours. Outside these times, you can hire a private boat.

If you want to get rid of the hustle of public transportation and troublesome navigation, you can book a private tour package which covers sightseeing, dining and transfer from us. Our local tour guide and driver will escort you to Huashan Rock Art Scenic Area with speed and convenience, and take care of all the details. You just need to focus on sightseeing. >Contact us now

The price for chartering a private boat: CNY 200 (depending on the type of boat used).

Top 3 Guangxi tours chosen by most customers to explore Guangxi in the best way. Check the detailed itinerary, or tailor your own trip now with us.