Reed Flute Cave is a cave-based scenic spot located in the northwest suburb of Guilin, Guangxi, China, 5 km from the Guilin city center. It is about 240 meters (787ft) deep and 500 meters (1640ft) long. The cave has a great number of various exquisite stalagmites, stalactites, stone pillars and stone curtain, which have been forming since 180 million years ago. So it is also known as "the Palace of Natural Art".

Reed Fleet Cave is a spectacular cave located in Guilin City. Walking into Reed Flute Cave, you will be amazed at how radiant the dewy stalagmites look like. The rainbow lights and dazzling array of massive natural formations compose a dreamy wonderland. The underground lake peacefully flows along the cave, with the reflection of the cave veiling on the river and flowing quietly with the stream, which makes the beauty even more vivid and dynamic. The interior of Reed Flute Cave is a sight that can not be recreated anywhere else on earth and these distinctive formations have names that match their appearance, and some are said to resemble mythological creatures or modern structures like the Statue of Liberty.

While stepping out of the cave, you will find the abundant reeds that grow and thrive outside the mysterious cave, which can be used to make flutes, and that is how the cave was named. Just close your eyes and imagine yourself standing in the mist of the reeds and get refreshed, breathing the fresh air and catching the gentle whistling of the flute. Outside the cave, it's a perfect tranquil hermitage where China's "Thoreau" may live.

Despite the nature’s art masterpieces, there are 77 ink inscriptions of poems and travelogues inside the cave, which indicates its popularity during ancient time, and the oldest one can be dated back as far as the Tang Dynasty (792AD) .

However, it is widely believed that the cave sat empty and untouched for a thousand years, before its rediscovery in 1940's by a group of refugees, fleeting Japanese Troops. 20 years later, the cave was formally opened to the public (1962). Since then it has become an extraordinary popular tourist attraction with people from all over the world. Even the former Chinese government leader Deng Xiaoping, former US presidents Nixon and Carter, and former UN Secretary-General De Quillar have visited the cave.

How Was Reed Flute Cave Formed?

There are various stalagmites, stalactites, stone pillars, stone flags which have been forming since 180 million years ago. They were shaped by nature either grotesquely or vividly. These "peaks", "tree trunks" and "animals" are stalactites formed by the consistent dripping water from the top of the cave. The water containing calcium ions drips down from the cracks and crystallizes into stalactites suspending at the top of the cave over millions of years. Water drops onto the ground to form stalagmites that grow from the bottom to the top gradually forms a stone pillar. There is an old saying in China that says "the consistent water can drop through the stone". In Reed Flute Cave, on the contrary, the consistent water forms a stone. As long as there is water dropping, stalactites will keep growing. 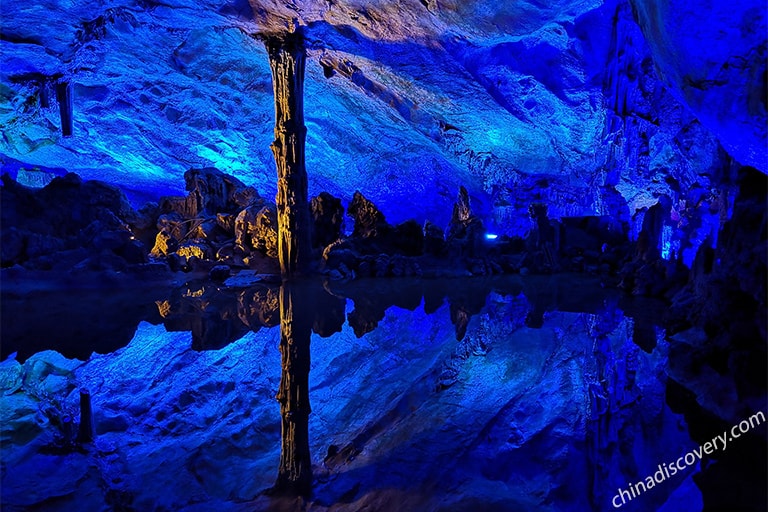 What to See in Reed Flute Cave?

Featuring a fascinating collection of stalactites, stone pillars and rock formations created by carbonate deposition, many of the formations in the cave have been compared to recognizable shapes of mythological creatures and natural images. For instance, there is a formation that looks like the Statue of Liberty and each rock has been give a poetic name by the local Chinese people.

The various stalactites are fully used for nature's metaphor: tall peaks, dense forests, and gigantic tree trunks. Every time the sun rises, there are groups of "lions" dancing heartily in the forest in front of the rising sun, making the whole forest full of vigor and vitality. Here is a big "lion" among them. It is watching over a group of little "lions" playing on the side of the mountain.

It is the widest place of Reed Flute Cave, 93 meters (305ft) wide and 18 meters (59ft) high. A huge "Crystal Palace lamp" hangs on the upper left of the hall. It paints the hall with a magical color, like the Dragon King's Crystal Palace in the Chinese myth. Walking into this hall, it is very flat, empty, and not crowded with stalactites. The flat surface, and the top rock is relatively complete, with less fissures.

It consists of two unique stalagmites. One is like a snowman. The other is like a pine tree with thick layers of snow on its branches and leaves, standing in the forest. As a Chinese saying goes, "Pines turn greener after snow", and the snowy pine tree shows its tough and hardy characters which Chinese people always admire. The "snow" here is made up of calcite crystals.

You will enjoy the magnificent panorama of a "primeval forest": there are hundreds of "pines", "evergreen cypresses". Many of these dense pillars form the most spectacular stone forest . The twin pillars in the forest are truly lofty, thick. when you have a close-up, they reveal the differences. Both of the pillars seem very tall and straight up to the sky, so people call them " Sky-Scraping Twin".

There are altogether 77 inscriptions, including five in the Tang Dynasty (618AD-907AD), eleven in the Song Dynasty (960AD-1279AD), one in the Yuan Dynasty (1271AD-1368AD), four in the Ming Dynasty (1368AD-1644AD). There are many inscriptions of poems and travelogues written by scholars, monks and tourists. You can enjoy the ancient calligraphy in different period of China. These writers came from all over the country, indicating that Reed flute cave has been a tourist attraction with a long history. The oldest inscription in Reed Flute Cave can be dated back as far as the 6th year of Zhenyuan in the Tang Dynasty (790 AD).

Some inscriptions are also evidence showing the monks have visited together, reflecting the prevalence of Buddhism in Guilin. Nowadays, they also became useful materials for studying the spread of Buddhism in the Tang Dynasty. 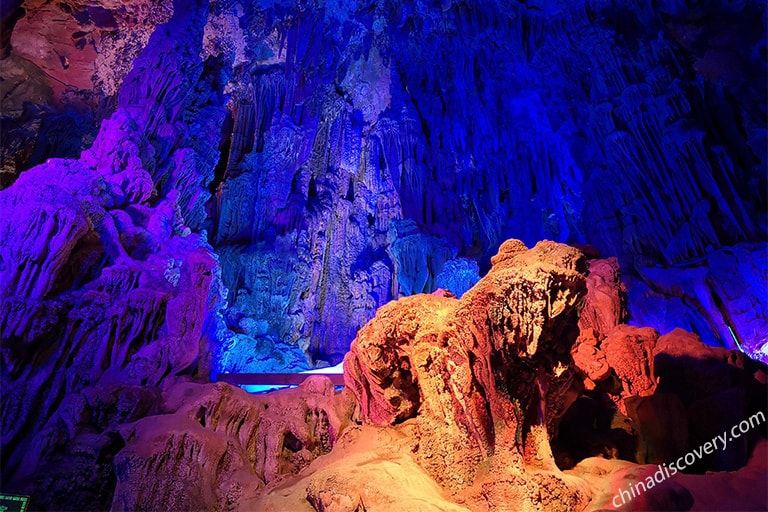 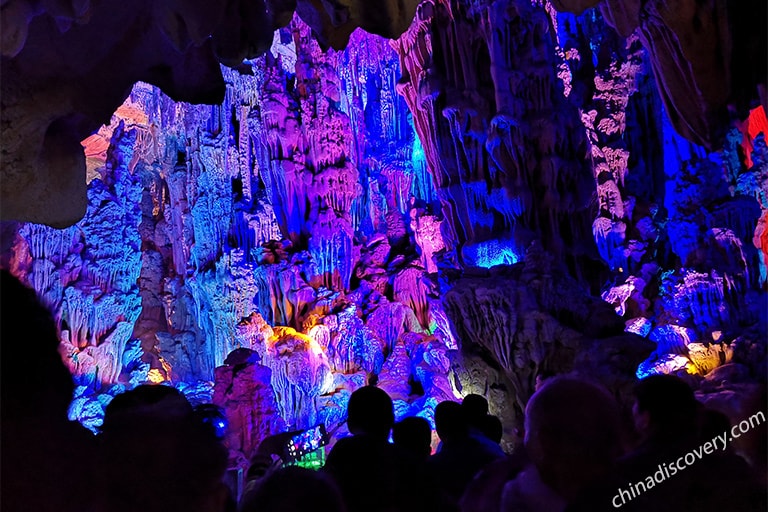 Pines in the Snow 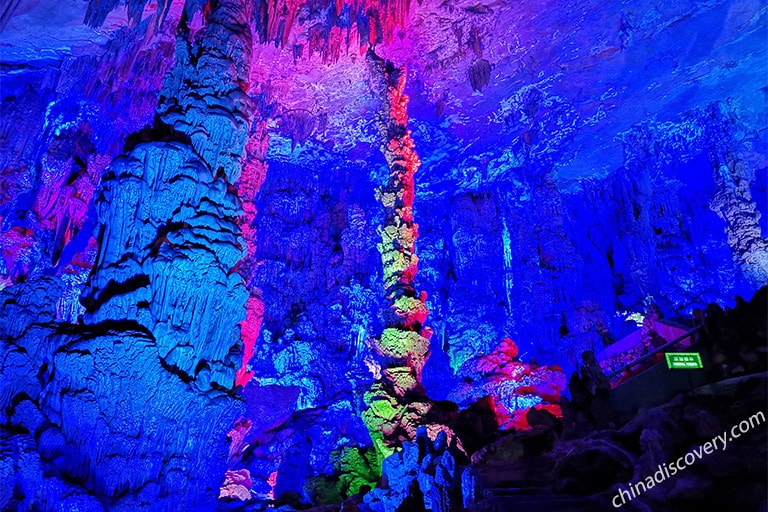 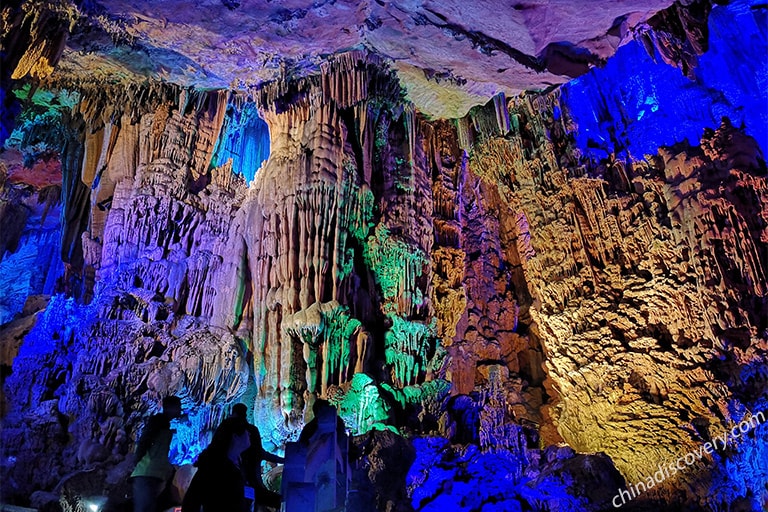 Where to Go Sightseeing outside Reed Flute Cave?

Besides the karst cave, Reed Flute scenic area also includes, Mountain Hou (Pinyin: Houshan 候山), Peach Blossom River (Pinyin: Taohuajiang 桃花江) and Flying Phoenix Bridge (Pinyin: Feiluanqiao飞鸾桥). The gurgling water mirrors the wavy mountains. All kinds of flowers, such as peach blossom and lotus flowers, are in full bloom in spring and summer, and various trees, such as pine trees and willows, clothe in green and shiver in the wind in autumn and winter. In all the seasons, it's idyllic fairyland for tourists to go sightseeing.

On the way to Reed Flute Cave, most tourists will drive along Peach Blossom River. The length of the trench is about 25 km. It is like a green ribbon covering around the basin of Guilin. The Peach Blossom River runs through limestone areas and the water is very limpid and flows gently under Flying Phoenix Bridge. On both sides of Peach Blossom River, flaming oleander flowers brightly blaze in spring and the time seems immobile for the travelers by water to capture the idyllic scenic moments.

The very first thing you will notice before entering Reed Flutes Cave area is an unsophisticated stone bridge -Flying Phoenix Bridge (Pinyin: Feiluanqiao 飞鸾桥). Located at the intersection of Peach Blossom River and Reed Flute Road, according to the county's Chronicles, it can be dated back to Song Dynasty (1228AD-1233AD) since it had been built. It has been rebuilt many times. The bridge is 62.4 meters (204.7ft) long and 10.5 meters (34.4ft) wide. The arch is encased in a cyan-black limestone. It's a great place where you can take good pictures during sunset.

It takes about 1-2 hours to truly enjoy the beauty of Reed Flute Cave and tourists usually choose to visit Reed Flute Cave with Li River, Yangsuo and Longji Rice Terraces and other attractions in Guilin. The followings are highly recommended Guilin tour packages: 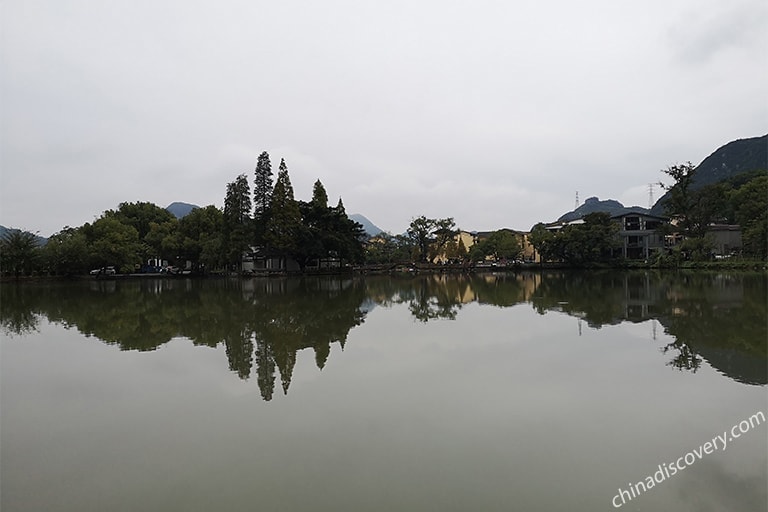 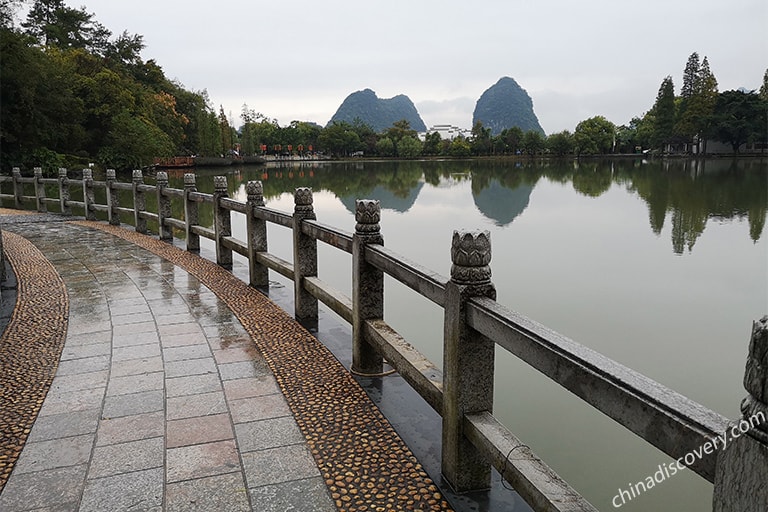 Reed Flute Cave Location & How to Get There

Located in the northwest of Guilin city, Reed Flute Cave is about 8km away from the Railway Station and 5km to the city center, which is quite convenient for tourists to visit.

If you want to get rid of hustle of public transportation and troublesome navigation, you can book a private tour package which covers sightseeing, dining and transfer from us. Our local tour guide and driver will escort you to Reed Flute Cave with speed and convenience, and take care of all the details. You just need to focus on sightseeing. >Contact us now 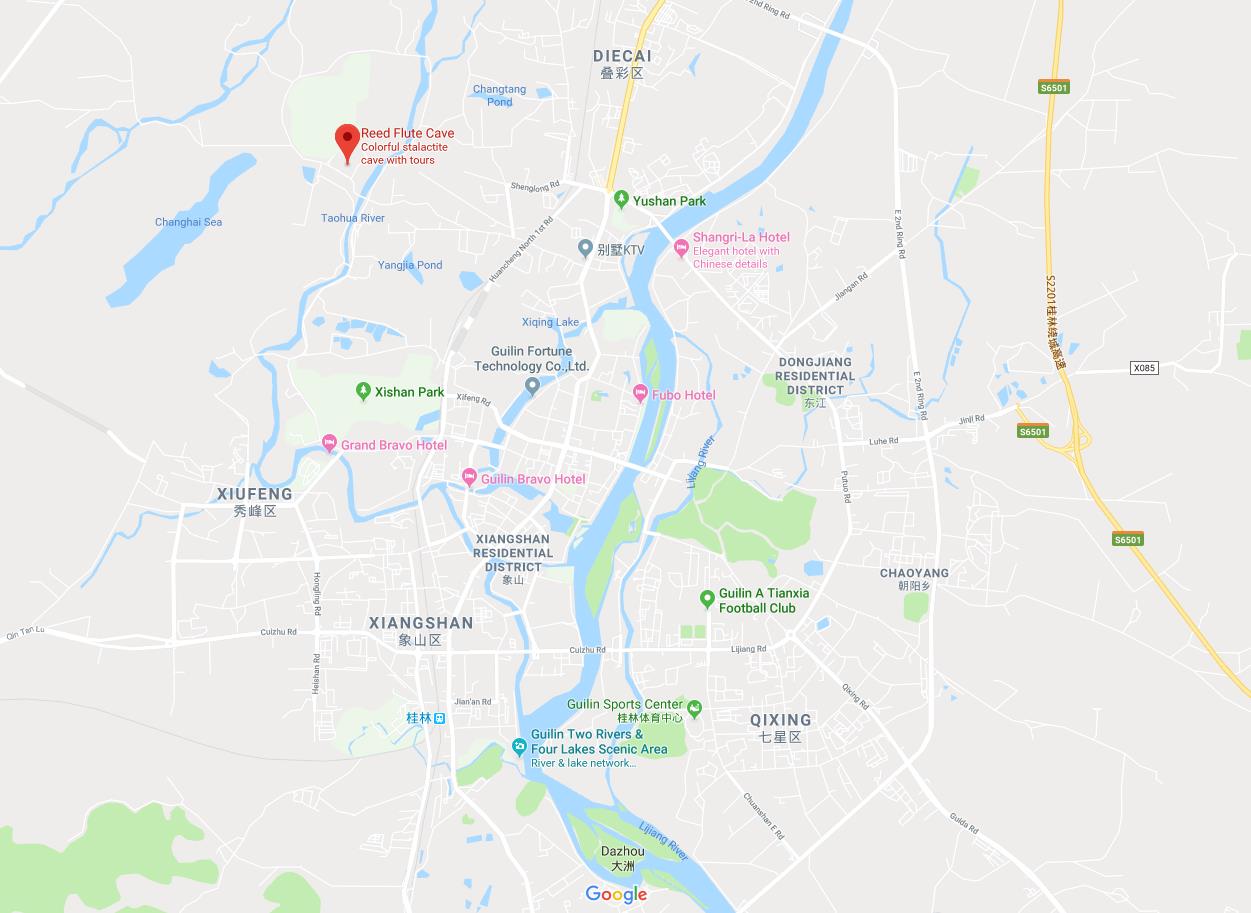 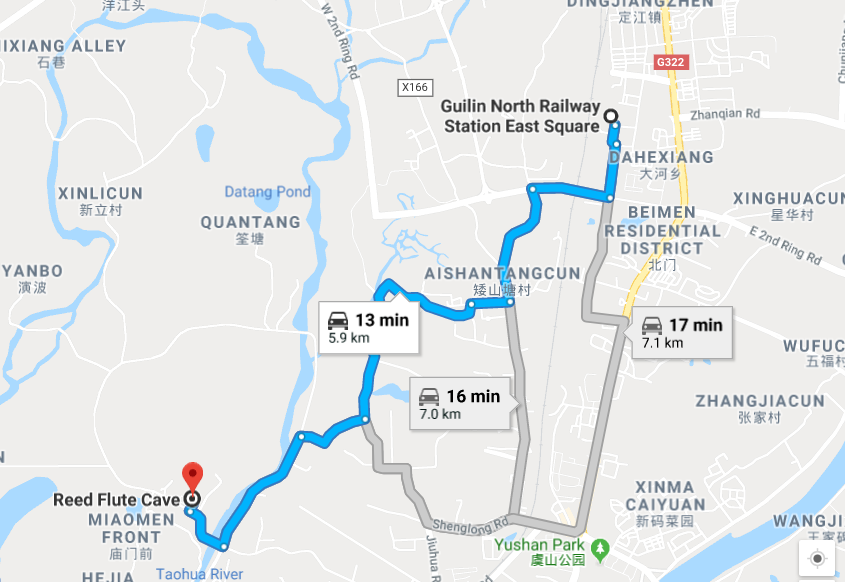 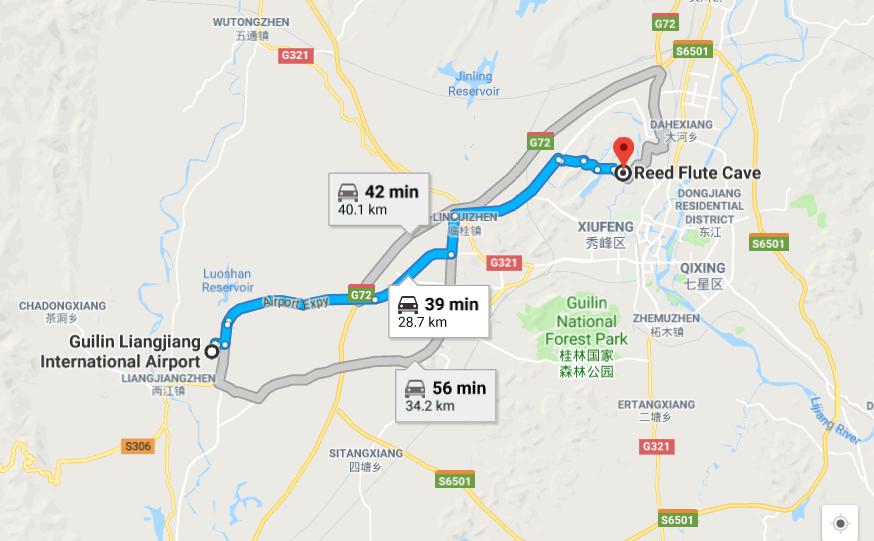