How to Get to Greater Bay Area China

Since early 2019, Hong Kong, together with Macau, Guangzhou, Shenzhen and other 7 cities of Guangdong Province (Zhuhai, Foshan, Huizhou, Dongguan, Zhongshan, Jiangmen and Zhaoqing) has been gathered together as an integrated economic and business hub, namely “Greater Bay Area" (GBA). You must have heard a lot about Hong Kong, Macau, Shenzhen and Guangzhou before. As “the most vibrant city cluster in China”, those four wonderful sites are never lack of attentions of the world. The rest cities in the GBA also draw people for cross-border excursions. However, as there are visa policies and there are so many transportation options for tourists to get to this area, you may feel like steeping into a maze when planning tours to visit the cities. Don't worry, in this guide, we will help you get rid of all the problems and make it easier for you to better plan your trip! 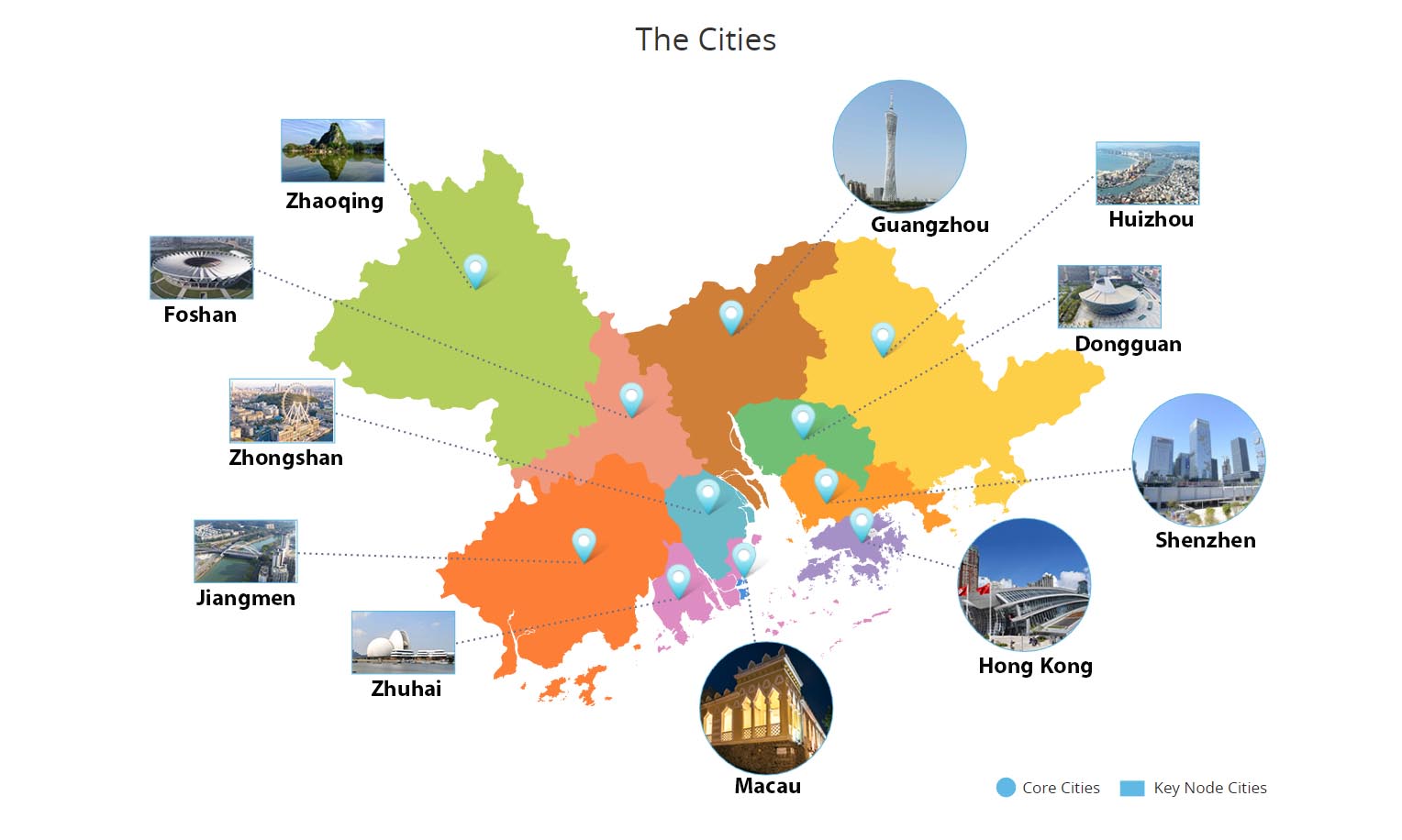 Through all the cities in Greater Bay Area are in China, two special administrative regions of Hong Kong and Macau have their own visa policies that different from each other and also different from the policy in mainland China. The Government of Hong Kong offers a pretty liberal visa policy for many countries around the world. Citizens of the specified 170 countries and people holding one of the appointed documents can entry and visit Hong Kong without visa and stay for 7-180 days. And if you are citizens of specific 79 foreign countries and territories, you can also have chance to have visa-free entry to Macau for short-term tour and business. Besides, the new 144-Hour Visa-Free Transit Policy allows foreign visitors from 53 countries to visit Shenzhen, Guangzhou and any city in Guangdong visa free for 144 hours, if he or she holds valid international travel document and connecting ticket to a third country or region.

You will need to do your own individual research depending on what country you’re from, but there’s a pretty extensive list of countries that are able to have visa-free entries to the cities in Greater Bay Area. 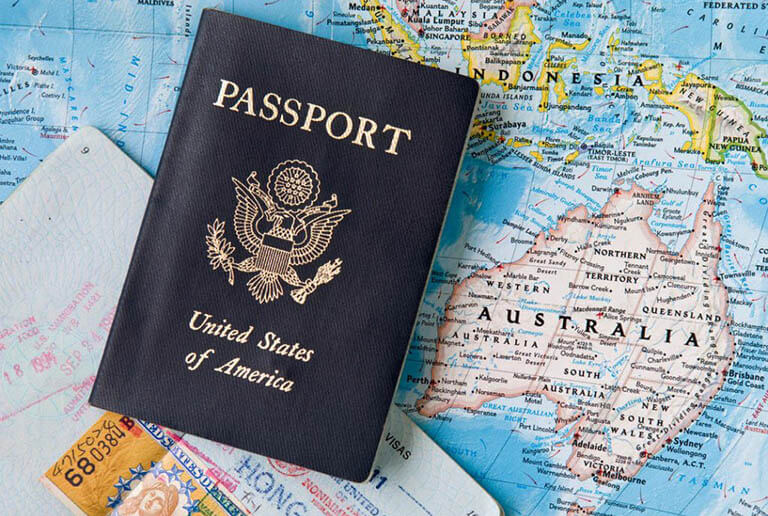 How to Get to Hong Kong

Hong Kong is located at the coastline of South China Sea. About the transportations to get to this world-class city, you’re spoilt for choice: flights, helicopters, high speed trains (also known as bullet trains), through trains, ferries, cross-boundary shuttle buses and coaches…

Usually, travelers getting to Hong Kong from cities outside China choose to catch a flight to land at Hong Kong International Airport (IATA: HKG), which serves about 170 flights routes to overseas cities and regions, including New York, Los Angeles, London, Sydney, Toronto, Paris, Rome, Tokyo, etc. Flights are also hot choices to get from many cities in Mainland China to Hong Kong, like Beijing, Shanghai, Xian, Guilin, Chengdu, Chongqing, etc.

And with the popularization of high speed trains in China, catching a bullet train to Hong Kong West Kowloon Station has gradually become a thrilling and popular idea in recent years. China’s massive high speed train railway has already connected Hong Kong with almost every major tourist cities in China where flights can get to. Guangzhou also operates Trough Trains to Hong Kong, which take only for about 2 hours around to arrive at Hong Kong Hung Kum Station.

In Shenzhen and Macau, you can also find ferries or helicopters to Hong Kong. Besides, since the opening of world’s longest sea crossing bridge - Hong Kong Zhuhai Macau Bridge, you can take cross-boundary shuttle buses and coaches via the bridge to Hong Kong. 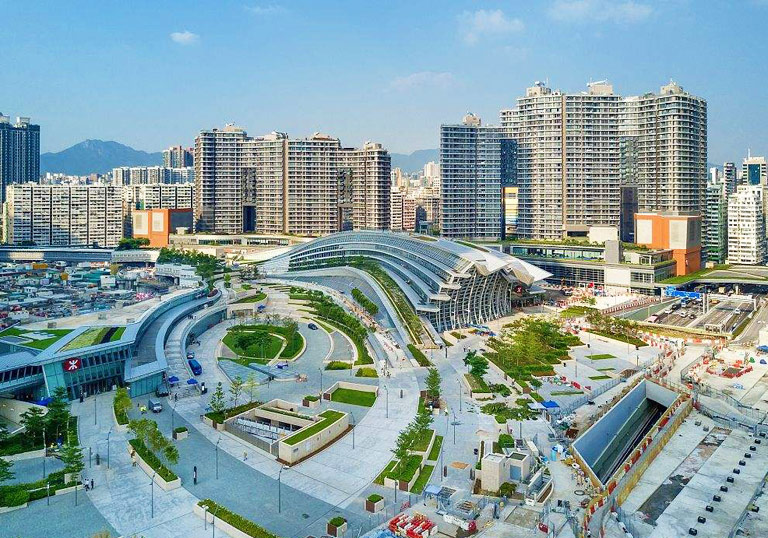 Check more about how to get to Hong Kong >>

How to Get to Macau

Macau across the sea to Hong Kong is a gambling heaven. Most of travelers can reach Macau by air, ferry, cross-boundary bus and coach.

Macau International Airport (IATA：MFM) in Taipa Island of Macau operates about 200 daily flights to cities in and outside China, including the busiest lines to Singapore, Thailand, Seoul, etc. And in Taipa Ferry Terminal and Outer Harbor Ferry Terminal, you can find 24-hour ferries from Shenzhen and Macau. If you want to experience the Hong Kong Zhuhai Macau Bridge, you can also take cross-boundary shuttle buses and coaches from Hong Kong. Trains cannot take you to Macau directly, as there is no railway station settled in Macau at present. However, Zhuhai and Macau are tightly connected via Gongbei Port near Zhuhai Railway Station. If you are fascinated about the China high speed trains, you can also choose to catch such a bullet train to Zhuhai Railway Station first and then cross the border to Macau at Gongbei Port. Many tourist cities in China offer train service to Zhuhai Railway station, such as Guangzhou, Guilin, Shenzhen, etc. 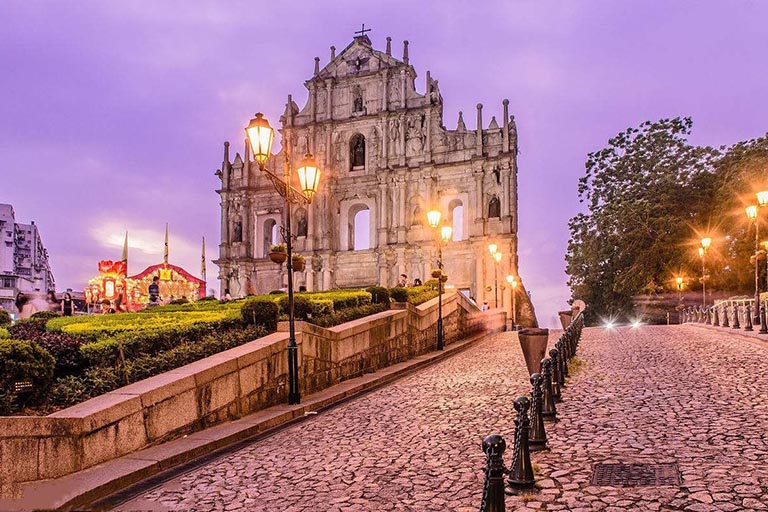 Ruins of St Paul’s in Macau

How to Get to Guangzhou

Guangzhou lies in the upper place of Greater Bay Area, a little bit further to Hong Kong and Macau than Shenzhen, but still in the 3-hour circle. If you are travel from international destinations like Amsterdam, Auckland, Bangkok, London, New York, Paris, Singapore, Seoul, San Francisco and more, don’t worry, you can easy find a flight to Guangzhou Baiyun International Airport, Also, it is easy to catch a flight from the domestic cities like Beijing, Shanghai, Xian, Guilin, Chengdu, Chongqing, Zhangjiajie, Huangshan, Xiamen, Kunming, etc. And every day, there are hundreds of high speed trains can take you to one of the 4 railway stations in Guangzhou from Shenzhen (0.5 -1 hour), Hong Kong (around 1 hour), Guilin (2.5-3 hours), Guiyang (4.5-5.5 hours), Beijing (8-10 hours), Xian (7.5-9 hours), Wuhan (7.5-9 hours), Changsha (7.5-9 hours), Shanghai (7-8.5 hours), Chengdu (8-10 hours), Huangshan (around 7 hours), Hangzhou (6-7.5 hours), Xiamen (around 4.5 hours) and more cities in China. 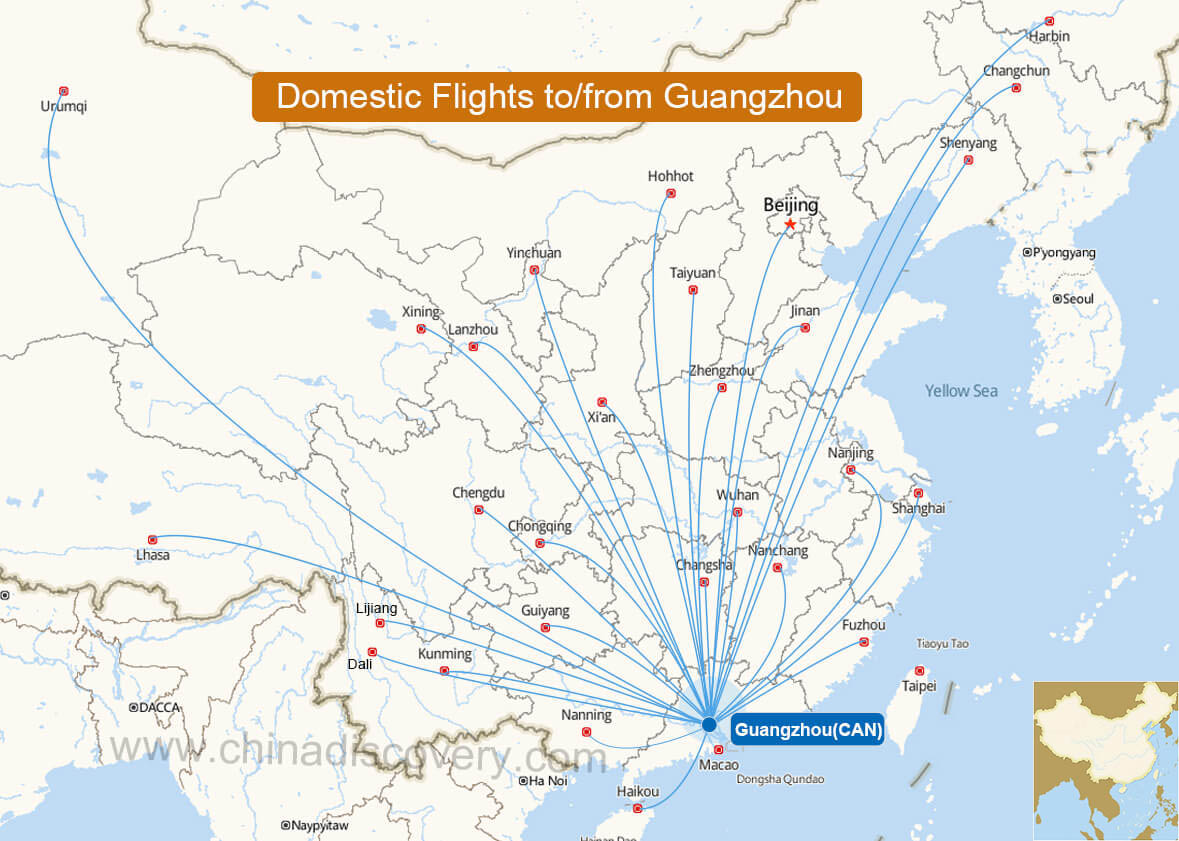 Map of Domestic Flights to Guangzhou

How to Get to Shenzhen 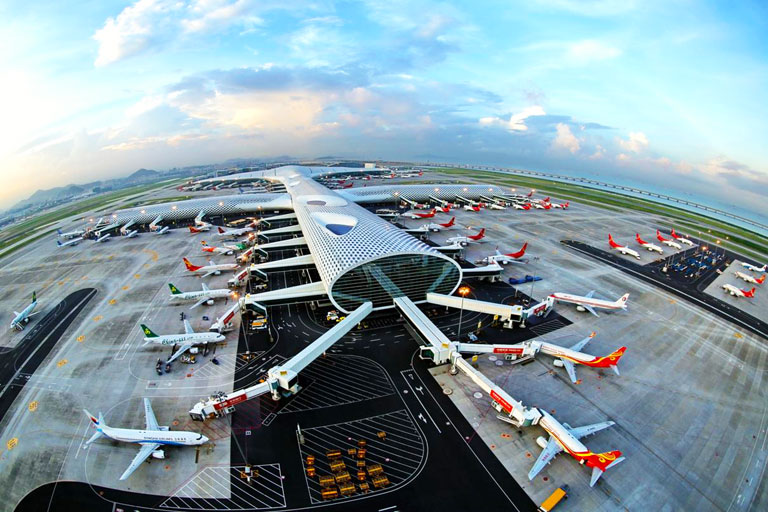 How to Get to Zhuhai

Zhuhai faces Hong Kong in the east across the sea and joins Macau in the south. To get to this city, you can take a flight, train, ferry, long-distance bus or cross-boundary bus and coach.

There are 3 ferry piers in Zhuhai, Jiuzhou Port, Doumen Port and Wanzai Port. Jiuzhou Port is the mainly used one, from where you can find ferries to/from Hong Kong (1 hour around), Shenzhen (1 hour around) and Jiuzhou Island in Zhuhai (20 minutes). Doumen Port also has one ferry getting from Hong Kong at 11:30am. Wanzai Port used to have many ships to Macau, but all the ships have been suspended since 2016. 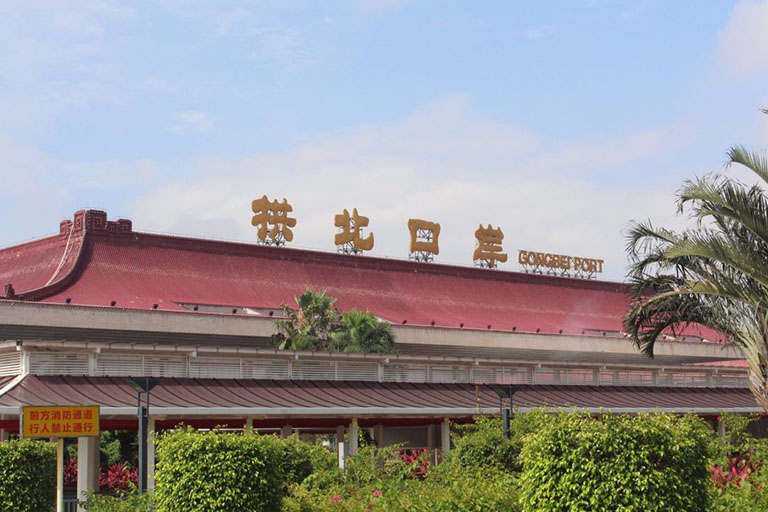 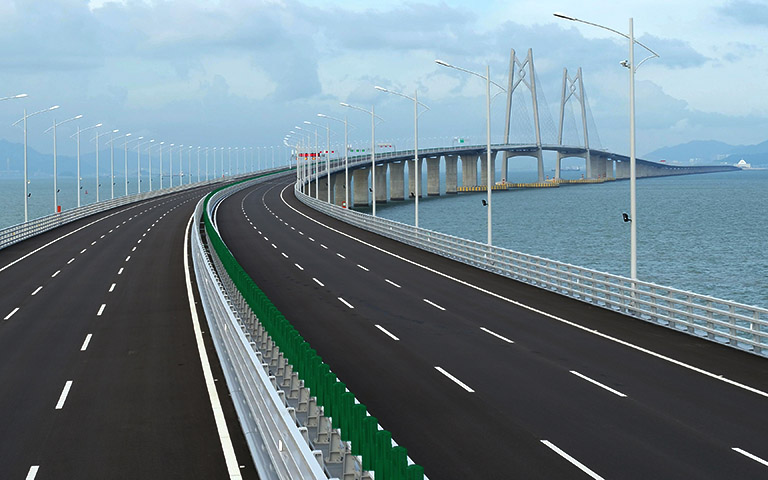 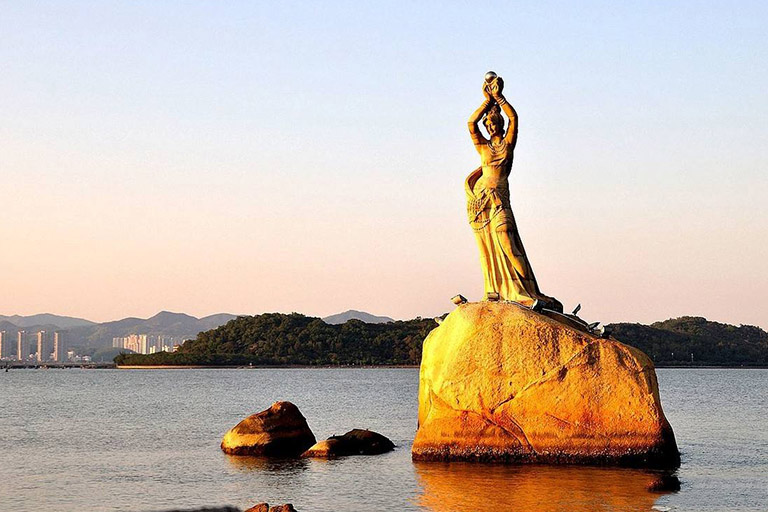 How to Get to Foshan

Foshan is the third-largest city in the Guangdong Province. Though you may not have heard its name before, you must know Wing Chun Kung Fu, Cantonese opera, Wong Fei Hung and Ip Man (Bruce Lee's master). Foshan is the birth place of Wing Chun and Cantonese opera, and also home of the two kung Fu icons. You can get to this art and Kung Fu city by flight, train, metro and coach.

Foshan Shadi Airport (FUO) has many flights from Beijing and Shanghai. However, if you are traveling from cities outside of China, you are not really recommended to choose the flights to Foshan directly, as its operating routes are much fewer than the nearby Guangzhou Baiyun International Airport. Therefore, you can arrive at Guangzhou first, and then change the metro or coach to Foshan.

If you are looking for high speed trains to Foshan, you can take a train from Guangzhou, Zhuhai, Chengdu, Chongqing, Kunming, Guiyang, Guilin, Yangshuo (Guilin), etc. Those bullet C and D trains will arrive at Foshan West Railway Station.

Guangzhou metro, or called Guangzhou subway, has one special route traveling to Foshan, namely Guangfo Line. By taking the metro, you can easily reach Foshan in about 1 hour from Guangzhou downtown. Check more about Guangzhou Metro >>

There are long-distance buses from Foshan to cities of Guangxi, Hunan, Fujian, Zhejiang, Jiangxi and Hainan provinces from 06:00 to 20:50. Besides, there are also frequent buses to some cities in Guangdong province, such as Guangzhou, Shantou and Shenzhen and more. Those coaches can be found at 13 bus stations in Foshan City, like Sanshui Bus Station, Shunde Bus Station, etc.

Warm Tip: Shunde, the birthplace of Cantonese Cuisine, is under the jurisdiction of Foshan. The best ways to get to Shunde is catching a train from Guangzhou South Railway Station (or Zhuhai Railway Station) or using private car services. 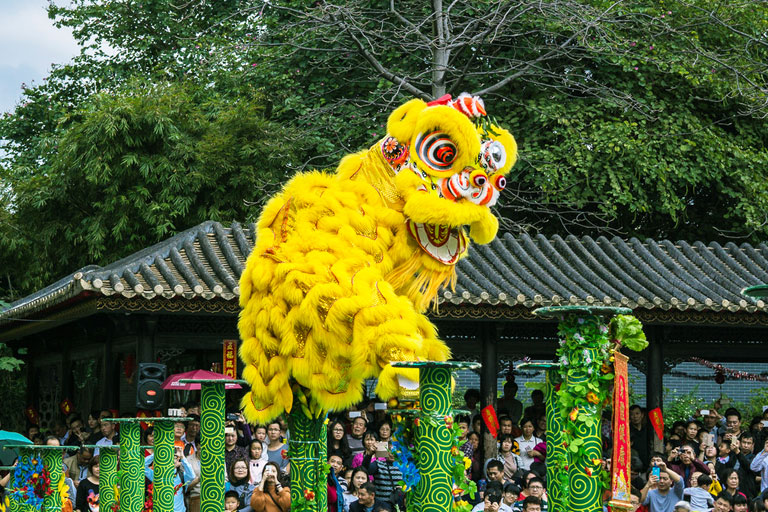 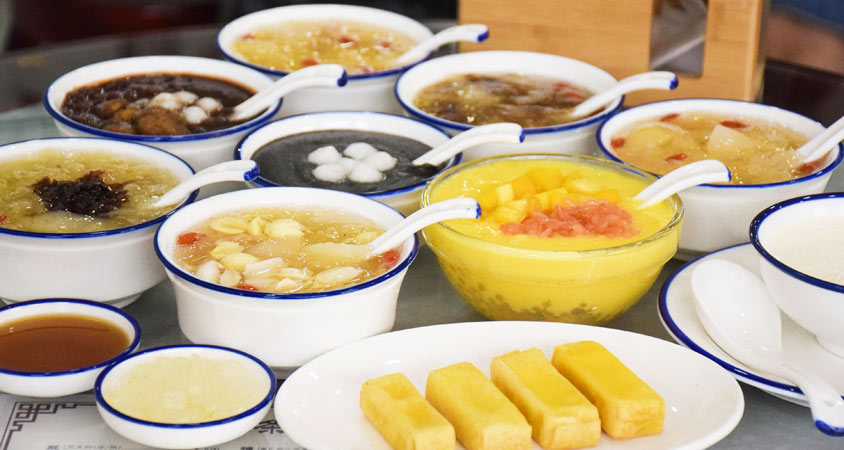 How to Get to Jiangmen

Jiangmen is a great place to learn the culture and historical change of overseas Chinese. The Kaiping Diaolou and Villages, which has won the golden prize of the “Top 50 Places Worth-visiting In China for Foreigners”, is just settled in Jiangmen. At present, there is no directly transportation to the scenic area. Therefore, you need to get to Kaiping City first and transfer by hiring a local car (more than 2 hours) or taxi. If you love trains more, you can choose the trains to Kaiping South Station (开平南站) from Guangzhou and other cities of Guangdong Province. If you arrive by coach, Kaiping Yici Station (开平义祠客运站) is recommended with shorter distance to the scenic area. 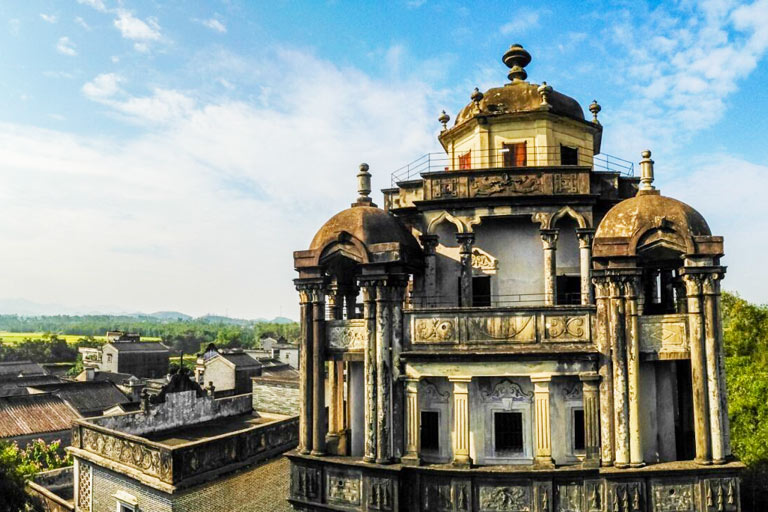 How to Get to Huizhou, Dongguan, Zhaoqing & Zhongshan

Huizhou, Dongguan, Zhaoqing and Zhongshan are the rest key node cities of Greater Bay Area. The ways to get to these cities are similar – travelers usually choose trains, coach and private cars. The massive China railway network allows you to travel to these cities by high speed trains too. If you are interested, you can check China Real-time Train Schedules to check the latest information about trains to the above cities. And all the cities in Greater Bay Area also have coaches to get to those cities. Normally, coach service is only in Chinese. If you can speak Chinese, you can check the real-time schedules of the coaches and buy a ticket at one of the bus stations near you. 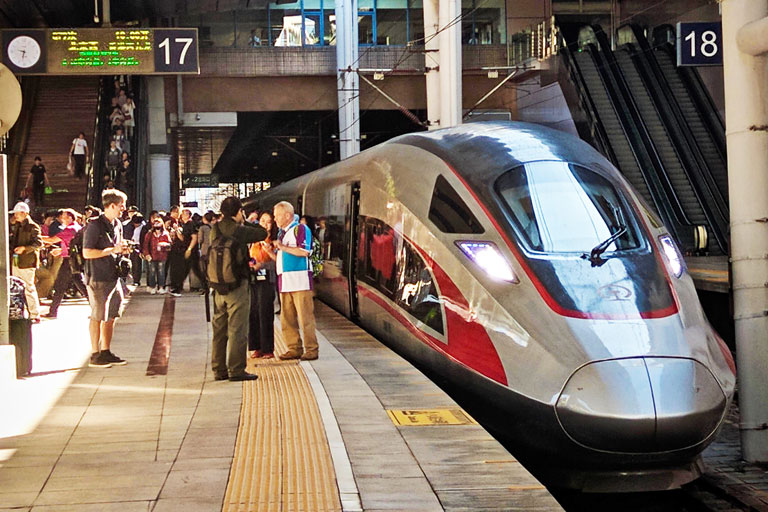 Due to there are so many places to visit in Greater Bay Area and so many choice for you to get to those cities, it may be hard for you to find the best order and ways to plan your tour in this maze-like area. Don't worry, traveling with China Discovery and then all your problems will be solved. We will customize the best tour and arrange the best means for your journey so can get really relaxed on the way and pay your attention on the attractions you are interested. If you are interested, please feel free to contact us, the tour will be customized according to your budget, interest and every special need. 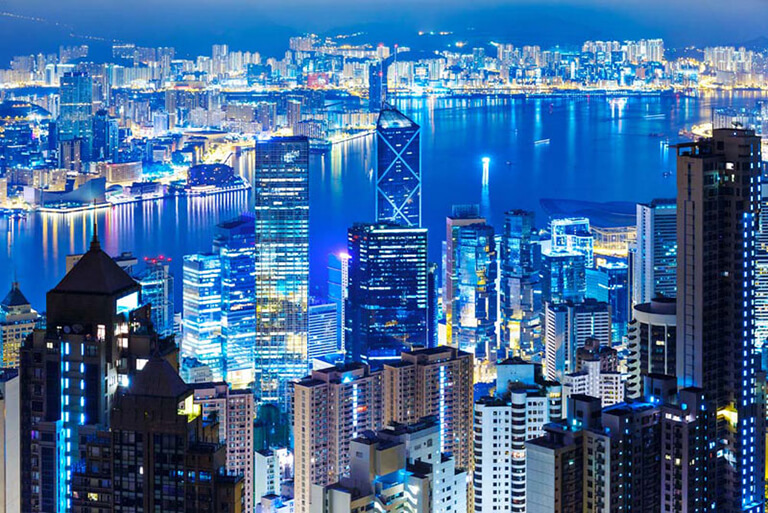 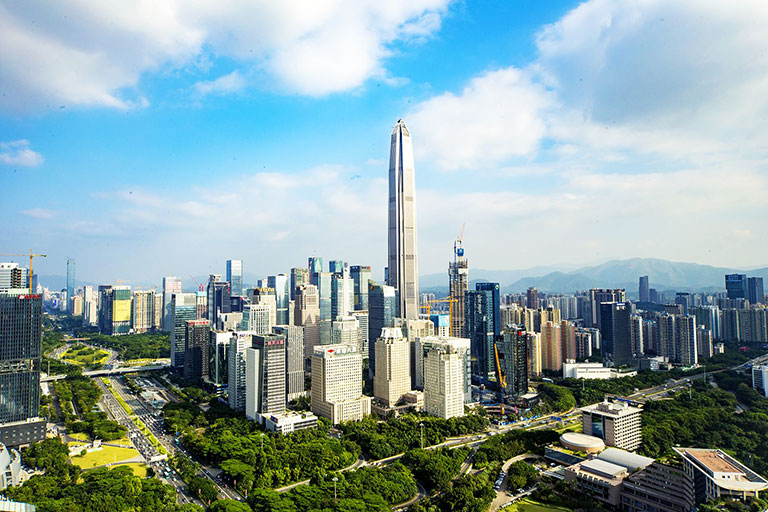 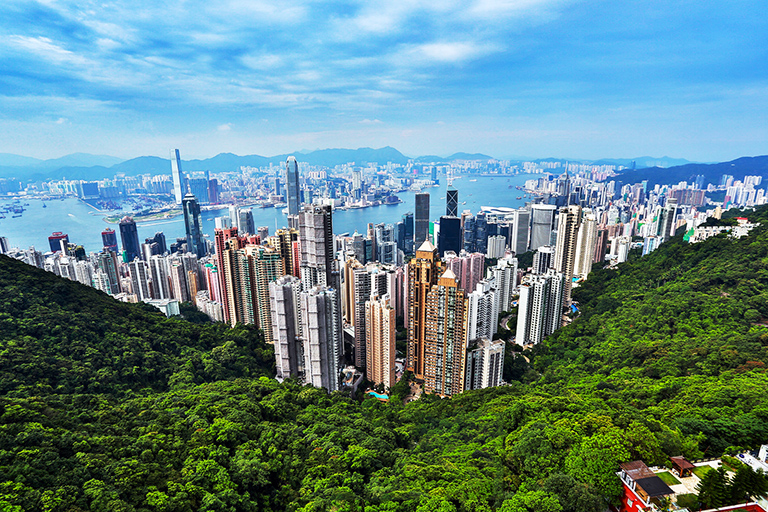 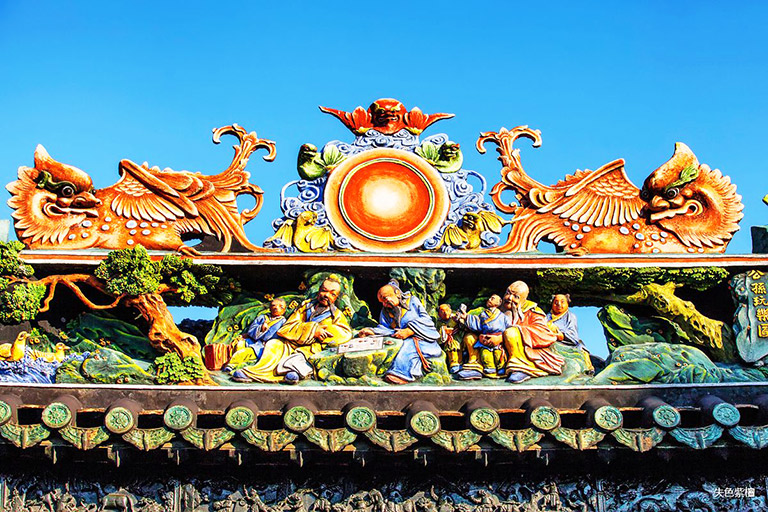