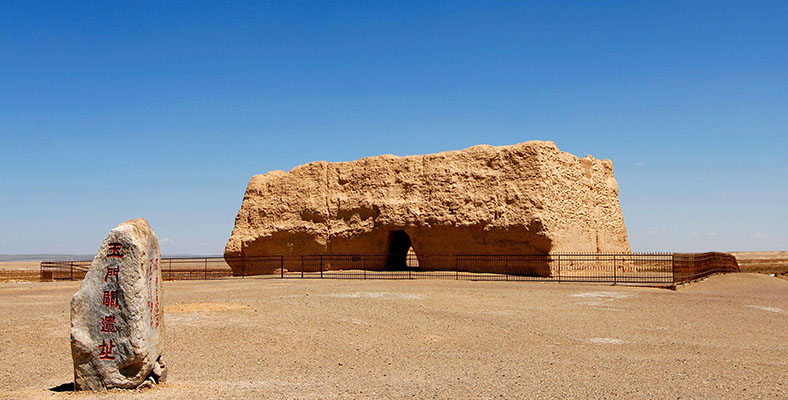 Yumen Pass, built in Western Han Dynasty, is the one of the two passes to the western regions in ancient China and the only gateway for the North Silk Road Route. It is the best-preserved huge pass on the former trade route, which was listed as UNESCO Cultural Site with related Silk Road sections in 2014.

The Yumen Pass (玉门关), or called Jade Gate Pass, the Jade Gate, Yumen Guan, Yumenguan Pass in Dunhuang, was an key strategic pass in Western Hexi Corridor during Han Dynasty. It was named for serving as the import pass of jades from the west regions. Located in the south of Sule River and northwest desert of downtown Dunhuang, Yumen Pass used to be a boundary of central China and the west regions more than 2,000 years ago, and played same significant role on the “Silk Road” as Yangguan Pass did. The ruins now recognized as the best-preserved, the most complete type and a UNESCO Cultural Property on “Silk Road” by recording the traffic management system and the Great Wall defensive system of Han Dynasty.

When it came to the early period of Emperor Wu of Han Dynasty (138 BC), to expand the territory and pacify the northwestern border, the ambitious ruler, Emperor Wu sent Zhang Qian to travel west, persuade the tribe Yuezhi in the west to make alliance and extirpate Xiongnu in the north. Zhang Qian’s first journey started from Chang’an (now Xian) and reached Hexi Corridor via Yumen Pass.

In the many years followed during Han Dynasty, Yumen Pass witnessed a large number of great historical events, including the brave generals’ suppression of frontier harassment, Zhang Qian’s second contact of East-to-West, splendid development of Dunhuang culture, flourishing trade and culture exchange between China and Eurasia. 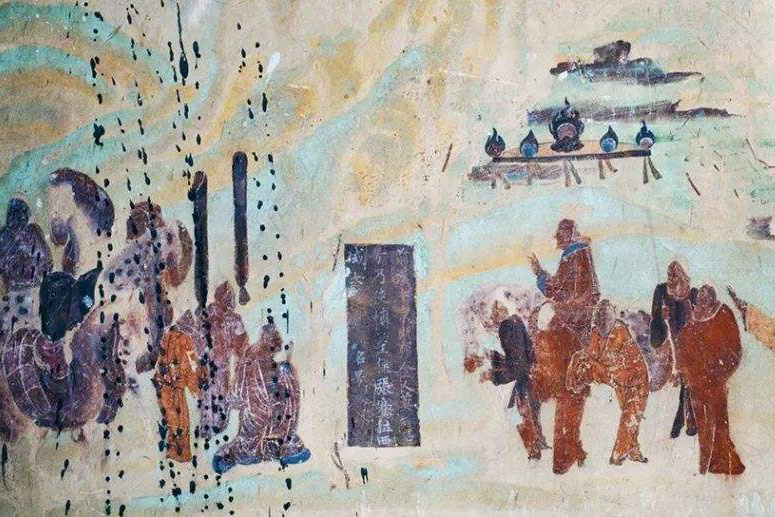 What to See in Yumen Pass

As time goes on, the authentic Yumen Pass constructed in around 111 BC has been severely damaged and only a square rammed earth left in vast desert, which is now commonly known as Small Fangpan Castle.

Holding the entrance tickets, all visitors can first learn detailed introduction and relative history background of Yumen Pass in a specialized exhibition hall in the Yumen Pass Tourist Service Center. The explanation is about 15 minutes.

Then you can walk or take a charged tourist bus to reach the Small Fangpan Castle. The remaining part is about 24 meters long, 26.4 meters wide and 10 meters high. There is a east-west wooden path in the north slope, which was former channel and postal route from central plains to the west regions. Visitors can clime up to the top through the bridleway in the northeast corner. Two gates are opened in the west and north for interior sightseeing.

Hecangcheng Relic Site (河仓城遗址), or called Big Fangpan Castle, is built in Western Han Dynasty. It it located about 15 km east of the Small Fangpan Castle, about 30 minutes by car. The Hechangcheng Relic Site is the oldest, largest quartermaster depot along the northwestern Great Wall frontier in ancient China. The spot you can see is a south-north oblong group of earth mounds, where most walls has collapsed, except the north wall in a relative better condition.

The Great Wall of Han Dynasty was built much earlier than the nowadays famous Mutianyan, Badaling, Jinshanling Great Walls of China (there all are part of Ming Dynasty Great Wall). The older Great Wall is situated about 6 km west of Small Fangpan Castle, nearly 8 minutes’by the scenic tourist bus.

Constructed in the early period of Emperor Wu, the Great Wall started from west Dunhuang, winded more than 1, 000 km eastward via Yumen Pass, Zhangye, Shandan, Wuwei and terminated in Ningxia. A few dilapidated walls on the soft Gobi and gravel hills are the only remains you can see after over 2, 000 years’ erosion. Though the site has no many things to see, the objects in the old days were primary military defensive system and a outstanding miniature of traditional defense project in northwest China. 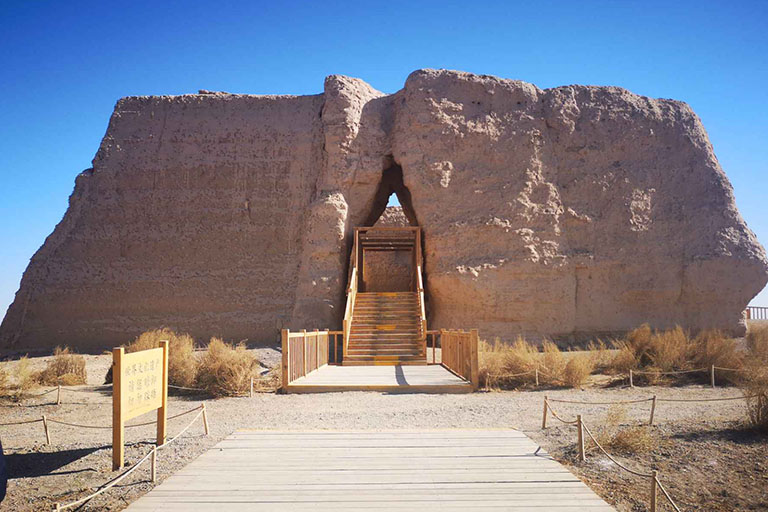 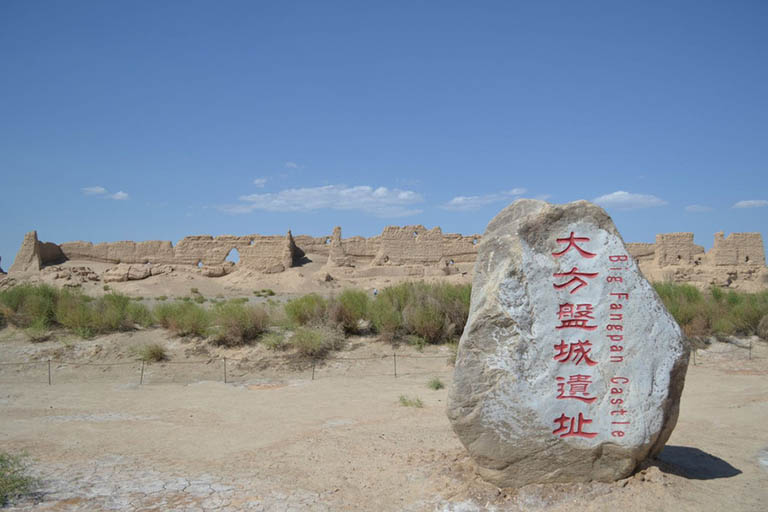 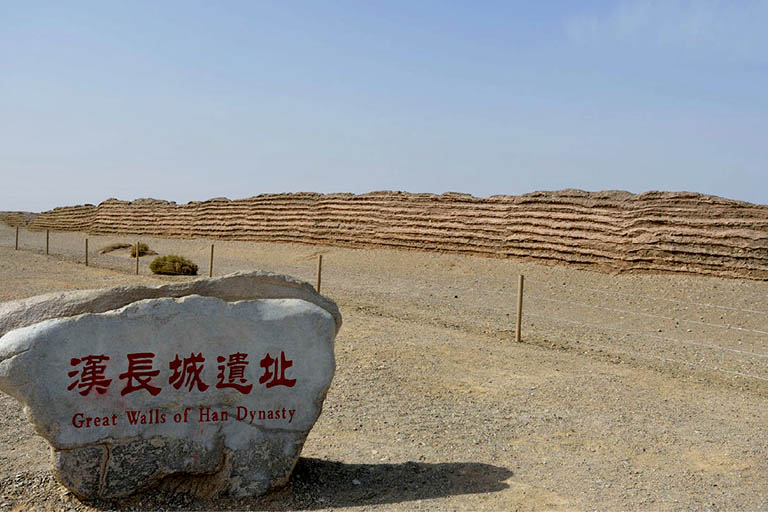 Attractions Nearby to Travel with Yumen Pass

Nearly all travelers make a trip to Dunhuang to closely look the remarkable Buddhist sculptures and mural in Mogao Caves, and enjoy amazing breathtaking desert landscape of Mingsha Mountain & Crescent Lake by the way. The tour of the two best highlights takes around 1 to 2 days. If time permits, some tourists may spend another day to discover the western Dunhuang, to Yardang National Geopark passing the midway Yumen Pass and Great Wall of Han Dynasty, Yangguan Pass together.

In the morning, you will be driven from Dunhuang city center to visit the Yumen Pass in the northwest suburb, then have a short-distance transfer to catch a glimpse of the Great Wall of Han Dynasty. After the quick visit, your next destination is the 80 kms’ away Yardang National Geopark, where stands variety of wind-erosion dunes in interesting shapes, nature magic is perfectly proved here. In the afternoon, you will return to downtown Dunhuang and have a side trip to Yangguan Pass en route. Know more historical history and information of China’s Silk Road opening and international contact to the west lands. 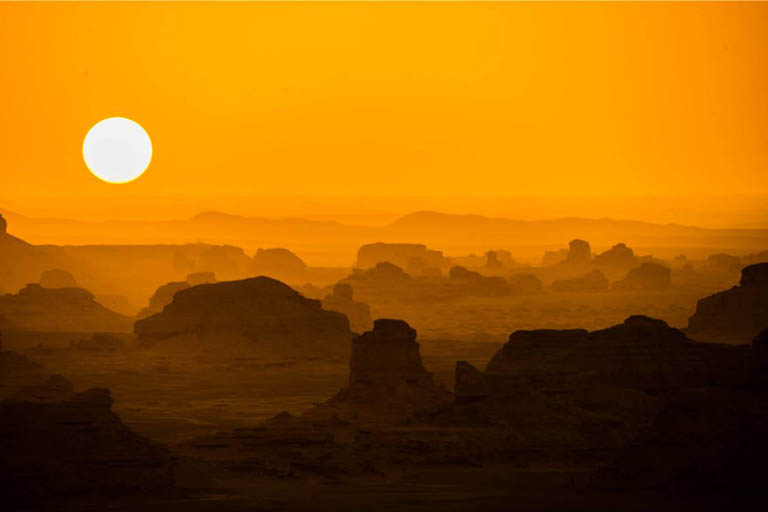 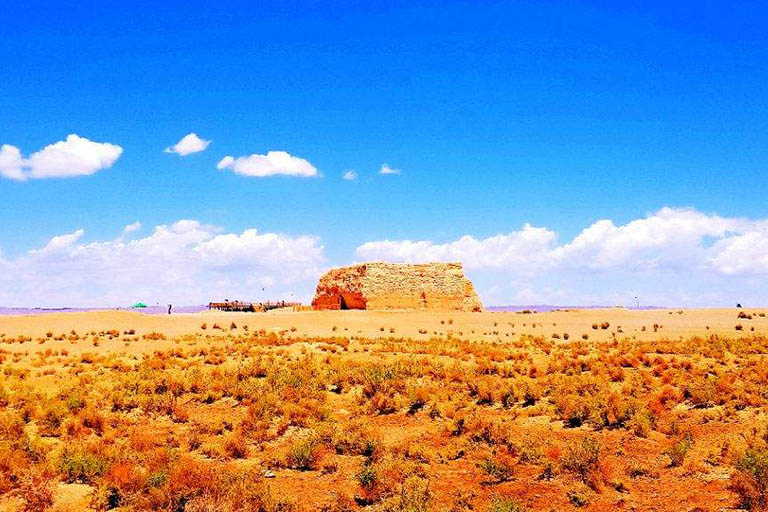 Yumen Pass under the Blue Sky

How to Get to Yumen Pass from Dunhuang

Yumen Pass is located about 90 km northwest of Dunhuang City, the northwest of Gansu, instead of Yumen City closer to Jiayuguan City. Due to Yumen Pass, Yangguan Pass, Yardang National Geopark all are in the western rural areas, without any public transportation, most people would rent a minibus or book a local tour to visit the sites together. 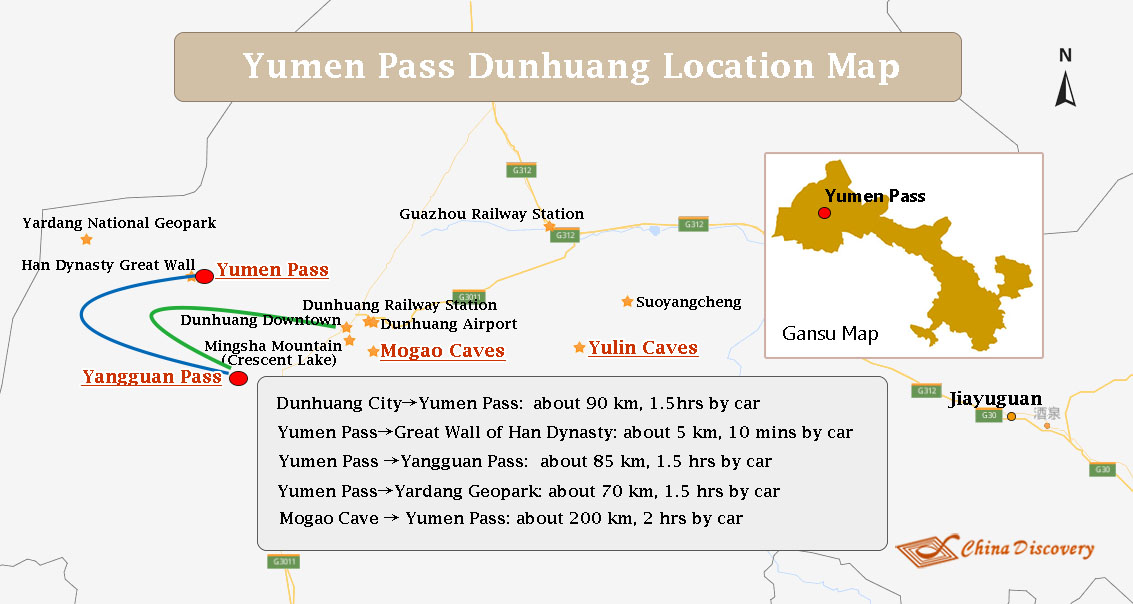 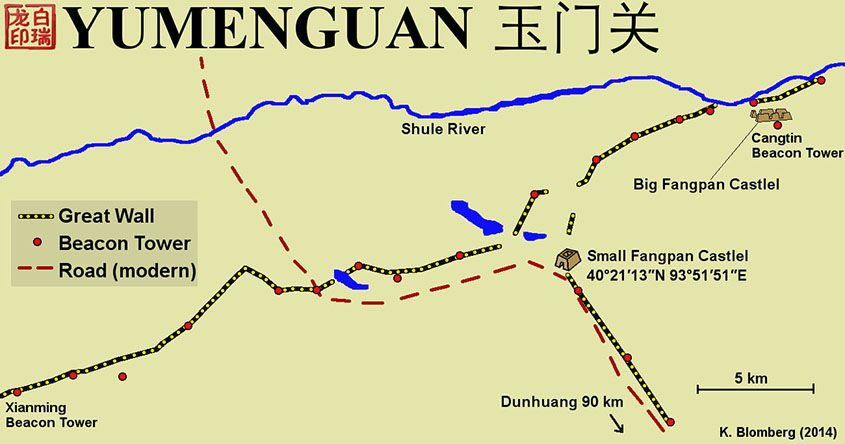 ● Yumen Pass to Great Wall of Han Dynasty: about 5km, within 10 minutes by car

Independent travelers are strongly suggested to buy the tourist bus, since it takes a long time from the ticket office to Yumen Pass, and from Yumen Pass to another spot by walking.

Tips: You may wait for the tourist bus for quite a long time in peak season, and spend limited time (10 -15 minutes or so) for sightseeing each spot.

3. Tourist Service Center: You can buy simple food and drinks, creative souvenirs in the tourist center.

4. Weather & Climate: It’s quite windy and burning in Northwestern China, summer will be very hot, bring suitable clothes and hat against the strong sunlight and prepare enough water as well.