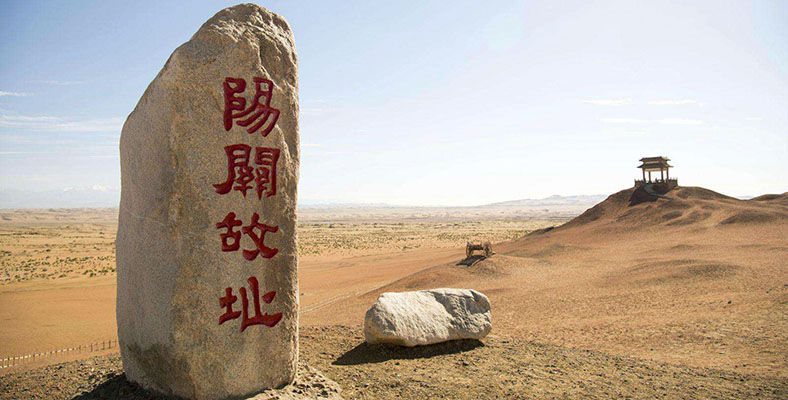 Dunhuang Yangguan Pass, built in Western Han Dynasty with more than 2,000 years’ history, is an important portal to the western regions and an vital mountain pass on the southern Silk Road as well as a significant bridge linking Northwestern China and the Eurasia.

Yang Guan, or Yangguan, Yang Pass, Yangguan Pass, Sun Pass (阳关), a mountain pass in south of Yumen Pass (玉门关), was the throat land of ancient China’s outbound traffic and the necessary pass of the southern “ Silk Road” after Dunhuang. Its military function was replaced by economic connection between China and Eurasian countries gradually. Now Yangguan Pass is a national AAAA scenic area reconstructed and based on the ancient fortress, where exhibits previous beacon towers, Han Dynasty style architectures and vast desert scenery around.

The History of Yangguan Pass, Dunhuang

In the early period of Emperor Wu of Western Han Dynasty, Zhang Qian was sent to open the “Silk Road”to unite the Yuezhi (月氏) against the Hun (northern tribe - Xiongnu). He returned via Yangguan Pass to capital Chang’an (now called Xian) and made a second travel to the west again through Yangguan Pass.

In 121 BC (period of Emperor Wuof Western Han Dynasty), the government established Zhangye, Dunhuang, Wuwei and Jiuquan, four prefectures and two defensive barriers (Yangguan Pass and Yumen Pass) in the Hexi Corridor to fight against the frequent harassment of Xiongnu. Since then, Yangguan Pass and Yumen Pass have been served as crucial passes in western Hexi Corridor, northwestern China.

Historical records show, Yangguan Pass has been a militant stronghold in many feudal dynasties since the Western Han Dynasty, and it witnessed numerous merchants, monks, envoys, travelers going out and in. It even was the inspiration for lots of literati and poets who left emotional poems. During Tang Dynasty, Xuanzang, a famous Chinese Buddhist monk, went back to Chang’an via Yangguan Pass after he traveled overland to India. As the Silk Road declined in later Song and Yuan Dynasty, Yangguan Pass therefore sadly withered.

Top Highlights to See in the Yangguan Pass

Currently, the old Yangguan Pass has been rebuilt and expanded into a huge tourist attraction imitating ancient frontier scenes. The overwhelming red glow of sunset, a lonely and giant border pass lying between Gobi and desert, a towering pass with watch tower, flowing battle flag and echoing drums, all brings you back to the valiant ancient battle field of Han and Tang Dynasties.

Lighting smoke and setting fires on the beacon tower is the fastest and most efficient way to deliver military information in ancient China. The beacons worked as alarm system, which were usually co-built with Great Walls as a complete military defense. After going through two thousand years in windy and sandy condition, the original Yangguan Pass has already no more exist, except over 10 beacon towers left. You can take a tourist bus to the tower. The square Yangguan Beacon Tower on the north mountain of Antique Beach (古董滩) standing the highest is called “Ear and Eye of Yang Guan Pass”. It is the landmark part of Yangguan Pass and has very high historical study value as the only remaining relic of Yangguan. Looking to the distant, you will be impressed by the desolate vast desert landscape.

The ancient Yangguan Pass is wildly thought as a Chinese traditional cultural symbol, where people bid his country and family for going on a long journey and expressed infinite sorrow of parting. The imitated Yangguan Fortress (仿汉阳关关城) is constructed in original layout according to historical documents. Besides, there is a angguan PathY (阳关道), a hope road showing good wishes, and tourists can experience activities like going custom clearance to go west, drinking wines and saying goodbye to friends, watching Dunhuang singing and dancing, etc.

The large group of Han Dynasty architectures are good carriers for you to see and to learn the border military culture and history. If get more time, go around the pass to enjoy rare forest park in the northwest, taste local family-made dishes and sweet rapes in the “Ten-Miles Corridor”. Prepare to be shocked by the bleak sights and brave story of battles to guard their homes. 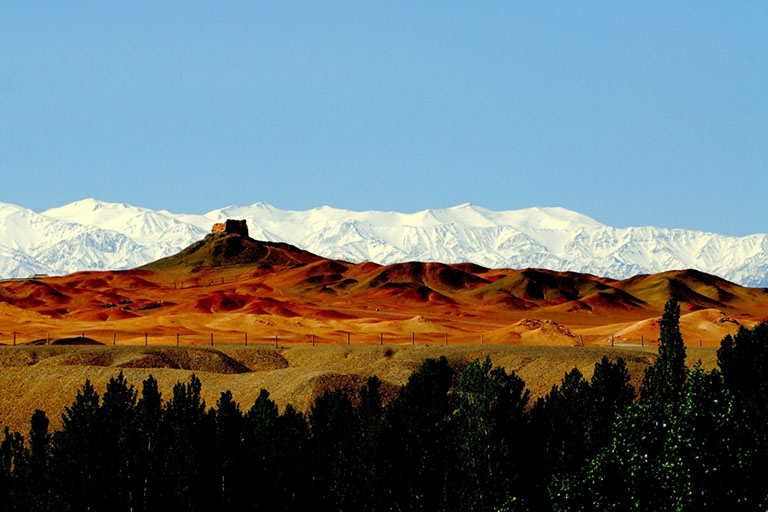 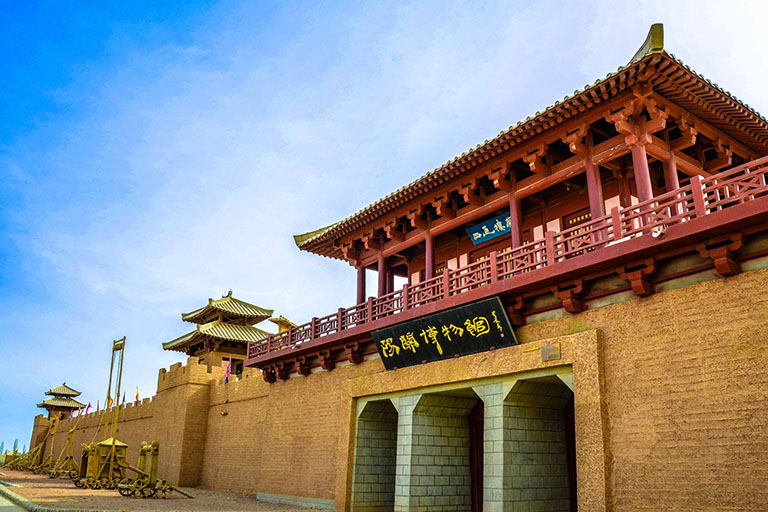 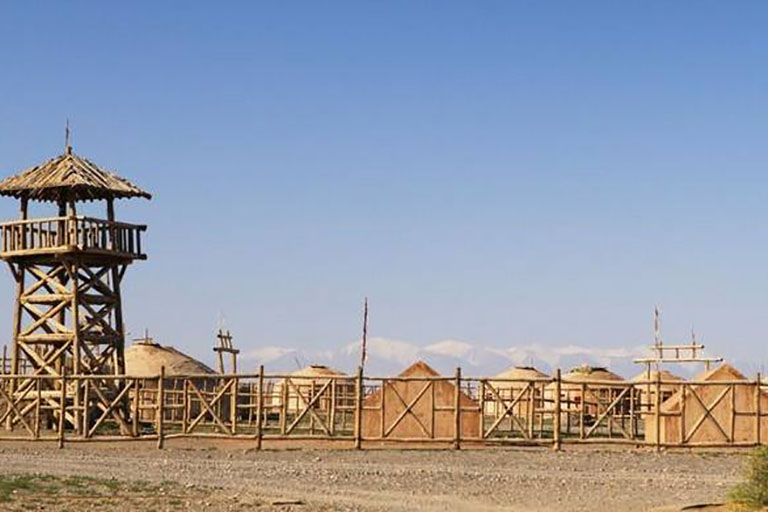 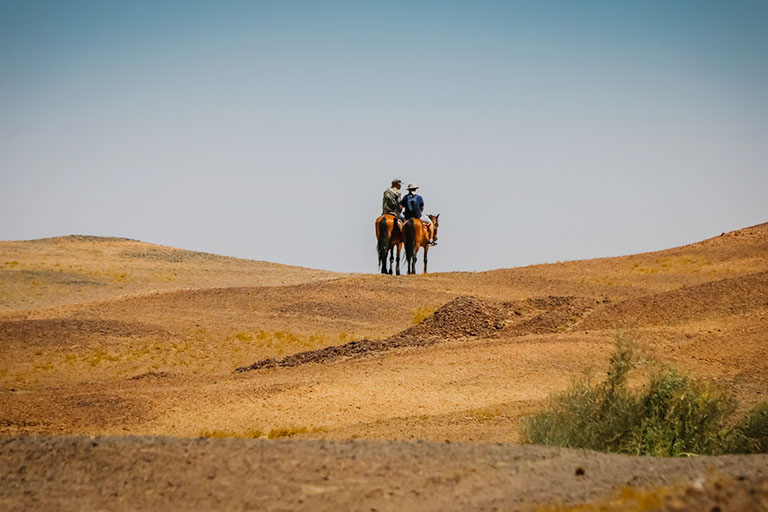 Attractions Nearby to Travel with Yangguan Pass in Dunhuang

Usually, it takes about 1 to 2 days for a Dunhuang Mogao tour with Mingsha Mountain & Crescent Lake. When time permits, you may have an Dunhuang in-depth side trip to the west areas. Yangguan Pass Scenic Area is situated in the southwest suburb of downtown Dunhuang, a single trip may takes about half a day including transportation and time stay within the attraction. The Yardang National Geopark, Yumen Pass and Han Dynasty Great Wall are rightly in the west suburb of Dunhuang, thus, most travelers like to spend one full day to tour the 4 sites in one combined trip.

First, transfer from downtown Dunhuang to visit Yuman Pass and Great Wall of Han Dynasty nearby. From the defensive ruins, you can image the rough battlefield during Han Dynasty. Then move westward further to Yardang National Geopark to view exotic Yardang land-formation and unlock the mysterious “Devil City”. Finally, drive back to Dunhuang City and visit Yangguan Pass by the way, spend some time to see the vast desert and catch more cultural and historical information of Han Dynasty’s territory expansion. 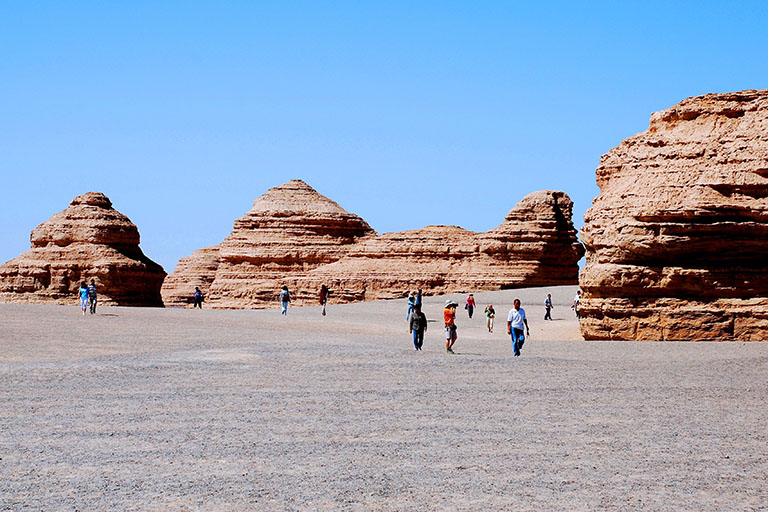 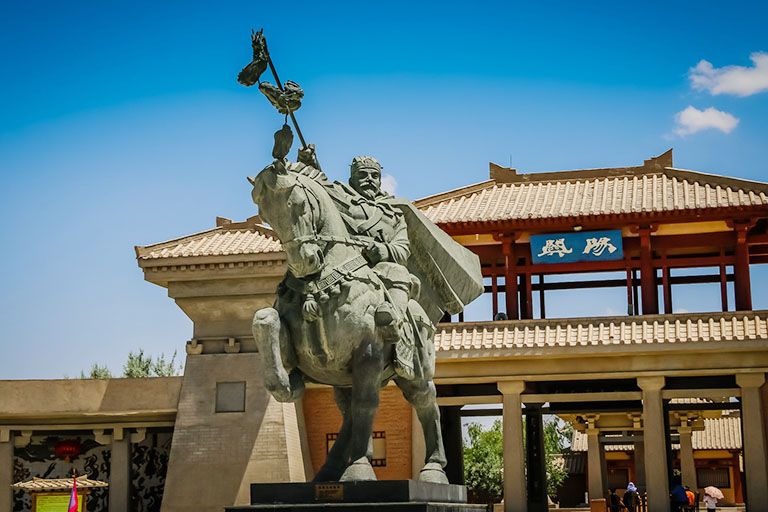 Statue of Zhangqian in Yangguan Pass

How to Get to Yangguan Pass from Dunhuang 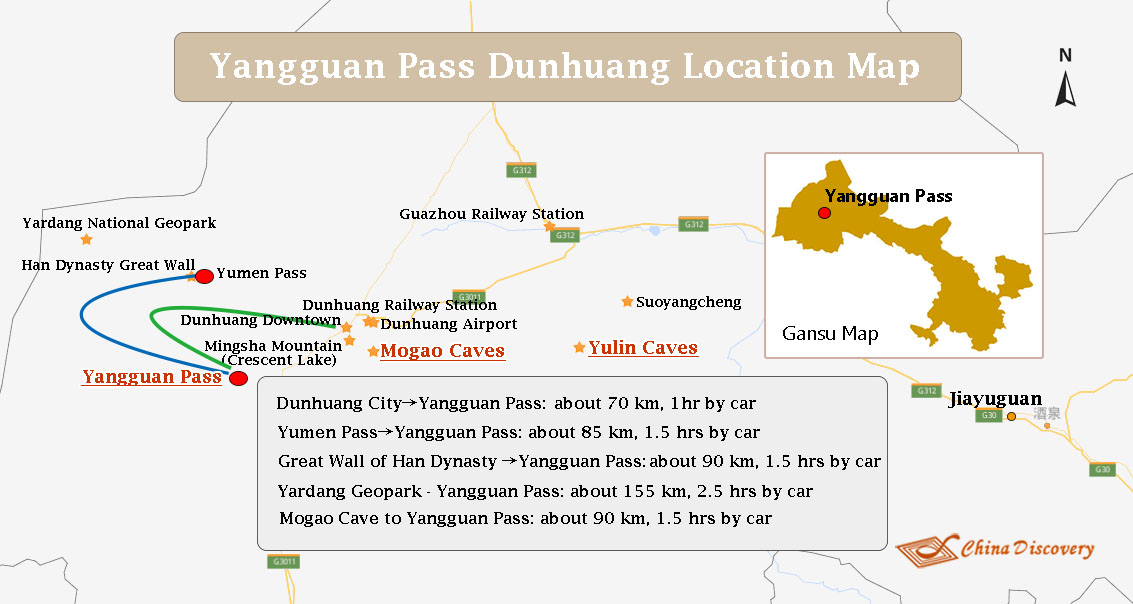 Yangguan Pass is in 70 km southwest of Dunhuang, a little far form the downtown area. There is no direct bus or train you can take from Dunhuang city center or other attractions to get to Yangguan Pass. The most convenient way is to travel with China Discovery, enjoy our private transfer service with professional tour guide and experienced local driver. The whole ride costs nearly 1 hour. Another advantage is we can arrange you a package to tour Yardang National Geopark and Yumen Pass & Great Wall of Han Dynasty.

Plan B for Independent Travelers: You can pay to charter a minibus from Dunhuang downtown to visit the Yangguan Pass. It is more budget to share the bus with other tourists, otherwise the fare might be little high for you.