Leshan Giant Buddha was listed as a World Natural & Cultural Heritage Site by UNESCO in 1996 together with Mount Emei. Located at the joint of Minjiang River, Dadu River and Qingyi River, Leshan Giant Buddha is sitting facing Leshan City across the river and it’s the largest cliff rock carving Maitreya Buddha statue in the world. The picture of the Giant Buddha is the newest after the last beautify ends on Mar.31, 2019.

Leshan Giant Buddha after the last beautify ends on Mar.31, 2019.

There is no airport in Leshan, and most tourists travel to Leshan from Chengdu or Emeishan after a Mount Emei tour. The Leshan Giant Buddha lies about 10 km/ 30 minutes' driving from Leshan Railway Station (terminal of Chengdu/Emeishan to Leshan high speed bullet trains); about 5 km/ 15 minutes' driving from Leshan Xiaoba Bus Station in the west; about 50 km/ 1 hour's driving from the western Mount Emei; about 150 km/2 hours' driving from Chengdu city center. We drove from Chengdu in the morning and drove back in the afternoon. If you don’t want be driven there, you can take the high-speed train instead. There are nearly 40 train arranged every day. You can take train from Chengdu downtown (Chendgu East Railway Station, Chendgu South Railway Station) or at Chengdu Shuangliu International Airport to Leshan Railway Station in Leshan. After arrival, you can take a tourist bus (about 30 minutes) or local public bus (about 1 hour) to reach the Leshan Giant Buddha scenic area. Taxi and private transfer only needs less than 30 minutes. 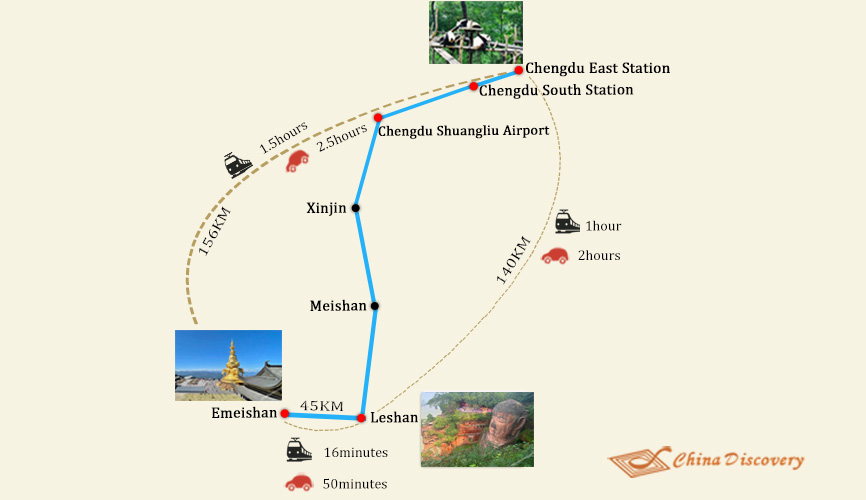 The Giant Buddha was carved from the Lingyun Mountain, with its head reaching to the mountain top and its feet standing next to the river. The total height is 71 meters; while the head is 14.7 meters high and 10 meters wide, ear is 7 meters long, nose is 5.6 meters long, mouth and eyes are 3.3 meters long, 28 meters tall between knees and insteps. Its insteps can hold over a hundred people. There are 1021 spiral coils on the Buddha head, and they were all stones inlayed onto rocky head. Two over 16-meter tall Virudhakas stand by side on cliff to protect the Giant Buddha. 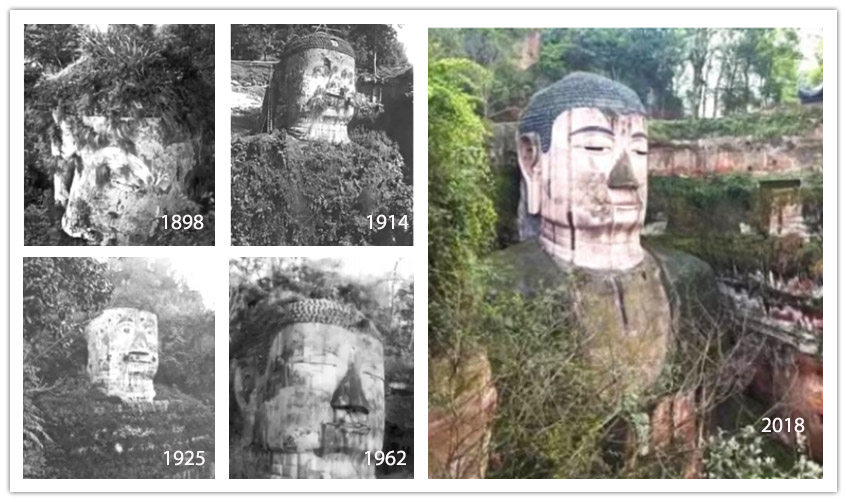 In ancient Tang Dynasty (8th century AD), the water at the joint of the three rivers was very fierce and boats were often capsized here. Thus, to slow down the water flow, Monk Haitong recruited craftsmen to build the Giant Buddha. It was first carved from AD 713, and when carving the shoulder of the Buddha, Haitong passed away. After the death of Haitong, the project was suspended for a long time. Few years later, the apprentice of Haitong continued to build the Giant Buddha with the donation of local government officer Zhangchou Jianqiong. The project was suspended again when the knees were just completed. Forty years later, the project was continued again, and after the efforts of three generations, the Giant Buddha was finally completed in AD 803. So, this huge project totally took about 90 years to complete. On history, there are several beautifies for the Giant Buddha. This visit for it is after its last beautify.

There are two ways to see the Giant Buddha. One is hiking up on Lingyun Mountain and watching the Buddha from a very close distance. In this way, traveler will enter into the scenic area, and walk to the mountain top, get to the Buddha head, hike downstairs to feet through zigzag Nine Bends Plank Road. The hiking tour is unique and interesting when you see the huge size of each part, the big head, ear, eyes, feet and toenail, and lots of nice temples and Buddhist relics along the way. Good physical condition and enough time and patience are required. Your time and effort are well worth once you get to the feet, looking at the magnificent Buddha statue. But it could be long and slow when there are huge crowds. 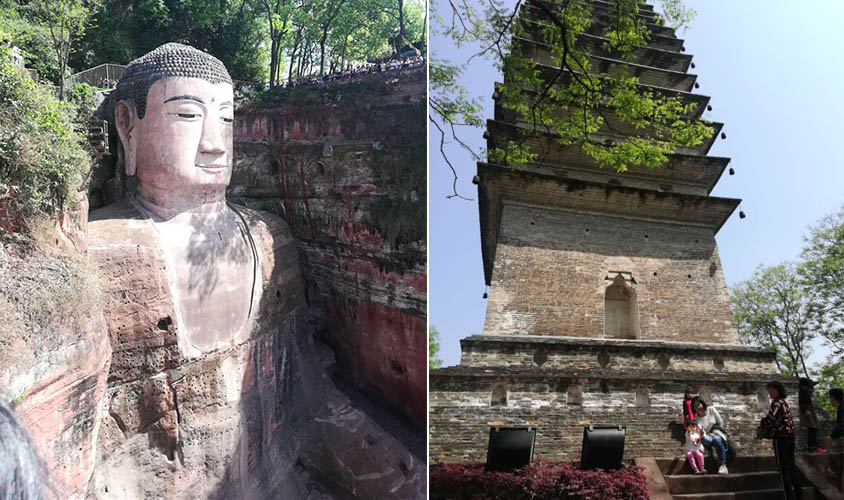 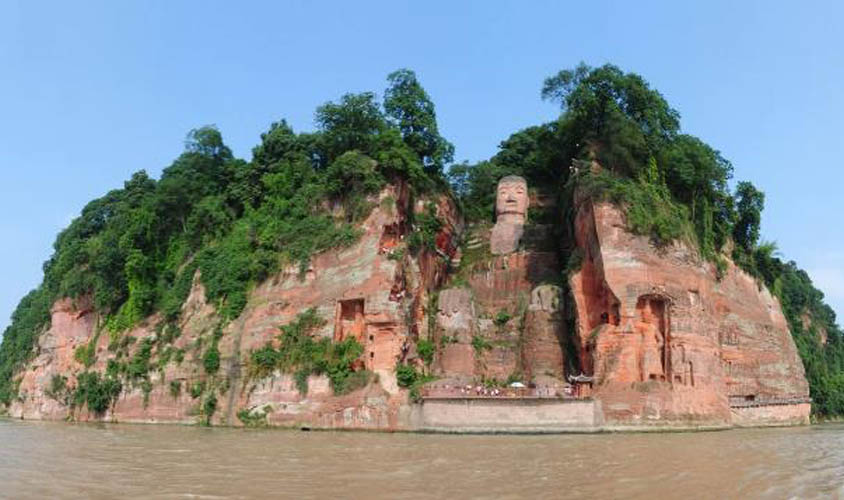 Leshan’s local snacks are very famous and delicious. If time allows, you can try it. If you don’t stay in Leshan for overnight, you can go outside of the scenic spot, there is a 500m pseudo-classic street called Jiading Fang, and tourists can find all kinds of local snacks and local specialties in here. Jiading Fang also has many tea house and bars and it’s a good place to take a rest.

Hi, I'm Rita. Are you interested in my One Day Leshan Giant Buddha Tour from Chengdu? Feel free to contact me, and I will be glad to tell you more stunning stories about the places I have visited. Or, if you want to customize a tour on your own, I'm always ready to help at any time. With my passion, knowledge and understanding of the essence of travel, I promise I will try my best to make the tour memorable and meaningful for you. 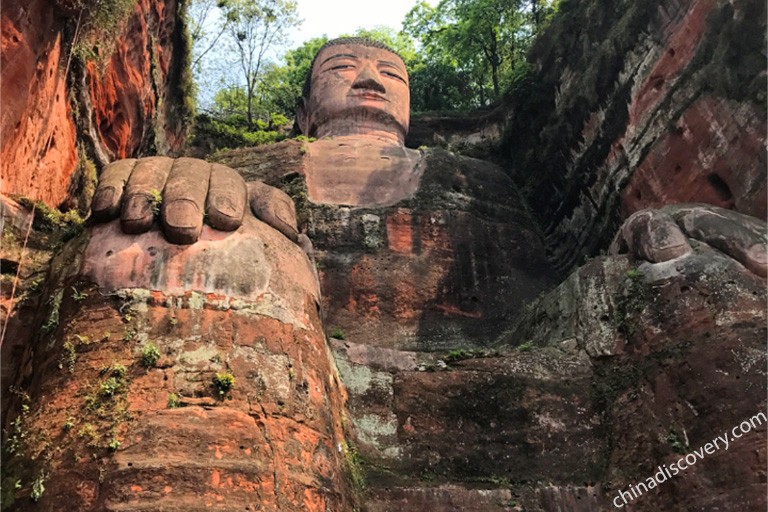