Discovery and Relics of Jinsha Site

Jinsha Site was unearthed in February 2001 in Chengdu in an area spreading across about 5 square kilometers. It was the capital of the ancient Shu state, the center of the ancient civilization center in the upper reaches of the Yangtze River from the 12th century BC to the 7th century BC. The excavation of the Jinsha Site marks the first major archaeological discovery in China since its first step into the 21st century, and it also reveals the existence of another historical relic in Sichuan Province following the famous Sanxingdui.

Among the important relics unearthed at the Jinsha site are large-scale building bases, sacrifice-offering area, general residential sites, large-scale cemeteries, etc. Among the unearthed precious cultural relics are gold, bronze, jade, stone, ivory objects and lacquerware, tens of thousands of pottery pieces, tons of ivory, and thousands of wild boar tusks and antlers. The site might be the only one in the world with the most copious quantity of gold and jade objects and the most bountiful coverage of ivory objects. It is clear now that the main cultural relics of the Jinsha Site date to the period from the late Shang Dynasty to the Western Zhou Dynasty. It was highly possible another political, economic, and cultural center rising on the Chengdu Plain after the decay of Sanxingdui civilization, the capital of ancient Shu state in the same period and one of the most important sites in the pre-Qin period in China.

Jinsha Site Museum and its Relics & Exhibition Halls and Parks

In April 2007, a museum carrying the three-thousand-year history of Chengdu soared skyward from where the site is. Containing the remains of the Jinsha site, the museum serves to protect, research, and display the Jinsha culture and ancient Shu civilization. The Museum sits on a land of 300,000 square meters, contains Relics Hall, Exhibition Hall, Tourists Center, Cultural Relic Protection and Restoration Center, Jinsha Theater, Garden Area, etc., totaling a construction area of 38,000 square meters. With multiple functions of education, research, and entertainment, this modern garden-style museum has become an iconic landscape marking the long-standing history of Chengdu.

Enter from the East Entrance (No.227, Qingyang Avenue) to see the site in the Relics Hall, and go to the Exhibition Hall to enjoy the vivid life of ancient people and to appreciate the “Sun and Immortal Bird” gold ornament and other precious unearthed objects. Then, go to see the Memorial Sculpture of Chinese Cultural Heritage inspired by the “Sun and Immortal Sun” ornament. Next, go to feel the hardship of ancient Shu people in Jade Road and admire the precious ebonies in Ebony Forest. Also, you can wander along the road to enjoy the beautiful sightseeing at Jinsha Site Museum. (for about 1-2 hours). 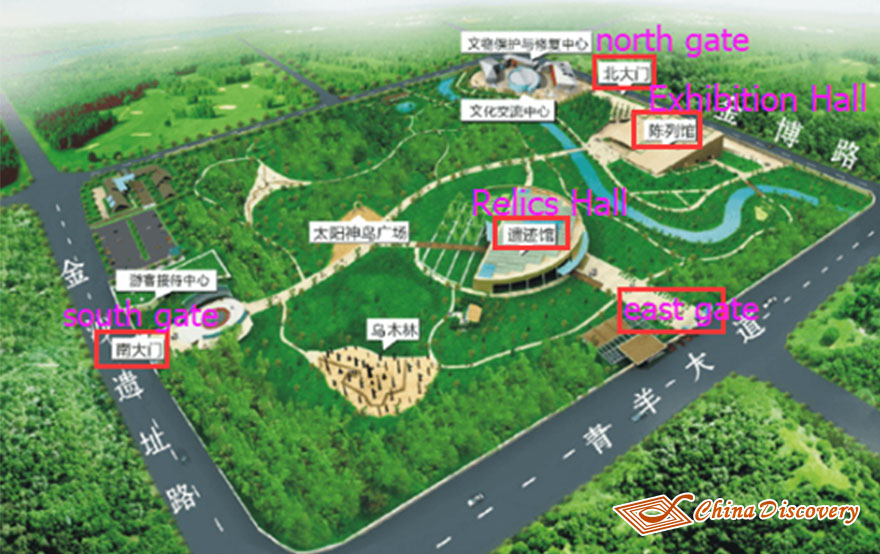 From the East Entrance of Jinsha Site Museum, you can see the Relics Hall shaped in a semicircle. Stepping in, you will be amazed by the so large scale hall that is the original excavation place of those unearthed relics. Walking on the roads paved with wood to see the historical sites within 1 meter, you will feel the antique atmosphere of the sacrificial places where tens of thousands of cultural relics were found, the biggest palace of the pre-Qin dynasty in southwest China, tomb places of multiple types, over 70 house foundations, etc.

Enter the second main spot in Jinsha Site Museum and go up to the second floor to the Exhibition Hall No.1 where you can enjoy the lifelike scene of ancient daily life in the Shu Kingdom with birds chirping, dogs barking, vigorous animals growing in the forest, two brothers taking the game back home to share with their family, etc. Appreciating such a scene, you will feel the life of ancient people is really idyllic and harmonious. Apart from that, a rich number of unearthed relics of the physical components of animals are displayed.

Exiting from Exhibition Hall No. 1, you can get to Exhibition No. 2 directly. Various aspects of ancestors about 3000 years ago are showing here in Jinsha Site Museum, such as, residences, tools, potteries, making of jade wares, tombs, all proving the high talent of people in remote time.

No. 3 - Immortal Heaven and Earth

Go down to the east of the first floor to the Exhibition Hall No. 3. A series of elephant tusks that are the important relics in the Jinsha Site Museum is on display here. Besides, quantities of historical relics are exhibiting here according to materials, like jade, bronze, gold, stone, Bu Jia (oracle tortoise sell), etc. You will be attracted by the solemn and mysterious atmosphere here with the dark light and bead curtains dividing the room.

In the west of the first floor is the Exhibition Hall No. 4. In the center, you can appreciate the essence of the Jinsha Site Museum, the “Sun and Immortal Bird” gold ornament, which is 0.02 cm thin, 12.5 cm in outer diameter, and 5.29 cm in inner diameter. With a sun with 12 dentate rays in the middle and 4 immortal birds flying around the sun, this ornament expresses people’s respect for the sun as well as bird and their pursuit of a harmonious life and bright future.

With an outer diameter of bai is 12.5 cm, inner diameter of du is 5.29 cm, the thickness is 0.02 cm, weight is 20 grams, the whole device is round and the body is extremely thin. The pattern is expressed in a hollow form, divided into two layers, the inner layer is a circle, and twelve rotating tooth-like rays are equally spaced around it. The outer layer pattern surrounds the inner layer pattern and consists of four identical counterclockwise flyings. It is composed of birds. Four birds face each other back and forth, flying in the same direction, opposite to the direction of rotation of the inner vortex. This instrument reproduces the myths and legends of ancient humans "Golden Crow Negative Sun", and reflects the strong worship of ancient humans to the sun and birds. The condensed composition of this tool is representative of the brilliant achievements of the golden craftsmanship of the ancient Shu Kingdom. On August 16, 2005, the "Sun Bird" gold ornaments officially became a symbol of Chinese cultural heritage.

The big golden mask is 19.5 cm wide, 11 cm high, 0.04 cm thick, and weighs 46 grams. This is currently the most complete and largest piece in China during the Shang and Zhou Dynasties. Its shape is different from that of the small golden mask. The face is square, the forehead is flush, the long knife-shaped eyebrows are raised, the eyes are big, the triangular nose is tall, the rectangular ears, and the earlobes are perforated, which looks very majestic.

It is 22.2 cm high and 6.9-6.3 cm wide, made in sapphire, with warm texture and translucent. The whole vessel is divided into ten sections. Each section is engraved with simplified human face patterns. The crest is represented by a rectangular horizontal edge engraved with fine parallel lines. Two circles, one large and one small, are cut out with a tube drill to represent the eyes and eyeballs. There are geometric patterns resembling cirrus clouds on the rectangular short rails, which represent the mouth. A human-shaped symbol is engraved on it. The surface of the device is smooth and smooth, the utensils are made very neatly, and the inside and outside of the whole device are polished.

No. 5 - Seeking Answers to the Mysteries of Jinsha

Walking to the basement first floor, you can see this hall in the west where you can enjoy from Sanxingdui culture, Jinsha-12 bridge culture, to the culture of ancient Shu Kingdom, and have a better knowledge of the historical background of Shu Kingdom.

At the basement first floor. The specially made movie “Dreaming Back to Jinsha” with 4-dimension skill takes you back to 3000 years ago to experience the abundance and beauty of Jinsha in the ancient Shu Kingdom. (RMB 20/person), normally, it is optional and excluded for the clients in the trip itinerary. Available time:

As a national archaeological site park, the museum’s garden area has lush forests, lush trees, and blooming flowers everywhere throughout the year. There are also many cultural landscapes in the park, such as "Golden Sand Deer Garden", "Jade Road", "Ebony Forest", and "West Mountain Water View Plaza", which are full of poetic expressions of the ancient Shu Jinsha period.

Hi, I'm Rita. Are you interested in my 1 Day Chengdu Jinsha Site Museum Tour? Feel free to contact me, and I will be glad to tell you more stunning stories about the places I have visited. Or, if you want to customize a tour on your own, I'm always ready to help at any time. With my passion, knowledge and understanding of the essence of travel, I promise I will try my best to make the tour memorable and meaningful for you. 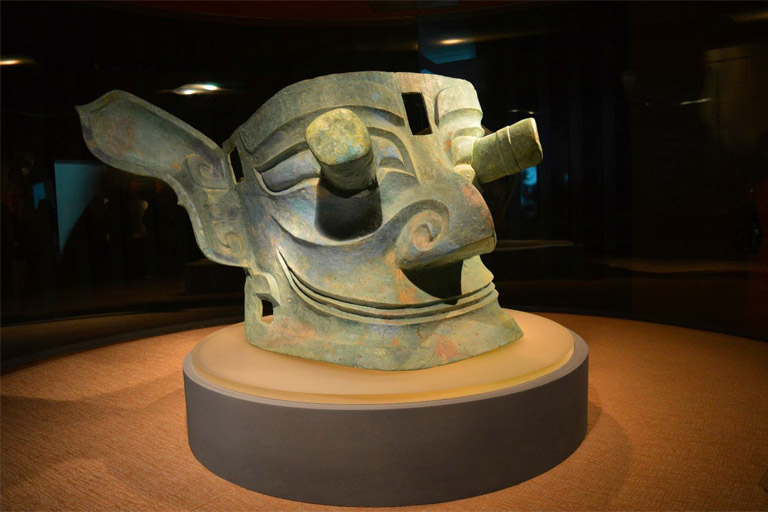 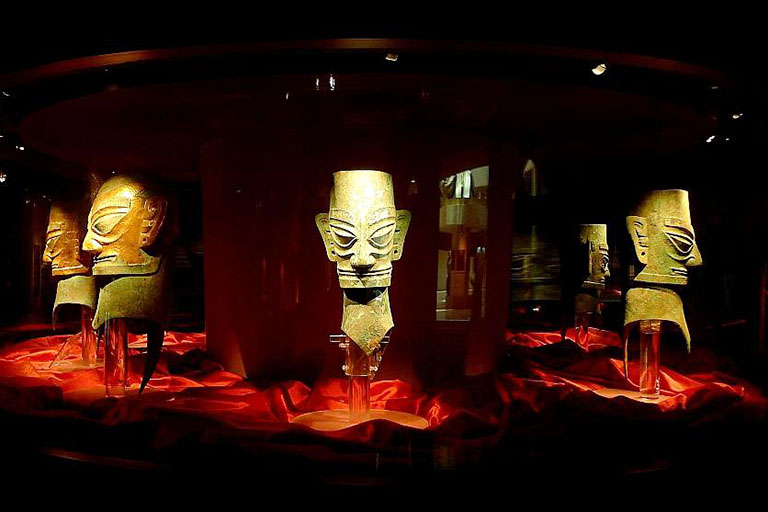