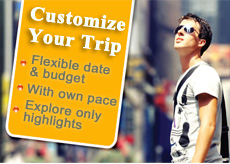 A Chinese meal is consisted of two parts: staple food, normally made of rice, noodles or steamed buns, and ts'ai, vegetable and meat dishes. (This is different from Western meals, which take meat or animal protein as main dish). The primary eating utensils are chopsticks (for solid foods) and ceramic spoon (for soups and congees). In a Chinese meal, everyone will have their own rice bowl; however, the accompanying dishes will be served in communal plates and shared by all people. Normally, the dishes are often eaten together with a mouthful of rice. Desserts are not main course in China; instead, Chinese desserts are considered as snacks eaten between two meals. If dessert is served in the meal, they will be served during the course of meal with no firm distinction made. If served at the end of the meal, the dessert is normally fresh fruit. 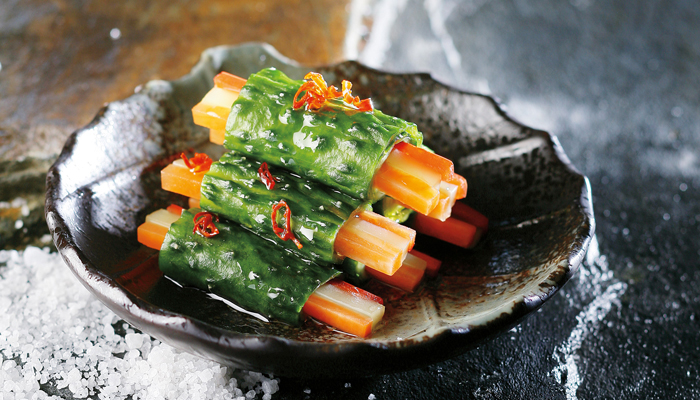 Cold dishes are the first course in traditional Chinese banquet. Salt, sugar, chili powder, light soy sauce, vinegar and sesame oil are often used to make cold dishes. Cold dishes attach great importance to the designing of the dish, which is the “shape” of the dish. Normally, cold dish can provoke people’s appetite. 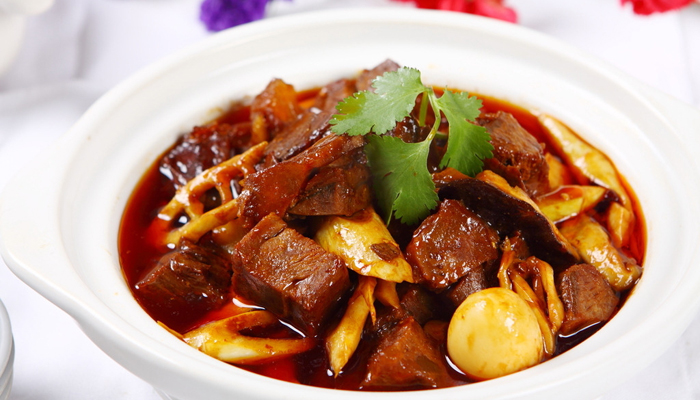 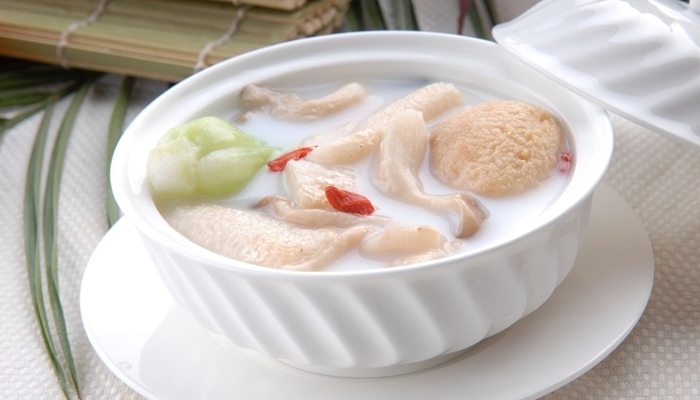 Instead of adding milk or cream into the soup, Chinese soups are adding refined starches from corn to thickening the soups. There are also light soups which don’t use starches. Normal ingredients for soups are vegetables and meat, like pork and chicken. Soups are served following the hot dishes. Chinese people believe that soups are good for health. 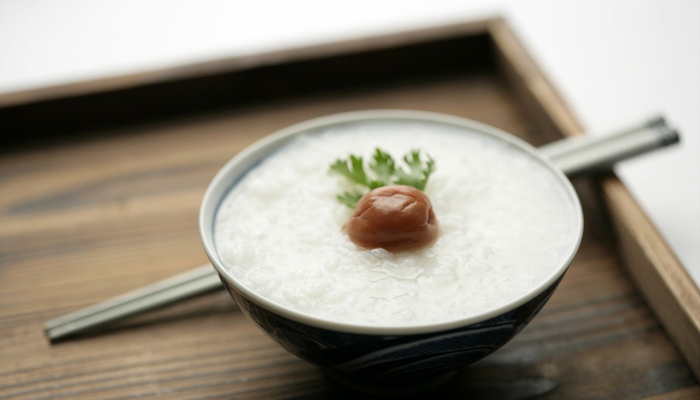 Congee is a kind of porridge or gruel. Except for rice and other cereals, meat, fish and sometimes vegetables and flavorings are added into the congee. Congee is a good choice for breakfast. Congee is easy to digest, so it’s a great choice of ill people and young infants. 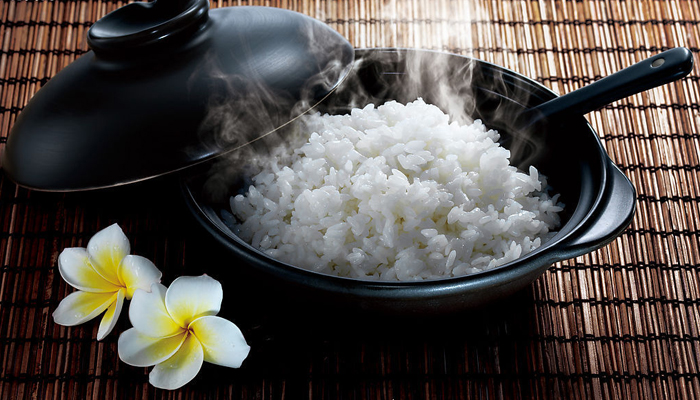 Rice is the staple food in southern China, for southern China is the rice farming areas. People always eat steamed rice. While in Northern China, which is a wheat farming area, people normally eat flour-based food, like noodles, mantou (a kind of steamed buns) and dumplings. 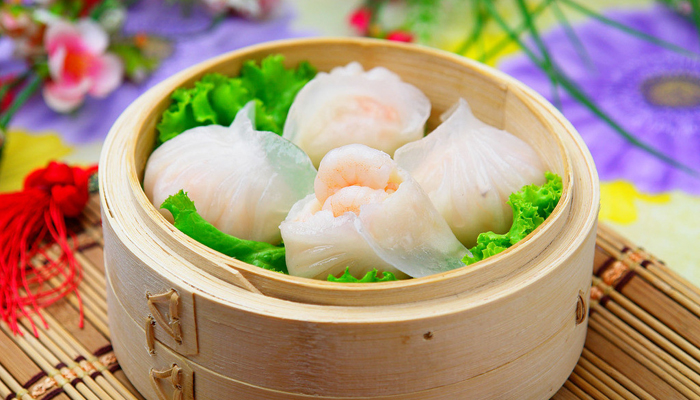 Xiaochi are a kind of snacks. They are often sold in street stalls or small restaurants. Normally, one stall only sells one kind of snacks. Xiaochi is kind of light meal, and it’s often self-contained and easily portable. Different regions have different Xiaochi. They are very popular among tourists and local people.

As the capital of China, Beijing is not only famous for the Forbidden City, the typical food there is also worth a try, such as the roasted duck, Lǘdagunr (驴打滚), Yellow Pea Cake (豌豆黄), and Fried Liver (炒肝). In the morning, having a bowl of hot Douzhir (豆汁儿) with deep-fried dough sticks or steamed stuffed bun would be such a satisfaction. Another ancient capital Xi'an is the representative of the food in northwest China. There are all kinds of noodles like Steamed Cold Noodle (凉皮), Buckwheat Noodle (荞麦饸饹). Xi'an people even create a Chinese character pronounced as "Biáng" that can not be typed in computer to name a local noodle. Apart from that, the Chinese Hamburger (肉夹馍) and Lamb Stew with Vegetable (水盆羊肉) are also very popular. Unlike the favour for noodles or steamed bun, people in Guilin have a preference for Rice Noodles (桂林米粉). That is also a difference between the taste of people in the north and people in the south. Other food such as Stuffed River Snails (田螺酿), Braised Duck with Ginkgo (白果炖老鸭), Yangshuo Beer Fish (阳朔啤酒鱼) should also be added to your list. Speaking of Chinese food or snack, there is no one in China that would not recommend Chengdu. Chengdu food is always described as hot and spicy. That is true for food like Bang-Bang Chicken (棒棒鸡) or Sliced Beef and Ox Tongue in Chili Sauce(夫妻肺片). But there are also snacks like House Special Pancake(蛋烘糕) or Zhong Dumpling (钟水饺) that are with a light flavor. You can always find something you love to eat in Chengdu!

As the famous French sinologist Jacques Gernet has stated, “There is no doubt that in this sphere China has shown a greater inventiveness than any other civilization.” Indeed, Chinese are among the peoples of the world who have been particularly preoccupied with food and eating. This food culture has formed since the ancient time and is deeply rooted in traditional Chinese culture, including Yin-Yang and Five Elements, Confucianism, Traditional Chinese Medicine, cultural and artistic achievements and national characters. In general, the Chinese food culture has the following features:

China has a vast territory and abundant resources, and each region has different climate, natural products and folk customs. After a long time, different region has formed its own food flavors. For example, people in southern China take rice as staple food, while people from northern China are used to eat noodles or steamed buns as staple food. As for the flavor, the whole country can be generally divided into four parts: sweet south, salt north, sour east and spicy west.

Chinese people will change their menus as the switch of each season, from the raw materials to the cooking methods, each season uses different seasonings and accompany dishes. Winter has a thicker and rich flavor, while summer features in light and cool flavor; cuisines in winter are most braised or stewed, while in summer, they are mostly served as cold and dressed with sauce.

Chinese cuisine puts great importance on the aesthetic sense of the dish, and pursues the harmony in color, aroma, taste, shape and utensil. The aesthetic sense of the cuisine can be expressed from multiple aspects. No matter the raw material is Chinese cabbage or carrot, they can all be cut into different shapes to match the whole dish, which gives people a highly unified mental and physical enjoyment.

Chinese people believe that except providing nutrition to the body, food can also cure disease. When you are not serious ill, you can cure your disease by eating the right food, only after the food doesn’t work, you may turn to the medicine. Medicine is believed to have some toxicity more or less, thus, food is a safer way to maintain health and cure disease (sadly to say, it works slower).

Traditional Chinese philosophy has infiltrated in every respects of Chinese food culture.

Yin-Yang and Five Elements: Yin and Yang represent two complementary aspects of every phenomenon. While Five Elements refer to meter, wood, water, fire and earth, and the nature is created by the circulation and the mutual promotion and restraint among the Five Elements. When applying this philosophical thinking into Chinese Food, Yin and Yang represent two aspects of human body, while five elements mean the food can be divided into five categories: hot, warm, neutral, cool and cold. Eat hot and warm food can promote the Yang in human body, while eat cool and cold food can promote Yin in human body. Neutral food is a kind of balance of human body. Only the Yin and Yang in human body keeps in a balanced level, people can maintain his health. 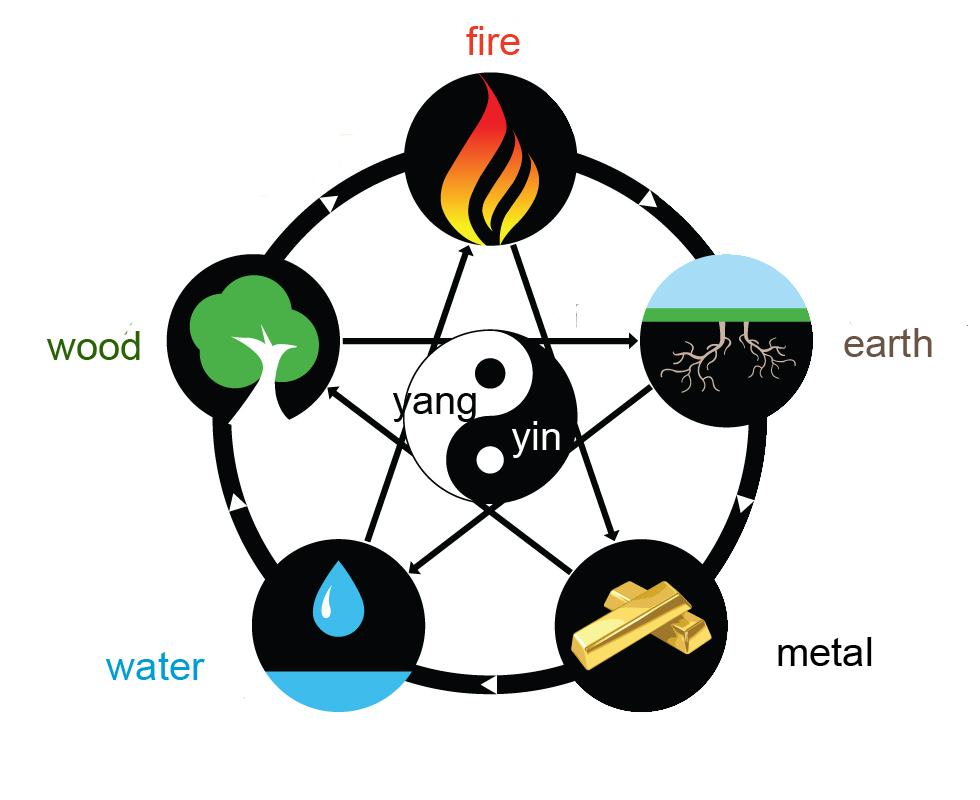 Unity of Man and Nature: this philosophical thinking suggests that people’s diet should be adapted to the natural environment which they are living in. For example, people who live in a damp environment should eat more hot and spicy food which can help to release the dampness. 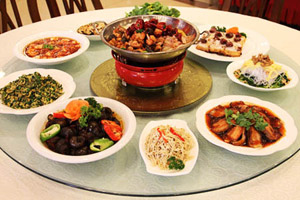 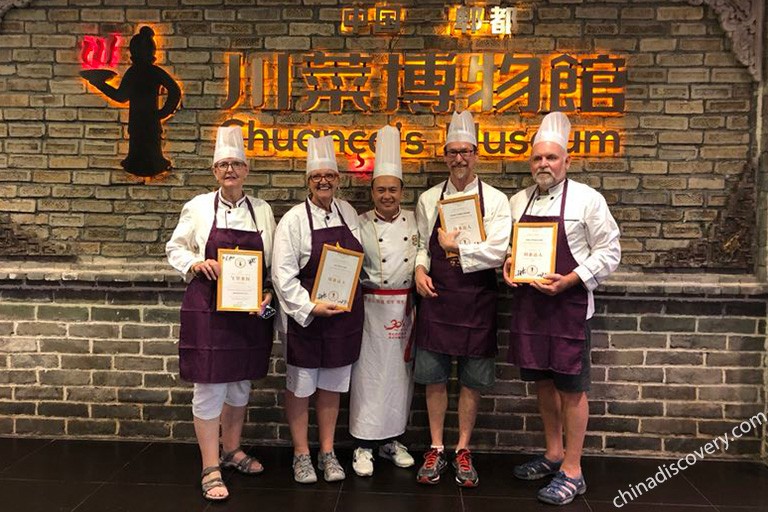